Crossing Paths with the Pallas’s Cat in the Trans-Himalaya

A dream, a pursuit, and finally, an encounter with the fabulous, fuzzy ribilik on a rocky outcrop near Hanle in Ladakh

Text and photos by: Surya Ramachandran

Text and photos by: Surya Ramachandran

In August 2012 on my first day as an intern at Forsyth Lodge in Satpura National Park, I opened Indian Mammals: A Field Guide by Vivek Menon and entered the exciting world of Indian natural history. As with most beginners, I was glued to the pages on cats, clueless then that 15 species of wild felids exist in India. The smaller cats I’d never heard of before caught my attention immediately: golden cat, marbled cat, and rusty spotted cat. But one image stood out. It was the Pallas’s cat (Otocolobus manul), a strange looking creature from Ladakh, photographed by the German naturalist Otto Pfister. It took me a while to get the pronunciation right (both cat and photographer). When I asked my colleagues and mentors about the Pallas’s cat I was told: “How many tines does a spotted deer have? Learn that first”. I followed that advice and delved into the world of Central Indian wildlife. My time in Satpura and Kanha brought me close to many mammals that had piqued my curiosity when I had first opened India’s mammal bible. I saw tigers, the rusty-spotted cat, jungle cat, leopard cat, civets, otters and more. I was hooked. In 2017 one of my dreams came true when my colleague and friend David Raju and I brought out Wildlife of Central India: Photographic Field Guide our guide to Central Indian wildlife. 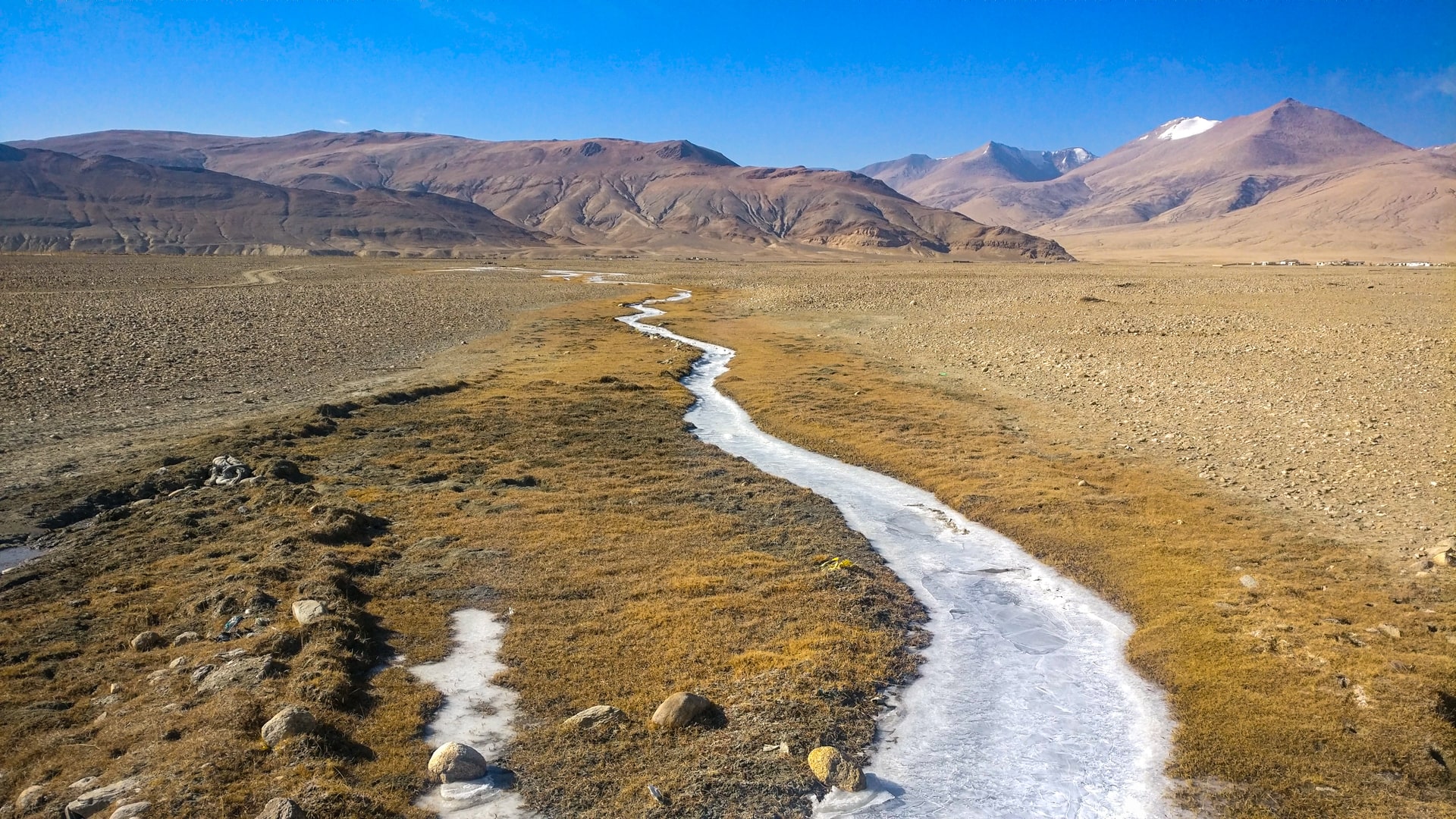 In early 2017, after six years in Central Indian forests, I accepted an offer to run the Snow Leopard Lodge in Ulley, Ladakh. The company I joined gave me a few months to travel and familiarise myself with the Trans-Himalayan wilderness and the Ladakhi way of life. In this, David Sonam of Leh and Dr Tsewang Namgyal of the Snow Leopard Conservancy among many others helped me. I travelled through the region encountering ungulates, wolves, foxes, snow leopards, brown bears, pikas, voles, and unique avifauna. I once spent 20 minutes observing the elusive Eurasian otter hunting in the blue waters of the Indus. One of these exploratory visits, in search of Tibetan lark, Tibetan gazelle and raptors, took me to Hanle village, close to the eastern limit of the Changthang Plateau. David Sonam had told me that the Pallas’s cat (ribilik locally) had been reported a few times around Hanle. With this exciting information, my driver, spotter, and friend Stanzin Namgail and I had high hopes while scouring the length and breadth of the frozen marshes and hills around Hanle. While we saw other creatures, unfortunately we didn’t find my cat. Sonam Dorje of Padma Homestay, a self-taught birder and naturalist of the region, tried helping us in the search, but we had to abandon it after a few days. I would have to wait. 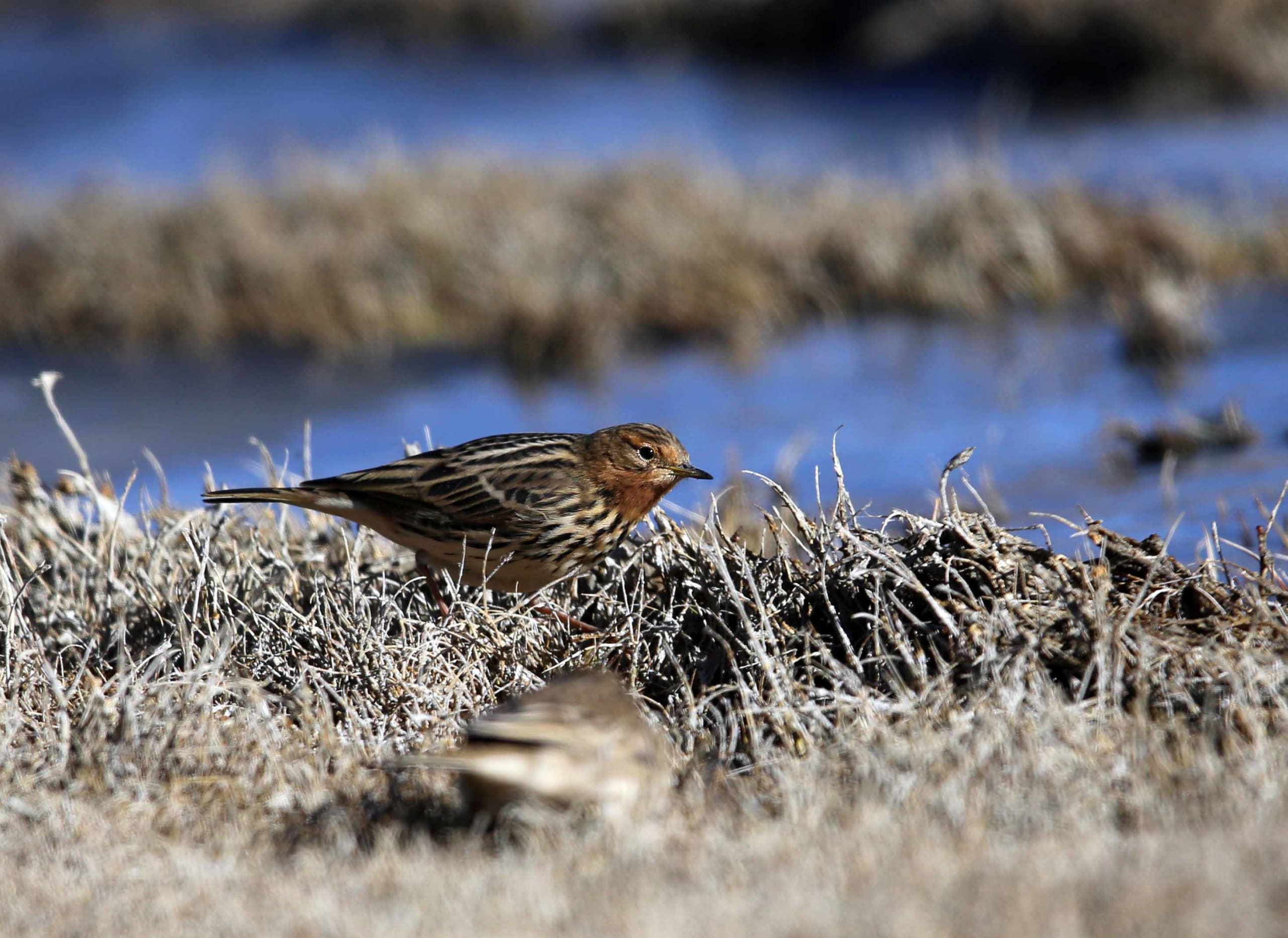 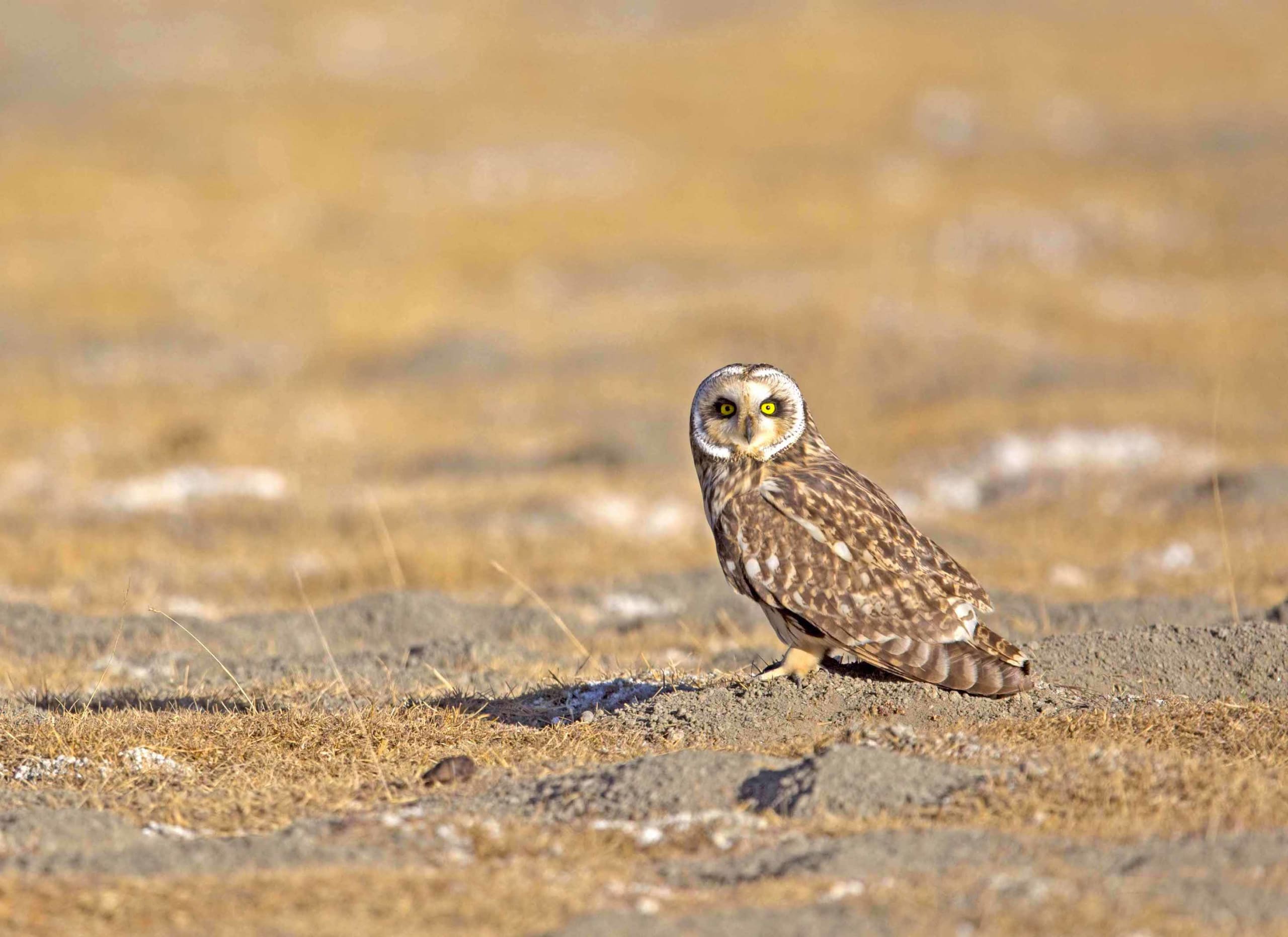 In November 2017, as the winter temperatures started to dip in Ladakh, I escorted a Wildscapes photographer who wanted to capture the rising full moon with wildlife in the frame. After much research I came up with an option: the Kalak Tal Tal plateau near Hanle. After a few days of acclimatisation, we (along with our driver Stanzin, and Abhishek Gulshan, a birder and friend from Delhi) drove towards Hanle using the route via Pangong Lake, where we halted for the night. The next day’s drive was only 160 km, but it took us eight hours, thanks to a combination of photo op stops, bad roads, and the movement of large herds of pashmina goats with their Changpa herders. We encountered rare birds such as the merlin, red-throated pipit (above left), sandgrouse, saker falcon, and herds of kiang and bharal on the barren slopes and rocky cliffs of Changthang’s cold desert.

On reaching Hanle, our host Sonam Dorje caught me by surprise when said, “Ribilik is baar mil jayega” (you will see the Pallas’s cat this time), even before the customary “julley” or hello. Sonam described various encounters he and his friends had the previous week and showed me a few images taken the day before. A Pallas’s cat had taken up residence in a rocky outcrop above the Hanle marshes and all the week’s sightings had been in and around that magic spot. The next morning, we were up early, chasing the setting moon around the marshes of Hanle. As we were driving around, our vehicle headlights caught a furry animal walking on a mound for a second before it disappeared. I was convinced that was the cat I had been waiting so long for, but the others thought it was a fox. Perhaps my excitement was getting the better of me. 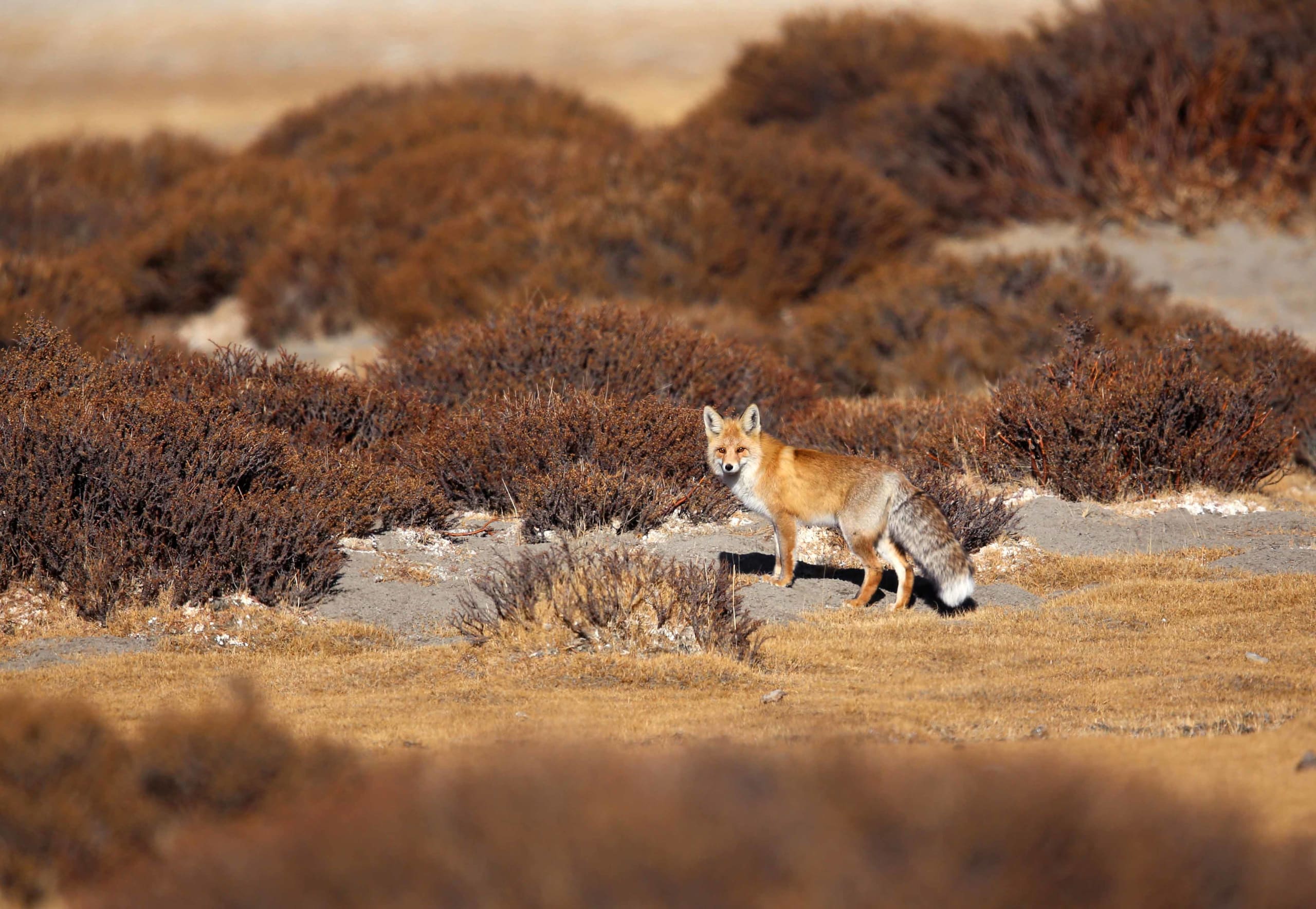 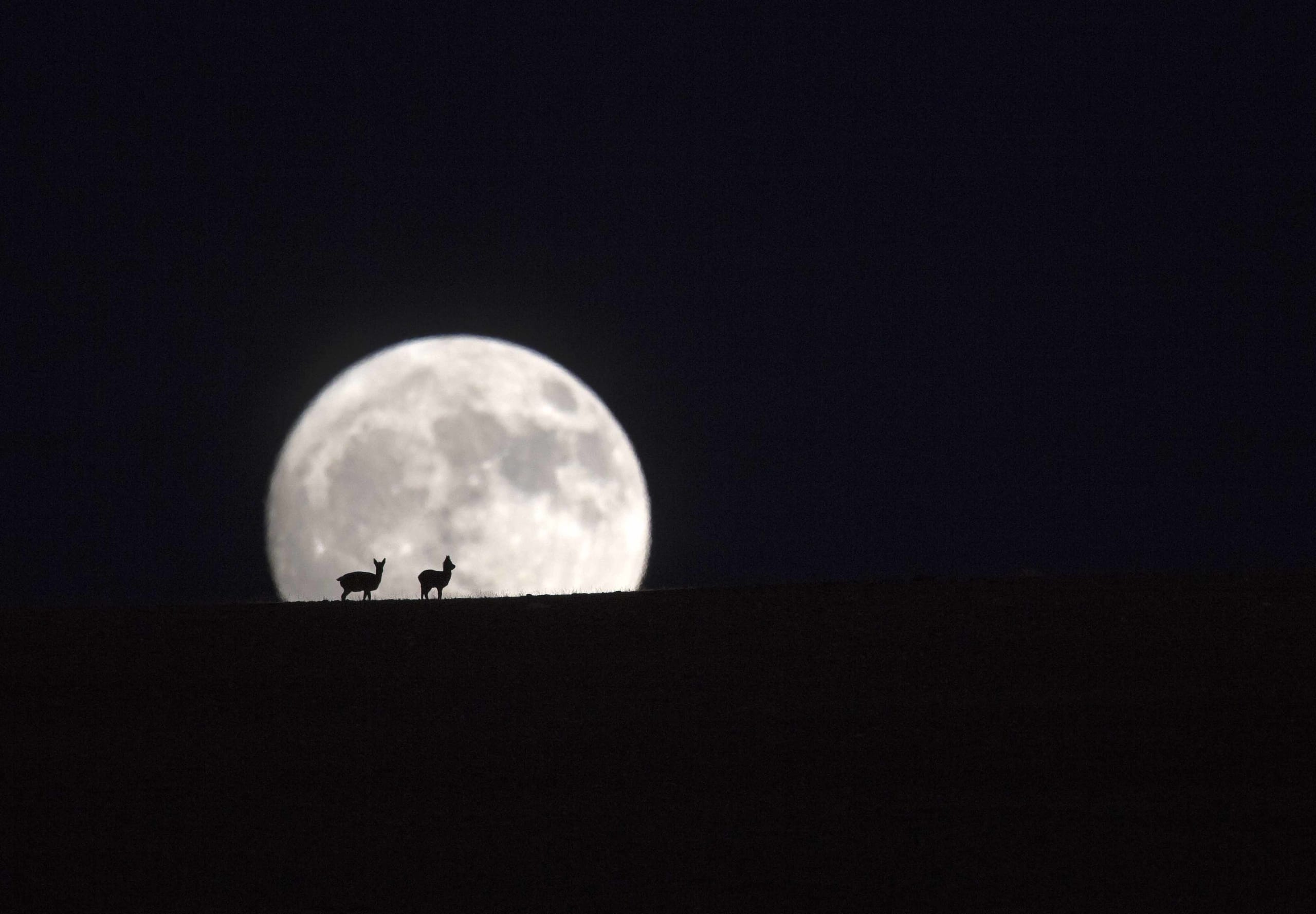 Once the sun came up, we visited the magic rock and spent half an hour scanning every single crack and crevice. To my disappointment, there was no cat around. Just a few dogs that had cornered a red fox on top of the rocks (top) and an upland buzzard interested in a vole emerging from a burrow. We moved on to Kala Tal Tal plateau to recce a location for the evening’s moon shot and found a flat spot atop the plateau perfect for the photographer’s quest. That night was perfect, and the photographs captured are among the best I have seen in the wilderness. Here is one I took of Tibetan gazelles against full moon (above).

On our last full day at Hanle, I skipped the morning moon chase and walked towards the special rocky outcrop, the home of our elusive ribilik. It was a long walk that started in the dark, made longer by frequent stops to scan the marshes for movement of any fur balls in the twilight. We finally approached the rock and after ten minutes of scanning with binoculars it was clear that the cat wasn’t going to show up there. We walked a wide loop around the marshes to the other side of the mound with smaller caves and scanned the cracks and dark holes. In one of them we saw a white shape, but the low light didn’t give much away. Boosting the ISO on my camera, I clicked away hoping to get a better picture. Zooming into the first image I saw that the white shape had two eyes, a mouth, whiskers, and dark streaks on its cheeks. I had found my cat, the ribilik, the Pallas’s cat!

I almost yelled out in excitement but thankfully the cold got the better of me. We spent the next 30 minutes watching the cat from a distance. After the initial few minutes, it left the cave and walked to the top of the rock to warm up in the sunshine. None of the images or videos I had ever seen of this cat prepared me for what I saw next. All I had seen till that moment was the head. But now, a small ball of greyish-brown fur was moving in the most amazing manner. There were no legs seen as the long fur touched the ground on either side and its pace was slow and smooth — almost like a fat millipede. Finally, after a long stretch of time, the ribilik reached the top of the rock, showing its full form with the rising sun lighting up its fur. It was a sight to behold and no photograph can do justice to what unfolded in front of us. Through the day, the cat popped in and out of its den, giving us multiple sightings, sunning and preening itself in the open, while staring out into the vastness of its kingdom from his rocky throne. The horned larks were the only living things around that seemed to hate the presence of the cat and became agitated every time it showed itself, sometimes even diving close to its head, perhaps to irritate it. 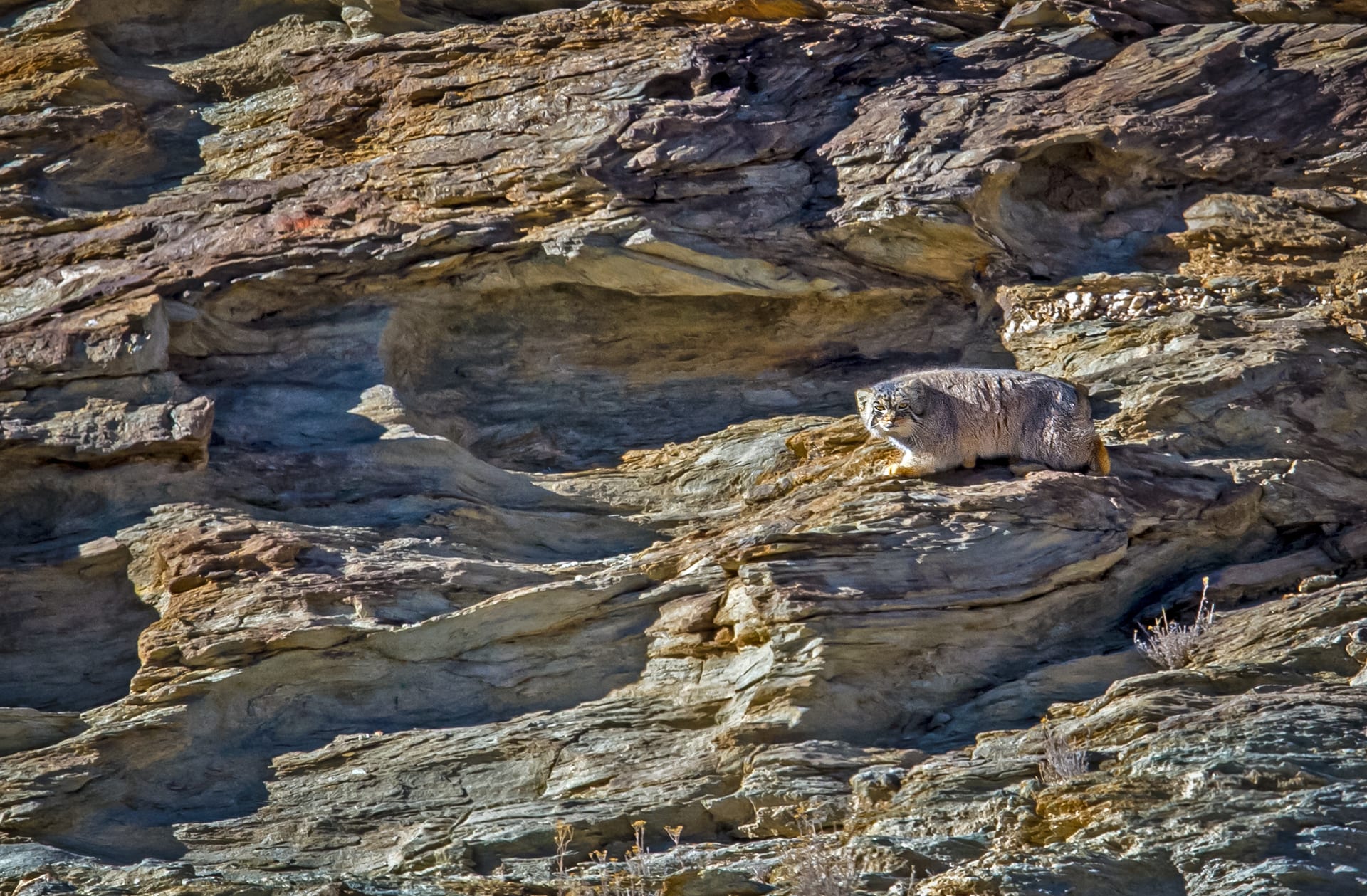 That day, we were joined by ace filmmaker Sandesh Kadur, who was also there to try his luck with this elusive cat of the Trans-Himalaya. He managed fantastic footage of the cat through the various sightings that day. However, we did not observe much behaviour, except when the cat deposited its scat. Sandesh told us that just like the rhino’s midden, its scat served as a tool of communication. He also enlightened us on other aspects of the cat’s behaviour learnt from past encounters and through his friends working in the Mongolian steppe. The data on the Pallas’s cat in India is limited. Most of the scientific data comes from the Central Asian steppe of Mongolia. I later learned from the Snow Leopard Conservancy that these cats had been recorded at multiple locations around Ladakh, always around marshes or lakes above a particular altitude. Camera trap records and other habitat data collected by the Conservancy, coupled with the interest shown by locals like Sonam Dorje of Hanle, is the start to a more complete understanding and conservation of the fabulous ribilik of the Trans-Himalaya. 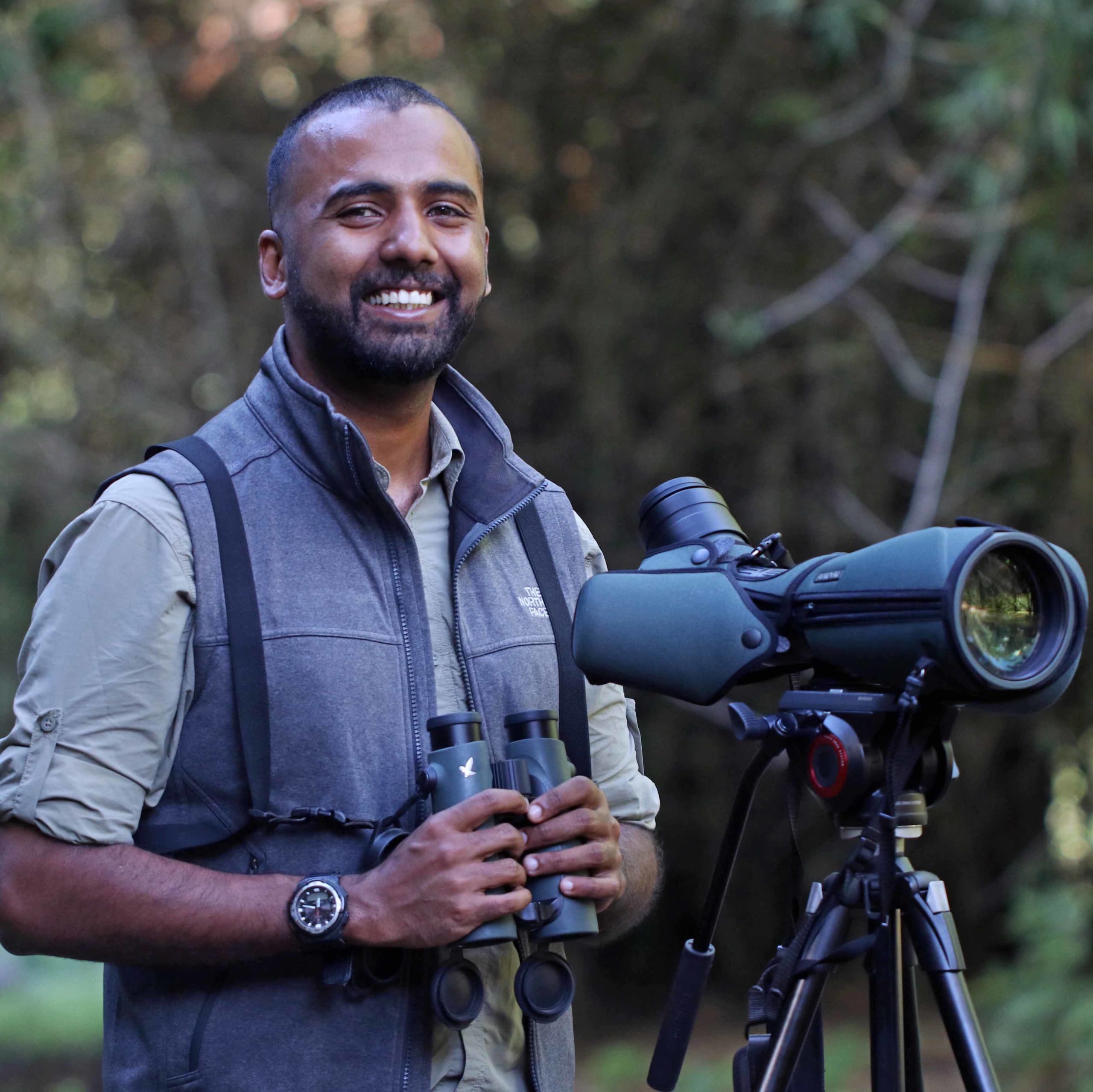 is an award-winning naturalist and has co-authored Photographic Field Guide: Wildlife of Central India. He currently lives in Ladakh and moves to Nilgiris during the Monsoons.