Pallas’s fish-eagle, osprey, and peregrine falcon are just some of the numerous species of raptors found in India that have adapted, in varying degrees, to live and hunt by waterbodies

Text and photos by: Shreeram MV 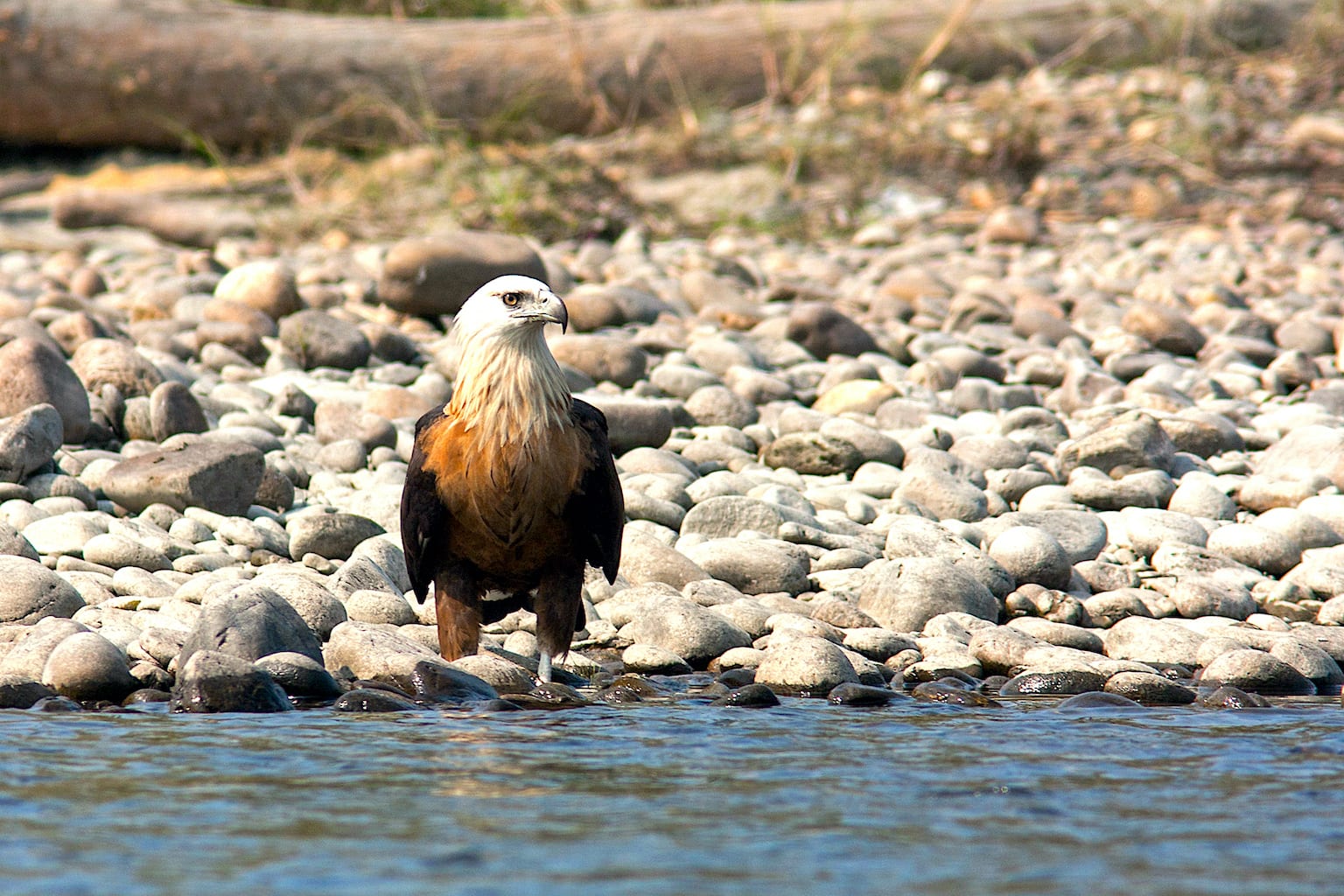 The stillness of the evening is broken by a sudden splash in the river. A hapless fish struggles in the strong talons of an osprey. The bird pulls itself out of the water and flies away with its meal. In a lake not far away, hundreds of ducks take to the air, splashing water all around. Gliding above them is a lone marsh harrier, looking for a snack before it settles for the night.

Raptors are birds of prey at the apex of the avian food chain. Five families of birds in India can be classified as raptors, including Falconidae (falcons) Accipitridae (eagles, buzzards, kites, harriers, vultures, etc), Pandionidae (osprey), Tytonidae (barn owls) and Strigidae (typical owls). The incredible variety of habitats across the country allows a great diversity of raptors — over 110 species — to be found across India. We have raptors in the mountains, in the dry plains, along our coasts and islands, in rainforests, and even in our deserts.

Some raptors have adapted, in varying degrees, to live and hunt by waterbodies. Their menu includes fish, birds (like ducks, coot, geese, waders, and sometime even flamingos), and other freshwater and aquatic life, among other things. They are found along tiny forest streams, mighty rivers, small ponds, marshes, large lakes, and along the coastline. When there are fishing communities nearby, some of these species have also adapted to picking off the discarded fish from boats and scavenging on leftovers.

The sobering news is that their very dependence on water might become their undoing. Pallas’s fish- eagle is an endangered species, with an estimated global population of 1,000-2,499 birds. Lesser and grey-headed fish-eagles seem to be following the trend and are classified as “Near Threatened” species. Habitat degradation, loss of nesting trees, pollution, draining and overfishing of waterbodies — all anthropogenic causes — have led to the decline of these species.

Fish make up 99 per cent of an osprey’s (Pandion haliaetus) diet, making it completely dependent on waterbodies. It has several adaptations that enable a fish-eating lifestyle: reversible outer toes, prickly soles, and backward-facing scales on its talons that help hold fish in place. When it hunts, it dives head-first into the water with wings closed and can close its nostrils to keep water out. Dense, oily plumage helps waterproof its feathers to some extent. Ospreys are found all over the globe and are the second-most widely distributed raptor species after the peregrine falcon. On the Indian subcontinent they are mainly winter visitors. Across India, they are found around large waterbodies including rivers. Some records indicate a few birds spending the summer at inland waterbodies in Karnataka.

Brahminy kites (Haliastur indus), with conspicuous chestnut wings, are a common, striking presence near waterbodies, flooded areas, and even inundated agricultural fields. They are widespread residents around coastal fishing villages but are also found inland through peninsular, central, and northeast India. Their diverse diet includes small fish (caught on the water’s surface), frogs, crabs, lizards, snakes, insects, and birds. Like black kites, they may scavenge near human habitation. 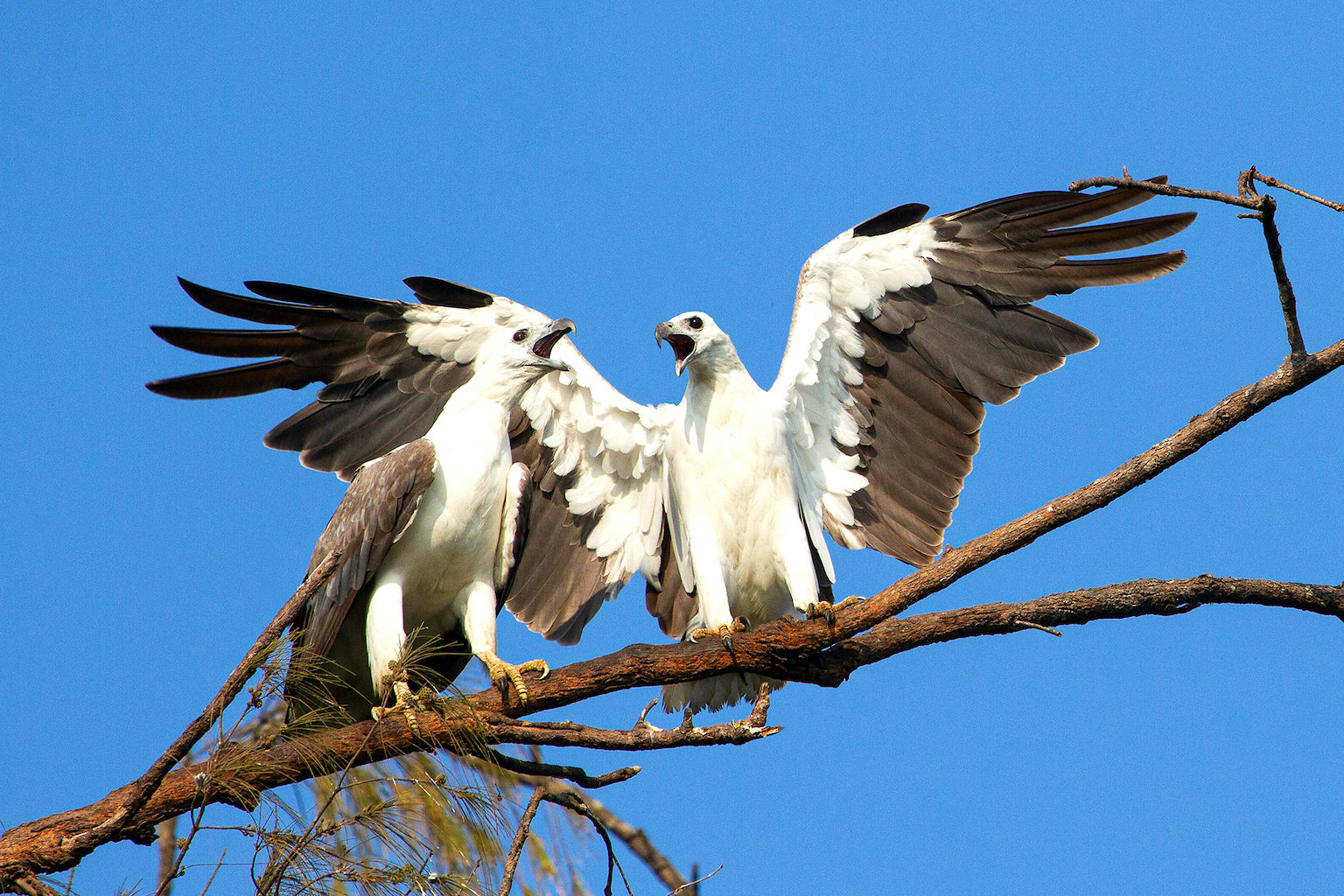 The white-bellied sea-eagle (Haliaeetus leucogaster) rules the coastlines of South Asia, Southeast Asia, and Australia. An entirely white underbody, massive wings (held in a V-shape when gliding) and loud honking calls make it unmistakable. It mainly hunts aquatic animals such as sea snakes, turtles, and fish from near the surface, but is also a known kleptoparasite, stealing food from Brahminy kites, ospreys, gulls, and other white-bellied sea-eagles.

The white-tailed eagle (Haliaeetus albicilla) is the largest eagle species in India (immature bird pictured here). It is a rare winter migrant to waterbodies across the country, though a few birds have also been recorded scavenging along with vultures and other eagles at Tal Chapar Sanctuary and Bikaner, Rajasthan. Its white tail is a definitive indicator of the species.

The endangered Pallas’s fish-eagle (Haliaeetus leucoryphus) lives in north and northeastern India. In addition to the fish it picks off the water’s surface, this mighty eagle hunts waterbirds like geese, ducks, coots, and demoiselle cranes, as well as young ibises, openbills, darters and terns from heronries and nesting sites. This is a heavyweight lifter of the avian world and has been recorded flying and carrying adult greylag geese and huge carp fish twice its weight. Like other fish-eagles, birds mate for life and build on the same nest over multiple years. Their nests sometimes get so big that they tower over the eagles.

(Top) The lesser fish-eagle (Haliaeetus humilis) is amongst the smallest of the sea/fish-eagles of the genus Haliaeetus and is resident in southwest India and the Himalayas. Both this eagle and the grey-headed fish-eagle (Haliaeetus ichthyaetus) have recurved talons and prickly soles that help them with their largely piscivorous (fish-eating) lifestyle. (Above) Grey-headed fish-eagles are widely distributed across southwest, central-north and eastern India. The black-and-white bands on their tails distinguish them from the lesser fish-eagles’ all-black tail. 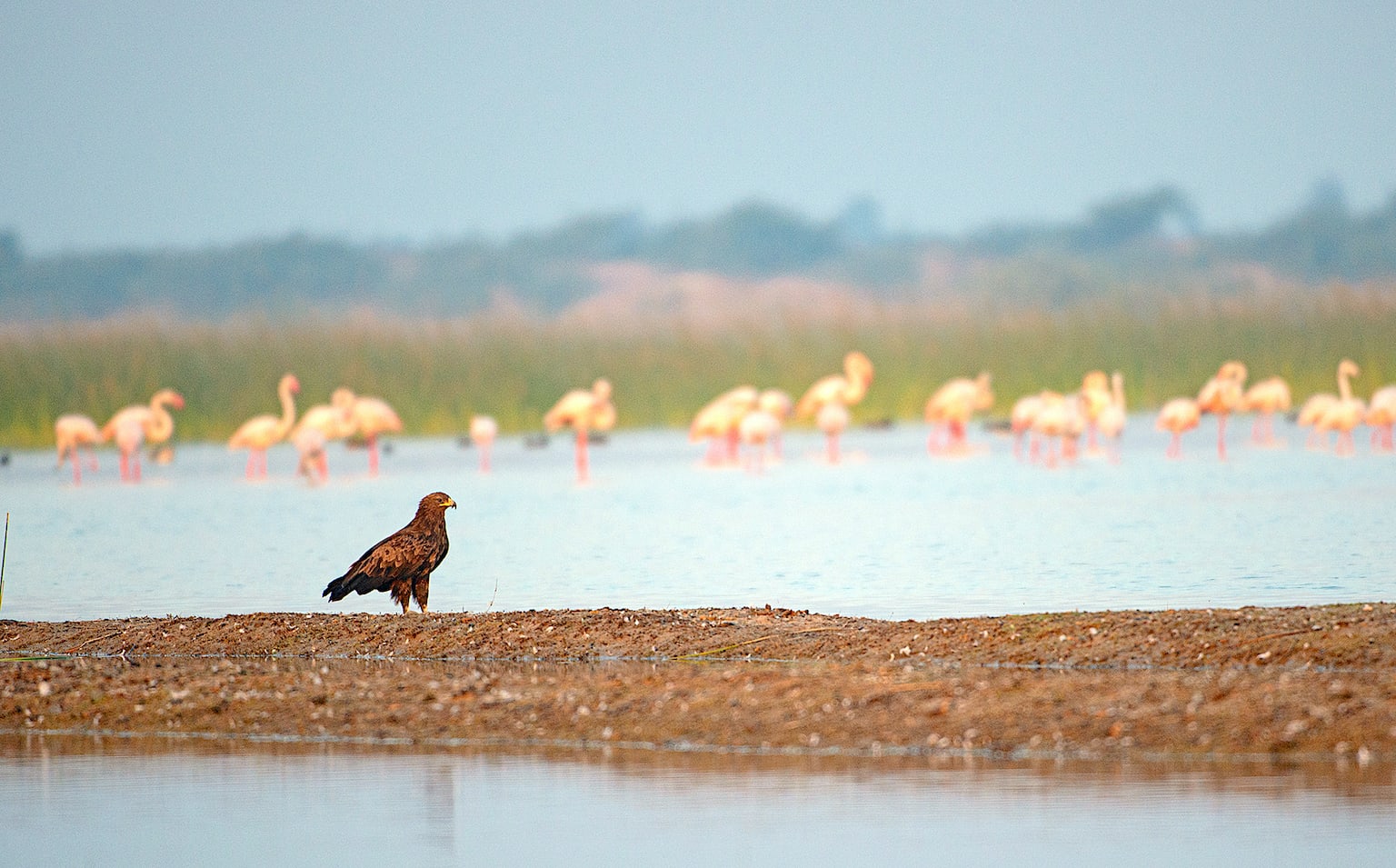 Unlike the similar-looking Aquila eagles and the related Indian spotted eagle, greater spotted eagles (Clanga clanga) inhabit marshes and waterbodies, and winter all over the northern Indian subcontinent. They are known to be long-distance migrants. A 1993 study tracked an eagle that migrated 5,536 km from Yemen to western Siberia, clocking up to 280 km on a single day! Their diet includes waterfowl, frogs, fish, and reptiles.

The migratory subspecies of the peregrine falcon (Falco peregrinus calidus) is the fastest flying bird in the world. It follows its primary food — migratory waterfowl — to a wide variety of waterbodies around the country. This falcon usually hunts mid-air, swooping down vertically at great speed, striking its quarry, and often flying away with it before the hunted bird hits the ground. It is often solitary in winter, and is normally active at dawn and dusk preferring to rest in the shade through the day. 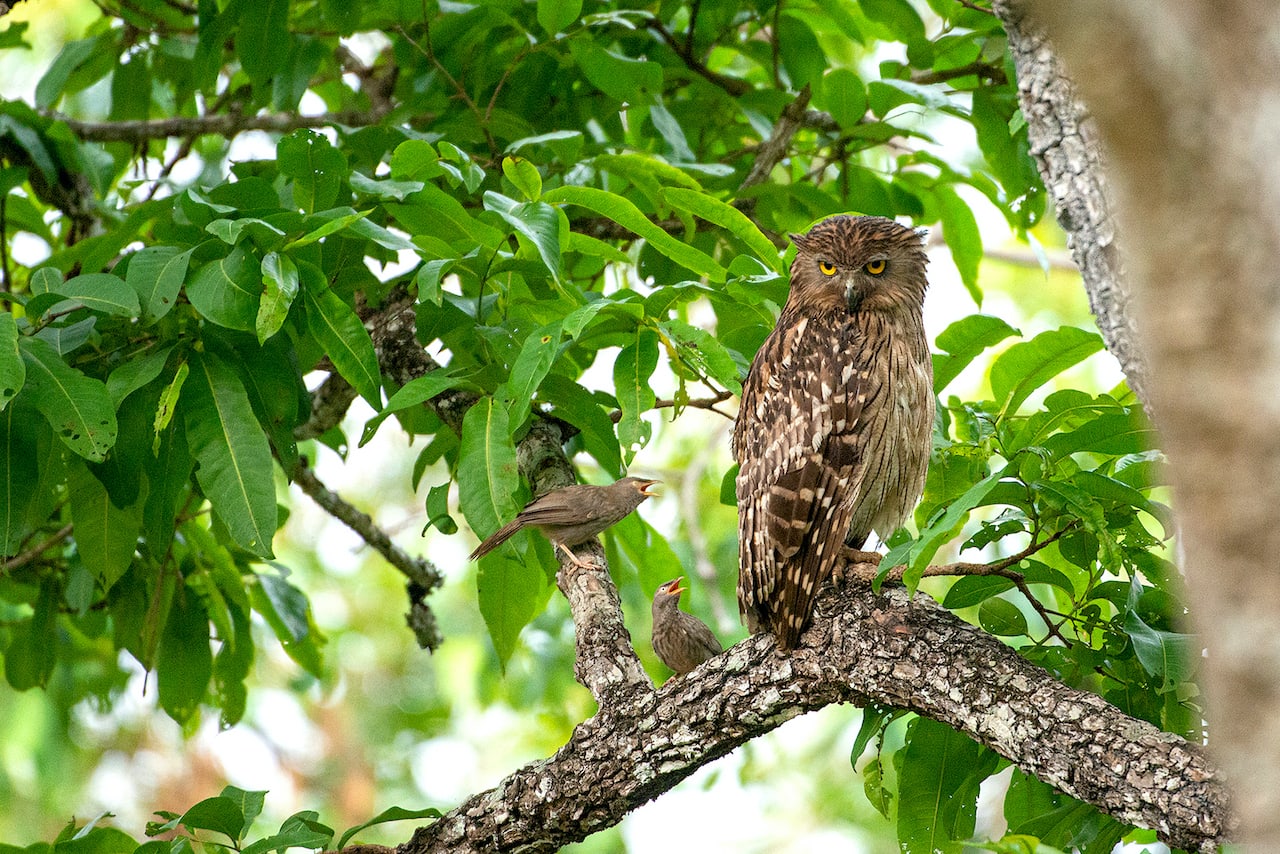 India has three species of fish owls: (pictured here) brown fish owl (Ketupa zeylonensis), buffy fish owl (Ketupa ketupu), and tawny fish owl (Ketupa flavipes). These large birds are found close to waterbodies in forests, where they often scoop fish from the water’s surface. Adapted to a fishing lifestyle, they have long legs and a rougher texture at the bottom of their toes compared to similar-sized eagle owls. In addition to fish, they feed on frogs, crabs, small reptiles, mammals, and birds. The brown fish owl “is fond of bathing and will waddle into the shallows at the edge, shuffling itself in the normal manner of birds, thereafter drying and carefully preening the plumage” according to Salim Ali and S. Dillon Ripley in their famous book, Handbook of the Birds of India and Pakistan. Brown fish owls are found across the Indian subcontinent, while tawny fish owls are seen in the Himalayas and Northeast India, and buffy fish owls are limited to the Sundarbans. 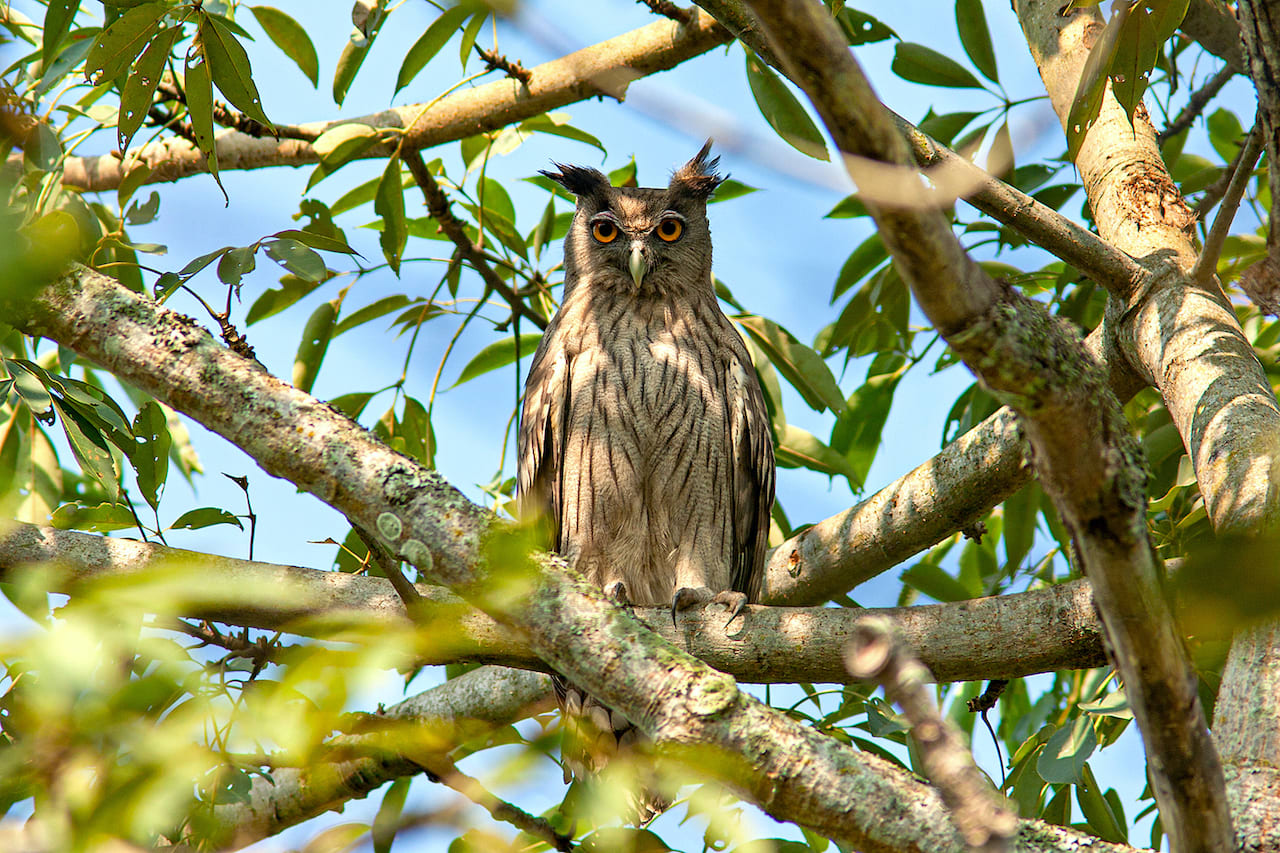 Dusky eagle owls (Bubo coromandus) inhabit well-wooded areas and groves near waterbodies. A pair may inhabit the same area for many years. Usually nocturnal, the birds sometimes hunt during the day in cloudy weather. In addition to frogs and fish, small mammals, birds, reptiles, and large insects (like water beetles) are on its menu. 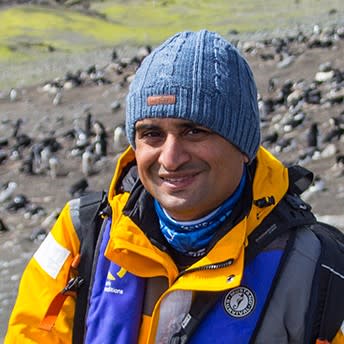