These magnificent air-breathing reptiles have lived on earth for millions of years. Four of the seven known species of sea turtles nest in significant numbers on the Indian coastline and its outlying islands.

Text and photos by: Umeed Mistry 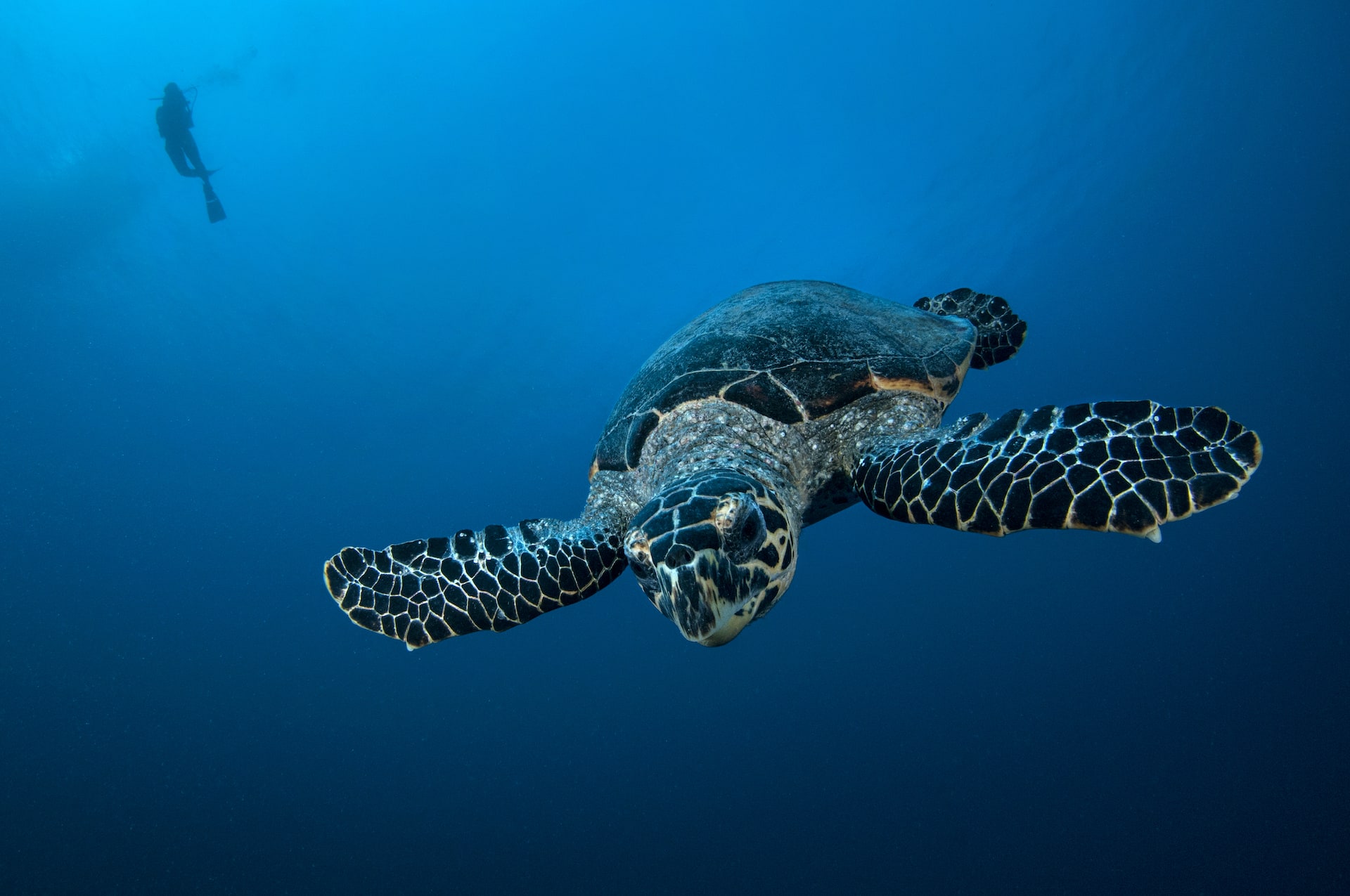 Of the five species of sea turtles found in the Indian Ocean, four nest in significant numbers on the coastline of India and its outlying islands. The loggerhead turtle, while a frequent enough visitor to Indian waters, has its largest regional nesting grounds in Oman.

The Indian Ocean leatherback population nests in the Andaman and Nicobar Islands, south of the Bay of Bengal. Lakshadweep has a robust population of green turtles. And hawksbill turtles can be found on many offshore reefs across the subcontinent and its islands. Though olive Ridley turtles can be found in many locations across India, the largest number of them head for Odisha every year, where the females then come ashore to nest in the largest arribadas in this part of the world.

Being air-breathing reptiles, turtles need to interrupt their foraging or cleaning routines on the reef to regularly visit the surface for air. Everything a turtle does underwater, it does while holding its breath. Sleeping is no exception. This green turtle often returns to the same spot on the reef every night. It tucks itself into a crevice and, holding its breath, falls asleep until it has to breathe again. During their daytime activities, green turtles can hold their breath for a few minutes at a time. The duration of breath-holding capacity increases significantly at night when physical exertion is at a minimum and their body’s oxygen requirement reduces.

Researchers studying eyesight in turtles have in some instances collected the eyes of turtles that are euthanized or have died in captivity. Microspectrophotometry reveals that sea turtle eyes have receptors with different visual pigments, suggesting their ability to see colours. Some findings also suggest the possibility of ultraviolet vision. Green turtles, like this one, rely heavily on sight and their eyes are adapted to shallow waters and brightly lit environments. 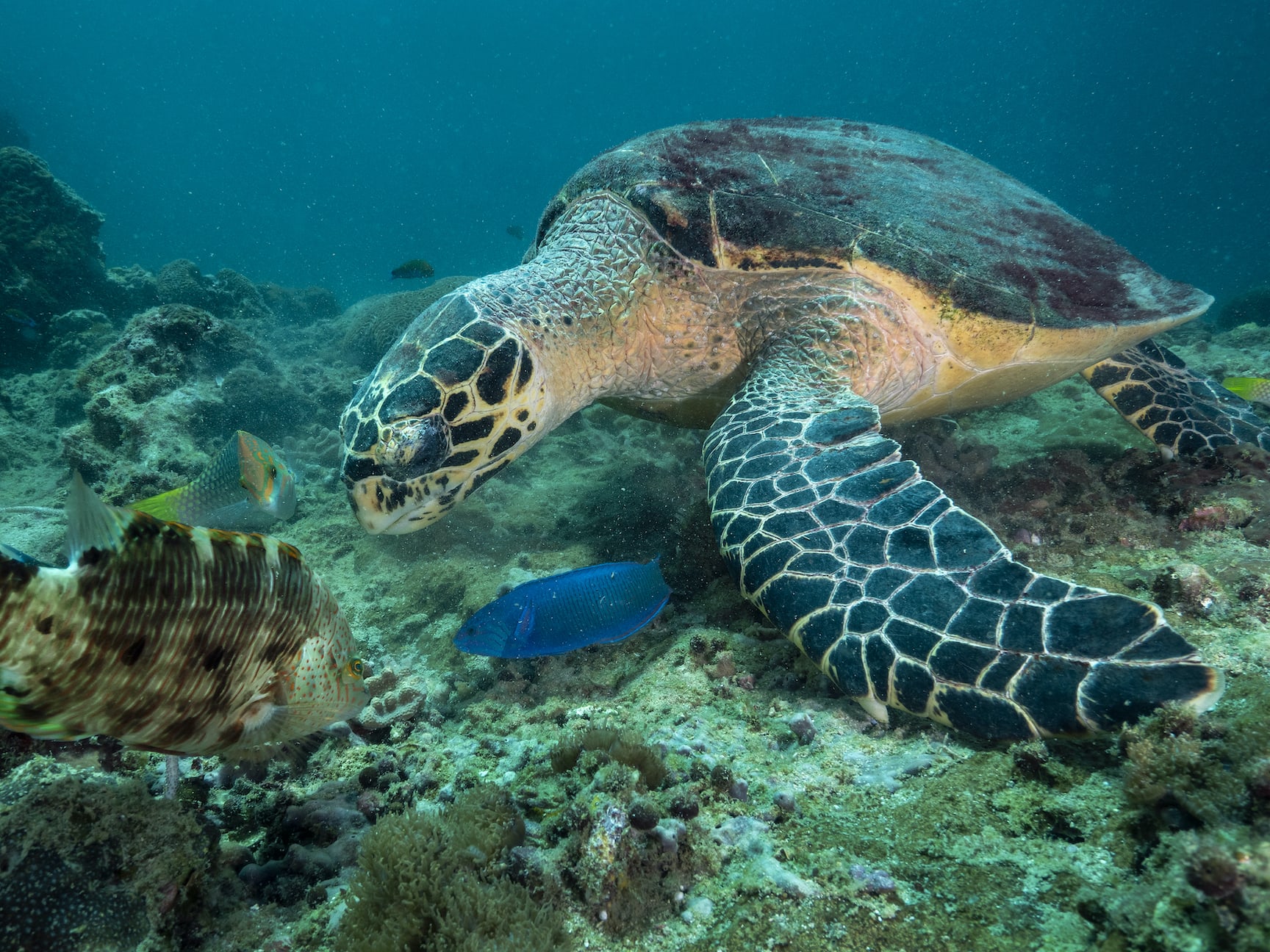 A hawksbill turtle forages for food on a shallow reef in the Andaman Sea. As the hawksbill tugs at the sponge that it is eating, it disturbs small crustaceans and worms living in the sponge and surrounding benthos (flora and fauna). These crabs, shrimp, copepods and other small invertebrates constitute the preferred diet of many reef fish, such as like these three kinds of wrasses.

Remora are fish that have developed an oval suction pad on their dorsal side, just above their heads. They are often seen fixed to larger marine creatures like turtles, whale sharks, manta rays and even whales. Food found in the stomachs of remoras suggests that they have either a mutualistic (in which both benefit) or commensal (where one benefits and the other is unaffected ) relationship with their hosts.

A female leatherback returning to the sea leaves a large track, which indicates her size. Leatherback turtles are the largest of the seven living turtle species on the planet. Adults average between 1.8-2 metres in length and can weigh a whopping 800 kilograms. Unlike other marine turtles, leatherbacks are able to regulate their body temperature and maintain a core temperature that is higher than the surrounding water. This ability, combined with their extensive covering of insulating tissue, large and flattened flippers, and hydrodynamic body, has allowed them to extend their range into subarctic regions of the world’s oceans.

At West Bay, on the western side of Little Andaman Island, this female leatherback turtle emerged from the water at 4 am and ended up staying on the beach well past dawn. Leatherback turtles like wide, gently sloping beaches where the approach isn’t too rocky. They make their nests above the high tide line where the soft, dry sand meets the first line of ipomea plants. This female was tagged after she started laying her eggs, which is the brief period of time when she focuses on nothing but the task at hand. 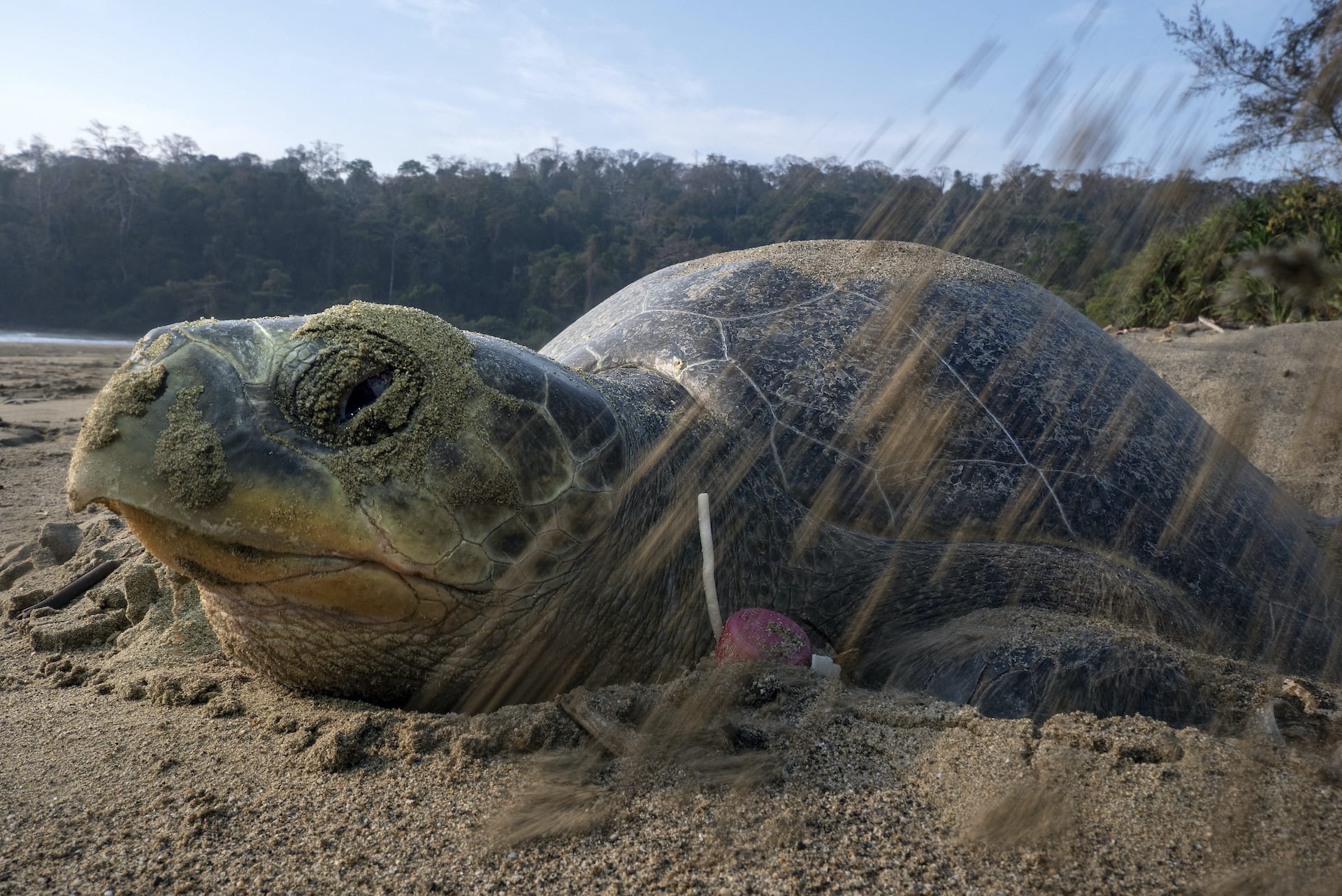 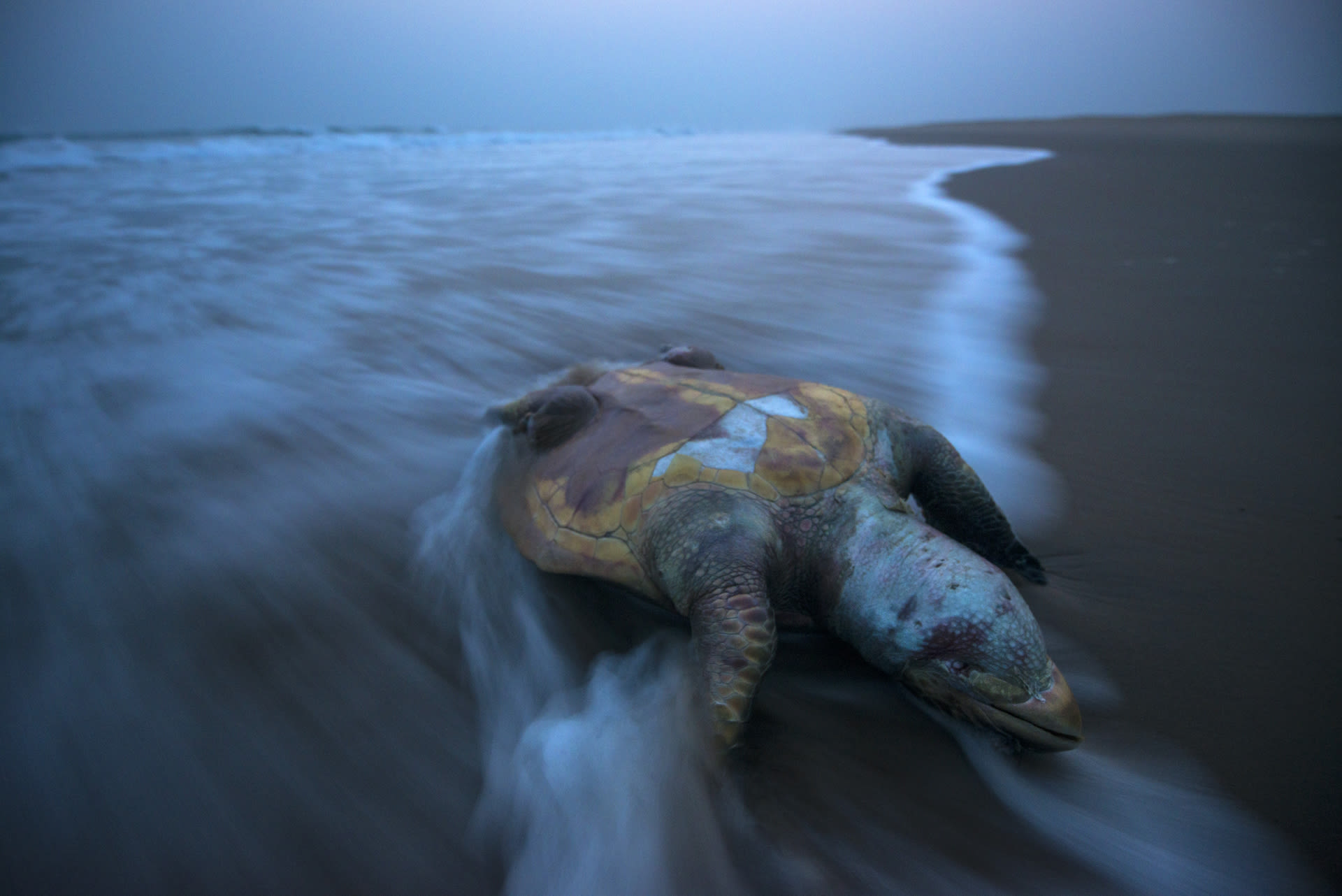 (Left) A female olive Ridley turtle sprays sand around herself as she uses her flippers to cover her recently laid eggs on a beach in the Middle Andamans. Sea turtles prefer to nest under cover of darkness. But hauling themselves up on land, across a wide stretch of beach until they have reached the high tide line, is an exhausting and ungainly task. For many females, the labour of finding the right spot on the beach, digging a suitable nest, laying a clutch of eggs, covering that nest with sand and returning to the ocean takes a long time. Some of them, like this female, end up finishing only after the sun has risen. (Right) Waves on the incoming tide wash this dead olive Ridley turtle further and further up the popular Chandrabhaga beach in Odisha. Many of the turtles that come here to mate and nest succumb to a variety of different manmade threats. This individual was most likely killed either by collision with a fishing boat, or by drowning after getting trapped in a fishing net. 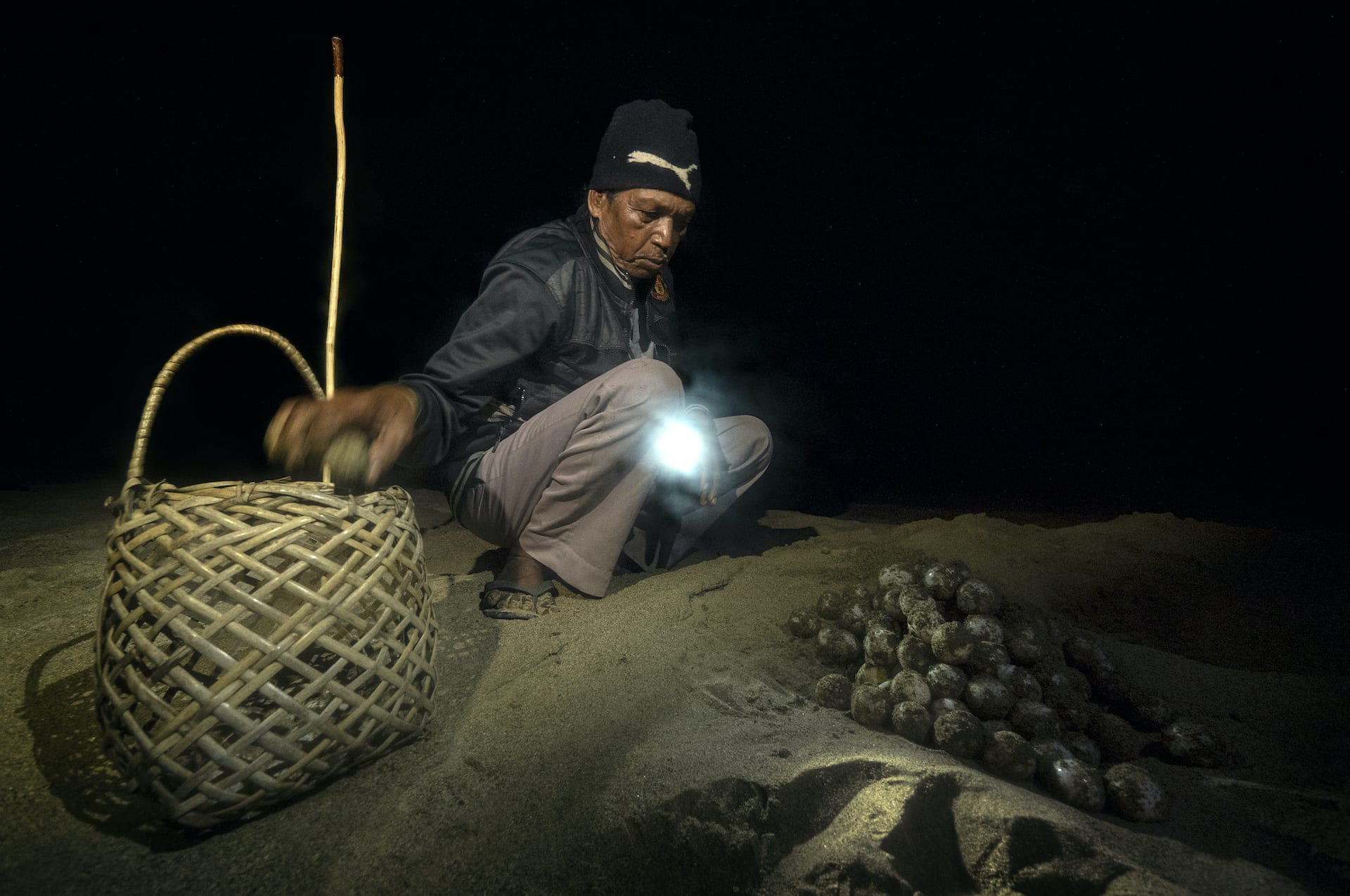 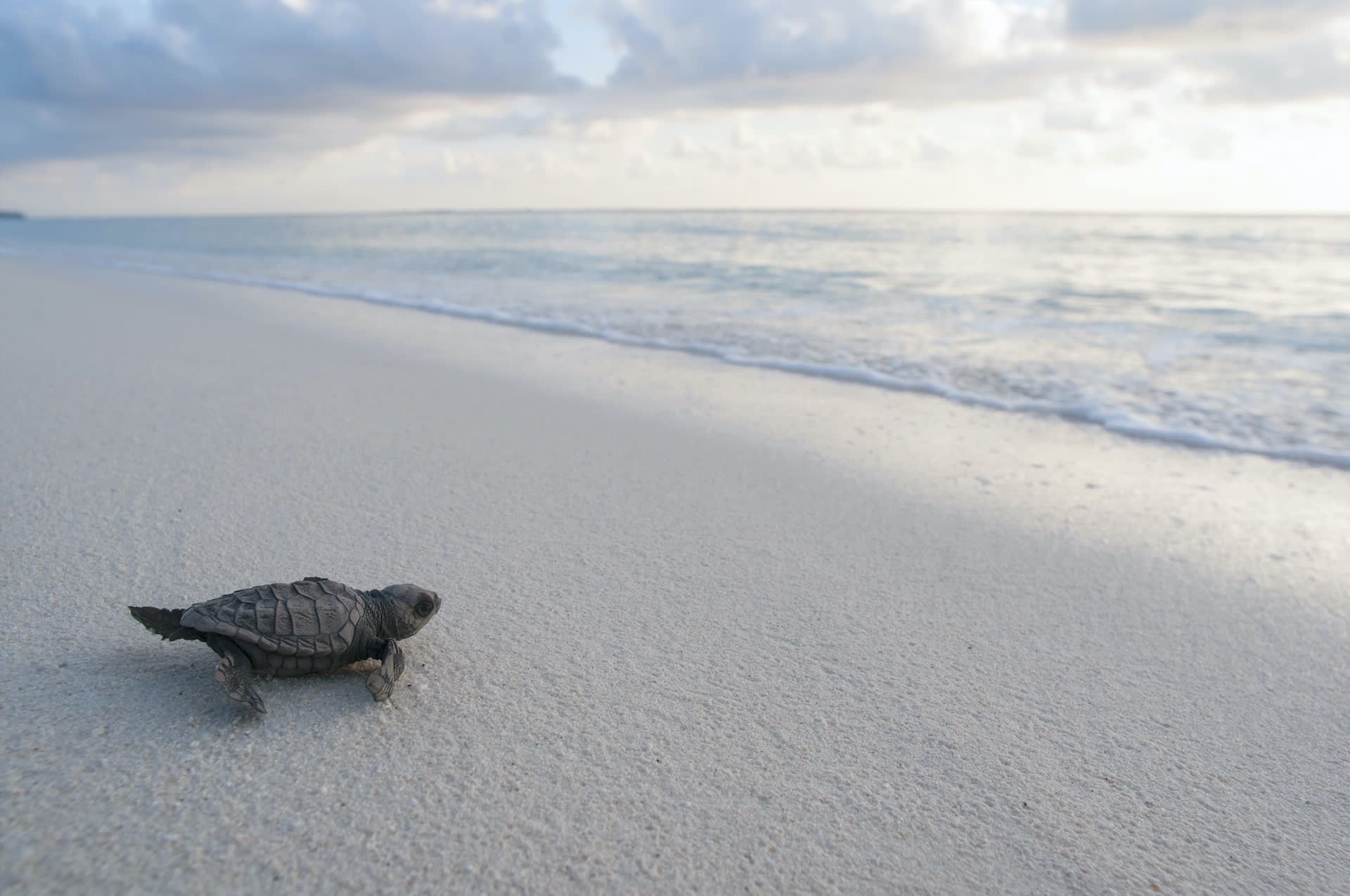 Turtle eggs are a source of protein. If they aren’t collected for consumption by human beings, or destroyed out of ignorance or mischief, they are sought out by feral dogs and a whole host of other wildlife. (Left) An employee of the Andaman and Nicobar Islands Forest Department digs up a recently laid olive Ridley turtle nest. He carefully transfers the eggs from the nest on the beach to the basket and will carry them back to the hatchery set up by the Forest Department for this beach. The tireless efforts of these men and women significantly increases the survival of the eggs and the emerging hatchlings. On a bright morning 50–60 days after their move to the hatchery, the hatchlings are released into the ocean. (Right) Near the southern tip of Kadmat Island in Lakshadweep a turtle hatchling pauses for a moment on its hurried dash to the sea. This stretch of sand can be one of the most dangerous places. Depending on where in India this might be happening, a number of different kinds of birds, crabs, monitor lizards, crocodiles and feral dogs, cats, and pigs make a quick meal of the hatchlings. Some estimates suggest that only 1 in 1,000 turtles makes it to adulthood. 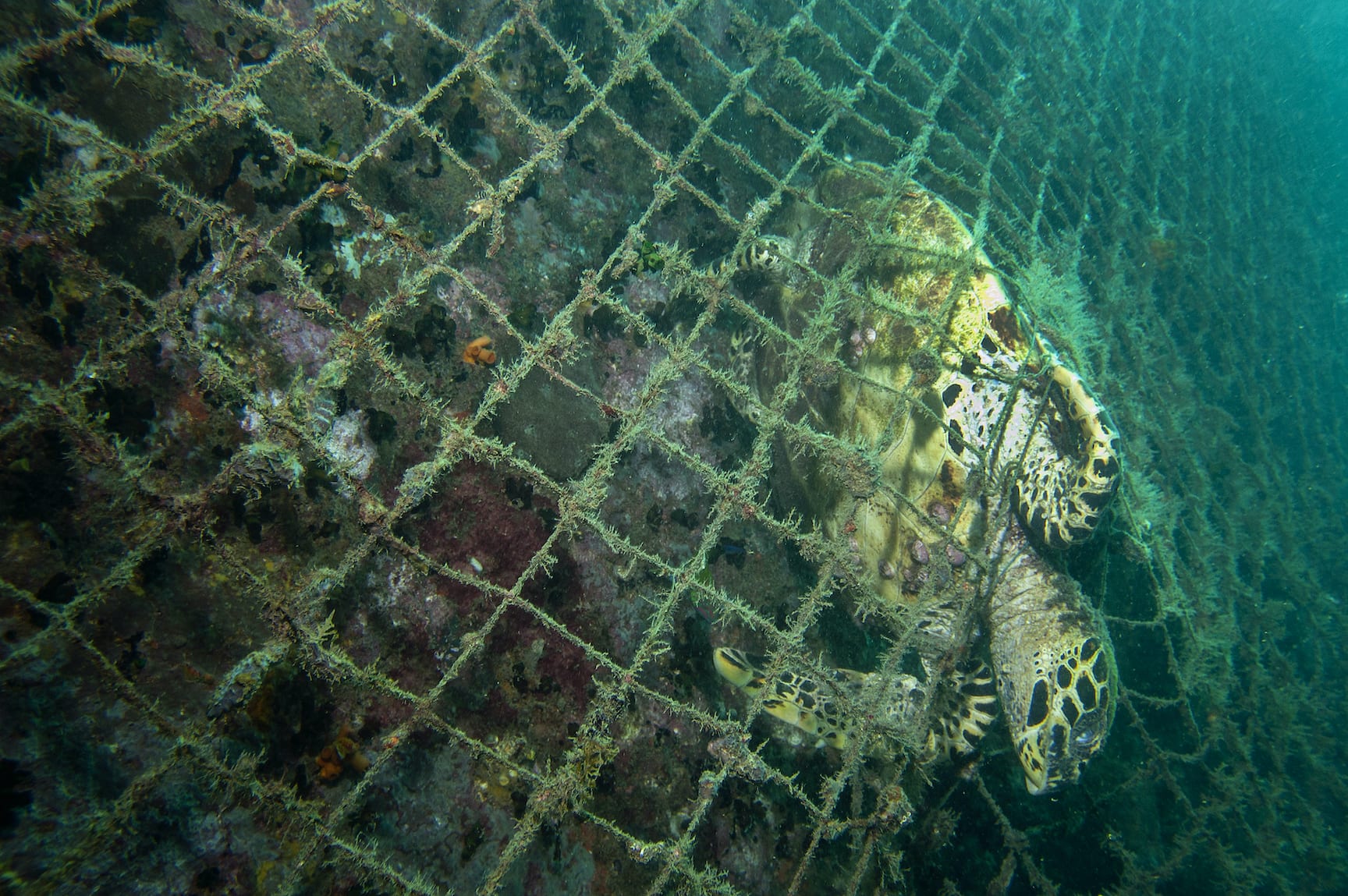 Marine debris like ghost nets are a major threat to all ocean life and can now be found across the globe. Ghost nets are fishing nets either lost or purposely discarded in the ocean. Discarded nets continue to do what fishing nets were invented to do — trap marine life. This hawksbill turtle got trapped between a shipwreck and ghost net that hung like a shroud over it. Despite being master breath-holders, this individual struggling to free itself must have drowned a few minutes later.

In places where they perceive human beings and boats as a threat, many turtles are wary of the surface. Ideally, an undisturbed turtle will exhale at the surface and sometimes spend a little while taking a couple of breaths before inhaling for its next dive back down to depth. But if chased or threatened, turtles will often delay their breathing and swim some distance away before surfacing. The best way to interact with turtles in their habitat is to slow down, give them room, refrain from touching them, and allow them to come in for a closer look if they feel the curiosity to do so. 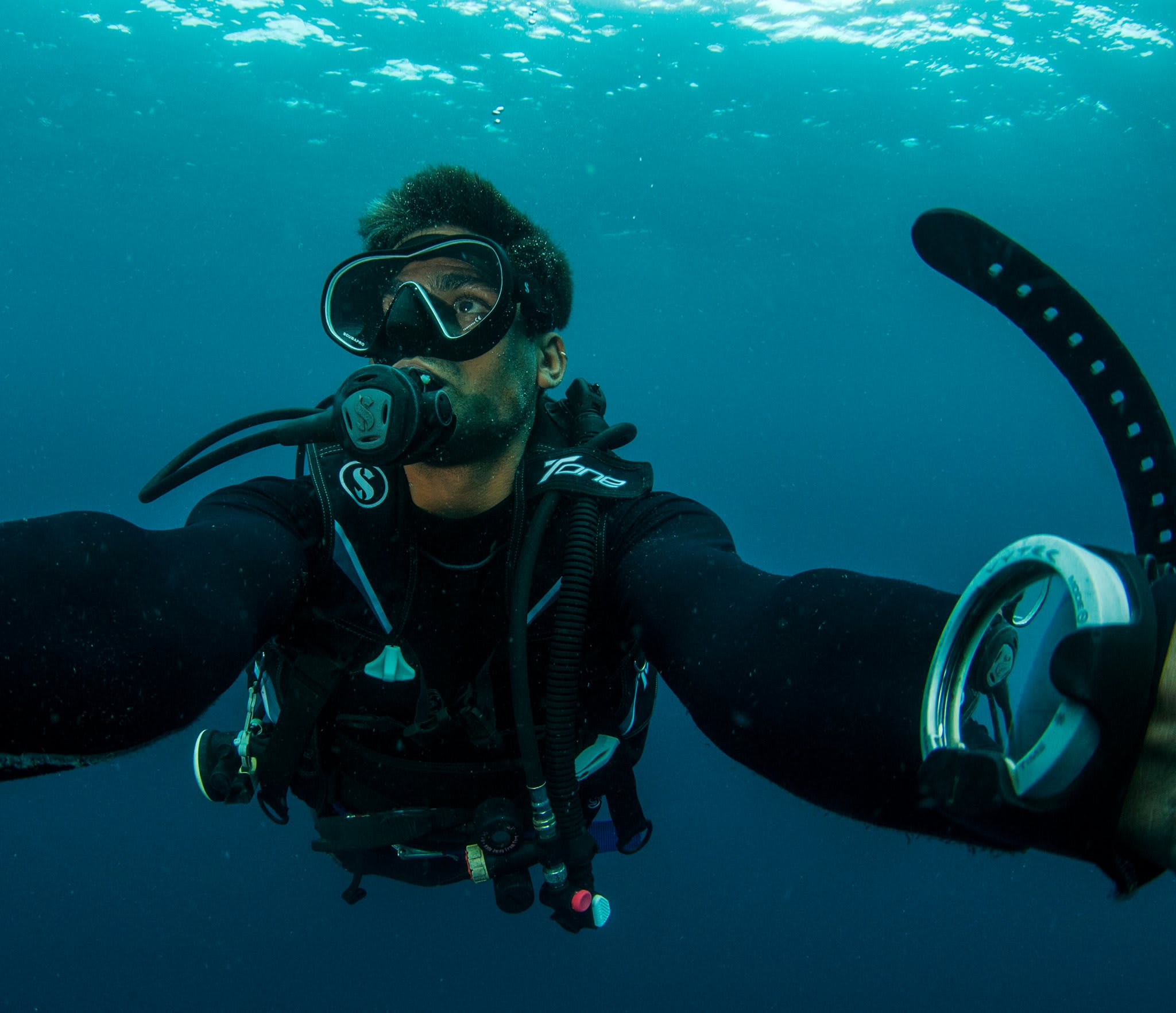