Tropical evergreen forests and Myristica swamps once cloaked this river’s landscape on its westward journey to the sea. The river’s rhythm, once decided by tides, is now interrupted by dams and a port built to serve people elsewhere

The Sharavathi is no ordinary river. Originating at Ambutheertha in Karnataka’s Shivamogga district at an altitude of 730 m, this river once flowed through some of the country’s finest wet, evergreen forests, plummeted off a cliff to form the famous Jog falls (253 m), spread through the coastal plains, and peacefully flowed into the Arabian sea at Honnavar. I say that in the past tense because the Sharavathi, like most rivers of India, has had its share of encounters with humankind. Some a mere blip, others not so harmless.

I was drawn to this river and its ecological history. Tropical, wet evergreen forests and the even rarer Myristica swamps once cloaked the Sharavathi landscape on its westward journey to the sea. Stretching on both banks, to higher plateaus and undulating hills, these forests were at the heart of the Western Ghats, hosting an incredible diversity of lifeforms, and also ancient kingdoms. The forests have been home to large numbers of the endangered lion-tailed macaques whose soft “coo” calls along with the sounds of Malabar whistling thrushes, frogs living in the canopy, and cicadas resonated through the wilderness.

Four hydroelectric dams have been constructed along the short 140-km course of the Sharavathi. These dams have silenced a river that was full of life. Everything that survives now, hangs on by a thin thread. Vast reservoirs, powerlines, and roads have fragmented the landscape, displaced thousands of people, and submerged vast stretches of forests. Ironically, the most biodiverse regions along the river are the areas that have been dammed. The fragmented habitats along these stretches of river form part of the Sharavathi Lion-tailed Macaque Wildlife Sanctuary. Beyond the last dam at Gerusoppa, the river enters the coastal plains. 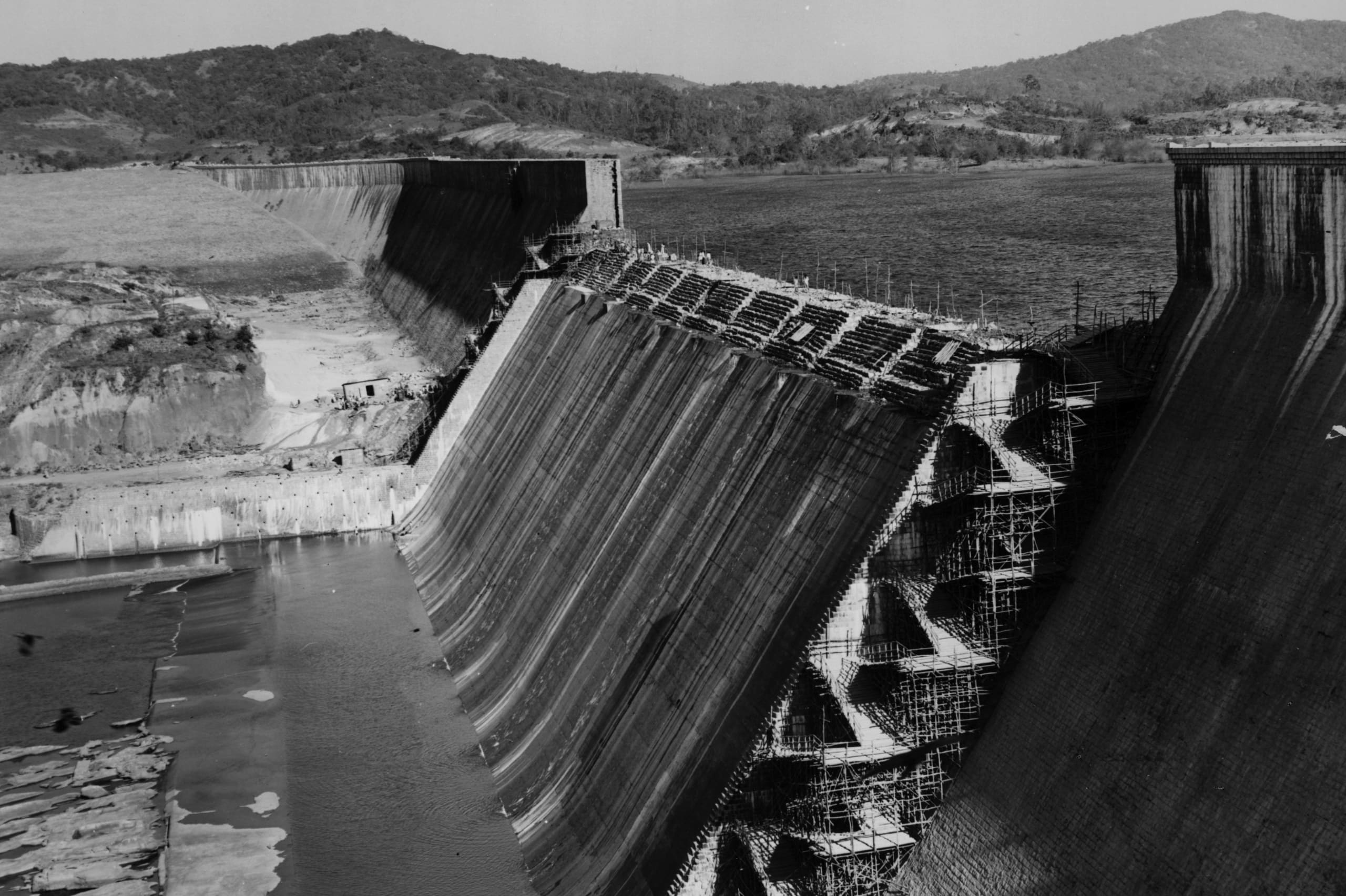 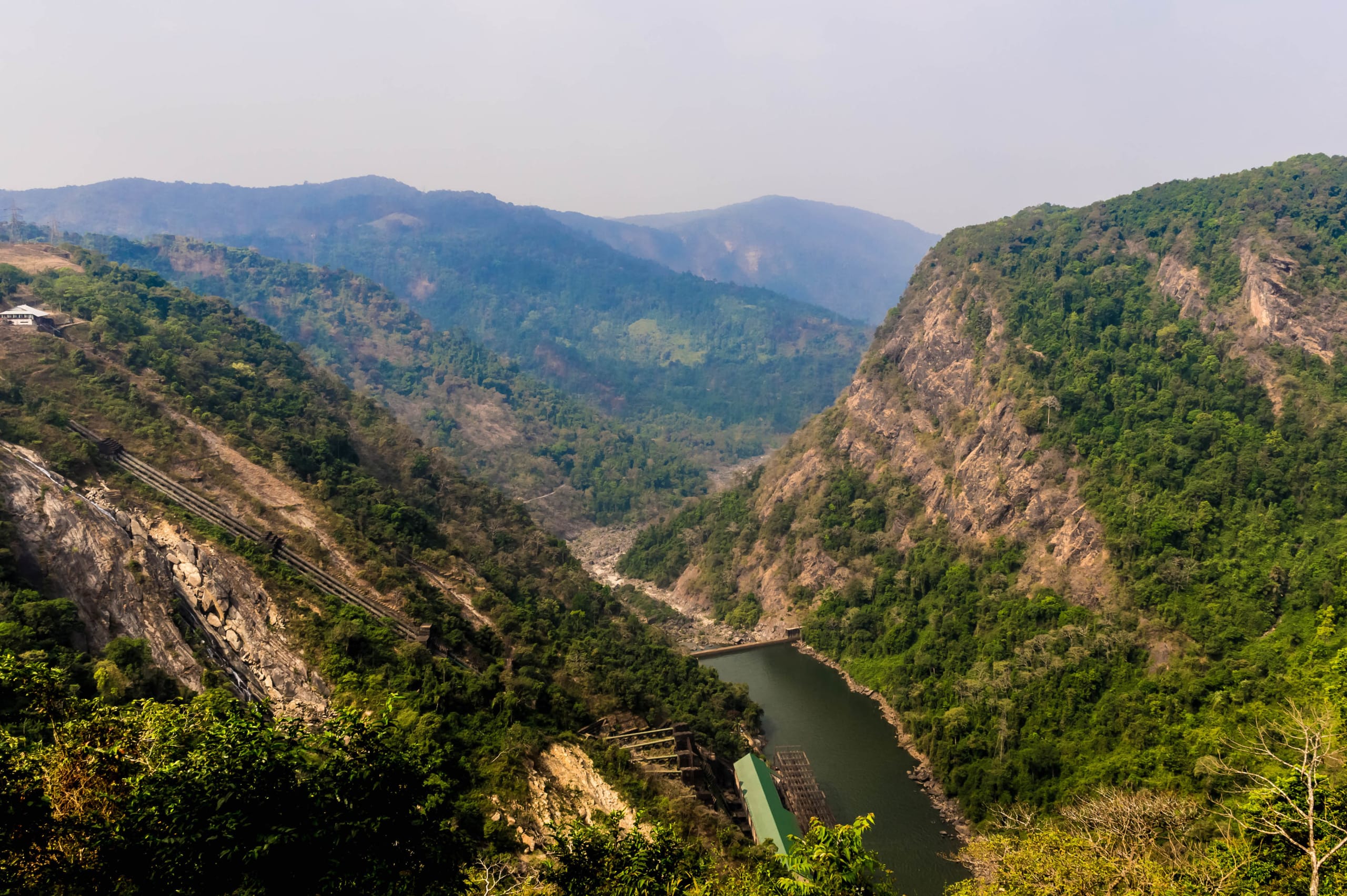 Since the 1960s, several dams have been constructed on the Sharavathi without any provisions for maintaining environmental flow (required to sustain ecosystems). These dams submerged over 100 villages and vast stretches of tropical evergreen and semi-evergreen forests. The massive reservoir of Linganamakki Dam (left), the largest of them, submerged some of the Western Ghats’ best forests, created artificial islands, and displaced people on a large scale. Electricity generated by these projects powers Bangalore hundreds of kilometres away. Photos: USAID, Historical Archive, Public domain, via Wikimedia Commons (left), Thangaraj Kumaravel from Chennai, India, CC BY 2.0 (right) Cover photo: Kalyan Varma 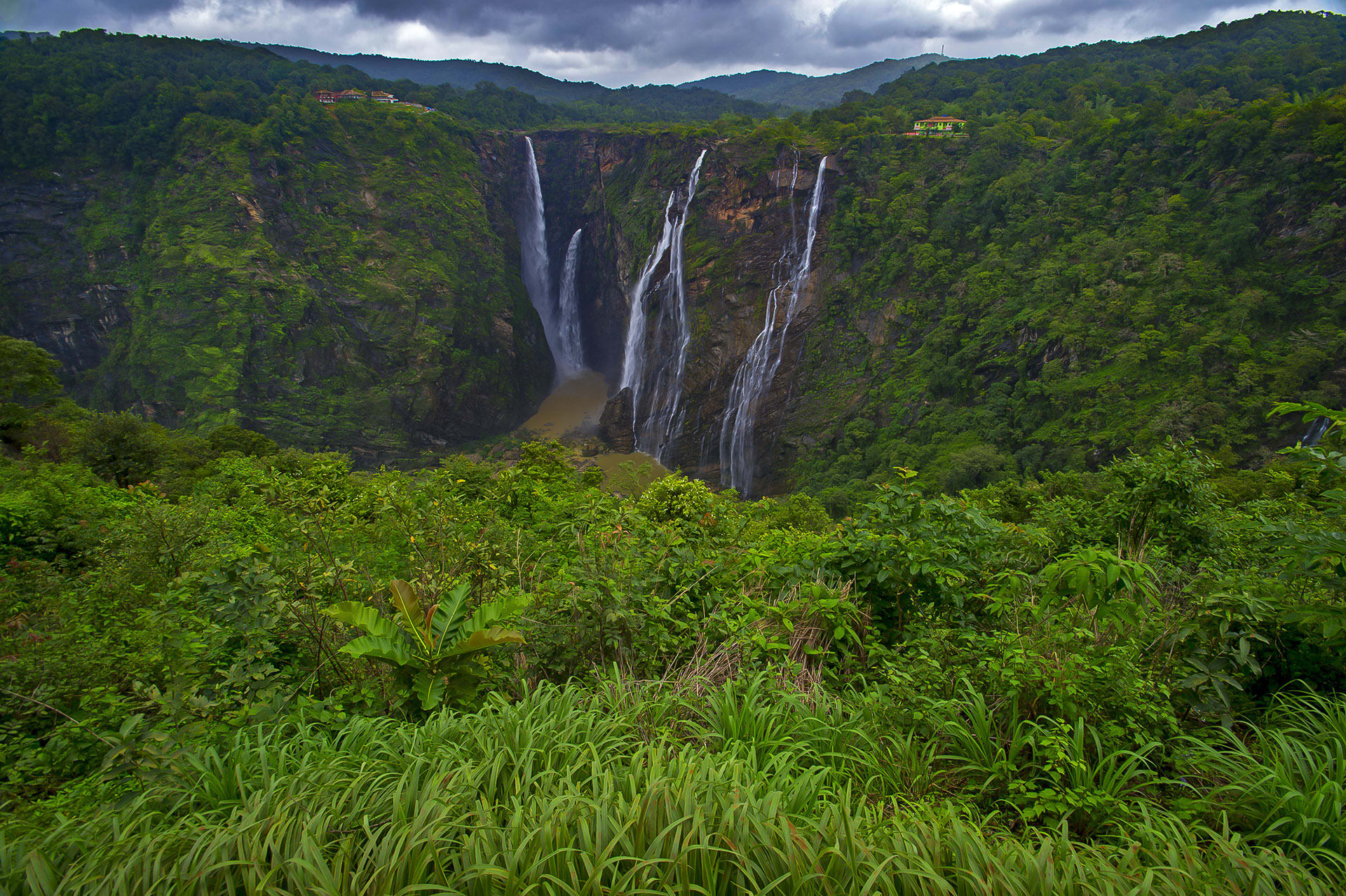 Downstream of the Linganamakki Dam is the famous Jog falls where the Sharavathi plunges down a cliff creating a bewitching sight every monsoon. The Jog wasn’t immune to the dam either and now withers up like a dead flower every year after the heavy monsoon rains. Thousands of tourists flock to this place during the monsoon to witness the coming alive of the waterfalls; most know nothing of why it disappears in other seasons. Photo: Dhritiman Mukherjee

The forests of the Sharavathi Lion-tailed Macaque Wildlife Sanctuary that fringe the river, lower dams, and reservoirs is home to one of the largest populations of endangered lion-tailed macaques (Macaca silenus). Found only in the tropical evergreen forests of the Western Ghats, this primate rarely descends to the forest floor in undisturbed forests. Subsisting mostly on a diet of fruits, seeds, insects and animal matter, these monkeys are now seriously threatened by roads, speeding traffic, and powerlines. In fragmented habitats, they are forced to spend more time on the ground leaving them susceptible to accidents and accustomed to tourists dispensing food to wild animals. Photo: Mithun1111, CC-BY-SA-4.0 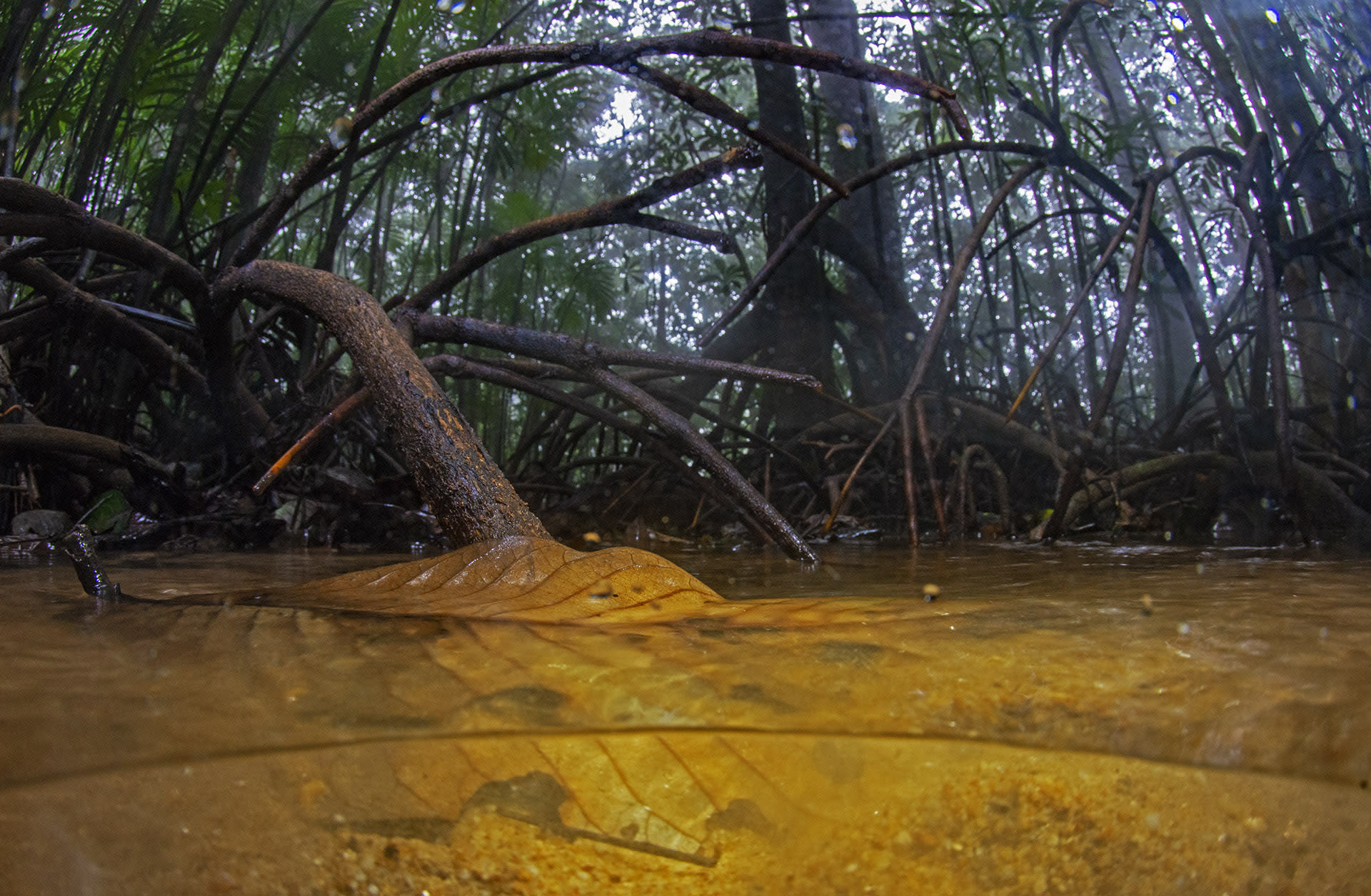 Another set of jewels in the crown of the Sharavathi Lion-tailed Macaque Wildlife Sanctuary are Myristica swamps. These ancient freshwater swamp ecosystems have trees uniquely adapted to waterlogged conditions with their stilt roots (for support) and knee roots (to exchange gases). These swamps are also a hotspot of diversity for amphibians, plants, fungi, fishes, and invertebrates. Photo: Dhritiman Mukherjee 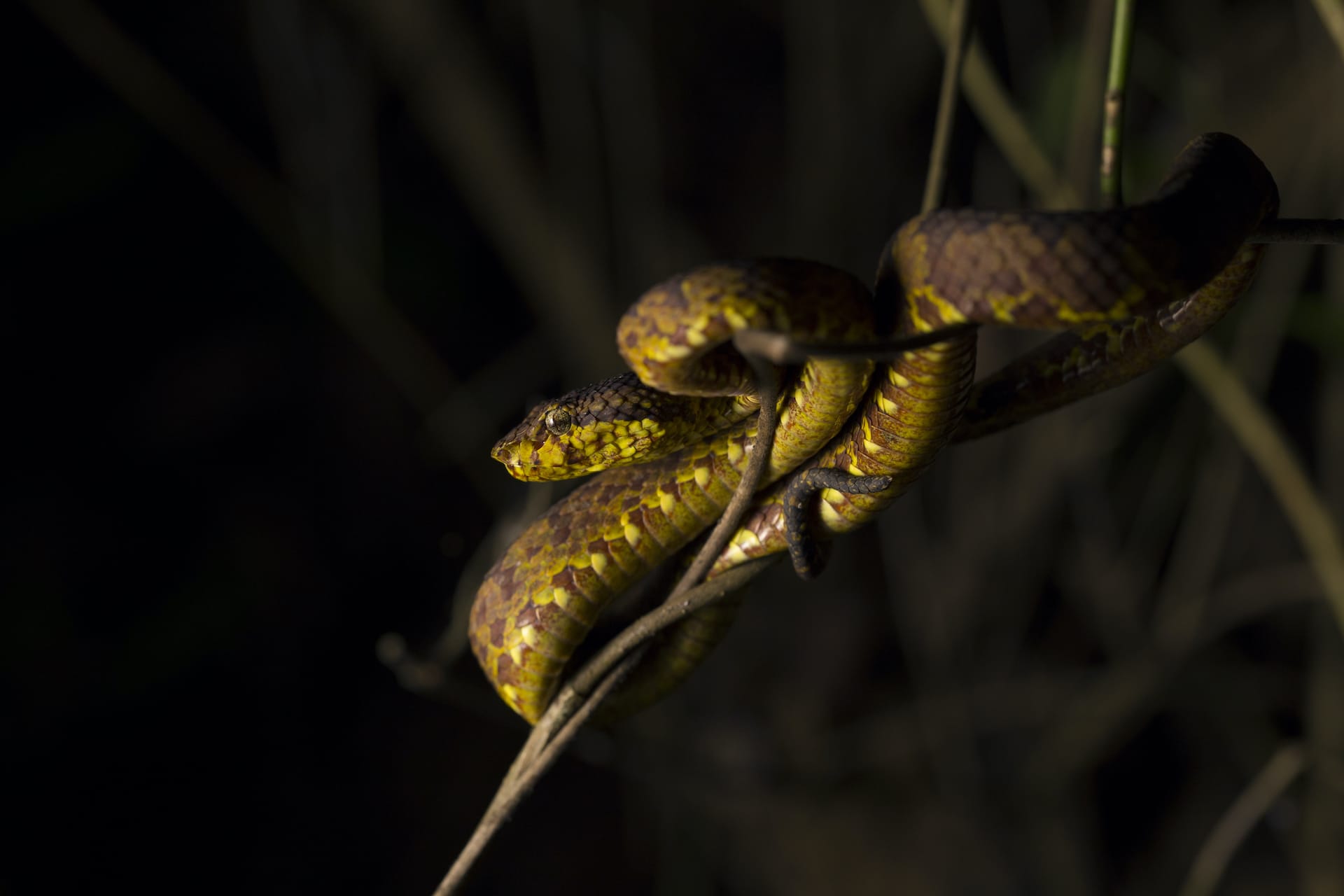 In the forests along the Sharavathi, the Malabar pit viper (Trimeresurus malabaricus) can be spotted on tree branches, roots, or along streams, waiting for unsuspecting prey that they detect using heat-sensing pits (located between eye and nostril). They come in various colour morphs ranging from blue-green to yellow and brown and are masters of camouflage. Though venomous, they are not fatal to humans. Photo: Saurabh Sawant 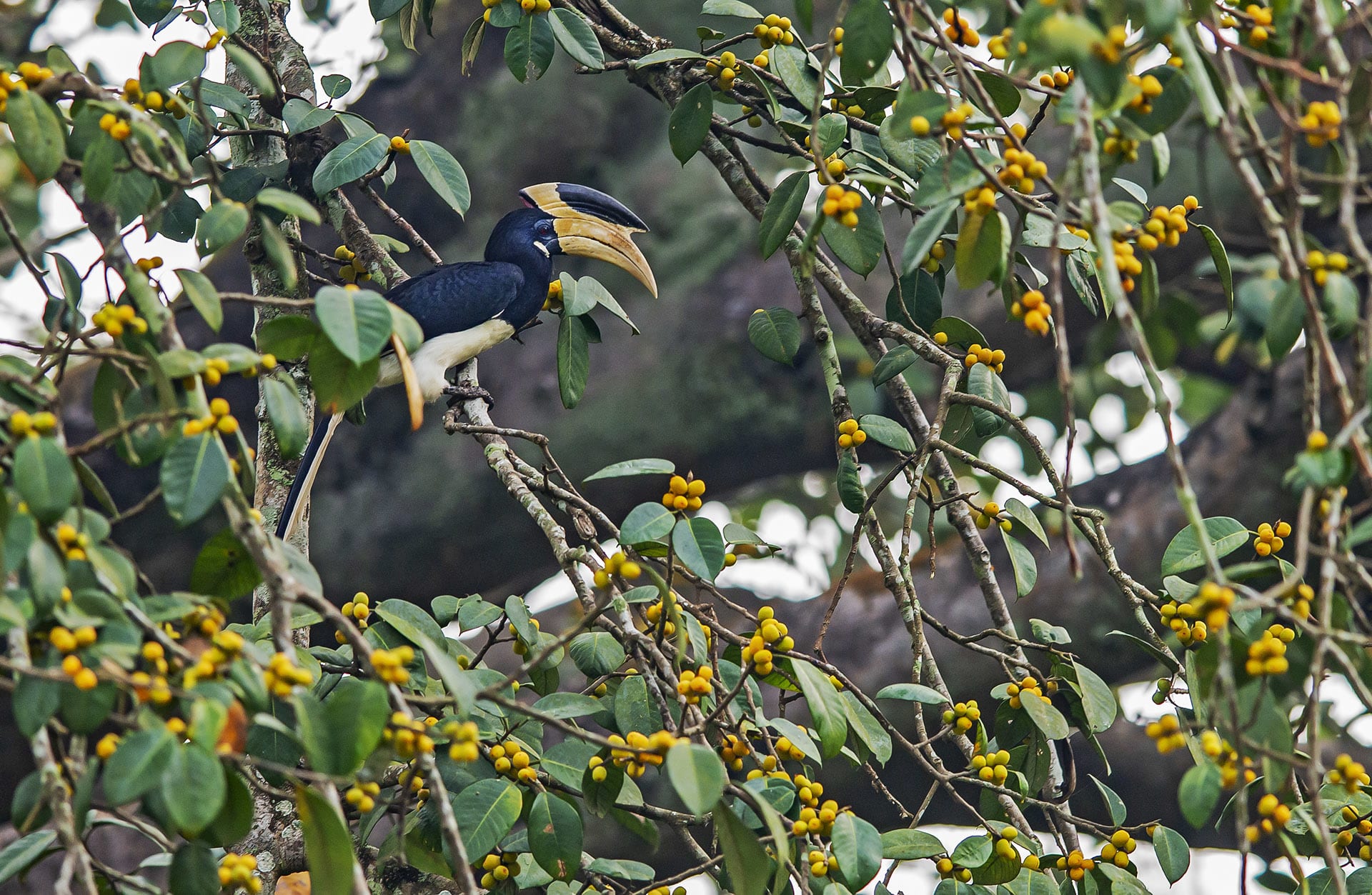 Malabar pied hornbills (Anthracoceros coronatus) are commonly seen flying across the slow-flowing Sharavathi in the coastal plains. Their loud, raucous calls make them easy to locate along riverbanks. Their larger cousins, the great pied hornbills (Buceros bicornis), have almost disappeared from the landscape. Photo: Dhritiman Mukherjee 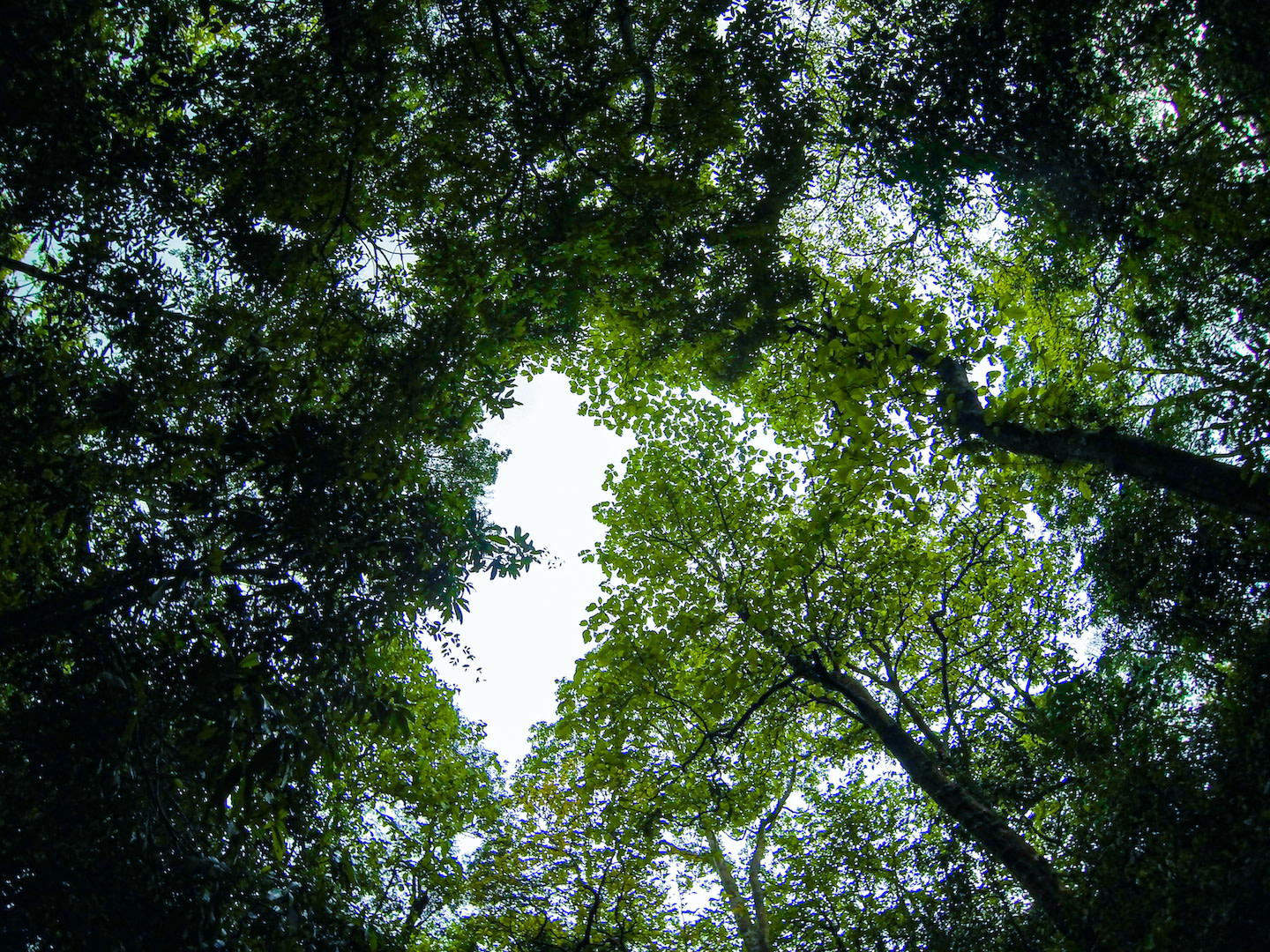 Close to the nondescript village Gerusoppa, at the foothills of the Western Ghats in Karnataka, a once luxuriant lowland tropical evergreen forest is now largely replaced by a patchwork of secondary forests and cashew and areca plantations. The place derives its name from the Kannada words “geru” meaning cashew and “soppu” meaning leaves. The river Sharavathi forms the heart of this landscape of hills, valleys, farms, and settlements. At Gerusoppa, the river flows out from the forest-clad hills into the humid heat of the coastal plains. Photo: Nisarg Prakash 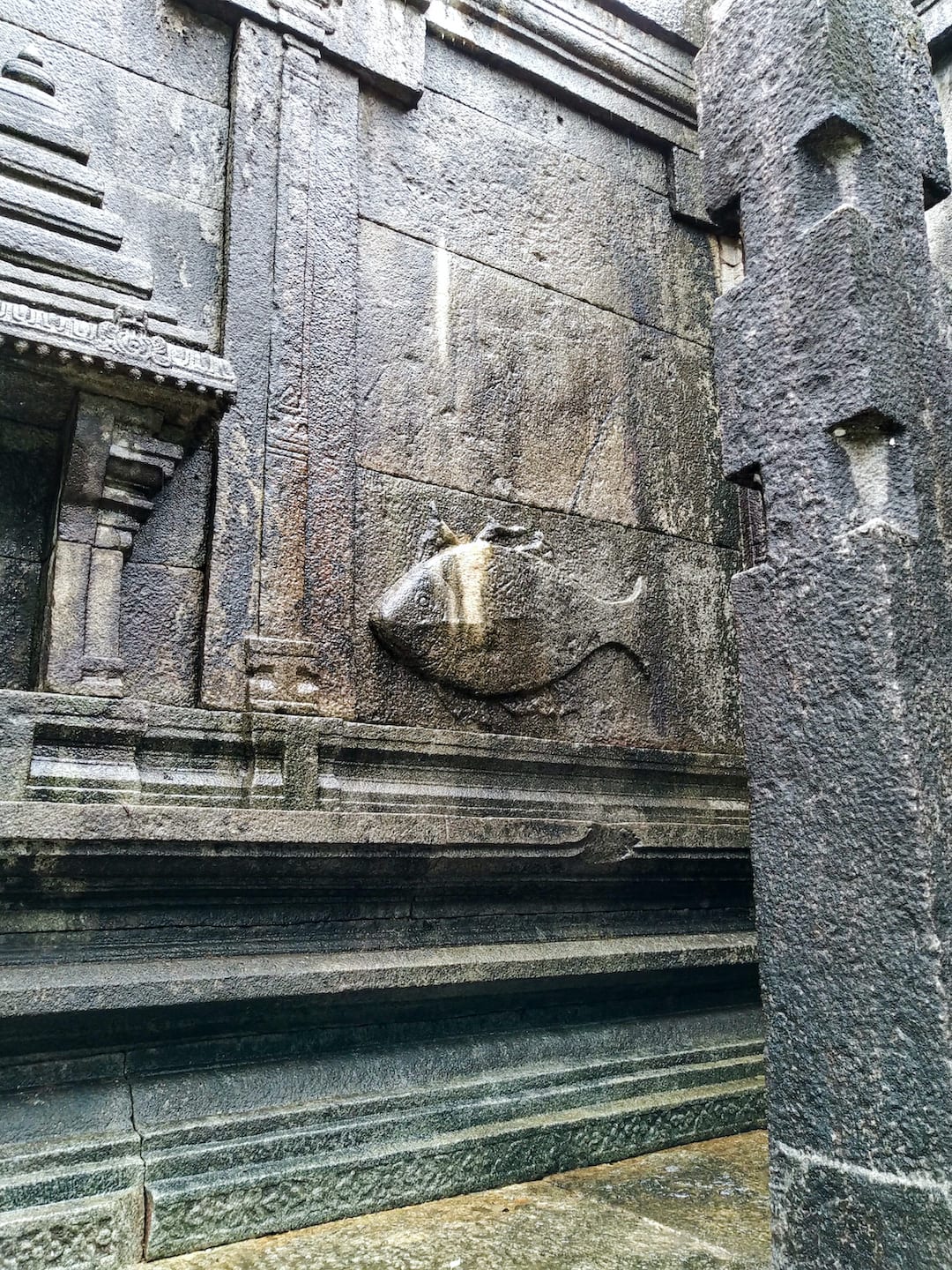 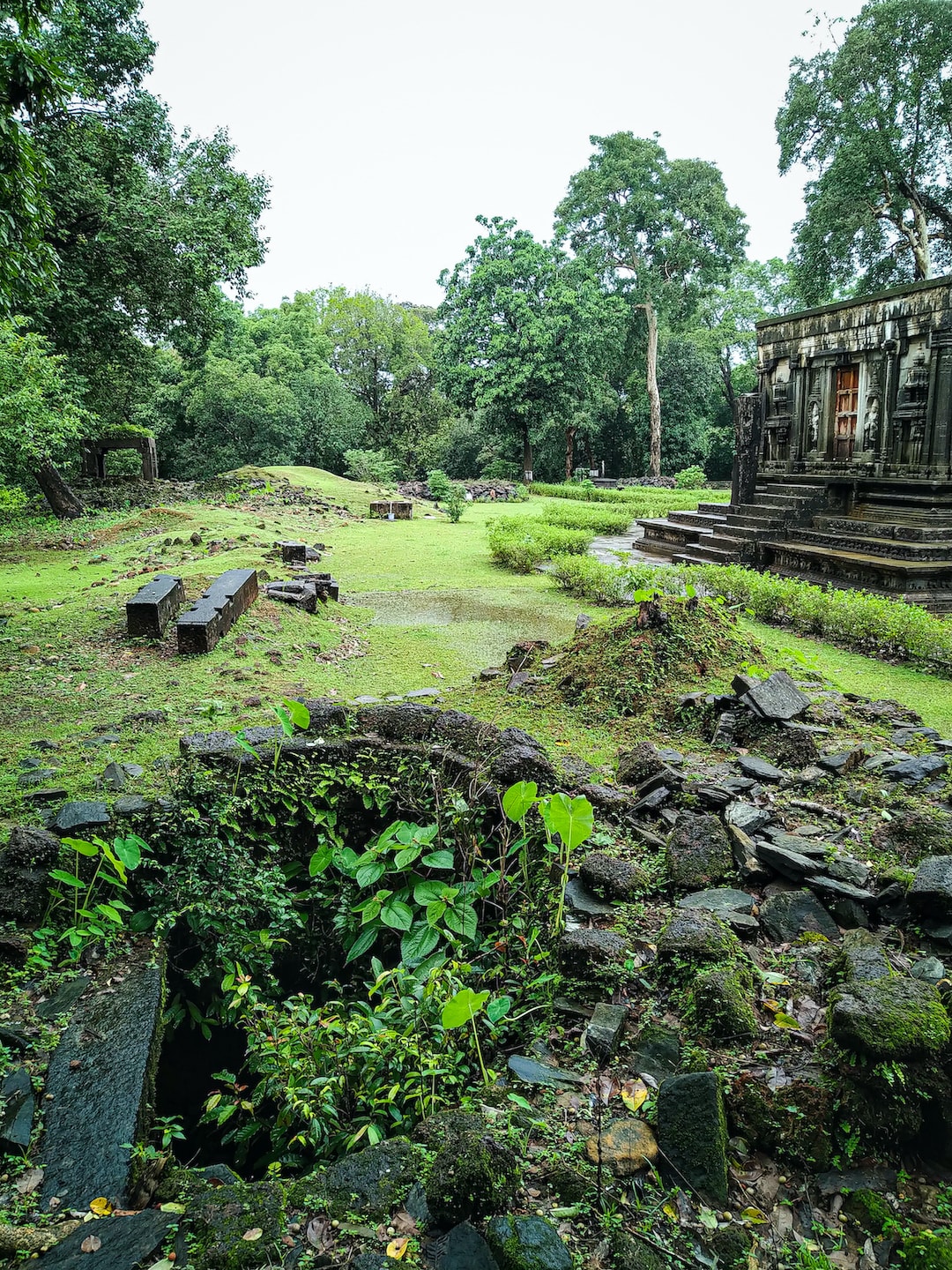 Hidden in the patchwork quilt of green beyond Gerusoppa dam, is the archaeological site of Chaturmukha Basadi. A stone’s throw from the Sharavathi, the ruins of an ancient kingdom lie within the surviving evergreen forests. This kingdom, led by queen Chennabhairadevi of the Saluva dynasty, was a bustling centre trading pepper with Portuguese ships that sailed all the way up the river in the 15th century. The place where the ruins lie scattered is now slowly being reclaimed by the wild. Fallen pillars, hidden wells, overgrown walls are clues to what it once was a kingdom carved in the forest, by a river that sustained it. This kingdom suddenly emptied out and historians and archaeologists do not know why. Photos: Nisarg Prakash

Despite being dammed, the Sharavathi is one of those rare rivers which does not have any industries or major towns along its course. This is reflected in the quality of its water which is mostly clean throughout the year. A little downstream from the last dam at Gerusoppa, the effect of the tides becomes pronounced. Saltwater rushes in from the sea with the high tide and drains out when the tide ebbs or when water is released from the dam. The Sharavathi’s problems are like those of other rivers dammed lower down in their course — that of saltwater entering areas previously drained by freshwater. This is due to water being withheld by the dams, and the resulting saltwater ingress could seriously imperil agriculture, drinking water sources, and riverine biodiversity. Photo: Nisarg Prakash

Closer to the coast, as the river widens and stretches hundreds of metres across from bank-to-bank and brackish water replaces freshwater, mangroves that once thrived here have largely vanished. They are only present in thin strips clinging to the river or on shallow sandbars midriver. The rhythm of the river, once decided by the tides, is now interrupted by dams upstream. With the change in riverscape, sand mining has replaced bivalve harvesting. Bivalve (a mollusc) harvesting was an integral part of these west-flowing rivers and thousands of people depended on it for their livelihoods. Bivalves were consumed locally by both people and numerous species of wading birds, and their shells used in industries. But with the construction of dams on the Sharavathi and the flow regime of the river hugely altered, there has been a drastic decline in this way of life. Photo: Nisarg Prakash

One of the country’s largest railway bridges spans the Sharavathi close to the town of Honnavar. Looking out of a passing train, one sees dark green hills upriver and the endless Arabian Sea some distance downriver. Dolphins swim upriver during high tide and return to sea with the ebb of the tide. Honnavar, with its pretty little lighthouse, sits near the mouth of the river. It’s a small town that is quickly changing to suit plans much beyond its control — such as a new port project. Photo: Nisarg Prakash 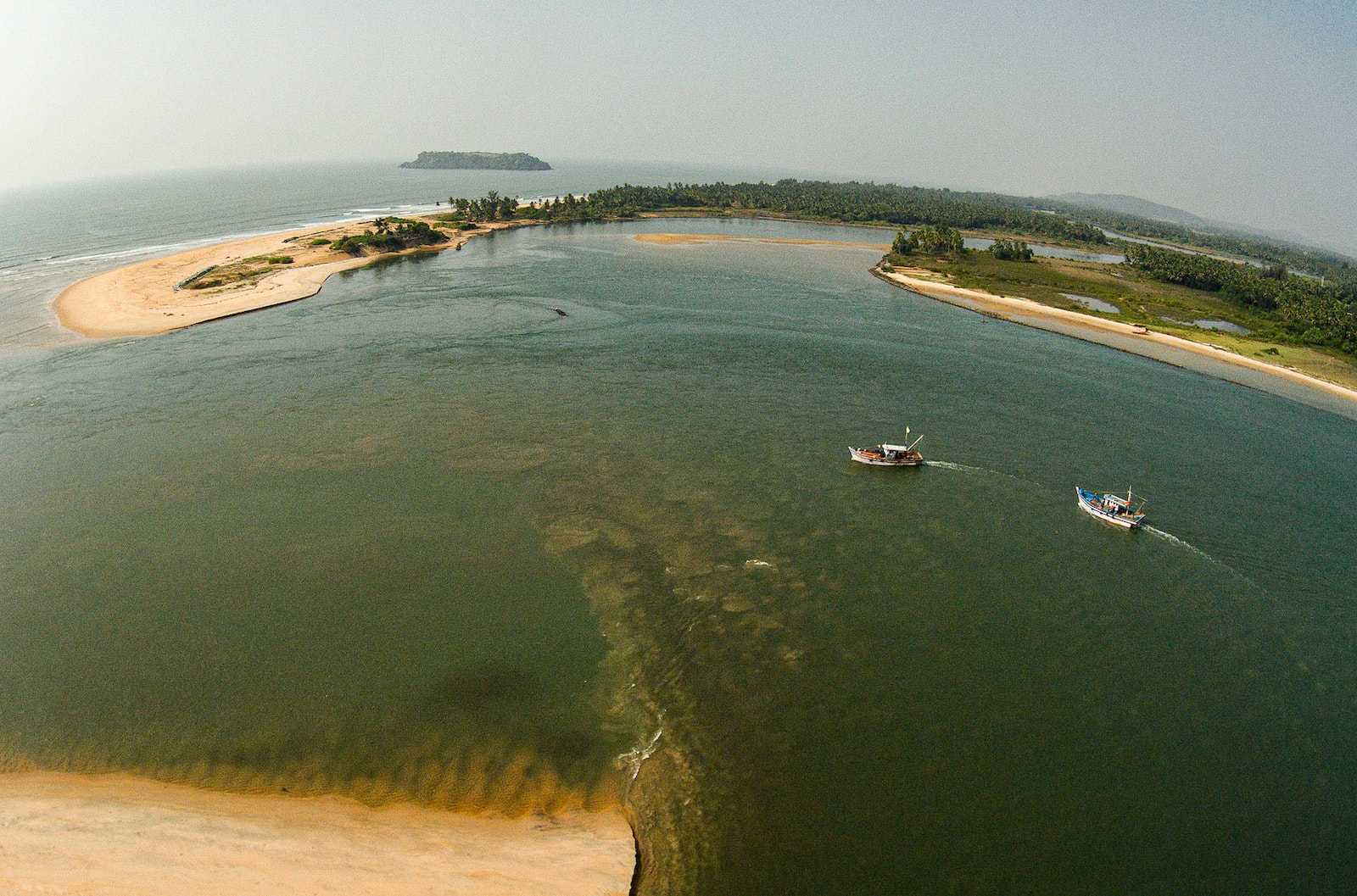 Dynamic beaches of sand once characterised the mouth of the Sharavathi past Honnavar. Here, every monsoon, the swollen river and heavy seas changed the shape of the coastline, creating new beaches of sand, like somebody playing with clay. Unfortunately, all of this has now mostly been erased. One of the ports of the pan-India Sagar Mala project is situated at the mouth of the river. Like a final nail in the coffin, the fate of the Sharavathi, which evolved over millions of years has now been decided by the dams and port that mostly cater to populations elsewhere. What happens to the river has little to do with whether local people want these projects or not and most often without the slightest regard to local ecology. Photo: Kalyan Varma