Found in nearly every state in India, from the Western Ghats to the Himalayas, these solitary, silky-haired bears spend much of their time with their noses to the ground 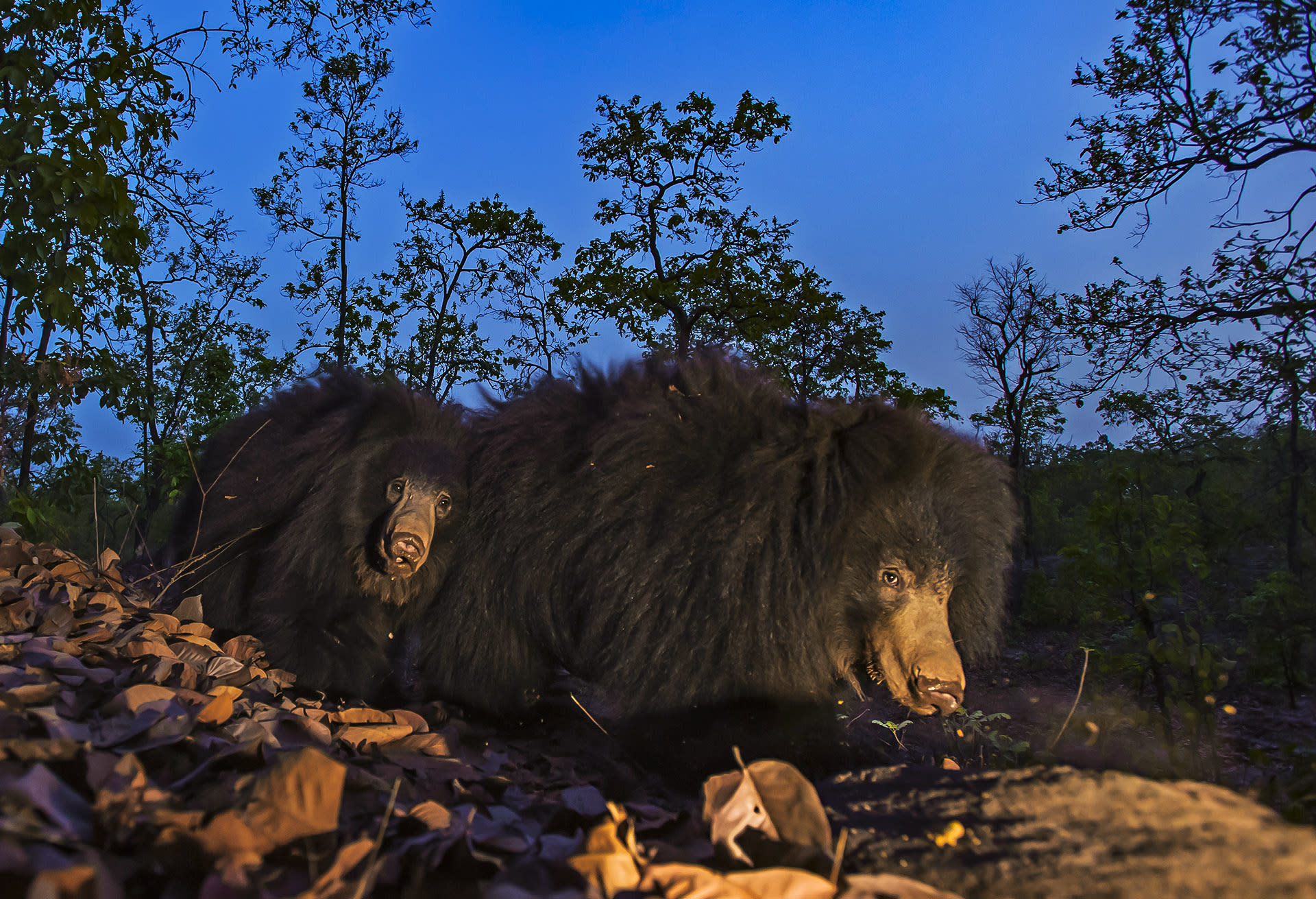 Sloth bears (Melursus ursinus) are creatures of the tropics and one of four bear species found in India. These large, black, silky-haired ursines are native to the Indian subcontinent and found all over the country, from the Western Ghats in the south to the foothills of the Himalayas in northern India (but are largely absent in the Northeast). They are what scientists call “myrmecophagous”, meaning they eat ants.

These forest-dwelling bears spend most of their waking hours with their nose to the ground, sniffing soil and leaf litter for telltale signs of ant and termite colonies. When they do find an ant nest, sloth bears use their long, slender claws to burrow into the mound, then stick their snouts into the hole, and suck the insects into their mouth (like Balloo did in the film, The Jungle Book). In addition to protein-rich insects, sloth bears also have a fondness for honey, sugar-rich fruit, and the petals of flowers, especially those of the mahua tree.

And yet, these are among the most feared animals in the country, allegedly responsible for numerous violent encounters with human beings. The internet is rife with accounts of human-bear conflict, some more gruesome than others, but like all matters of wildlife conservation, the reality is not black and white.

In the book, Mammals of South Asia, Dr K Yoganand et al write that though the geographical range of sloth bears has not changed, “the present range has shrunk along its peripheries and has become fragmented overall.” Many believe that the conflict between humans and sloth bears is a result of this habitat loss. They say that today, about ten per cent of India’s remaining forests are considered secure for the species.

The physiology and behaviour of the species is another consideration: sloth bears have notoriously bad eyesight and react aggressively when startled in their habitat. “Conflict can occur when people enter woods for fuel and forage, or when bears are forced to travel through human settlements in search of food and water,” writes Gloria Dickie in an article for National Geographic titled How To Make Peace With The World’s Deadliest Bears.

Sloth bears are endemic to the Indian subcontinent and are found in India, Nepal, Bangladesh, Sri Lanka, and parts of Bhutan, according to the IUCN. Over 90 per cent of the global population is in India. “The forests of the Western Ghats and the central Indian highlands are currently the two strongholds of the sloth bear,” write the authors of the book, Mammals of South Asia. “In terms of forest type, dry and moist deciduous forest together hold the majority of the sloth bear population.” This image was taken in Tadoba-Andhari Tiger Reserve, Maharashtra, which has a thriving sloth bear population. 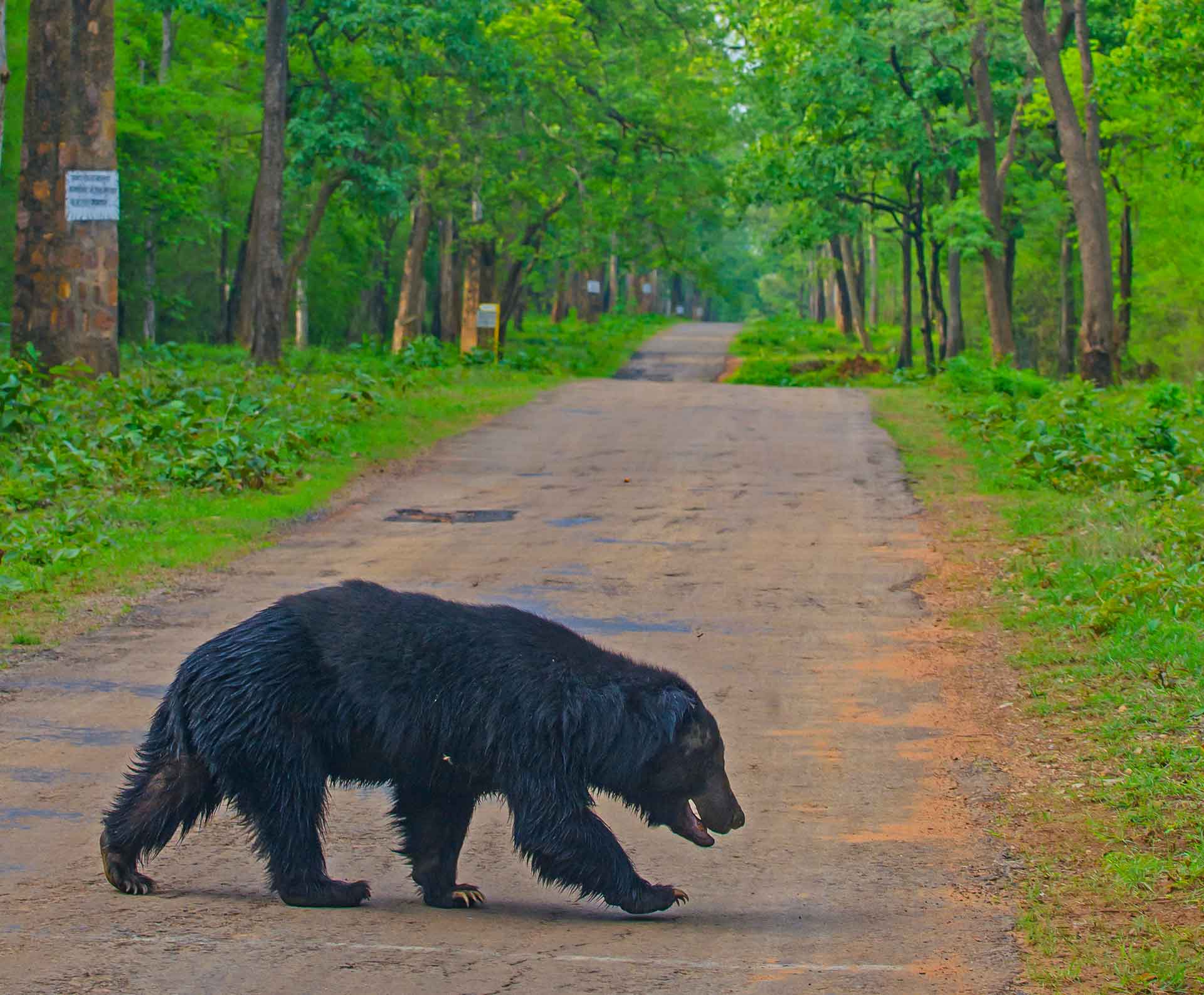 Sloth bears have many physiological adaptations that are suited to eating insects. They have a strong sense of smell, long claws to dig, and the ability to close their nostrils, to ensure insects do not enter their nasal passages when they eat. In addition, they don’t have front teeth, an adaptation that helps them consume insects with greater ease. “Without front teeth getting in the way, they can suck up termites like a vacuum!” says the website of Wildlife SOS, an organisation that has been working with sloth bears for many years now. 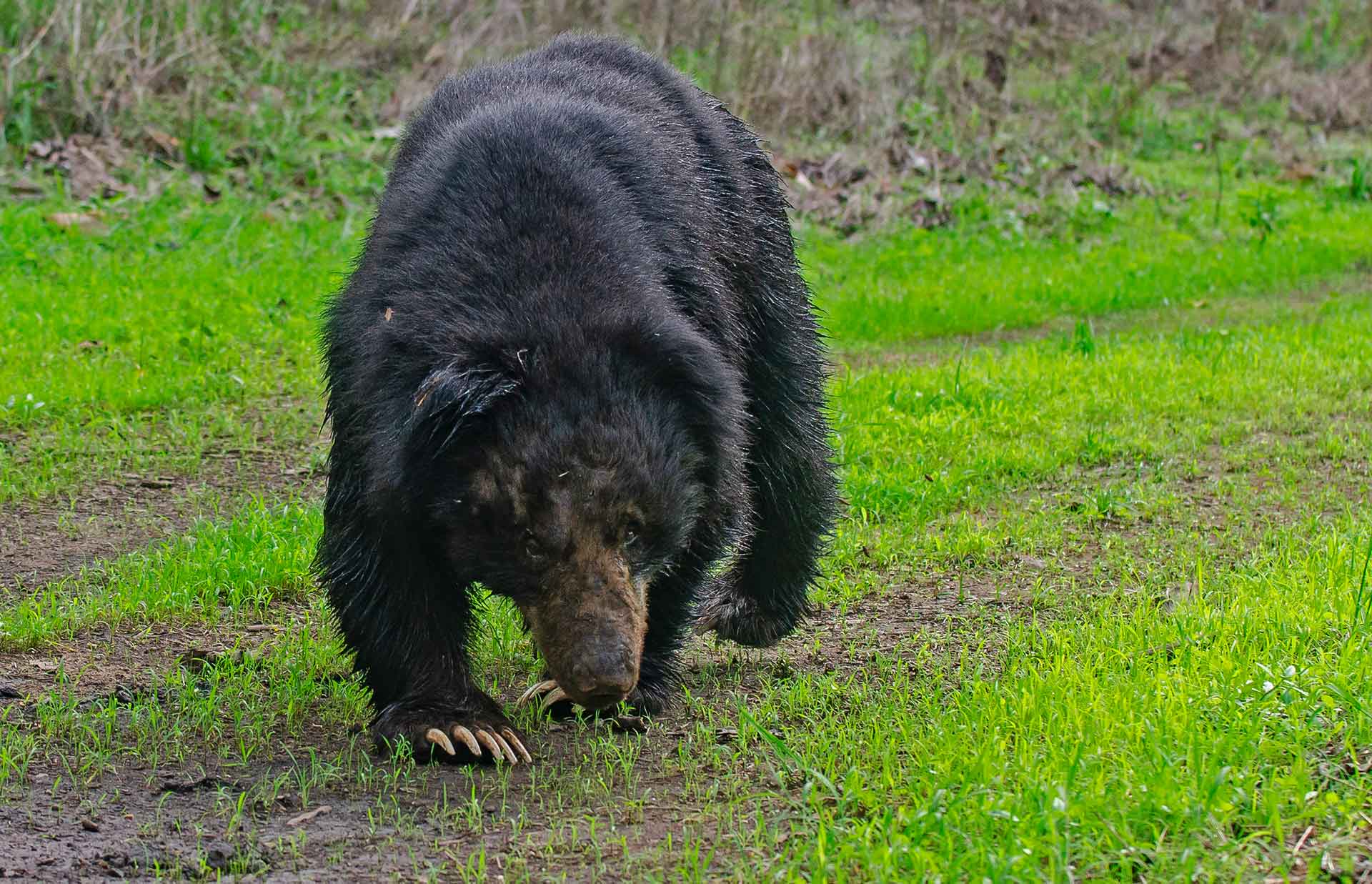 In addition to insects, sloth bears also consume plenty of fruit. “Despite their adaptations for myrmecophagy, results of past studies indicate that diets of sloth bears may vary seasonally and geographically across their range from Nepal, south through India to Sri Lanka, depending on the availability of fruit and the hardness of mounds that harbour colonies of termites,” write Dr Tana Mewada et al in the paper, Seasonal Dietary Composition Of Sloth Bear (M. Ursinus) in the Reserve Forest Of Vijaynagar, Gujarat, India. The study showed that the bears fed extensively on the fruits of fig and cassia trees in summer and winter but spent considerable time digging for insects during the monsoon.

Sloth bears are largely solitary, save for mature females in the company of their young. Their movements vary according to the time of year, phase of the life cycle, and proximity to human habitation. In wilder, forest areas, sloth bears emerge around dusk though “sub-adults and females with dependent young limited their activity to daylight hours,” writes the authors of Mammals of South Asia, adding that “this might be to temporarily avoid other bears and predators.”

According to the IUCN, “sloth bears typically breed May through July, and females give birth, usually to one or two cubs, from November to January.” Females birth their young in cavernous dens and look after their young for up to two years after they are born. Males are not involved in the parenting process, but camera-trap studies by Wildlife SOS “report the use of chemical communication techniques by the male bears in order to mark the den sites. These include pede-marking [marking made with feet], defecation, urination and rubbing or scratching against trees.” 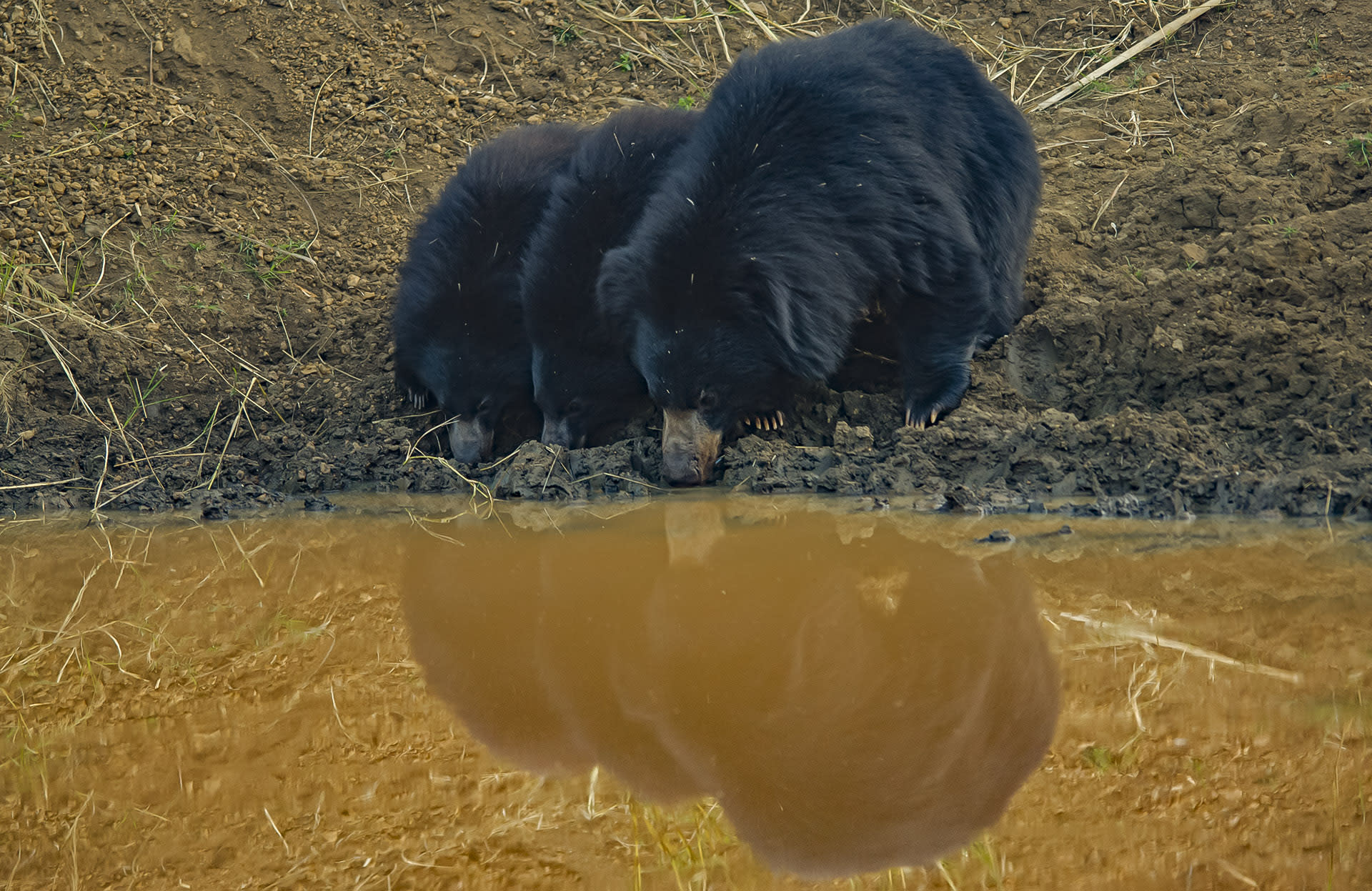 Studies by Wildlife SOS also indicate that sloth bears occasionally share caves or dens with porcupines, rusty-spotted cats, jungle cats, mongoose, wild boar, snake species, and monitor lizards. “Once sloth bear mothers enter a den to give birth, they will not come back out for food or water for three to eight weeks,” reports the Wildlife SOS website. “When she first emerges from the den, she does so alone, leaving the cubs in the den, and quickly gets some water and food before returning to her cubs.”

About two weeks after they are born, the young emerge from their dens in the company of the mother bear. “Cubs often ride on the mother’s back during their first nine months, presumably to reduce the risk of predation,” according to the IUCN. “Cubs remain with their mothers for 1.5-2.5 years resulting in a 2- or 3-year interbirth interval.”

For decades, sloth bears across India were illegally captured and turned into “dancing bears”. They were separated from their mothers at a young age, chained, and treated brutally in the name of training. They were forced to perform on street corners and earn a livelihood for communities that had been doing it for generations and saw no other way to earn money. Thanks to funding, community outreach programmes, and awareness drives by organisations such as Wildlife SOS, dancing bears are now largely considered a thing of the past. 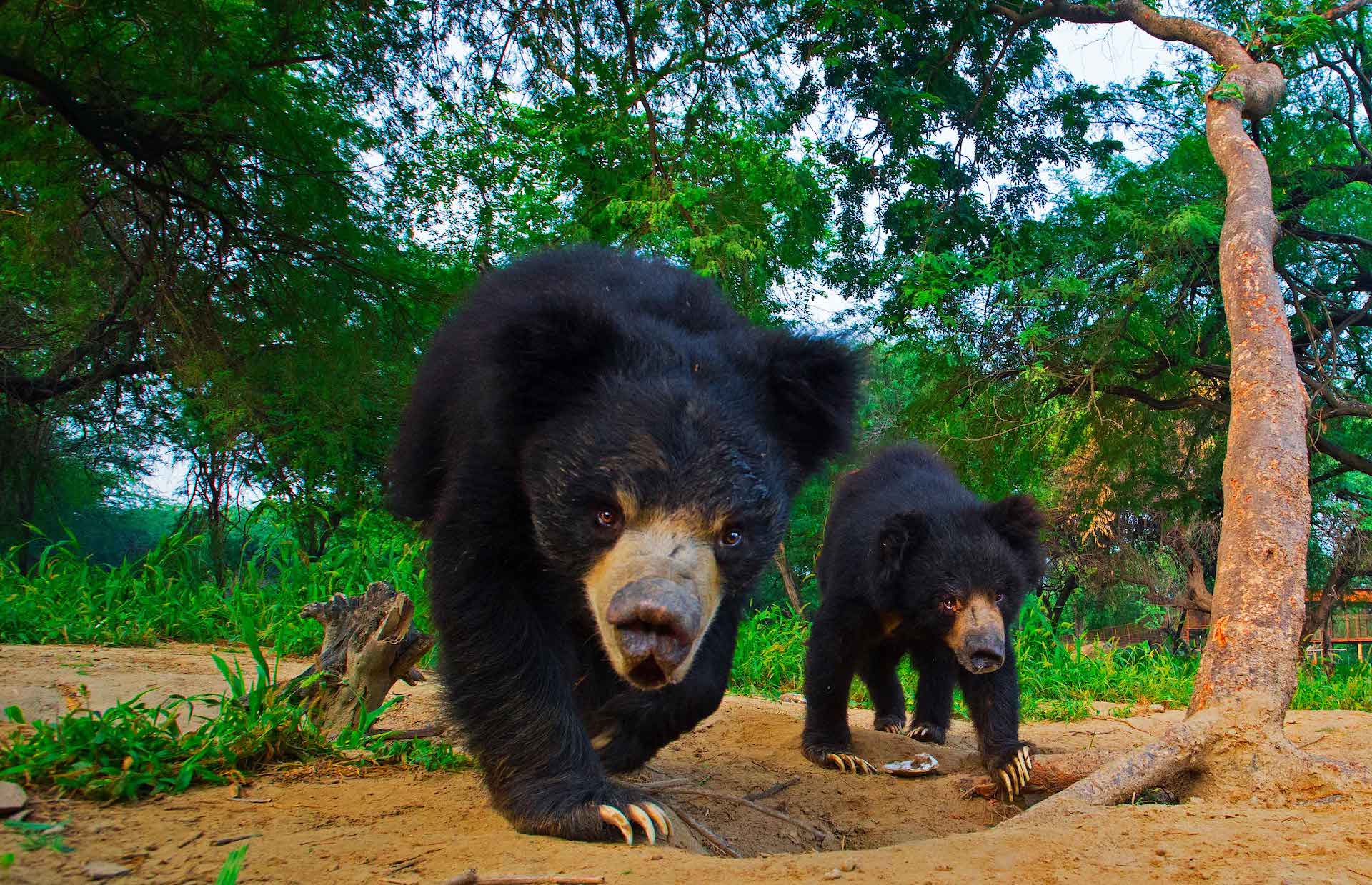 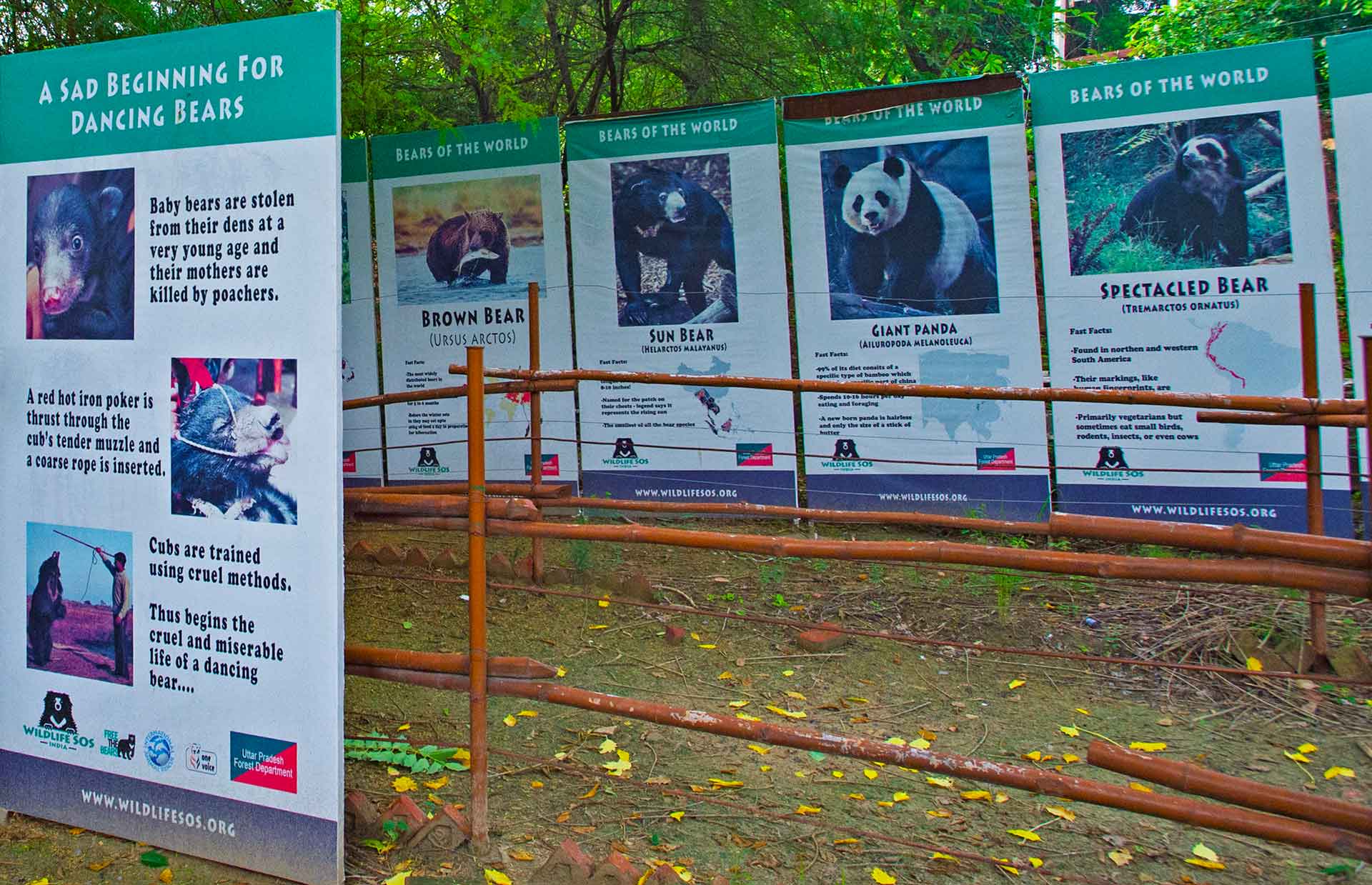 Wildlife SOS runs four sloth bear rescue centres in Agra, Purulia, Bhopal, and Bangalore, and another for brown and moon bears in Dachigam. Over 600 bears, previously trained to perform, live out their lives in these semi-wild reserves. These photos were taken at the centre in Agra, established in 1999 in collaboration with the Uttar Pradesh Forest Department. According to the organisation’s website, “it currently houses over 130 sloth bears as well as many other species of wildlife in large, forested enclosures with ponds and shady trees.” 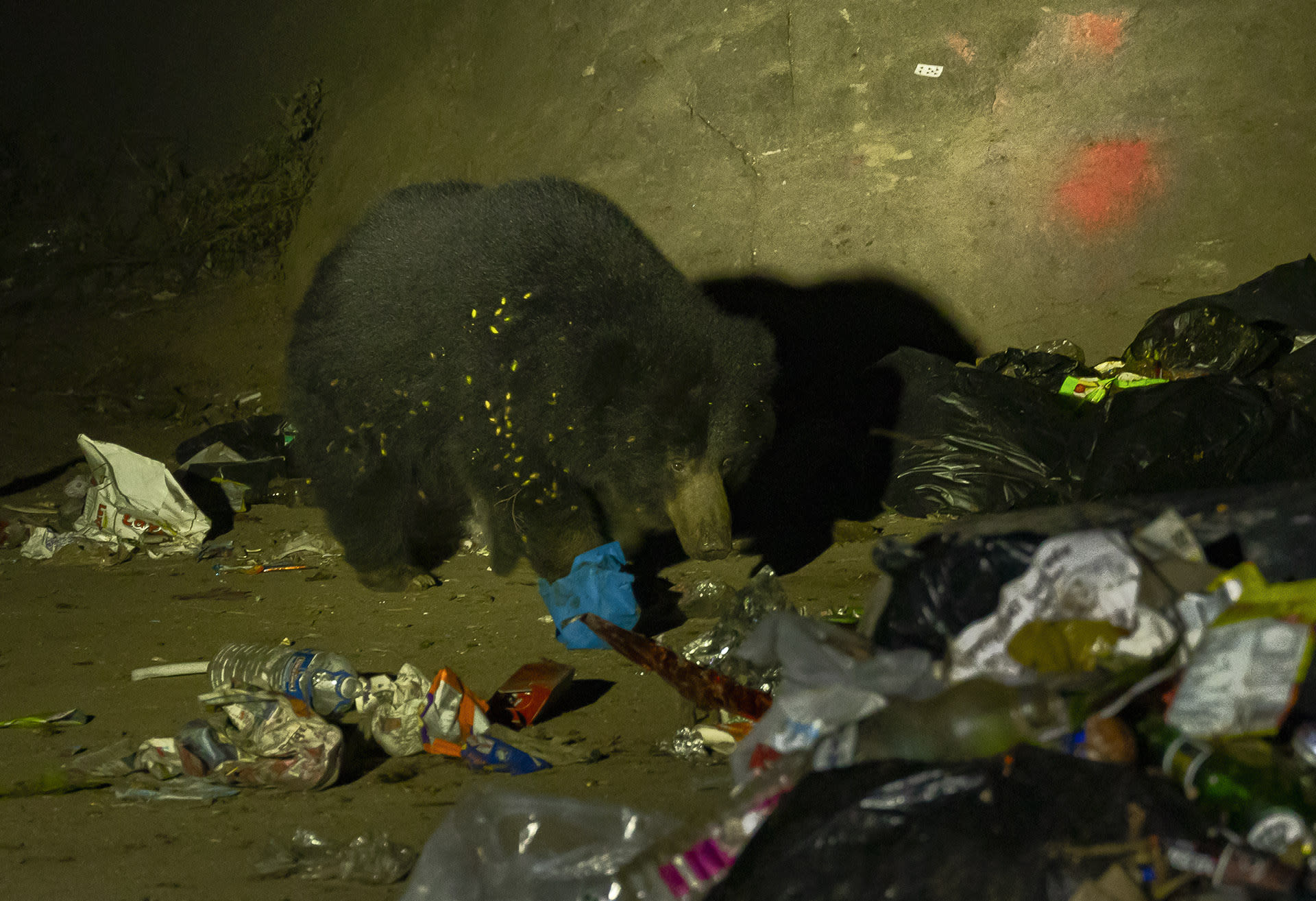 Near Mt Abu in Rajasthan, sloth bears have been reported around garbage dumps in and around the town. “During temple season, they follow large groups of religious pilgrims for days and eat their leftovers,” says wildlife photographer Dhritiman Mukherjee. Improper disposal of organic waste is another cause for the increase in conflict with wildlife, especially in hill station towns such as Mt Abu, where the boundaries between wild and domestic are porous.

“Wild sloth bears generally do not frequent areas used by humans,” writes Nishith Dharaiya in the article, Escalating Human-Sloth Bear Conflicts In North Gujarat: A Tough Time To Encourage Support For Bear Conservation, “but when streams and waterholes in forests dry up, and where suitable habitat is limited, bears might predictably move towards sources of water or food at villages and in doing so increase their chances of encountering humans.”

As human populations in India swell, interactions with wildlife such as sloth bears is on the rise. Now more than ever, it is crucial that we understand the ecological needs of sloth bears, so we may reduce violent encounters, and perchance, even co-exist with these seed-dispersing, insect-loving guardians of the forest.