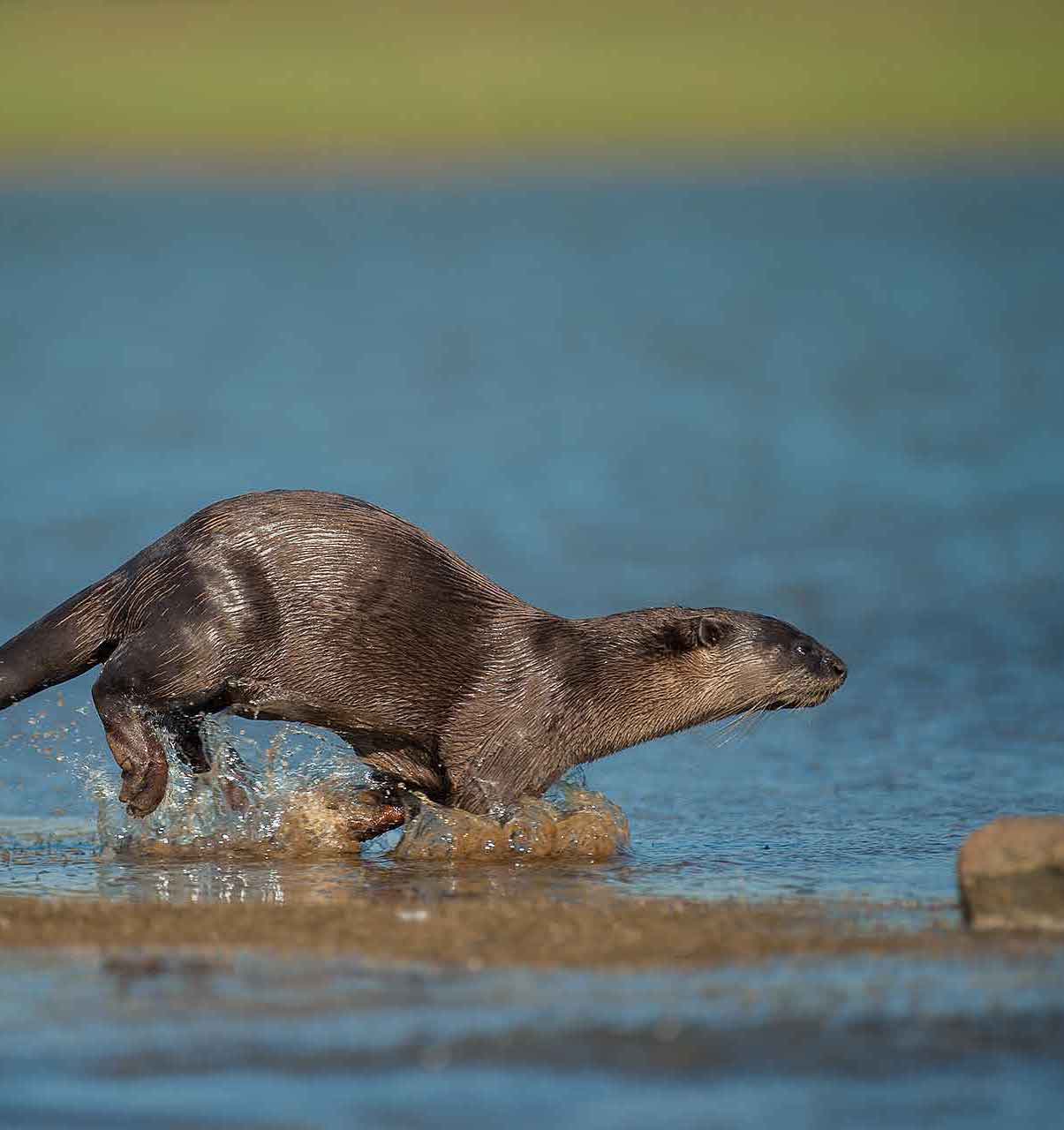 Picture a river in the plains. Slow flowing and meandering, lined with rushes and other seasonal grasses, sandy banks, and small islets. Trees pepper the banks and form a protective riparian layer from the vastly modified agriculture fields beyond; honge and mango trees in places, fig and arjuna in others. There are stands of Salix tetrasperma, the Indian willow, hugging the water’s edge; all of them are probably just one large tree connected by roots. People wash clothes, kids play in the shallows, and buffaloes wallow in the mud. Like most of India’s surviving rivers, this is a human-dominated landscape, with very little of it protected or allowed to flow unhindered to the sea.

River and whiskered terns fly low, wheeling around and diving in, while small blue kingfishers sit on their favourite riverside perches. For me, a river in the plains of southern India is synonymous with the effervescent smooth-coated otter.

Smooth-coated otters (Lutrogale perspicillata) are the largest otter species in Asia and one of three species found in India. Their ideal habitat is a river in the plains. But a river in the plains is anything but idyllic in today’s India. Despite all the abuse we heap on our rivers, these animals still make the most of what they have. Unlike their terrestrial counterparts, animals restricted to linear habitats like streams and rivers do not usually have the option of moving to a more conducive habitat elsewhere when their current habitat is dammed, fragmented, polluted, mined, dynamited, or diverted. Smooth-coated otters have learned to adapt to changing riverscapes else they would perish. Despite their resilience, these top predators of our rivers have disappeared from large parts of Southeast Asia, primarily due to poaching for their pelt. Many rivers in northern India are now bereft of this iconic species, victims of organised poaching gangs. Otter poaching has not attracted the kind of attention that poaching of big cats or elephants and rhinos has, partly due to their habitats being outside the “Protected Area” (PA) network and being “non-charismatic” species. Despite these losses, India is still home to the largest population, particularly in the rivers of the south, where smooth-coated otters still thrive. Smooth-coated otters are found from the headwaters to the mouths of rivers along many of India’s east-flowing rivers. They are even known to inhabit mangroves and brackish water lagoons on the east and west coasts.

Very few of our rivers are protected by the PA network, and among these, I count the Cauvery flowing through the heart of Cauvery Wildlife Sanctuary as the finest. A 100-km stretch of pure smooth-coated otter habitat. This protected stretch of nearly contiguous riparian forest harbours not just otters but a healthy population of muggers, softshell turtles, grizzled giant squirrels, and native mahseer.

A healthy, productive river can support large packs of otters. However, in most rivers, smooth-coated otters and fishers compete for resources. Conflict is inevitable, and fishers grudge that otters take fish from gill nets and damage them while snacking. Additionally, otter pups are vulnerable to drowning from entanglement in nets. Fragmentation of rivers by dams and intensive fishing often leads to a declining prey base that affects smooth-coated otters and the fishers who depend on rivers for their livelihoods. 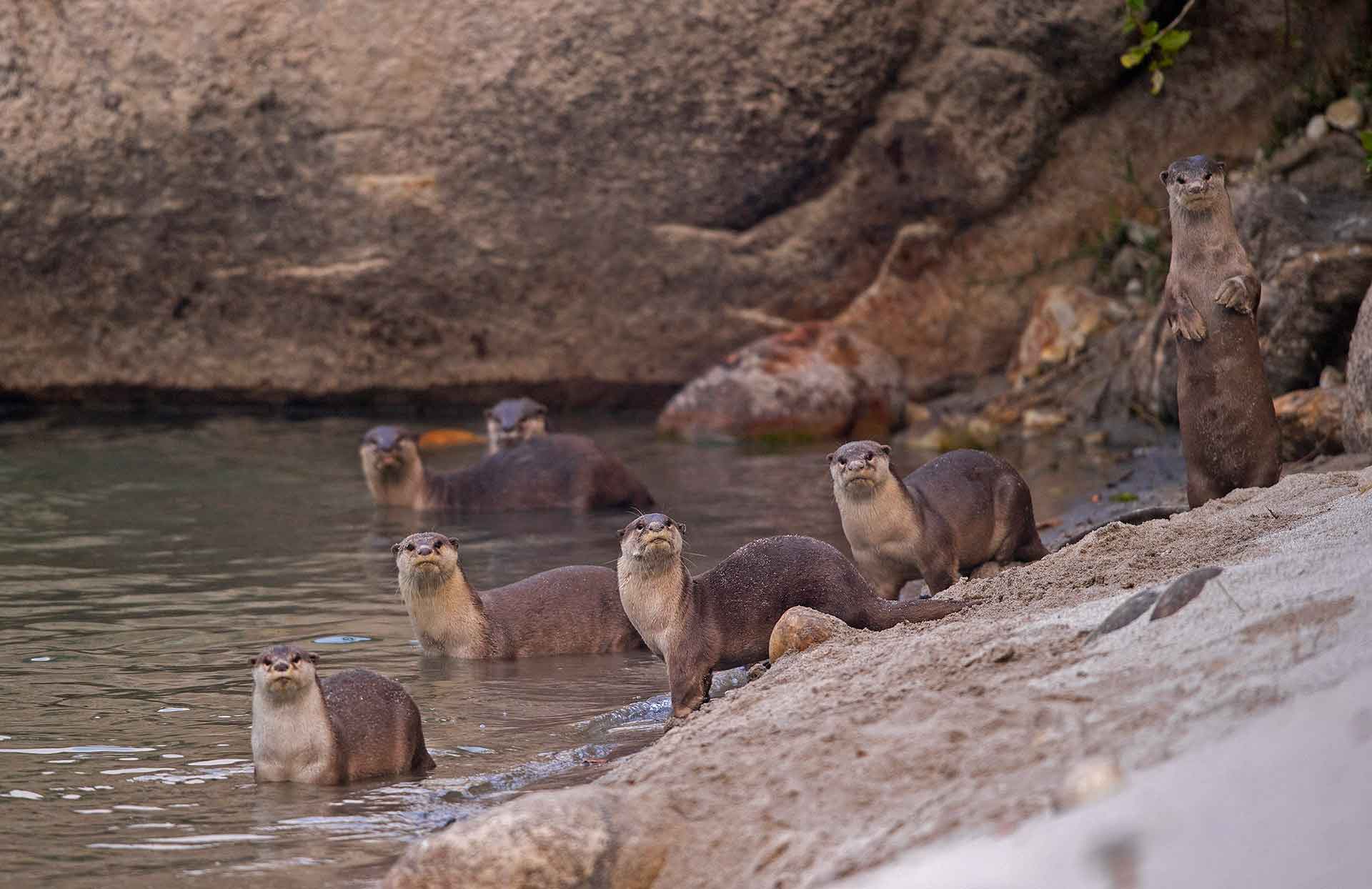 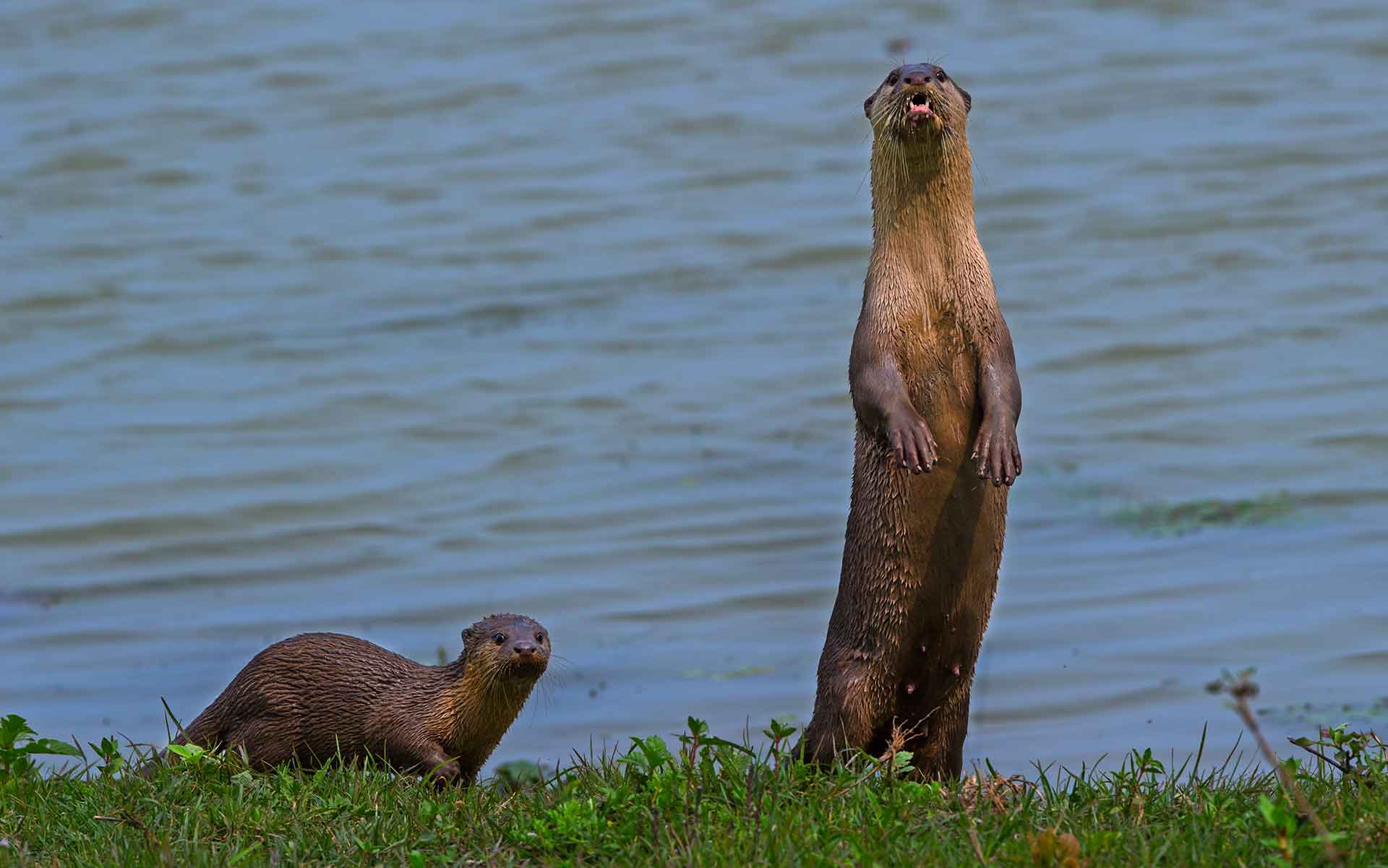 One of the first things to strike me when I watch a group of smooth-coated otters is their inquisitive, playful nature. They are social animals that spend a lot of time hunting, grooming, and playing together. A group of otters could consist of 5-15 individuals. When alerted, the otters will stand up on their hind legs to survey their surroundings. When otters detect a threat in the water, they “periscope” to get a better view; this is accompanied by alarm calls to warn others.
Photos: Dhritiman Mukherjee Cover photo: Phillip Ross 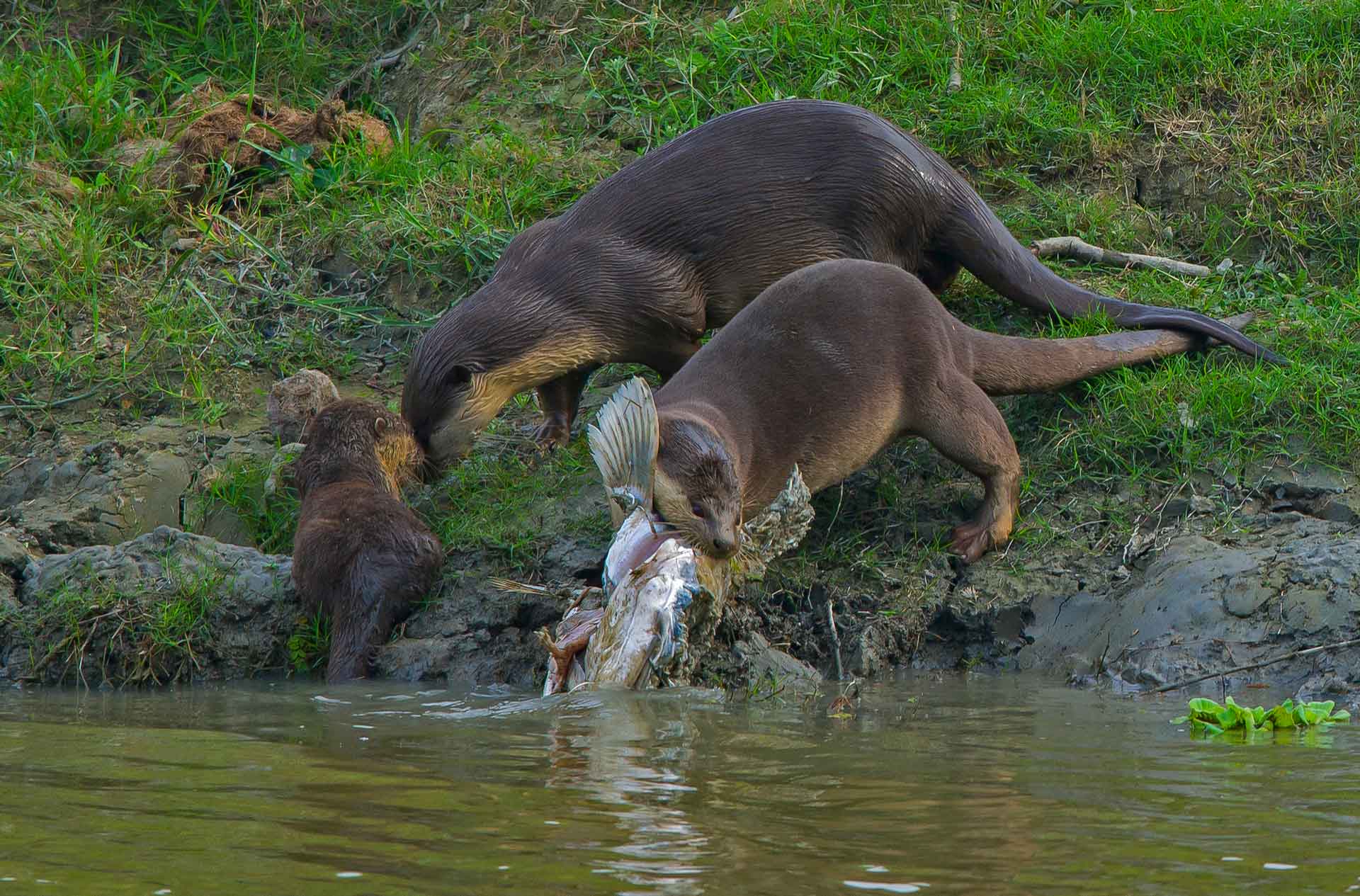 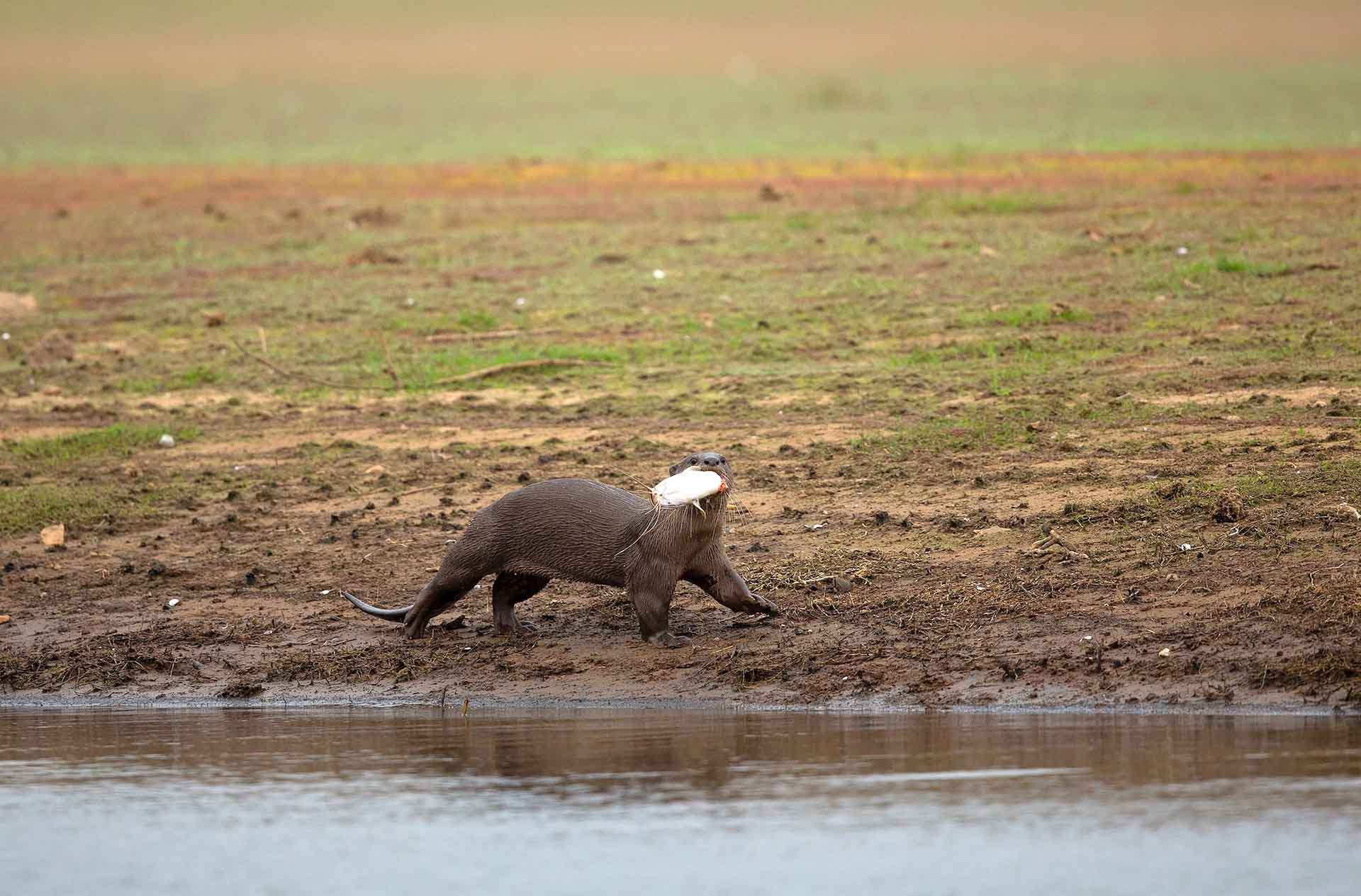 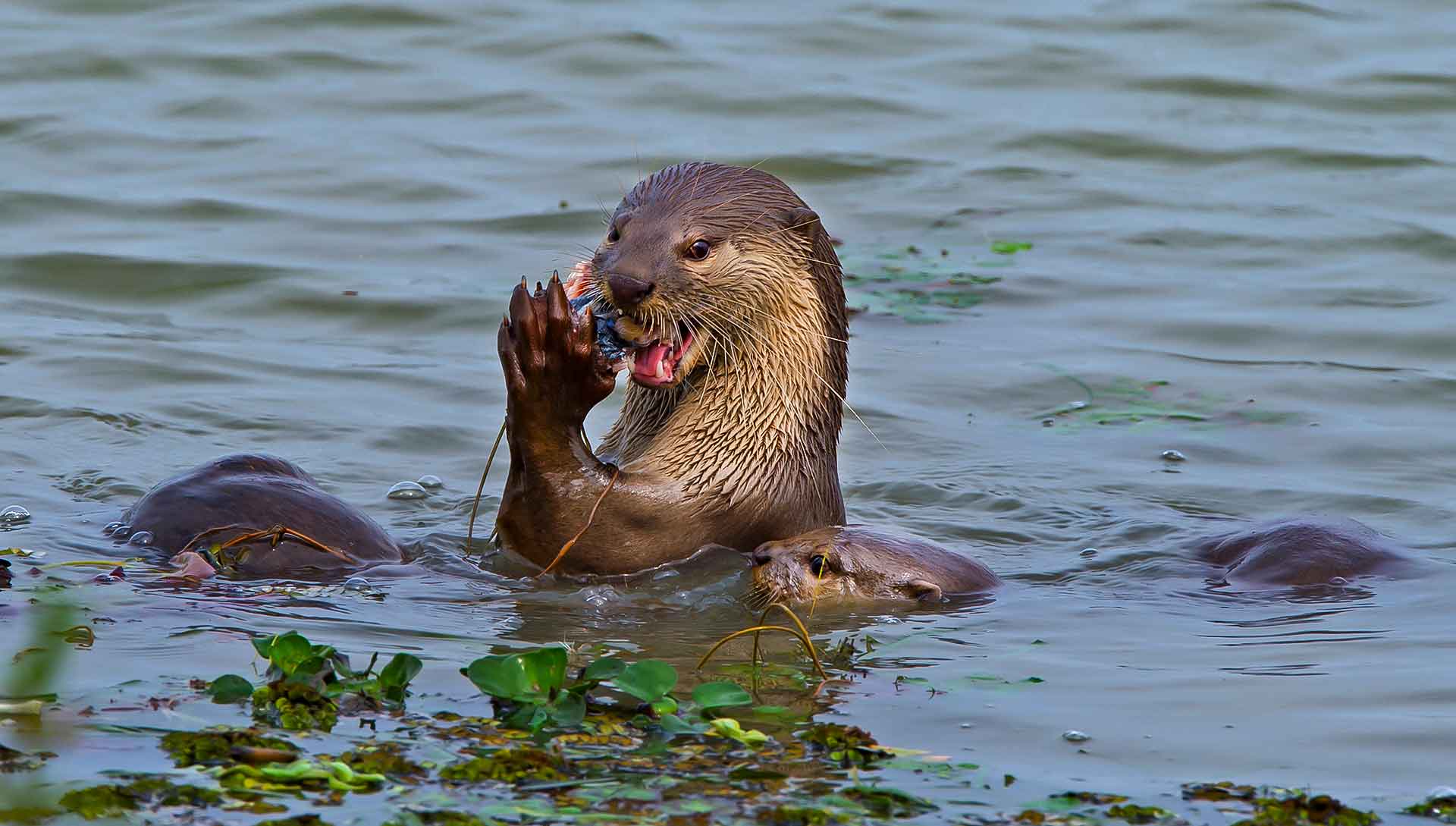 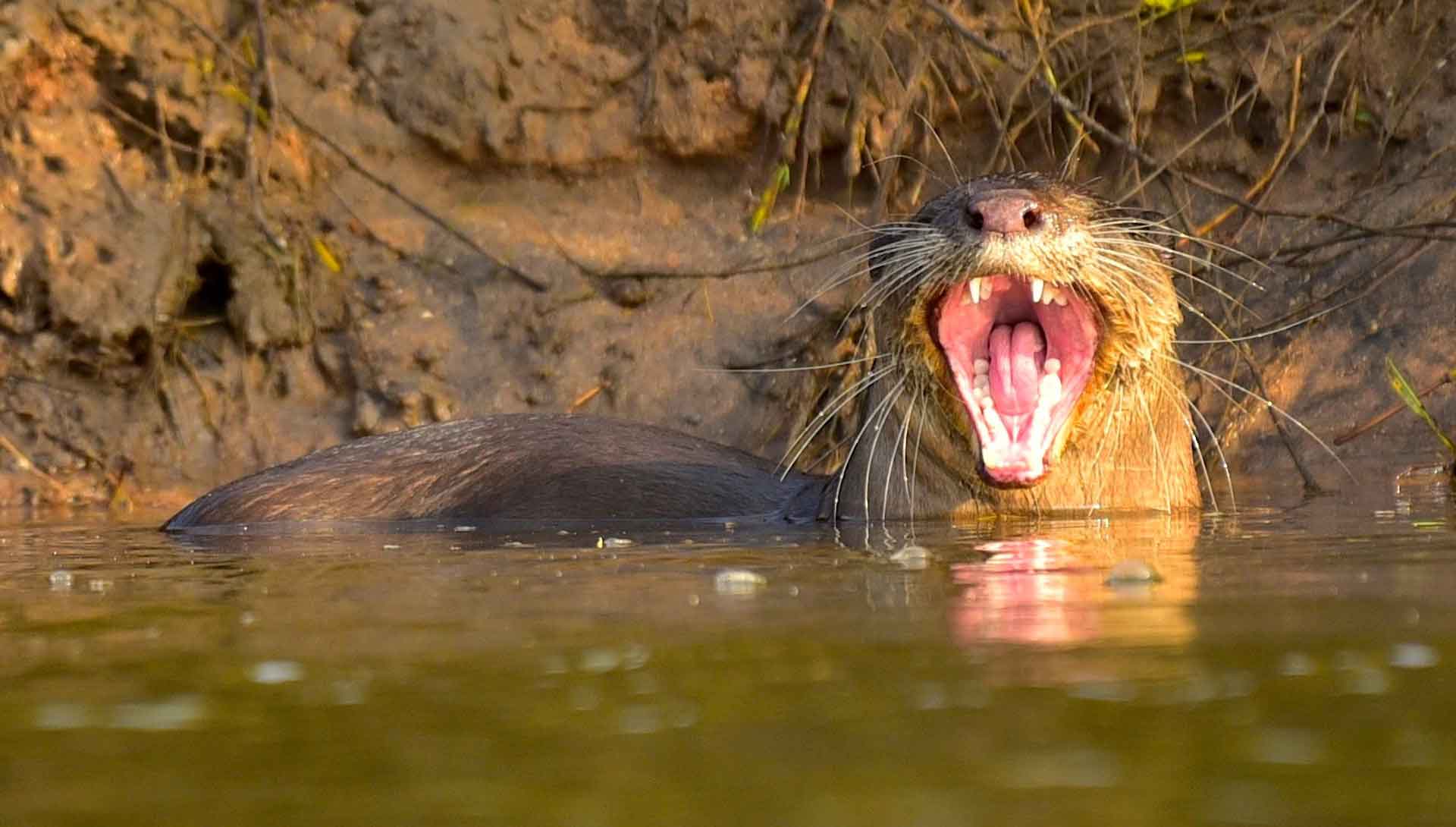 Most unmodified rivers in the tropics support a high diversity and abundance of fish. Smooth-coated otters need a healthy river full of prey (fish) to survive. Large webbed feet and a rudder-like tail help propel them forward. Smooth-coated otters are equipped with a phenomenal dental arsenal, and there’s no escape for a slippery fish once the otter has found its grip. Otters may either hunt cooperatively or capture and consume fish on their own. Fights between group members are rare.
Photos: Dhritiman Mukherjee (top left and above left), Phillip Ross (top right), Srikanth Mannepuri (above right) 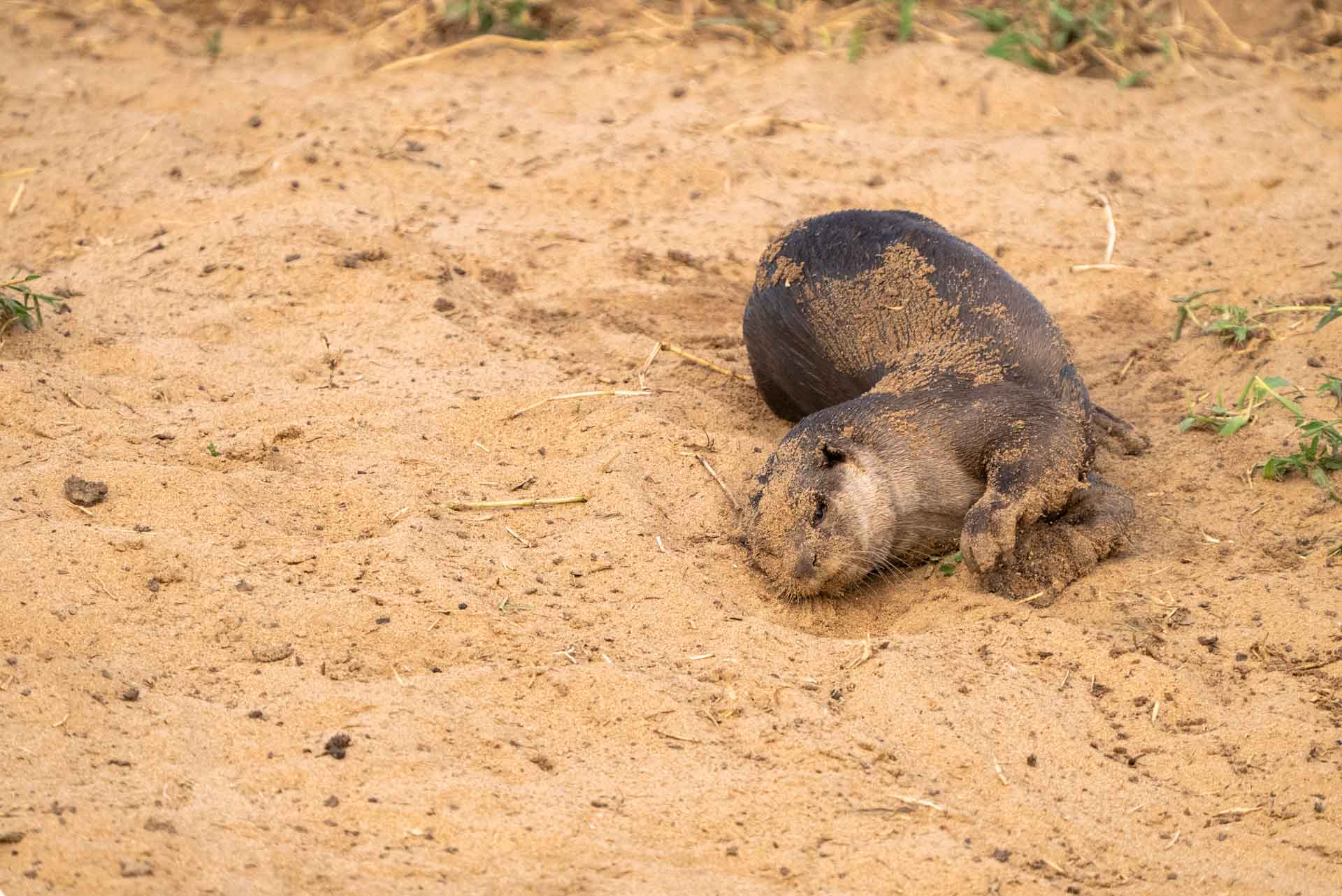 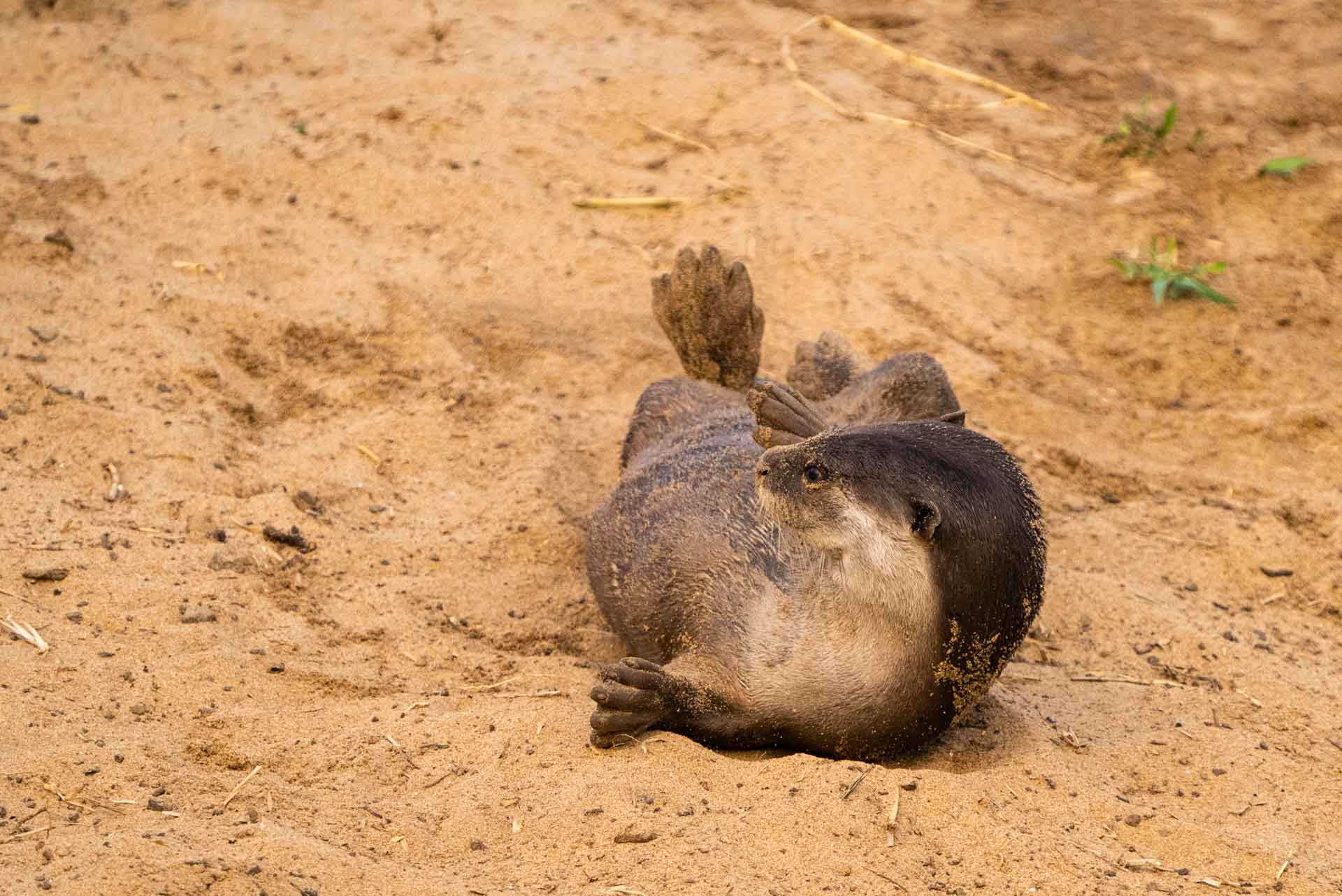 Exposed sandbars and sandbanks are the centres of the otter universe. They are sites for play, grooming sessions, sleep, basking, and serve as signalling posts. Otters use sandbanks as communal latrines, frequently marking the same spot with their spraint (faeces) and urine. They also use sandbanks to dry their fur after a bout of hunting or play.
The explosive growth of Bangalore city fuelled rampant and indiscriminate mining of sand all along the Cauvery, and large sandbanks now survive only within the Cauvery Wildlife Sanctuary.
Photos: Sugandhi Gadadhar and Rana Belur (part of their worksupported by the National Geographic Society) 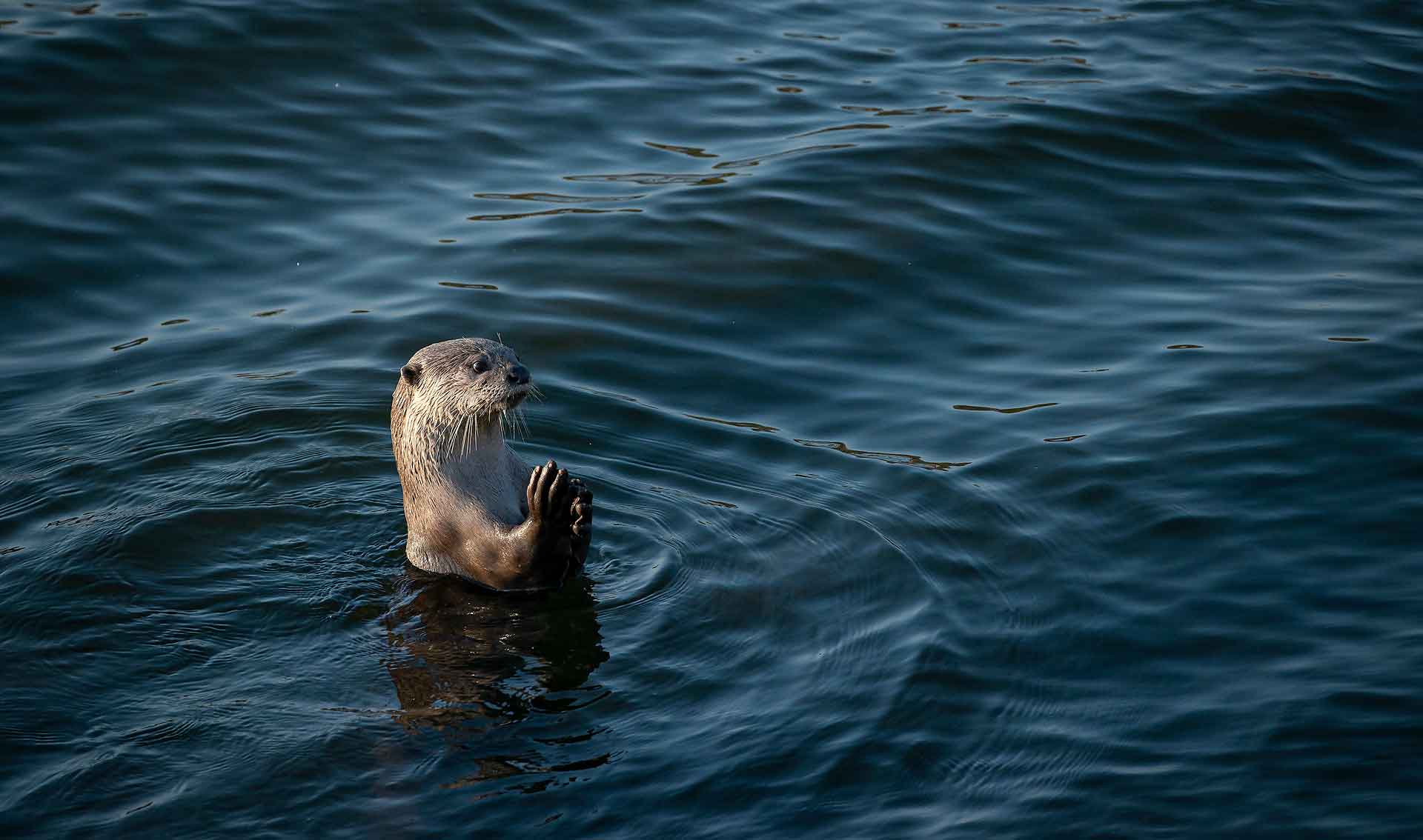 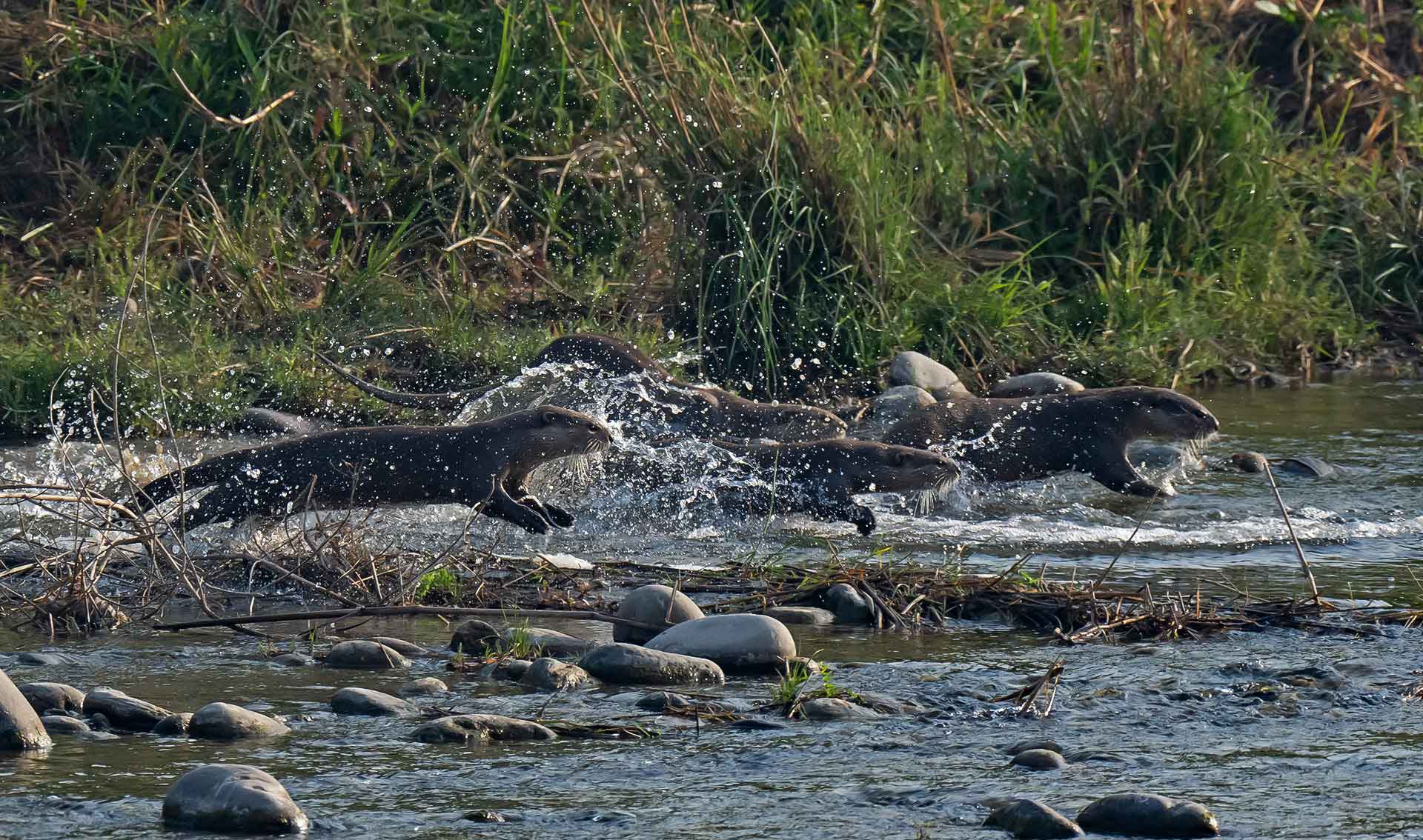 Smooth-coated otters are also commonly seen in reservoirs, but these are suboptimal habitats for them. A reservoir replacing a flowing, productive river vastly modifies and degrades their complex and dynamic habitat. It’s a change from a lotic (moving water) to a lentic (still water) ecosystem. Studies on the giant otter in Brazil (along a dammed river) show that the population remained depressed from habitat loss. Wildlife destinations such as Kabini or Periyar are good examples of how dams can alter and affect smooth-coated otter habitats and populations.
Photos: Shivang Mehta (left), Dhritiman Mukherjee (right) 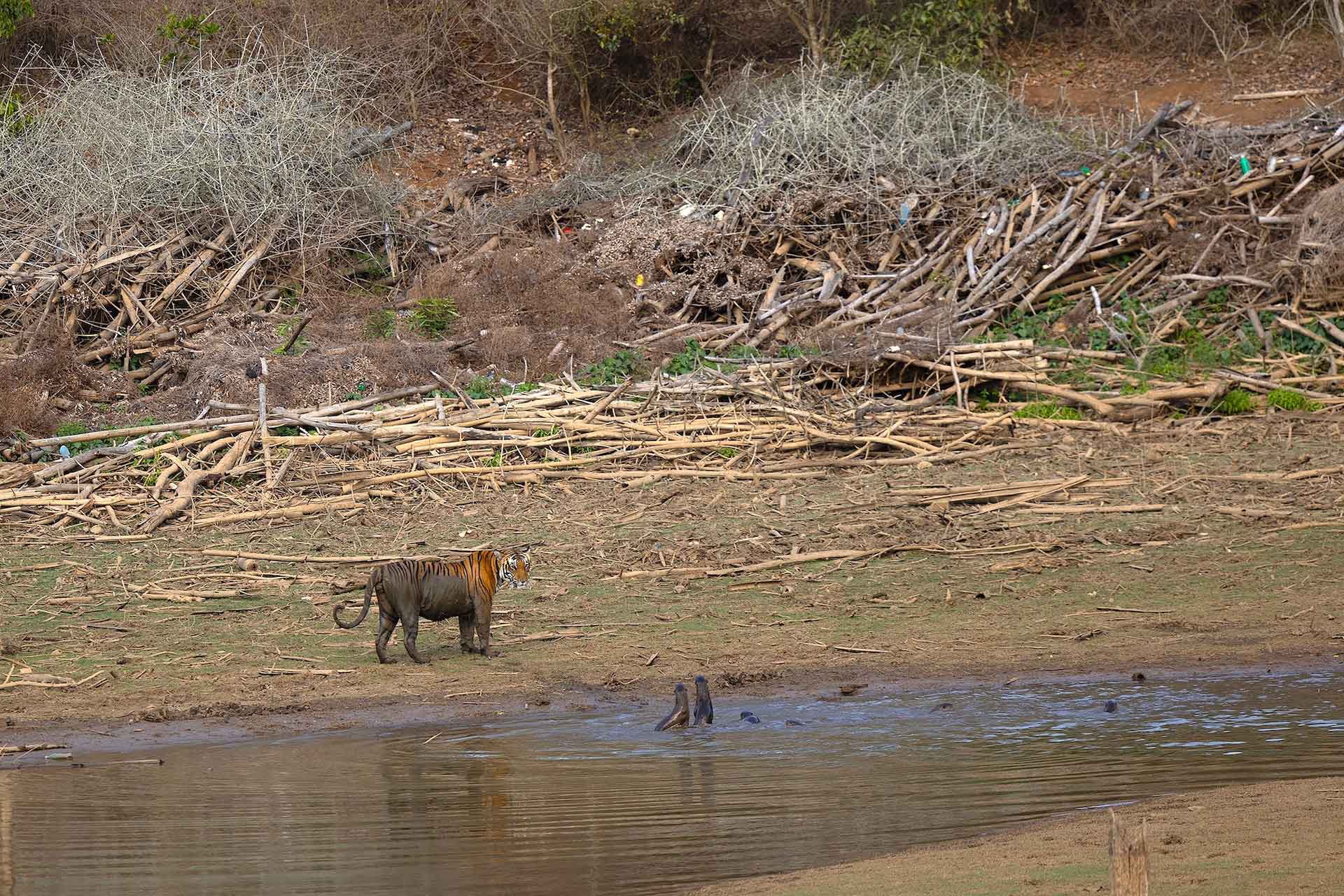 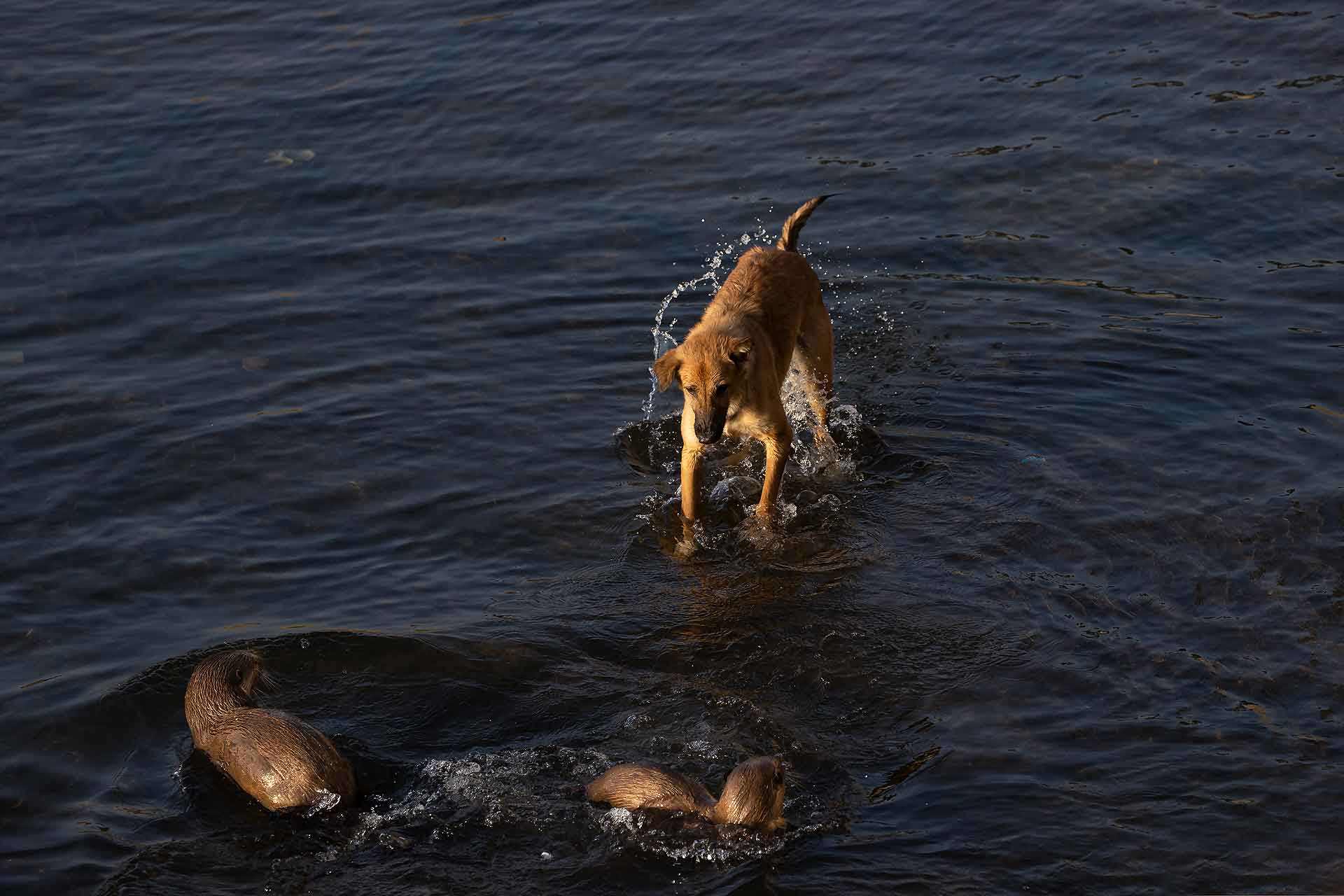 Adult smooth-coated otters have been observed harassing mugger crocodiles in areas where they co-occur. The crocodile usually leaves the spot and returns when the otter threat has passed. In Kabini, there have been instances where inquisitive otters have confronted tigers, but these encounters are rare. A group of adult smooth-coated otters faces very little predation pressure while in the river, but young pups and otters on riverbanks might be vulnerable to free-ranging stray dogs.
Photos: Phillip Ross (left), Shivang Mehta (right) 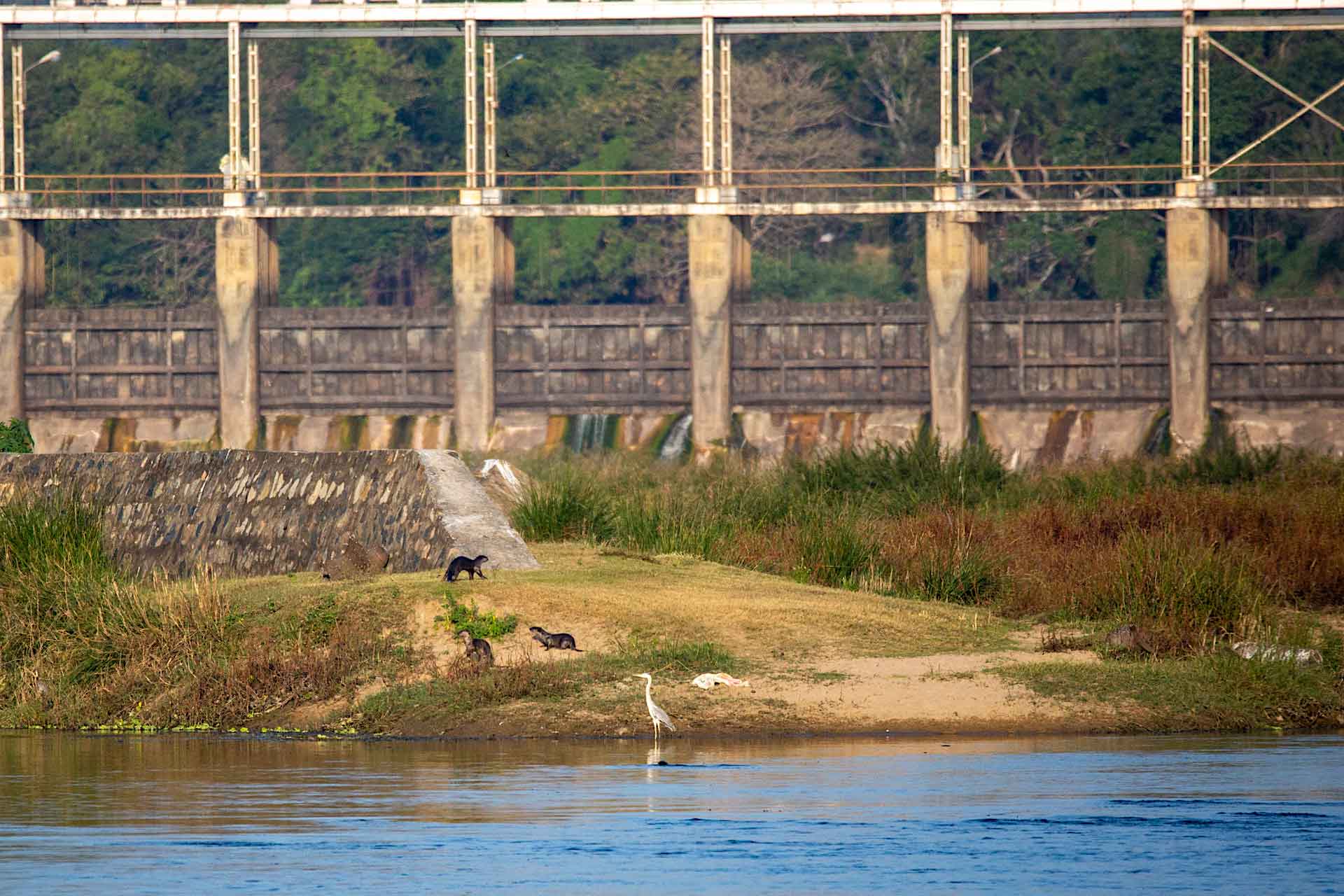 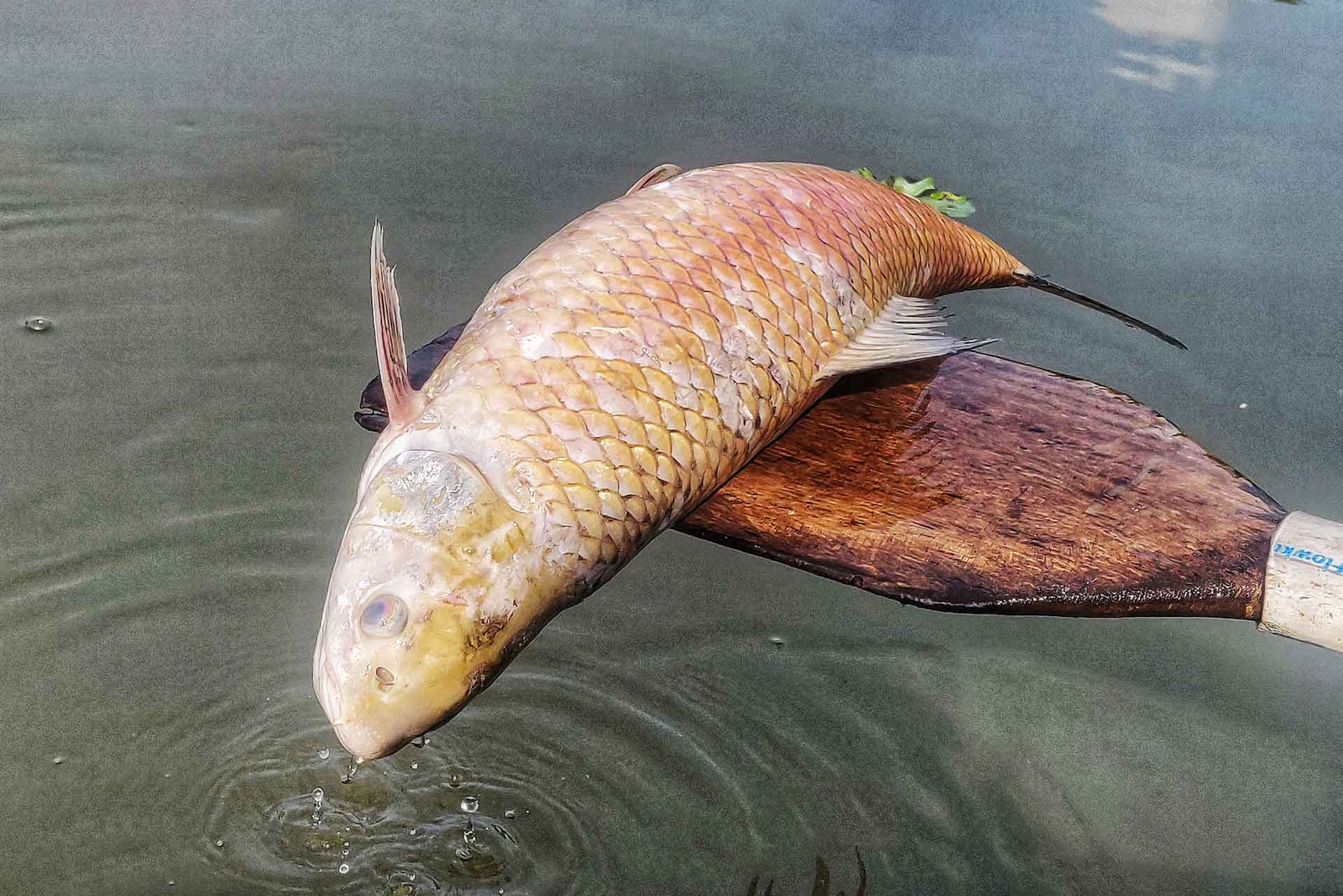 Wherever they flow, rivers are the centre of human-modified landscapes, a thin thread that weaves all life together. Across large parts of the country, smooth-coated otters and people co-exist. In Mysore district, Karnataka, the Cauvery, lifeline to tens of millions of people, still hosts a sizable population of otters. Fishers frustrated by declining fish catches are increasingly turning against otters who they see as direct competitors. But the reasons for declining yield are manifold and include unregulated sand mining, pollution, and intensive fishing itself. Additionally, some fishers illegally resort to using explosives for an easy catch, and the collateral damage from this is massive—the killing and maiming of not just adult fish but fingerlings, birds, and otters. Lack of adequate livelihood safeguards and support from government agencies affects the relationship between fishers and otters. Now more than ever, it is essential to engage directly with local stakeholders (fishers, farmers, etc.) to ensure smooth-coated otters have the space and tolerance that enables this top territorial predator to live in the shadow of humans.
Photos: Sugandhi Gadadhar and Rana Belur (part of their work supported by the National Geographic Society)

Cyana Moths: The Case of the Curious Cocoon