Sunbirds are everywhere in India, in dense forests and concrete jungles buzzing with human activity — all we have to do is pay attention

Watching a sunbird in action elicits a dazzling kind of joy. These tiny, jewel-toned birds are members of the Nectariniidae family and are often spotted with their slender, curved beaks deep inside the base of flowers. Some species hover above blooms while they drink nectar, others perch on a convenient branch as they forage, while some cheeky birds will puncture the base of the flower to gain access to the sugars, especially if they are imbedded deep within. Observing them is an uplifting experience that drives home just how beautiful nature can be.

There are over 150 species of sunbirds in the world, “found in multiple habitats from evergreen and scrub forest to coastal mangroves, Himalayas, and areas of human habitation,” says Shashank Dalvi, a scientist and conservationist currently working in the Nicobar Islands. “In India, sunbirds are found in all habitats, except high-elevation desert areas.”

India has 15 members of the Nectariniidae family, including 13 species of sunbirds and two species of spiderhunters. As the family name suggests, these birds survive largely on floral nectar and are crucial pollinators in the ecosystems they inhabit. In addition to nectar, sunbirds also eat insects such as ants, caterpillars, spiders, and small grasshoppers.

Indian sunbirds exist in a variety of habitats, from dense forests to urban parks in concrete jungles. “It doesn’t matter where you are — a crowded city, a small nature park, a huge wildlife sanctuary — some sunbird is always around; all you have to do is pay attention,” says Dalvi.

If you take a mindful walk through a park in Mumbai or Bangalore, you might catch sight of a purple sunbird or a purple-rumped sunbird flittering about a copper pod tree. Both are widely distributed. Other species, such as Vigors’s sunbird and crimson-backed sunbirds, are found exclusively in the Western Ghats.

Each species has distinct behaviour, breeding pattern, and preferred diet — much of which is still being researched. Here’s what we do know about these feisty little birds.

Sunbirds are among the smallest of avians. Most species, like this ruby-cheeked sunbird (Chalcoparia singalensis), weigh less than ten grams. Ruby-cheeked sunbirds are found across Southeast Asia in moist forests and forest-adjacent habitats. “This is a predominantly low-elevation species, found in the lowland evergreen forests of northeast India,” says Dalvi. “They have much straighter bills compared to other species and are commonly seen in Assam’s Kaziranga and Nameri National Park.” Photo: Imon Abedin Cover photo: A male green-tailed sunbird in West Bengal. Photo: Arindam Bhattacharya 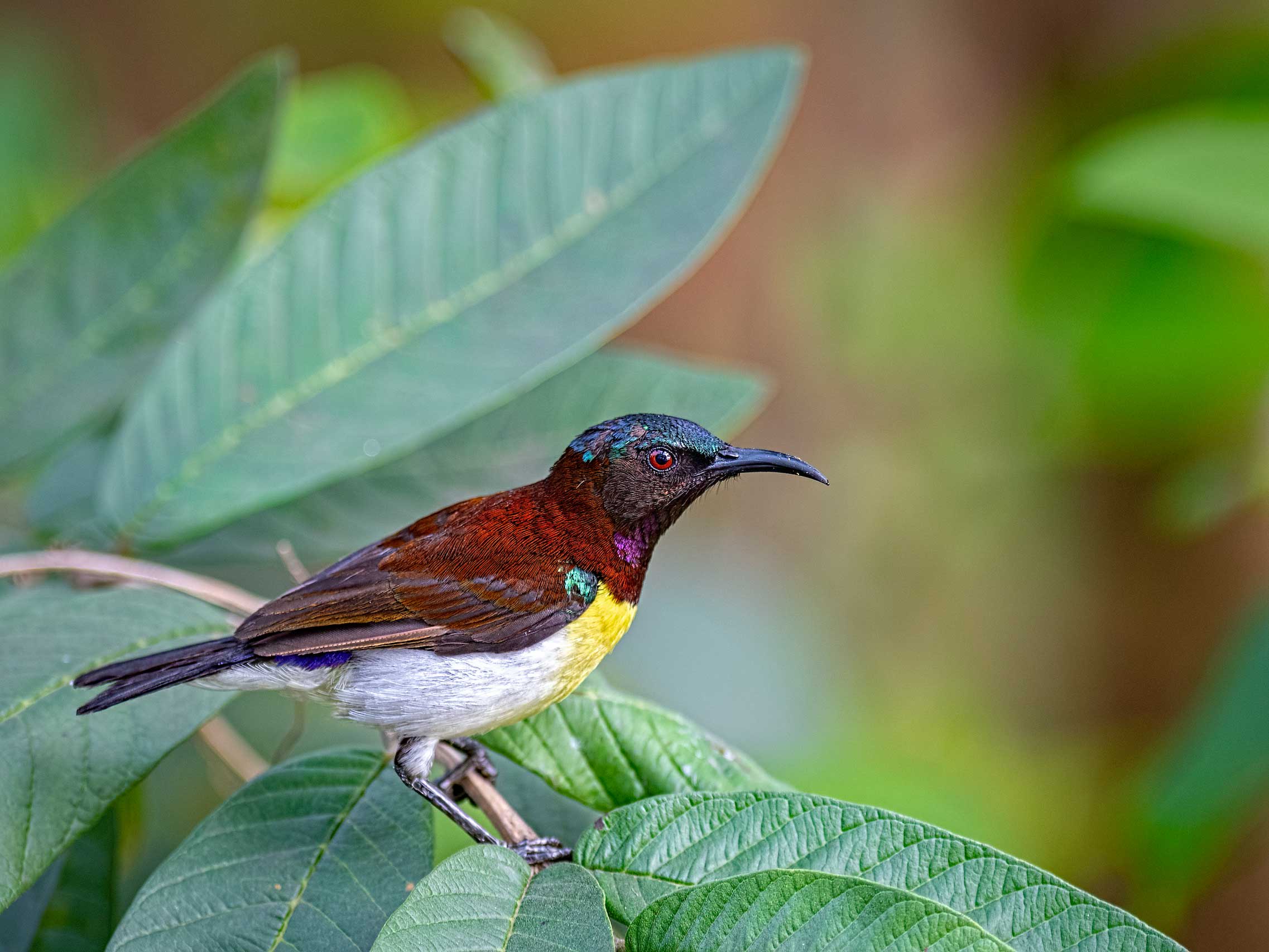 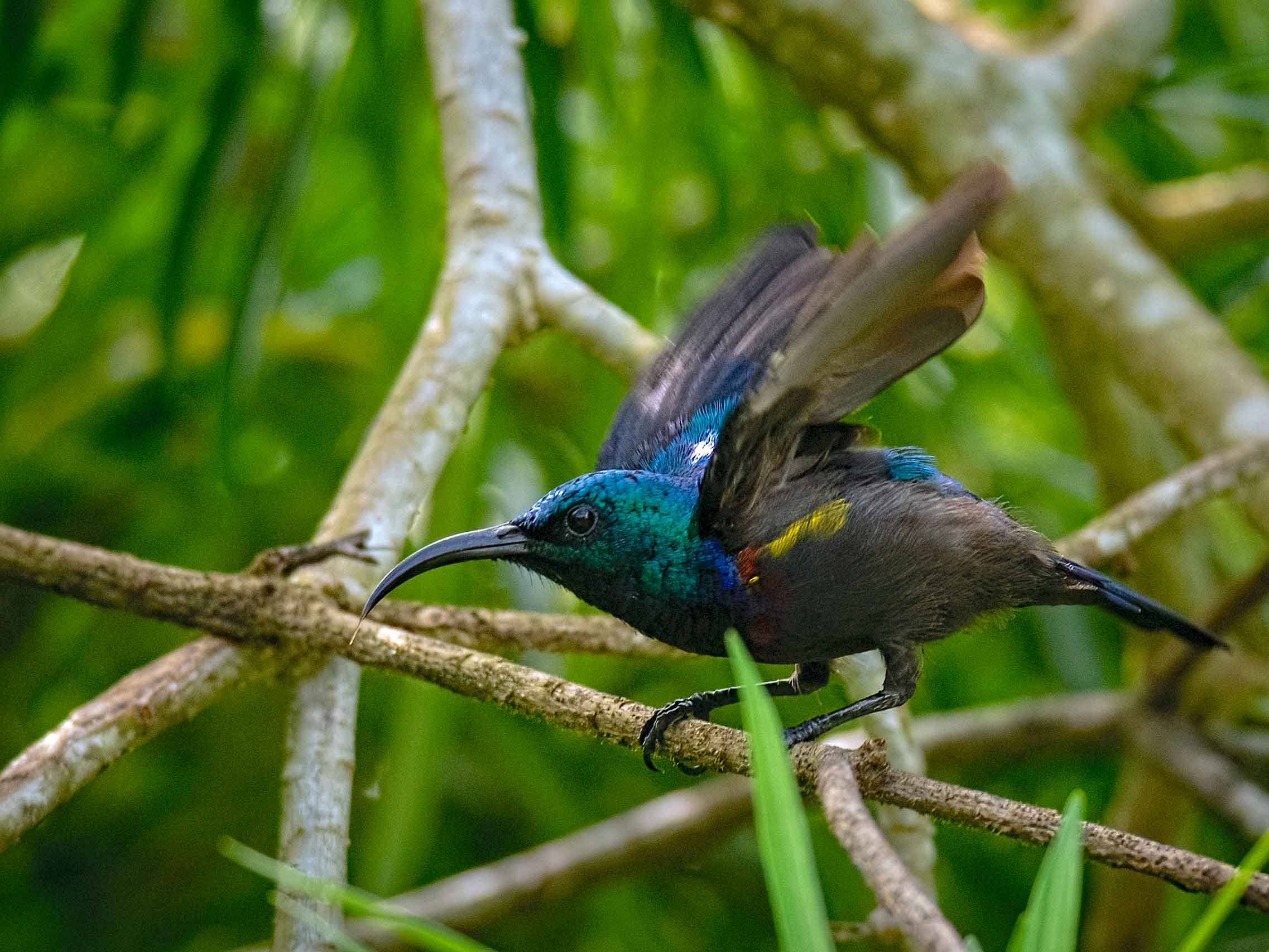 Different species of sunbirds have differently shaped beaks, which correlate with the flowers that form most of their diet. For example, the purple-rumped sunbird (left) has a shorter bill than Loten’s sunbird (right), though their range overlaps significantly. Thus, both species can occupy the same habitat without competing for resources. The purple-rumped sunbird (Leptocoma zeylonica) and Loten’s sunbird (Cinnyris loteniu) are among the most widely distributed of the sunbirds found in India. “Crows in Mumbai are especially fond of the eggs of the purple-rumped sunbird,” says researcher and ornithologist Tarun Menon. “And cats too.” Photos: Arpan Saha 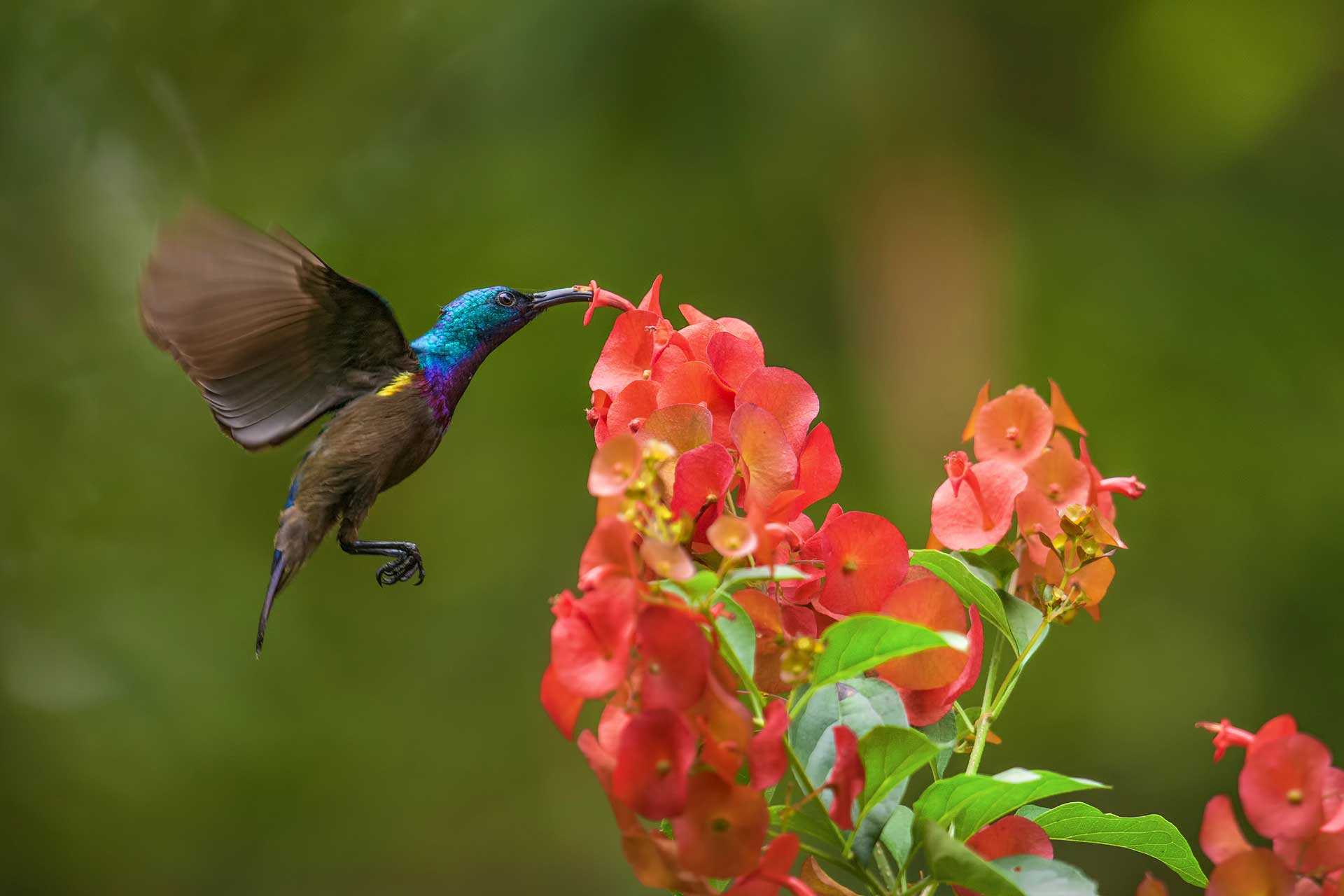 All sunbirds are swift and skilled fliers, always on the move, like this Loten’s sunbird. “The first thing one notices about sunbirds is their energy levels,” says Dalvi. “They can hover mid-air, which requires incredible amounts of energy, and they can hang upside down while sipping nectar, which is unusual for birds.” Photo: Soumabrata Moulick 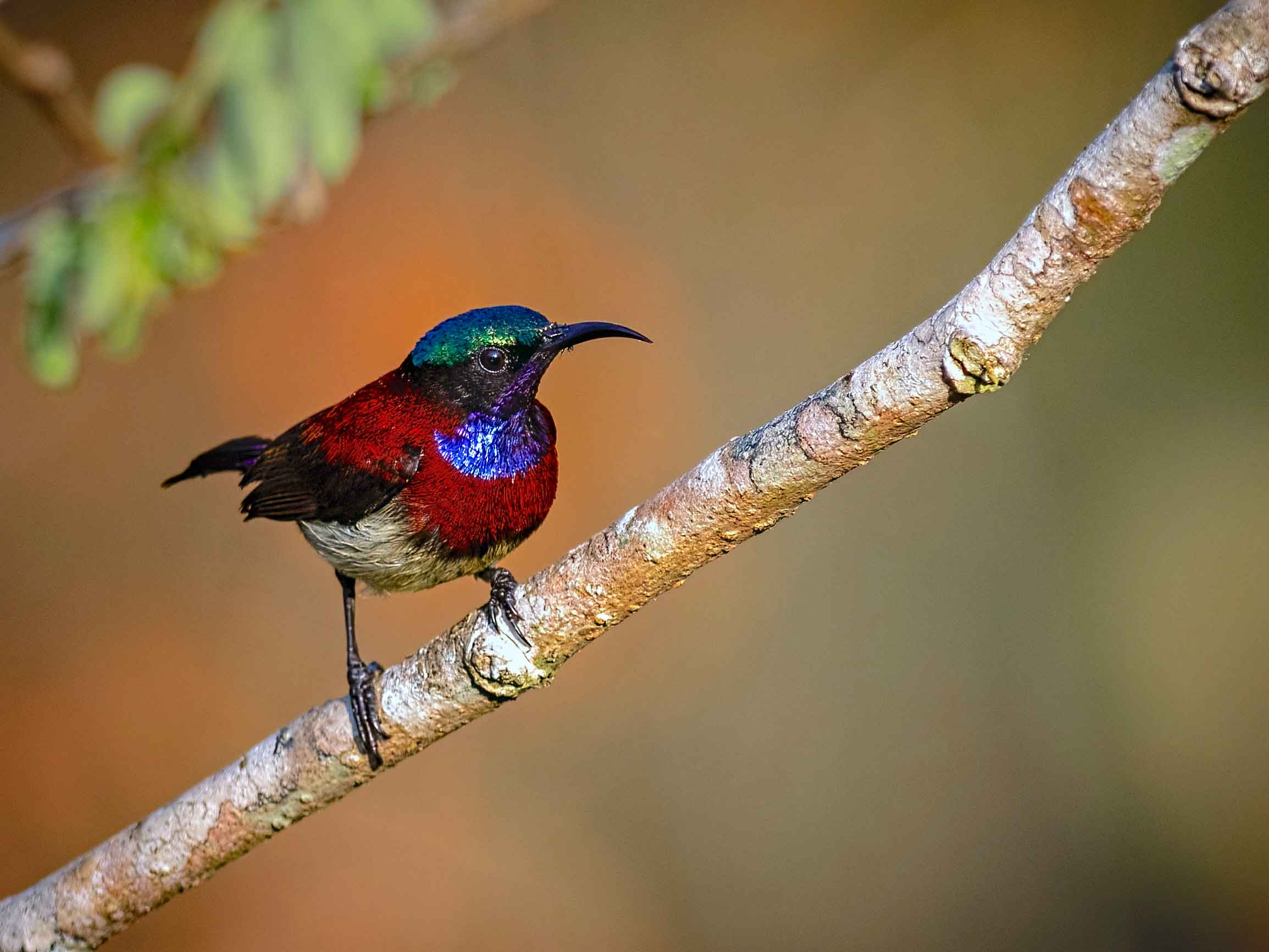 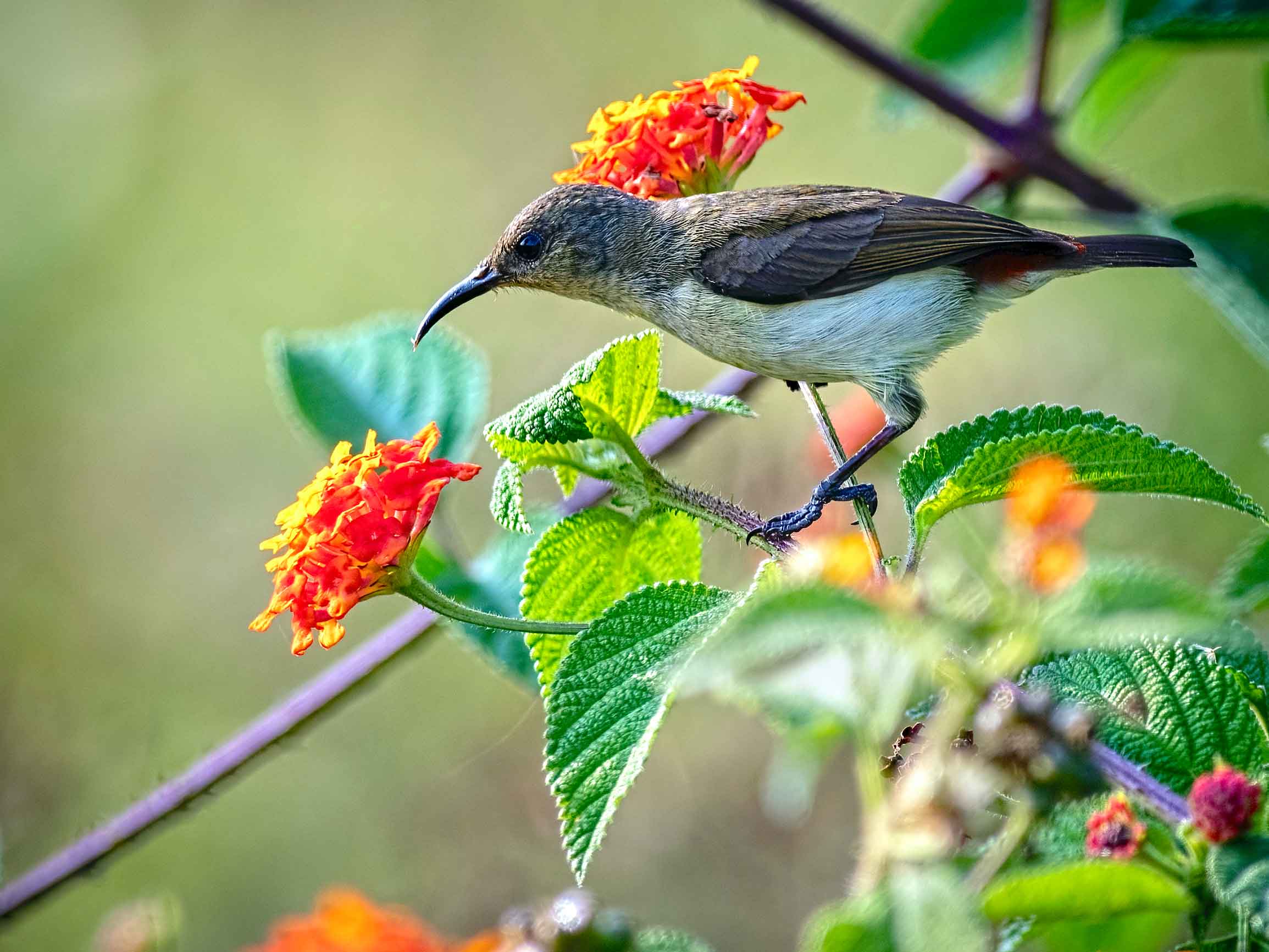 Sunbirds display remarkable sexual dimorphism, meaning males and females look significantly different from each other. A case in point is the crimson-backed sunbird (Leptocoma minima). Males (left) have vivid metallic plumage with blue and deep blood-red patches, while females (right) have more delicate colouring in pale shades of brown and yellow. Crimson-backed sunbirds are among the smallest species in the sunbird family and are endemic to the Western Ghats of India. Photos: Arpan Saha

Van Hasselt’s sunbird (Leptocoma brasiliana) occurs across Southeast Asia, but its range in India is limited to the Karimganj district in Assam, which borders Bangladesh. eBird describes the species as an “attractive medium-sized sunbird of lowland forests, from coastal scrub forests to inland evergreen forests.” The male (left) has iridescent feathers, while the female (right) has grey plumage with a butter-yellow underside. Photo: Mike Prince from Bangalore, India, CC BY 2.0 (left), Rofikul Islam (right)

During the breeding season, sunbirds build hanging nests, suspending them from branches. The pouch-shaped nests are somewhat similar to those of weaverbirds but not as neat-looking on the outside. They line the insides with soft materials such as moss, cobwebs, and feathers. “In Northeast India, nests typically have a lot of moss,” explains Dalvi, “but in the Western Ghats, nests have drier plant material. More browns, like the landscape.” (Above) Olive-backed sunbirds (Cinnyris jugularis) are familiar residents of the Andaman and Nicobar Islands. Unlike other species that prize camouflage, this little bird often makes nests suspended from wires, close to human habitation. Dalvi explains that this is because “there are fewer predators on these islands, so the birds have less need for camouflage.” Photo: Koshy Koshy from Faridabad, Haryana, India, CC BY 2.0

Sunbirds are not born with dazzling plumage. Chicks of both sexes have fuzzy, mostly brown-grey feathers at birth. Juvenile plumage lasts a few months, and then the birds begin to develop colour. Like this purple sunbird (Cinnyris asiaticus), some species display temporary eclipse plumage, which has features of both male and female plumage. Photo: Arijit Mondal

Sunbirds might seem delicate as dew, but they can be fierce too. In the presence of some predators, species like this green-tailed sunbird (Aethopyga nipalensis) will gang up with other birds in the vicinity to attack the source of a threat. This behaviour is called mobbing, and sunbirds are notorious for instigating it. “I’ve seen a mixed group of sunbirds, bulbuls, and magpie robins, surrounding four juvenile Indian scops owls,” says Menon. “The sunbirds were shrieking loudly, slapping their wings, and generally being aggressive. Sometimes, they’ll go as far as pecking the owl.” Photo: Arpan Saha 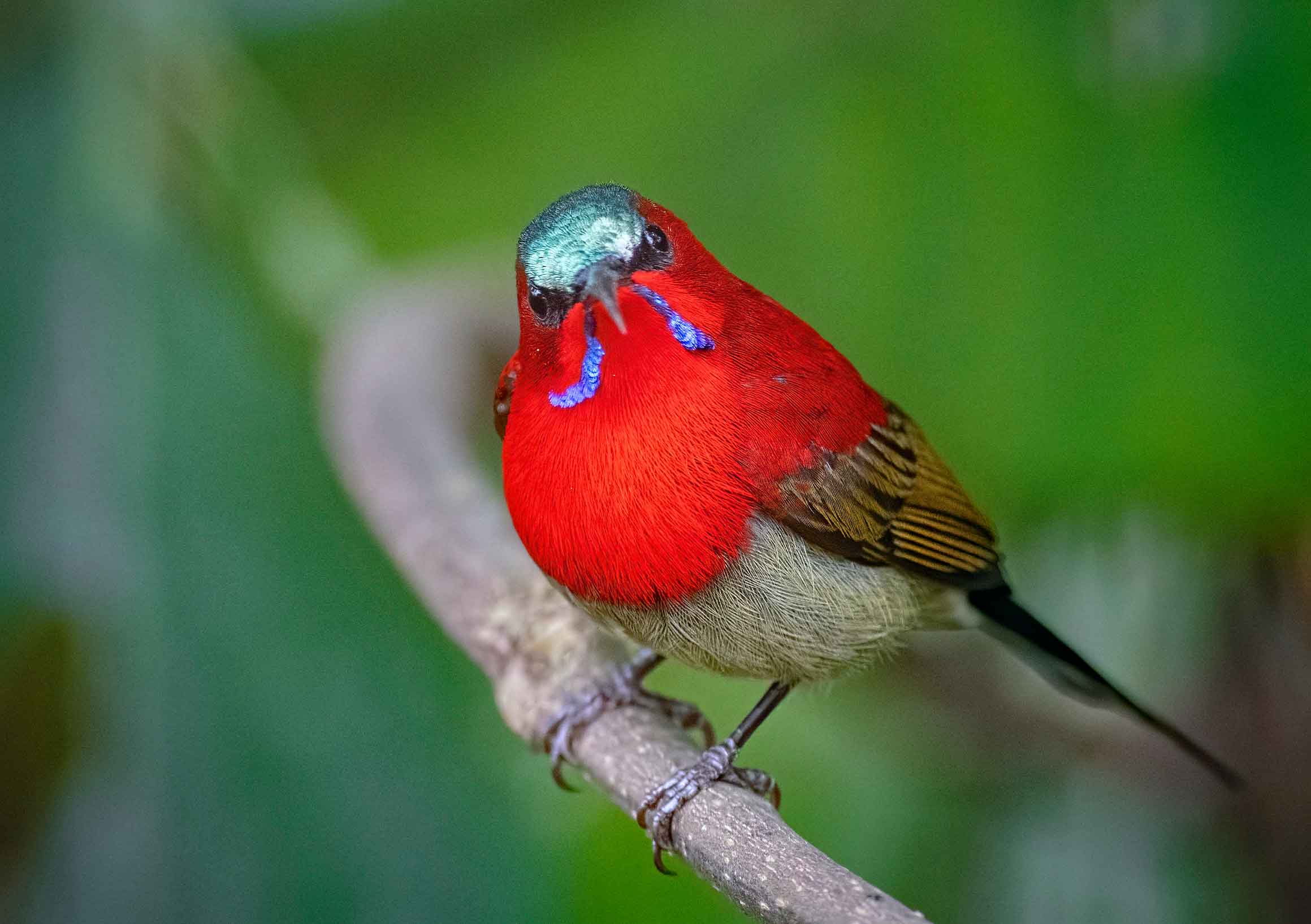 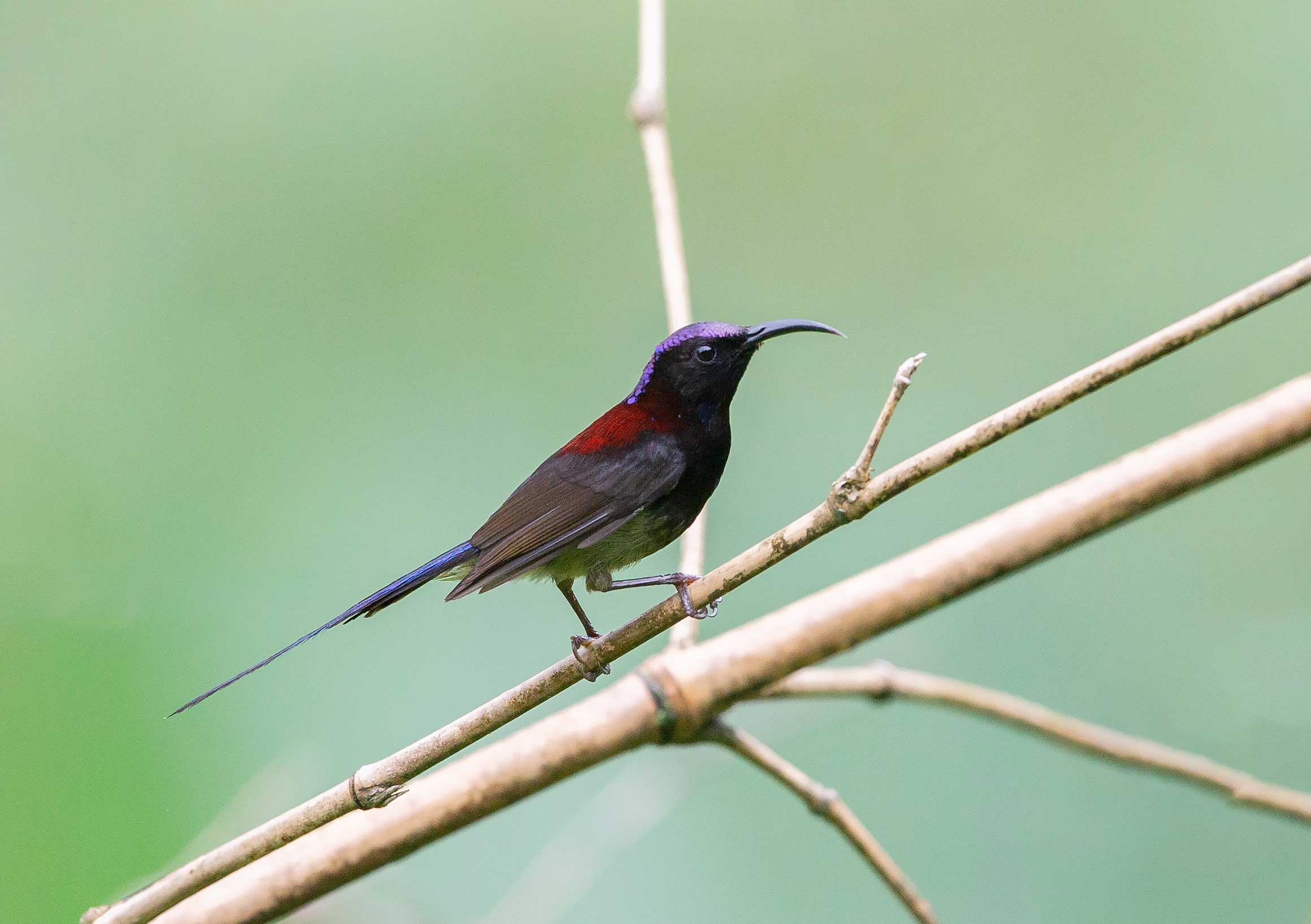 In the Himalayas, different elevations have different populations of sunbirds. “In the plains and the foothills of the Himalayas, under 1,000 m, the crimson sunbird (left) is commonly seen,” explains Menon. “Between 1,000 and 1,500 metres, the black-throated sunbird (right) is more regular, while the green-tail sunbird is the chief pollinator in the Middle Himalayas (1,500-2,200 metres).” Photos: Arpan Saha (left), Rofikul Islam (right) 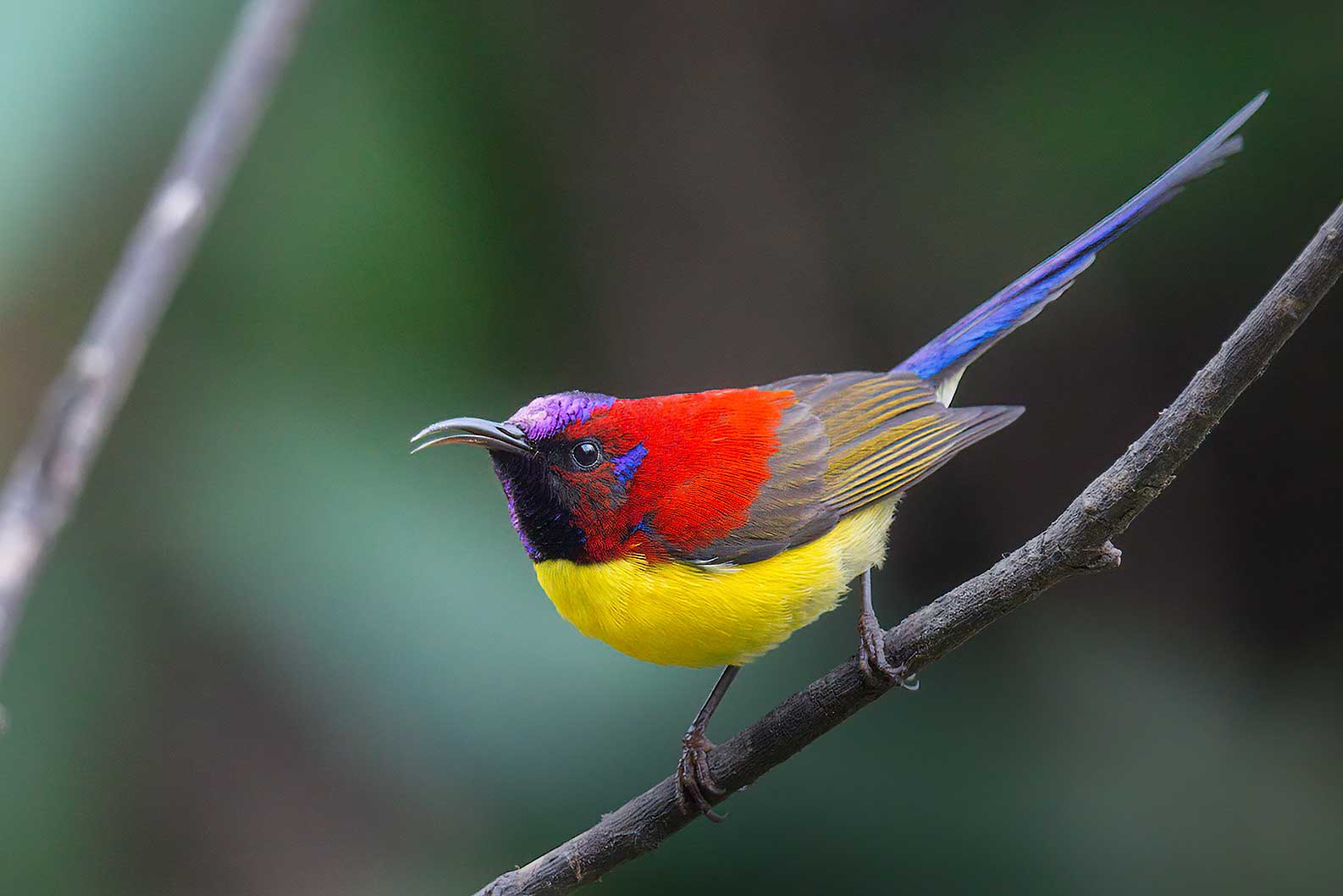 Mrs Gould’s sunbird (Aethopyga gouldiae) is one of few high-elevation sunbird species in India found above 2,200 metres. The bird was named by ornithologist John Gould, after his wife Elizabeth, an acclaimed lithograph painter in the 1800s. This sunbird has been recorded breeding at altitudes as high as 4,250 metres. Photo: Arindam Bhattacharya 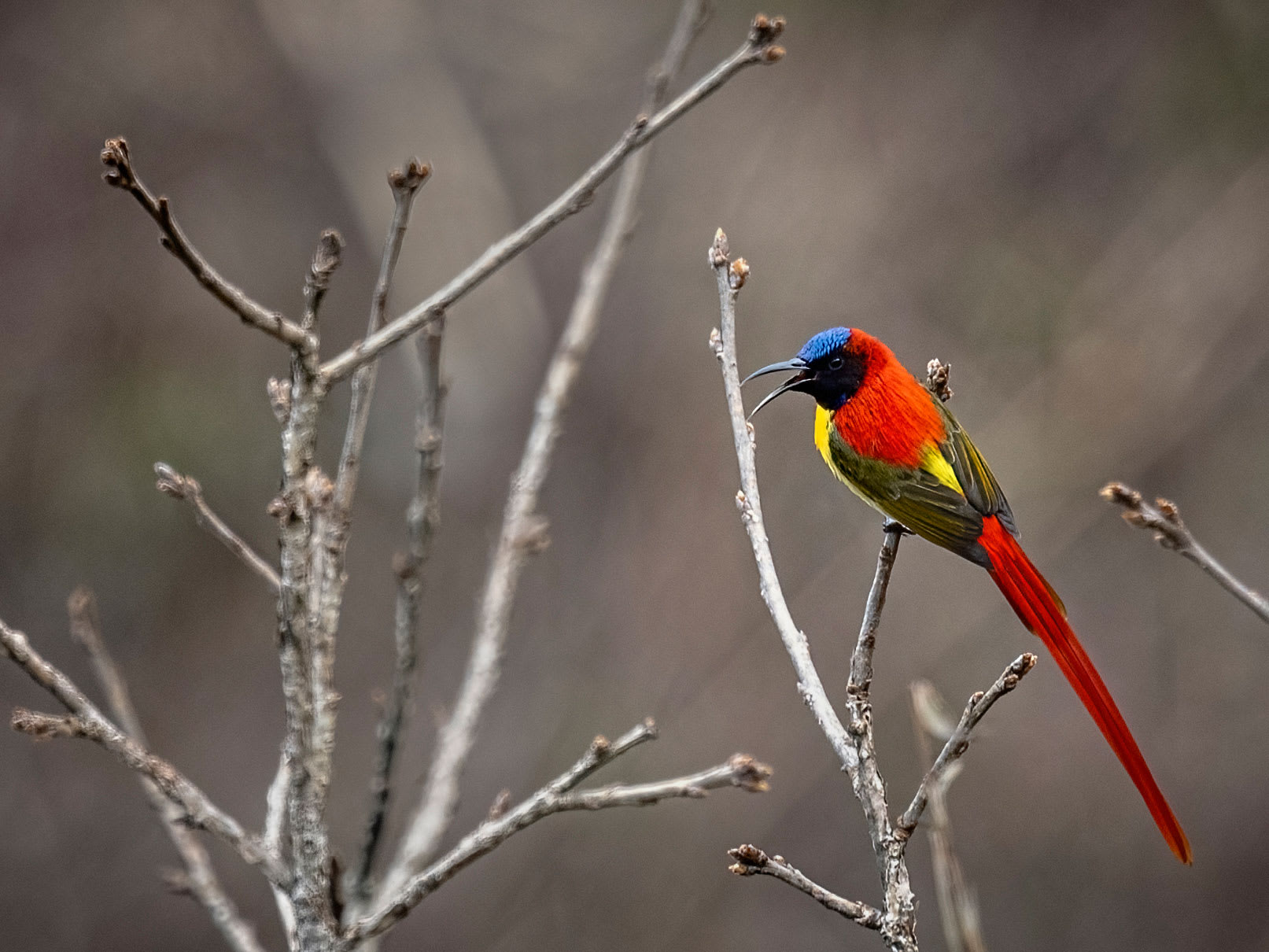 The striking fire-tailed sunbird (Aethopyga ignicauda) is a high-altitude species fond of oaks, conifers, and rhododendrons. Like many residents of the upper mountains, fire-tailed sunbirds migrate to lower elevations during winter so they have access to food. “They would arrive in Nainital around November,” recalls Menon, who was part of a research project in Uttarakhand. “They do not migrate en masse; it’s more like the birds arrive in ones and twos and stay until March-April.” Photo: Arpan Saha 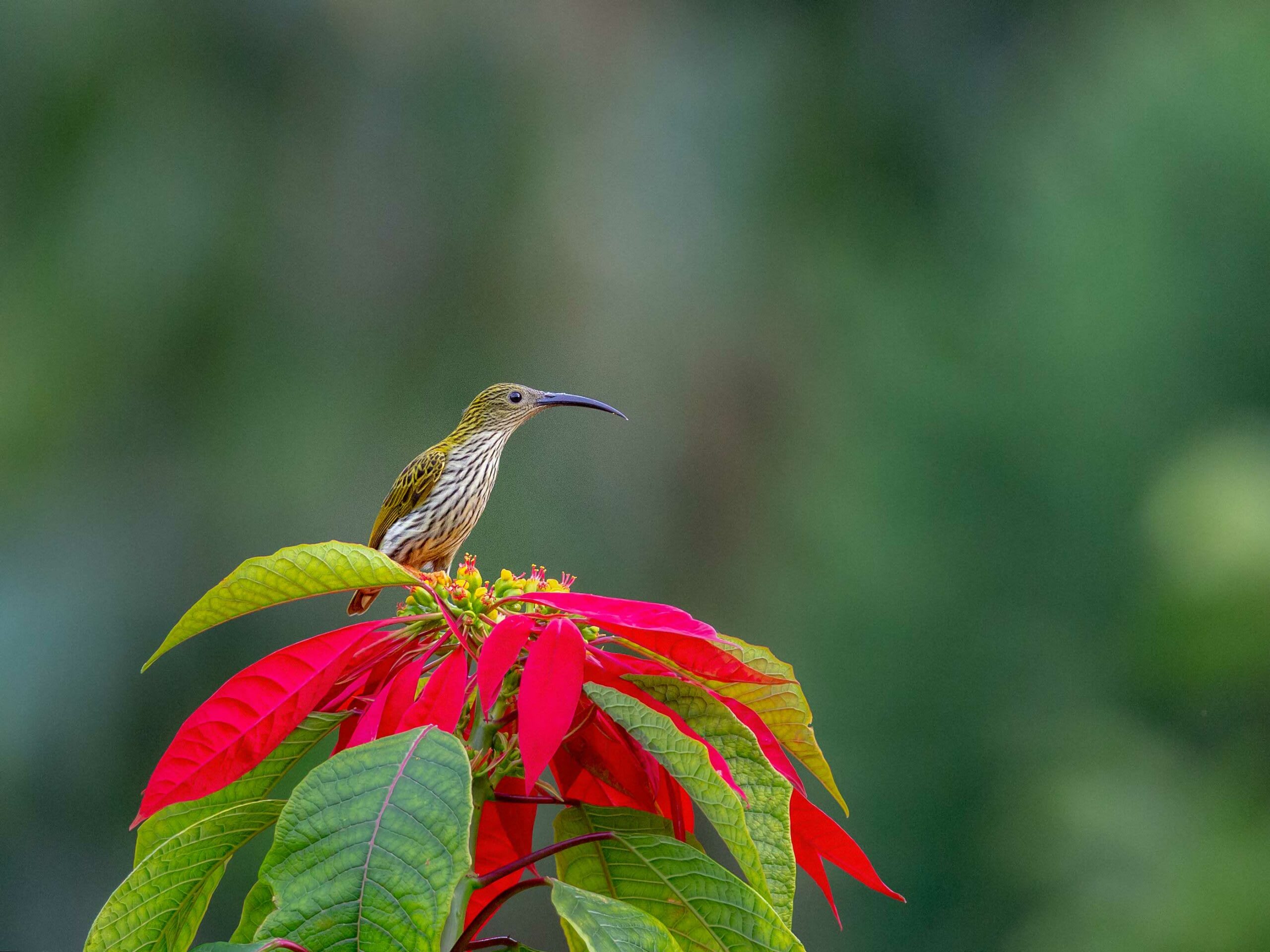 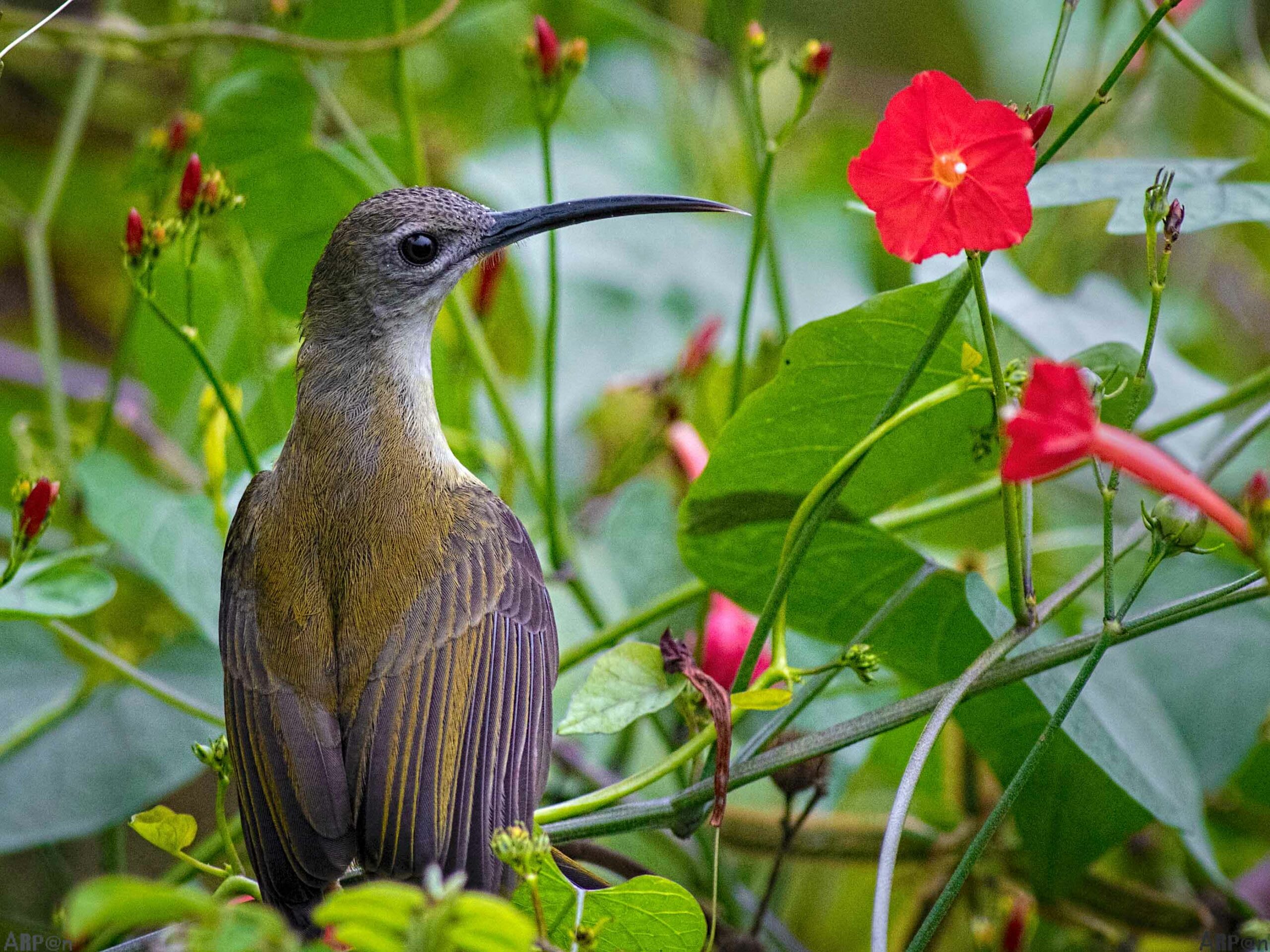 Spiderhunters are often grouped with sunbirds because they belong to the family Nectariniidae. There are two species of spiderhunters in India: the streaked spiderhunter (left) (Arachnothera magna) and the little spider hunter (right) (Arachnothera longirostra). Though both survive on a diet of nectar and insects, they are particularly fond of banana blossoms. Photos: Arindam Bhattacharya (left), Arpan Saha (right)