Dune Watching in the Thar: Skinks, Scorpions, and Other Small Wonders of the Desert Ecosystem

The diversity of a desert landscape might not be apparent, but it is ever present, and a joy to observe 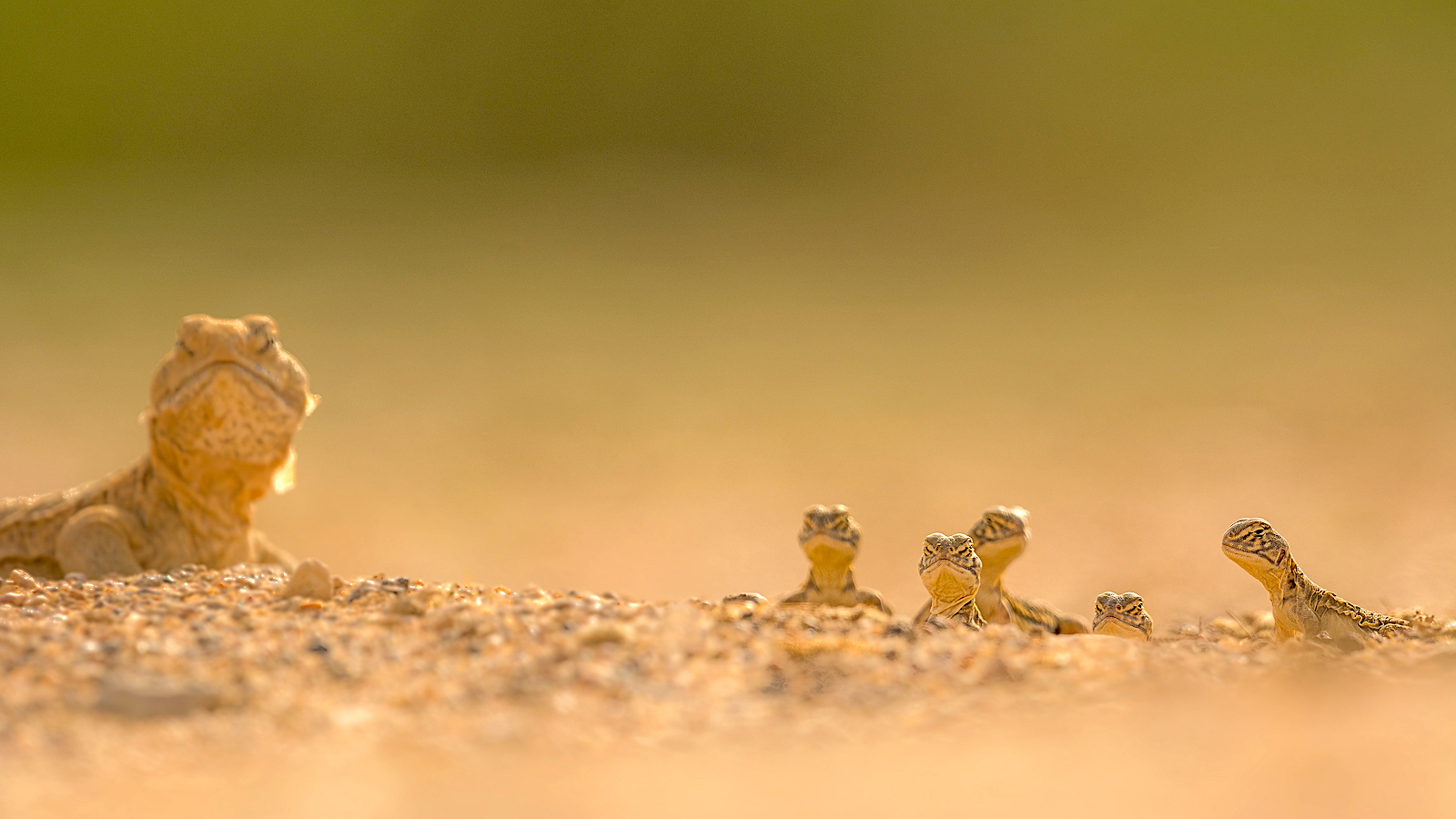 Gazing upon the sand dunes of the Desert National Park in Rajasthan, it is hard to comprehend that this landscape was once a throbbing tropical forest. Up until 60 million years ago, the region had towering trees, intricate river systems, and animals such as turtles, crocodiles, even dinosaurs from an earlier period. According to Unesco, fossil evidence of the Thar from the Jurassic Period indicates hot and humid climate, characterised by dense forests. The remains of these forests — “over 180-million years old” — can be observed at the Wood Fossil Park at Akal, near Jaisalmer. The Park offers a rare glimpse into our planet’s dramatic past life, and a reminder that humans as a species are relative newcomers to the Earth. (Homo sapiens has been around for less than 300,000 years.)

The Thar Desert of today is shaped by a stark absence of surface water. The vast, arid ecosystem is spread over 2,00,000 sq km, and includes parts of Rajasthan, Punjab, Haryana, and Gujarat. It is characterised by sand, scrub, strong winds, and absurdly high day temperatures. To most humans, it can seem quite inhospitable, but there are a great many creatures, large and small, that have evolved, over several millenia, to thrive in precisely this habitat.

“They’re not always easy to spot,” says wildlife photographer and herpetologist Vipul Ramanuj, “but cracking the code of the desert is half the fun.” Ramanuj has been visiting the Thar for over twelve years now, for surveys, social conservation measures, and wildlife photo-tours, and knows the landscape and its inhabitants intimately. “It might seem like a barren habitat, but this could not be further from the truth,” he says in a phone interview from his home in Gujarat. This photo story is about the smaller creatures in and around Desert National Park, a protected region in Rajasthan that encompasses 3,162 sq. km.

Snoop around rocky patches in the Thar Desert and you might catch a fleeting glimpse of the Persian gecko (Microgecko persicus). This crevice-dwelling lizard is “one of the smallest Indian species of gecko,” Ramanuj says, with adults growing to a maximum size of one inch in length. Since they inhabit rocky habitats, the biggest threat faced by this little gecko, is mining for minerals. It is also coveted in the pet trade but is extremely hard to sight and catch. Photo: Vipul Ramanuj Small is beautiful in the Thar Desert, and every creature in the habitat has adaptations to ensure it thrives in this landscape. Along the many reptiles that live here, are spiny-tailed lizards (Saara hardwickii), a species of agamid that survives on plants and flowers. Cover photo: Soumabrata Moulick

More commonly sighted is the Sind sand gecko (Crossobamon orientalis), which can be found amidst sand dunes, along village roads, and outside people’s homes. “Observational evidence suggests it is an important part of the diet of birds, snakes, even spiders,” says Ramanuj, “but it is hard to say for sure without proper research.” Most species of gecko do not have eyelids, and frequently lick their eyes to clear the optical lens of sand and dirt. Photos: Vipul Ramanuj

The Indian fringe-toed lizard (Acanthodactylus cantoris) has its own unique adaptation: a shovel-shaped snout that it uses to dig holes and inspect leaf litter for hidden insects to eat. Found around clumps of grass and bushes, this day-foraging lizard is captivating to watch, especially when “it raises its fore and hind legs alternately, to minimise contact with the hot sand,” says Ramanuj. They survive on a diet of termites, ants, the grub of insects like beetles. Photo: Vipul Ramanuj

Skinks are also members of the lizard family, distinguished by their smooth, finely scaled bodies, and long tails. There are several species of skink in the Thar, such as this member of the genus Eurylepis, and they are all swift and exquisitely camouflaged. “I have seen this particular species only once in my 12 years of visiting the Thar,” says Ramanuj. Photo: Vipul Ramanuj

“Evolutionarily speaking, skinks are in between snakes and lizards,” explains Ramanuj, and some species move like their slithering cousins too. Take for example, the sand fish (Scincus scincus): a member of the skink family that is named after a fish, and looks like a small, pale snake. Measuring 3-4 inches in length, the sand fish spends much of the day submerged in the sand, surfacing only to eat, poop, and breed. “We watch for shifting patterns in the sand — a clue that a sand fish might be just under the surface.” Photo: Vipul Ramanuj 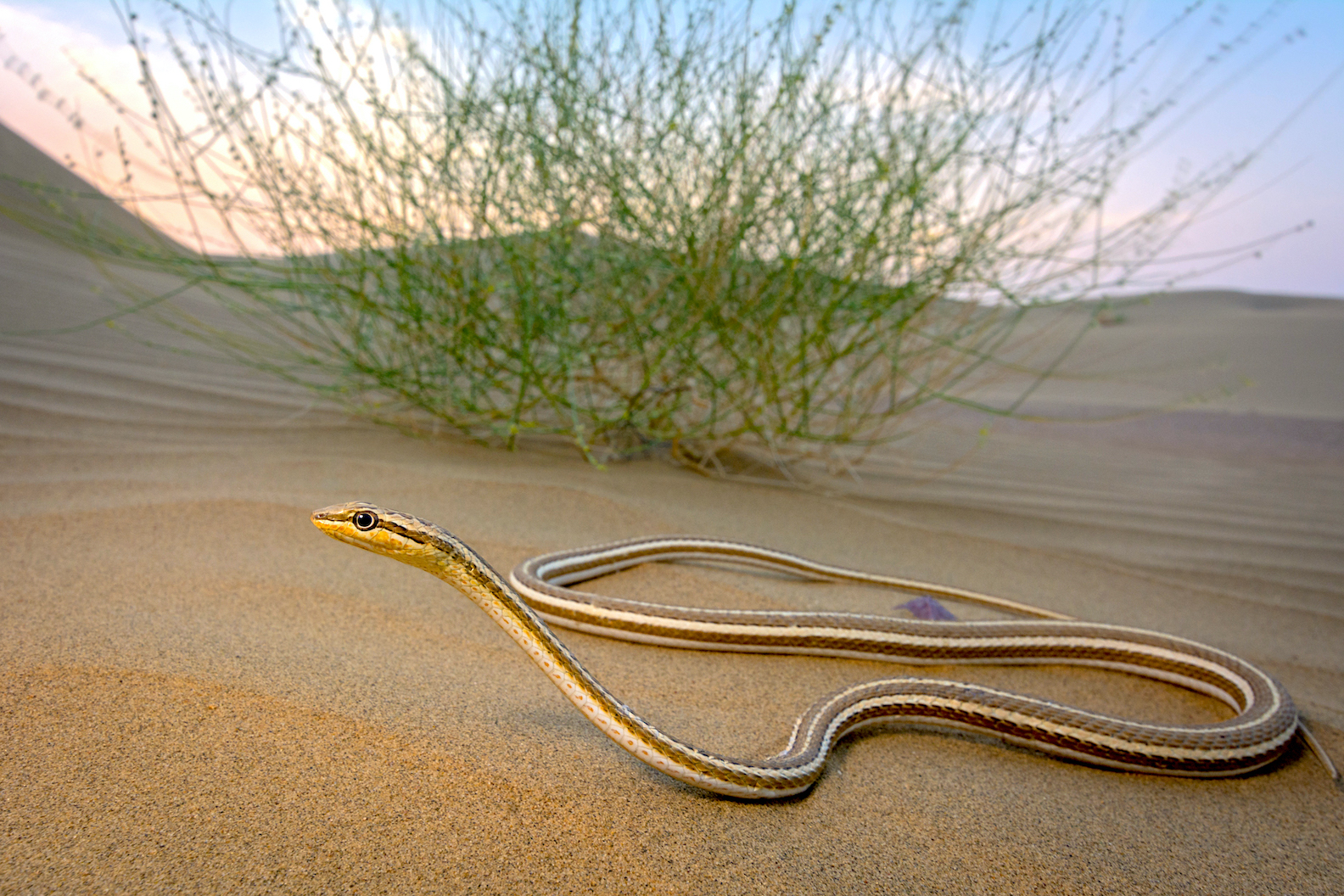 The Afro-Asian sand snake (Psammophis schokari) is one of many snake species that live in the Thar Desert. The mildly venomous reptile has a long, thin body with brown striations that provide camouflage in the desert landscape. It survives on a diet of rodents and lizards, and is sometimes called “whip snake”, for the speed and agility with which it hunts down prey. Photo: Soumabrata Moulick

The red sand boa (Eryx johni, left) and glossy-bellied racer (Coluber ventromaculatus, right) and are non-venomous residents of the Thar Desert. Both are relatively harmless to humans, but the boa has suffered tremendously due to superstitious belief. The unusual species has a pipe-like body that does not taper at the tail-end, leading to its moniker as a ‘two-headed snake’. “Some people are terrified of the snake,” says Ramanuj, “others believe it brings wealth, and buy the snake to keep it in captivity.” Since its price on the black market is determined by weight, “the snake is sometimes force-fed ball bearings to increase its value.” Photo: Dhritiman Mukherjee (left), Photo: Soumabrata Moulick (right)

Sochurek’s saw-scaled viper (Echis carinatus sochureki, left) is among the most venomous snakes in the Thar. This sub-species of the saw-scaled viper is larger in size than its counterparts from the Western Ghats, with adults growing up to two feet in length. In contrast, the Sindh awl-headed snake (Lytorhynchus paradoxus, right) is more slender, and distinguished by its long, pointed face, which it uses to burrow into the sand. Photo: Vipul Ramanuj (left), Photo: Soumabrata Moulick (right)

The sand is like a veil in the Thar, sheltering species of all shapes and sizes. Among the many creatures that live just under the surface, are scorpions such as Buthacus agarwali, pictured here with an insect it has just hunted. Scorpions are small but formidable predators that keep insect populations in check, maintain harmony in the desert ecosystem. Photo: Soumabrata Moulick

Insects are the most populous group in the desert (and most landscapes), as they form the primary prey base for numerous creatures. Among the many insects that live in the Thar are beetles, moths, butterflies, bees, wasps, and grasshoppers. Some of these survive on plant matter, and others like the sand wasp (Steniolia spp. right) and robber fly (left) are predatorial species that feed on other insects. The desert is also home to parasitic species such as the red mite that latch on to hosts such as the robber fly for resources. Photos: Vipul Ramanuj

Dung beetles are among the most entertaining species in the Thar desert, frequently seen rolling balls of carefully collected poop, which they consume for nutrition and also to lay eggs so the larvae that come out can feed on readily available food. They are small in size but Herculean in strength, capable of carrying loads several times their body weight. Photo: Vipul Ramanuj 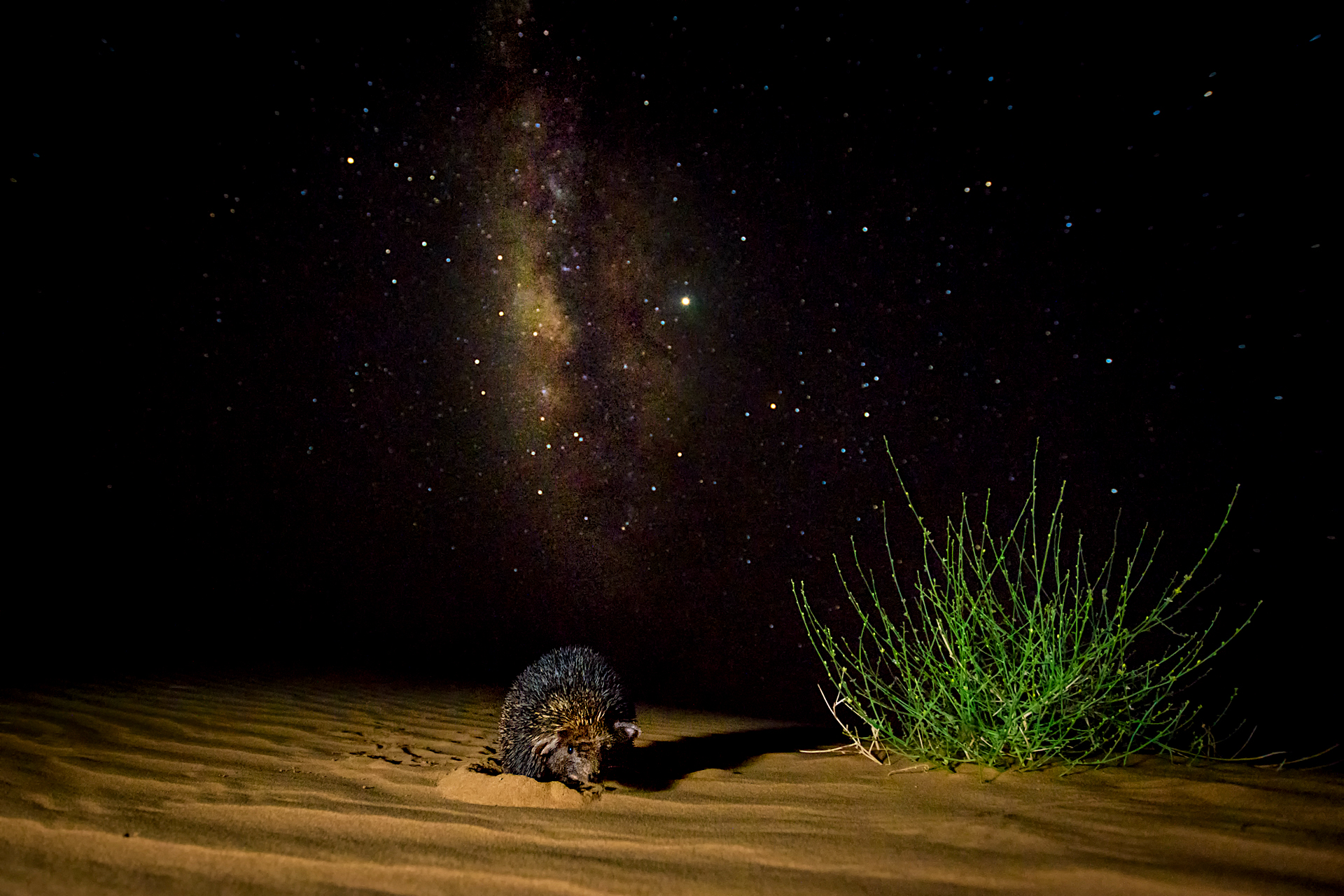 Desert nights are magical: the weather cools, stars glitter like diamonds, and nocturnal species like scorpions, snakes, and the long-eared hedgehog emerge. Despite this diverse cast of characters, the Thar desert is degenerating. Large tracts are being mined for minerals, while other areas are being converted into plantations in a misguided attempt to “greenify” the environment. “There are barely any real dunes left,” says Ramanuj, “so what will happen to all the species that live in and around them?” Like many conservationists, Ramanuj believes that the desert is a valuable ecosystem, that shelters varied flora and fauna, and a wealth of human culture too. Some of the oldest known civilizations were discovered in desert areas — what other treasures might they hold? Photo: Soumabrata Moulick