The diverse inhabitants of the tropical forests of Arunachal Pradesh 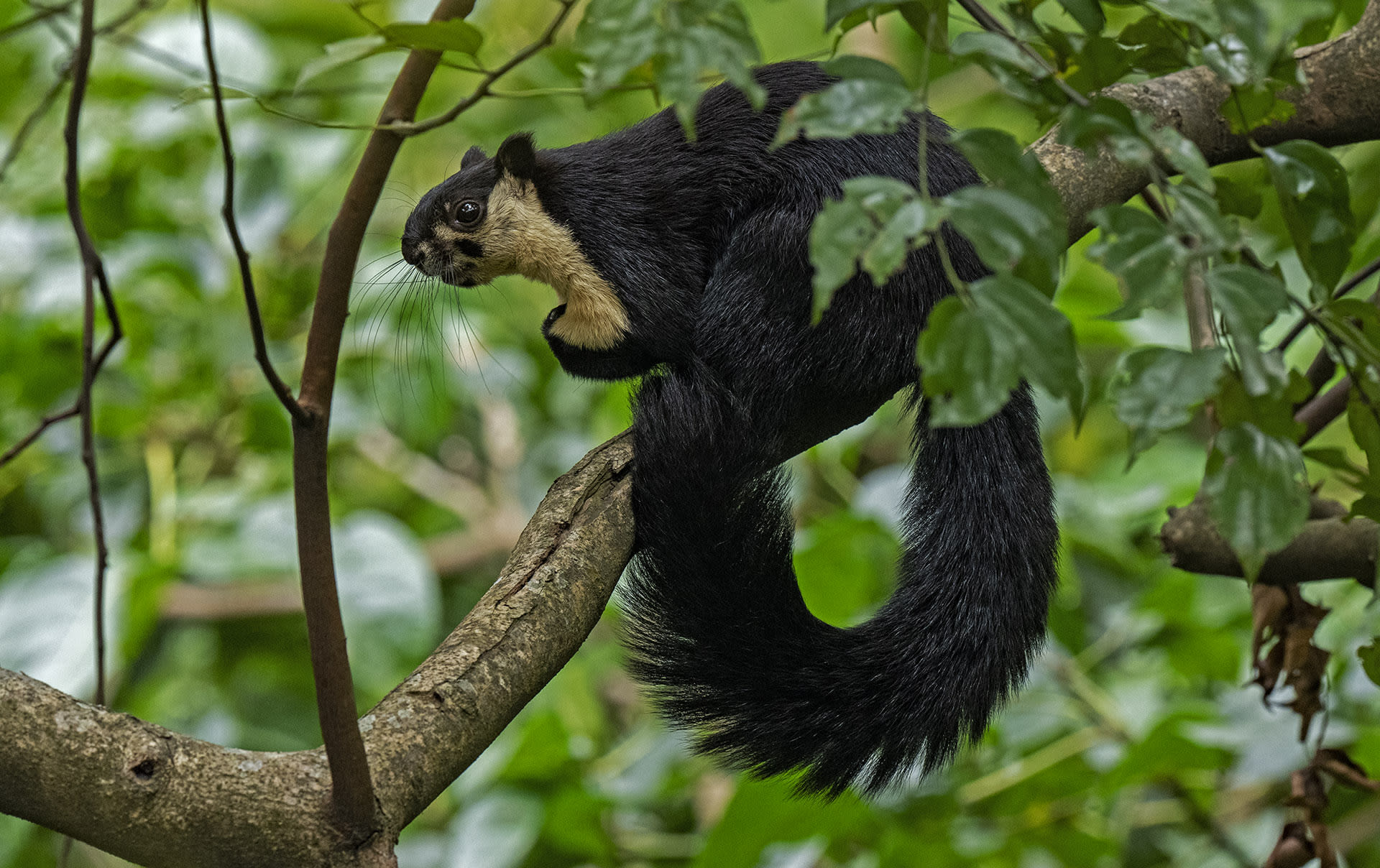 Dipterocarps are the ancients of Namdapha forest. The towering, hardwood trees — some taller than 20-storey buildings — are reservoirs of biodiversity, supporting countless creatures from ferns, mosses, and orchids that cling to bark and branch, to funnel spiders, rare squirrels, and endangered primates. By their muscular roots, fungi sprout and spore, termites build exquisite castles, and layer upon layer of leaf litter gently breaks down to form nutrient-rich forest soil.

Dipterocarps trace their history back millions of years, to the Gondwana supercontinent, and are integral to Asian forests such as Namdapha National Park in Arunachal Pradesh. The protected Namdapha reserve spans 1985 sq km and is part of the Eastern Himalayas Biodiversity Hotspot. It is bounded by the Himalayas in the north, the Patkai Hills in the south, and ranges in altitude from 200 m to 4,571 m.

These variations in altitude create variety of ecosystems, further boosting the diversity that thrives here. Namdapha “harbours some of the northernmost lowland tropical rainforests in the world, and extensive dipterocarp forests,” write authors Dilip Chetri and Parimal Bhattacharjee in a paper on the non-human primates of Namdapha, “accentuated as a high-priority habitat for large carnivore conservation such as tiger.”

Big cats do roam these parts, but spotting a tiger, or a leopard, or a clouded leopard — all of which allegedly inhabit this space — is unlikely due to the thick foliage. “Namdapha is not about big game like tigers and leopards,” says wildlife photographer Dhritiman Mukherjee, who has made numerous trips to the region, and captured all the images in this story. “It is about noticing the smaller creatures, that are equally fascinating. I saw so many birds, and butterflies, squirrels, and primates while trekking. There is always something to see, you just have to keep your eyes open.” 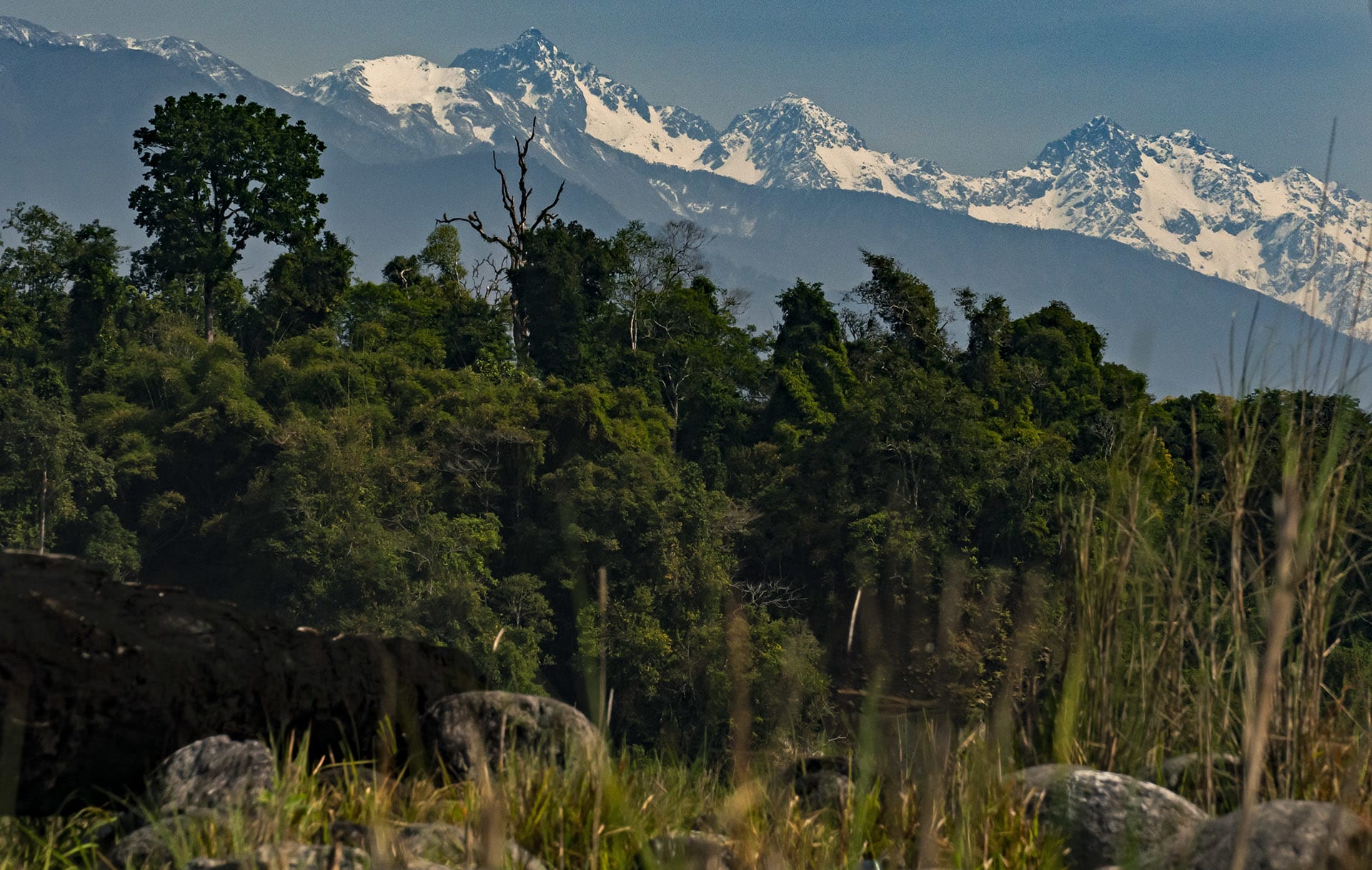 Namdapha can only be explored on foot. Unlike other national parks, the reserve does not have jeep or boat safaris, so expeditions are conducted at a (relatively slow) walking pace, allowing visitors to soak in the majesty of its forests. The soaring trees, akin to cathedrals, are draped with ferns, massive creepers, and epiphytes like orchids, fighting for sunlight and nutrition in this densely populated habitat.

The forest canopy is home to hundreds of arboreal species, such as the masked palm civet (Paguma larvata), a nocturnal creature that uses its long tail to balance amidst branches. “Every evening, I would see this civet in his roosting place in the trees,” says Mukherjee, who spotted it near a guesthouse in the Dibang Valley. “It would sit in the same place, waiting for darkness to fall properly, and then set of for foraging.”

The red giant squirrel (Petaurista petaurista) is another high-canopy dweller that can be seen after dark. These squirrels have a veil-like membrane between their limbs, which they use to glide from higher points in the canopy to lower branches. The photo on the left shows a male climbing up a tree trunk, while a female waits above. “The male kept going up and down, up and down, again and again,” Mukherjee recalls. “It looked to me like he was dancing.”

Red giant squirrels spend their days climbing and gliding through the forest canopy. They feed on largely leaves and berries, and rarely descend to ground level. Occasionally, the squirrels also eat bits of tree bark and sap, as is pictured here.

The orange-bellied squirrel (Dremomys lokriah) on the other hand, forages in the canopy and the forest floor. The IUCN reports that it “has been widely recorded from Bangladesh, Bhutan, India and Nepal in South Asia at elevations of 900 to 3,000 m asl,” though it is uncommon to see this diurnal Himalayan species in the forests of Namdapha. 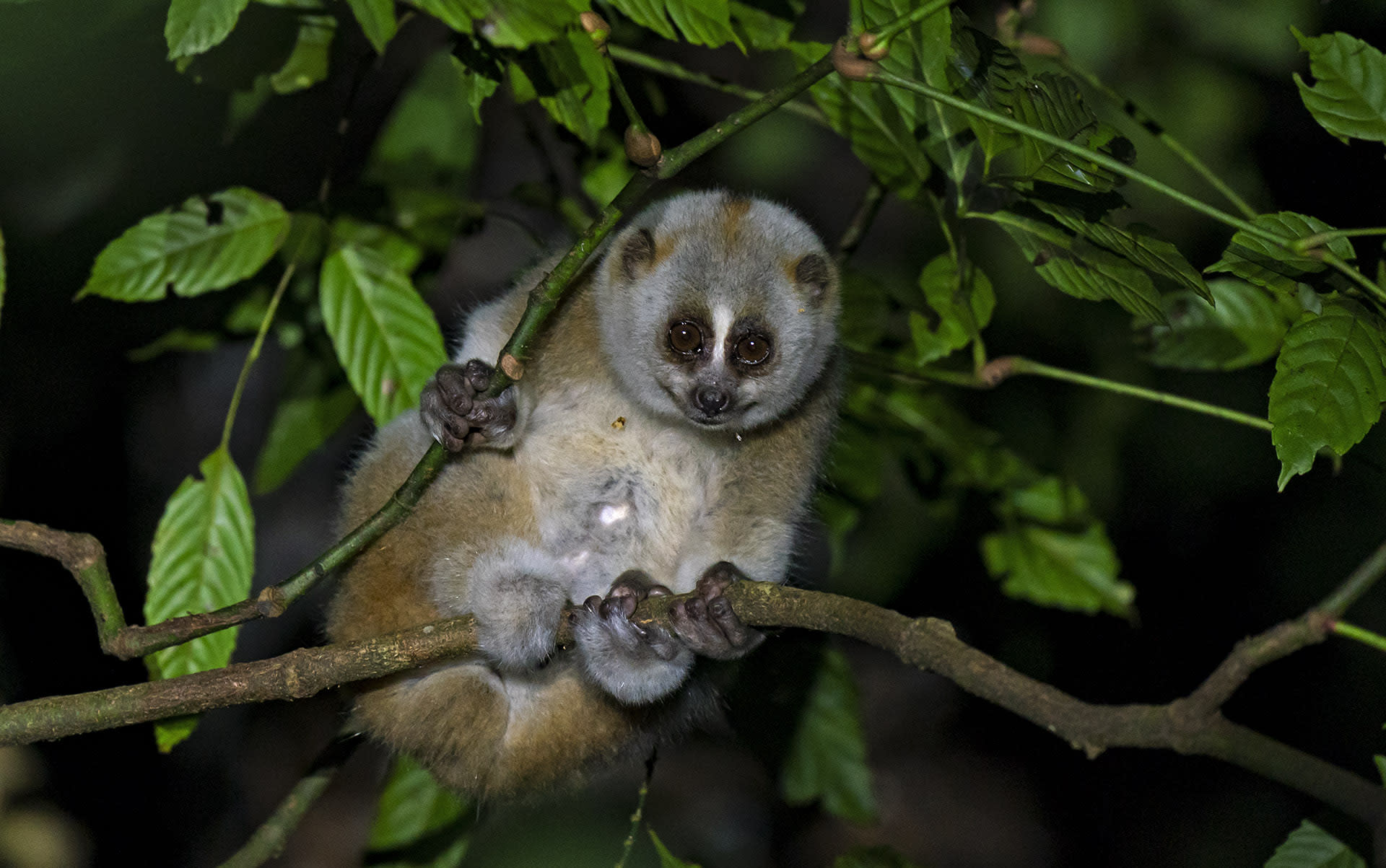 Namdapha supports seven species of primates, from the common rhesus macaque to more threatened populations of the hoolock gibbon (top), slow loris (bottom left), and Assamese macaque (bottom right). Gibbons have arms that are twice the length of their legs, allowing them to cover large distances with a single leap. They move through the canopy with ease, elegance, and energy, but these shy primates have an uncertain future, as more of their beloved forests are being cleared. 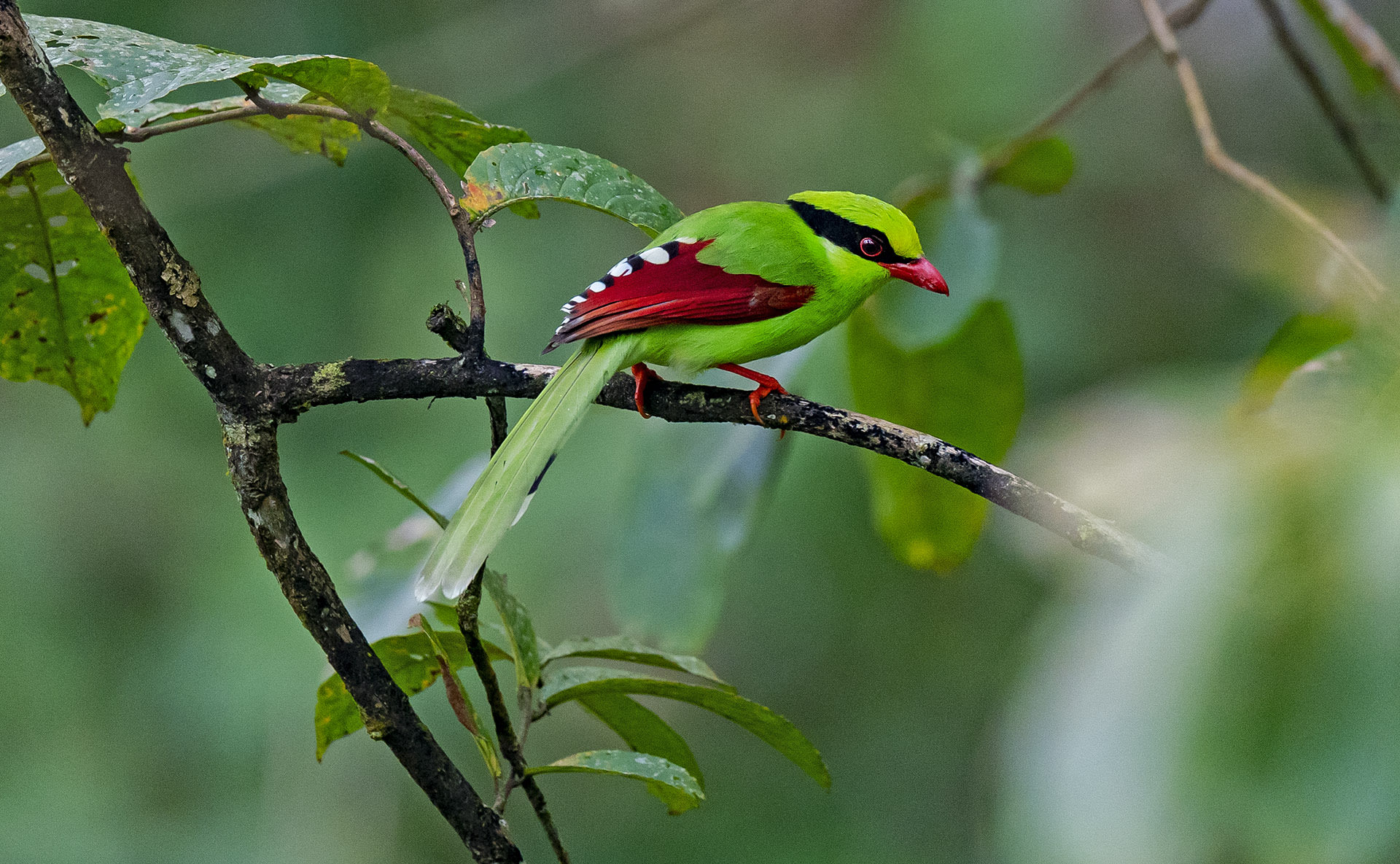 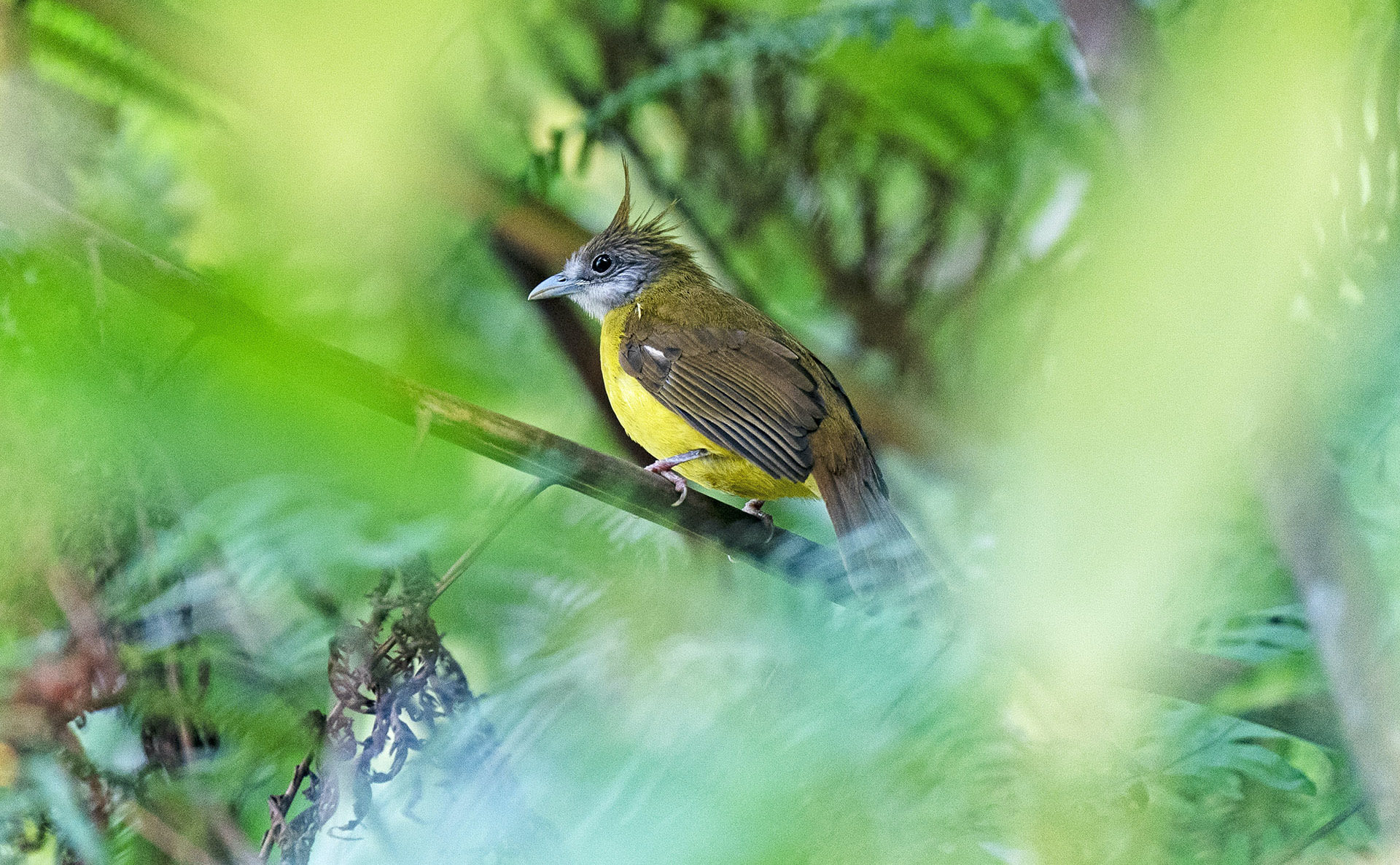 Lower in the canopy, bird call abounds, especially in the mornings when the green magpie (left) and white-throated bulbul (right) are out and about. Green magpies (Cissa chinensis) have vibrant, almost neon plumage, and are actually members of the crow family, while bulbuls (Alophoixus flaveolus) are cousins of the red-vented bulbuls found extensively in the Western Ghats. 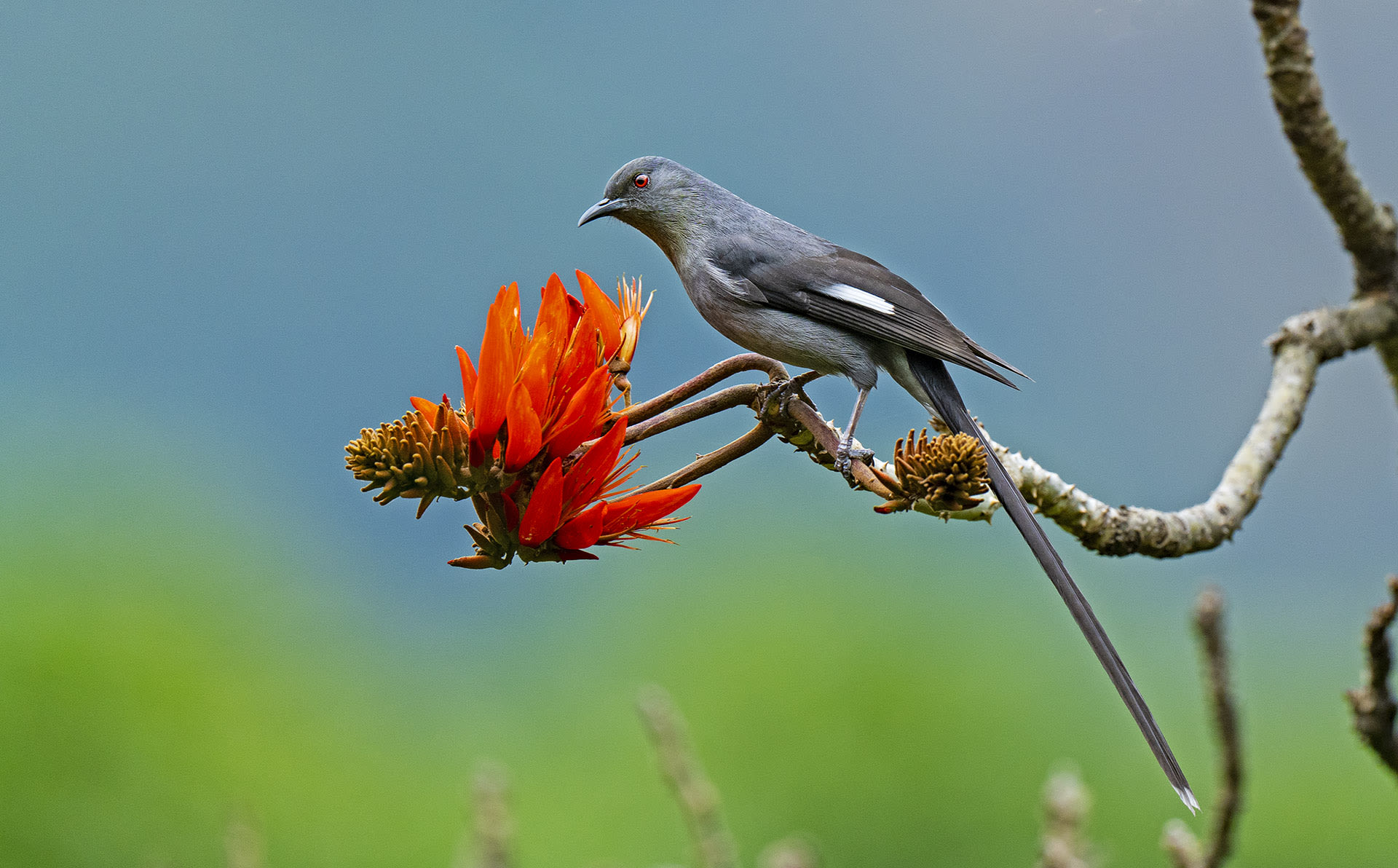 The long-tail sibia (Heterophasia picaoides) is a member of the babbler family of songbirds, found along the Eastern Himalayas. Global populations of the species have dropped in the last few decades, due to hunting by small, tribal communities and habitat loss, due to large-scale clearing of forests in the name of development.

Pied falconets (Microhierax melanoleucos) are another Himalayan species that inhabit the foothills of the mountain range in Arunachal Pradesh. Studies in Namdapha report an endearing courtship ritual, where males present females with leaves, presumably to indicate his commitment to nest-building. During breeding, the birds occupy holes in trees made by barbets and woodpeckers, laid with organic material foraged from the forest. 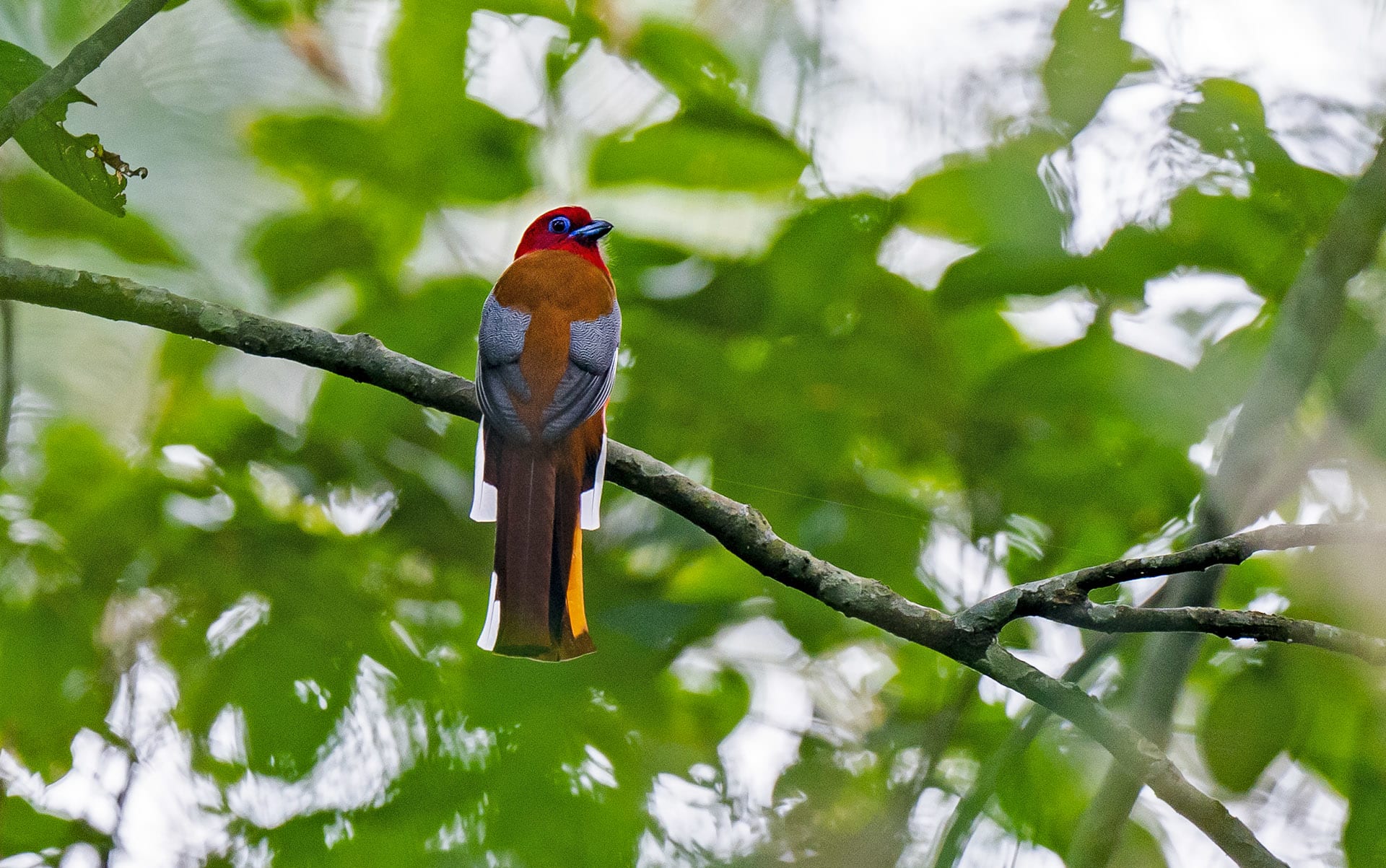 There are thousands of species that inhabit these forests, such as this red-headed trogon, with more being identified every year. In October 2020 for example, a new species of frog was found in the waters of the Namdapha river, and scientists estimate there are still dozens of creatures that remain unidentified. For now, these species thrive, thanks to Namdapha’s isolated location and its legal status as a national park, but we must do all we can to protect this natural heritage. A forest is so much more than a bank of resources; it is wisdom incarnate, a living testament to the wonders and resilience of diversity, and we still have much to learn.