Snippets of a year-long journey to film one of the most attractive and vulnerable pheasants in the world, in the Great Himalayan National Park

Text and photos by: Munmun Dhalaria

Text and photos by: Munmun Dhalaria

During my summer holiday visits to my hometown in Himachal Pradesh, I was mesmerised by the strange illustration of a male pheasant that adorned our wall. It was a western tragopan (Tragopan melanocephalus), Himachal’s state bird — one that very few people have actually seen in the wild.

Each district of Himachal Pradesh seems to have its own name for this colourful bird, lovingly calling it phulgar, jyaazi, or pyaara. Locals near my hometown call it jujurana or the “king of birds” and believe that god created it by collecting the feathers of all other birds in the world. In English too, this bird is referred to by its more descriptive name, black-headed tragopan or the western-horned tragopan (referring to the ‘horns’ that emerge during courtship). This shy, elusive bird is one of five species of tragopans found in the world, and one of two tragopan species found in the western Himalayas, in Himachal Pradesh, Jammu and Kashmir and Pakistan. It is endemic to these high-altitude montane forests and is not only protected in national parks and wildlife sanctuaries, but also found in a special conservation breeding facility at Sarahan in Himachal Pradesh.
Fascinated by this bird, in 2018 I decided to film and document it. An expedition team was born to achieve this seemingly bizarre goal inside the Great Himalayan National Park in Kullu district, Himachal Pradesh.

The expedition team at our campsite. The team included Prashant Negi (top, with extreme right ), an apple farmer and ex-IT professional from Kinnaur, who has dedicated several years to exploring the mountains of his backyard and learning more about endemic birds. An asset to wildlife biologists studying Himalayan birds in the region, he involves himself in citizen science initiatives like eBird. Meeting Negi, a self-declared jujurana enthusiast, was a godsend, especially since his main priority is to bring birding and responsible ecotourism to the Tirthan Valley. Dhuniji (above, and top extreme left), his trusted local accomplice, was our expedition guru and guide, naturalist and expert tracker of animals, ever willing to accommodate my 3 am wake-up calls.

Meghna Bandyopadhyay from the Wildlife Institute of India is seen collecting scat samples. Her guide, Dr K Ramesh, was the first scientist in India to successfully radio-tag a female western tragopan more than two decades ago. A fellow camera-trapping enthusiast who knew the park like the back of her hand, Meghna’s company helped ease my treks on painfully steep mountains and her extensive research inside GHNP kept up my faith in finding this special bird.

The year passed by quickly, from one fleeting jujurana sighting to another. Every day spent in GHNP was a delight. Our days began with hill partridge calls, gorals spooked us on the way to our campsites, and signs of leopards and the Himalayan brown bear kept us energised on our search. My challenge as a filmmaker was compounded by wanting to capture the western tragopan’s behaviour or at least observe it. With so few wildlife biologists working in this part of the country and a deficiency of data, filming this extremely rare habitat specialist was a mammoth task. My refusal to use birdcalls made this task trickier. (Above) Dhuniji and I set up a camera trap. 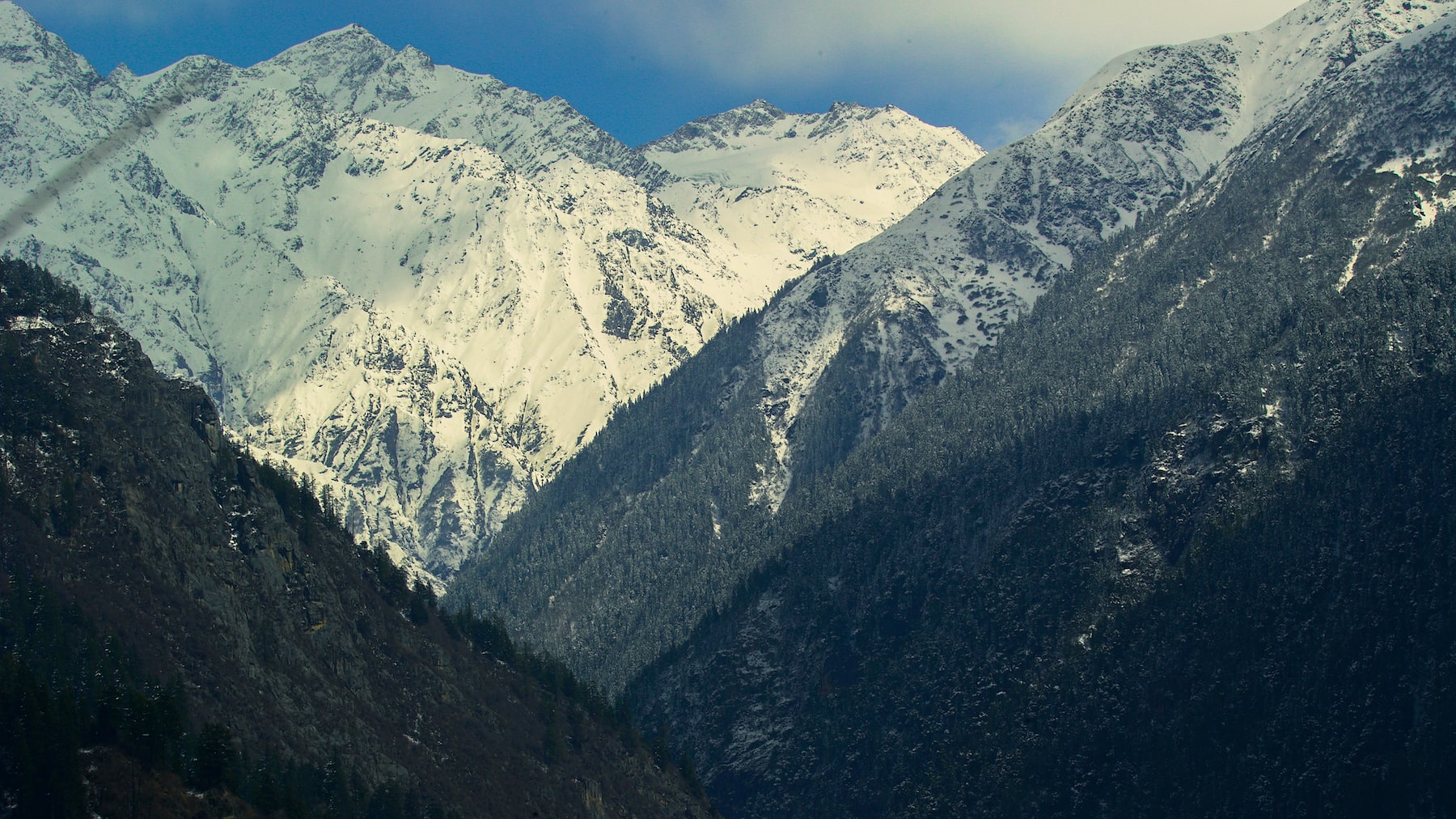 Large parks like GHNP are conserving the last major contiguous populations of not just vulnerable pheasants like cheer pheasant and western tragopan, but also mammals like snow leopards, musk deer, and Himalayan brown bear. Outside this park, survival for these animals seems impossible. 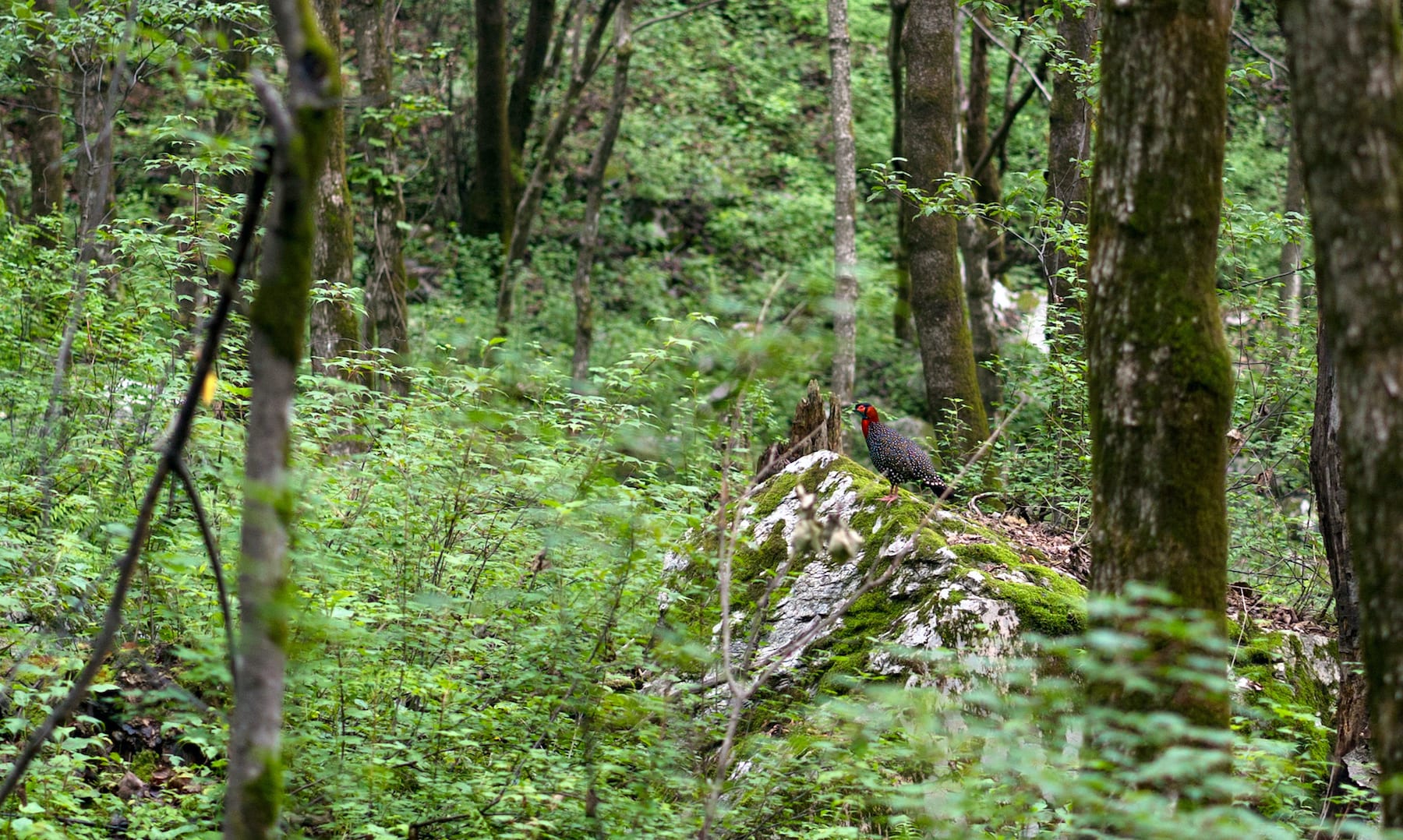 On a rainy morning in June, I woke up from my slug infested tent at 3,000 m above sea level to a sight I may never be able to recreate. The stars had aligned for us that day. A male western tragopan in full breeding plumage appeared in front of my hide and climbed a boulder. He “quacked” to his female, his call drowning all other sounds of the forest. The red faced, blue-wattled, horned male of the species is one of the most beautiful pheasants in the world. I was mesmerised by his courtship stance and the colours on his otherwise gleaming black-and-white body, an evolutionary masterpiece created by the choices made by several generations of mottled brown females. He truly was the king of birds. 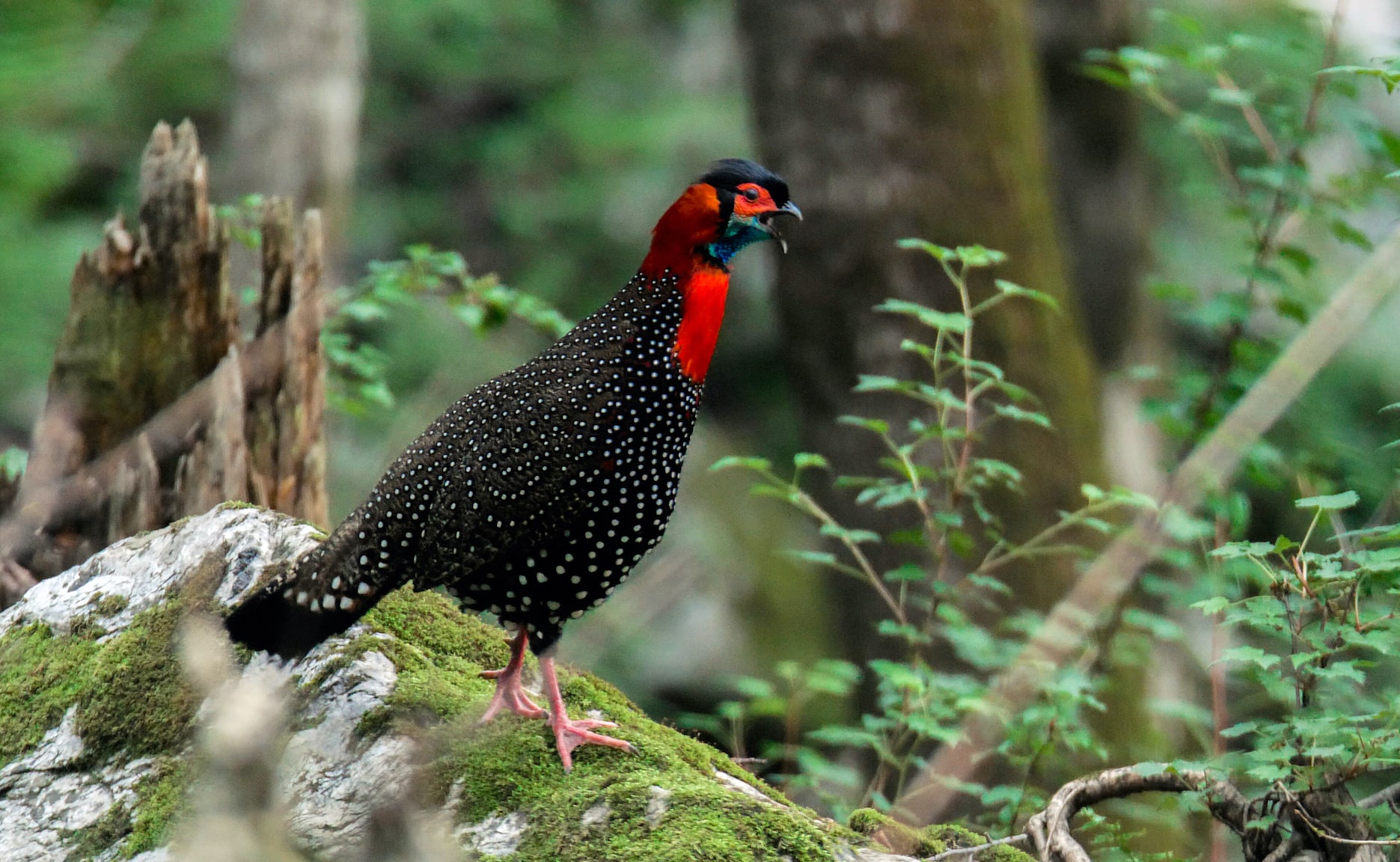 Hunting for plumage, habitat loss, and human disturbances are causing this species to go extinct locally. Around 3,000 western tragopans exist in the wild today. The day I filmed the bird was the day I left GHNP with a heavy heart. It was clear that their beauty and facets of their behaviour make them easy targets for hunters.

Various communities reside in the periphery of GHNP and they too struggle for survival. In the past, the Western tragopan would migrate to lower altitudes in peak winter, and was easy to spot near people’s fields. However, during the year I spent in GHNP, none showed up in the villages. “We used to see them in our fields a few years ago. It’s impossible [to see one] now. A female flew into my terrace a few years ago. But I don’t think you will be able to see this bird [anymore]! ” a farmer said to me. 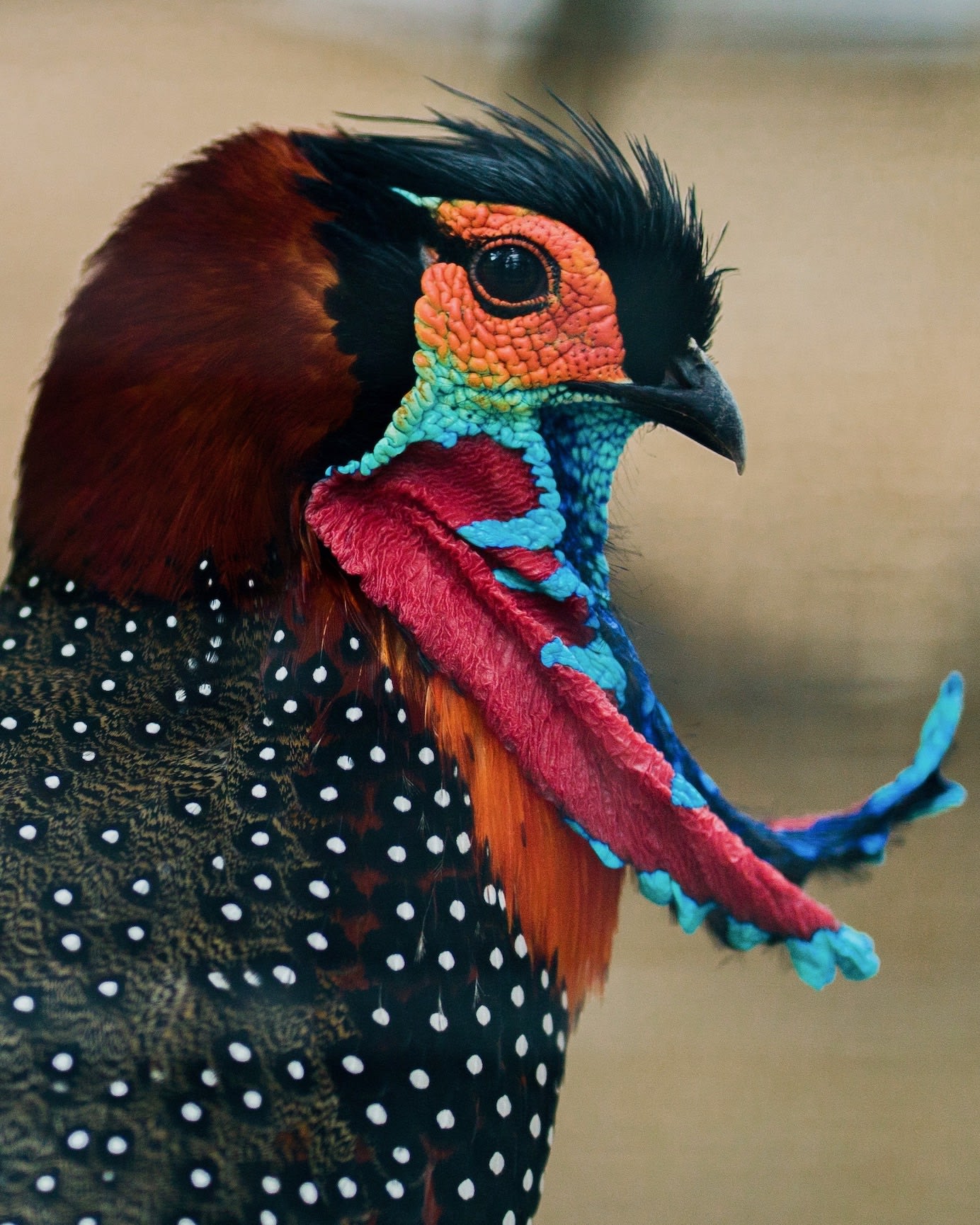 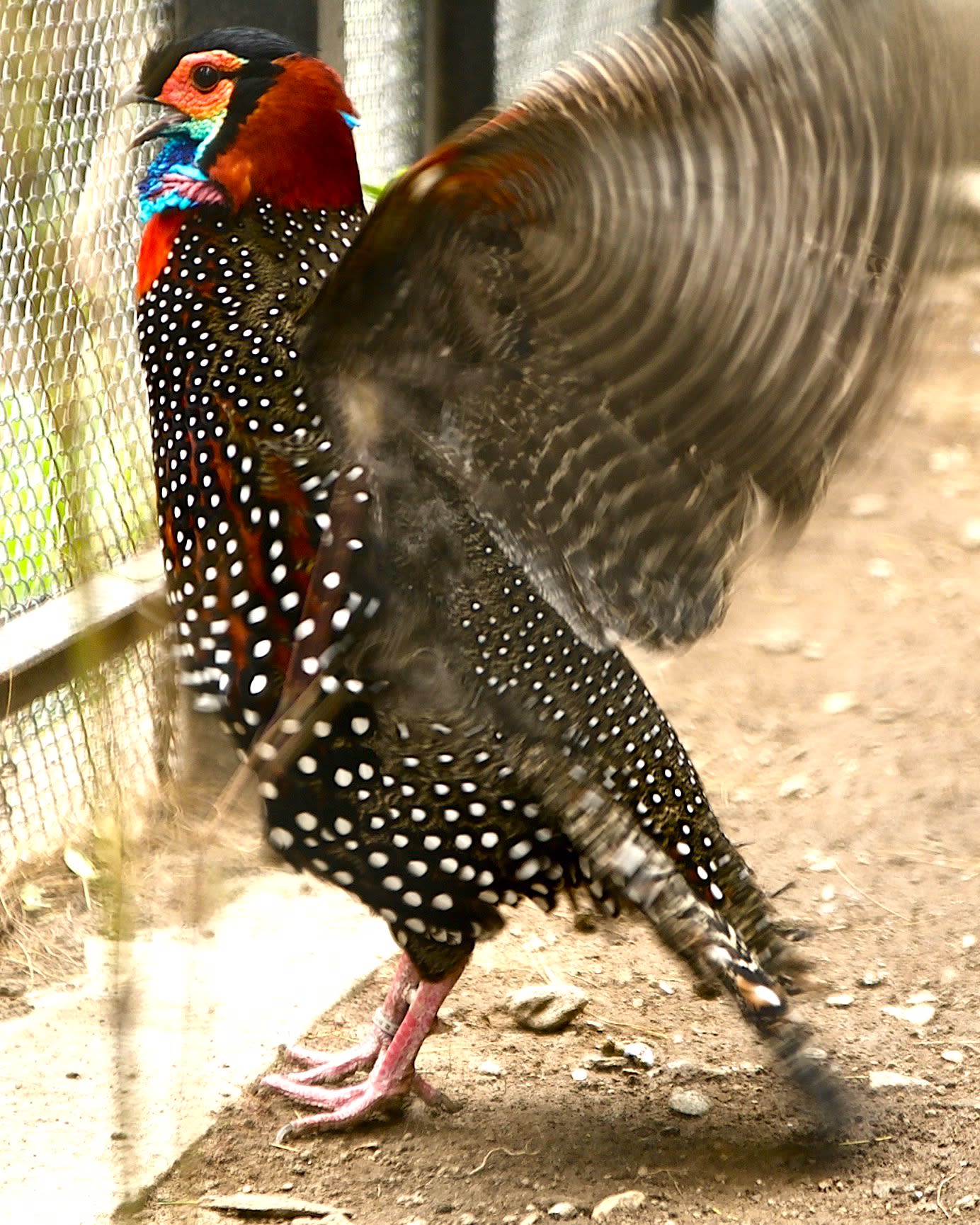 In order to conserve this pheasant, the state of Himachal Pradesh has taken a drastic step by setting up the Sarahan Pheasantry, a captive breeding centre. This is an expensive and time consuming venture, fuelled by the passion of a few local people and a wildlife biologist. This adult male at the centre displays its breeding plumage.

“The captive population is set up as a ‘reserve’ and the long-term goal is to help re-establish or supplement wild populations. It’s also important to understand this bird’s behaviour, through careful controlled observations, to better inform its conservation in the wild,” explains Lakshminarasimha R, the Scientific Officer at the Central Zoo Authority of India. He is the former zoo biologist who brought much needed rigour to the Sarahan Pheasantry, setting up husbandry protocols that will help the birds for years to come. Extremely minimal human interference is allowed in these enclosures, where entry is reserved for caretakers who feed and clean up after them. The western tragopan chicks pictured here were successfully hatched through an artificial incubator. As of 2020, Sarahan Pheasantry proudly houses more than 45 birds.

Roshanlal Dogra has spent the last two decades of his life taking care of these precious birds at Sarahan Pheasantry. The tragopan occupies a niche in the western Himalaya and can disperse seeds that smaller birds cannot. We have an ethical responsibility to make sure such fascinating creatures aren’t wiped out. Lush montane forests aren’t easy to replicate and losing this bird is a threat to our biodiversity. My hope is that a fascination with the jujurana’s beauty and peculiar breeding behaviour can make us want to protect its home. 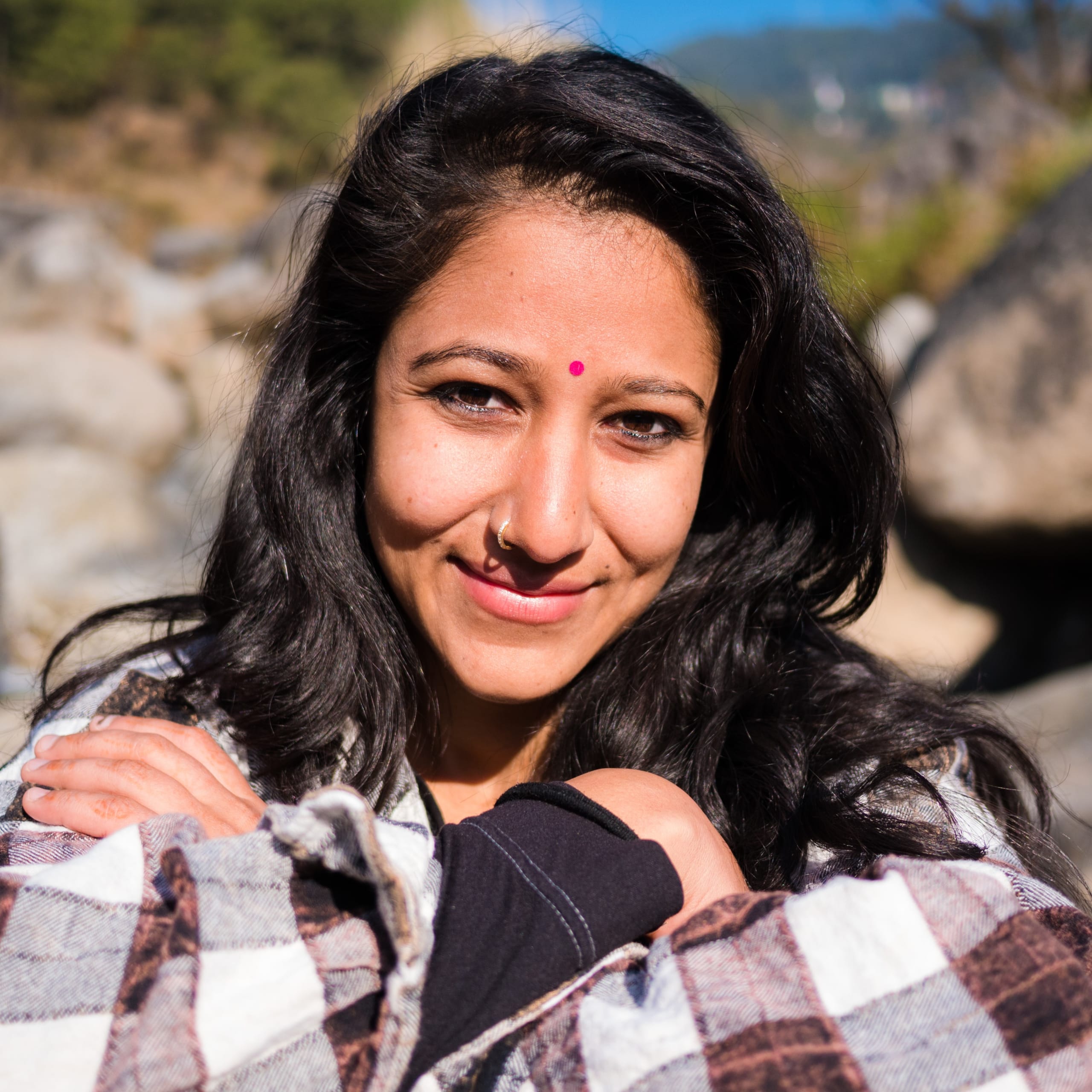