Swift, agile, and fierce, these weasel-like creatures will prey on snakes, birds, and even bee-hives

Yellow-throated martens (Martes flavigula) are the largest members of the marten family. They are also called Himalayan martens, due to their presence across much of the mountain range. In the hilly forests in Uttarakhand, for example, they can be seen scampering up trees, crossing roads, and scrounging around garbage dumps on the outskirts of small towns. “I see them every other day,” says Soumya Prasad, an ecologist who lives in the region and has been studying seed dispersal and garbage disposal in the Western Himalayas. “Yellow-throated martens are experts at raiding nests, very good hunters, and they have this curved away of moving that is amazing to watch.”

Soumya’s colleauge, Raman Kumar, who is a bird ecologist, compares the marten’s elegant movement to a sine wave. He has often observed the marten during his fieldwork, studying the endangered great slaty woodpecker in the sal forests of Uttarakhand. “Once, a yellow-throated marten raided an active nest that we were observing and ate at least two almost-fledged chicks.” The marten’s invasion was a rough break for the study, but such is the nature of scientific study: one can merely observe.

Kumar recalls seeing the martens in pairs, or singles, by the side of the road, while he was driving through forested areas. “They are swift and fluid, very graceful in movement. The yellow fur on the throat and belly is striking when it catches your eye.”

Yellow-throated martens are fierce predators. These weasel-like creatures inhabit forested and semi-forested areas in the foothills and middle Himalayas. They are also found northwest of India from Afghanistan and Pakistan, in numerous parts of China, throughout mainland Southeast Asia, on the islands of Sumatra, Java and Borneo, and in the region from Korea to the Russian far east.

Despite their relative commonality in the upper reaches of India, there is scant research on this feisty little carnivore. Here’s what we do know. 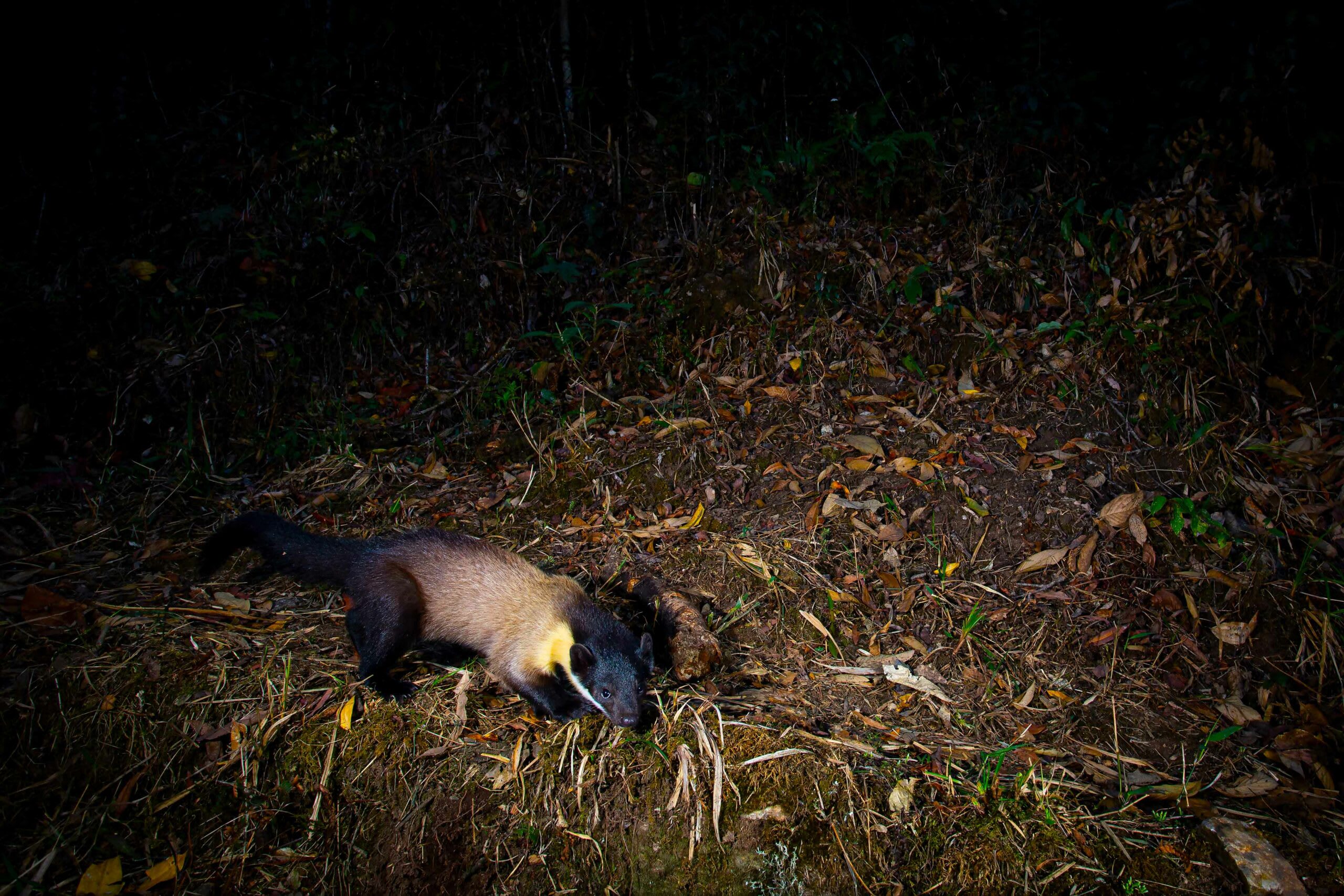 Martens belongs to the Mustelidae family, which also includes carnivores such as weasels and badgers. There are two species of martens in India: the Nilgiri marten, which is endemic to the Western Ghats and the yellow-throated marten, which lives in the Western Himalayas, from Uttarakhand to Arunachal Pradesh. According to the IUCN, they generally live at altitudes ranging from sea level to 4,510 m. Photo: Shivang Mehta Cover photo: Soumabrata Moullick

Wildlife photographer Dhritiman Mukherjee has seen the yellow-throated marten countless times across the Himalayan range. “They are all over Uttarakhand, but I’ve also seen them in Singalila in West Bengal, Eaglenest in Arunachal Pradesh, and in some parts of Himachal too.” This photo was taken in Pangolakha Wildlife Sanctuary in eastern Sikkim. The sanctuary is located at 4,200 m — about the highest altitudes at which the yellow-throated marten is found. “It was wintertime, and this pair was hunting in the snow, looking for something to eat,” Mukherjee says. “Walking through the forest, we would see them at least once a day.” Photo: Dhritiman Mukherjee 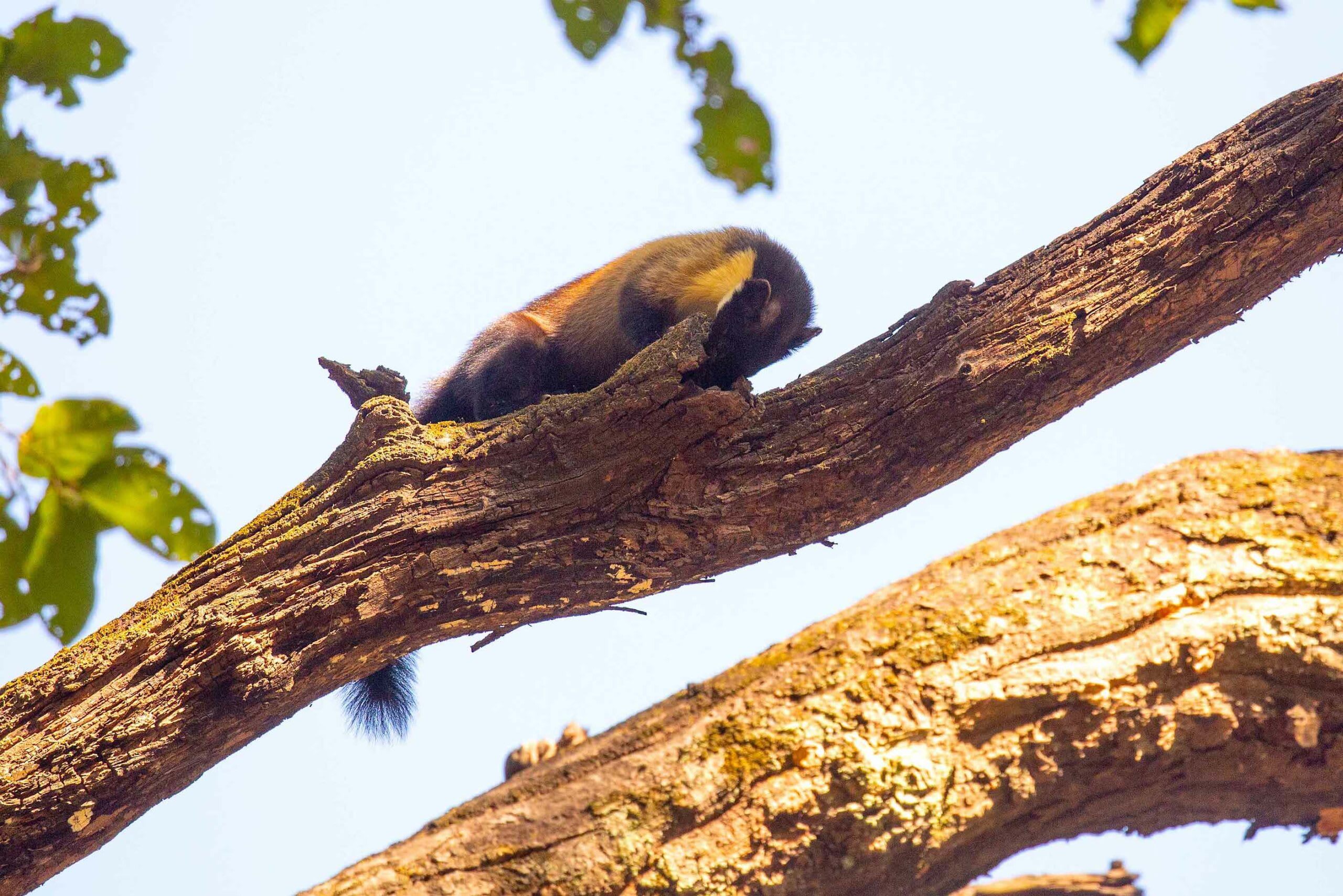 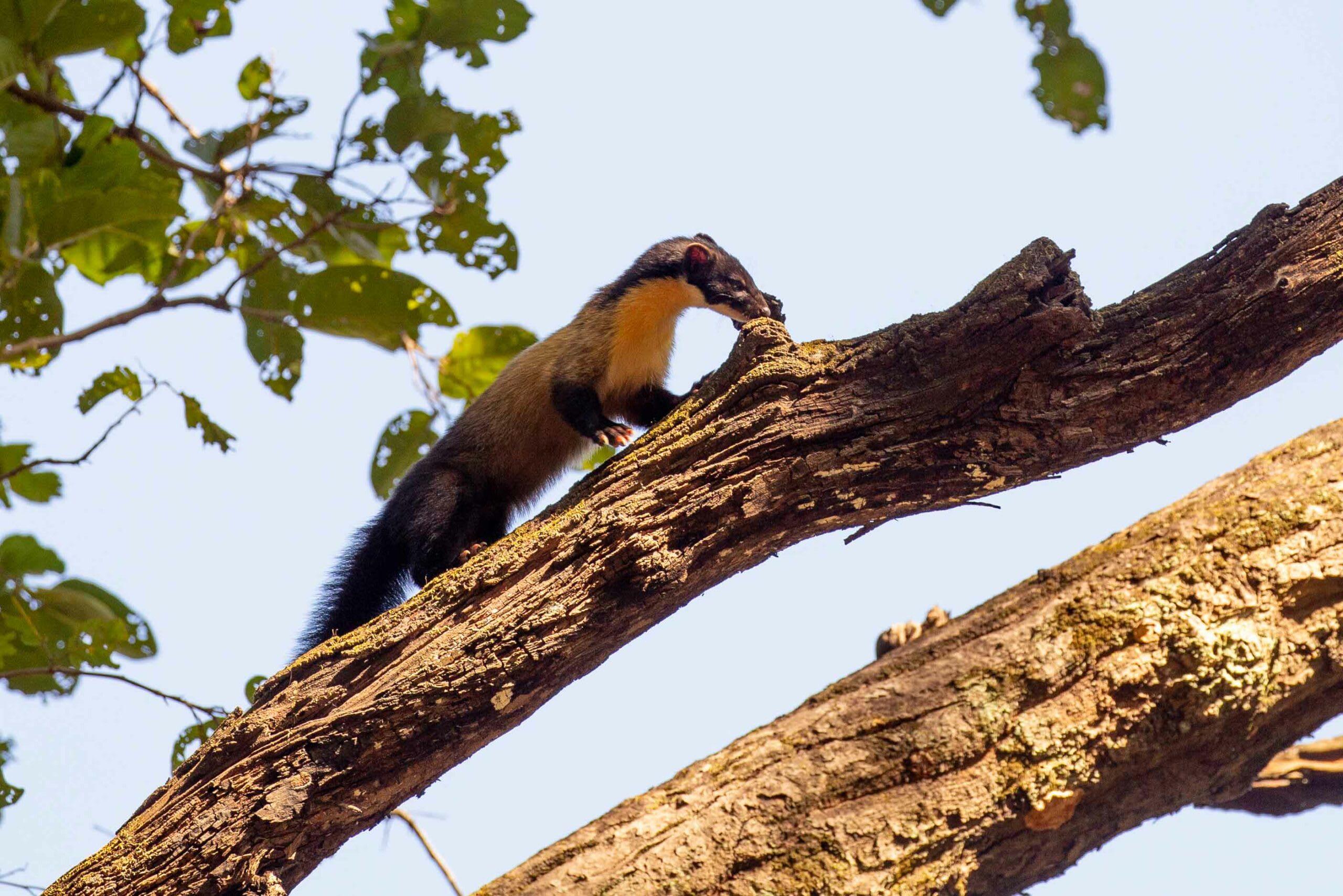 Yellow-throated martens are astute hunters and skilled climbers. They’re known to raid birds’ nests for eggs or fledgelings. They also serve as prey for big cats such as leopards, which might explain their diurnal behaviour. Reports suggest the movement of martens is restricted to the day, except in areas where humans live, where nocturnal movements have been recorded. Photos: Saurabh Sawant 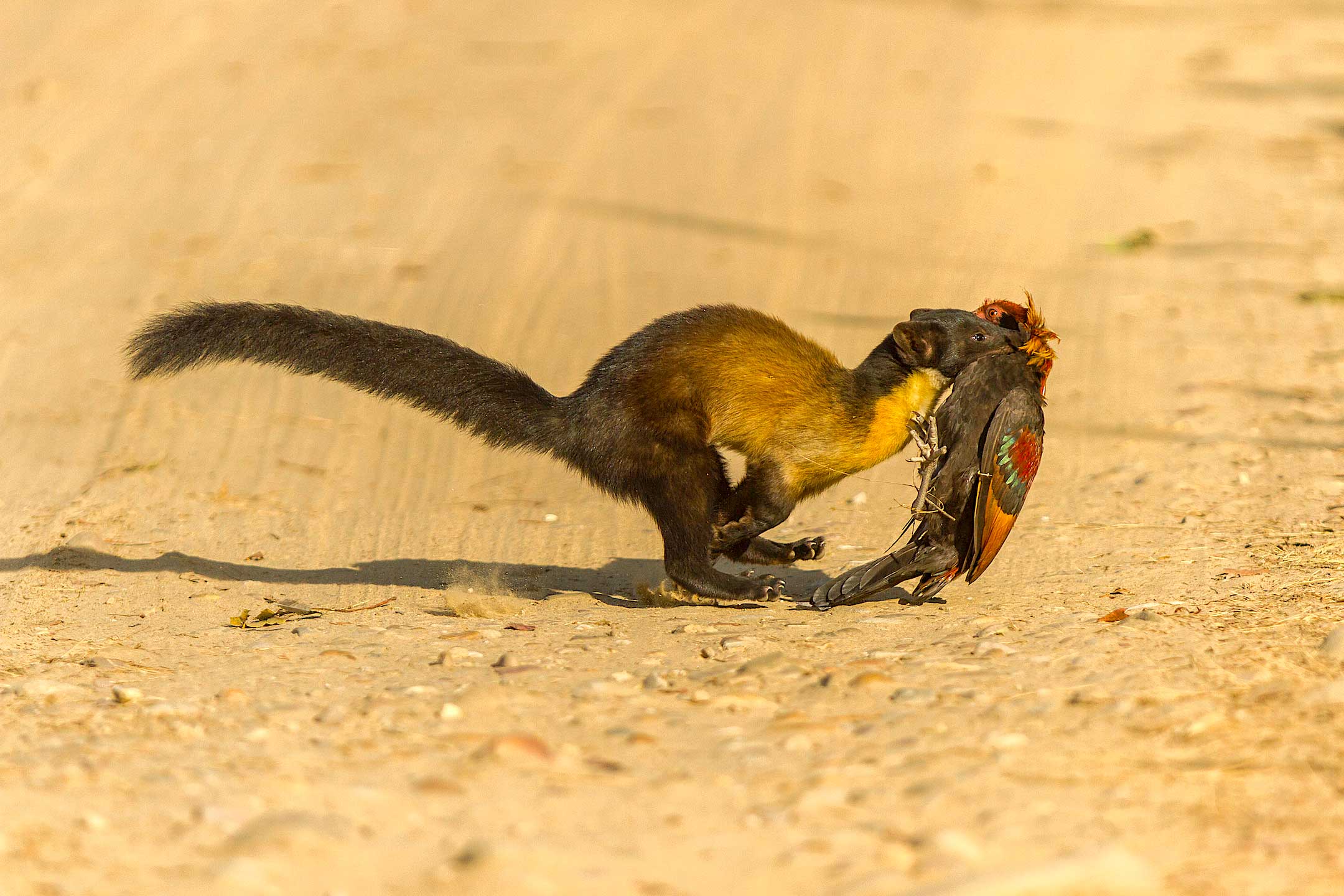 As per the IUCN, the diet of yellow-throated martens includes “squirrels, birds, snakes, and lizards,” although it may also consume insects, eggs, frogs, kitchen waste, fruit, and nectar. There have been some reports of martens attacking prey as large as ungulates and macaques, but these interactions are yet to be studied properly. Photo: Soumyajit Nandy 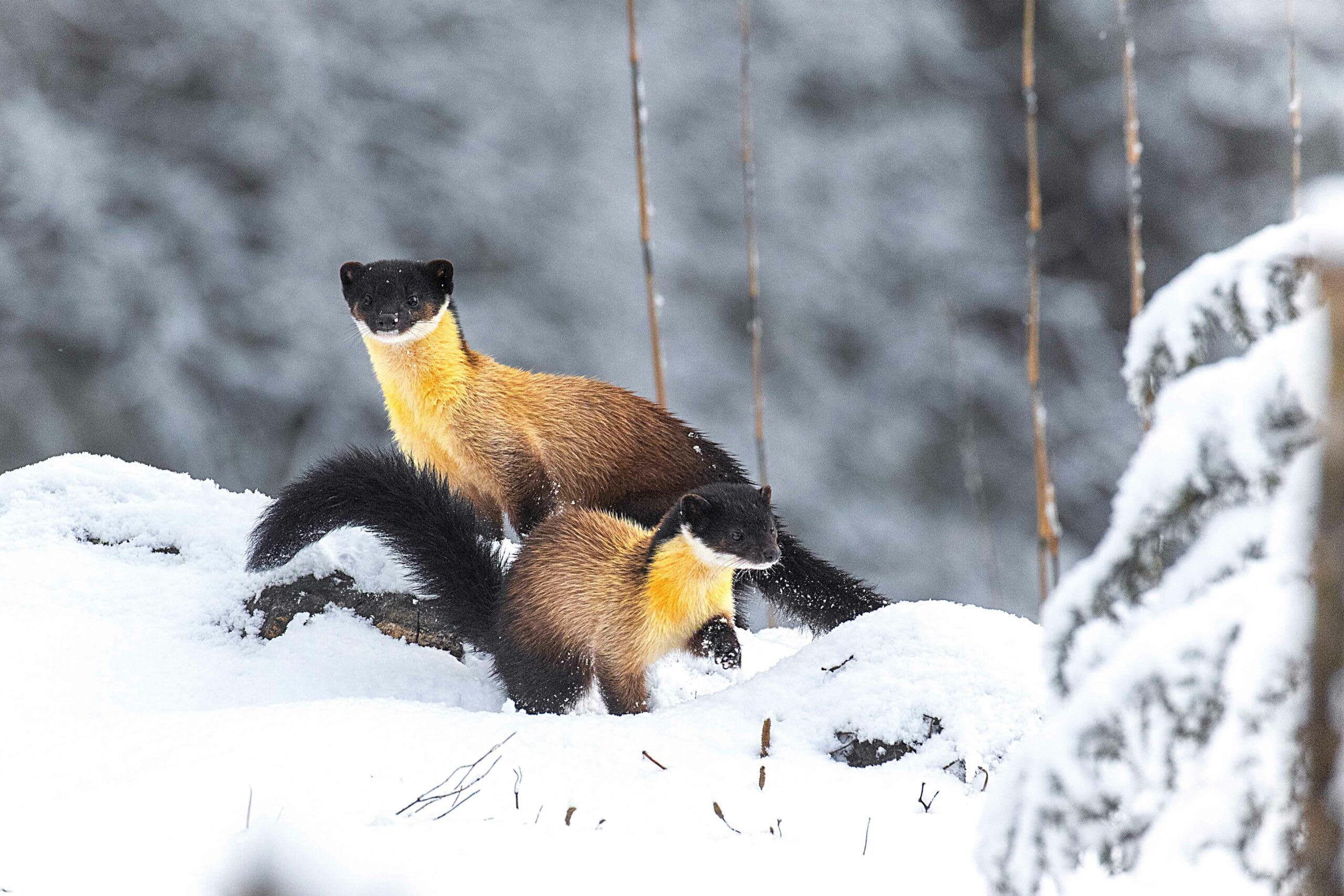 Lonnie Grassman, who studied yellow-throated martens in Thailand’s Phu Khiao Wildlife Sanctuary, remembers seeing “adult pairs, running around the roads together, quite vocal, running in circles.” His study showed that the average range of yellow-throated martens was about seven sq km, though he could not say how many individuals shared a territory. In a phone interview with the biologist, who currently studies wild felids in Texas, he said, martens reminded him of otters, “very curious, very active, very fast.” Photo: Sourav Mondal

In India, martens are regular visitors to garbage dumps in hill towns and villages. “In many of these mountain communities, garbage is thrown down slopes near homes,” says Raman Kumar, “We were doing a small study on garbage close to Nainital — of people dumping stuff on the edge of the forest. There too, the marten was a regular visitor. I’ve also seen them in the higher parts of Mussoorie and Dehradun in the day.” Photo: Dhritiman Mukherjee

Martens are skilled at raiding beehives, which gets them in trouble with human communities. “Bee-keepers have a serious issue with martens,” says Prasad. “They enter hives and eat up the honey, pick up chickens from coops. They are smart creatures, very adaptable, and excellent climbers.” Photo: Saurabh Sawant

This adaptability is among the chief reasons the yellow-throated marten has managed to survive, despite the many changes in its habitat. Its wide-ranging diet coupled with keen predatorial skills fulfils an essential function in the ecosystem; they keep the numbers of smaller animals in check as they spend much of their waking hours hunting. Photo: Soumyajit Nandy