Some fungi, in order to spread their spores, manipulate the behaviour of the invertebrates they infect 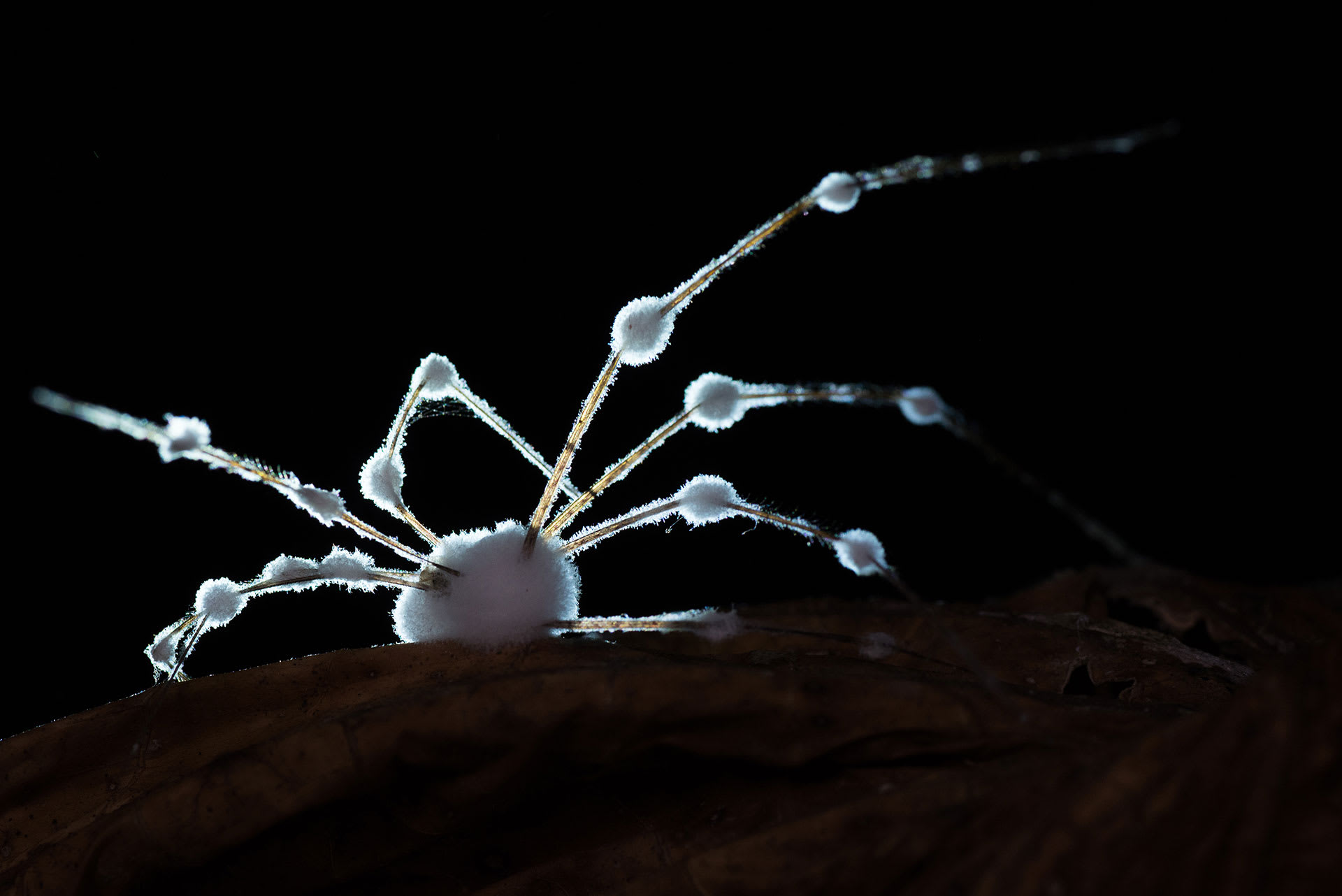 It is the monsoon. The sudden increase in humidity has something stirring that is neither an animal nor a plant. In the moist corners of the woods, little mushrooms are sprouting; they are spore-bearing “fruiting bodies” of fungi that remain hidden as colourless masses (mycelia). Fungi are generally considered to be members of a “third kingdom”, next to animals and plants.

Most fungi are primary decomposers and degraders. Some, called mycorrhizal fungi, lead a symbiotic life with plants, enabling the latter to absorb minerals in return for sugars. Some are pathogenic (disease-causing), infecting living plants and animals. Most of the fungi release spores to disperse and colonise different geographic areas.

On one of her foraging trips, an ant steps onto a fungal spore (called conidium) or breathes one in through her respiratory opening (spiracle). All animals, including us, inhale fungal spores all the time, but the fungal spore picked up by this ant intended to find her. This spore travels through her intercellular spaces and slowly feeds off her tissues. One monsoon day, she clambers upon a leaf as if in a trance. This isn’t her usual behaviour. She drops her head, and her legs barely move. Sometimes, an infected ant like her may bite into the base of a branch or wrap her legs around a branch due to contraction of the muscles in what is called a “death grip”. Through the night, a stalk of pale-white mass erupts from her head-joint, her exoskeleton separates segment-for-segment as the fungal filaments glue her in place.

Pathogenic fungi are common. Most are known to infect plants; there are about 7,000 species that cause plant rust disease alone. Fungi that cause diseases in animals are also diverse; over 1,000 species are known. Some cause diseases in humans as well. All it takes is a spore entering the body. For instance, the fungus that entered the ant’s body and turned her into a walking zombie is a type of fungus called entomopathogenic fungi.

There are at least two groups of distantly related fungi that infect invertebrates. Biologists are just beginning to understand how fungi manipulate host behaviour. Indeed, the dramatic change we observed in the ant we followed was caused by this fungus. Once the time for spore-formation comes, it uses a chemical signal that makes the host seek out open areas where the chances of the spores spreading through the air are promising. 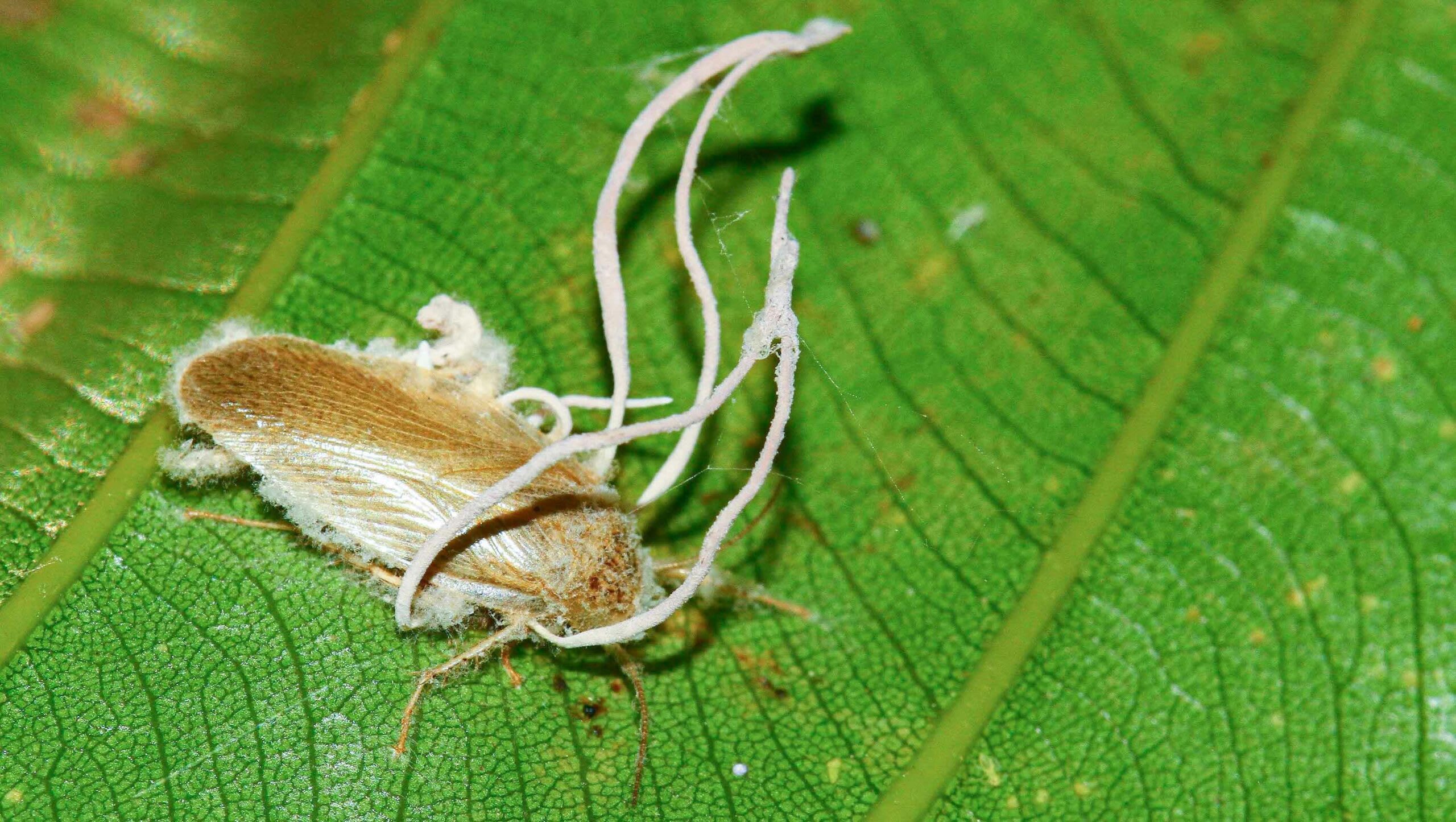 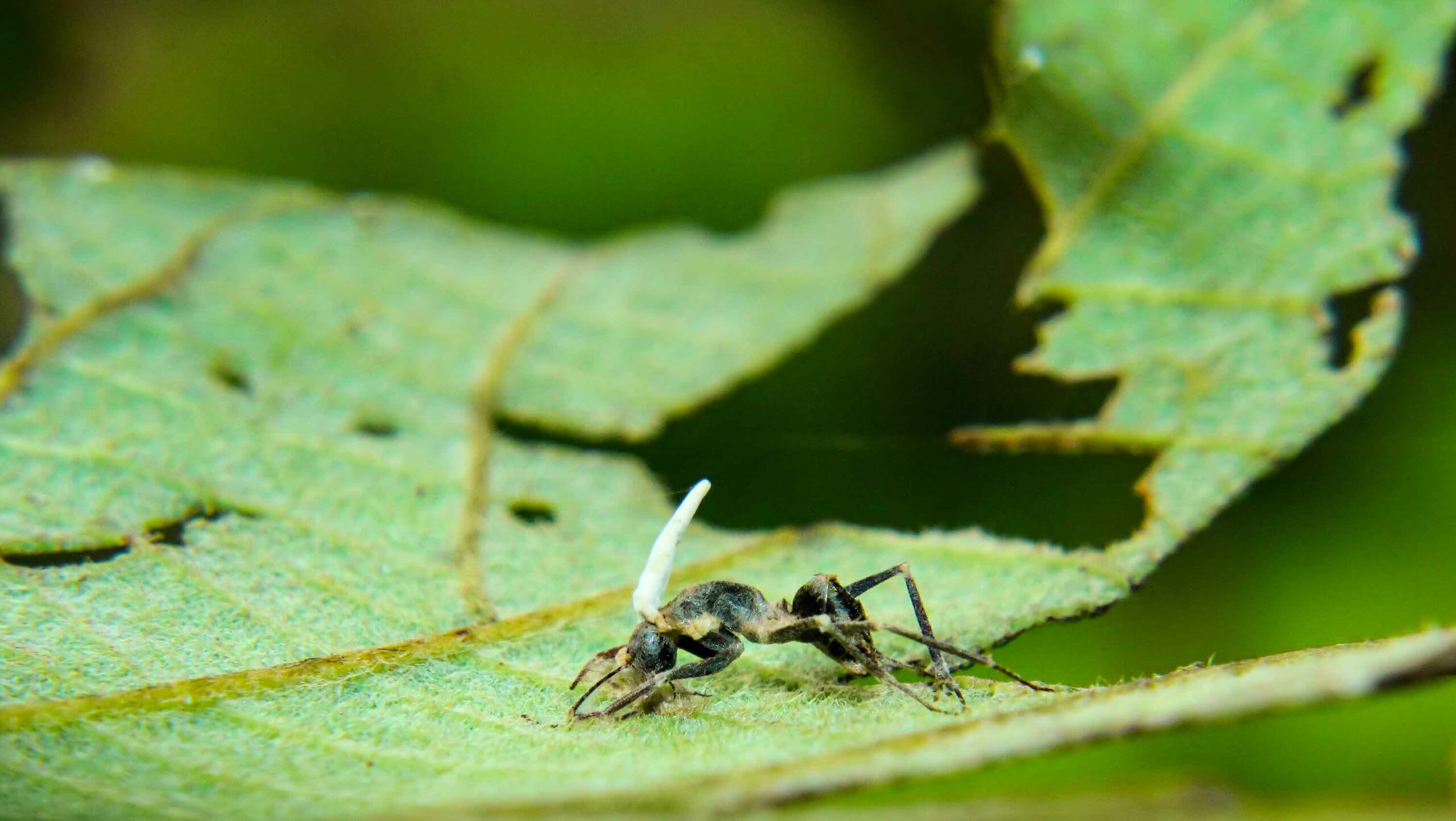 (Top left) Cordyceps fungi growing on a forest cockroach. (Top right) A cordyceps erupting its spore-bearing “horn” from the head-joint of a Camponotus ant. (Above) The sparkler fungus is a pathogenic Ascomycota fungus; this one has infected a Hemipteran bug. The spores of these fungi need to enter orally to infect the host. Photos: Jaisal Singh Bhati (top left and above), Aniruddha Dhamorikar (top right) Cover photo: Daddy long legs spider infected by cordyceps fungus. The fungus has covered the body of the dead spider. The whitish fur-like structures are the fruiting bodies of the fungi. Photo: Ripan Biswas.

The antler fungus (Xylaria sp.) is saprophytic (i.e. it lives on decaying/dead matter). The white powdery dust is the spores. Fungi largely rely on the air for spore dispersal. Insects also transport spores in the same way that birds disperse seeds. Like seeds, spores germinate after landing in their preferred habitat. Photo: Jaisal Singh Bhati 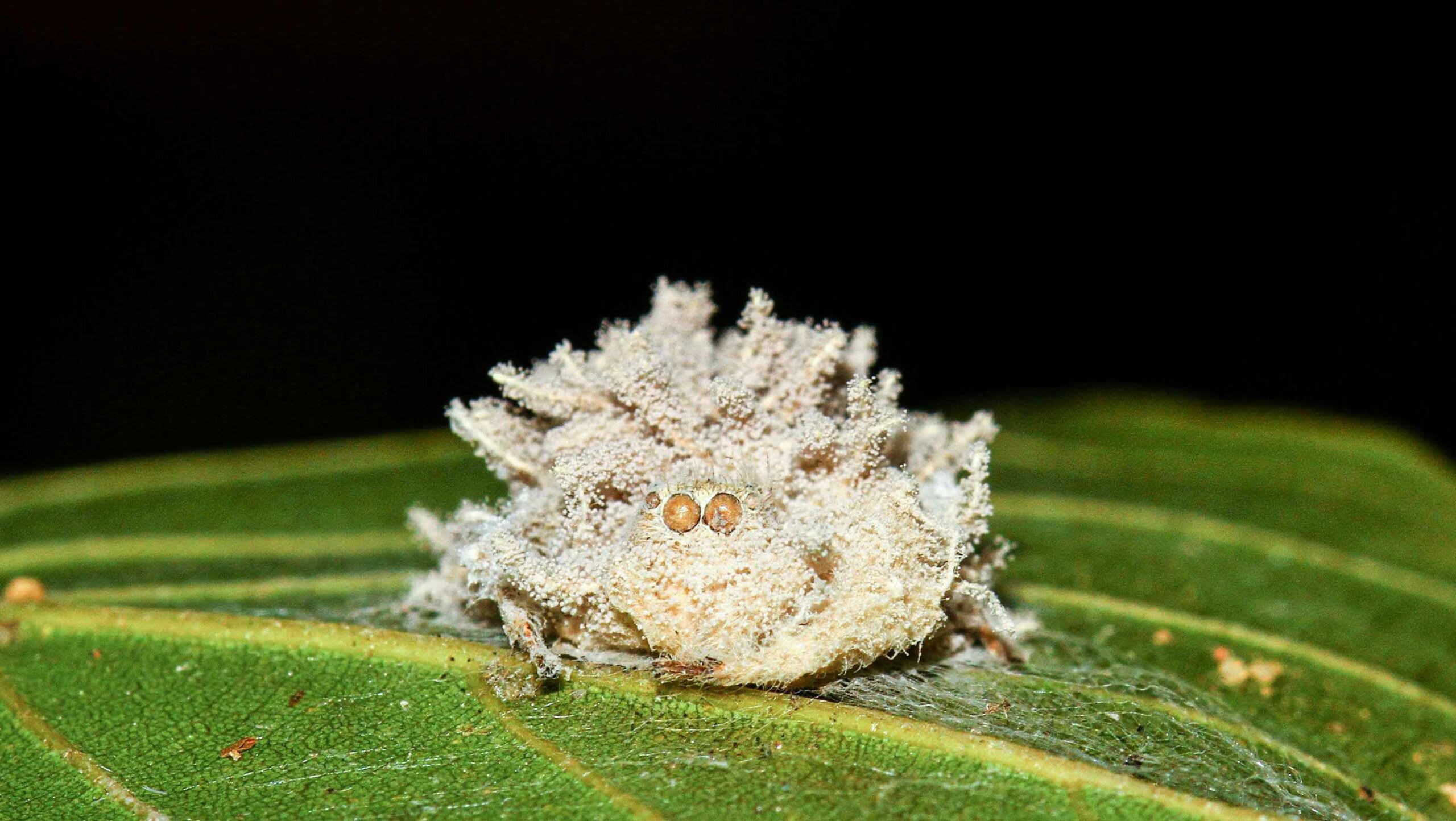 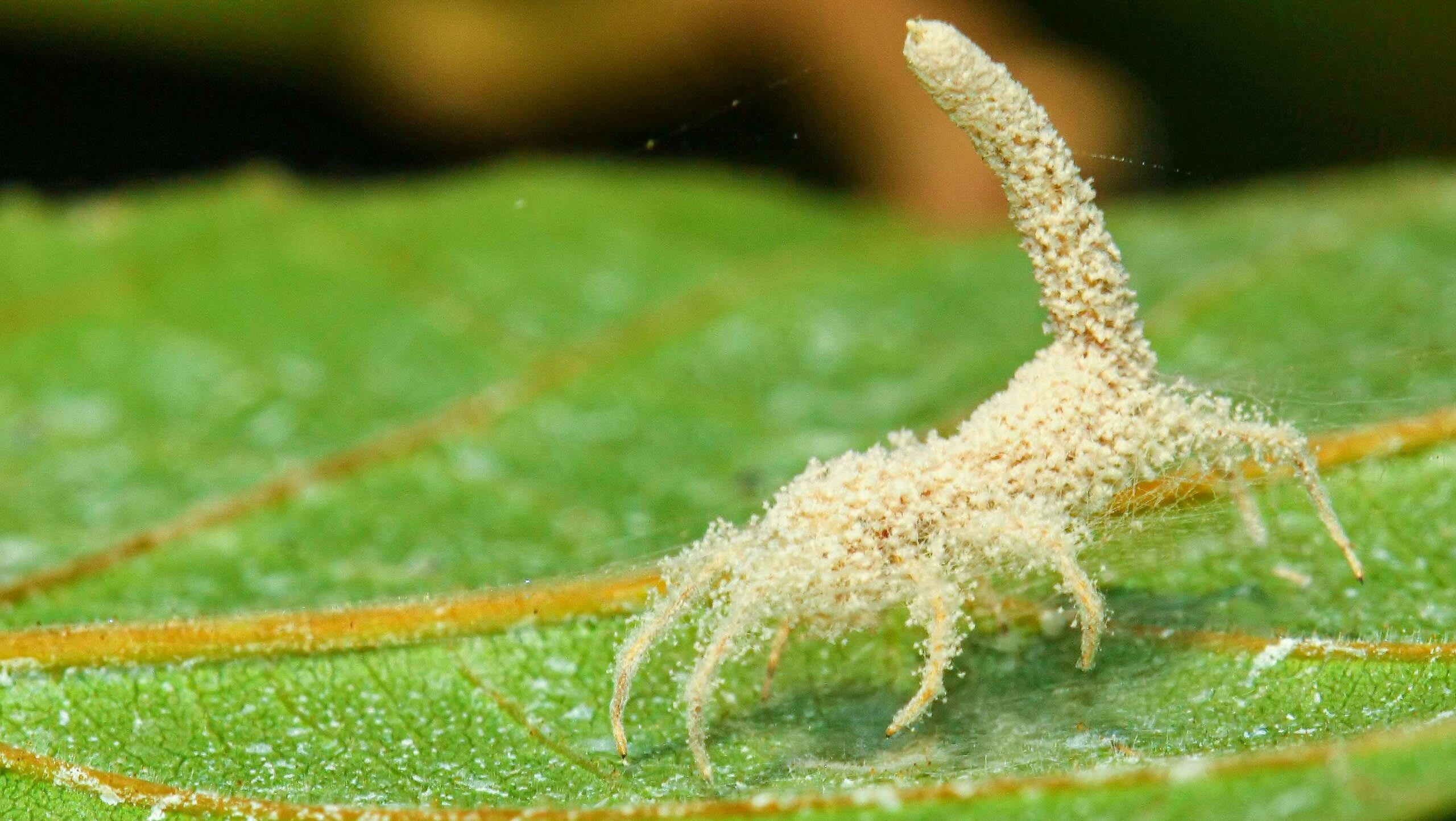 The fungi that affect spiders do not usually adversely affect spiders’ behaviour. Spiders are mostly found clinging to walls, on the underside of leaves, or hanging from their webs, even as many spore-bearing stalks burst out of every pore of their relatively soft bodies. A jumping spider (left) is mummified by Torrubiella sp., a cordyceps fungus. Another unidentified spider (right) display the “tail” of a cordyceps fungus species. Photos: Jaisal Singh Bhati 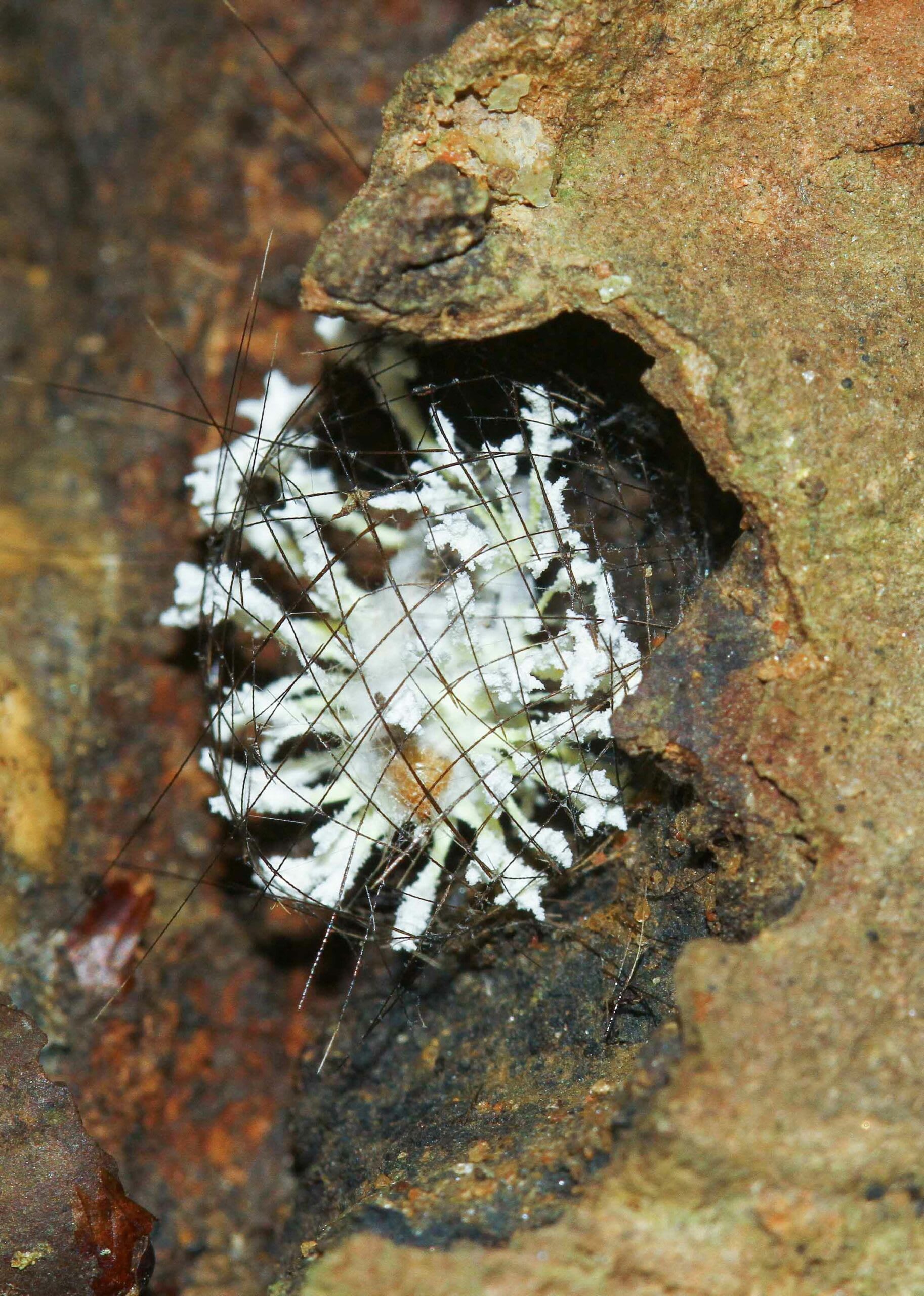 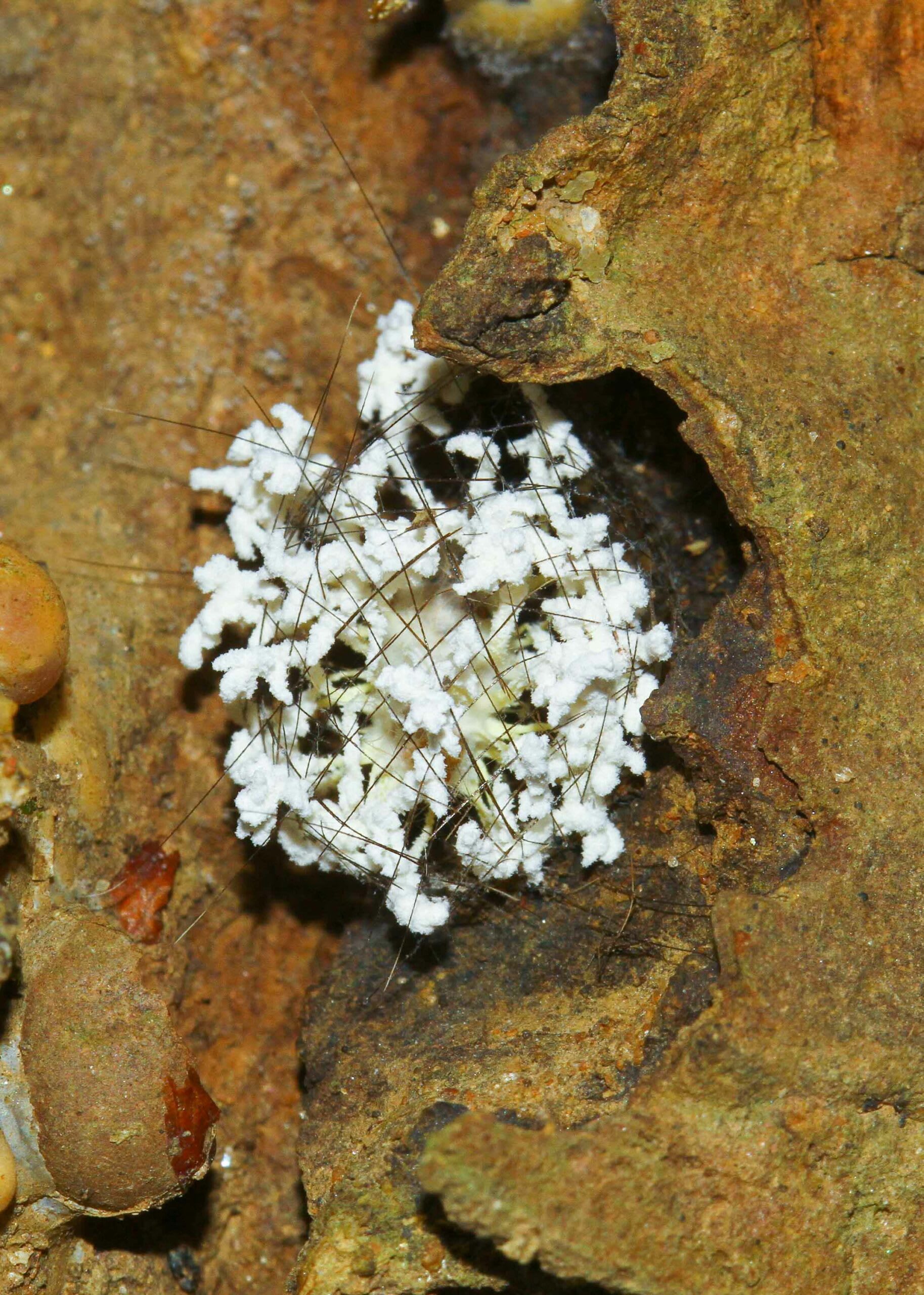 Fungi infect pupas as well. (Top right and top left) Entomopathogenic fungi on the pupa of moths (Cyana sp. of the family Erebidae), and the caterpillars are known to form a “cage” of its own prickly hair around it to protect itself from predators. (Above) The fungus enters the caterpillar’s body and sprouts in the pupal stage. Here, the pupa of a pierid butterfly is affected by the sparkler fungus. All adult zombie flying insects are usually found clinging to tree trunks. As for burrowing insects such as crickets, the fungus (biochemically) coaxes them to venture out onto the surface so that the fungal spores can spread through the air. Photos: Jaisal Singh Bhati 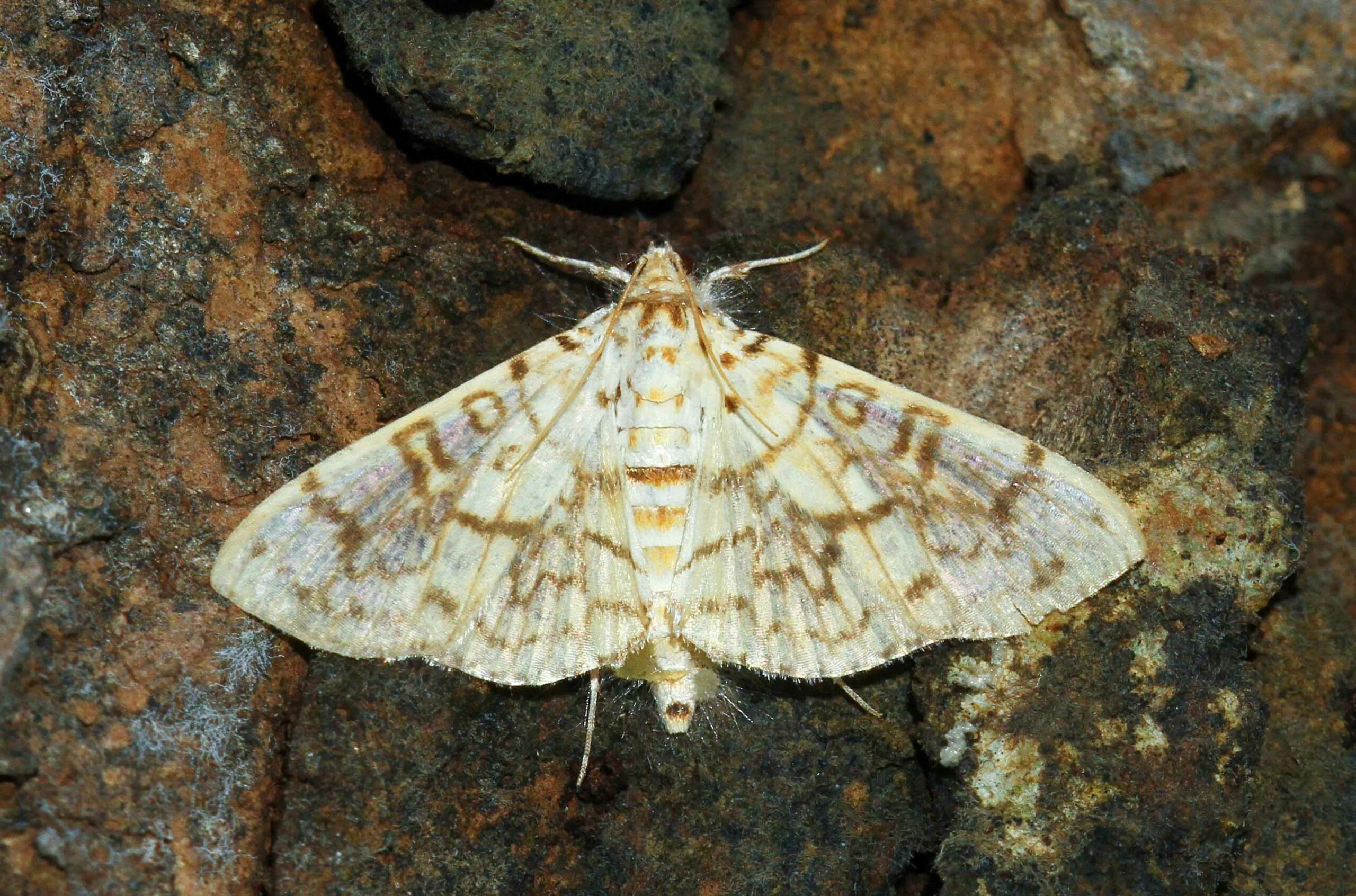 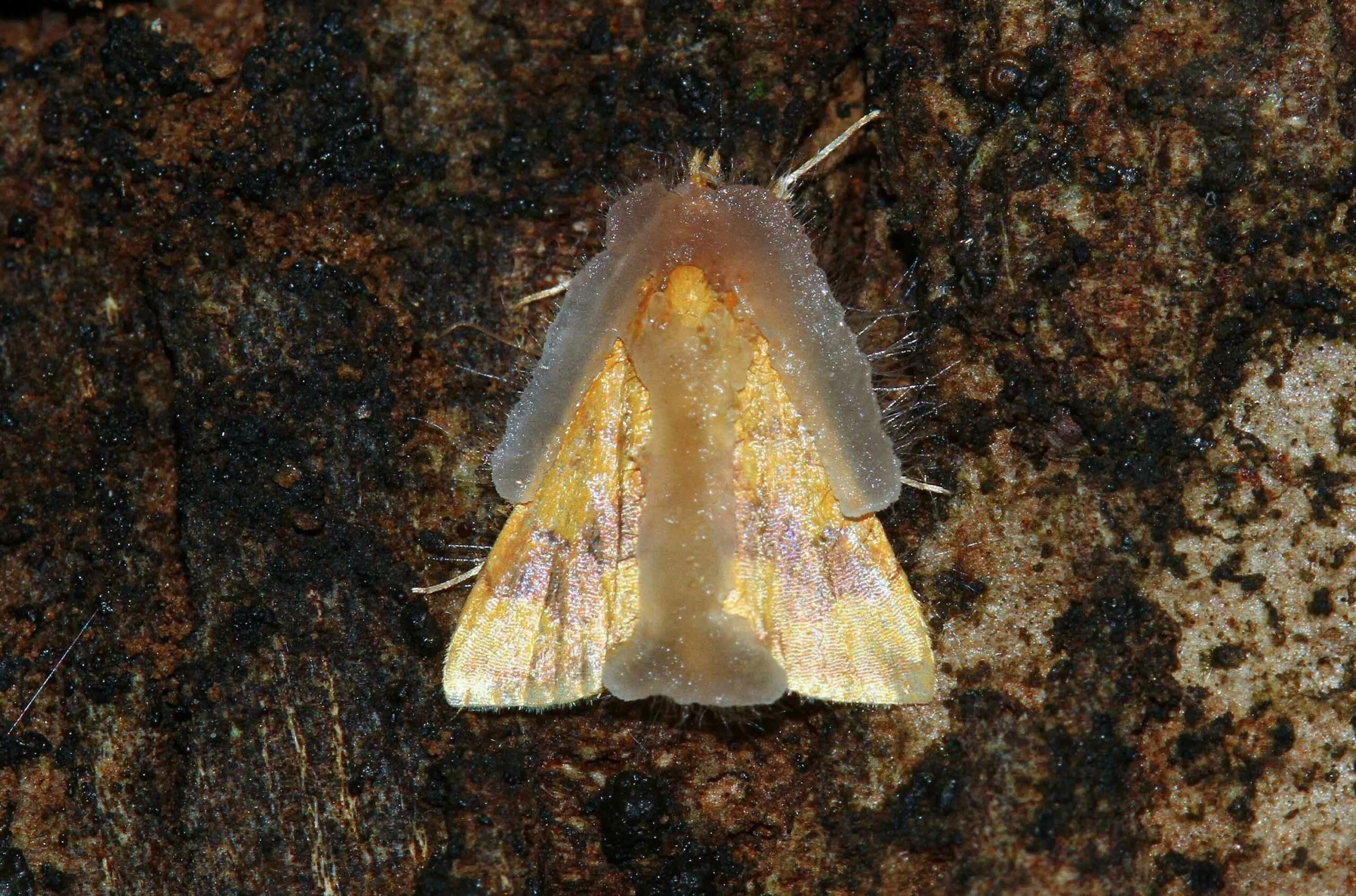 Infected insects are usually found in an exposed area of the forest, unlike when there is natural death after which they are attacked by saprophytic fungi and mould. (Top) A cotton leaf roller moth (Haritalodes derogata) in the early stages of fungal growth. (Top right) The perilla leaf moth (Pyrausta phoenicealis) showing a gelatinous fungus with branching filaments (hyphae), and (above) the banded pearl moth (Sameodes cancellalis) in an advanced stage of fungal takeover showing powdery spores. Photos: Jaisal Singh Bhati

Ophiocordyceps sinensis is among the most famous of entomopathogenic fungi. In the upper reaches of the Himalaya, this fungus targets caterpillars of ghost moths (Hepialid moths), that feed on the roots of the sparse vegetation. The spores of the fungus enter the host caterpillar’s body. Towards the end of its life, the caterpillar changes its position so that its head faces the surface as it is overwhelmed by the fungus. Come summer, it sprouts a fruiting body from the head which emerges to the surface. This particular threatened fungus is sought after by local mushroom foragers, as they earn as much as Rs 150 per piece according to one report by the BBC. This fungus is traditionally used as a cure for various ailments, particularly believed to increase virility. The trade in Cordyceps fungi was an important factor in Nepal’s decade-long civil war, as both sides sough to gain control of the lucrative trade in it. Photo: khlongwangchao/Shutterstock

Fungi are known to degrade and decompose organic matter. Pathogenic fungi also play an important role in population control of insects. Just as insects developed immunity to fight off these pathogens, the fungi have also evolved innovative ways to propagate and infect them. In this image a fungus has taken over an Olios sp. spider. Due to human-induced climate change and habitat degradation, some pathogenic fungi have tipped the scale of ecological equilibrium. The most infamous of these in the wild are Chytrid fungi that have crashed amphibian populations and the fungus causing white-nose syndrome in bats in North America. We are only beginning to observe the imbalances between parasites and their hosts brought forth by climate change. Photo: Jithesh Pai 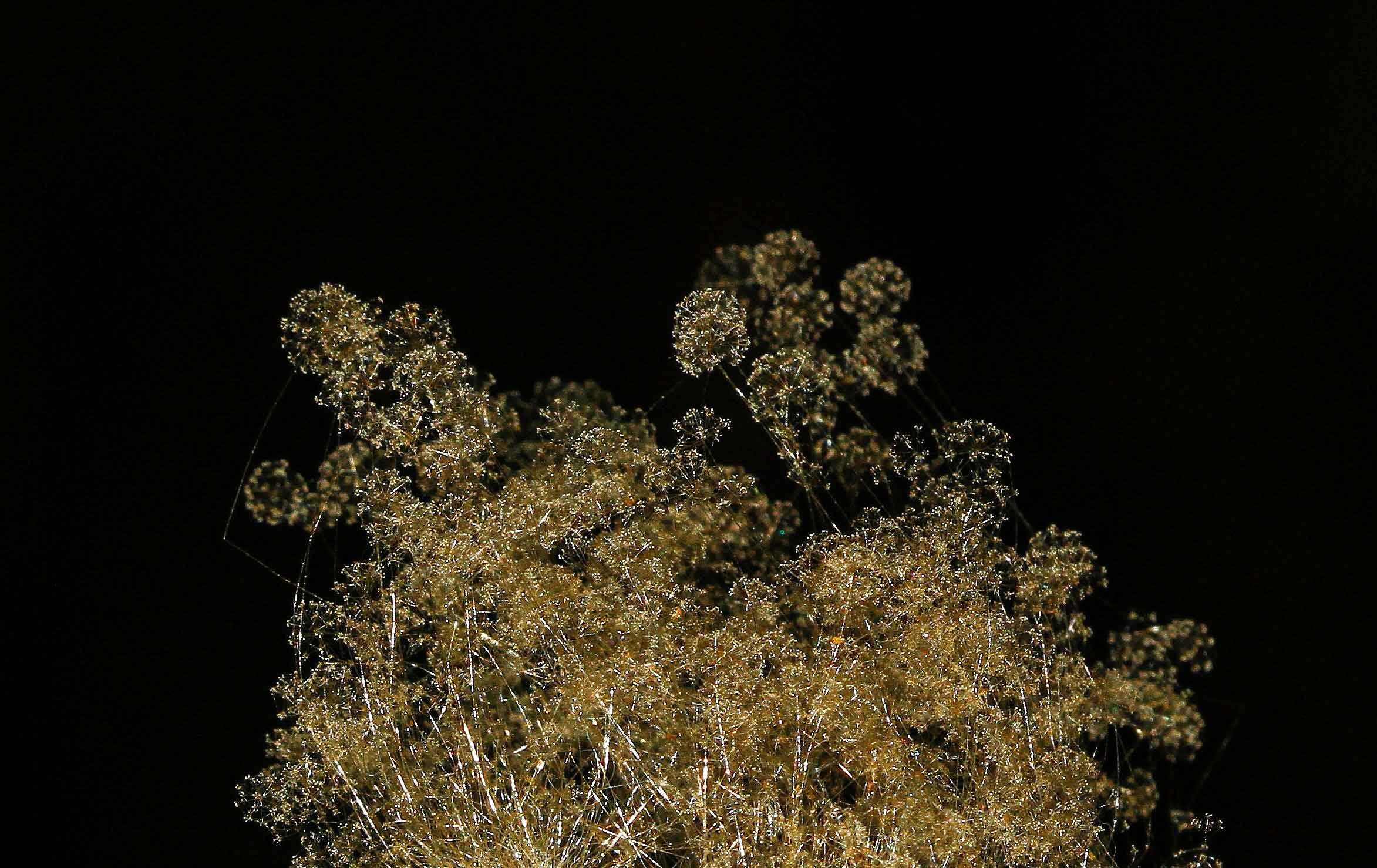 The sparkler fungus (above) is a part of this tree of life, invisible to us partly because it is microscopic, highly seasonal, and because fungal studies are restricted to some specific groups of fungi. Science is catching up on these elusive life forms, but India still lags behind on studying entomopathogenic fungi and the role of parasitism in ecosystem functioning. Entomopathogenic fungi remain integrated in the web of life as invisible protagonists. Some are already being explored as target-specific bio-controllers of crop pests. Others are antagonists, which we know very little about. If we go by their million-year-long association with invertebrates as attested in Baltic amber, they’re here as one of the successful, yet secretive, lifeforms of our planet. Photo: Jaisal Singh Bhati 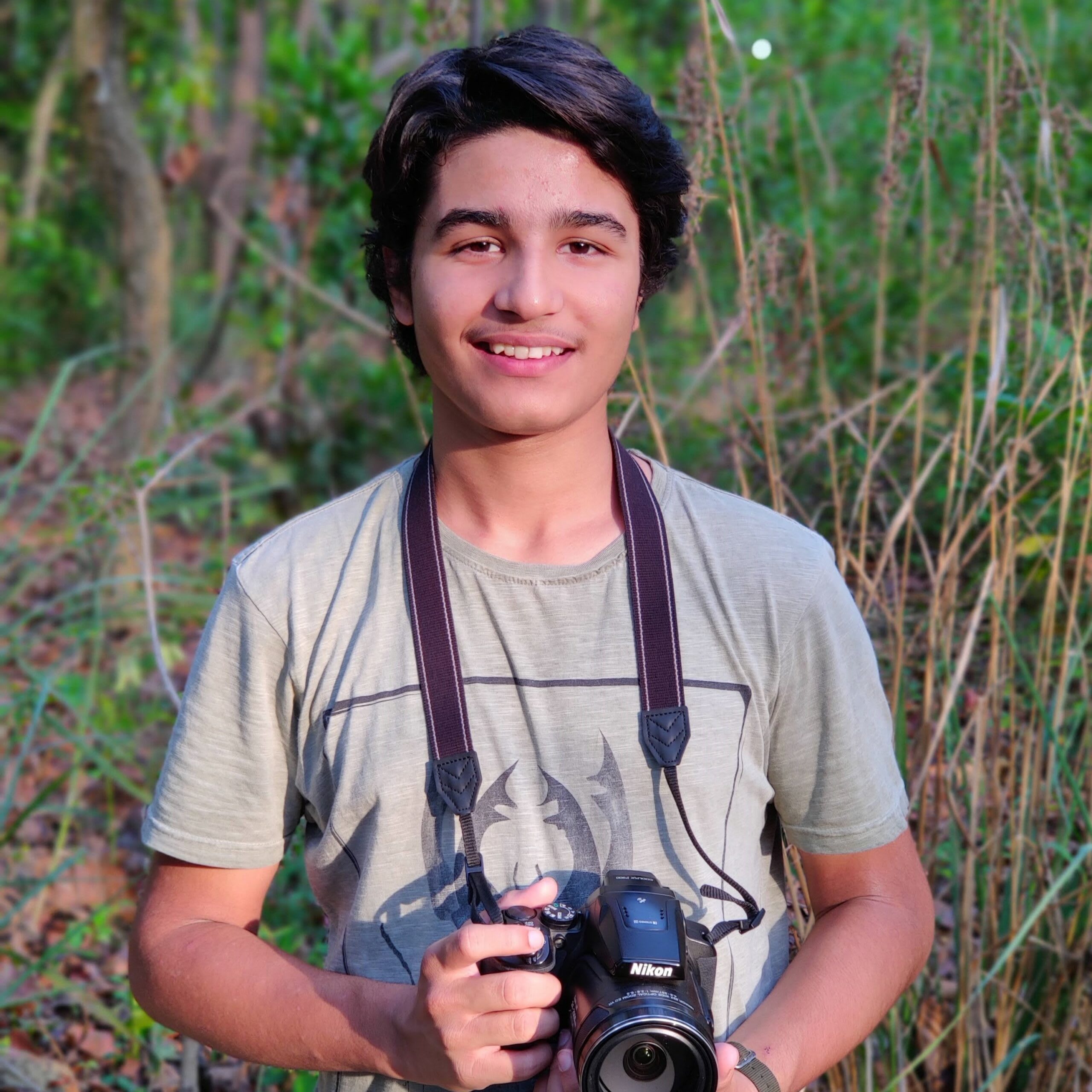 calls Kanha Tiger Reserve his home. He, along with his parents, run the wildlife-friendly Kanha Jungle Lodge, and takes pleasure in forest walks and safaris, admiring all lifeforms in Kanha.

is coordinator for species conservation with WWF-India. He has been studying the gargantuan biodiversity of Kanha Tiger Reserve for the last seven years.