The Amur Falcon and the Mysteries of Bird Migration

Every year, tens of thousands of Amur falcons descend upon Nagaland, creating a natural history spectacle that is both rare and riveting

It was a little after 3 am and the forest was shrouded in darkness. We were sitting in a jeep, groggy-eyed, as we drove through Doyang Reservoir in Nagaland — a state, rich in culture and biodiversity. Every year thousands of Amur falcons descend upon this remote corner of Nagaland. Sheltered by hills that are steep and surrounded by water, the falcons roost here for about a month, foraging on insects, and building their body mass so they can fly across the Arabian Sea and Indian Ocean into Africa. These are seasoned travellers that journey annually, from northern China all the way to Somalia, Kenya, and South Africa. Studies show they cover upwards of 20,000 km every year.

When we arrived at our destination in Doyang, we alighted from the jeep, and walked on a narrow trail to reach a watchtower: our vantage point for the spectacle. Occasionally, something would flap in a tree nearby, but it was too dark to see what it was, so we climbed the rickety ladder up the watchtower and waited. There was a nip in the air, as we sat there quietly, wishing we had brought a flask of hot tea. Thankfully, we did not have to wait long, and by 4 am, there was enough light to see the horizon. The sky was abuzz with what from a distance appeared to be a gigantic swarm of bees.

A closer look with a pair of binoculars, revealed thousands of birds perched on trees all around us, in addition to those in the air. To an untrained eye, the trees looked like they were laden with fruit. It had rained the previous night and many falcons were soggy. Despite this, they remained perched with a sense of tranquillity, while thousands of falcons continued to paint the sky with their flight. Sometimes a flock would dive close to the watchtower, and we could hear the crisp beats of their pointed wings. There was a constant drone in the air, and a monotonous chatter of birds. It was perhaps the largest non-human congregation anywhere on the Indian subcontinent. 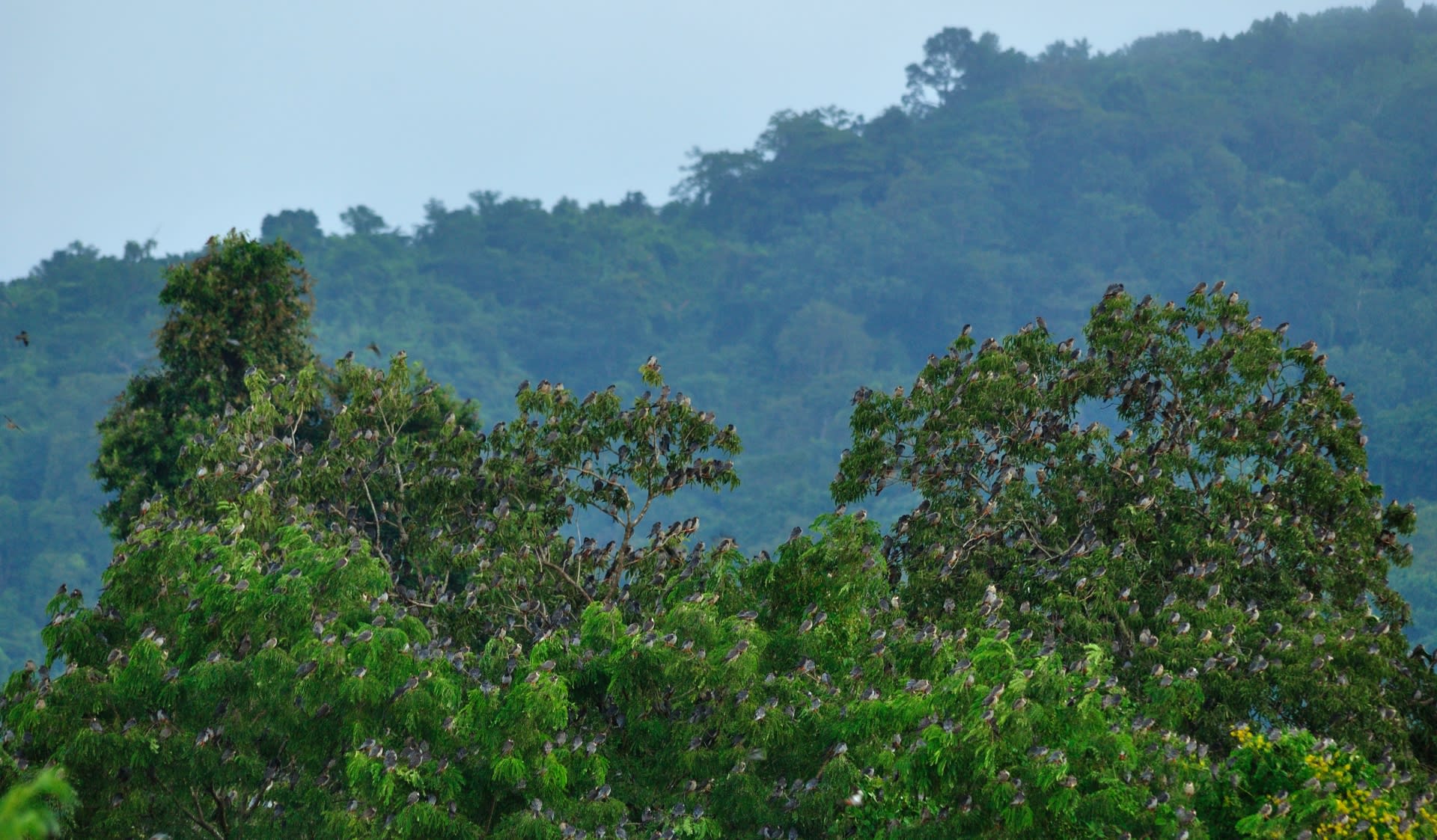 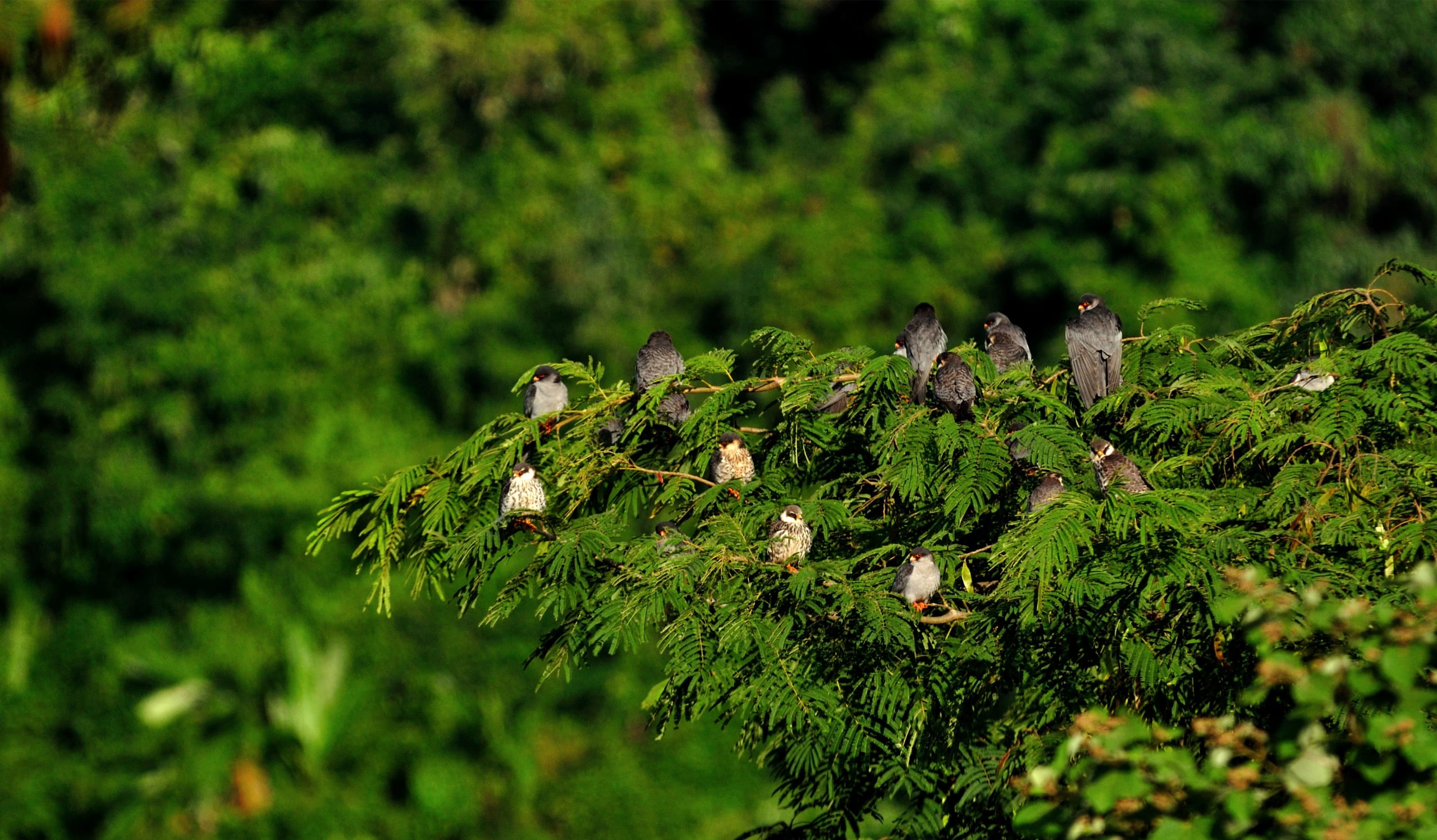 Amur Falcons roost on tall trees in Doyang (left). During the day, the falcons (right) rest and feed on grasshoppers, as they need to fortify themselves for the arduous, nonstop journey across the Arabian Sea into Africa. Photos: Seshadri KS Amur Falcons (Falco amurensis) are one of 69 species of raptors in India. They arrive into and roost in the Doyang Reservoir area in Nagaland. Cover Photo: Seshadri KS

Amur falcons (Falco amurensis) are swift, agile, and little larger in size than the common blue rock pigeon. Males have a sooty, grey plumage, white under-wings, and rufous-coloured feathers on their thighs. Females have a pale, white underside with streaks.

As the day progressed, the sky remained overcast. Birds that had been milling about began to settle, while some flocks flew away, probably in search of food. The relative calm of the roosting falcons was frequently disrupted by the odious call of the eastern jungle crow. Every time a crow would caw, there would be an ‘explosion’ of falcons as they took to the air, settling down again once the jungle crows had moved on to harangue another flock.

By 9 am many birds had flown away, most likely to forage for insects. Taking our cue from the falcons, we headed back for breakfast.

Like many avian species, Amur falcons ruffle their feathers to retain body heat through the night. Photo: Seshadri KS

We returned to the watchtower that evening to see the birds coming in to roost. Initially we felt let a little down, for there were hardly any falcons in the skies and all the ‘fruits’ on the tree were gone, but around 4.40 pm, when the sky began to darken, we saw a distant flock of falcons approaching. Within minutes the sky was full of birds, turning our disappointment into joy.

The flock in the sky was about 100 feet tall and 200 feet wide, and our conservative estimate of their numbers was around 1.5 lakh. Observing the falcon swarm in action was riveting, as was watching the flock disappear: In barely 10 minutes all the birds in the sky had settled down for the night. They had survived the day, only to take to the air again the next morning and prepare to make a long over-sea journey across the equator into Africa. 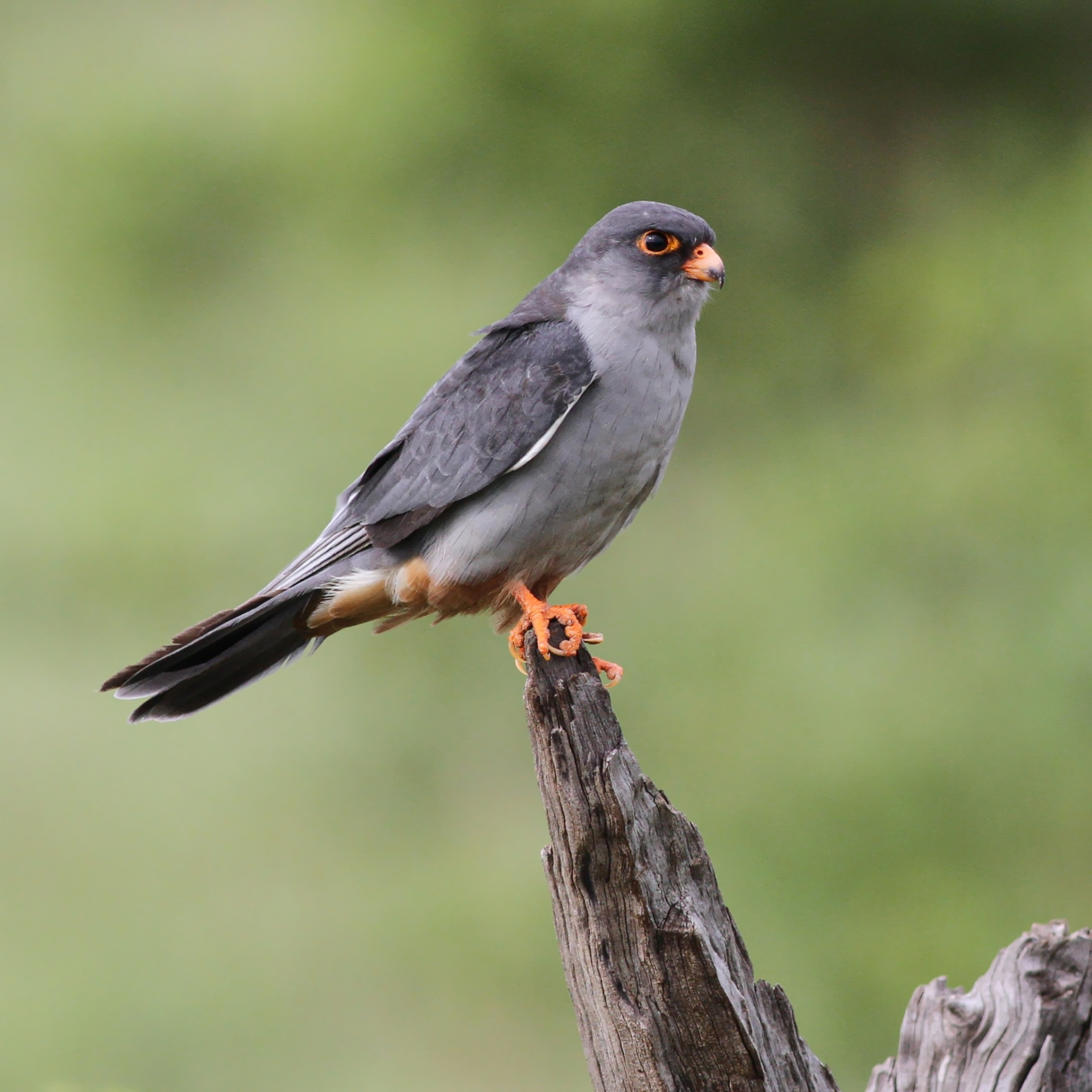 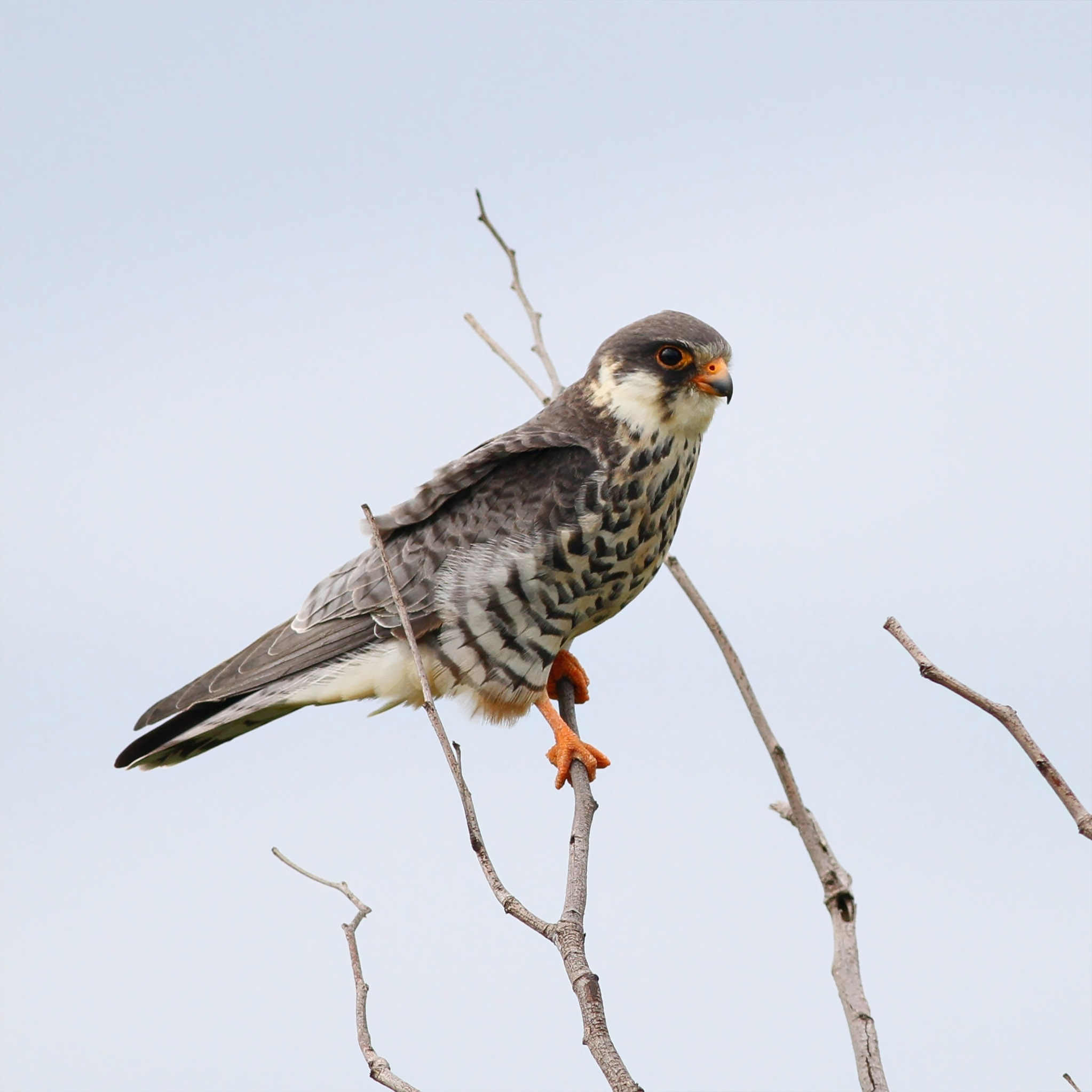 Male (left) and female (right) Amur falcons vary slightly in appearance, with females displaying a mix of black and white plumage on their chest. These images were taken at their wintering grounds in Kruger National Park, South Africa. Photos: Derek Keats –CC BY 2.0

In 2012, an investigation revealed that thousands of Amur falcons had been trapped and sold for local consumption in Nagaland. Poachers would suspend their fishing nets on long poles and unsuspecting falcons would fly straight into them and get tangled. The small birds hardly put up a fight and were no match for the skilled poachers. In Doyang, the Amur flacons were not poached for livelihood, but to be eaten as a local delicacy. Still, the hunting was affecting their population, which had declined over the years. Conservationists worried that they may begin to avoid this place entirely, thus having to stopover at areas with suboptimal conditions for roosting and food availability.

News of this poaching made a global splash and international conservation organisations upped the ante to ensure the birds were not harmed at their staging site in Nagaland. This is where Bano Haralu, a member of the local community, came into the picture. Bano is a former journalist and a managing trustee of the Nagaland Wildlife and Biodiversity Conservation Trust. Along with Conservation India, she led a campaign to stop the rampant poaching and to sensitise the local community about the monetary benefits of being nature guides and homestay owners. The campaign managed to stop the hunting of the falcons. Former poachers became protectors, and began hosting birdwatchers like us in their village homes. Today, they are proud that Amur falcons choose to visit them every year.

A panoramic view of the Doyang reservoir, which was built in the year 2000, across the river Doyang, a tributary of the mighty Brahmaputra. Amur falcons roost on trees in the surrounding hills. Photo: Seshadri KS

Migration in a changing world

Humans have always been fascinated with understanding the migration of birds. Initially birds were thought to use the Earth’s magnetic field to navigate, but there is increasing evidence that their sensory abilities allow them to navigate by smell, and by variation in light levels. By and large, bird migration continues to be a mystery to nature enthusiasts and scientists. Birds have presumably been migrating for centuries, much before modern humans colonised the planet, and scientists have identified clear ‘flyways’, which serve as a corridor for bird migration.

Today, bird migration is in crosshairs with development. In some areas, wind turbines, pitted as green energy, are set up in critical habitats causing injury to and, death of birds. In other parts of the country, wetlands and naturally occurring grasslands — prime habitat for several species of migrant ducks and harriers — are being converted to agriculture fields or plantations, which are suboptimal habitats. To address some of these problems, international treaties — such as the ‘Convention on Migratory Species’ that India has recently ratified — have been created to ensure protection for migratory birds.

The act of migration is a delicate and synchronised performance, involving numerous players. In the case of Amur falcons, it was education that helped the birds fly safely through India, but there is no guarantee that the falcons will receive the same level of protection in other parts of their journey. With fewer stopover sites, the birds require more energy to maintain their flight over the subcontinent, and then over open waters.

One cannot possibly fathom the hazards of long-distance migration. Birds can fall prey to predators, fly into wind turbines, or die of starvation as their food sources decline due to habitat loss and pesticide abuse. Considering the sheer scale of the effort they put in to survive, the least we can do is to ensure them a safe passage.

We can work towards this in a number of ways: By educating locals and authorities on the importance of grasslands or wetlands where birds forage or roost; by enforcing existing wildlife protection laws; and by monitoring the migration patterns with the goal of conservation and better understanding of the species. Ideally, this needs to happen in their native breeding range, migrating pathways, and in their wintering grounds — a dynamic and seemingly insurmountable challenge. Can we succeed in doing so? The only way to know for sure is if the Amur falcons continue to turn up each winter for years to come. 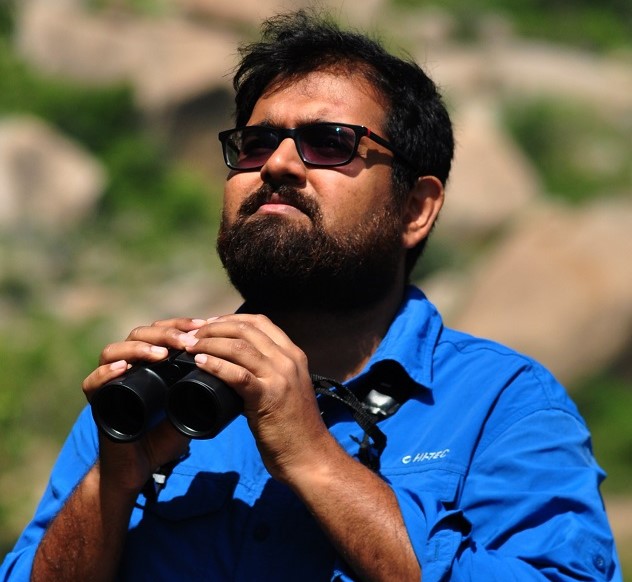