Passing through the outskirts of Bengaluru, I see clumps of banana plants and my eyes automatically dart towards their inflorescences. I scan the trees for an elusive green gecko with spots of red and a turquoise head and tail. Searching for this unique day gecko is a job ingrained in my eye muscles, so they work without any forethought. In reality, the geckos I’m inadvertently looking for don’t live on mainland India at all; they are only found on the Andaman Islands.

The Andaman Islands are lush tropical islands geographically proximate to Myanmar, and much of their biodiversity is endemic, with ancestors originating in the Indo-Myanmar region. As a result, the Andaman day gecko (Phelsuma andamanensis) is like an elephant among whales, so very out of place in these islands.

Over 45 species of geckos, classified in the genus Phelsuma, are endemic to the island nation of Madagascar almost 6,000 km from the Andamans. These geckos are primordial animals, and from our estimates, the Andaman day gecko is at least over 25 million years old. Way older than humans and several large mammals that roam Earth today. How the ancestors of this species of day gecko reached the Andamans remains a mystery. We can only speculate how these geckos’ ancestors arrived in the Andamans, I would bet my money on oceanic currents, exposed lands in the Indian Ocean, or long-distance overseas travel.

The Andaman day gecko is widespread in the Andaman Islands. One can often see a moving fleck of green on human-built structures, forests, betelnut palms, banana plants, and coconut palms. In addition to feeding on insects, this gecko relishes sweet fruits, pollen, and flower nectar. Males tend to be larger than females and can grow up to 13 cm long. They look prettier than females with their turquoise head and tail, but evolution isn’t as unfair as we think, because these colourful males could be more prone to predation. Females are evenly green in colour and are more challenging to spot when perched on a green background. They lay eggs in pairs — little white balls that stick to the surface where they are laid.

Islands are interesting systems to study evolutionary processes because their boundaries are simple — land that ends in water. Most terrestrial animals present on an island, may or may not be present on the next island. Many small terrestrial animals are not adapted to seawater and so we do not expect them to actively cross this barrier to reach the next island. Therefore, plants and animals living on different islands get isolated from one another and change over evolutionary time becoming different species.

When Earth was going through cycles of ice ages, a lot of the ocean water formed ice. The valleys were depleted of water and one could have walked from one island to another on foot. When the ice melted, water-filled up again, blocking biodiversity on the ground from moving between islands (or so we think). Imagine this happening over and over to these islands. Because of this connection, and their geographical proximity to one another, most Andaman Islands have very similar species assemblages. For instance, North Andaman Island and South Andaman Island mostly have the same species of plants and animals. Most of these species are, however, only found in the Andaman Islands and nowhere else in the world. This includes the Andaman day gecko and other geckos. One of the research questions I had was how the repeated cycles of connection-disconnection between islands impacted small animals not known to navigate through seawater.

Endowed with a bluish-turquoise head and tail, the male gecko (right) is larger than the female, which is evenly green. Photo: Sanjay Prasad

To catch a gecko

With two deeply knowledgeable naturalists from the islands, Saw Sathaw and Saw Isaac, I began collecting data from Andaman day geckos across these islands as rapidly as possible. On an average day, we’d lug heavy sampling bags on our backs to begin our pursuit of these emerald beauties. But we often gave up easily after the first round of this catching game (right after a heavy breakfast of paratha-chatpati and sweet chai) and slumped against palm trees to rest for a bit. After basking in the soft morning sun, these geckos were full of energy — jumping, running, and doing everything except flying, to escape our grasp. They often climbed high, way higher than the capacity of our eyes to focus on them, against the blinding sun, and stayed up until we left, a sort of protest against capture.

Harder to spot in their native forest habitats, these geckos can be found in abundance in plantations.  Previous work has estimated about 858 Andaman day gecko individuals on a hectare of plantation or domestic garden, and 3-12 individuals per coconut tree. From my observations, almost every banana plant with a flower has an Andaman day gecko on it. Sometimes more than one, resulting in some eye-catching drama between two geckos who face each other, lift their body and tails, and elegantly sway their tails from side to side. 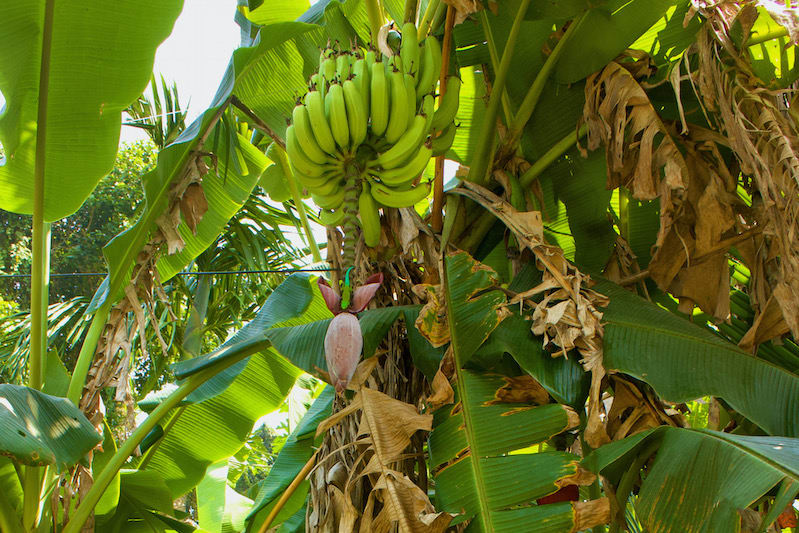 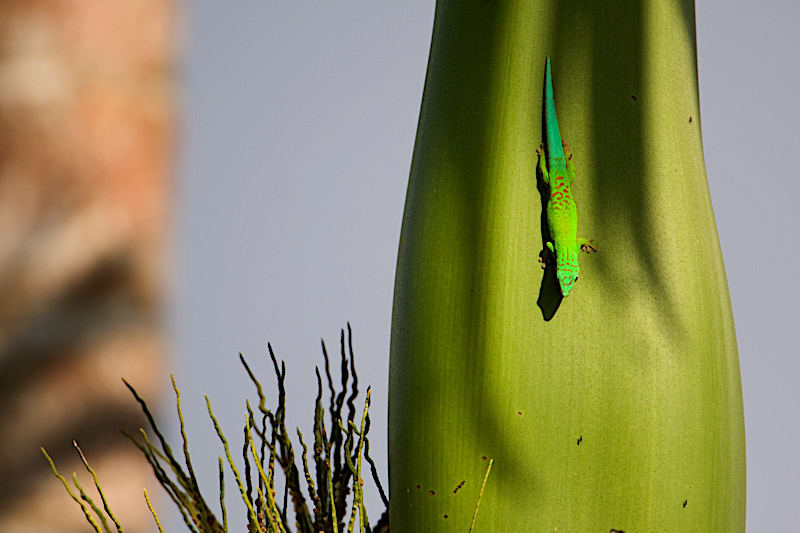 Can you spot the Andaman day gecko in the image on the left? The increasing number of banana, coconut, and betel nut plantations in the Andaman Islands have likely benefitted these geckos, who feed on the fruit and insects attracted to the fruits. Photos:Ashwini V. Mohan (left), Kalyanvarma, CC BY-SA 3.0 (right)

Despite their abundance and frequent sightings, catching them for research is no easy game. Moreover, the Andaman day geckos can change colour to sooty grey when they are threatened. Research on other day geckos has shown that alarm calls from birds trigger this behaviour in some day gecko species, potentially helping them hide in plain sight of a predator.

But as our day progressed and the sun got harsher, these geckos in search of shade tend to climb down. Sometimes they came within our reach. At these moments, we ditched our bags and prepared ourselves to catch them. Skipping and hopping between different islands in the Andamans, we sampled tissues from the tip of these geckos’ tails, because tail tissue can regrow in a few weeks. Not only that, geckos also tend to drop their tails as an anti-predator strategy. While we watch a wriggling tail separated from a geckos body, the individual escapes! It regrows a new tail in a few weeks, albeit not as pretty as the original.

The Andaman day gecko changes its skin colour to sooty-grey or black when threatened. Several other day geckos are known to display this behaviour. Photo: Ashwini V. Mohan

Around the world, island reptiles are going extinct due to the loss of natural habitats, invasive species, and other manmade problems. The Andaman day gecko on the other hand is an island endemic that seems to be benefiting from habitat modification by humans. From our study, we understood that the island populations of these geckos are genetically connected, we looked into parts of their DNA to discern this information. Does it mean these tiny geckos swim across seawater to go mate with an attractive mate on the other island? Probably not, but they may move on boats attached to plants or fruits, or their eggs may lie secretly between the leaves of a banana plant being carried to a new plantation site.

Plantations contain a lot of resources in a small area. We think that these plantations have benefited the Andaman day gecko by providing abundant sources of food. Because this species is known to breed throughout the year, abundant food resources in a small area seem like a great deal for them. Day gecko individuals are probably benefiting from the availability of lots of fruits and fruit-attracted insects in their diet. However, animals that live in very high densities that depend on a homogeneous source of food tend to attract parasites and diseases too. Therefore, we still do not understand the long-term impacts of this native gecko adapting to food resources in plantations and living in high densities. Nevertheless, the Andaman day gecko has seen a few positive twists in its recent evolutionary history, with connected island populations and a boom in population size. There is hope for the continued survival of at least some island endemics in today’s world. 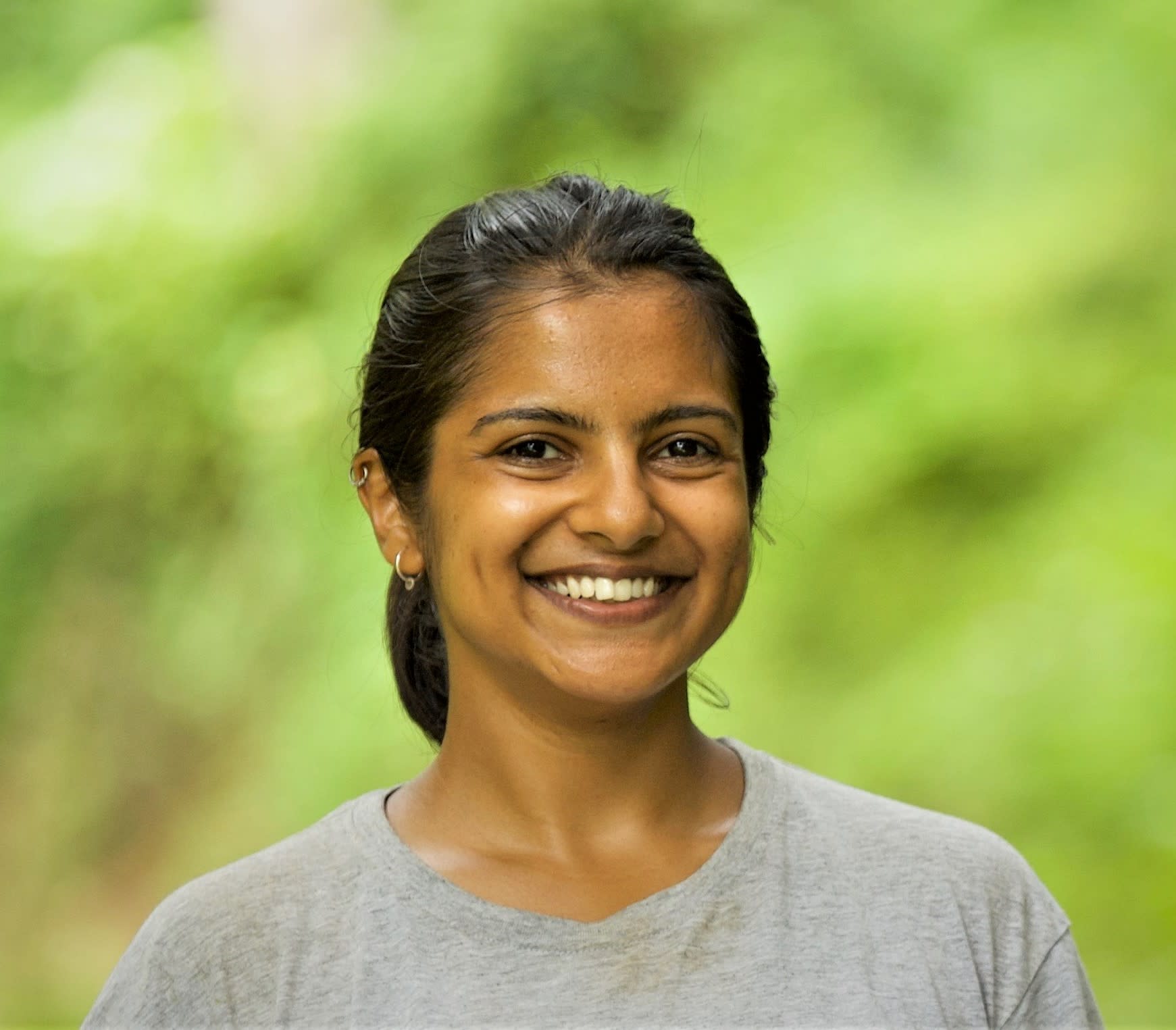 just wrapped up her PhD at the Institute of Zoology, Braunschweig University of Technology, Germany. Her work investigated macro and micro-evolutionary trends of island reptiles.