Antics and Ambush of the Greater Racket-Tailed Drongo

This pretty bird can be quite the aggressor, and is quick to pounce on and grab at food sourced by other birds

One mid-February morning I was taking a leisurely walk along a forest trail on the outskirts of Udhewadi village, near Lonavla in Maharashtra. It was 7 am and there was a pleasant nip in the air. I heard a bunch of babblers making a racket in the bushes and decided to investigate. They were noisy and boisterous, and among the scrappy bunch I spotted a bluish-black bird. On closer observation it turned out to be a greater racket-tailed drongo. I’d seen racket-tailed drongos several times in the past in the Sahyadris and elsewhere, and had often stopped to observe their antics. This time too I didn’t pass up the opportunity.

If I had to describe them in one word, I’d call them thugs. Greater racket-tailed drongos will steal or snatch food from other birds whenever they get the chance. That’s one of the reasons they tend to hang out with other more docile birds.

The glossy, bluish-black racket-tailed drongo has excessively long outer tail feathers, ending in a tuft, which give it an air of elegance and grace. Photo: Dhritiman Mukherjee 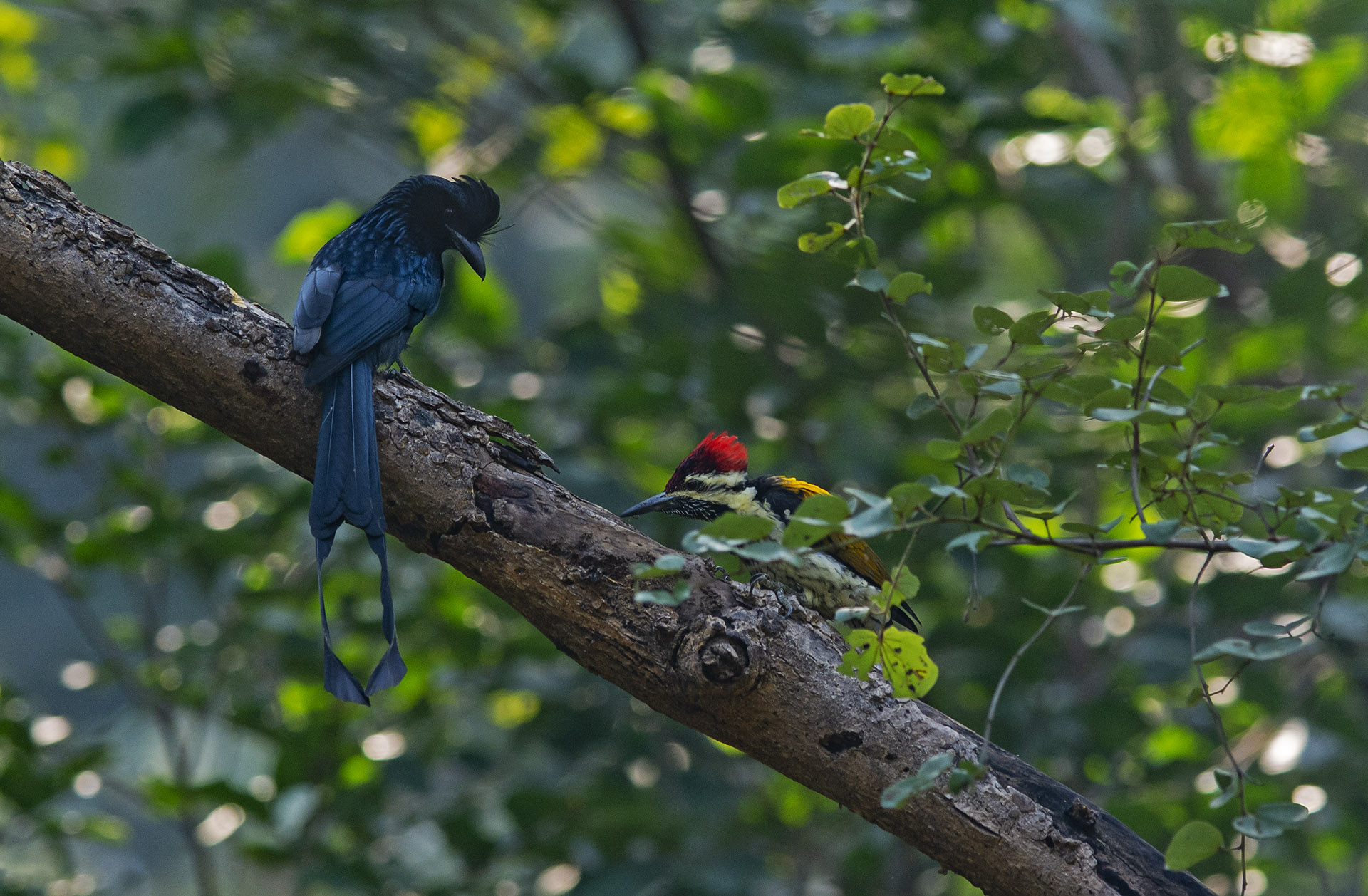 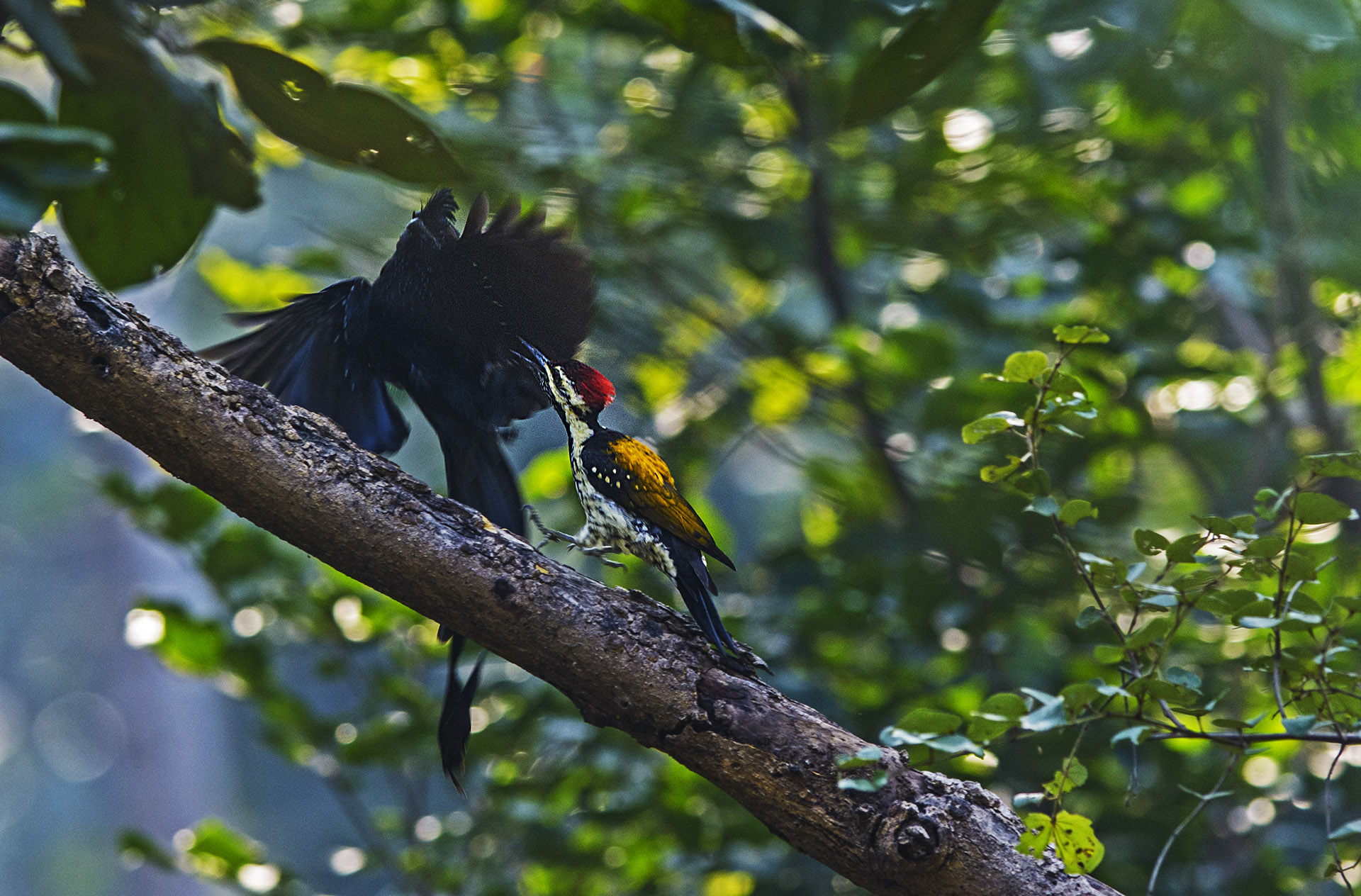 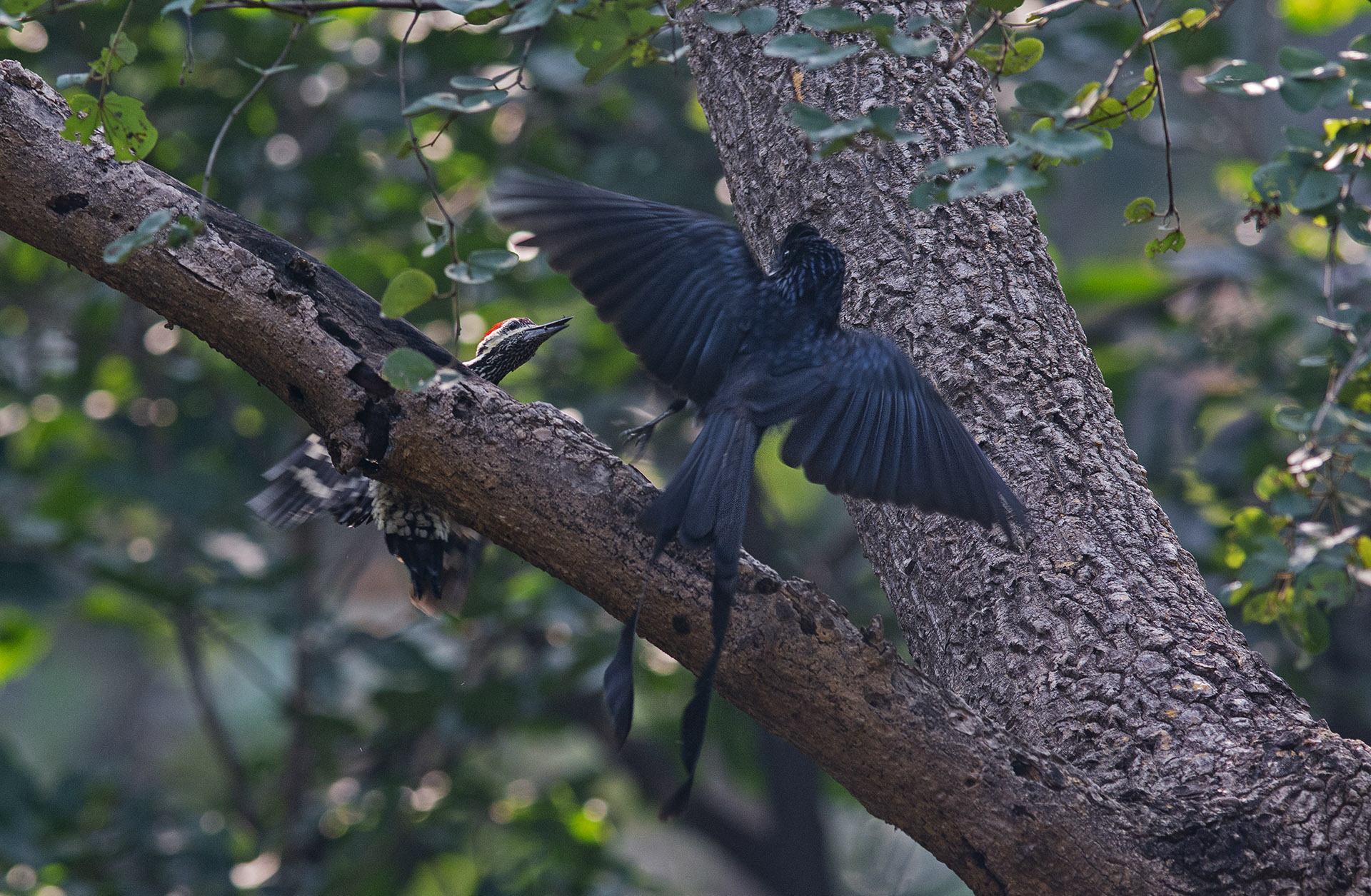 Racket-tailed drongos are known to follow birds like woodpeckers and babblers when they are foraging, moving with them from one branch to another. When the flameback woodpecker flushes out a grub or other insect from underneath the bark, the drongo twitters just like it to distract it, and then quickly pounces to steal the meal. Sometimes, the annoyed woodpecker fights back, creating a fascinating interaction between the two birds. However, the woodpecker tends to tolerate the presence of the racket-tailed drongo and its harrying behaviour, even though it is a known thief and trickster. This is perhaps because the drongo is also an attentive and sharp-eyed guard who will warn the woodpecker of impending danger. Photo: Dhritiman Mukherjee

They are also great mimics, and will imitate the calls of the birds they hang out with, and others as well. They do not do this for the joy of it, or to tease the other birds. It’s a well-planned strategy of distraction so it can grab any insects or prey that other birds may have dislodged. I thought of the drongos’ clever tactics as I watched my friend with his prominent V-tail. He was by then perched at a vantage point on a higher branch, occasionally diving down into the scrub and bush.

The greater racket-tailed drongo (Dicrurus paradiseus) is not a large bird. It’s about the size of a myna, but its two long ‘racket tailed’ feathers, tipped with a tuft, make it look bigger than it really is. I’m not really sure what purpose it serves, but the tuft does give the impression that the bird is being chased by a couple of insects.

What has amazed and intrigued me about the greater racket-tailed drongos I’ve seen is their agility, and the manoeuvres they perform while in flight. This apparently sombre bird can swoop, dive, and turn mid-air as if it were a Spitfire plane in a WWI dogfight, especially if it’s chasing its dinner.

A few years ago, while on a trek to Kareri Lake, near McLeodganj in Himachal Pradesh, we were setting up camp at a forest lodge when I spotted a pair of greater racket-tailed drongos. They were making the most acrobatic moves as a swarm of honeybees swept past. The bees were probably on their way to make a fresh hive with a new queen bee. Almost all other creatures took cover or stayed really still. But for the drongos, this was an opportunity not to be missed. I watched their incredible tacks and swerves, as they tried to grab as many bees as possible.

Racket-tailed drongos have reddish-brown eyes that are very prominent. They stand out against an otherwise dark head, which sports a rather funky tuft of a hairdo. Its sharp eyes are ever watchful from its preferred high perch, as it seeks to plunder insects and food that another bird may have flushed out.

For all its beauty and apparent gentle and delicate appearance, this is a rather aggressive bird. It will even attack larger birds if it feels threatened. On a walk in the hills near Karjat one winter, I once happened to pause by an Indian coral tree (Erythrina indica), also known as the tiger claw tree after the wicked thorns its branches sport. The tree was in full bloom with a profusion of bright-red flowers. I’d have expected that a tree like that would normally be full of birds and insects in search of nectar. However, I found that a solitary greater racket-tailed drongo had perched itself on a high branch and was aggressively attacking any other bird that ventured onto the tree. It even chased off a squirrel trying its luck. I realised that this is not just for it to have sole rights to the nectar of the flowers, but also so it could feast on the buffet of insects, ants, bees, beetles, dragonflies, grasshoppers, moths, and even termites that were attracted to the tree in bloom. 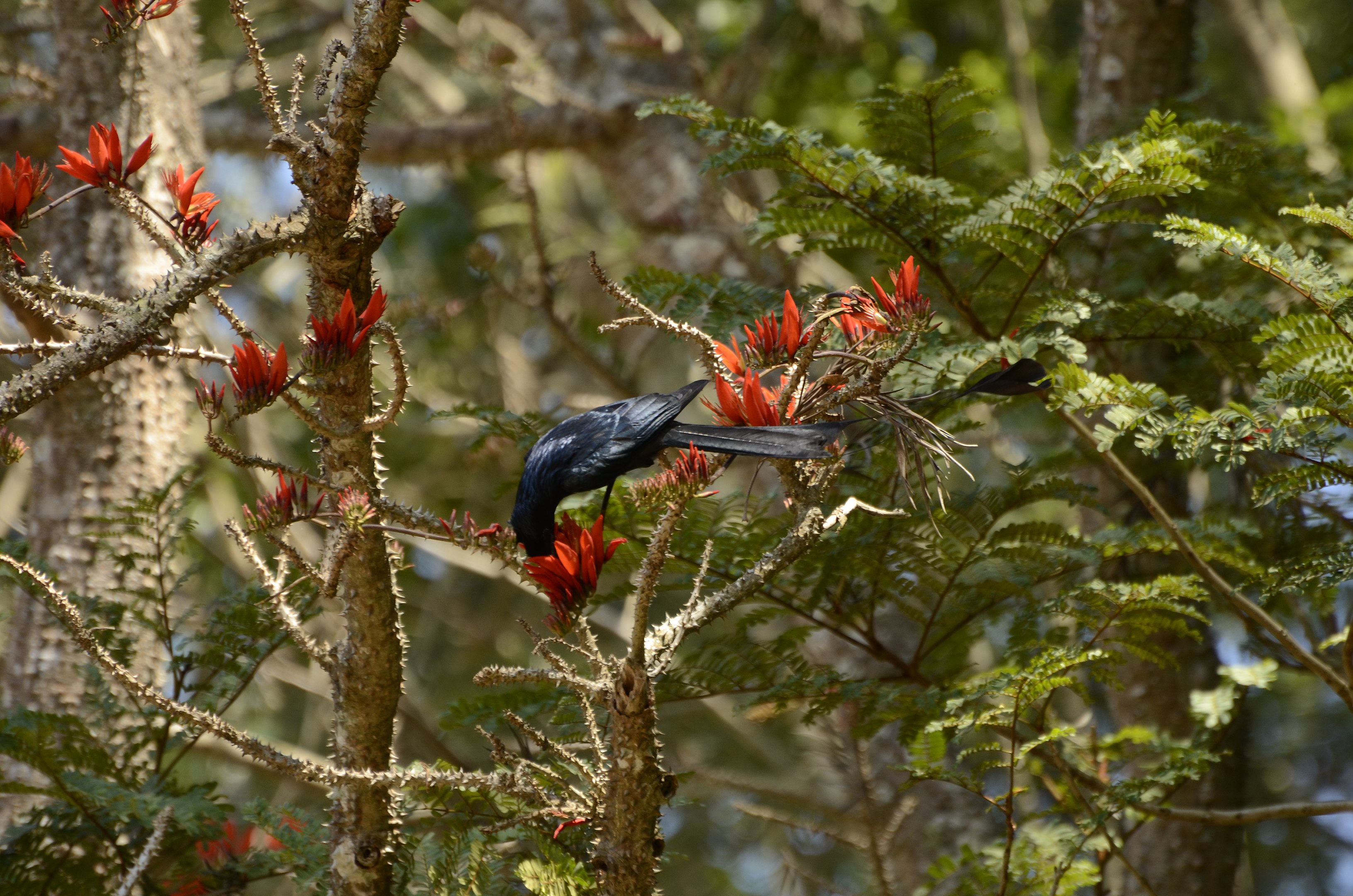 Back on my forest trail, as I was taking in the shenanigans of my long-tailed friend and the motley gaggle of babblers, I heard a low humming noise and a ‘tuk-tuk’ sound. Then a flash of blue whizzed past me, quite close to my head. It was another greater racket-tailed drongo, one that I had not even noticed there. I think he was telling me it was time I continued on my walk, and left them to their ambush tactics. 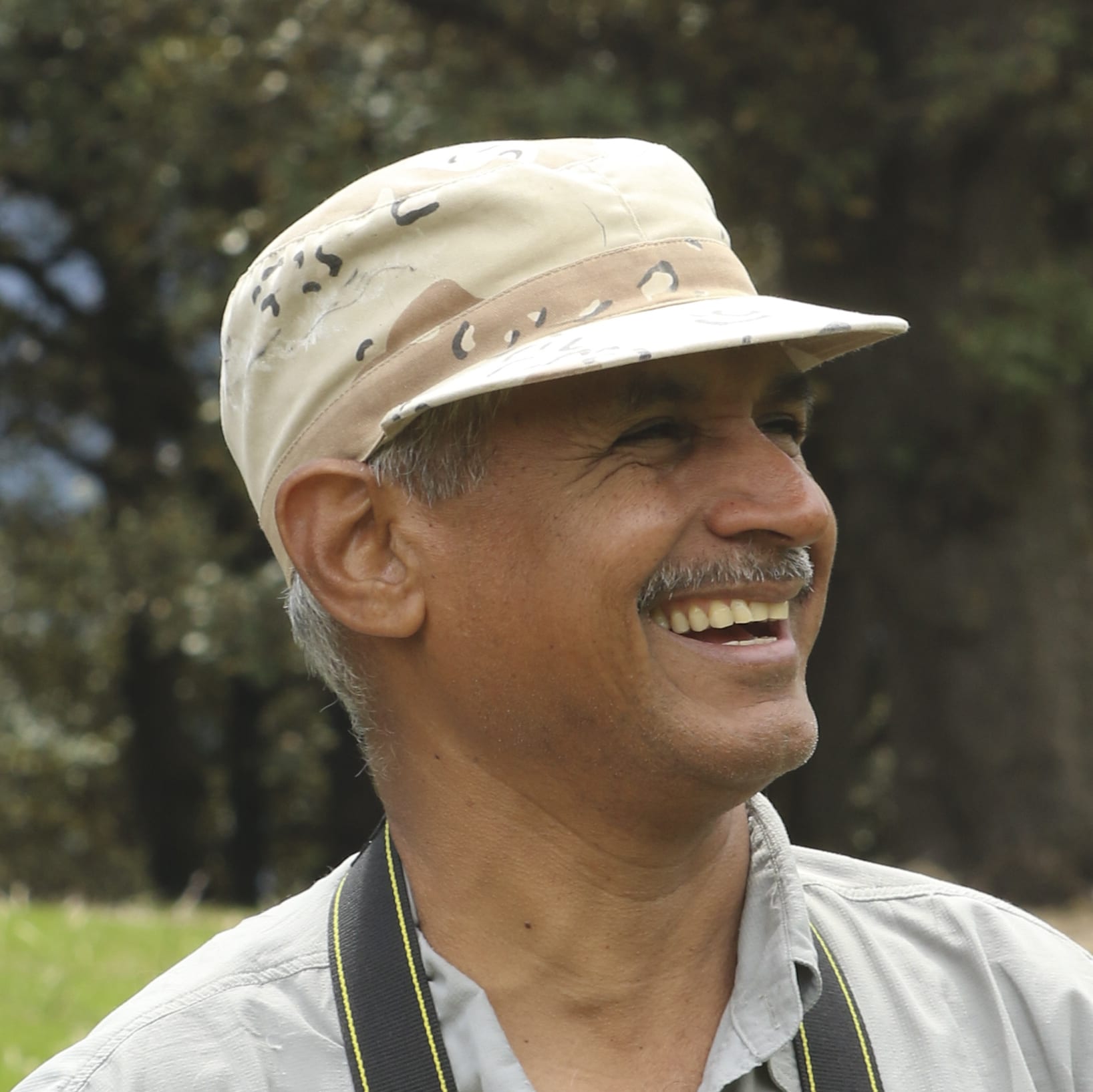 runs an outdoor adventure and education company (www.outboundadventure.com). He happily spends both his work life and leisure time in forests and mountains.