Turtle Trouble on the Brahmaputra

Though the endangered Assam roofed turtle receives legal protection at par with the Bengal tiger, it is still poached for the illegal pet trade and its eggs collected for consumption

By Rishika Dubla and Shailendra Singh

By Rishika Dubla and Shailendra Singh

On 6th May 2019, the United Nations issued its first comprehensive report on global biodiversity. While the loss of biodiversity on our planet is not news, what is remarkable is that this report officially declares that the current rate of species loss is unprecedented in human history — and that the decline is up to hundreds of times faster than during the past ten million years. Moreover, it declares that over one million species of plants and animals face extinction within the next few decades.

While large charismatic mammals such as tigers, rhinos, elephants, and leopards tend to receive attention and conservation funding, lesser-known, equally threatened reptiles are often overlooked. Among the most threatened groups of vertebrate animals on Earth are turtles. There are over 356 known species of turtles occupying a variety of land and water ecosystems, with nearly 61 per cent of these threatened or already extinct.

The Assam roofed turtle prefers cooler, slow-flowing rivers, but stays away from muddy banks. It is also spotted in the beels or waterbodies of Kaziranga National Park, swiftly diving into the waters and hiding among rocks or floating foliage, at any sign of threat. Photo: Dhritiman Mukherjee

There are 24 species of freshwater turtles and 5 species of freshwater tortoises found in India. Some areas of north and northeast India are considered world turtle biodiversity hotspots. Unfortunately, over 50 per cent of these species are ‘threatened’ under the IUCN Red List. The Brahmaputra River in northeast India is particularly rich in turtle species, with 21 of these present, earning it the title of a “Turtle Priority Area”. One of the species found within this river system is the Assam roofed turtle (Pangshura sylhetensis), named for the existence of a conspicuous spiked vertebral keel.

This small olive-brown turtle has a pink stripe running from each eye to the back of the head, and a shell (or carapace) that grows to a maximum of 20 cm. This turtle likes to live in fast-flowing streams and rivers, though the younger ones are found in shallow sections where the current isn’t strong. 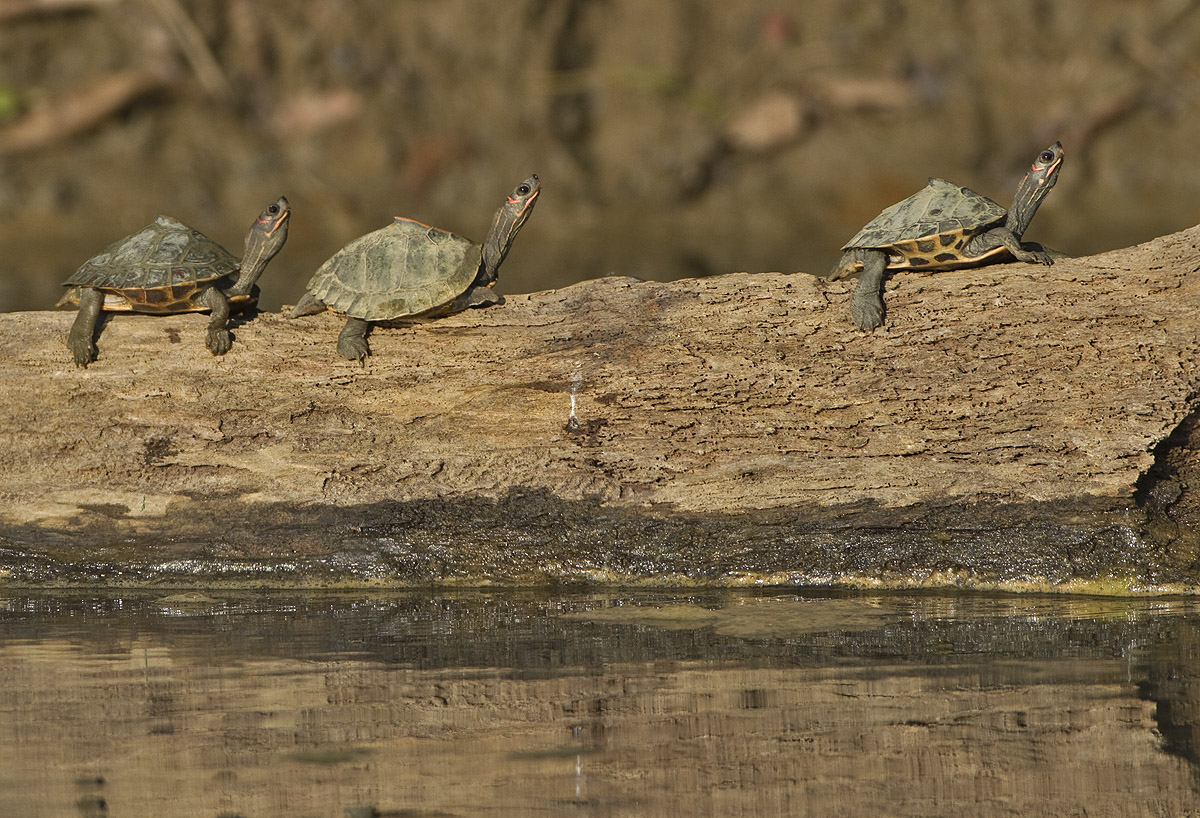 The turtle is classified as ‘endangered’ and is listed in Schedule I of the Indian Wildlife Protection Act 1972, which is the highest legal protection, at par with the Bengal tiger and the greater one-horned rhino. In India, the only surviving small and fragmented population is found along the Brahmaputra near buffer zones of protected areas in Assam, especially Kaziranga and Nameri national parks. A small, satellite population is also found in north Bengal and the Sylhet region in Bangladesh.

Also known as the Sylhet roofed turtle, it faces several threats. In many areas, the turtles are considered sacred and kept in homes or given to temples as offerings. The Northeast is also a major trade route for illegal trafficking, importing freshwater turtles to international meat and pet markets. In September 2018, 43 specimens were confiscated from a trader as far away as Chennai. Accidental death due to uncontrolled fishing is another common threat to this turtle. Apart from these direct threats, human intervention along the river is steadily destroying their habitat. 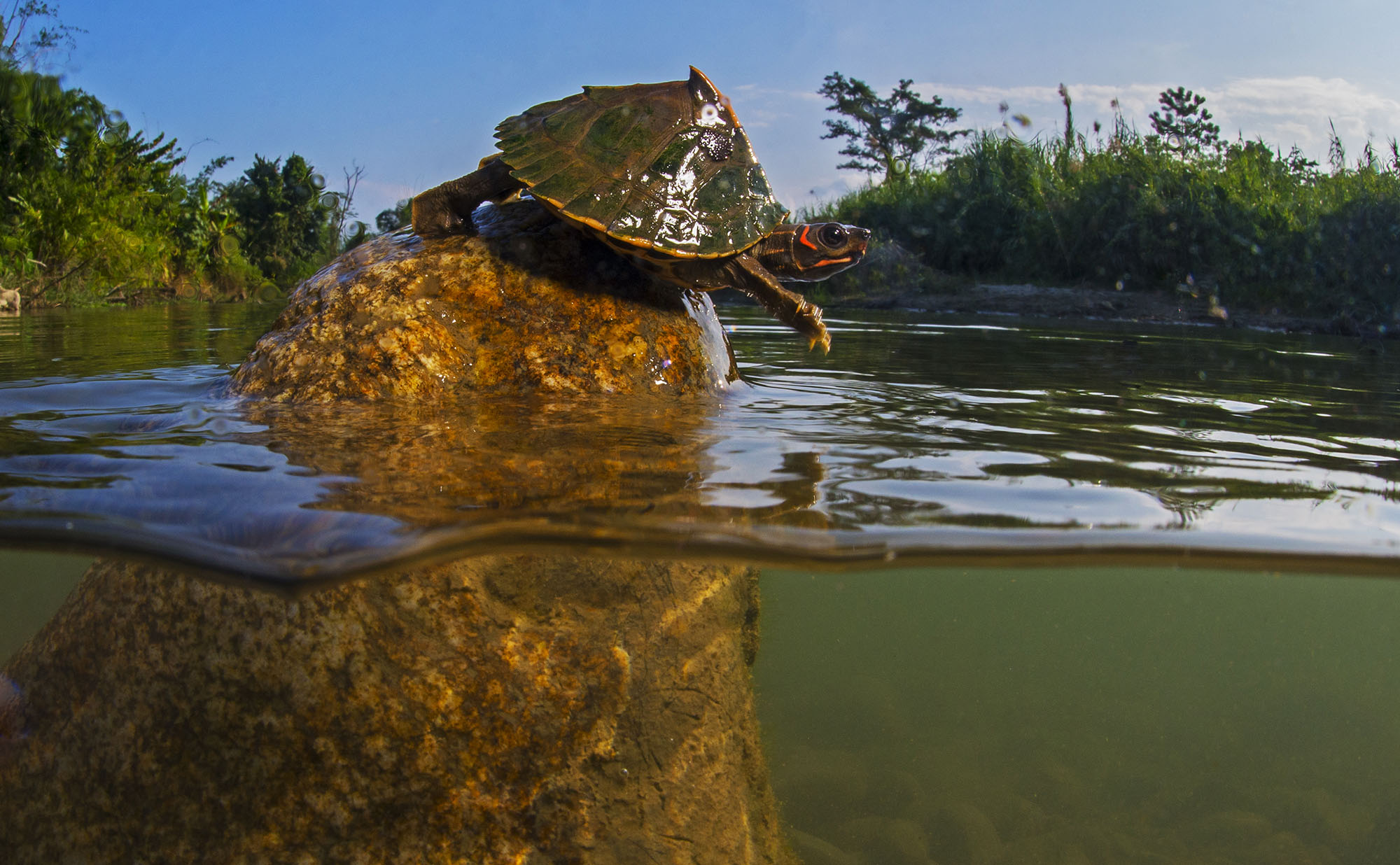 The Assam roofed turtle has a small head with a slightly protruding snout, a spiked keel on its carapace, and yellow stripes on its neck. Females are about twice the size of males. Photo: Dhritiman Mukherjee

Turtle Survival Alliance in collaboration with the Wildlife Conservation Society, is initiating conservation efforts for the Assam roofed turtle under their India Turtle Conservation Program (ITCP). The programme is currently working towards establishing a nest protection and captive breeding program to increase wild populations. They are also working closely with the Guwahati Zoo, Assam, which has an enclosure to house rescued animals. Informed by national and international experts, zoo officials and keepers, the enclosure is enriched with lush endemic vegetation and built to cause least disturbance to captive animals. With generous funding from the Mohamed bin Zayed Species Conservation Fund, the team plans to use this facility to eventually house breed assurance colonies for this species.

The team has also made great strides in involving local communities in conservation action at Bishwanath ghat, one of the turtle’s prime habitats. They have attempted to increase awareness amongst riparian communities at selected chars (river islands) to reduce accidental drowning in fishing nets. Moreover, they partner with various temple authorities and organisations such as Help Earth to upgrade the husbandry conditions of selected populations of the reptiles in temple ponds, and to discourage the practice of housing turtles as pets through nationwide campaigns.

Dr. Shailendra Singh has spearheaded the Turtle Survival Alliance- India Turtle Conservation Program since 2008 as its director and has been instrumental in implementing over 167 conservation, research and education projects across the country.

Rishika Dubla is a Senior Project Officer with the Turtle Survival Alliance/Wildlife Conservation Society India program, splitting her time between the Lucknow office and the Tarai Project field station.