This small deer prefers to be alone in forest cover and dense vegetation. When it senses danger, it calls out with a harsh bark that can be heard at least a kilometre away 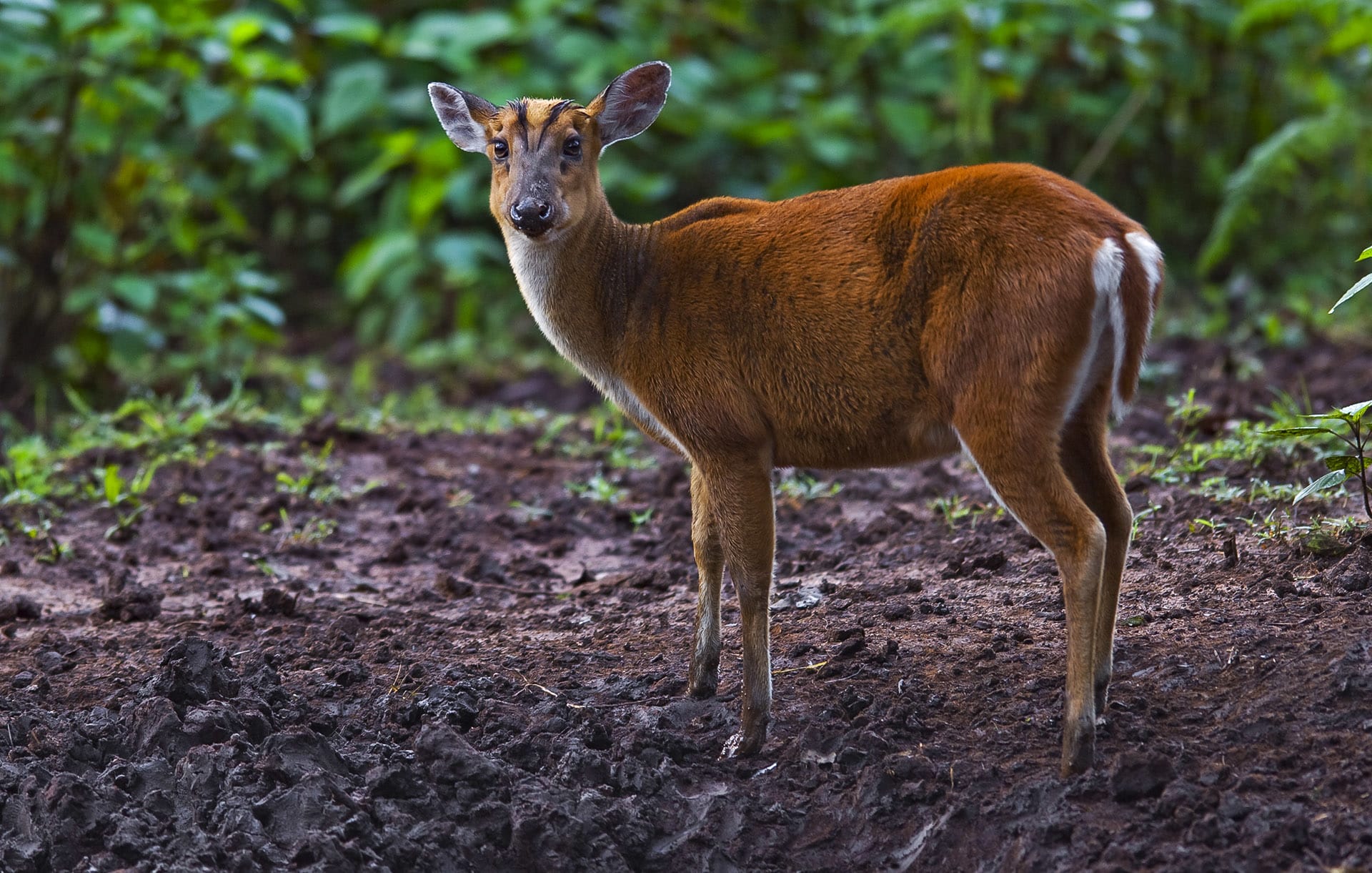 There’s a cherubic face in front of me; its mouth is full as it munches on leaves picked off the forest floor. Sharp vampire-like fangs poke out of its mouth making me wonder if it’s as harmless as it looks. I put my binoculars down and am about to ask our forest guide why he called it a “barking deer”, but I’m distracted by another approaching safari jeep. The creature looks in the direction of the approaching vehicle and in a flash makes two quick bounds and disappears into the undergrowth. As we progress on our safari, our guide reconfirms it was a barking deer or Indian muntjac (Muntiacus muntjak). “Arre, aapne toh iska alarm call nahin suna, ussi se toh uska naam padta hai” (Oh, you haven’t heard its alarm call? That’s what gives it its name), says our guide. 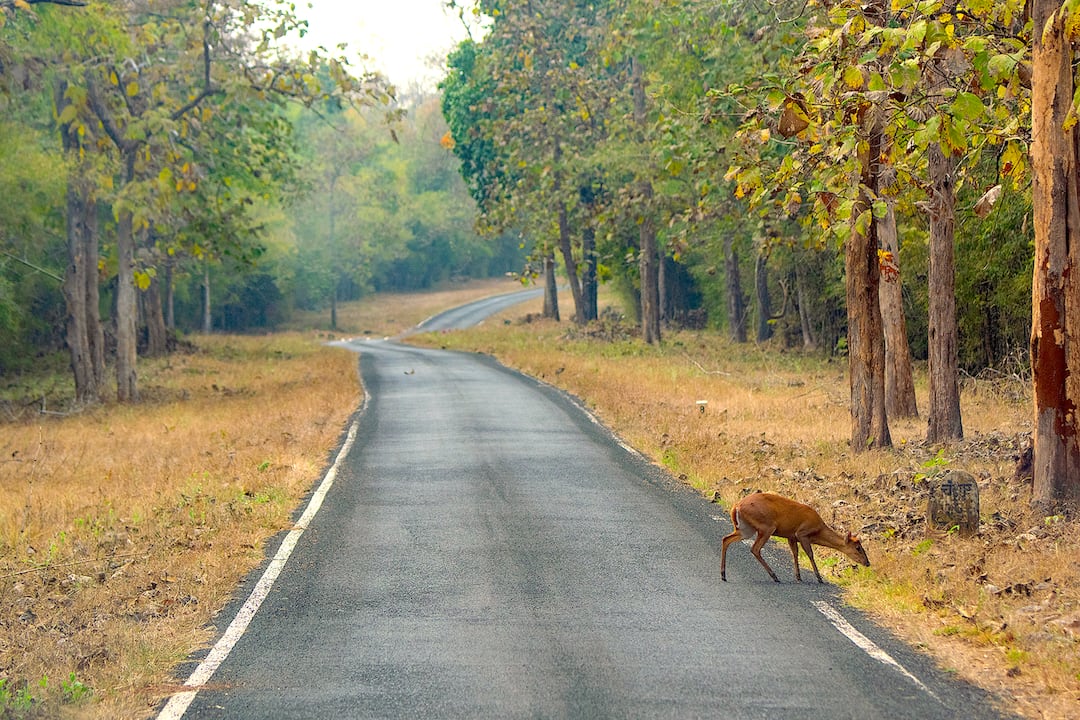 Barking deer are rarely seen out in the open without an escape route into cover. Even here in the Tadoba-Andhari Tiger Reserve, the deer emerged for a couple of seconds to cross the road before disappearing into the bamboo thicket. Photo: Shashank Birla Cover photo: The Indian muntjac or barking deer is endemic to South and Southeast Asian countries but has a wide distribution from northern India to Java, Indonesia. It tends to live mostly within and in the vicinity of primary and secondary forests. This one was photographed in the BR Hills, Karnataka. Cover Photo: Dhritiman Mukherjee

The barking deer is also called kakar (pronounced kaa-kad) through much of India. I have often had the pleasure of seeing it foraging in the grand sal forests of Corbett and spotted it a few times while walking the nature trails of Sanjay Gandhi National Park in Mumbai. This species prefers forest cover and dense vegetation.

A couple of things strike you straightaway when you spot this deer. It’s size. Just under two feet in height, body length of three-to-four feet, and average weight of 30 kg — this is certainly one of the smaller deer species found in India (the nocturnal mouse deer or Indian chevrotain is the smallest). The barking deer’s rust-brown fur is in stark contrast to its white vent (region beneath the tail). The male has short antlers that curve backwards (and canines that form “tusks”), while the female has bony knobs instead of antlers.

The second thing you notice is that they are generally alone, with a mate, or females are with a fawn aged up to six months. Unlike other deer which often live in herds, Indian muntjacs are largely solitary animals. They mark territory with secretions from glands on their face (below the eyes), as well as by scraping the ground, grass, and tree bark; males are known to use both their hooves and canines for this. Their general nature is a bit skittish, as they are prey for a variety of carnivores in the jungles, ranging from tigers to crocodiles. When they encounter such predators or sense the presence of one they let out the familiar, harsh barking call almost akin to a dog’s. The sound is loud enough to be heard at least a kilometre away, and it’s what gives this deer its name.

Barking deer have adapted to changes in their landscape due to human activity, like this individual seen in a tea estate in Assam. They have resorted to feeding on bushes and shrubs growing in and around plantations, and may feed on tea seeds as well. Photo: Dhritiman Mukherjee

Present-day species of Muntiacini or muntjacs are largely found in South and Southeast Asia (the exception is a few feral populations in countries like the UK). According to fossil records, members of this species may have been among the earliest deer to develop antlers.

Vampire teeth, small size, solitary nature, and a dog’s bark makes one wonder why the barking deer is so different from the rest of its kin. What are the factors that led to the evolution of such different traits for muntjacs? These are questions without clear answers. However, looking at the evolution of the Cervidae family (including all extant and extinct deer species), we find that the earliest ancestors of present-day deer did not have any antlers, but tusks (and even a similar body structure) like the barking deer of today. In time, with the spread of grasslands across the world, the social structure of these animals evolved, and they started residing in herds. Antlers seem to have replaced tusks as the primary organ for combat and territorial assertion. Being more obvious for territorial displays, they presumably offered an advantage. Perhaps they reduced the chance of major injuries (having a visibly formidable antler set could ward off potential challenging males). The general preference of most muntjac species for dense vegetation, their social structure, and the fact that they are still equipped with those tusks, indicates this group represents an important evolutionary link for the family as a whole. This deer has undergone relatively smaller change as opposed to their cousins, Cervini or “true deer” (which includes sambar, spotted deer, and barasingha or swamp deer)

Barking deer have made themselves at home in Mumbai’s Sanjay Gandhi National Park and the neighbouring Tungareshwar Wildlife Sanctuary. Their presence has also been recorded in the Karnala Bird Sanctuary just outside city limits. Photo: Shashank Birla

The existence of those sharp canines raises another question and there is still some debate about it for the Indian muntjac. Are they herbivores, or do those canines indicate a possible inclination for meat as well? According to most studies, they are primarily used for territorial purposes and in combat with other males. However, the study of their diet has been a tricky matter. There is common agreement that it does consume plant matter. However, even this herbivorous diet is subject to some debate. Some studies suggest they are primarily browsers and nibblers, feeding on leaves, fruits and shrubs. Others suggest grazing (feeding on ground vegetation including grass) is also very much part of their behaviour. Still other sources suggest the barking deer is an omnivore, that they may consume bird eggs and carrion as well.

While this may come as a surprise, the fact is that it is not just barking deer, several species of deer across the world have been recorded to consume animals or animal remains as an additional dietary supplement, though it is an uncommon phenomenon.
Two recent studies (Ajaya Nagarkoti et al, 2005; O Ilyas et al, 2004) of the barking deer’s diet make no mention of animal remains found in the excreta. In my discussions with guides and forest guards across different parks, no one has actually encountered this deer feeding on animal remains. That doesn’t mean it is not an omnivore; like other deer species, it may opportunistically feed on animal remains from time to time, though that is probably a rare event.

Barking deer are smaller than their more gregarious cousins, the sambar and spotted deer. Though spotted and barking deer are usually not seen in each other’s company, but a visitor may sometimes have encounters like this one near a waterhole in Corbett National Park. Photo: Shashank Birla

While barking deer are common inhabitants of India’s jungles, they are nevertheless always under threat. Their meat is prized as a delicacy in many places (particularly Nagaland, where the butchered remains and carcasses are often found in markets), therefore illegal hunting remains an ever present danger. While not a large depredator of agricultural fields, they are sometimes killed to protect crops. The barking deer is a protected species under Schedule 3 of the Wildlife Protection Act, and while the law states a maximum species of three year’s imprisonment and a fine of Rs 25,000 or both in case of conviction, rarely are such penalties enforced.

Besides hunting, habitat loss is one of the larger threats for this species as it requires a healthy forest for survival. For the moment, the current conservation model of protected areas in India has ensured that the species is largely out of danger. It has benefited from the umbrella model of declaring tiger reserves and its fortunes are to an extent, tied with the conservation of its more charismatic co-inhabitant.

From my own perspective as a safari-goer I hope others too will appreciate this shy resident of the Indian jungles. It tells us that even the most common inhabitants of our wilderness areas are products of millions of years of evolution, and still carry with them mysteries to be revealed.