Once admired for its regal appearance and capricious aerial displays, unfortunately the Bengal florican is better known today for its critically endangered status

There are some species that enchant you instantly. This happened to me when I first saw the Bengal florican in April 1985 in Dudhwa National Park, Uttar Pradesh. Thirty-five years is a long time for love and passion to continue, but my fascination of the ‘king of the wet grasslands’ has not diminished a bit. Actually, its allure has increased. Its mysterious and enigmatic life history, its solitary regal appearance, its wet, tall grassland habitats that harbour many globally threatened species, its capricious aerial display, and the vastly different attire for male and female floricans, will not leave any naturalist uninspired.

Bengal florican Houbaropsis bengalensis is one of the most threatened bustard species of the world. Since 2008, BirdLife International and IUCN have listed it as Critically Endangered due to its very small and declining population. It is listed under Schedule I of the Indian Wildlife (Protection) Act 1972. Once widely distributed in the Gangetic and Brahmaputra plains south of the Himalayas in northern India, Nepal, and Bangladesh, it is presently restricted to only a few pockets of protected areas (PAs) in India and Nepal. Another disjunct population, recognized as a separate sub-species H. bengalenis blandini, is found in Cambodia. It is extinct in Bangladesh and Vietnam, and interestingly, in Bengal that gave it its name.

The Bengal florican once thrived in the grasslands and plains of northern India, Nepal and Bangladesh, but today a threatened, declining population survives in a few closely monitored habitats. Photo: Dhritiman Mukherjee

The chief problem for the Bengal florican is its preferred habitat — tall, wet grasslands of north India and Nepal’s terai, and the floodplains of larger rivers. This is the habitat coveted by human beings. The result is that almost 95 per cent of such grasslands have been converted into crop fields or other human use, leaving small patches in some protected areas such as Dudhwa, Kishanpur Wildlife Sanctuary and Pilibhit Tiger Reserve in Uttar Pradesh, and Kaziranga National Park, Manas Tiger Reserve, Orang National Park in Assam, and D’Ering Wildlife Sanctuary in Arunachal Pradesh.

The Bengal florican is not the only victim of this tragedy. Its fate is shared by many other species that evolved to live in these grasslands. The most famous is the one-horned rhinoceros. Perhaps less famous, but not less important animals are swamp deer, hog deer, hispid hare and pygmy hog — each will require separate analysis. My interest and concern extend to birds such as swamp francolin, Manipur bush-quail, slender-billed babbler, Jerdon’s babbler, black-breasted parrotbill, Hodgson’s bushchat, and Finn’s weaver, that share their home with the Bengal florican and also face the same unpredictable future.

Terai grasslands, found at the foothills of the Himalayas, are one of the most threatened ecosystems of India. Grasslands are often dismissed as ‘wastelands’, and are carelessly repurposed for agriculture, real estate, and infrastructure growth, endangering a wide variety of species that thrive in these rich ecosystems. Photo: Dhritiman Mukherjee

The Bengal florican is basically a cursorial bird (adapted to walk), but it is capable of long flights. Its food consists of insects, grasshoppers, beetles, ants, occasionally lizards and small snakes. It also eats grasses, flowers, shoots, berries and seeds. It is normally a solitary bird. Adult males become territorial in the breeding season and appear to favour relatively open, short grasslands (50 cm to 100 cm tall) sometimes with patches of tall grass and scattered bushes. Females, which are difficult to see, probably spend much of their time in tall grass.

During the breeding season, males go back to their traditional display territories. Some territories have been occupied over the last 30 years of monitoring (e.g., Sonaripur grassland in Dudhwa). Good territories are at premium and adult males fight for them. Once the dispute has been settled, the winning male spends most of its time in its territory. Once the rival males have been pushed away, it is time to show off, to attract females for mating. In the tall grasses it is not easy to be seen. No problem. It jumps above the tall grass. Its aerial display is a spectacular behaviour, delighting birdwatchers and documentary makers. 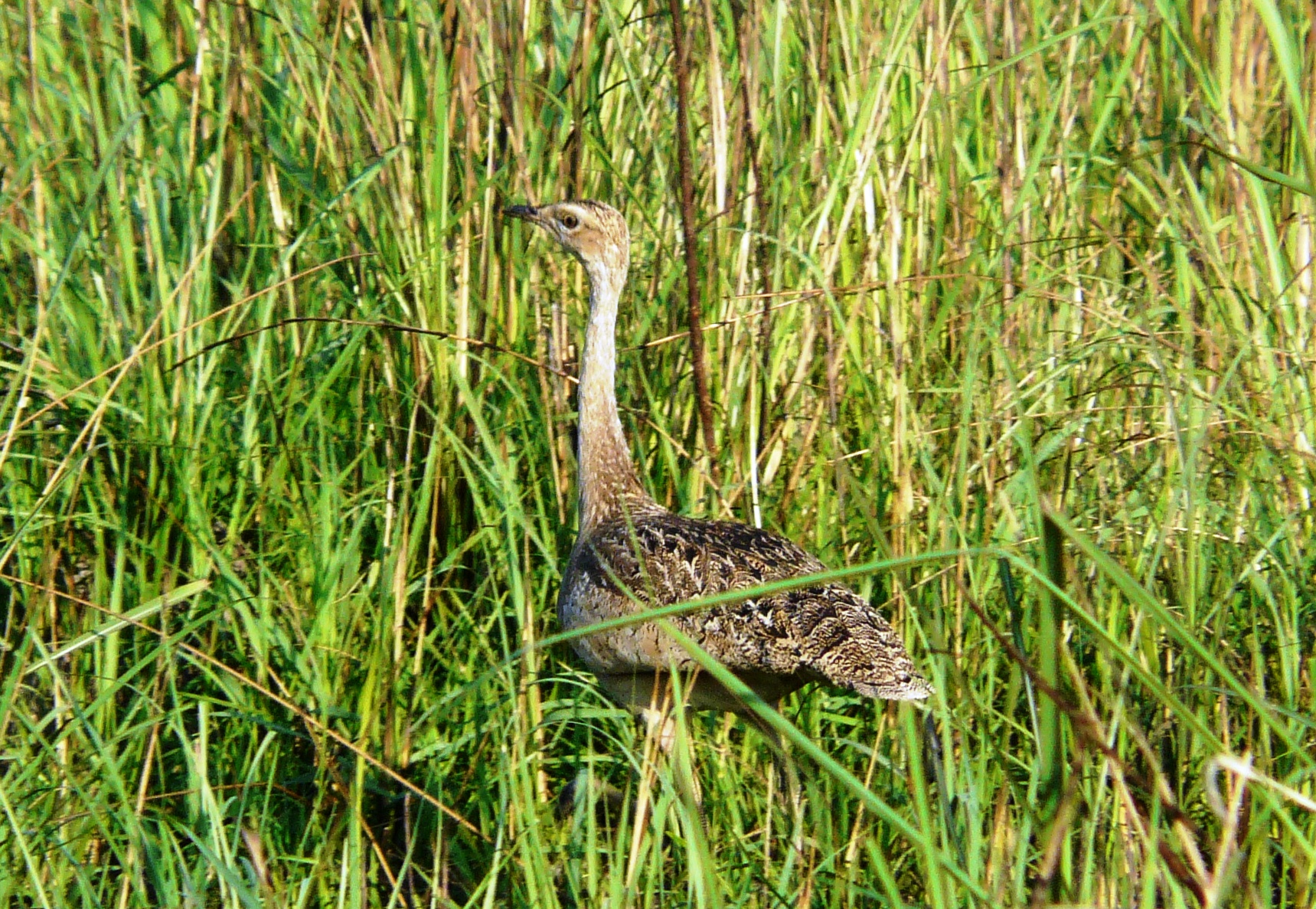 The male Bengal florican has black plumage on the head and neck, with largely white wings; but the female (pictured above) is buff-brown. Photo: Sonu Leeladhar

A team of biologists attach a satellite tracking device on a trapped bird. Photo: Dhritiman Mukherjee

In large grasslands in Manas and Kaziranga, 3-4 male territories are established, each male occupying its favourite spot. Females move from territory to territory, looking for the ideal mate. This is known as disperse lek system where many males display in an area while female(s) make mating choices. When a female visits a lek, every male tries to outsmart rival males by chasing her and show off by displays.

Once the female florican has mated, she selects an area away from male’s territory and lays one or two eggs on the ground in thick grass and incubates for 25 to 28 days. The males provide no care for the chicks.

We have no information on the breeding success, and what happens when the juvenile become independent. Where do they go? Do they remain in their natal area or disperse to new areas? In the old days, when the grassland habitat was widespread, there could have been a wider dispersal, but now with limited habitat left, we will not know the natural biology of the species. One thing is certain, adult males come back to the same territory year after year.

Satellite telemetry is a method where a small transmitter is harnessed to a bird or animal and its movement is transmitted to a satellite and received by a computer. In 2014-15, we caught four floricans in Pilibhit and Dudhwa in Uttar Pradesh and deployed satellite instruments. We found that the birds do not go very far from the breeding areas (maybe 20-50 km as the crow flies). 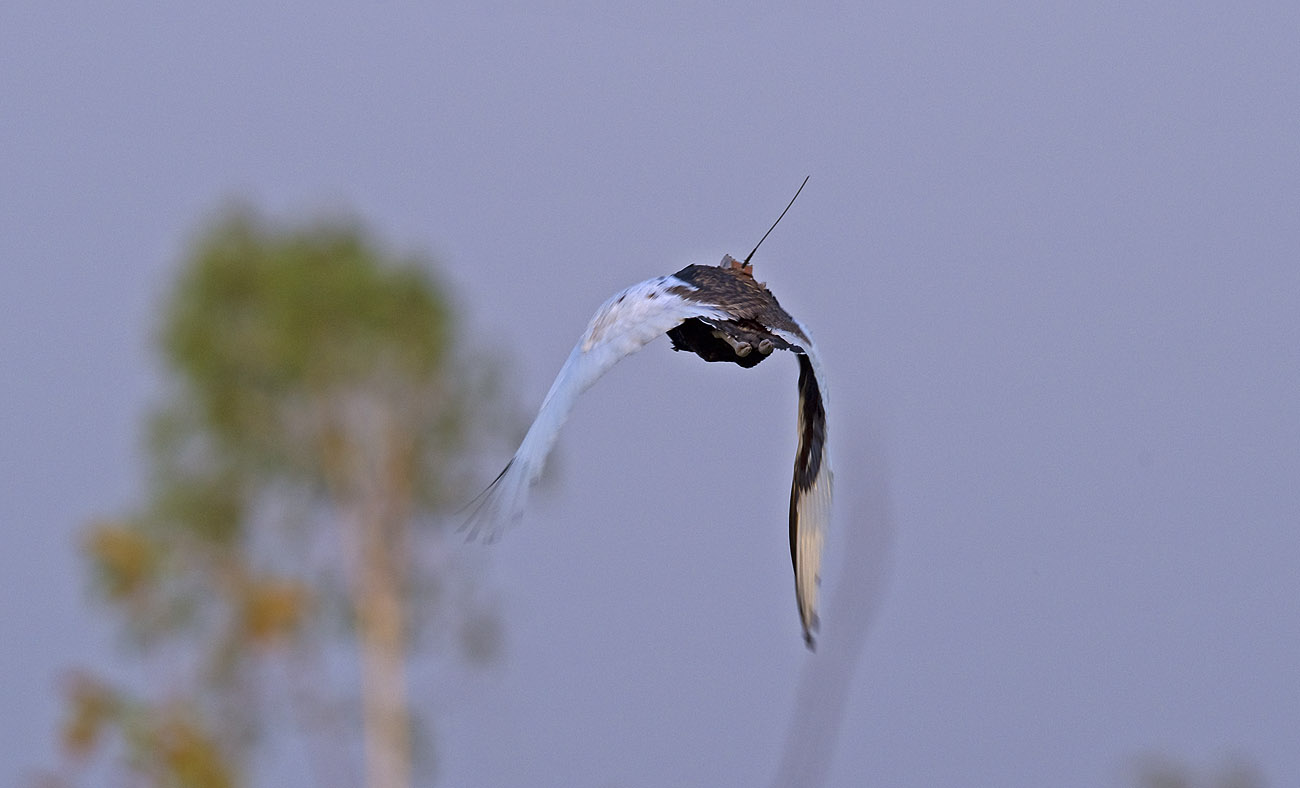 A male florican flies away with the satellite tracking device sticking out from its back. Conservationists who worked with the project claim that the device does not interfere with their flight. Photo: Dhritiman Mukherjee

Soon after the monsoon starts in July, grass in the terai becomes tall and dense, and unsuitable for these ground-loving birds to move around, so they move to crop fields to spend the next six or seven months. They have to face poachers, trappers, pesticides, and high-tension wires. No wonder the population of Bengal florican is decreasing fast. Perhaps not more than 600 to 700 survive in India and Nepal today.

At present we know very little about the biology, ecology, behaviour, breeding success, habitat utilization and dispersal of the Bengal florican. Without good knowledge of the species, it is not easy to suggest curative recommendations that can reverse the decline of this enigmatic bird.