Bengal Slow Loris: The Fiery-Eyed Wonder of the Night

The gum-eating, fiery-eyed primate is being wiped out by an illegal international pet trade

The beam of my headlamp slowly scanned the length and width of the foliage, until I brought it to an abrupt halt. Fiery-red eyes pierced through the leafy jumble. Although it was for two very different reasons, both my assistant and I were astounded. I was happy to meet one of the most fascinating creatures of the night. My assistant on the other hand looked like he’d seen a ghost, for such large fire-spewing eyes could only belong to something out of the ordinary, he reasoned. He wasn’t entirely wrong. 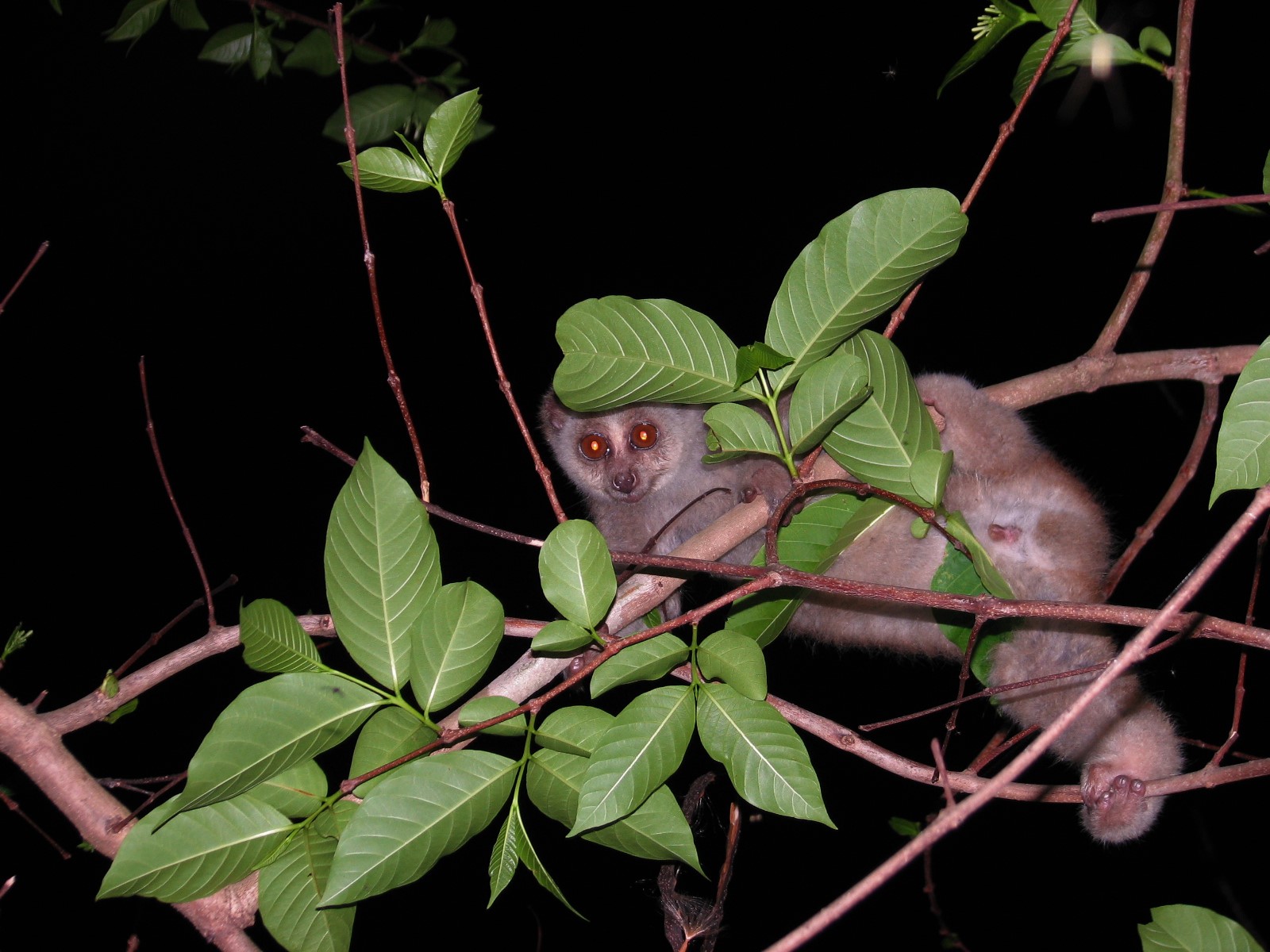 The Bengal slow loris is a little known, nocturnal, arboreal primate with a wide geographical distribution ranging from Northeast India in the west to parts of Vietnam in the east. In India they are known to occur in seven of the north-eastern states excluding Sikkim. Photo: Swapna Nelaballi

Bengal slow lorises (Nycticebus bengalensis) are anything but ordinary. Known as lajwanti banor, or ‘shy monkey’ in Bangla, they are anatomically and behaviourally peculiar. The English name ‘slow loris’ is a misnomer, conjuring images of a sloth-like existence. But watch them on their nightly run, and you’ll be surprised by their spry, silent movement while navigating and foraging in complex arboreal environments. 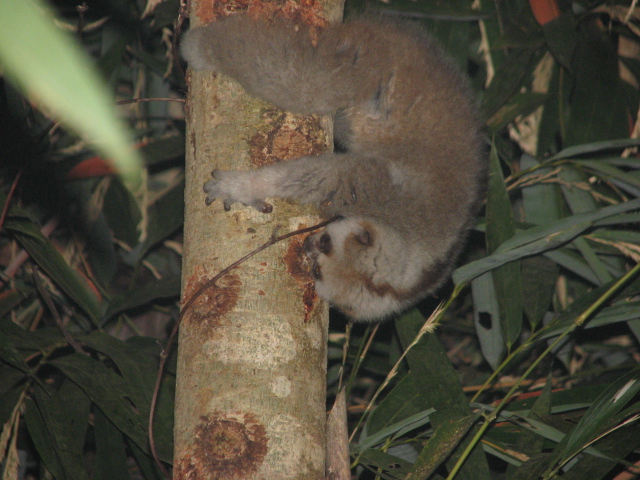 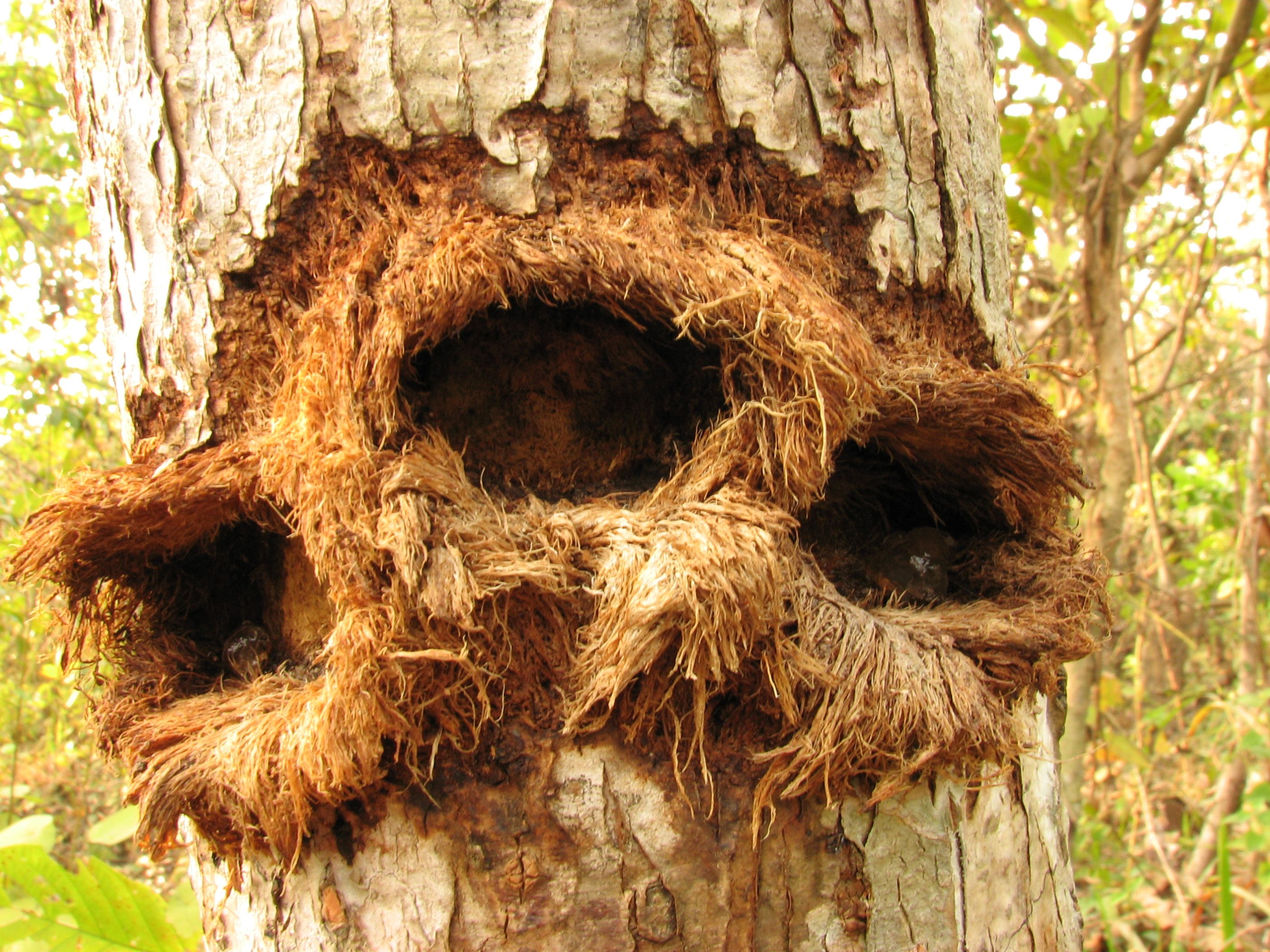 These nocturnal animals are known to follow the same routes to rich feeding sites, that are remembered and revisited night after night. At these feeding sites they skilfully harvest exudates, or fluids from trees such as sap and gum, by gouging large deep holes along branches and trunks. Photo: Swapna Nelaballi

Although they rarely descend to the ground, unlike many primates, they do not leap. They more than make up for this with locomotory capabilities unparalleled in the primate world. Adaptations to the backbone and long bones, extremely mobile wrists and ankles, accompanied by exceptional grasping hands and feet set slow lorises apart among primates. These unusual characteristics enable a large repertoire of movements and postures, which help them access the length and breadth of plants, tall and small. Slow lorises are seen actively moving along branches and trunks of all shapes and sizes, oriented at different angles; climbing, stretching, bridging, twisting and turning, frequently suspended in gravity-defying postures. At times, their movement is almost crafty in its deliberateness. At other times, they have the remarkable ability to maintain a static hold, upright or upside down, while clinging to tree trunks, sometimes wider than a metre. Arteries in their main limbs form vascular bundles, which maintain blood flow, and lower the temperature of their limbs, allowing them to uphold these static postures for extended periods of time — sometimes, close to an hour! 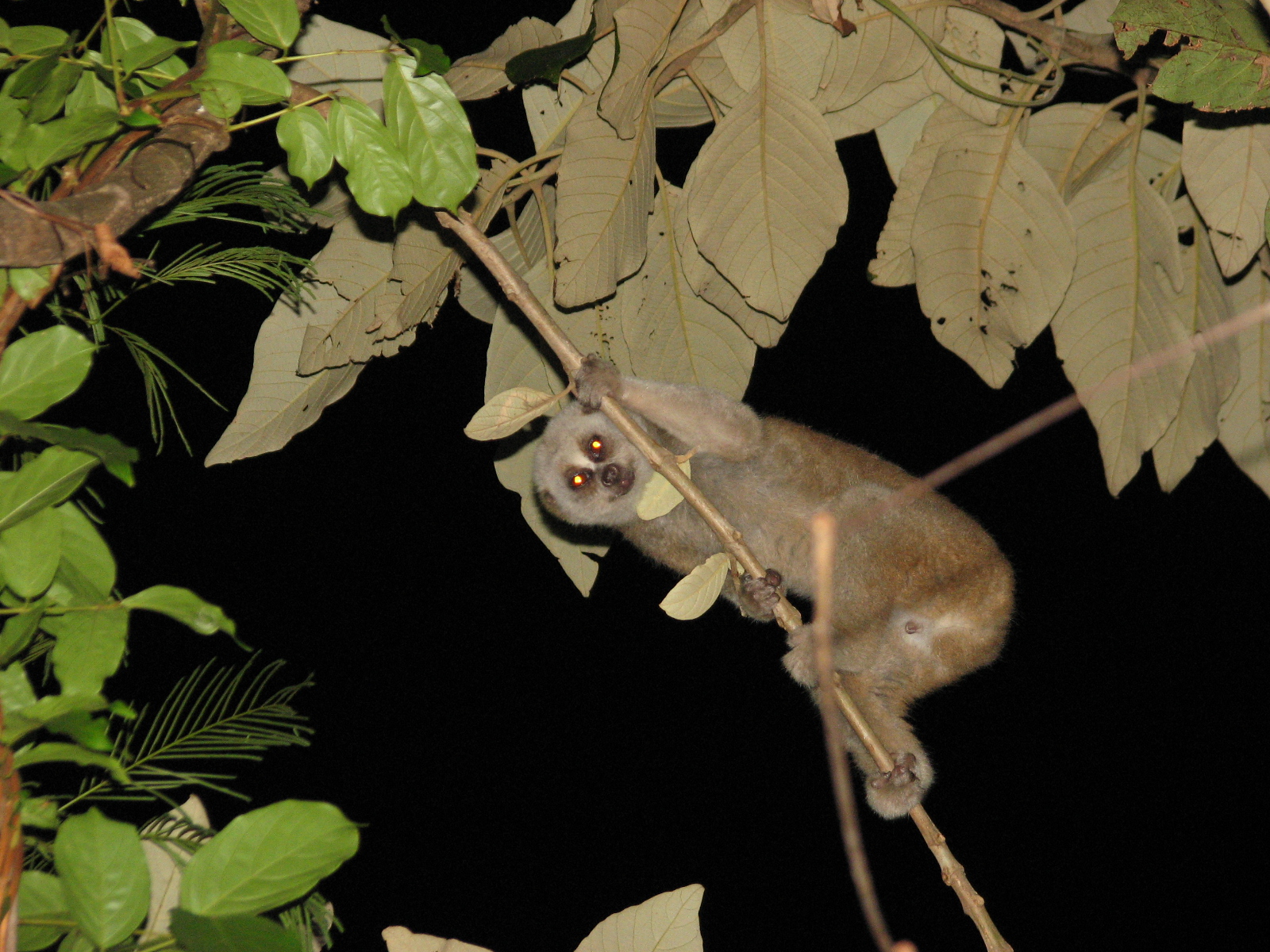 Bengal slow lorises are the largest among slow lorises, with adults weighing between 1000-2100 g. They have unique grasping hands and feet, and extremely mobile limb joints that allow for a firm, powerful grip and a large range of movements and postures, making them one of the most skilled climbers. Photo: Swapna Nelaballi

Such extreme adaptations facilitate access to a very special diet. For these skilled climbers, flowers and fruits located along fine terminal branches, or elsewhere on trees or lianas, offer no challenge. Stealthy movements, coupled with stereoscopic vision, help them visually track both quick-moving and relatively sedentary prey (mostly invertebrates) before grasping or pouncing with deadly precision, sometimes while maintaining balance on a shaky terminal branch. While fruits and insects, without doubt help them attain important micro- and macro-nutrients, they form only a small percentage of their overall diet.

Bengal slow lorises, like other slow loris species, are gummivores, i.e., they feed primarily on plant gums and sap. Although a commonly available resource, gum must be skilfully harvested, and the long chains of complex carbohydrates, often laced with toxic compounds, must be broken down for one to benefit from this energy-rich resource.

Slow lorises are capable of gouging hundreds of large, deep holes along branches and trunks, with incisors that are fused together into a tooth comb. Although lacking claws or keeled nails, the ability to hold static postures for long periods of time aids gouging behaviour, whilst clinging to tree trunks. Injuring trees this way elicits the secretion and collection of gum, which they scrape out with their tooth comb. Their long, narrow tongue helps lap up sap from deeper tree wounds. An enlarged caecum (a pouch-like structure at the beginning of the large intestine) helps them breakdown and extract energy from this complex, toxic food.

Not only do slow lorises tolerate extremely toxic compounds indigestible by most mammals, even fatal to some, they themselves are toxic. They can combine their saliva with a secretion from the brachial gland on their upper arm, to create a venomous concoction of complex chemicals. It is suggested that toxic compounds are sequestered from their food to supplement the venom. The exact function of this venom is still unclear, but it seems to serve as a protective measure against parasites, predators, and other slow lorises. Their toxic diet is also said to explain their reduced basal metabolism and notoriously slow reproductive rate. Among primates they have fewer offspring in their lifetime for their body size.

Their morphological characteristics not only enable a high degree of specialisation, but also allow for great flexibility. They are able to occupy a range of habitats, from rainforests, drier deciduous forests, montane forests to plantations and home gardens. In general, slow lorises, despite their small body size, are known to move long distances with overlapping ranges. They use vocal and olfactory communication, and are gregarious to varying degrees. It is time to discard the previously held notion that they are solitary rainforest creatures that scarcely move.

The flexible behaviour of the slow loris allows them to survive in a range of habitats. However, illegal pet trade and their rampant use in traditional medicines has led to local extinctions across their range. Today, their populations are seeing a steep decline and as a result, they are listed as ‘Vulnerable’ on the IUCN Red List. Photo: Swapna Nelaballi

While their morphological traits are fascinating, they have had unintended consequences. These large-eyed, tiny-tailed, small-bodied primates, considered one among the ‘cutest’ animals in the world, are unfortunately among the most sought-after pets. The once local illegal trade now occurs on an international scale, driven to an extent by their popularity on social media. Lorises are commonly packed by the dozen into unventilated bins and ferried to markets far and wide to meet an ever-increasing demand. Their specialised tooth combs and molars are inhumanely extracted without anaesthesia to make them more owner-friendly. An unknown number of animals die before they are traded. The few that survive are often housed in brightly lit spaces and provisioned with unsuitable diets for the rest of their life. This, and their rampant use in the medicinal trade, has led to local extinctions across their range. These extremely specialised primates are now becoming extremely rare.

There is still so much to learn about and from the extraordinary life of this primitive creature. What a pity it would be to lose this gum-eating wonder of the night forest, the world’s only venomous primate, with climbing skills that are the envy of seasoned rock climbers. The dark forests would just not be the same without those fiery eyes. 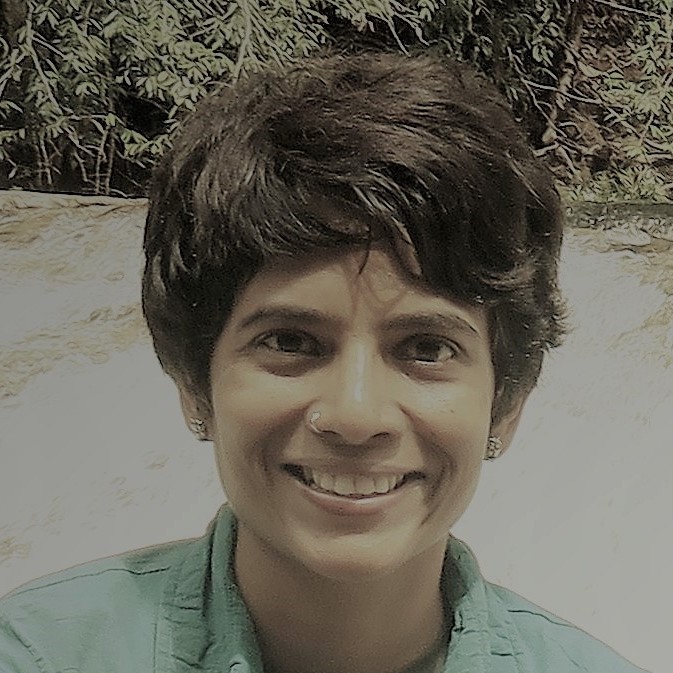 is a PhD student at the University of Michigan and studies interactions between fruiting trees and frugivores at the Gunung Palung National Park, Borneo, Indonesia.