Armed with a S-shaped neck and dagger-like bill, these herons are accomplished fishers 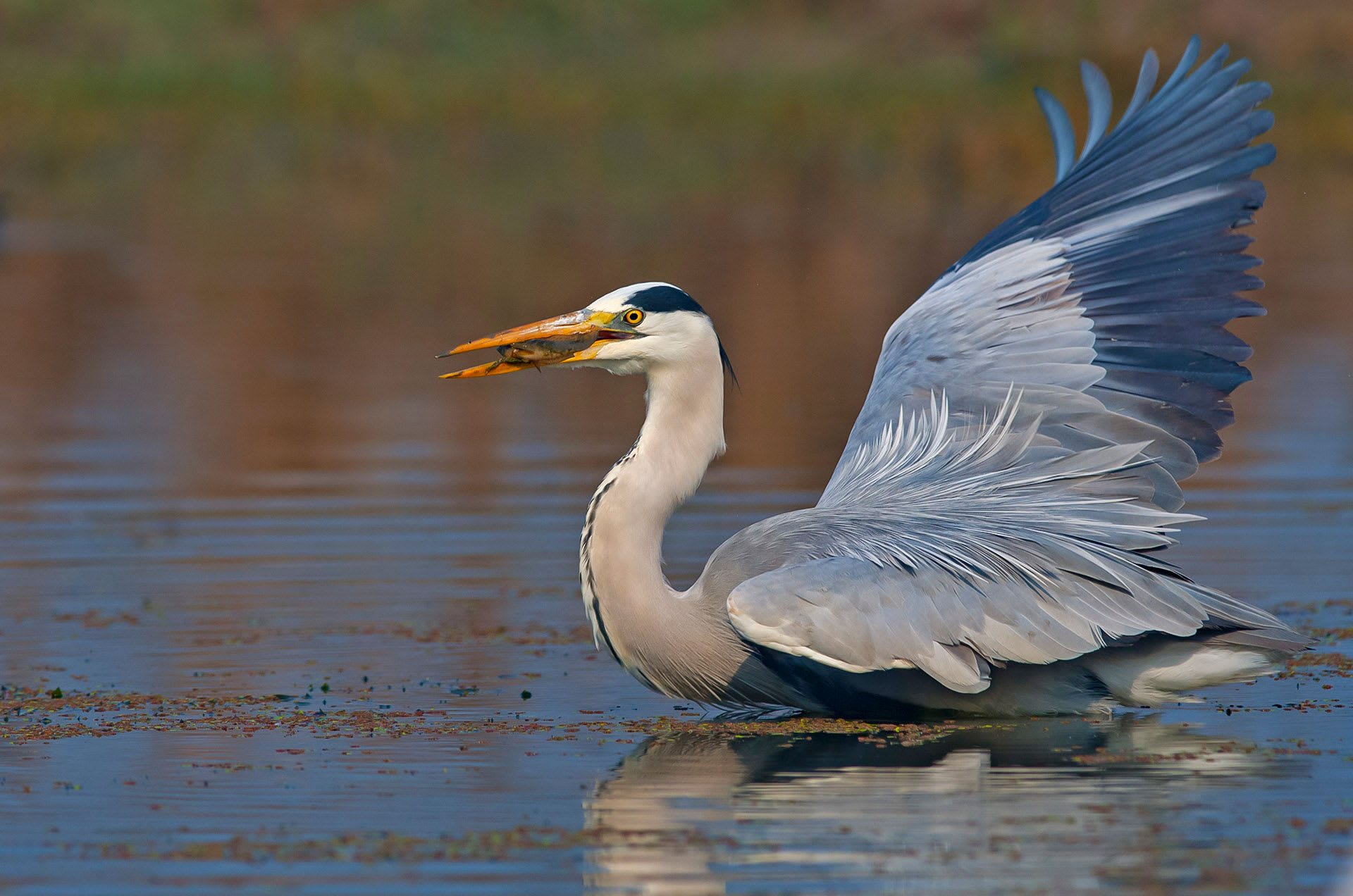 Herons belong to a large clan of over 60 species of non-swimming water-birds, big and small, nearly all of which are expert fishermen. And most are pretty grouchy — fixing you with a basilisk stare and then flying off with an irritable croak because you’ve apparently disturbed their fishing. In most cases, you hadn’t even spotted them, but then you tell them that!

As a clan, herons are usually found near water-bodies around the world — marshes, rivers, estuaries, lakes, the coasts, and even large garden ponds. For most, their diet is fish to which they may add frogs, crustaceans, even small reptiles, insects, and now what they can scavenge from our garbage dumps. They’re usually colonial nesters (Bharatpur in Rajasthan and Vedathangal in Tamil Nadu are famous for their heronries) with the northern birds breeding between July and October, and the southern ones, between November and March. They may build huge platform nests in trees, or nest on the ground. Do not disturb them at home — they’ll be sick all over you and as their diet is mainly fish, you will really stink! An easy way of recognising this family is that all of them fly with the heads folded back into their shoulders, forming a rough ‘Z’, with their legs and feet streaming behind them.

The grey heron can often be seen standing quietly at the edge of waterbodies with its neck hunched down as seen here at Jamnagar in Gujarat. Photo: Arindam Bhattacharya Cover photo: A long, S-shaped neck and dagger-like bill are characteristic features of a heron. The grey heron seen here with a catch mostly feeds on fish. Cover photo: Dhritiman Mukherjee

Now, just to ruffle their dour dignity a bit, I’ll let you into a little secret: many species of herons (as do some other birds) apply make-up! They have powder down feathers on parts of their bodies, on the breast, flanks and back — feathers which keep growing and disintegrating into a fine powder. This talcum is applied all over the rest of the plumage to rid it of fish-oil and other slimy stuff the heron picks up while fishing — and which could cause infection.

Among the big herons we will meet here, perhaps the best-known is the grey heron. Found all over the country, this crusty old fisherman is quite handsomely turned out (for someone out fishing) in a pale silvery-grey suit. The neck and crown are white and it has a snazzy antennae like thin black crest at the back of its head (called ‘occipital’ crest, because it starts from the occiput part of the head), which is raised when the bird is annoyed or excited. It also wears what looks like a tattered stole on its breast comprising black-streaked white feathers. It’s about 21/2 feet tall, but like most herons, has a dreadful posture, standing all hunched up, head tucked into shoulders. It’s armed with a formidable dagger bill — bright reddish-yellow in the breeding season and greenish-brown otherwise. 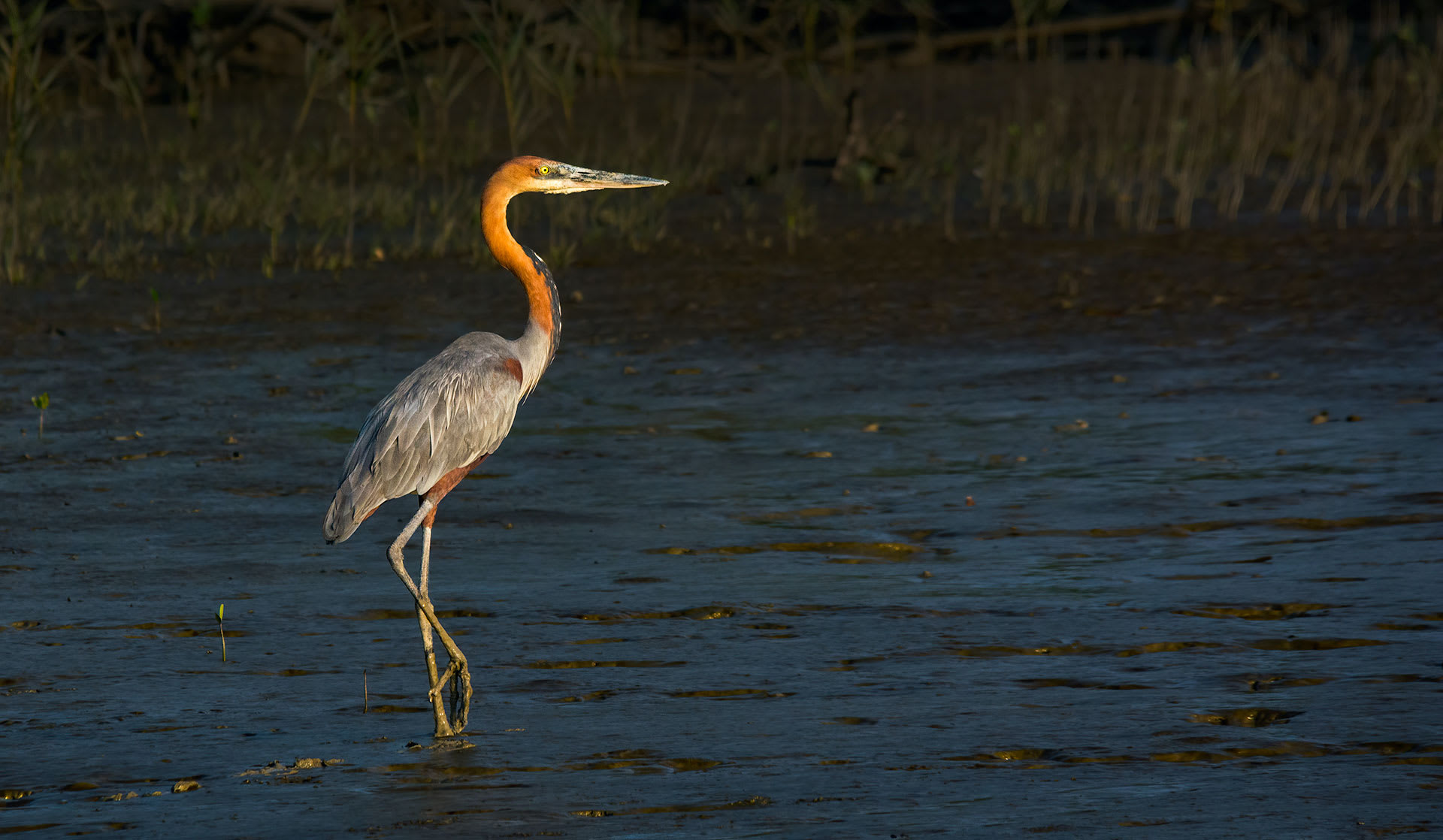 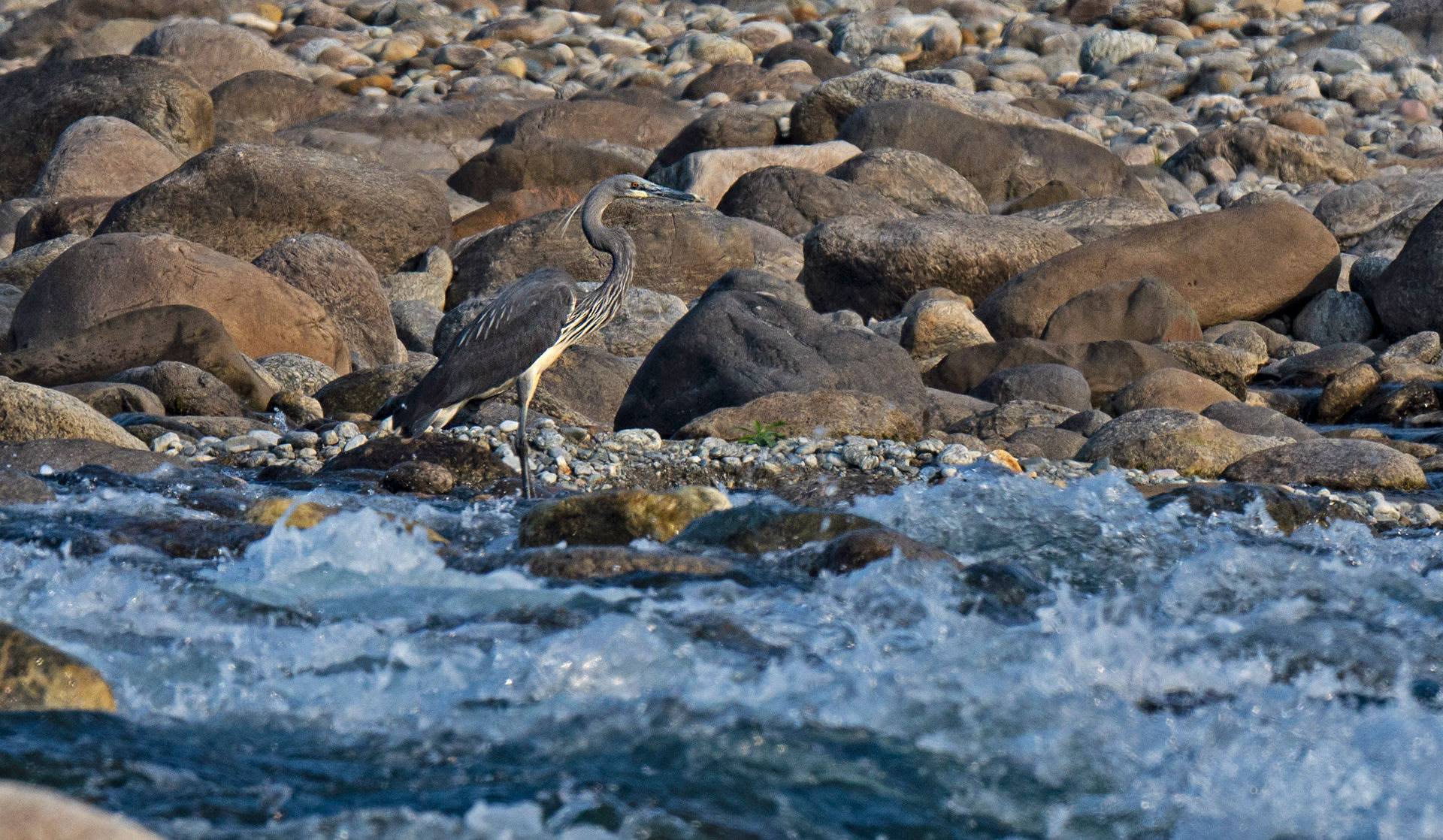 (Left) Standing around 1.5 m tall, the goliath heron is the world's biggest heron. It inhabits large rivers, marshes, estuaries, and mangroves such as the Sundarbans, where this heron was photographed.(Right) With less than 250 known individuals in the world, the white-bellied heron is the world’s rarest heron. The Namdapha National Park in Arunachal Pradesh, where this heron was photographed, holds a small population of these critically endangered birds. Photos: Abhishek Das (left), Dhritiman Mukherjee (right)

Like most good fishermen, the grey heron can stand stock-still for long periods of time. Standing in shallow water, eyes riveted to the surface, it’s a study in patience. Then, as a fish swims towards it, it might just move its head slightly from side-to-side. Its eyes narrow as it gets a fix on the prey and accounts for the refraction of light. The harpoon bill spears down and retracts, a struggling silver fish held firmly between the mandibles. The heron jerks its head upwards, straightens the fish and swallows it head-first. Else it might stalk its prey, lifting one spidery foot after the other with evil stealth before lunging. Sometimes it might stand in tummy-deep water and, when a target appears, do an undignified (for one so suited-booted) belly-flop after its prey.

Grey herons (at least) have a peculiar ritual before commencing with their breeding activities. I watched a group of 7 or 8 of them once in Bharatpur standing on top of trees near an old nesting colony, all facing the same direction, still and silent. This place is called the “standing ground”. Apparently, this puts them in the mood for romance, home-improvement and family-raising. Then the male stretches out his neck both horizontally and vertically, shows off his black crest, clatters his beak and honks — something which impresses the ladies. Both parents look after the three or four chicks that are hatched. 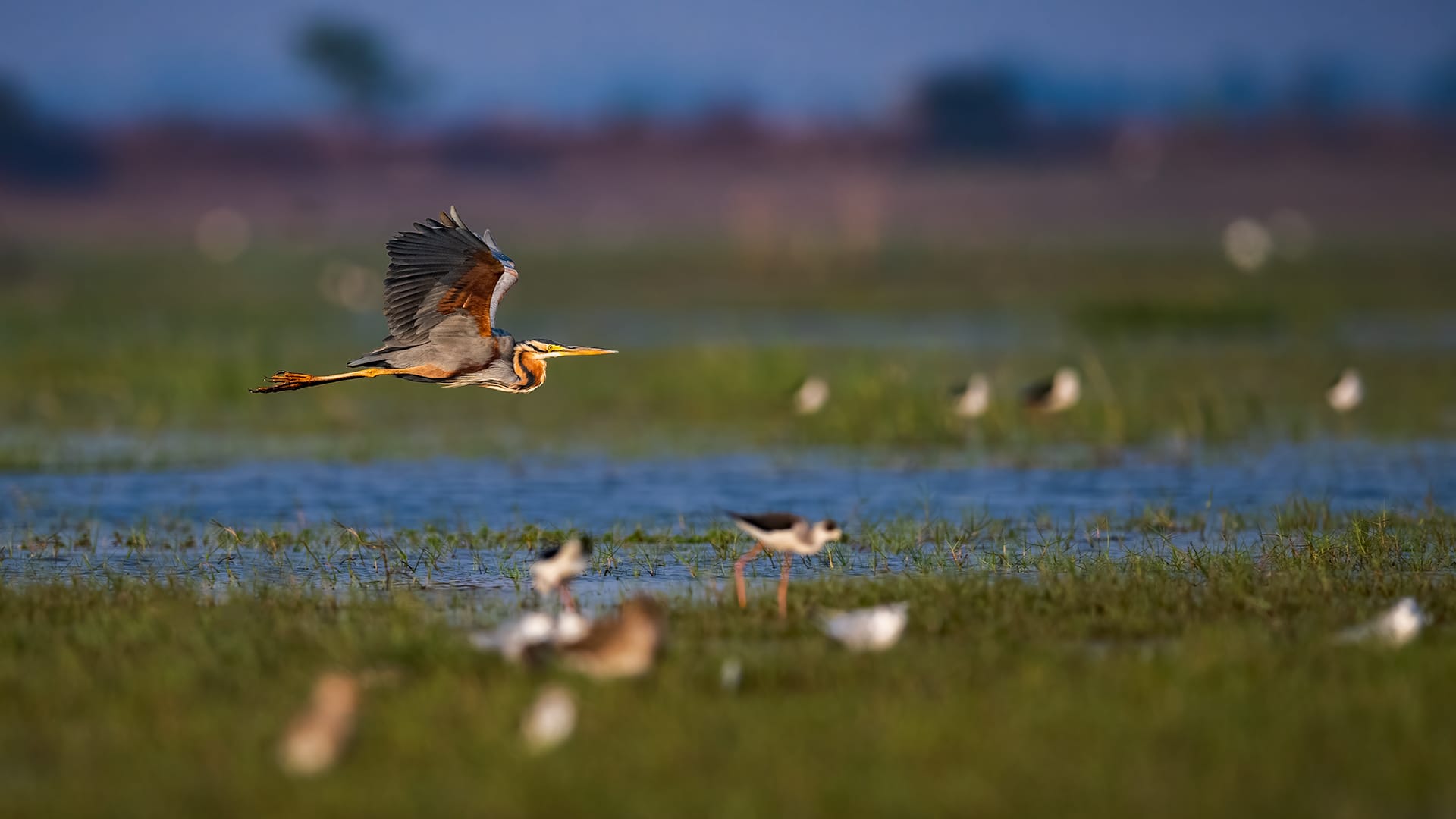 Herons pull their neck in during flight to form a bulge as displayed by this purple heron flying over the Mangalajodi wetlands in Odisha. The purple heron has a wingspan of around 130 to 150 cm and its legs extend a long way behind its tail in flight. Photo: Abhishek Das

The slightly smaller and slimmer purple heron is ethnically clad in resinous shades, mauves and streaky straw browns, which makes it difficult to spot among the reeds. It is shyer too, and takes flight quickly, the undersides of its wings a rich pine-resin shade. Purple herons love mucking around in squelchy marshes and so have longer toes than the others to help them move around. They nest at around the same time as the grey herons do, but prefer to do so in colonies exclusive to their species.

While both the above species are doing alright, the big white-bellied heron is in very dire trouble — with one estimate stating there could be just around 250 to 300 birds left worldwide, of which, just 50 may be in India. The world’s second largest heron, (the Goliath is the biggest) this charcoal grey bird, with its white streaked grey breast, prefers undisturbed water-bodies in the foothills of the eastern Himalayas, Bhutan and Myanmar. Development projects — such as dams, bridges and roadworks — and the like have caused birds to abandon their nests. A national survey discovered a breeding colony in the Namdapha Tiger Reserve in Arunachal Pradesh, but only six or seven birds were actually sighted over a fairly long period of time.

By nature, big herons are wary and will fly off, with an irritated ‘quaaaark’ at your approach. But it’s worth just watching them fly. They take-off with immense dignity and grace, beating their enormous wings with slow deliberation, their bodies gently rising and falling as if they were riding on invisible air-waves, their heads tucked well-back into their shoulders. When far away enough, they glide back down and land, spot-on, with nary a splash and then resume their fishing, which you so unnecessarily disturbed.