Black-necked Stork in the Eye of the Marsh

Tracking the black-necked stork over decades, it becomes apparent that this grand bird is territorial, needs a lot space, and resides only in large healthy marshland

I grew up reading Desmond Morris’s books. This British zoologist’s most famous title, The Naked Ape: A Zoologist’s Study of the Human Animal, on human sociobiology is still a bestseller 50 years after its publication in 1967. While reading his comparatively recent book on the human body that came out in 2008, I was struck by one sentence in the chapter, The Eye: “Having visible whites to the eyes is a uniquely human feature.” Is that so? The jungle babbler has white eyes (irises), so does the white-eye, a bird named after, what else but its white eyes. Celebrated scientists can go wrong sometimes.

When we say eye colour, we refer to the iris, the part encircling the central pupil which is always darker. Iris colour in birds varies from white to deep red, or sometimes even blue. In some birds, the iris is black. But why do some bird species have a different eye colour in the male and female? Take the case of the black-necked stork (Ephippiorhynchus asiaticus), one of the tallest Indian birds. The female has yellow irises while the male has red. I noticed this difference when I was studying this species in Keoladeo National Park, Bharatpur.

My association with the black-necked stork started by chance. Grasslands and wetlands are the two neglected habitats in India (and in the world), and they have always fascinated me, just like all other neglected species, ecosystems, habitats, communities, and cultures. What is the point of only parroting “jungle bachana hai” (“we must save the jungle”). Shouldn’t we also think beyond jungles? On my frequent visits to Keoladeo in the late 1970s and early 1980s, I realised that despite vast, throbbing marshes covering nearly nine sq. km there were only 5-6 pairs of black-necked storks, with each pair living 500-1,000 m from the other. I also saw frequent territorial fights between the pairs, each defending its territory and chasing away trespassers. In 1986, I conducted an extensive survey of the wetlands of Uttar Pradesh for the Asian Wetland Count, and kept a close watch-out for black-necked storks. I found that this large bird was found only in healthy natural marshes of more than 120 acres or more, and generally not found in small wetlands where other “plebeian” species may occur. Like a king, the grand bird needs a lot of space, where it can prey upon fish, frogs, aquatic snakes, snails, and other birds. In short, the black-necked stork is a symbol of a large, healthy marsh — just as the tiger is the symbol of a healthy forest. 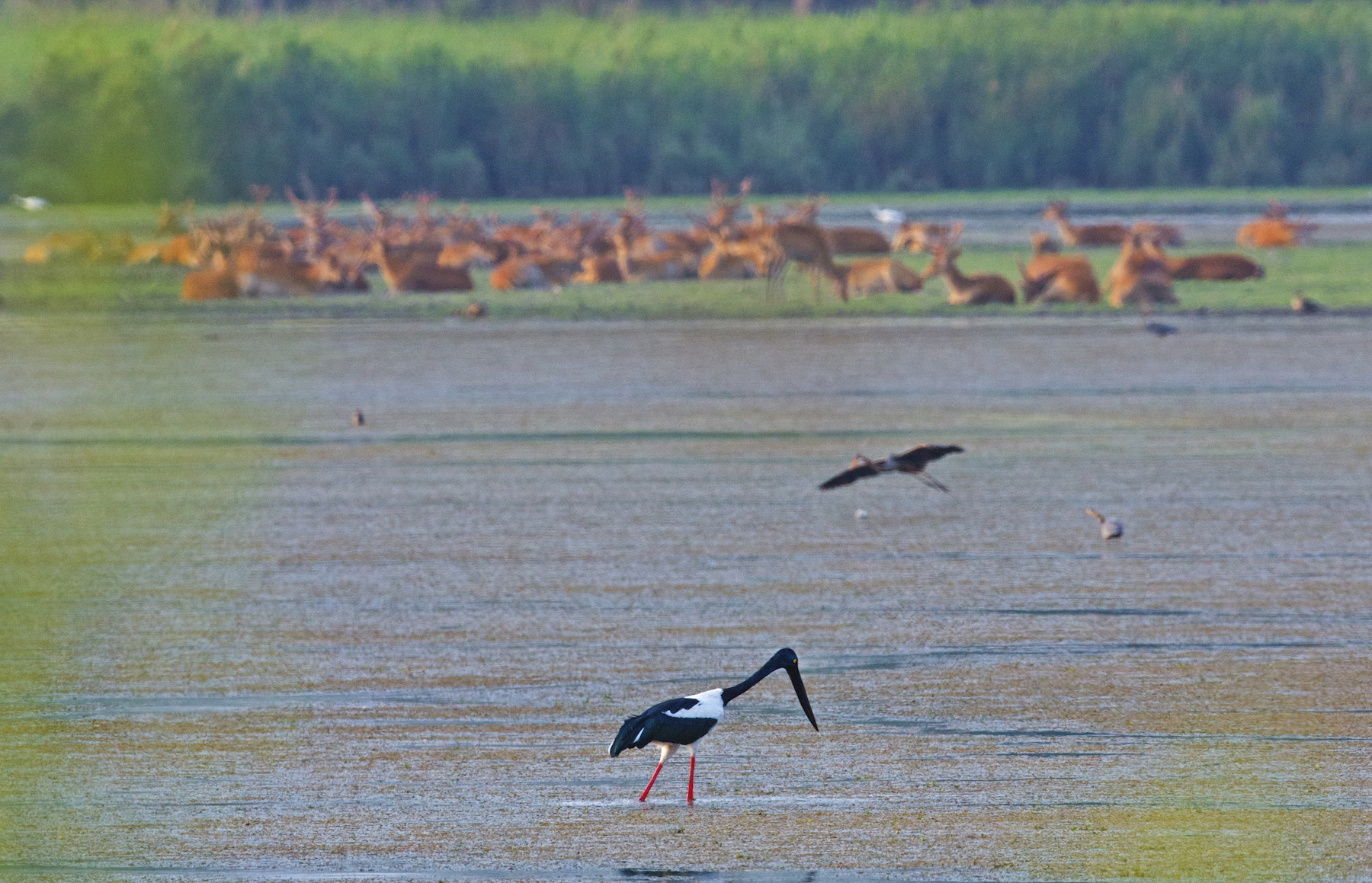 A black-necked stork walks around the marshy grasslands of Dudhwa National Park. Its strong legs allow it to move comfortably around the soft, unstable mud of wetlands when it is looking for prey. Photo: Dhritiman Mukherjee The black-necked stork is a large bird that is almost five feet tall and easily identified by its striking glossy peacock-green neck that appears black from distance, hence its name. Cover Photo: Dhritiman Mukherjee

I started collecting records of the black-necked stork, and in 1989 wrote a paper on its status and distribution in India, published in Forktail, a scientific journal of the Oriental Bird Club, UK. That paper created interest in the species and some of my students later studied the species both in Dudhwa National Park and Keoladeo.

The black-necked stork is widely but thinly distributed on the Indian subcontinent and parts of Southeast Asia, while disjunctive populations live in Papua New Guinea and northern Australia. We do not know whether the black-necked storks pair for life — most large birds do this — or only for a breeding season. What we do know is that when a pair is formed, it defends its territory, as it requires lots of food to raise its 3-4 young ones. The nest is built in a tall tree, generally near a marsh, but sometimes far away as well. Some nests are traditional and used repeatedly. For example, one nest near Khijidiya Bird Sanctuary, in Jamnagar, Gujarat has been in operation for the last 10 years of observation.

Thanks to its long legs, the black-necked stork can walk in deep marshes while looking for prey. It is not averse to eating anything, even an unwary common coot, or a pheasant-tailed jacana. Fish and aquatic snakes are particular targets, and the stork searches for them with slow, deliberate steps. Sudden bursts of movement indicate it is chasing prey. Once satiated, the bird sits on haunches for hours, digesting its hard-earned meal.

While foraging, a black-necked stork walks with its heads lowered, and its bill slightly open and trailing through the water, to scoop out prey. It also uses its sharp beak like a sword to pierce through the prey and tear it apart. Photo: Dhritiman Mukherjee

Coming back to the eye colour difference between male and female, some have surmised that as the bird is highly territorial, and the male wants to know the gender of an intruder from afar. Females are welcome, while adult males are not. However, if black-necked storks pair for life and live together as they often do, what use is this difference in the iris colour? We still do not have an answer.

The black-necked stork’s sexes are identical, unless you take a close look. The adult female has a yellow iris while the adult male has a red iris. Photo: Gopi Sundar

During summer, when most of the ephemeral jheels (marshy waterbodies) dry up, black-necked storks congregate in small numbers in the remaining marshes, but pairs maintain a discrete distance, as if maintaining personal space. My friend, Sanjay Kumar of the Indian Administrative Service, who is a fine conservationist, photographed 11 black-necked storks in the summer in Jhadi-Taal of Kishanpur Wildlife Sanctuary, Uttar Pradesh. This group included many juveniles, identified by their pale plumage (juveniles take two to three years to acquire adult plumage).

Destruction and deterioration of marsh and wetlands, overfishing, and pollution, have all decreased the habitat available to this majestic bird. In some areas, it is still caught for trading purposes, as it is a popular zoo exhibit. In recent years, zoos have become strict about where they purchase animals. Unfortunately, no zoo has made any serious attempt to breed the black-necked stork. At one time, there used to be 7-8 black-necked storks in the Lucknow zoo. Like other storks, it may not be difficult to breed black-necked stork in captivity.

However, the main effort must be to protect the natural wetlands from human overuse, so that birds like the black-necked stork can survive in the wild. We also need to monitor its population, to follow the way it lives, and to take effective and timely conservation measures. As this tall bird requires good wetlands with plenty of prey, its presence is one of the finest parameters to judge the health of a wetland. Indeed, I believe that symbolically the black-necked stork is the ‘tiger’ of the Indian marshes.