Buzz and Snap: A Gharial in the Bend of the River

This fish-eating crocodile, with a pot on its long snout, struggles for survival in the rivers of the Indian subcontinent 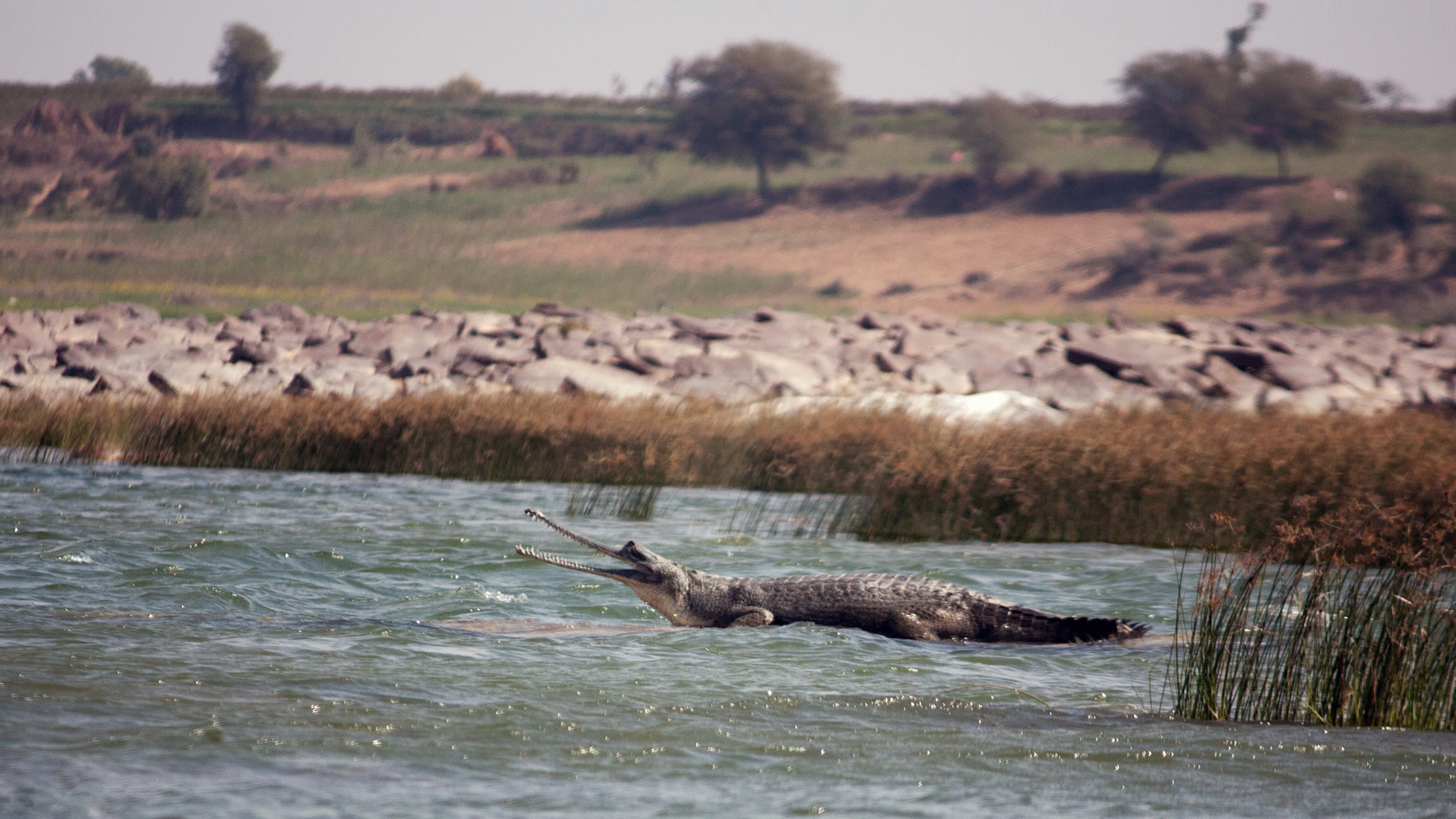 For millions of years, generations of a family called the Gavialis, lived on the Indian subcontinent. They were the rulers of the rivers, feared giants that smaller beings avoided. The Gavialis were river crocodiles, relatives of dinosaurs. Different species of the family were extraordinary in their own way, some were particularly enormous and others had unique jaws. As centuries passed, all the members of this ancient family slowly vanished, except gavialis gangeticus, better known as the gharials of the Indian subcontinent.

Once found in rivers all the way from Pakistan to Myanmar, gharials now exist only in the Chambal, Son, and Girwa Rivers in India, and in Nepal’s Narayani River. Although it is one of the largest crocodile species alive, sometimes growing up to 23 feet in length, gharials don’t follow the common stereotype of crocodiles hunting larger prey. Gharials mainly eat fish, and on special occasions, crustaceans and small birds.

Gharials venture onto land mostly to warm up in the sunshine, or to build nests and lay eggs. Photo: Suyash Katdare.

When male gharials reach adulthood, they develop a bulbous growth over their long narrow snouts—and this is what sets gharials apart from other crocodilian species. The name gharial comes from this growth, which resembles the ghara (earthen pot) made by local populations.

The ghara, a bulbous growth on an adult male gharial’s snout, can grow to the size of a coconut. Photo: Sandeep Varma

Another characteristic that makes the gharial distinctive in the crocodile world is its ability to produce a buzzing sound. All crocodiles hiss through their nostrils, but in the case of gharials, the gharais employed to create a buzzing sound to attract the female during courtship. They also buzz to ward off danger and establish territorial boundaries.

Gharials snap their jaws in a peculiar jaw-clap, both over and underwater. They open their mouths wide open and snap them shut with a resounding force, to warn off other gharials or to stun fish.

Gharials are an endangered species, they are now only found in a few areasof Northern India and Nepal. Photo: Suyash Katdare

Gharials are critically endangered crocodiles. Thanks to the notoriety of the dacoits of the Chambal, an area where the famous bandit queen PhoolanDevi once reigned, the animals managed to live undisturbed for decades. With people avoiding the Chambal for many years, fishing and development activity were non-existent, allowing the gharials to flourish. As a result of the unintentional protection they received from the 1960s to 1990s, the Chambal River still remains the location with the highest concentration of these creatures.

With just under 400 adult gharials left in the wild, numerous conservation efforts are underway to protect them. Most of the Chambal River has been declared a riverine sanctuary, the first of its kind in India. Gharials are now listed under Schedule I of the Indian Wildlife (Protection) Act, which provides them the highest level of protection.

The most unique feature of this crocodile species is its long, slender snout, perfect for fishing in freshwater. Photo: Suyash Katdare

Their size may be impressive and their snouts appear menacing, but we need not fear the gharial. They are quite shy and wary of humans. With their thin, delicate jaws, gharials are unable to bite any large creatures. If you do find yourself face-to-face with one, the reptile is likely to be far more worried than you.

The best places to spot the gharial in its natural habitat is in the National Chambal Sanctuary in Uttar Pradesh, India and Chitwan National Park in Nepal. Jim Corbett National Park and Katarniaghat Wildlife Sanctuary in India are also recommended, though they have much smaller numbers.