The turtle has been shrouded in mystery for too long — it is rarely spotted, we know little about its ecology, except that its numbers are declining across its range 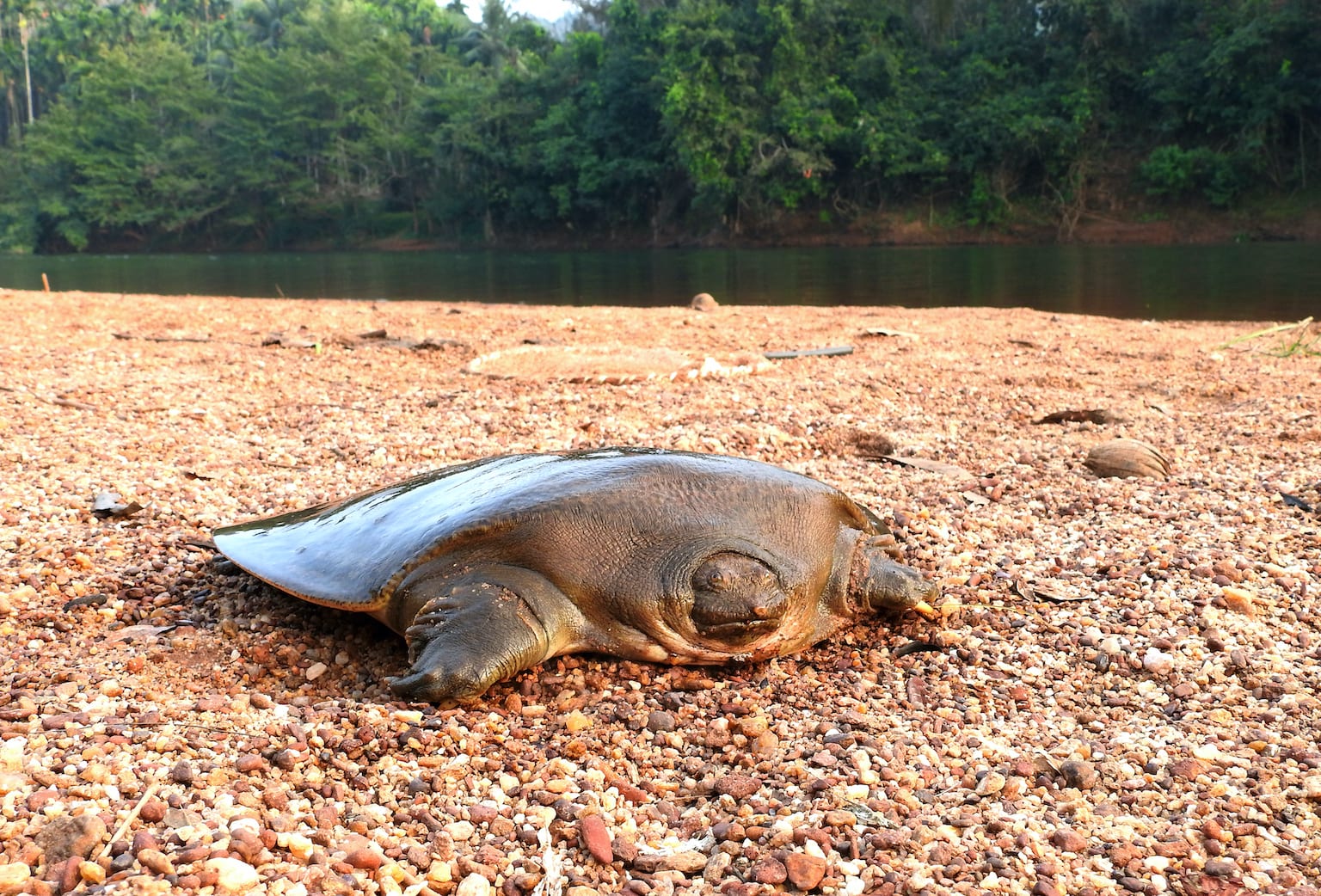 “What if I don’t find the turtle in these two years? What will become of my project?” I asked Cassandra Murray, former EDGE (Evolutionary Distinct and Globally Endangered) social dimensions specialist. EDGE of Existence is a global conservation initiative that focuses on threatened species that represent a significant amount of unique evolutionary history. I had been able to get the support of EDGE to draw attention to a little known unique, softshell turtle. She looked at me, confused, and said, “Your project is not about finding the turtle, it’s about linking the community to the turtle and initiating a conservation dialogue.” Clearly, I was getting ahead of myself. Her words stayed with me through the completion of my project. However, my keenness to see the turtle never waned.

The next three months and a 30-page project plan later, all that was left was for me to put on my hiking boots and take off. I was determined to understand whether this giant turtle was still traversing the rivers of Kerala. We knew fully well that the turtle we were looking for was largely a mystery to the scientific community. With almost no knowledge of the natural history, presence, or ecology of the species, our only clue was a report by a Calicut-based scientist that the Cantor’s giant softshell turtle was last sighted by a fisherman in an estuarine habitat in Kerala nine years ago. 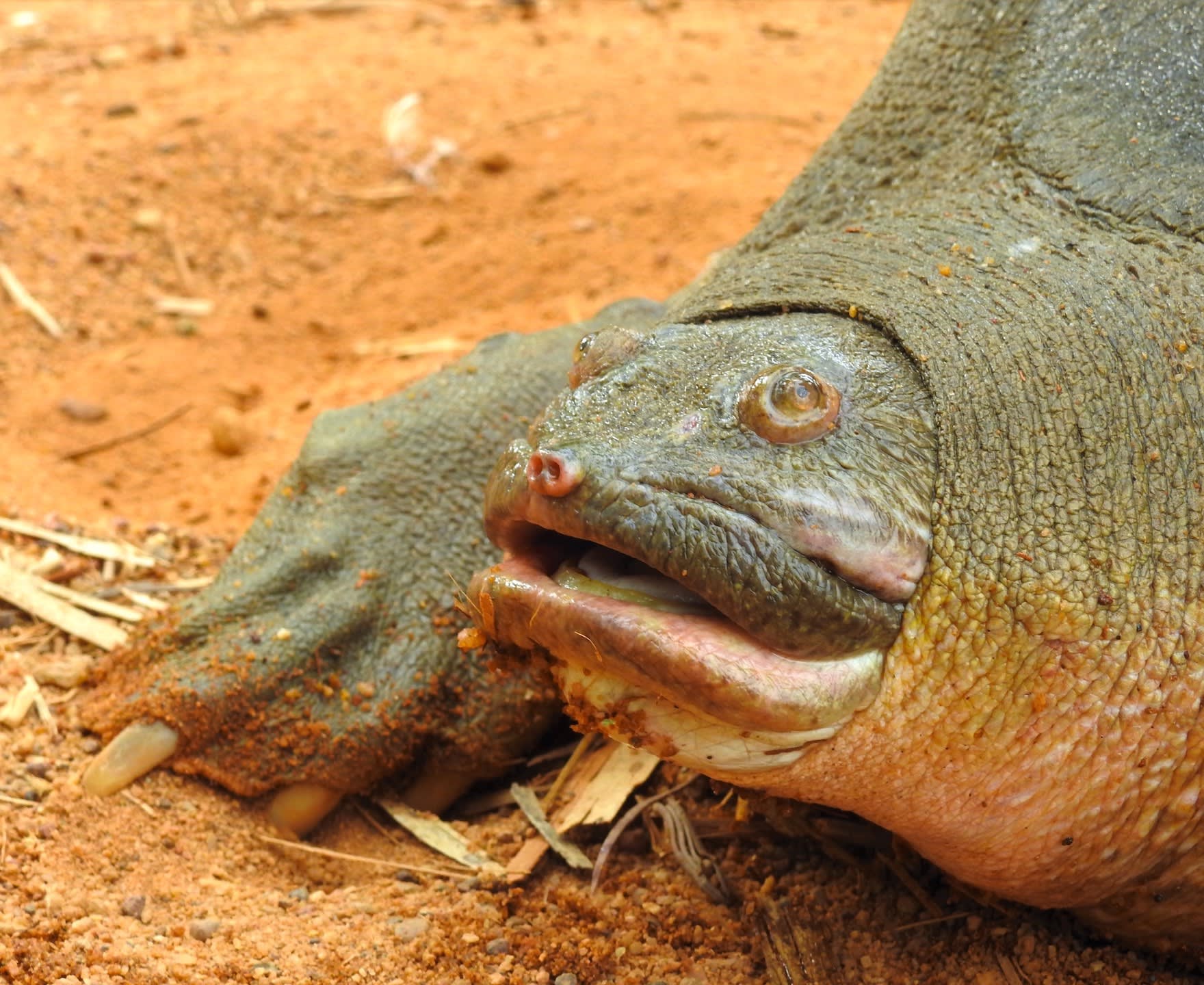 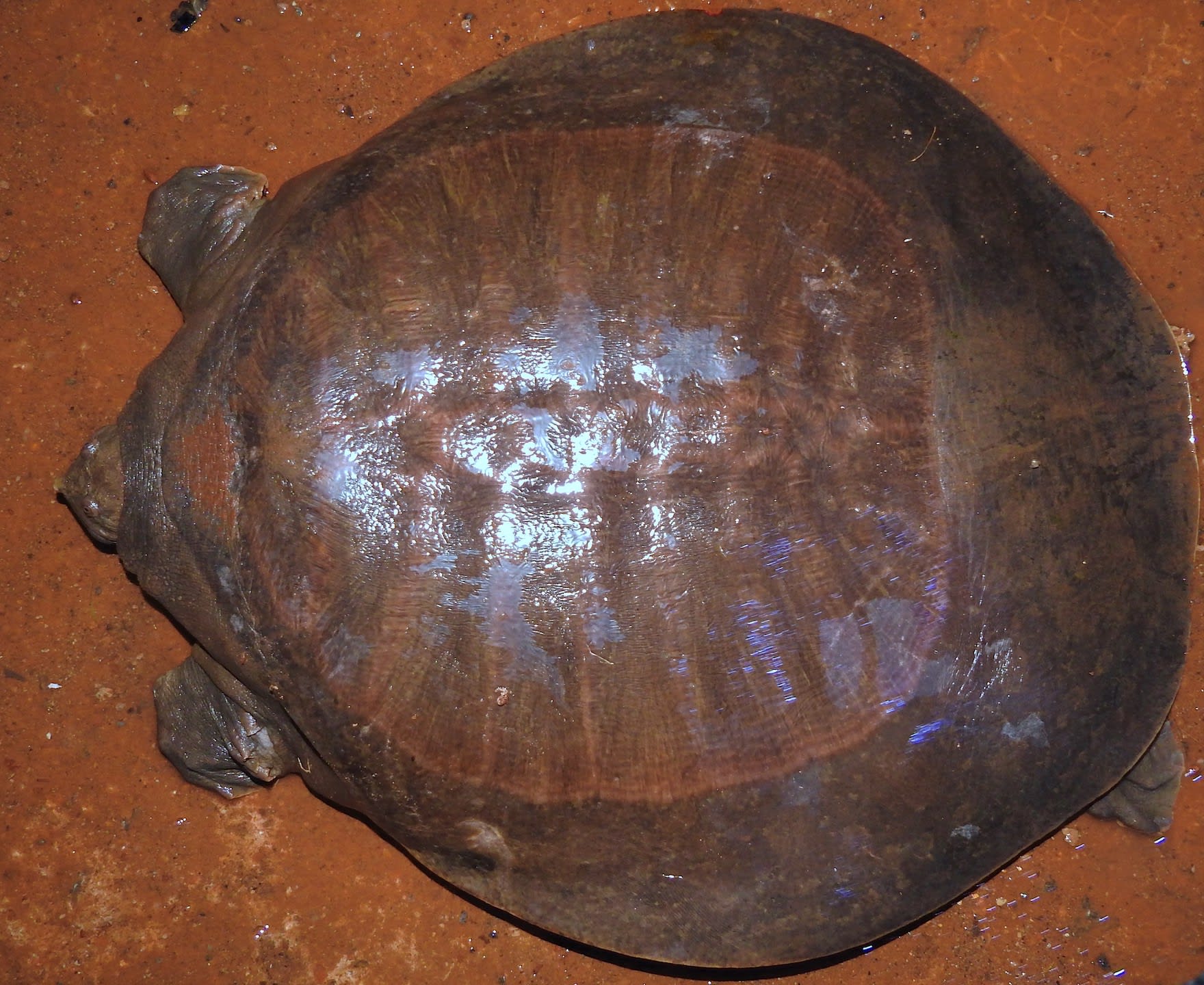 (Left): “Teeth” are absent in modern day turtles; softshell turtles instead have sharp hooked beaks which allow them to feed on carcasses and kill small prey. (Right): The adult females of Cantor’s giant softshell turtle or the Pelochelys cantorii are identified by their large size and relatively shorter tails. Photos: Ayushi Jain (left), Akshay Anand (right)

Our initial attempts to build a network with the local communities were met with success seven months later and I was informed that a “large turtle” was spotted in a deep, isolated pool of a river in Kasaragod. I immediately packed my bags to travel overnight in the hope of catching a glimpse of the turtle. People living in the adjoining areas knew this large turtle by its regional name “paala poovan”. They had been seeing the turtle for years in this river, however the sightings were reported to be as low as once or twice in a year.

The first day of visual scanning the deep pool area was unrewarding. The next day, I followed the same routine of sitting by the bank with binoculars in one hand and camera in the other. I was accompanied by a few people from the village including children. The children were mostly just curious onlookers. After four hours of uninterrupted scanning, all of us were beginning to lose hope. Then, all of a sudden, we suddenly saw a large snorkel-like head. The kids pointed, yelling “paala poovan”, excitedly. After a few more sightings, I had better photographs too. The children were right. It was indeed the “paala poovan” or the Cantor’s giant softshell turtle.

These turtles are highly secretive animals. They spend most of their life buried in the riverbed waiting for their prey to swim by. The eyes present on the top of their head allows them to detect their prey while they remain hidden in the sand substrate. This behaviour also makes them highly specialised ambush predators in the riverine system. From my personal experience, I can vouch for the fact that the species is known for its aggressive behaviour, a lightning speed strike and a powerful jaw. Two of my community informants who have had close encounters with the turtle when it was accidentally caught in fishing nets go as far as saying that it is capable of biting a finger off. 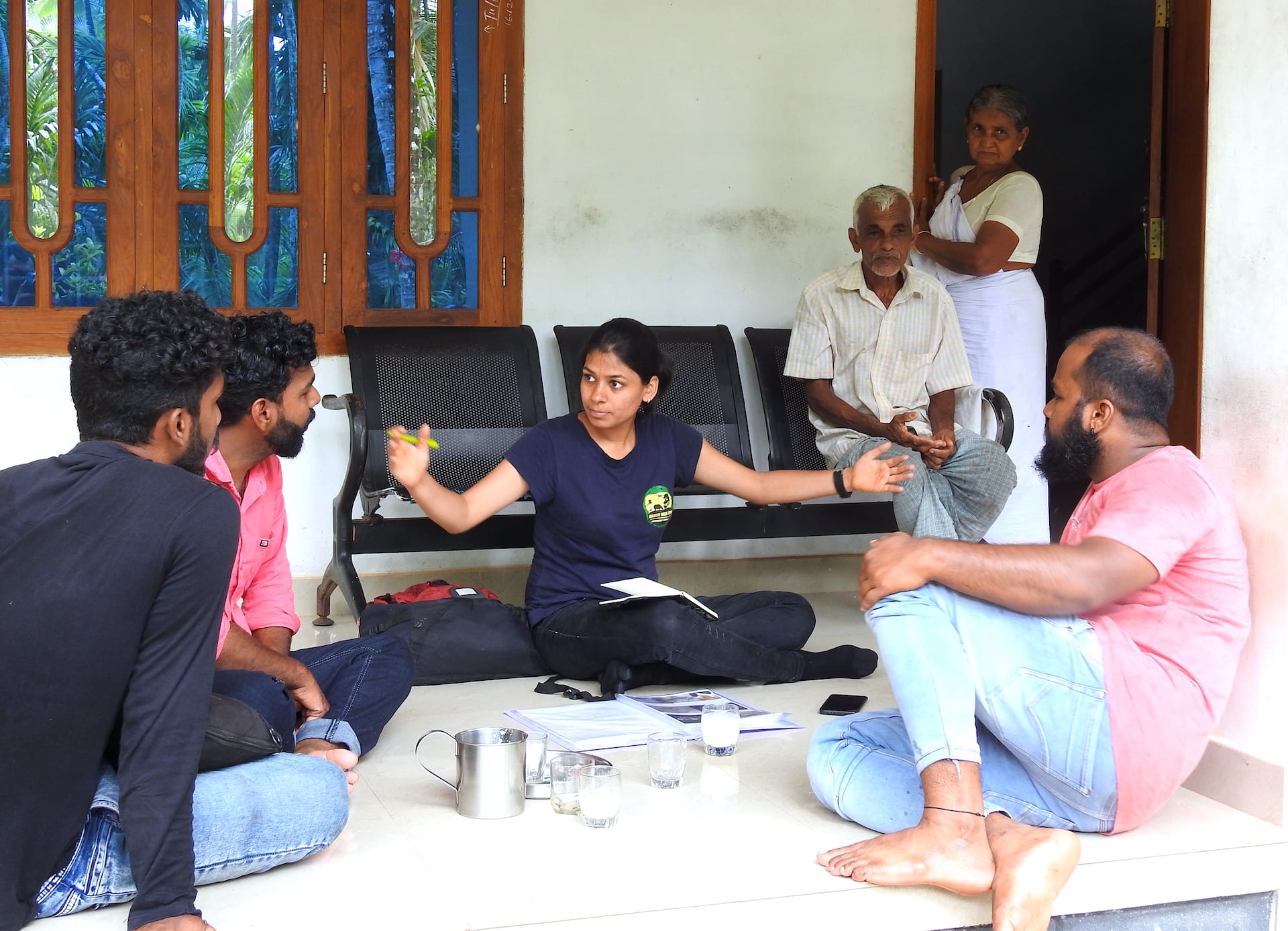 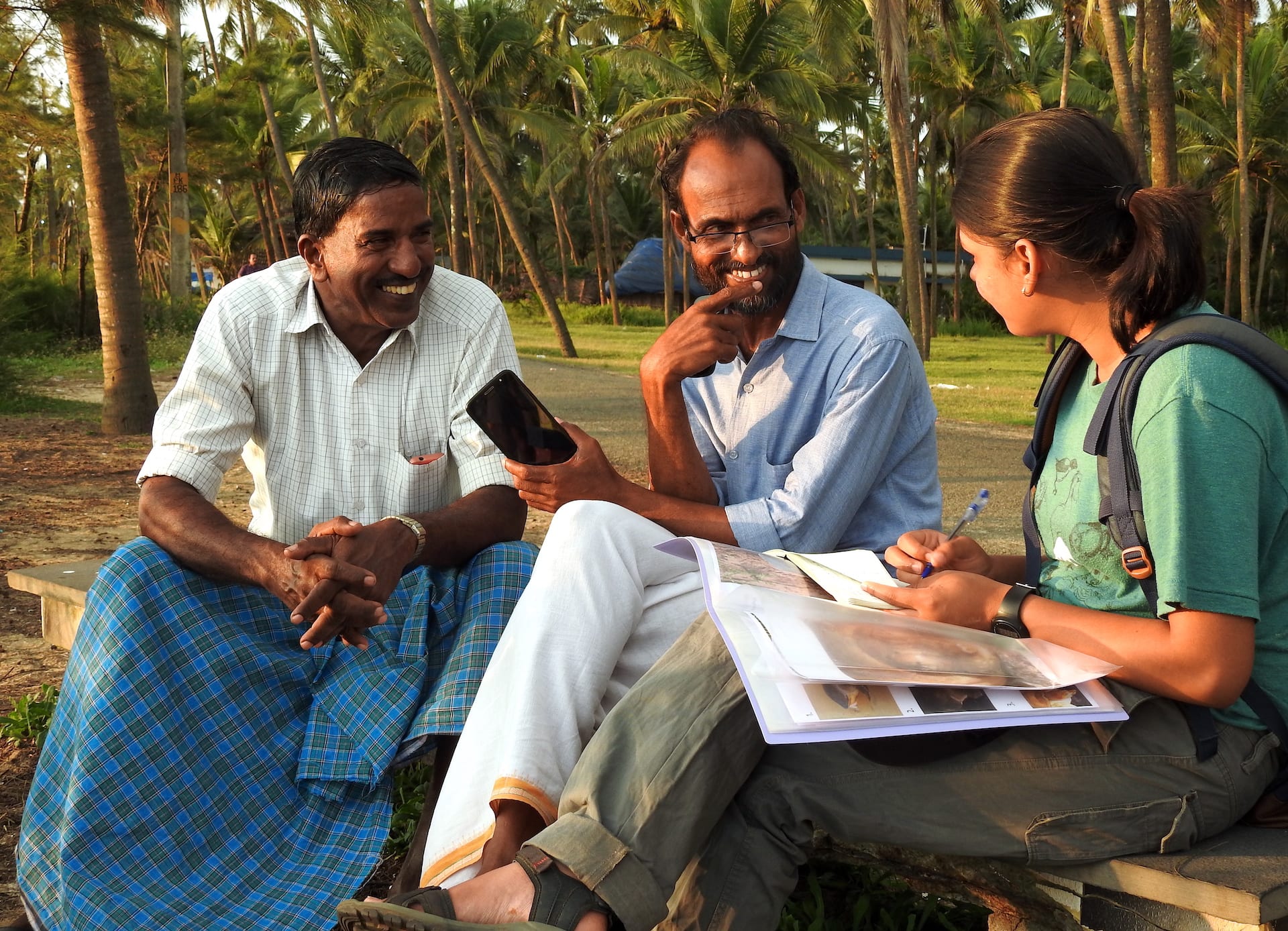 (Left): Conversations with community members, who later become informants are very critical to the conservation process. (Right): The author surveys locals from previously known locations of P. cantorii to understand the historical occurrence of the species in Kerala. Photos: Akshay Anand

This highly threatened species often gets caught in fishing gears. Once caught it is, more often than not, killed for food. In uncommon events, when it is released back into the river, the fishermen generally just cut the fishing line and leave the hook inside the turtle. This can be fatal in a majority of cases. Activities like unregulated and illegal sand mining and construction of illegal dams and check dams without impact assessments pose an immediate danger to the species. They end up irrevocably damaging the foraging and nesting grounds of the turtles along the riverbeds. In addition, the increasing pressures on the river for irrigation to cater to the expanding industry of agriculture and plantation further alters the habitat. This habitat alteration and destruction is causing a severe decline of the already dwindling populations of this turtle across its range.

The turtle has been long overlooked by the scientific and conservation communities, despite its large distribution range across Southeast Asia. Its populations across 11 countries are severely fragmented with next to no information on the population size in any of the countries it is known to be found in. Anecdotal observations have provided information on the species distribution in the country to some extent, however, such reports are rare and scientists believe that the species population continues to decline all across its range. Some evidence also says that the species might actually be locally extinct in some places. Even though it is categorised as a freshwater species, reports suggest that Cantor’s giant softshell is among the few freshwater species that have a tolerance for estuarine and marine habitats. Why it enters the sea is still unknown, however, some are of the opinion that the species probably moves to the sea beaches to nest. 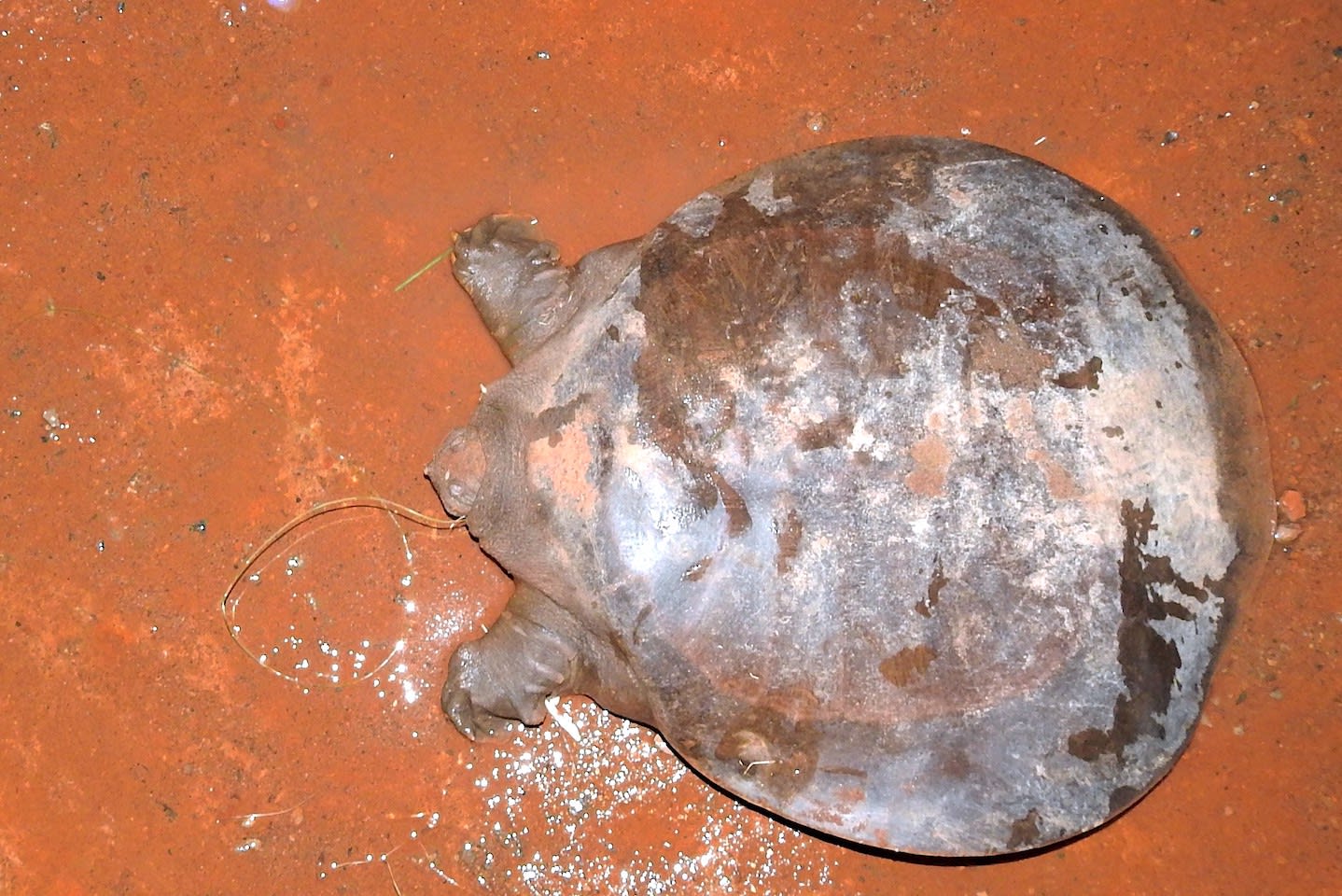 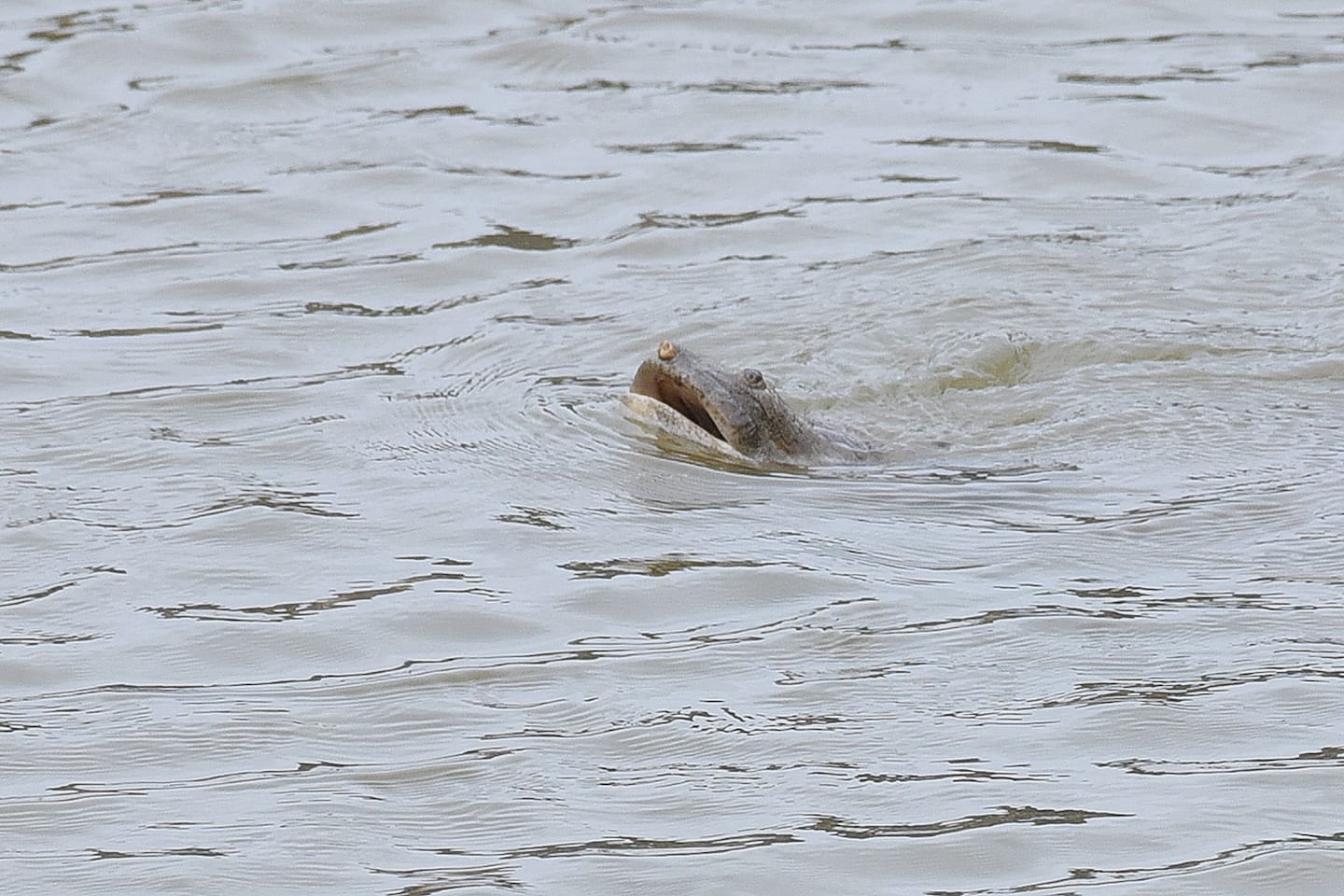 A large part of our efforts in conserving this rare species from becoming extinct revolves around sensitising local communities and involving them in the conservation process. With the support from ZSL EDGE of Existence, National Geographic PhotoArk and MBZ Species Conservation Fund, I have initiated a community-centric conservation plan. An alert network of people now play a key role in not only reporting incidents of by-catches, but also sightings of the turtle. They also play leadership roles by involving more members of their community and become spokespersons for the species. Another important step has been to the bridge the gap between the members of local communities and the forest department. The training of the community members in safe handling of large softshells and reporting the by-catches or other significant development by the Kerala forest department has been very successful. So far, our efforts have resulted in the rescue and safe release of four individual by-catches and frequent calls with reports of sightings, which has helped in identifying critical habitats for the conservation of the species.

Our hope that this species will survive and eventually thrive, goes up with every piece we add to the puzzle. Demystifying this understudied enigmatic turtle together is essential for its wellbeing. 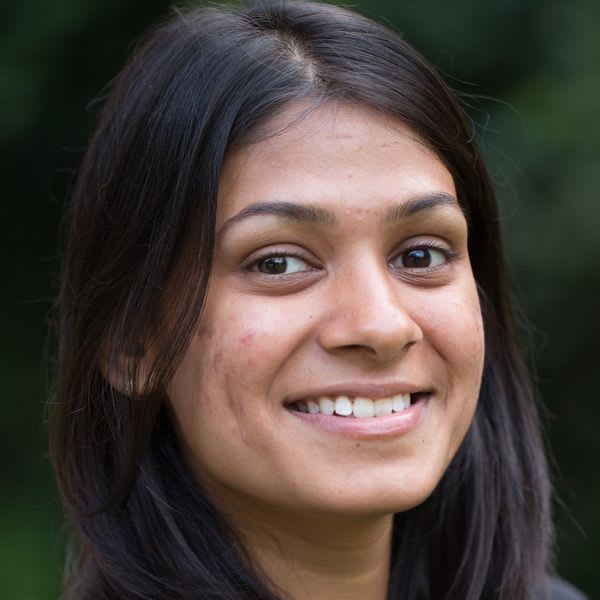 is a National Geographic PhotoArk EDGE Fellow and a turtle biologist working towards the conservation of the Cantor’s giant softshell turtle in Kerala.