Catch a Spot of Iridescence When a Gaudy Baron Flits By

Amidst the whoops and calls of apes, the beatific gaudy baron butterfly is the perfect distraction

Whooping calls reverberated through the forest as we watched a troop of western hoolock gibbons in the Hollongapar Gibbon Sanctuary in Assam’s Jorhat District. Observing the gibbons swinging their way through the jungle was fascinating. I had visited the sanctuary, sometimes known by its old name, the Gibbon Wildlife Sanctuary, primarily to see butterflies. But a glimpse of gibbons, India’s only ape species, was very much on the agenda as well. The small population of the IUCN-listed endangered apes here makes for good watching and photography, but I felt sad at their plight. They live in a small 21-sq-km sanctuary area, isolated from their brethren in other parts of their range.

Even as I gloomily mulled over the impact of human-created habitat fragmentation on these gorgeous apes, a flash of colour startled me out of my reverie. A male gaudy baron (Euthalia lubentina) had decided that it was time to cheer me up. The gaudy baron is a beautiful member of the Nymphalidae family of butterflies, also known as brush-footed butterflies. While most butterflies have three pairs of legs (as do most insects), the fore legs of brush-footed butterflies are reduced to a brush-like appendage.

The gaudy baron is at its most brilliant when it is sitting on a leaf, basking with its wings open. Sayan Sanyal — CC BY-SA 4.0

Many people often ask me about the common names of butterflies, and on many occasions, I do not have answers for them. Why is an emperor or a nawab butterfly called so? It’s not easy to answer. However, in the case of the gaudy baron, I get no such queries. The gaudy green colouration of this butterfly, spotted with red, black and white is answer enough. Another query that often comes my way is how I can tell sexes of butterflies apart. Many butterfly species are sexually dimorphic, which means that the male and female differ significantly in colour and markings. This is not so in the case of the gaudy baron, but the female gaudy baron has a white band of spots on its forewings, which the male lacks; hence it is easy to tell them apart, even in flight.

A gaudy baron mud-puddling, i.e. getting the nutrients it requires from a wet patch of soil. Males normally gather salts and pass them to females while mating. Photo: Sanjay Sondhi

The gaudy baron is a widely-distributed species, which is found in the Himalayas from Himachal Pradesh in the west to northeast India, and in the Western Ghats. It prefers forested areas and stream edges, though it may also be seen in fruit orchards. Like other barons, the gaudy baron can often be seen basking in the tree canopy, descending to the ground to feed on rotting fruit, tree sap, or even moist soil. Being powerful fliers, on being disturbed while feeding, they soar up to the canopy. However, a patient butterfly watcher will always be rewarded, as the baron will often return to rotting fruit to feed. 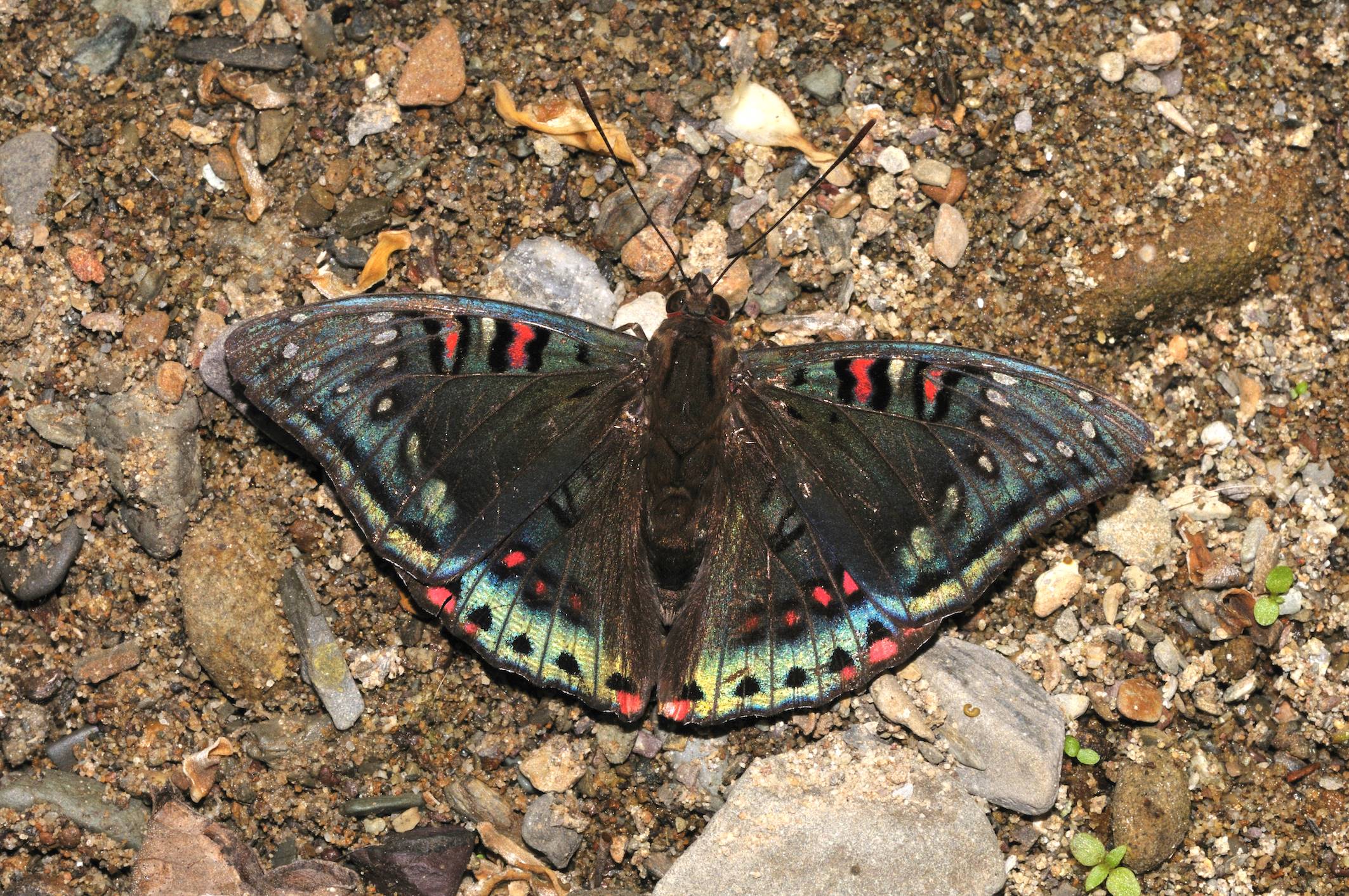 Iridescence on its upper side gives the gaudy baron (Euthalia lubentina) a stunning hue that allows it to stand out on the forest floor. Photo: Sanjay Sondhi

Gaudy barons lay their eggs on the mistletoe family of flowering plants called Loranthaceae, which includes plants of the genera Dendrophthoe and Scurrula. These plant species typically grow in the upper canopy, which is where this butterfly spends a lot of its time.

The caterpillar of the gaudy baron is fascinating. In its final stage, before it pupates, the caterpillar is bright green, with green spikes protruding from every side of its body. Despite its funky appearance, the butterfly camouflages itself remarkably well on the surface of a green leaf.

The gaudy baron starts of as red-brown egg and soon turns into a caterpillar with ten pairs of spiny purple-tinged legs. Photo: Haneeshkm — CC BY-SA 4.0

Amongst the whoops of the western hoolock gibbon, the gaudy baron settled at a moist spot for long enough to give me some lovely mood-elevating photographs, before it made a swift retreat back up into the canopy.