With soft, expressive eyes, a glossy, tan coat and a slender body, the graceful chinkara is soothing sight in the hot, harsh desert

I love the chinkara. Who cannot fall in love with this delicate, dainty Indian gazelle? When it runs on sand dunes on its small hoofs, it looks like a ballerina dancing on its toes — only flying sand particles indicate the spots where the hoofs have hit the ground. After moving 200-250 m, the chinkara stops, looks behind, and ‘snorts’ which sounds like someone is sneezing with a blocked nose! It resumes running, finally floating away on the horizon. Such scenes enchant me over and over again.

The chinkara stands at about 3 feet tall, weighs 15-23 kg, has lyrate horns (females have smaller horns), sandy-brown upperparts, white underparts, a cocky black tail, and long, slender legs. Although it is found in open scrub, thorn forests, open dry deciduous forest, arid and semi-arid areas, the elegant and delicate creature is in its finest element in the desert. 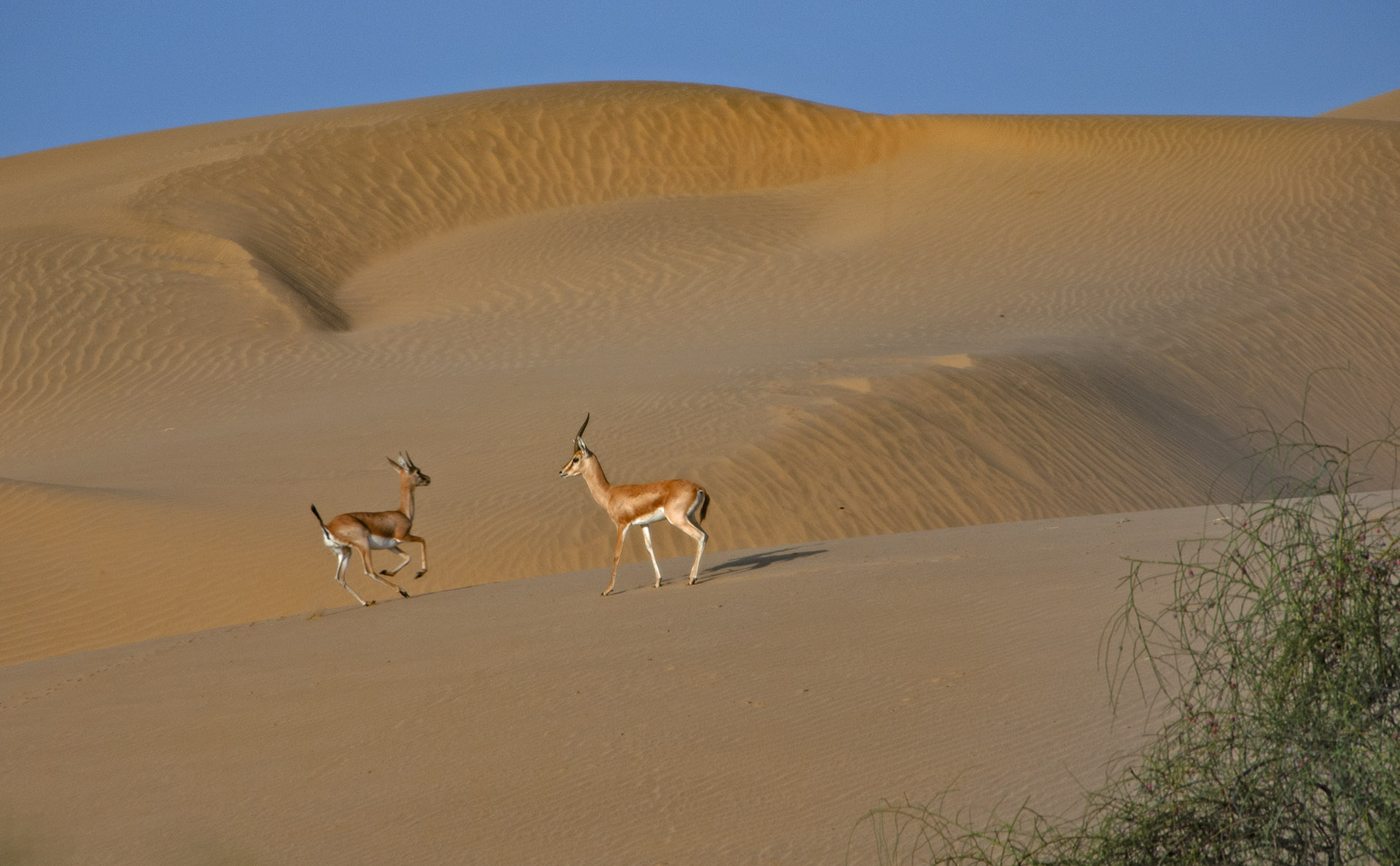 In India, the largest population of the chinkara is found in the Thar desert. According to a study in 2001, the Indian chinkara population was estimated at 100,000 with 80,000 living in the Thar Desert. Photo: Dhritiman Mukherjee The Indian gazelle is a beautiful antelope found in deserts and semi-arid regions of India. When it senses danger, its stamps its front foot and makes snorts through its nose to alarm others, earning it the local name chinkara or 'the sneezer'. Cover Photo: Dhritiman Mukherjee

Africa is the ancestral home of gazelles and antelopes, where 72 of the world’s 91 species are found. India is fortunate to have six species of which three species are endemic to the Indian subcontinent. The four-horned antelope is unique to India with a small population found in Nepal. The blackbuck is confined to India and Nepal (with an introduced population in Pakistan where it was exterminated due to hunting). The nilgai has the same distribution with almost 99 per cent population in India. In the trans-Himalayas, small numbers of Tibetan antelope and Tibetan gazelle occur in Ladakh and north Sikkim — a majority are found in the vast Tibetan plateau. The Indian gazelle or chinkara is found from Iran and Afghanistan to India. Like most antelopes and gazelles, it is extensively hunted. Today, in Iran and Afghanistan it survives only in rocky, hilly areas where motorised hunting is difficult, while in India and Pakistan a fairly good number survives in the Thar desert, and other parts of India.

I have studied the chinkara closely for a long time now. Nearly 25 years ago, I wrote three papers on the chinkara detailing its then distribution in India. I found that chinkara is seen in nine states of India and nearly 80 protected areas. I also conducted a study on the number of chinkaras in the Thar desert — the results were published in my first book Wildlife in the Thar in 1997.

Meet the chinkara's guardian angels — the Bishnoi community of Rajasthan, who watch over the graceful gazelle.

The chinkara, along with the blackbuck, is considered a sacred animal by the Bishnois, a Hindu community that lives largely in Rajasthan’s Thar Desert and some northern states of India. Though the Bishnois protect the chinkara, it is still extensively hunted by other communities. In the early 1990s, I counted 32 chinkaras per square kilometre in some areas occupied by the Bishnois, while less than one chinkara per square kilometre in non-Bishnoi areas. Today, the numbers have declined thanks, mostly, to free-ranging stray dogs. According to Peeraram Dhayal Bishnoi of Sanchore, who has single-handedly established a Chinkara Rescue Centre, there used to be nearly 8,000 chinkara in his area, now less than 500 are left. Ten years ago, he used to spot 20 to 25 injured chinkaras every day, but not more than one or two are delivered to him in a week. The free-ranging stray dogs are now the new exterminator of wildlife in India.

Chinkaras live in small solitary groups of 2-5 individuals. In some rich foraging areas, many groups come together temporarily so occasionally large herds of 30-35 are seen, but such grouping is extremely rare. Adult males have small territories which they defend during the breeding season. When a female is in heat, she selects a male of her choice. Once the job is done, the baby takes six months to appear. The new born is able to walk as soon its dries up but its tender legs cannot take it very far, so the mother hides it in tall grass for the first few days. She grazes around her new born fawn and keeps eye on predators. In overgrazed areas, fawns are sometimes seen on completely bare ground, sitting motionless, perfectly camouflaged. From a distance, a baby chinkara with head flat on the ground, and legs curled up looks like a lump of brown mud. It is sufficient to fool natural predators like foxes and jackals, but domestic dogs have learned where to look for them. A fawn has no chance against a pack of free-ranging dogs. 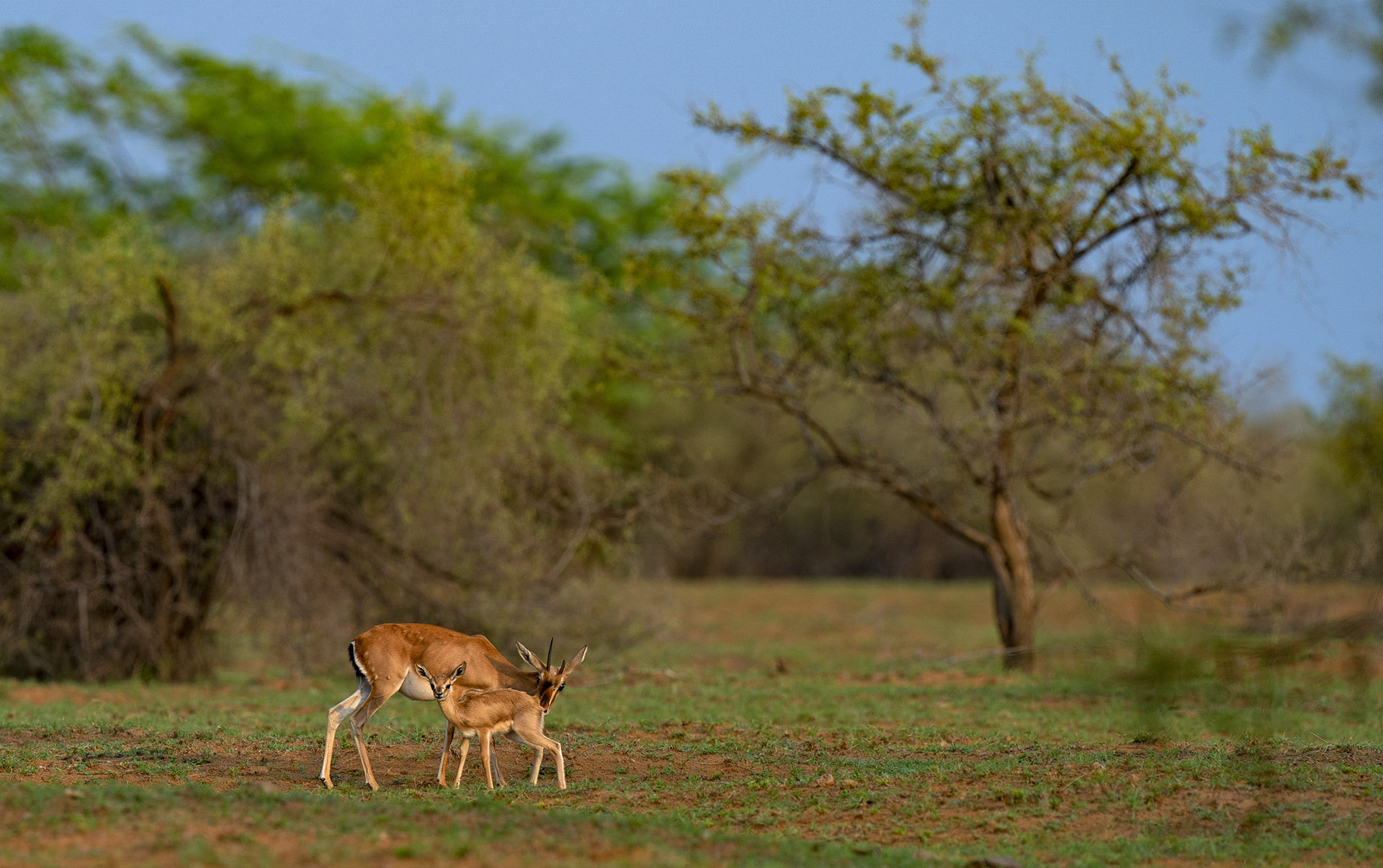 Female chinkaras care for and raise their young ones until they are weaned at about two months of age. Some stay with the mother until she has another offspring. Photo: Dhritiman Mukherjee

Another interesting behaviour seen in chinkaras, and common in many ungulates, is their defecating habit. I have seen chinkaras defecating while moving around but with a special purpose — they select a spot to defecate repeatedly. Scientists call such a defecating site a midden. This behaviour is seen in nilgai, blackbuck, four-horned antelope, rhinos and many other deer species. A midden is considered as a post to communicate that the area is occupied. Males also urinate on middens, thus leaving hormones and pheromones that indicate the quality of the territory owner. If the territory owner is not present, itinerant males defecate/urinate on the midden to mask the smell of the occupier. To complicate it further, in some species even females use the midden. Middens deserve their own separate article. 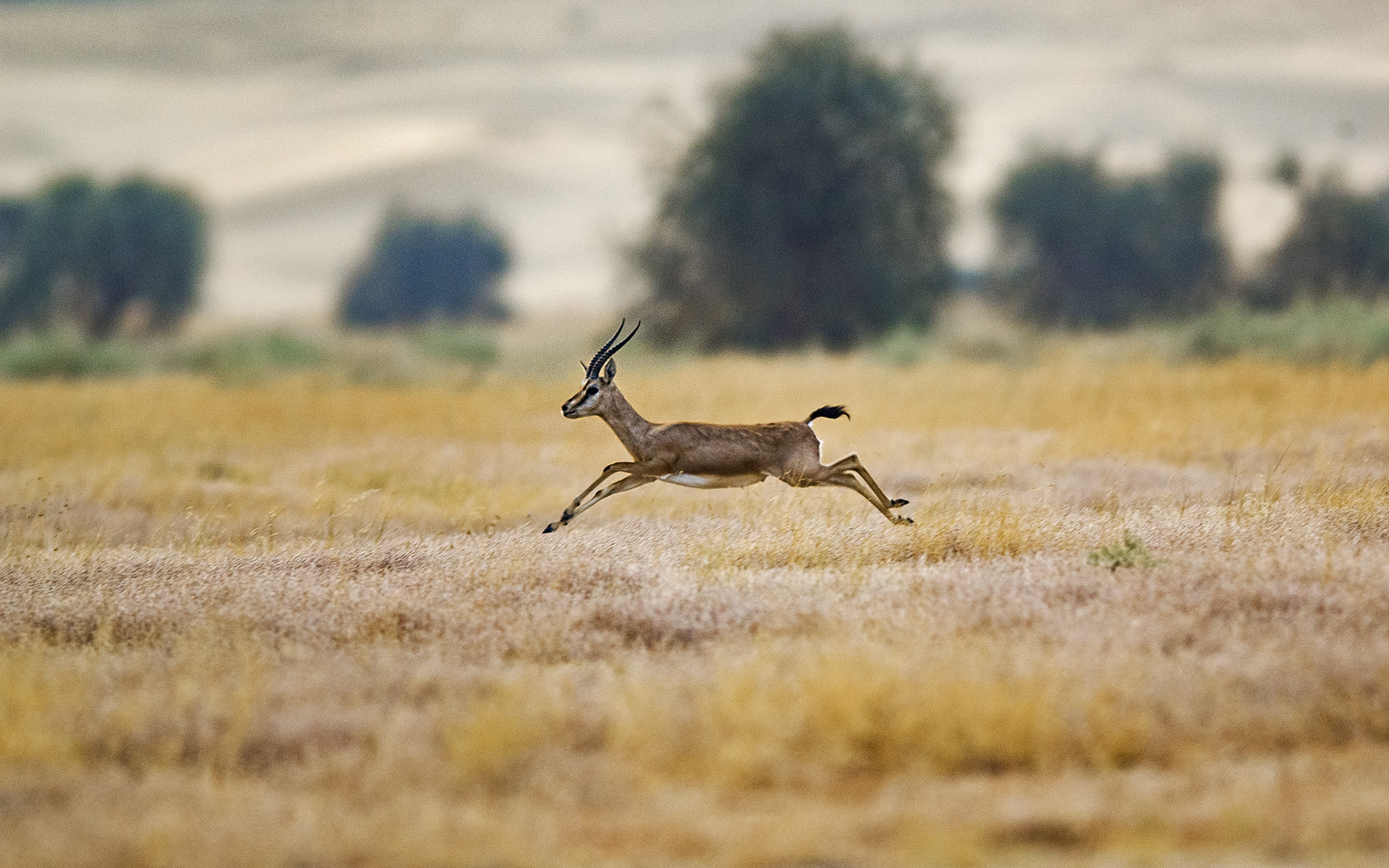 When threatened, the agile and swift chinkara can run with bursts of leaps, sometimes with all four feet into the air, and quickly get away. Photo: Dhritiman Mukherjee

The chinkara is mainly a browser but it also grazes when the grass is soft and tender after the rains. An interesting adaptation to arid climate is that the chinkara can live without water for months, getting all its moisture from herbs, shrubs, flowers, and ripe berries. When the water is available, it drinks regularly, particularly in hot summer months.
Presently there is no danger to the chinkara getting extinct as it is found in many well-protected areas, but I am afraid it will disappear from many areas in the Thar Desert if the dog population is not controlled. I am sure, even the sand dunes will not be happy to see the graceful ballerina gone.