At the first sign of danger this rare antelope darts into the undergrowth. Spotting a pair in Panna Tiger Reserve is like hitting the jackpot 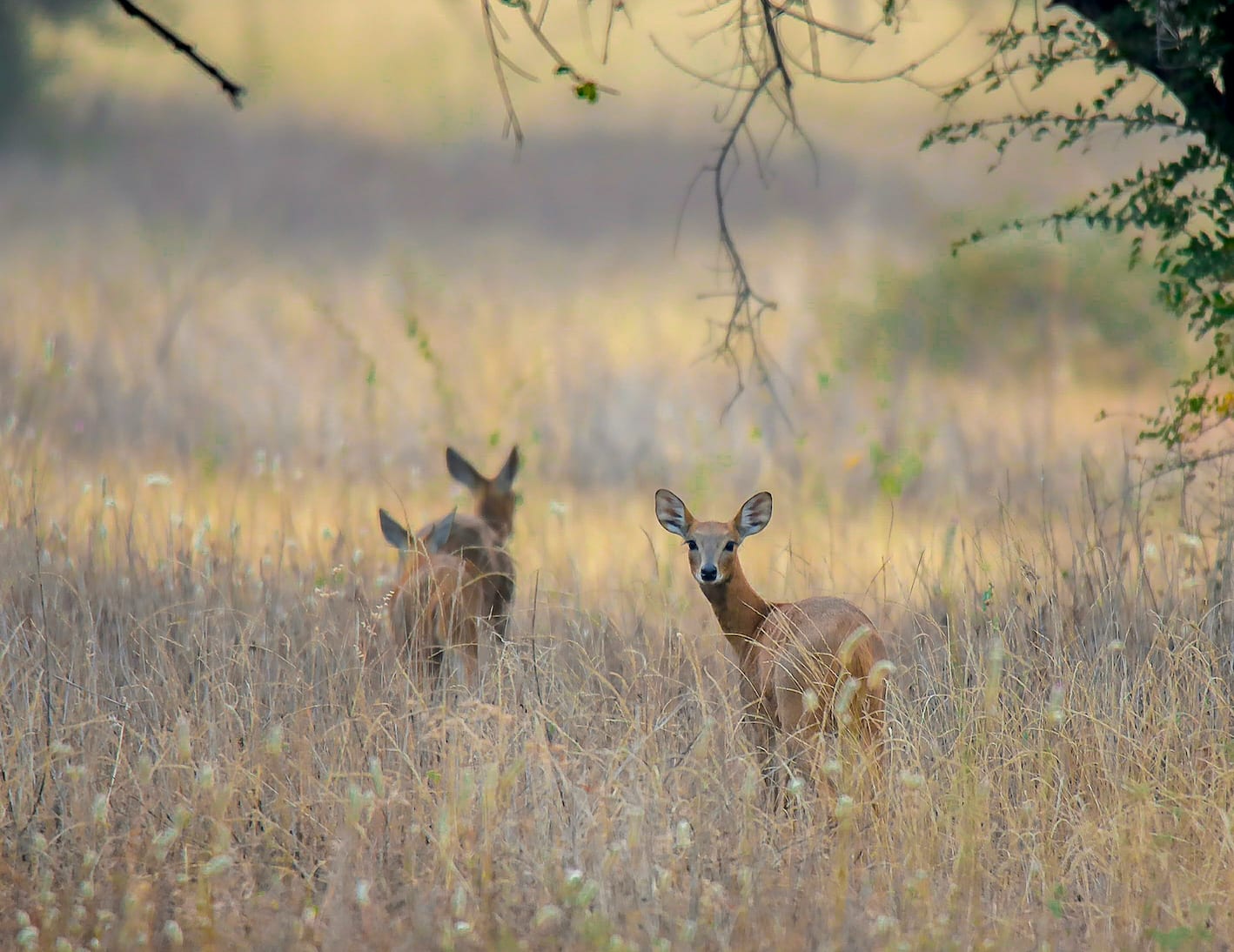 The road was bone-rattling to say the least. After several visits to Panna Tiger Reserve through the convenient and popular Madla gate, my guide and I had taken a detour to the Hinauta gate. We’d taken the metalled road that branched off from NH39, the Khajuraho-Panna road, which circled around the reserve via Majhgawan road and skirted diamond mines. In fact, calling it a road was being incredibly charitable. However, once inside the gate, all discomfort was forgotten since the experience of the reserve from a new angle was quite different. When entering through Madla gate, one is immediately dwarfed by towering teak plantations, but for a few kilometres past Hinauta gate, the land is flat scattered with patches of light-brown to golden-yellow grass of varying height. The trees started several metres inside from the trail. Visibility was unhindered as dawn broke and gave everything a shimmering gold hue.

Further, the grass was taller, almost three feet high, but it was still flat grassland. “A tiger could be sitting just a few feet away in the grass and we wouldn’t know it,” my guide Uttam Ahirwar said. Fresh pug marks on powdery soil along the path indicated the big cat could be tantalisingly close and yet wholly undetectable. But as we rounded a bend, a pair of animals caught our attention. Grazing at the edge of the grassland were two deer-like animals. What made them fascinating was the two sets of tiny horns growing on their heads. This was a rare sighting of the chousingha (literally, four horns), also known as the four-horned antelope or Tetracerus quadricornis; by some accounts, they are rarer than a tiger.

The chousingha has a slender body and yellowish-brown to reddish coat and a short tail. It prefers areas of dense undergrowth where it can hide when it feels threatened. Photo: Ashwin HP Cover Photo: The four-horned antelope is endemic to the Indian subcontinent. Once common throughout the deciduous forests of Central India, it is now considered “Vulnerable” on the IUCN Red List. Cover Photo: Phalgun Patel

The two animals were startled by the sudden appearance of our vehicle. They froze, staring at us with ears perked, tails twitching, and limbs taut as if ready to take flight. With the engine switched off, we tried to be as still as possible, taking care not to make any jerky movements or sounds. “It is rare to see one, leave alone two,” Uttam said under his breath. Barely a couple of feet tall, the one nearest us was in a spot with sparse grass and therefore more clearly visible. It had light-brown fur and blended perfectly with the grass behind. On its head were two sets of horns that were unlike deer antlers or the elegant lyrate horns of a chinkara. These were like miniature cones, the bigger pair, about eight-cm-long sat just in front of the ears, while the smaller set, barely 3-4 cm high, was on the forehead between the eyes. A little black line ran down from the edge of each eye towards the nose, giving it a teary, doleful look.

Found only in India and Nepal, the four-horned antelope is the only bovid with four horns (only males have horns). They are classified as “Vulnerable” on the IUCN Red List with an estimated population of 10,000 animals, a majority of which are found in India. They are present throughout the country in wooded forested areas with abundant grass. Some experts argue that they are sedentary and live very close to water sources, though there is no conclusive agreement on various aspects of their behaviour. My guide told me they were extremely shy and did not even make alarm sounds, preferring not to draw attention to themselves. Instead, they quickly dart behind thick cover at the merest sign of danger, and lie low on the ground to escape detection.

The chousingha’s diet comprises shoots, leaves, bulbs, grass, fruits and flowers. Even while feeding, this wary animal will raise its head regularly to scan its surroundings for danger. Photo: Mihir Godbole

As we stood watching the duo, the chousingha further away from us was less wary of us and continued to graze; its preferred food is grass, shoots, and fruits. The other one maintained its wary gaze, ears alert and still frozen in place. Something soon spooked it and it turned and quickly disappeared into the thick grass. Its movements seemed a bit jerky, not graceful like the spotted deer. Its companion followed on its heels, and within seconds both were camouflaged within the golden-brown landscape.