With travel effectively coming to a halt in 2020, most birdwatchers traded in visiting bird sanctuaries for observing common birds around them. In March 2020, I watched the silk cotton tree from my balcony, noting down all the birds that visited it. For 2021, I found something else to occupy my days, thanks to a newsletter that is probably little known outside the circle of the most avid Indian birdwatchers.

In the middle of a deep dive online into the common birds around me, I came across the Newsletter for Birdwatchers, a bimonthly periodical for ornithology in India started by the renowned naturalist Zafar Futehally in 1959. In its March 1976 issue, a gentleman called T Gay had enquired of his fellow readers “the earliest date in a calendar year on which they had heard the Brain-fever call”, referring to the common hawk-cuckoo (Hierococcyx varius).

If you have ever heard the call of the common hawk-cuckoo, you will know why the term “brainfever” is used to describe it. The three-note “cu-cu-koo” is repeated in a rising crescendo and ends abruptly, only to begin again a moment later. It can be heard most times of the day and sometimes even at the oddest hours of the night. The febrile (feverish) call has a frantic quality to it, probably hinting at the male bird’s desperate search for a mate. As with most in the animal kingdom, it is the male which is tasked with calling for mates and warning off other males; the females are conspicuously silent.

Female and juvenile common hawk-cuckoos are browner than males, which have ashy-grey upperparts. Both male and female birds have streaks on their feathers and a distinct yellow rim around the eyes. Photo: David Raju. Cover photo: A resident of the Indian subcontinent, the common hawk-cuckoo is popularly known as the brainfever bird due to a loud, repetitive three-note call the male produces during the breeding season. Photo: Abhishek Das

While the common hawk-cuckoo belongs to the Cuculidae family (which includes cuckoos, koels and coucals), it has evolved as a visual mimic of the shikra (Accipiter badius). Both have ashy grey plumage, patterned breasts, and a similar style of flying and landing. In fact, it resembles the shikra so closely that other birds often raise an alarm when they see the common hawk-cuckoo. Like many other birds in this family, the hawk-cuckoo is a brood parasite, laying its eggs in another bird’s nest (usually the jungle babbler) for its young to be raised by someone else.

Coming back to Gay’s query in the 1976 newsletter, someone called Mosaddique Umar had responded in the following issue, saying that he had heard the hawk-cuckoo calling as early as December. From what I remembered from my observations in previous years, the hawk-cuckoo calls relentlessly during peak summer. But outside of its breeding season (summer), I don’t remember hearing its call at all. I referred to my bird guide to crosscheck and found this vague information: “Becomes more vocal during the hot weather.” My curiosity was piqued, I decided to find out for myself the earliest date in the summer when hawk-cuckoos start calling. 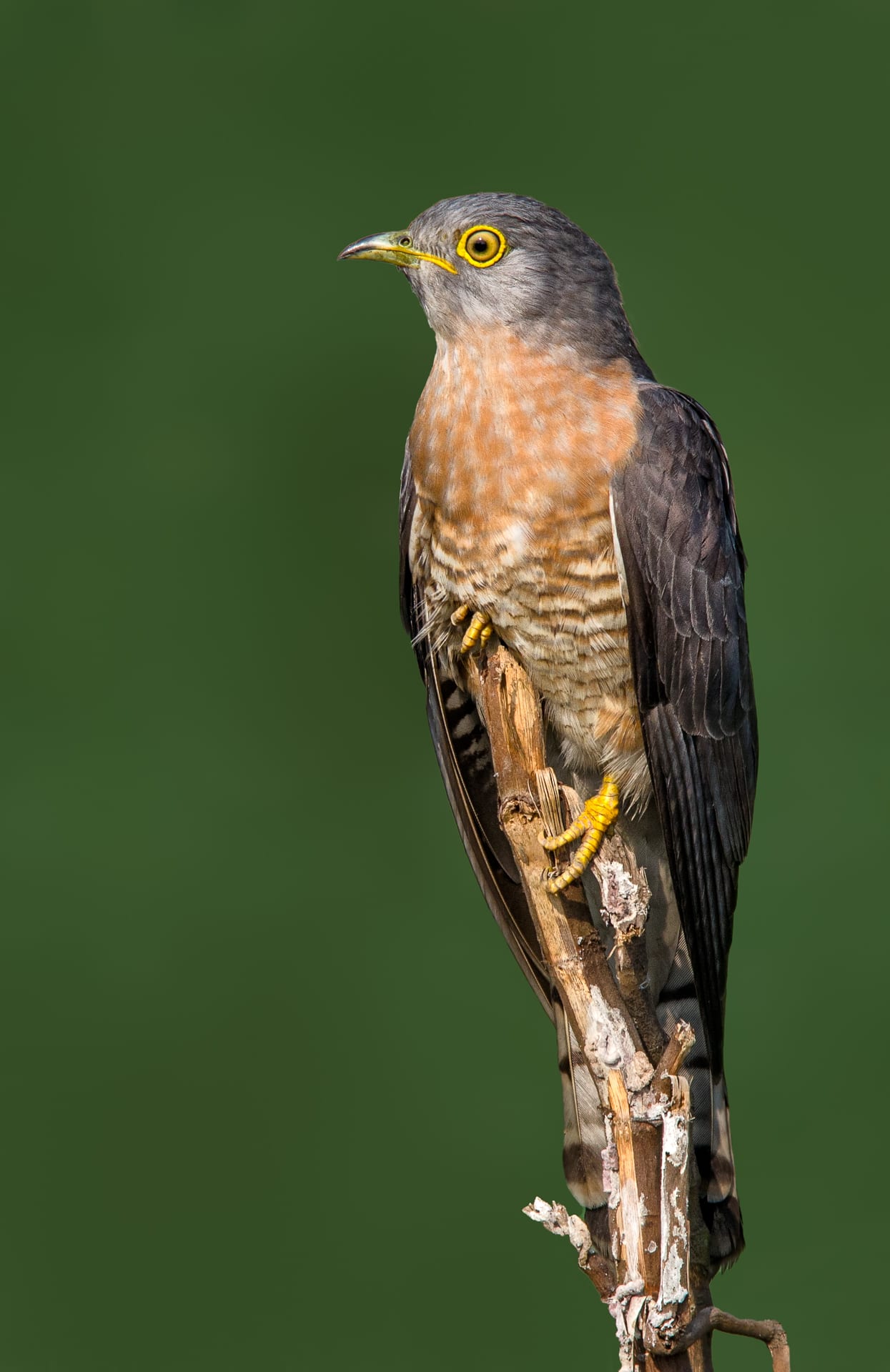 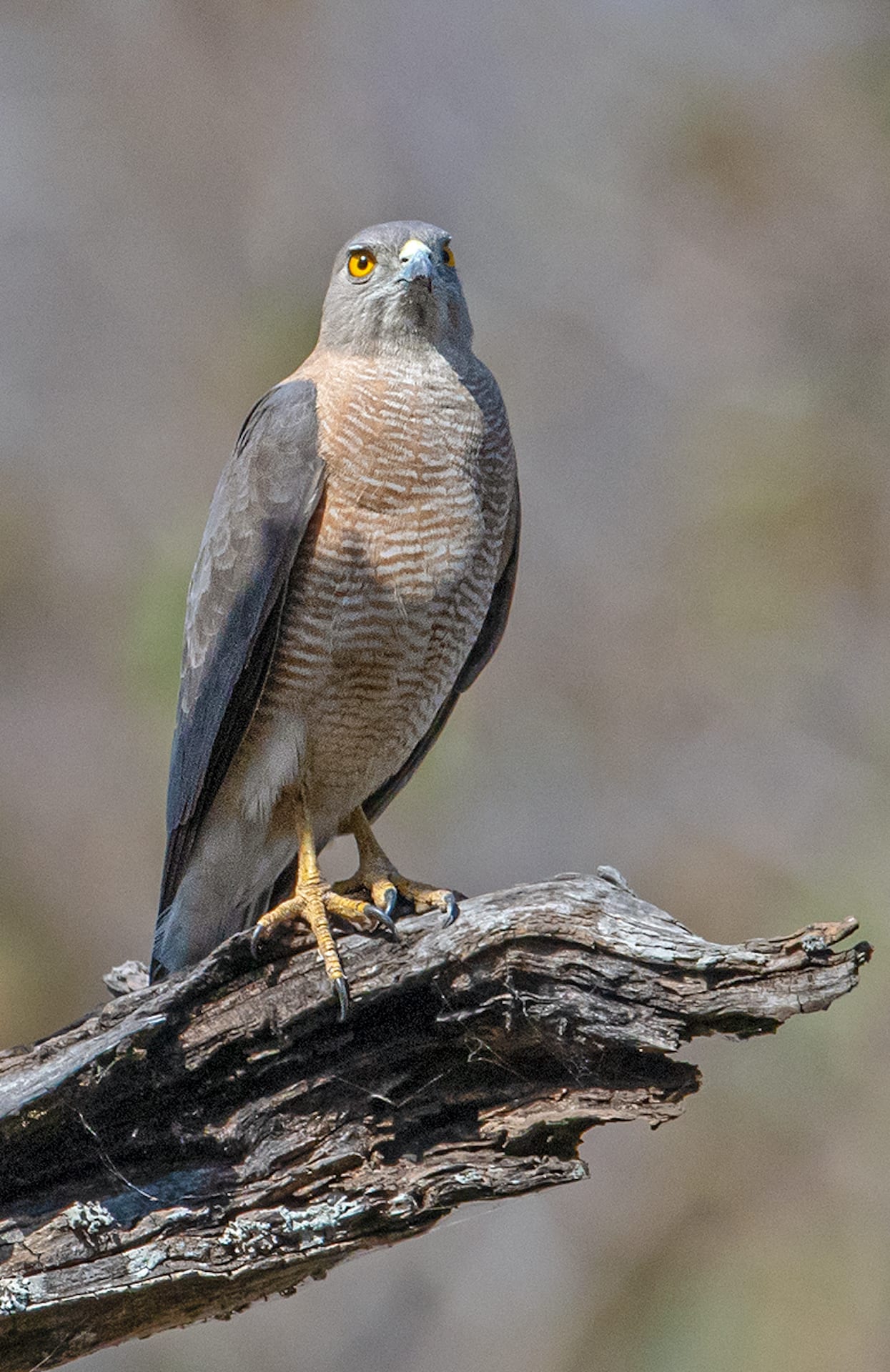 The common hawk-cuckoo’s (left) plumage resembles that of the shikra (right), a bird of prey. Even the way it flies and lands on a perch is similar to the shikra. Photos: Abhishek Das (left), Aseem Kothiala (right)

This bird’s range spans almost all of India. In different parts of the country, it has inspired a variety of folklore, depending on what people hear in its call. In Maharashtra, people understand the hawk-cuckoo’s call as “paos ala” or “rain is coming”, hinting at the monsoon rain that arrives soon after the summer. In Tamil, the hawk-cuckoo is called akka kuyil and the bird’s call is heard as a repetition of the word “akka” (elder sister in Tamil). The story around it goes like this: two sisters went to bathe in a river and the elder sister drowned. The younger sister turned into a bird and has since been calling for her “akka”. The colonial British living in India thought they heard something quite different in the hawk-cuckoo’s call. Frank Finn, the British ornithologist who was later the Deputy Superintendent of the Indian Museum in Calcutta, wrote in his book The Birds of Calcutta that “an equally worthy rendering of the performance…is “O lor’! O lor’! How very hot it’s getting – I feel it, I feel it!”

Birds have inspired folktales all over the world and in a culturally diverse country like India, stories and beliefs centred around birds are innumerable. Many of these stories explain a bird’s call or impart its significance for a particular community. Common ones are: the cawing of a crow signals the arrival of guests; good luck is associated with the call of the greater coucal. Cuckoos have long been seen as harbingers of spring. They have been the focus of many romantic songs and poems in India. Sarat Chandra Mitra, a noted Bengali scholar of Indian folklore, wrote in the Journal of the Asiatic Society of Bengal that “[The cuckoo’s] notes are supposed by the poets to awaken feelings of love in the hearts of lovers separated from their sweethearts, and make them yearn for the company of their absent mates.” 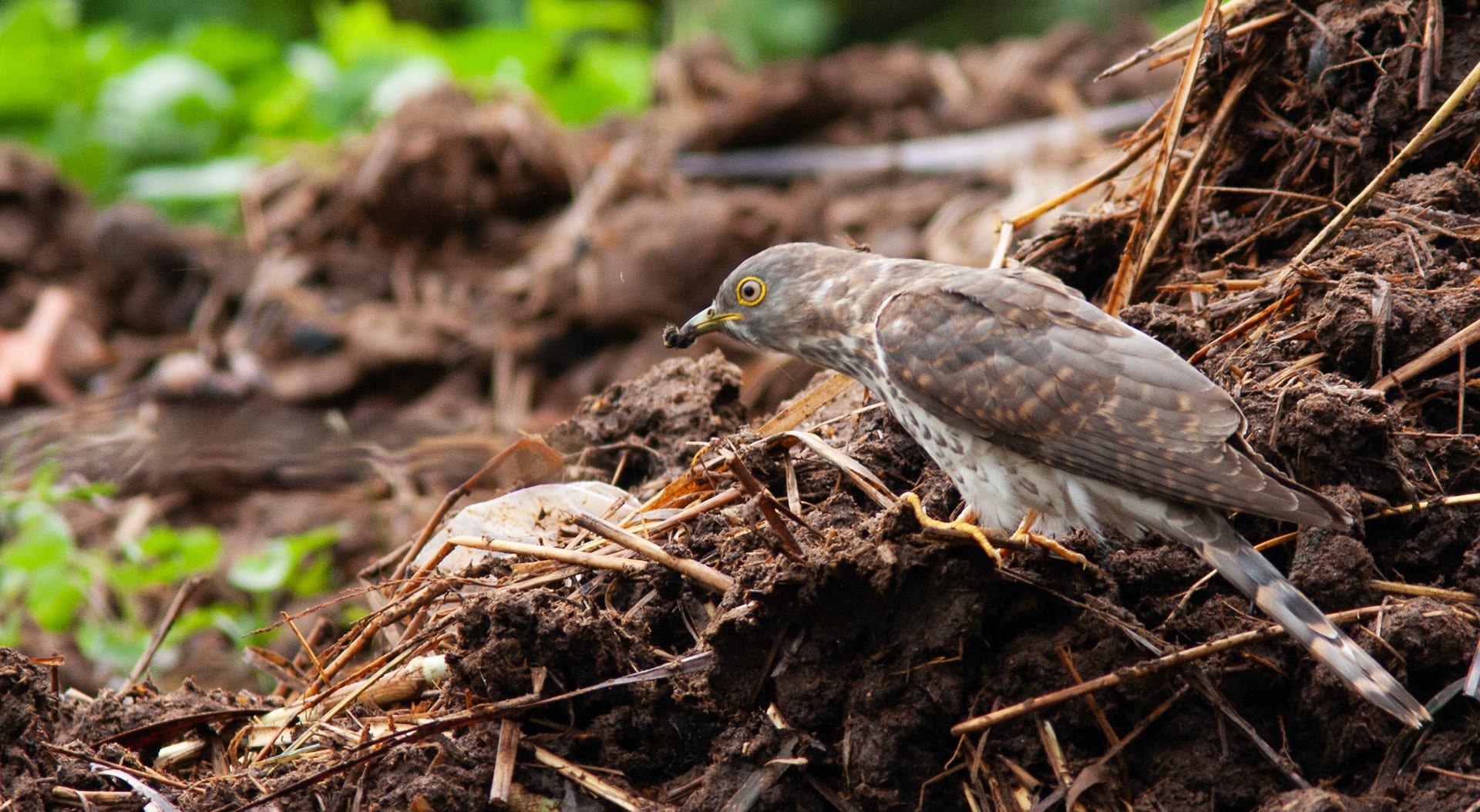 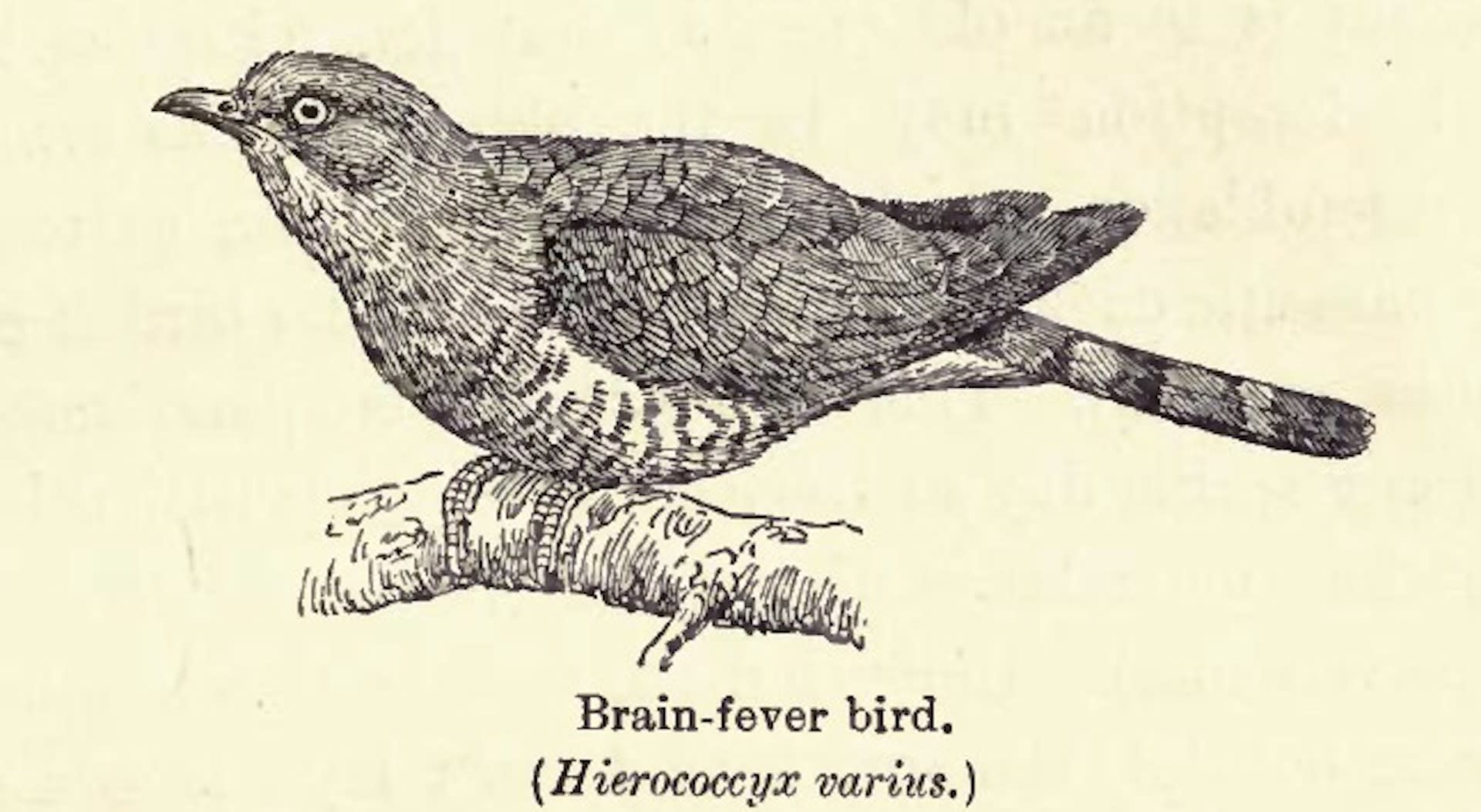 (Left) The common hawk-cuckoo feeds on insects, especially hairy caterpillars. It rubs the caterpillar on a branch to remove its toxins before swallowing it. (Right) An illustration of the “brainfever bird” from the book Birds of Calcutta (1917) in which British ornithologist Frank Finn writes about the cuckoo's call.
Photos: Shreeram MV (left), Frank Finn, Public domain (right)

The hawk-cuckoo’s call however has no such romance attached to it; no poet has waxed eloquent about their call, even though both the koel (Asian koel, Eudynamys scolopaceus) and the hawk-cuckoo can be heard around the same time of year. Where I live, koels have been singing their melodious songs since the beginning of March; the hawk-cuckoos are stubbornly silent. The persistent calls and many sightings of the koel reminded me that in all my years of birdwatching, I’ve only seen the hawk-cuckoo once. They can be rather hard to spot, sitting deep in a tree’s canopy.

Finally, on the 20th of March, I heard a hawk-cuckoo calling late at night. I wondered if my obsessive listening had led me to dream up the sound. But I heard it again in the morning. The bird sounded hesitant, as if unsure if it was time to start looking for a mate yet. After that day, I heard the hawk-cuckoo occasionally throughout the last week of March and early April, though it wasn’t quite the febrile call yet that had given it the name “brainfever bird”. That would probably begin a couple of weeks later when the Indian summer truly came into its own.

I wonder, though, where hawk-cuckoos go once they are done sticking their eggs in the babbler’s nest. I read somewhere that birds that sing loudly in spring and early summer go quiet later because of the demands of nesting. Since that is not the case for the hawk-cuckoo, maybe they are silent because they don’t need to sing anymore — no females to woo, no males to parry with, no reason to draw attention to themselves. Just a quiet existence to look forward to until the next summer when the cycle begins again. 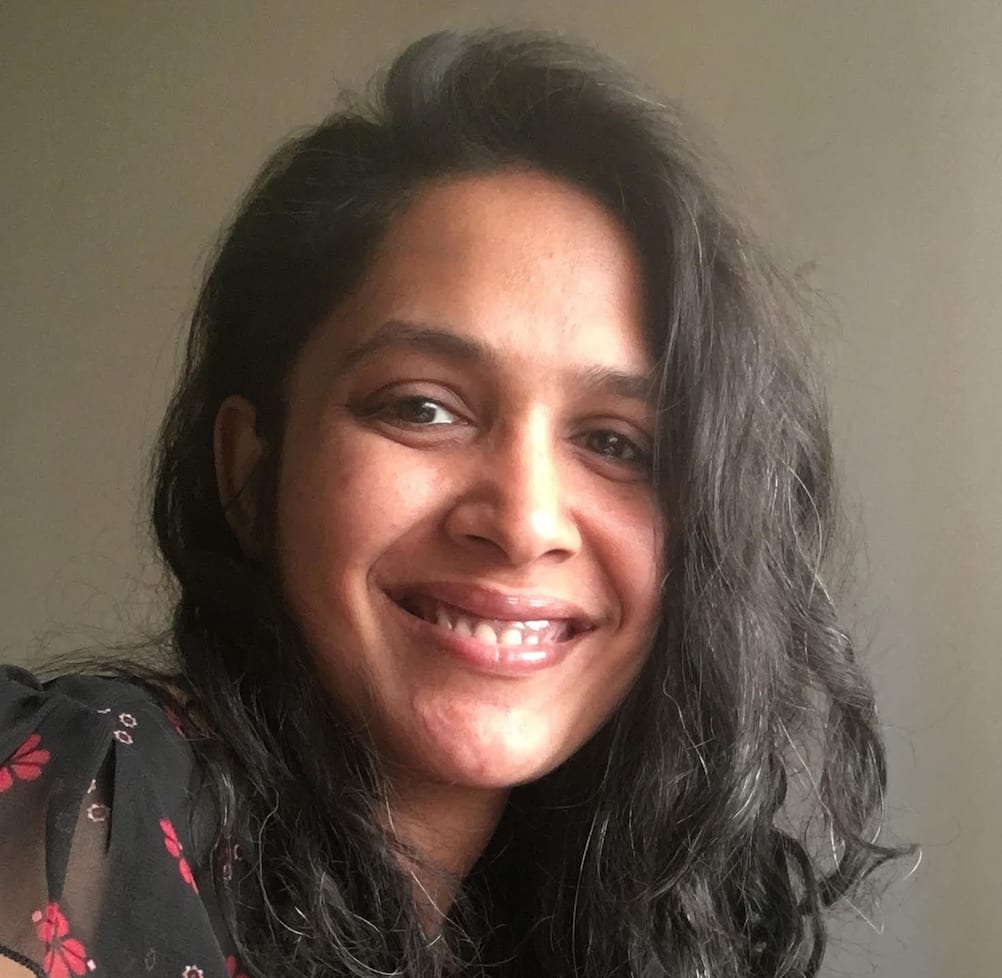 is an artist on a quest to learn more about the natural world and share its wonders through her art and writings.