Its vivid electric blue and orange colouring has led to a timeless fascination with its beauty, but this little bird is also an excellent hunter

The mist meandered on the lake’s surface. Dawn had broken across the sky, and yet the shafts of early light had not yet fallen on the calm, freshwater lake. As always, I was not quite sure what I would see as a spectator at Lokhandwala lake in the heart of Mumbai’s Andheri suburb. The quacks and whistles of the lake’s two resident species, Indian spot-billed ducks and lesser whistling ducks, are always a welcome melody as I watch them glide on the surface of the water. Suddenly, two keen, sharp whistles break the monotony. A bolt of blue shoots out from the left of the lake, stops mid-air, and I get my chance. “Khat-khat-khat” goes the shutter on my camera, freezing the shimmering shape in a frame to reveal the identity of the diminutive but exquisite avian lake resident, a small blue kingfisher.

Placed in the subfamily of river kingfishers, Alcedininae, and usually found in the vicinity of aquatic habitats, the small blue kingfisher (Alcedo atthis) is more widely known as the common kingfisher. However, this is not necessarily because it is “common to see” (its cousin, the white-throated kingfisher, is spotted more frequently through much of India). The “common” here likely refers to its wide distribution across the Eastern hemisphere, from Japan in the east to Morocco in the west, from Finland in the north to Papua New Guinea in the south. Its migration pattern tends to depend on the region it is inhabiting. In temperate habitats, the species is resident during the summers, however with the onset of winter and freezing water bodies, it migrates locally and across international borders to warmer climates. In tropical areas, these kingfishers are found year-round as long as the conditions continue to remain habitable. 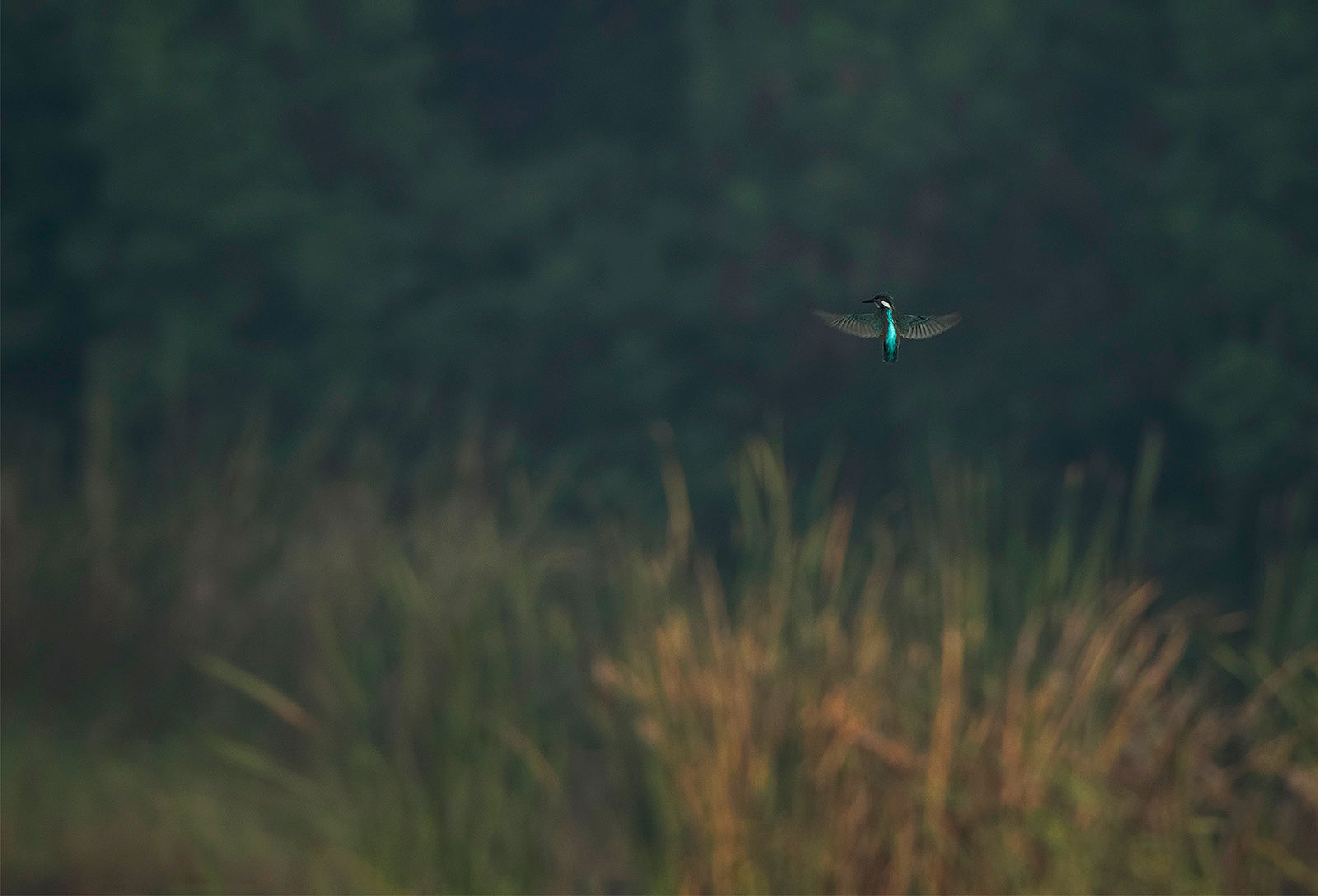 Like some other species of kingfishers, common kingfishers may hover over waterbodies to hone in on prey. The “hover” may last just a few seconds before the bird chooses to dive or flies off to reconnoitre another spot. Photo: Shashank Birla
Cover Photo: The plumage of the common kingfisher looks particularly vivid to our eyes because of a phenomenon known as structural colouration, which is the presence of microscopic structures within the feathers that produce bright colours or iridescence from certain angles. Cover Photo: Dhritiman Mukherjee

As the name suggests, the kingfisher specialises in hunting fish, though it also feeds on other smaller aquatic fauna such as insects and crustaceans. Its hunting technique is equal parts stealth and speed. First, it will find a suitable perch near the water from where it can observe passing prey. Engaging its remarkably adaptive eyesight, it scans the water below for telltale signs of movement. Special adaptations, including the presence of oil droplets in its eyes, are thought to help in reducing glare and improve colour vision to detect prey under the water’s surface. Once it has spotted prey, it bobs its head up and down. This behaviour is thought to help the bird accurately judge the distance and direction of its strike, accounting for refraction between the air and water. On occasion, common kingfishers hover as well, its wingbeats a blur as it locks on to its prey while in mid-air.

The strike is a swift, steep dive, bill-first into the water. To accurately reach its prey, it switches to its specially adapted binocular vision underwater, its eyes shielded by a transparent eyelid. It uses its long, sharp bill for grasping (and sometimes, even impales) its chosen prey before it breaks the water’s surface again. Once perched, the kingfisher may then adjust its grip and, if it is a medium-sized fish, will proceed to repeatedly bash the prey on its perch before swallowing it whole. Just 16-17 cm in length, this diminutive kingfisher is a fearsome predator in its own right. 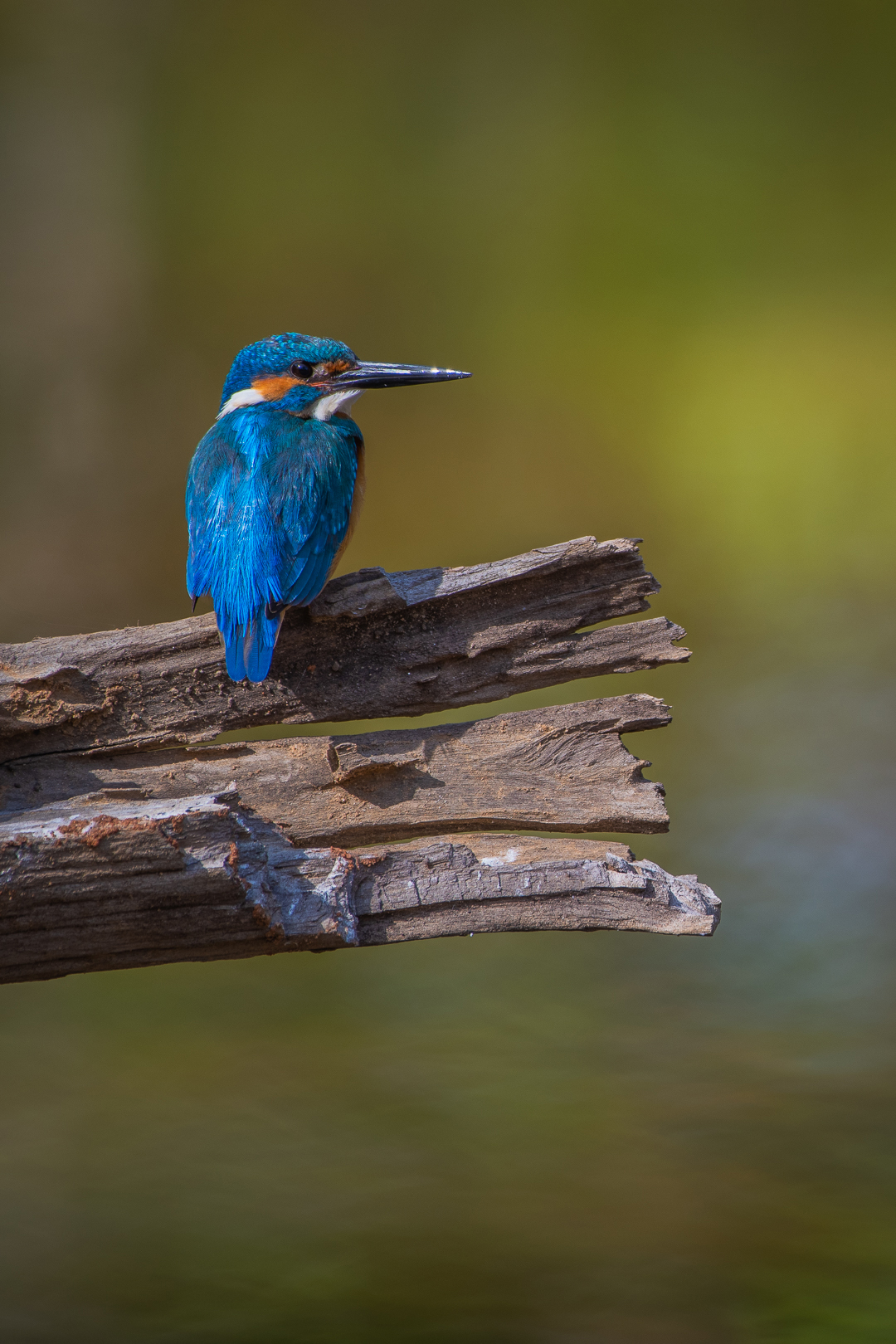 When viewed from a safe distance, common kingfishers are remarkably cooperative photographic subjects, as is this one spotted in Bandhavgarh. Photo: Aditya Panda

Like other predators, they are territorial. In a large wetland, you may see multiple individuals defending their patches. Common kingfishers tend to nest alongside the vertical banks of waterbodies, where they excavate holes and have are even known to nest in cuttings in nullahs and canals. Nest building is an arduous process and may take anywhere from 10-20 days with both partners excavating the nest, turn by turn, hitting the soil, zipping in from a nearby perch. They may even abandon completed nests due to unfavourable conditions such as human disturbance, poor protection against weather elements, or unsuitable soil conditions. According to studies conducted by the British Ornithology Trust, females lay between 2-10 eggs, and both parents incubate the eggs in turns for up to 20 days. Entirely dependent on their parents for the first 3-4 weeks, a young kingfisher’s life remains challenging as it grows into adulthood and negotiates the dangers of starvation, drowning, predation, and other threats; only a few from each brood make it to adulthood.

The adult bird’s vivid electric blue, turquoise and orange shades have led to a timeless fascination with its beauty. In fact, its scientific name “atthis” too is a devotion to its beauty and is derived from the Greek poet Sappho’s mention of Atthis, a beautiful maiden who was her love interest. In India, the bird adorns paintings, postage stamps and various memorabilia, though perhaps it is best recognised as the logo of the beer (and now-defunct airline) brand, Kingfisher. 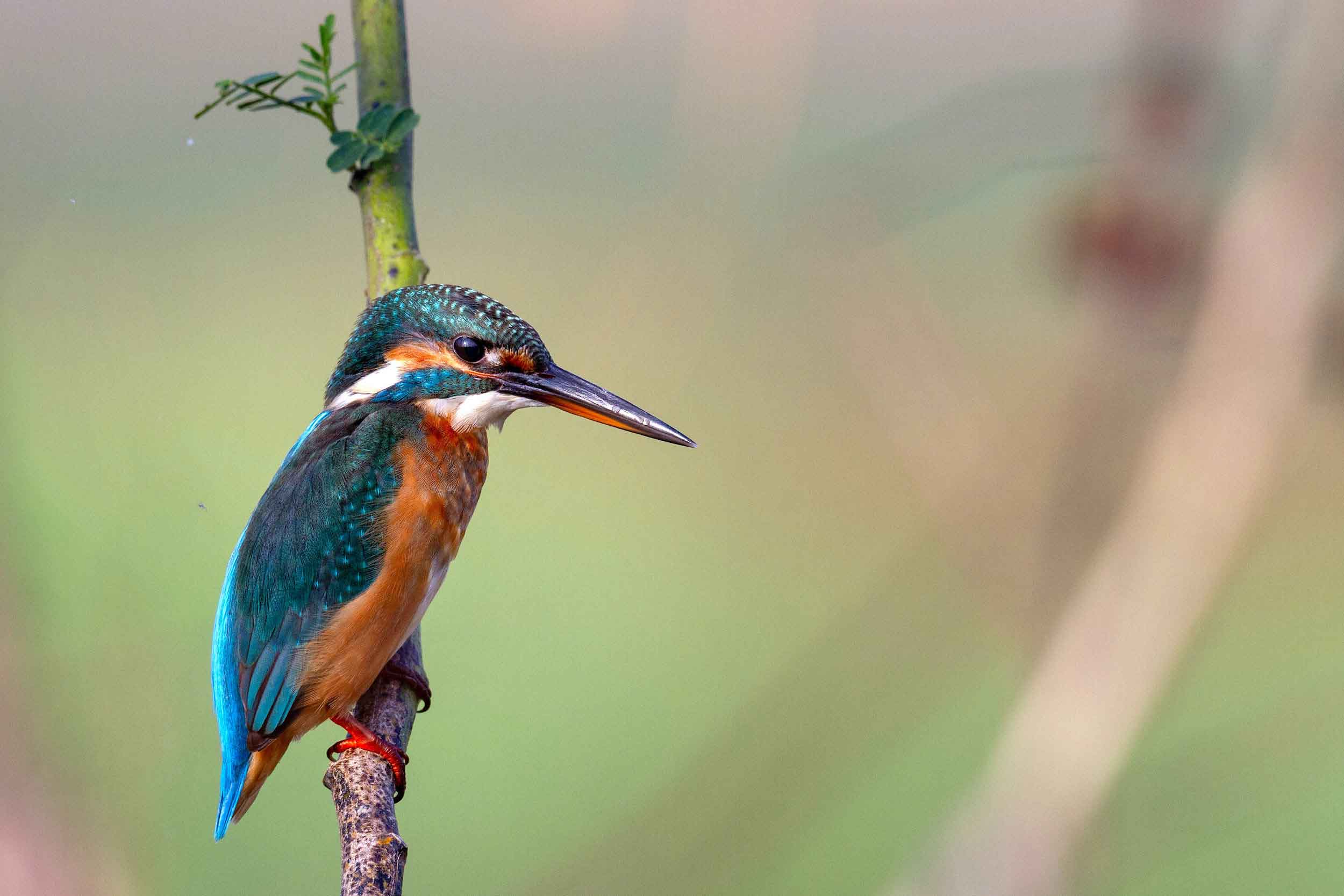 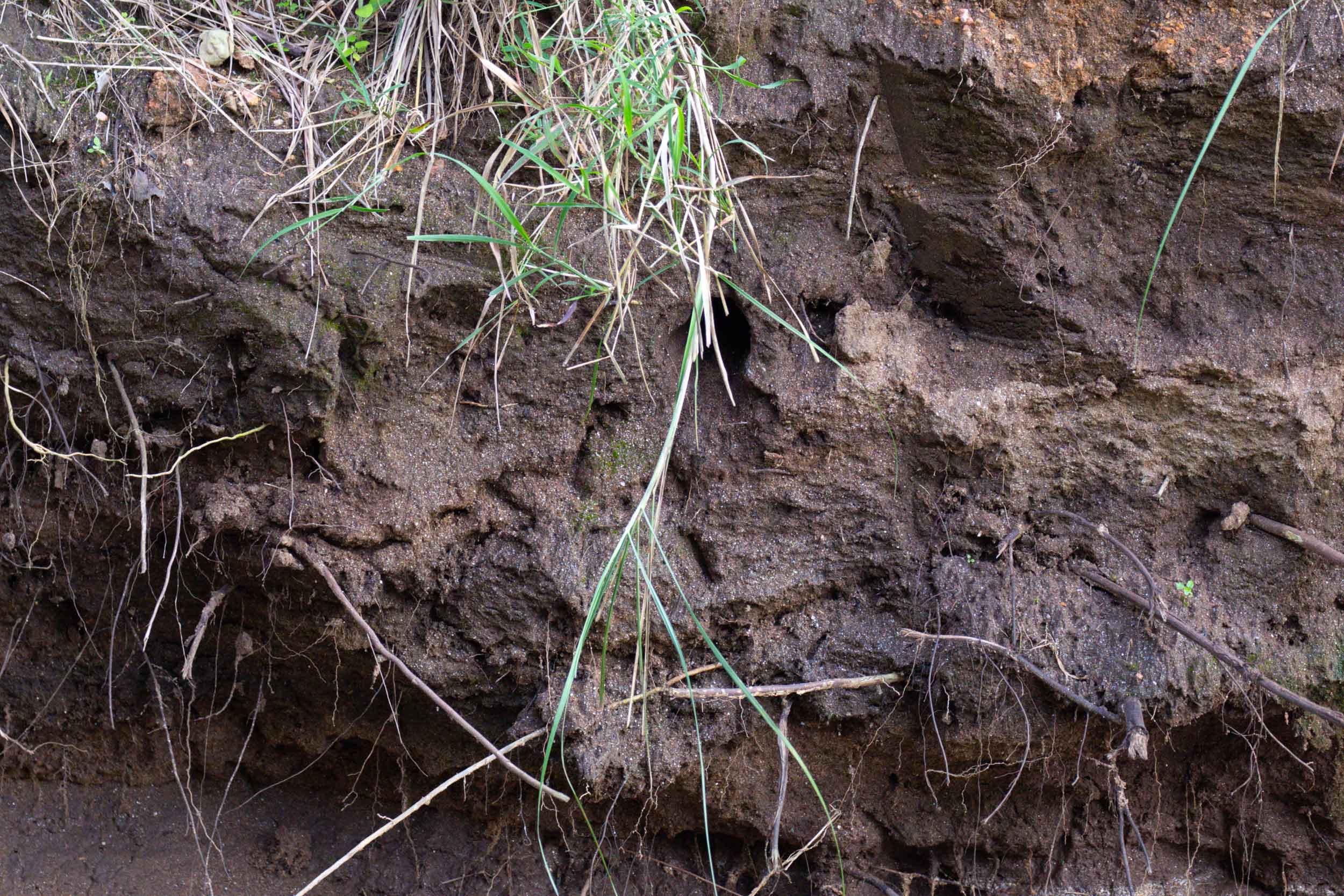 (Left) One of the subtle differences between the male and female is that most of the lower mandible of the bill is bright-red in the adult female while it is largely black in the adult male. (Right) The nest of the common kingfisher will often be close to a water source. According to observations (Ali & Ripley, 1987), the nest is a horizontal tunnel culminating in a widened egg chamber. Photos: Arindam Bhattacharya (left), Saurabh Sawant (right)

Due to its wide distribution and adaption to life in human-dominated landscapes, the common kingfisher remains listed as a species of Least Concern on the IUCN Red List of Threatened Species. However, courtesy of its feeding and nesting habits, the presence of the species is an excellent indicator of the health of the ecosystem it inhabits. Wetlands are a haven for biodiversity, not least among them, resident avian species such as the common kingfisher, but they have been under ceaseless pressure from infrastructure projects. Unless we carefully preserve wetlands, it may not be long before the common kingfisher can no longer live up to its name.

is a naturalist, photojournalist and founder of the safari tour outfit, Wilderlust Expeditions.