A proactive forest department, supportive local communities, and the constant presence of researchers has helped the pig-tailed macaque’s conservation in the forests of Hollongapar

By Neeharika Gogoi and Narayan Sharma

Walking through a pebbled path in the earliest hours of a dewy morning, a fog still clings to the forest canopy. Morning calls of gibbons stir the silence of the forest. They signal to us that the inhabitants of Hollongapar Gibbon Sanctuary are waking up. We walk along the straight forest path and take a turn onto a forest trail, intending to venture deeper into the jungle.

Suddenly, we hear a sound close to our right, a soft rustle of leaves. A small monkey stares down at us from the nearby tree. Fur frames its face. Its face is coloured a pale pink, its dainty fingers grip the branch of the tree. We can almost swear it stole someone’s eyeliner and skilfully applied it to its eyes. Entranced by the monkey, we step towards it and the spell is broken. It retreats into the jungle. We realise that we were greeted by a pig-tailed macaque, in a forest in the heart of Jorhat district, Assam. 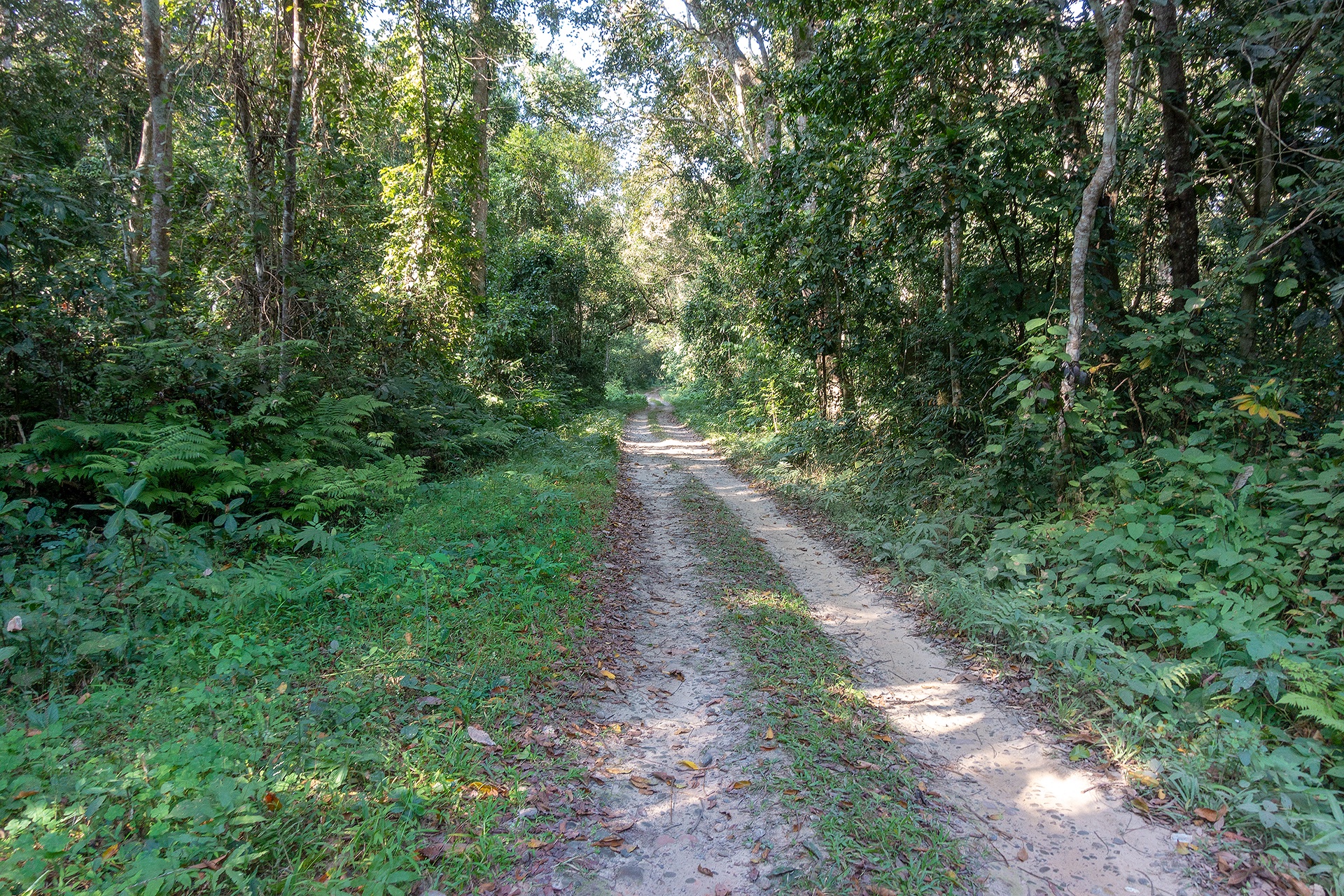 Despite having an area of only 17.71 sq. km., the Hollongapar Wildlife Sanctuary in Assam harbours a thriving population of northern pig-tailed macaques. Photo: Arindham Bhattacharya. Cover photo: Udayan Borthakur

The macaques have olive brown fur all over their body, except their undersides, which are white. Photo: Udayan Borthakur

Shy and furtive, northern pig-tailed macaques (Macaca leonina) are predominantly arboreal and diurnal. Groups of pig-tailed macaques are composed of multiple males with their female cohorts and offspring. Their infants and young ones always stay in close vicinity of their mothers or adult female members. A group will frequently break into smaller sub-groups and forage separately. However, they keep in touch with each other through soft ‘coo-coo’ calls, as visual contact is severely disrupted by the dense foliage. These dense rainforest monkeys fare better in undisturbed forests and will rarely venture out to forage.

Infant macaques usually stay by their mother’s side, but begin to explore their surrounds by the time they around a month old. Photo by: Udayan Borthakur

Pig-tailed macaques are predominantly frugivorous i.e. their diet is composed of fruits, however, they also extensively feed on insects. They love to forage for insects in the foliage of Vatica lanceafolia, a Critically Endangered dipterocarp tree species, found in healthy density in Hollongapar. Vatica, along with other medium-sized tree species, form the mid-canopy that is very crucial for the movement of pig-tailed macaques and other canopy-dwelling species of Hollongapar. However, due to unsustainable harvest of Vatica, which is the most preferred fuelwood tree for locals, the mid-canopy is severely broken. 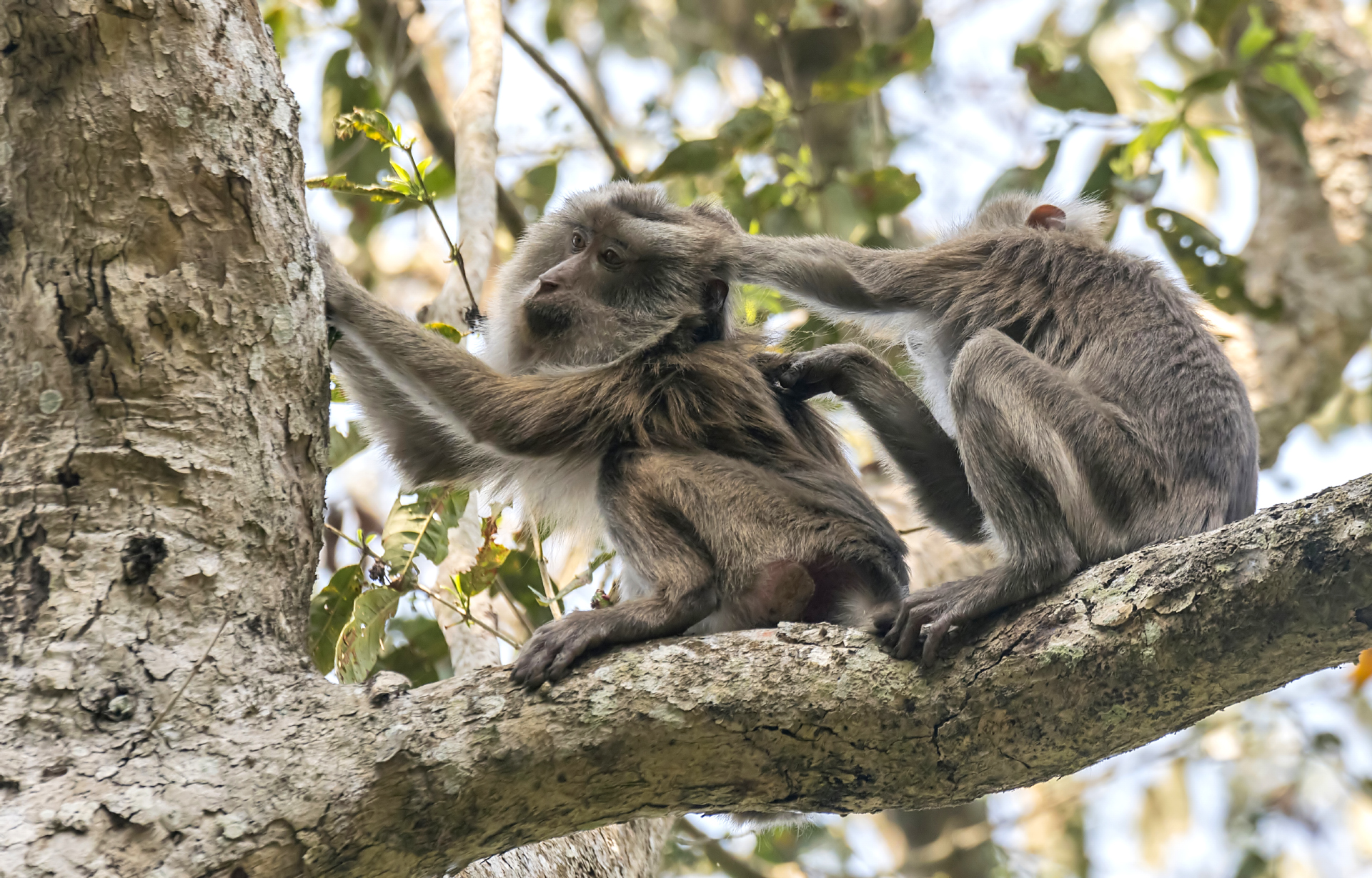 Females in a group exhibit tolerance for each other through grooming, kissing and feeding together. Photo: Udayan Borthakur

Over the past 30 years, the pig-tailed macaque has become extinct in several forest fragments of the Upper Brahmaputra Valley of Assam. However, its population is thriving in Hollongapar despite its habitable forest area having been reduced to just 17.71 sq. km. A major threat to pig-tailed macaques is habitat loss. Our study found that the occurrence of pig-tailed macaques is positively correlated with the area of forest fragments. However, the fragments of Upper Assam have lost one-third of their area due to expansion of agriculture, tea plantations, and human habitation. Many of them have been reduced to faint shadows of their past. 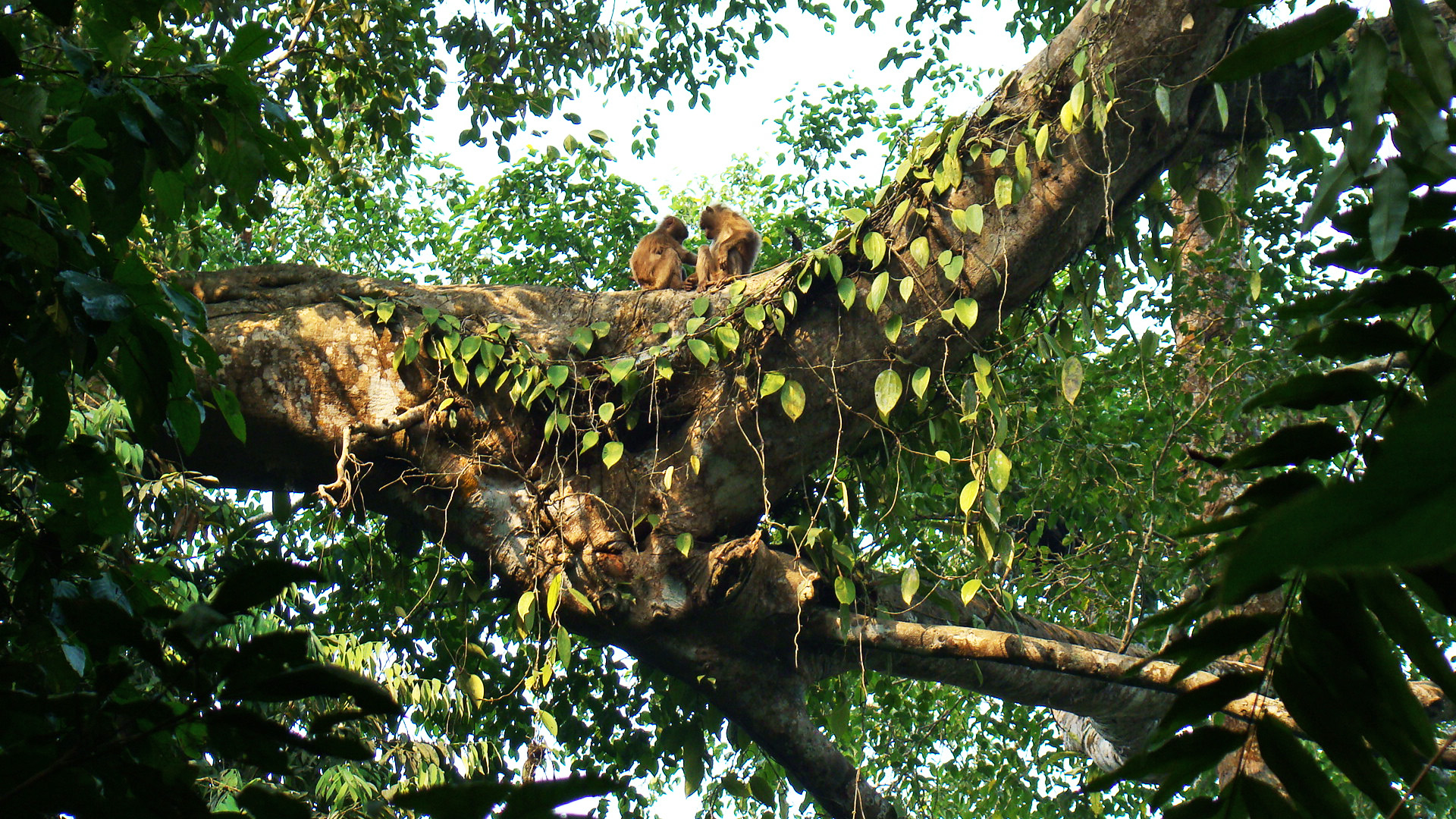 Though they have disappeared from other forests, pig-tailed macaques have increased in numbers in Hollongapar. At present, four groups of pig-tailed macaques reside in Hollongapar, with around 20-25 individuals per group. A possible reason for this increase may be due to non-overlapping of their diet with the stump-tailed macaque, which mostly forages on the ground. Both species avoid each other when they are in close vicinity. Pig-tailed macaques, however, sometimes compete with hoolock gibbons for food and trees to sleep in. We also suspect that the disappearance of Assamese macaques from Hollongapar may have benefitted pig-tailed as both might have shared a similar niche.

Hunting of pig-tailed macaques used to be a major practice in the past and still is in some parts of Northeast India. Their meat is consumed, and the bones are used in traditional medicine. Some macaques are even kept as house pets. In Thailand, pig-tailed macaques are used to harvest coconuts. Pig-tailed macaques are elusive creatures; they hide from humans, particularly in areas where they are or were frequently hunted. Fortunately, that is not the case in Hollongapar, possibly due to a proactive forest department and the fact that the local communities surrounding the sanctuary do not hunt them. One possible factor that may have contributed to the sanctuary’s protection is the constant presence of researchers determined to protect the sanctuary and ever willing to report any illegal activities they detect.

These macaques communicate with each other through a soft 'coo-coo' call in the dense foliage. Photo: Udayan Borthakur

We traced our footsteps back to the edge of Hollongapar at dusk on day, straining our ears to catch the forest notes of the evening. We try to catch the soft ‘coo-coo’ call of the pig-tailed macaque but hear none. Darkness is descending, and the inhabitants of the forest have retired to their shelters, while the nocturnal creatures are ready to start their activity. Hollongapar never sleeps! The pig-tailed macaques are already safe and snug in their sleeping trees, tucked in for the night. We ponder how long will they continue to sleep safely in their roosts? How long will this forest persevere? Will the causes that threaten their existence push them to become extinct in this forest? If so, what can be done to deflect that terrible future? What can we do? Whatever we do, will it be enough? The answer lies somewhere in a very uncertain future.

is a PhD scholar in the Department of Environmental Biology and Wildlife Sciences, Cotton University.

teaches at the Department of Environmental Biology and Wildlife Sciences, Cotton University.