This family of birds has a reputation for high intelligence, thievery, murder, cunning — and having a good time 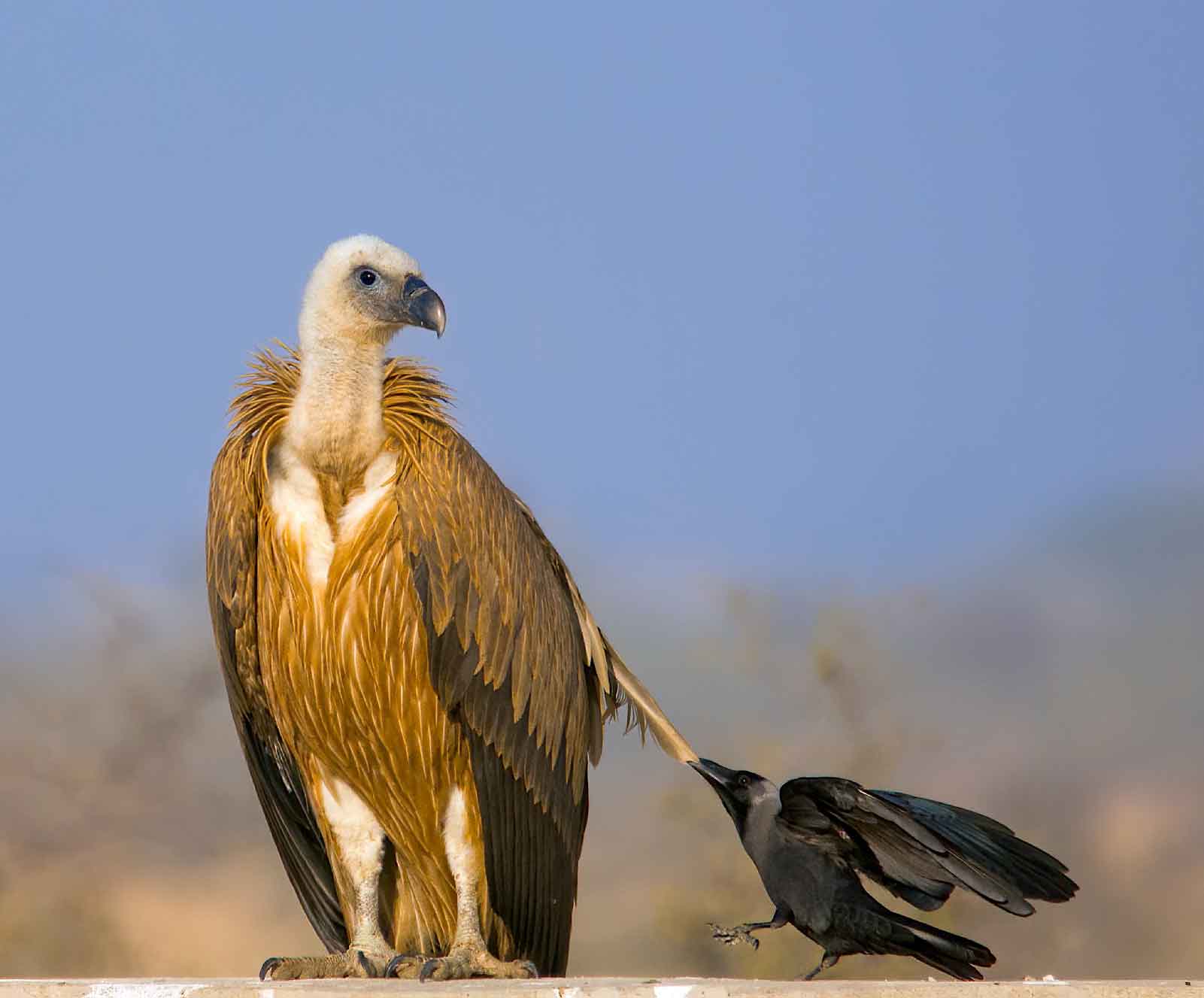 This bold, brutal, canny and plainly rapscallion Mafiosi of the Corvid family has spread and divided almost worldwide into as many as 133 different species, of which around 24 are found in India. All do not dress in black: some prefer blues, browns, emerald greens combined perhaps with black and white. They call themselves crows, ravens, choughs, jackdaws, magpies, treepies and jays. They’re all medium-sized birds with strong legs and purposeful bills, and a reputation for high intelligence, which they use for thievery, murder, cunning — and having a good time (often by teasing their victims beyond endurance). We’d better beware: at least one of them, the European magpie (Pica pica) has been found to possess self-awareness: it can recognise itself in a mirror, which is something only a few other animals can do. The New Caledonian crow (Corvus moneduloides) is into toolmaking with twigs and leaves, not to mention puzzle-solving: can lock-picking be far behind? Along with parrots, the corvids are right up there in the intelligence stakes.

(Left) House crows live in a wide range of habitats mostly around human habitation. (Right) They are primarily scavengers feeding on waste left behind by humans but do not hesitate to rob food from other birds and animals. Photos: Abhishek Das (left), Arpan Saha (right) Cover Photo: A griffon vulture being harassed by a house crow. Cover Photo: Vipul Ramanuj

In India, certainly, the best-known (and often most reviled) is the ubiquitous house crow (Corvus splendens). Black, beady-eyed, with an ash grey collar, this fellow lives wherever we do. It’s a bold yet shifty customer: sidling and shuffling up to your outdoor restaurant table to filch your sandwich from under your nose, departing with a hoarse “kaw!” of triumph. No, do not persecute it: it will recognise you for months afterwards and, along with its cronies, harass and hound you without letting up.
Of course, crows have their redeeming features too. They clean up after us — something which the municipal authorities often neglect to do. If you make friends with them — through regular tidbit payouts (what else) — they will fly down to you when called by name. For birders, crows often serve as an early warning system indicating the presence of a raptor (an eagle) or owl as they fly around in great noisy rabbles, mobbing the predator. 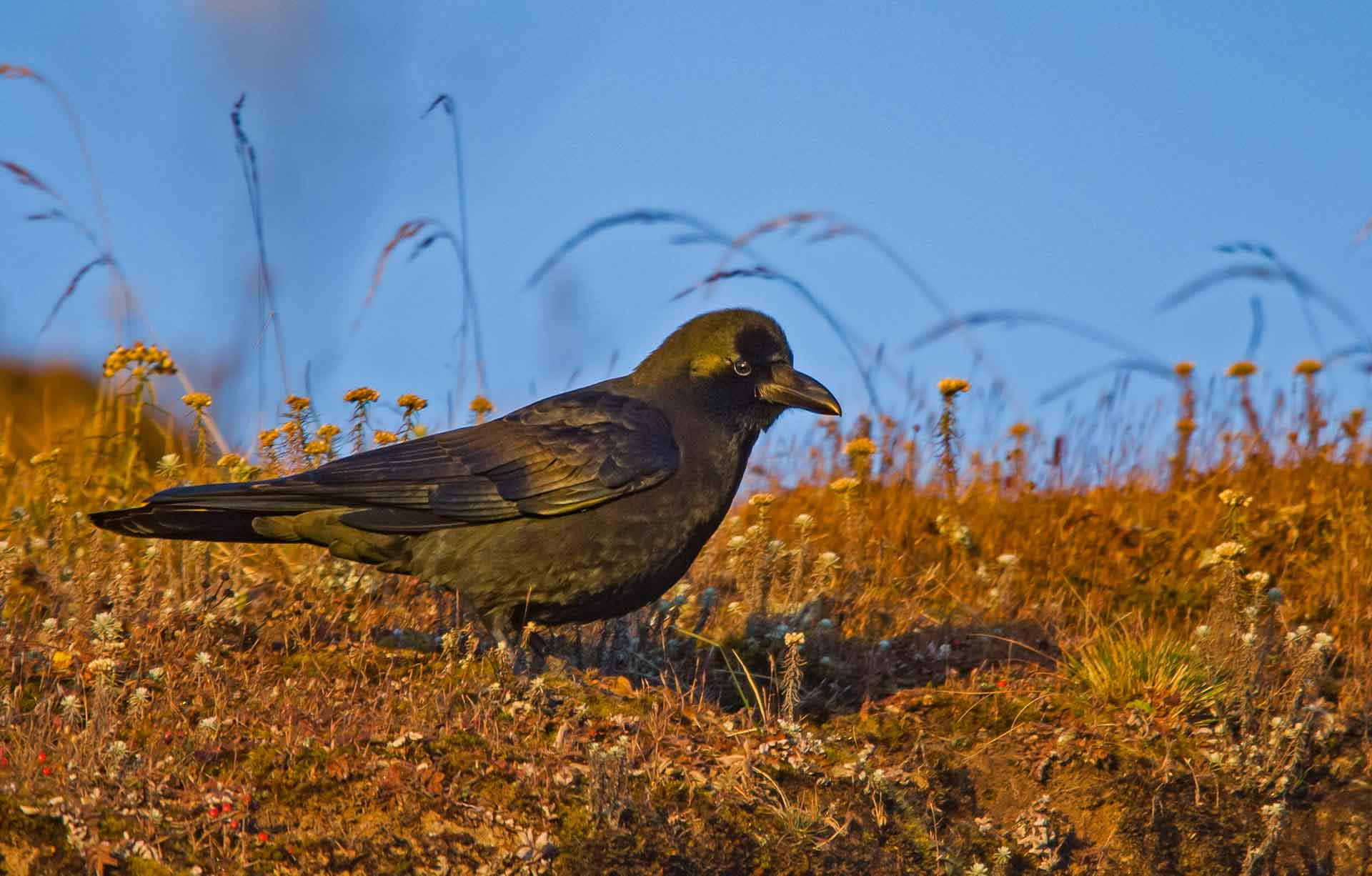 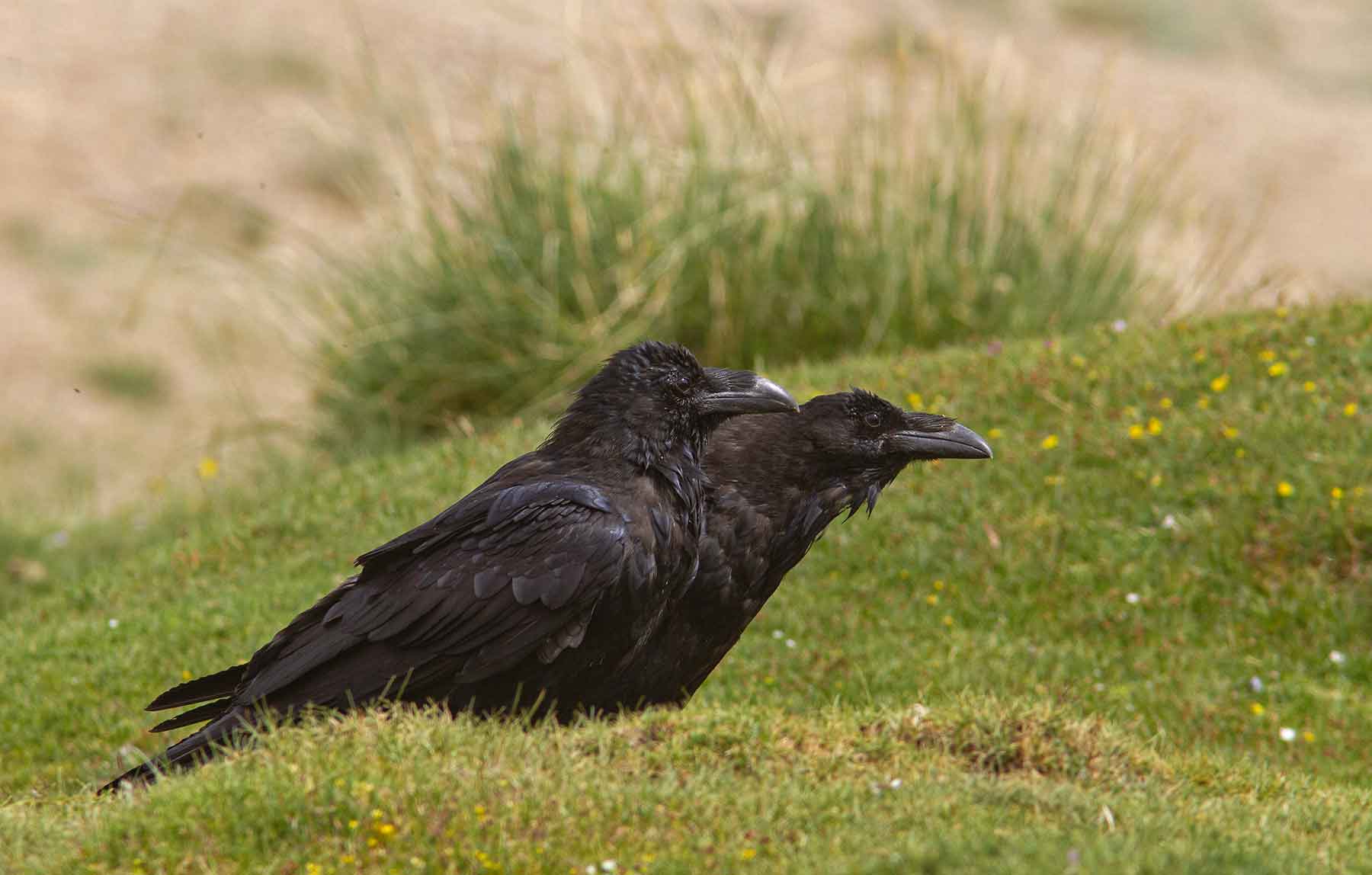 (Left) The large-billed crow can be distinguished from the house crow by its all-black body and long, daggerlike bill with curved top. This individual was photographed at the Singalila National Park in West Bengal. (Right) Common ravens are the largest perching bird in the world. They normally forage in pairs, flushing out prey in tandem, as seen in this image from Ladakh. Photos: Dhritiman Mukherjee (left), Shreeram MV (right)

In their personal lives, they are largely monogamous (though occasional hanky-panky does occur). They raise their families (3-4 young), usually in summer and build their nests in trees, often filching stuff we leave around: wire, iron hoops, and the like. Salim Ali mentions a delightful case where crows discovered that the overhead iron brackets used to hold in place the electric wires of Bombay’s (then brand new in 1922) suburban commuter trains made for excellent nesting sites and took to them en masse causing short circuits which brought the trains to a standstill! In another instance, a crow’s nest was found constructed almost entirely out of gold and silver spectacle frames filched from an optician’s shop in Bombay’s Fort area.

What makes this tribe so ubiquitous is that they will eat anything: from caviar to crap. While they have some deplorable dietary tendencies, such as systematically targeting smaller birds and their eggs and nestlings, they are always worth watching for happier reasons. Watch crows use the updraughts blowing up the sides of skyscrapers or mountains: they’ll catch the wind, soar upwards, then fold their wings and dive, dive, dive before straightening out at the last moment, cawing hoarsely with sheer enjoyment like schoolchildren on a rollercoaster. There’s nothing they like better than a good leg pull (or tail). I’ve watched them ruffle the pompous dignity of a peacock on several occasions, to say nothing of pulling a resting cow’s tail, eyes sparkling with sheer mischief. Crows have also been documented playing “king of the castle” and skating down a snowslide, again demonstrating their intelligence and ability to enjoy life. 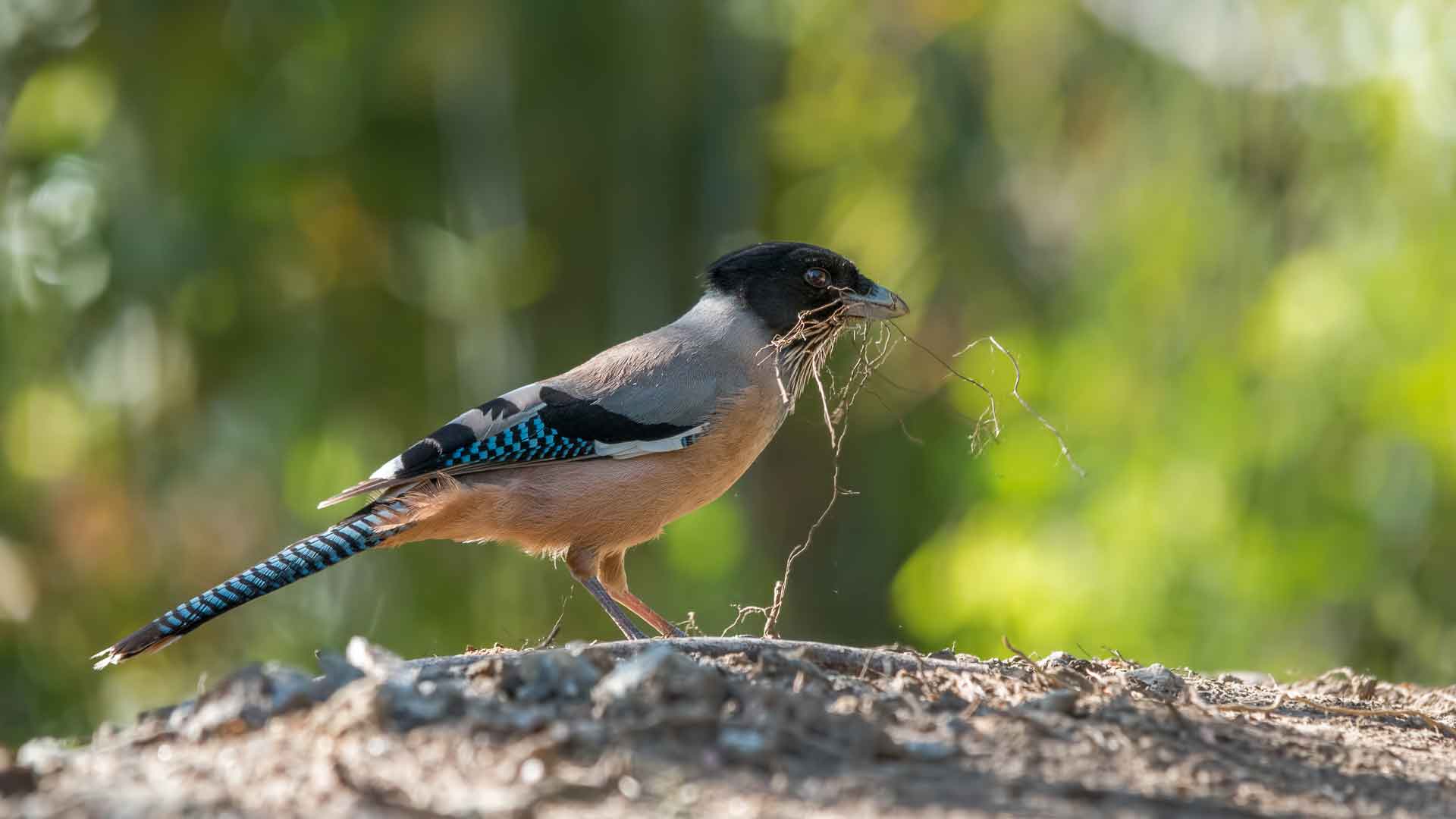 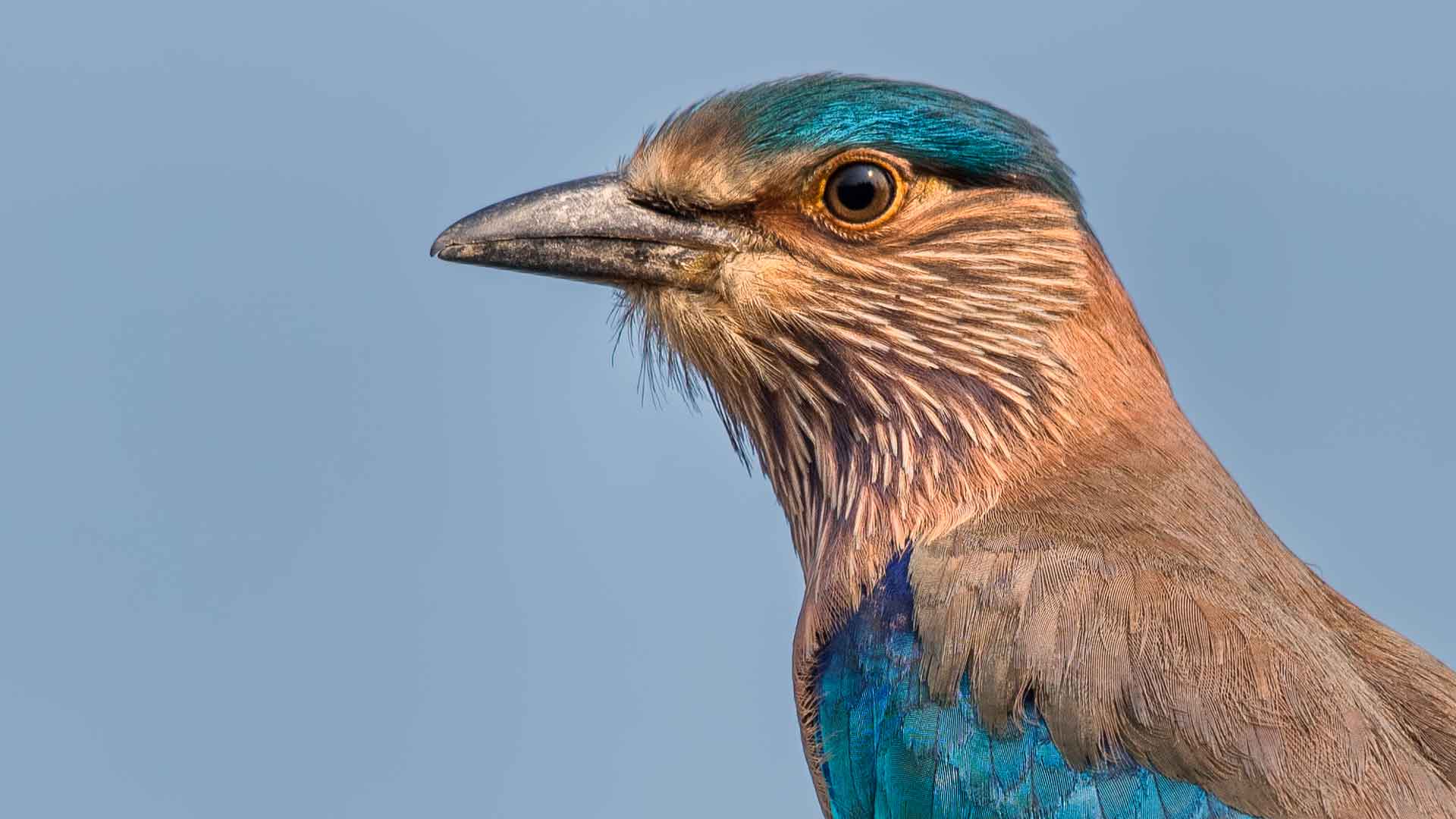 (Left) Usually found in oak, pine, and cedar forests and woodlands, the black-headed jay, seen here in Uttarakhand, is omnivorous like other corvids. It also visits areas around human habitation to feed on discarded food scraps. (Right) The Indian roller prefers open areas, including agricultural landscapes, where it can be seen sitting on exposed perches. The brilliant shades of blue on the bird’s body are more prominent in flight. Photos: Abhishek Das

The larger cousins of the house crows, the large-billed crows, formerly called jungle crows (Corvus macrorhynchos) are glossy all-black all over, deeper voiced, and less commonly found in big cities. Another cosmopolitan member of this family is the rufous treepie (Dendrocitta vagabunda) found both in cities and forests and has a ruthless appetite for other baby birds. In the jungles, the presence of treepies is often a good indicator of a nearby tiger kill, to which they have come, uninvited to share. They are silver-grey, black-white, and buff birds with long tails and are multitoned: they utter a harsh, hoarse, “kitter kitter” call often intermingled with a dulcet “ko-ki-la, ko-ki-la” call and can sometimes ask you if you have any “thocolate”.

The rufous treepie is seen in a wide range of habitats ranging from open scrub and agricultural areas to forests and urban gardens. This adaptable corvid’s long tail and loud musical call make it very conspicuous in these habitats. Photo: Abhishek Das

Rambunctious and exuberant are the Indian rollers (Coracias benghalensis). They are somewhat bristly looking, cinnamon and blue crow-sized birds that often perch on transmission wires in the countryside, looking for insects. Their wings, a startling navy and powder-blue are pure kingfisher colours. Roller gentlemen really lose their heads when they fall in love (between March and June), rocketing up into the sky doing crazy aerobatics and uttering wild love calls of delight to their beloveds. Up in the hills and mountains of the Himalayas live more cousins: rooks, choughs, magpies, and jays.
The glittering red-billed and yellow-billed blue magpies (Urocissa flavirostris, Urocissa erythrohyncha) are residents of the Himalayas. These cobalt-blue, black-and-white birds fly across clearings, their long tails streaming behind them. The black-headed jay (Garrulus lanceolatus) is another smart, cocky hill-station dweller who will not shy of hopping nonchalantly into your verandah looking for a snack with its head cocked inquiringly towards you. 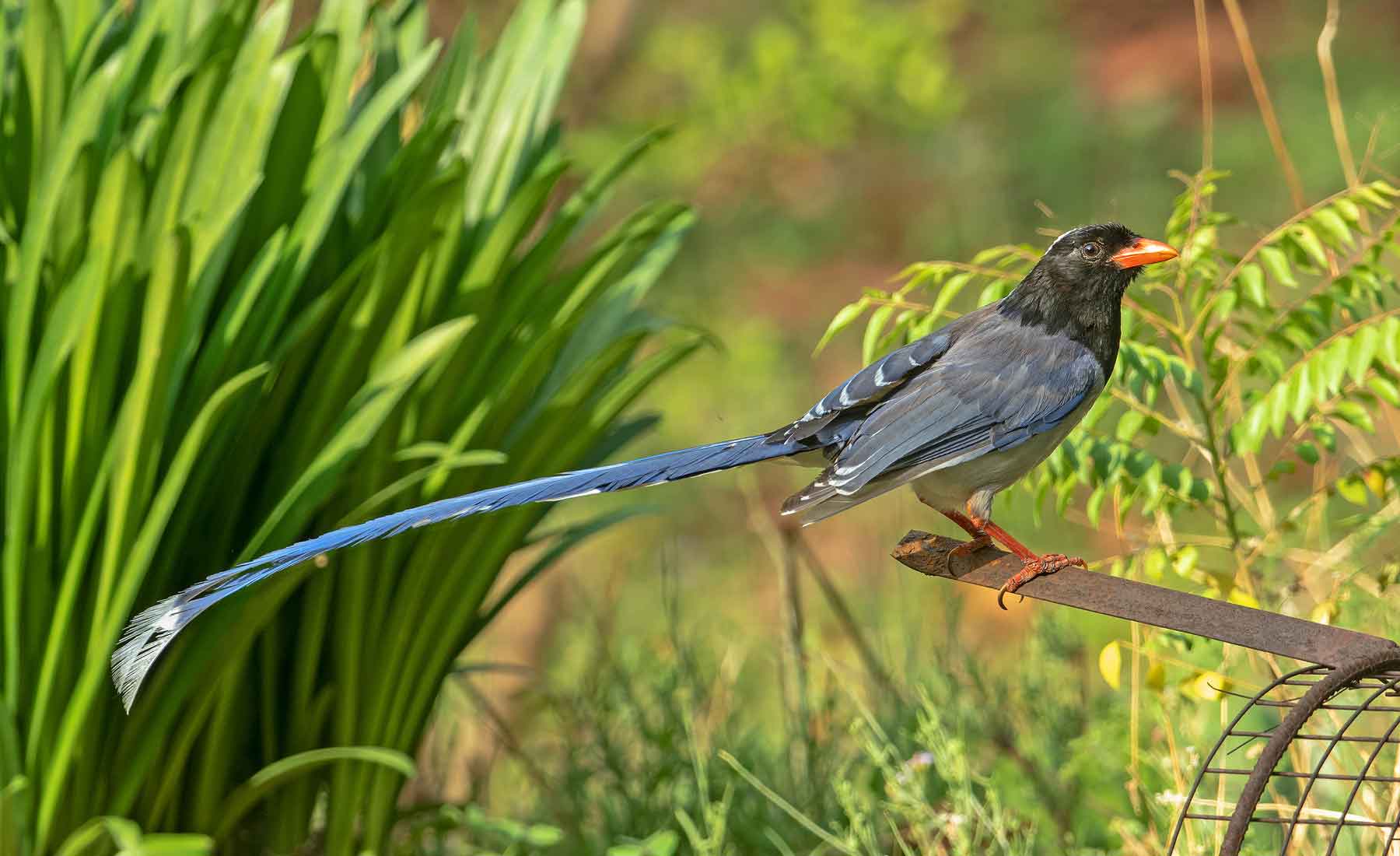 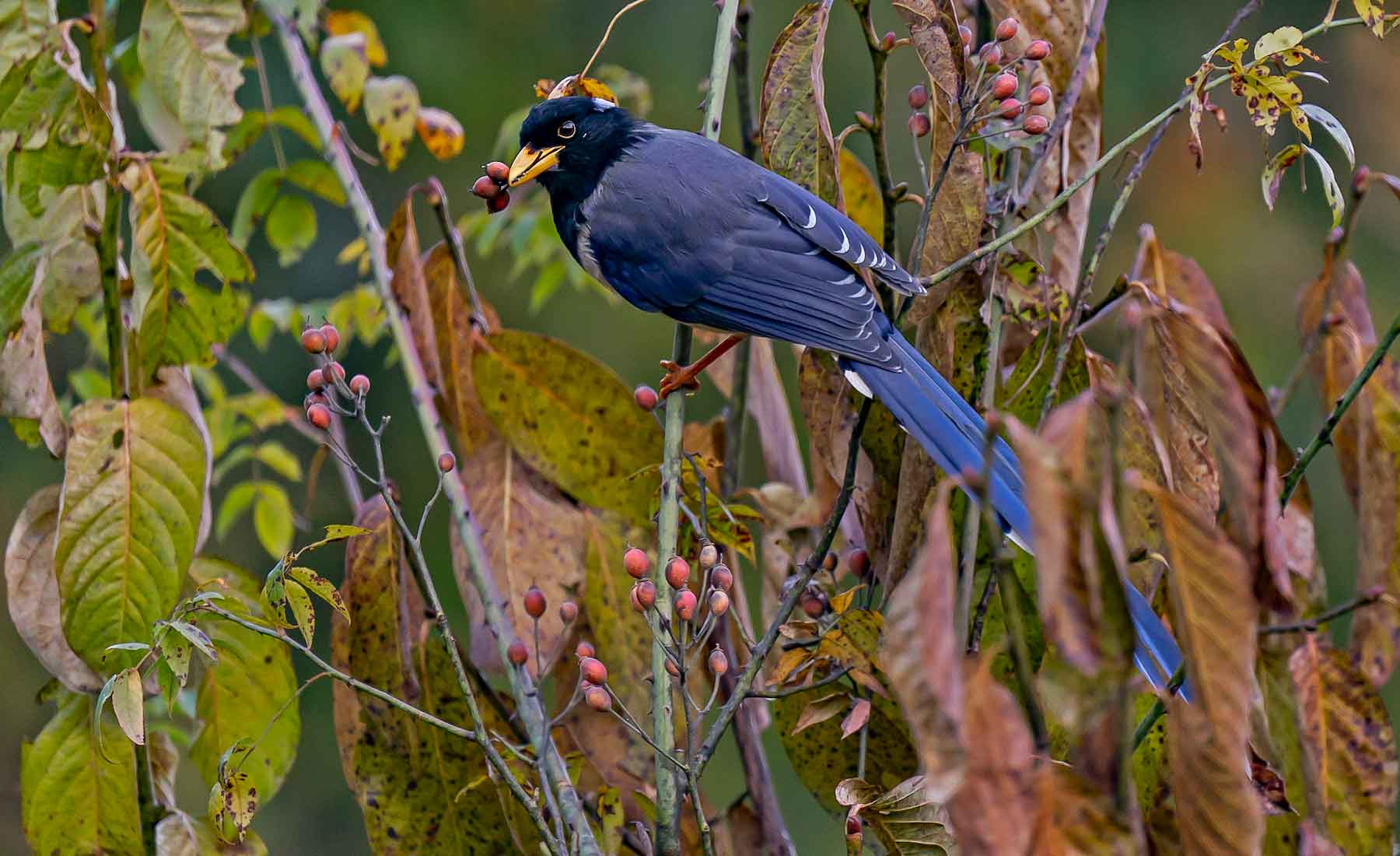 The red-billed (left) and yellow-billed (right) blue magpie are predominantly found in the hill forests of the Himalayas. These corvids usually travel in groups, their long tail trailing behind them in flight. Photos: Aseem Kothiala (left), Dhritiman Mukherjee (right)

If you feel that crows and their ilk have been unfairly persecuted (as vermin), worry not. The British Crown and the realm — and all the loot stashed in the Tower of London — are guarded by a legendary squadron of around six tame jet-black ravens (Corvus corax) living on the premises of the Tower. The existence of ravens on the premises long pre-dates the British Empire as we knew it. It is said that if the ravens go, so will the Crown and the realm. Well, who better to guard ill-gotten gains than those who know how to get them!

Crows may be smarties, with all the swagger of con artists, but they get conned too! Every year, there is consternation in thousands of crow households as cosseted chicks gradually come out of the closet and reveal themselves to be koels (Eudynamys scolopacea), whose wanton biological parents daringly pulled one over this clan of the Corvid Mafiosi by laying eggs in their nests.

Playing Hide and Seek with the Nicobar Megapode