Kheechan in Rajasthan has a fifty-year-long tradition of welcoming and feeding thousands of migratory demoiselle cranes from Eurasia, as they winter in the south 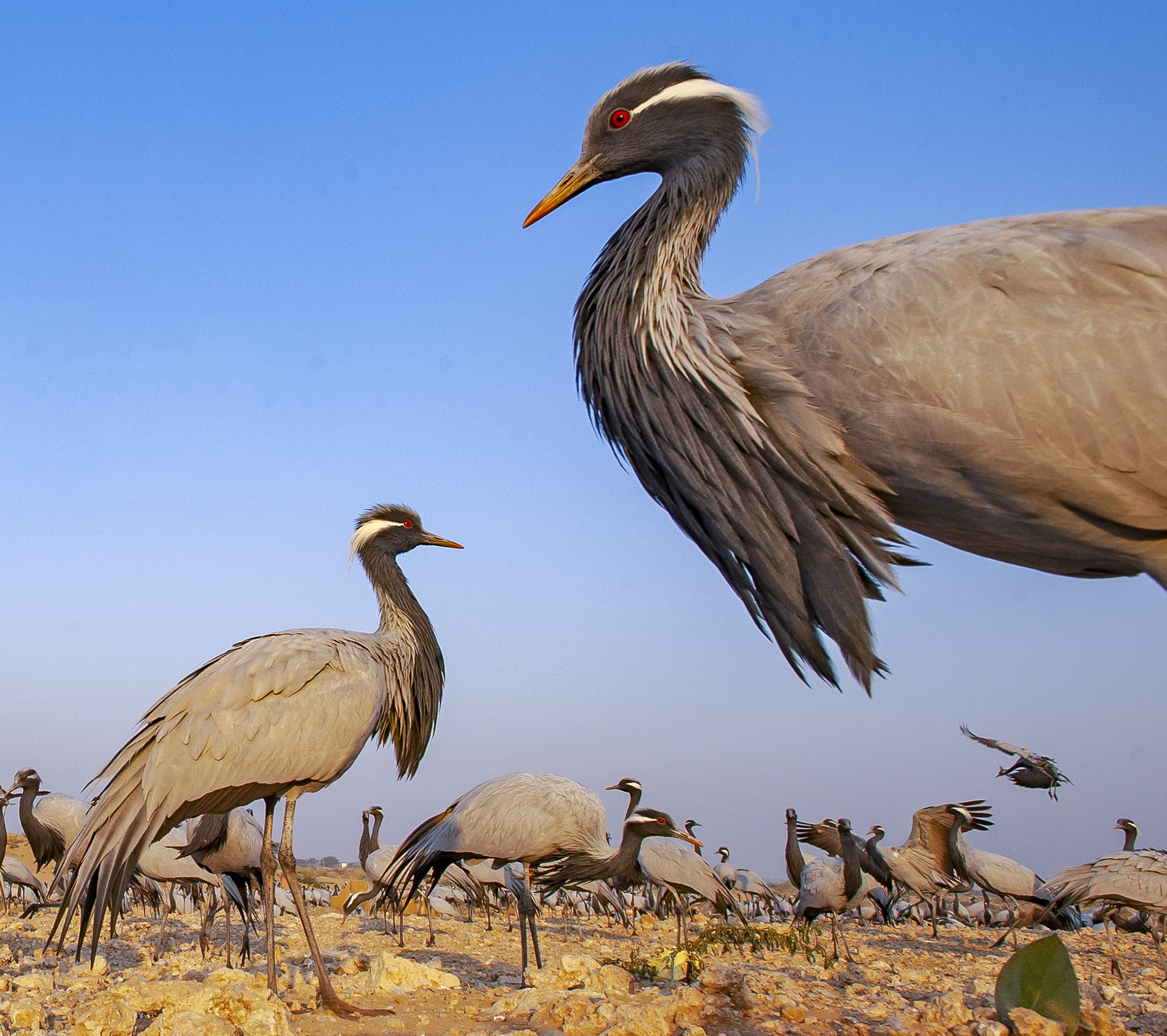 Wings beating down, a lone bird descends gracefully, landing on one outstretched limb. Within seconds, a siege of demoiselle cranes (Anthropoides virgo) follow their one-legged leader, filling the air with their dissonant honking. The cranes pilot to the feeding ground and fill their beaks with grain. From my vantage point, I count 150-170, with more circling the skies.

Every year, demoiselle cranes, the smallest of 15 crane species, travel from their breeding grounds in Eurasia to winter in India, completing an arduous 5,000 km journey in two weeks. Come November, Kheechan, a village on the edge of Thar Desert, welcomes these winged visitors. 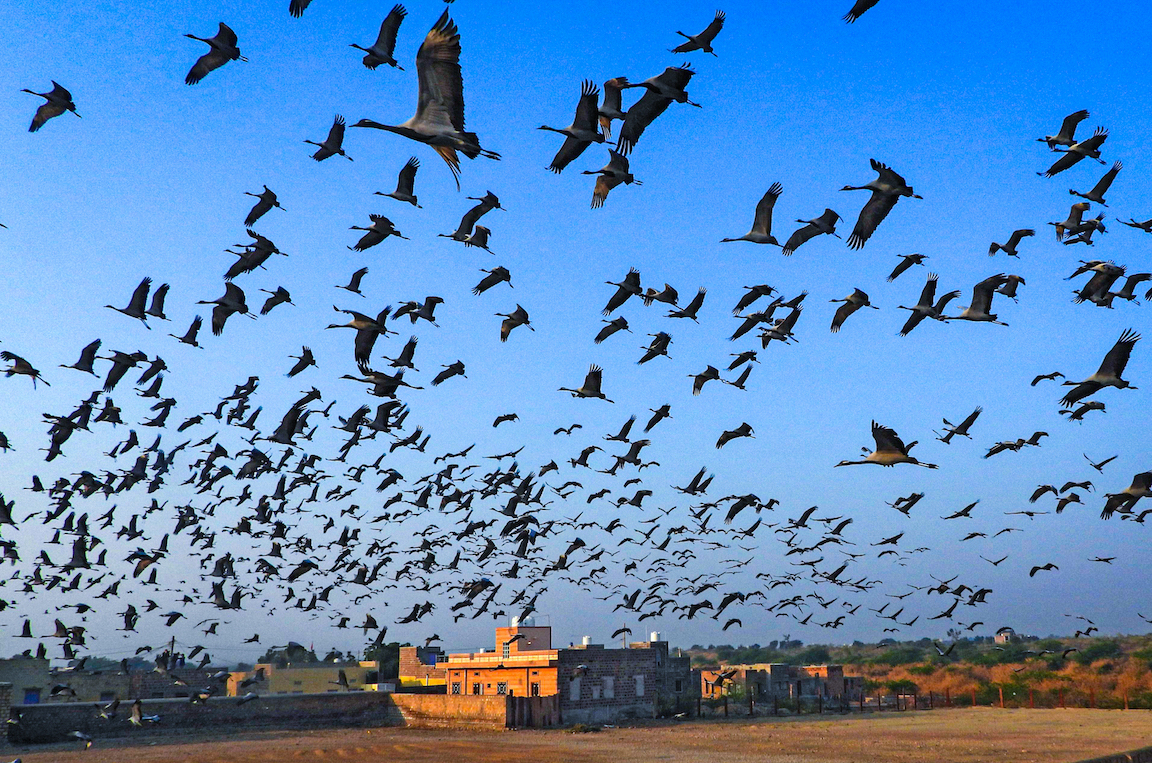 Locally called “kurja”, thousands of demoiselle cranes descend upon Kheechan, a small village in Rajasthan, during the winter. Photo: Surya Ramachandran Cover Photo: The demoiselle crane is a migratory bird that breeds in central Europe and Asia and winters in North Africa, India, and Pakistan. Cover Photo: Dhritiman Mukherjee

I learnt that wealthy Jain traders who had poured their riches into building havelis here, have supported the feeding demoiselle cranes since the 1970s. It began with village elder Ratanlal Maloo, a devout Jain who considered it his religious and moral duty to feed the birds of the village. One September morning he noticed a number of cranes eating in the company of his usual flock of pigeons and sparrows. Every year after that, he would wait for the “kurjas”, lavishing them with grain. Later, he coaxed the panchayat to allot him a piece of land on the outskirts of the village, to establish a “chugga ghar” or a feeding zone. Over time, fellow farmers, traders, and merchants started supporting his cause, donating grain for the birds.

With access to plenty of food and no tangible threat in sight, the cranes returned every year, their numbers increasing from hundreds to thousands. Word spread, and people from different parts of the country came to observe the spectacle. Soon, more contributions flowed in. Apart from running the feeding operation, Ratanlal started rescuing and rehabilitating injured cranes. In 2009, he received the Salim Ali Nature Conservation Award. Two years later, the custodian of the cranes gently slipped away into the night, leaving behind a legacy that continues to shine bright over this desert town.

Captivated by the bird’s delicate appearance, Marie Antoinette of France is said to have named this crane the demoiselle, which means young lady in French. Photo: Dhritiman Mukherjee

“Ratanlalji never had children, but the winged children of God visited him by the thousands each year” says Sevaram, my guide and host for the day. Sevaram and other Kheechan residents have continued the tradition of feeding demoiselle cranes. Occasionally, Sevaram ferries injured cranes to the local hospital. In 2007, when the cranes started getting injured by electric poles and high tension wires around the feeding areas in the village, he took the matter to court. The poles were taken down, and he hopes to get all the electric wires running through Kheechan insulated, in order to protect the cranes. Sevaram also conducts crane awareness workshops for the children of Kheechan and neighbouring villages. In 2008, his sustained activism won him the Wildlife Hero award from Sanctuary Asia, and subsequently, a small grant from Sanctuary’s Mud On Boots project. He plans to use his grant money to buy medicines and paraphernalia for injured cranes.

“The first crane to land looked like it had a leg injury,” I remark to Sevaram. “Yes, for a long time the leader was one “langda” (lame) crane. He was always the first to land and one of his legs always hung limp. Looks like the lame leader has come back,” says Sevaram.

With a faraway look in his eyes and a lowered voice, Sevaram lets me in on a local belief “Many people here pray to the one-legged “kaale Hanuman” and believe the one-legged kurja is the monkey god’s incarnation.” For the people of Kheechan, faith seems to dictate a large part of their relationship with Mother Nature.

Grain offered by locals in Kheechan ensures that these cranes, with their fierce reddish-orange eyes, have a feast every morning. Photo: Surya Ramachandran

Kheechan attracts travellers, ornithologists, birdwatchers, and wildlife photographers. Many of these cranes have been geo-tagged by researchers in Mongolia in an effort to study their migration patterns. “If you look closely you might be able to see bands around some of the crane’s legs,” says Sevaram as the feeding progressed in groups of hundreds.

Those awaiting their turn were patiently perched on a dune a kilometre away. All through the morning, flocks of cranes alternated between the dune and the feeding grounds. Apart from their inherent discipline, what was striking about the birds was their dainty appearance. Just over three feet tall with a five-foot wingspan, these cranes have blue-grey plumage that contrasts with their black neck, head, and legs. Unlike other cranes, demoiselles have long, feathery white plumes or ear tufts that grow from behind bright-red eyes.

Wildlife biologist Dr Suresh Kumar of Wildlife Institute of India specialises in animal ecology, migration, and movement studies, describes these cranes as “skittish”, which he attributes to their smaller size. “Rolling grasslands like the ones in Rajasthan work in their favour, as they can spot predators from far away, and run and take off if need be,” he reasons.

Raptors are the natural predators of demoiselle cranes. When they fly over the Himalayas on their migration route, Himalayan golden eagles may prey on them.

While one flock of cranes gorges at the feeding site at the edge of the village, others wait their turn on a dune nearby. Photo: Dhritiman Mukherjee Below: Demoiselle cranes landing and feeding in Keechan. Video: Surya Ramachandran

According to Dr Kumar, these birds are very social. “It’s very interesting to observe these cranes. One can see that there’s a lot of communication happening within the flock,” he says almost fondly.

Demoiselle cranes mate for life, and their courtship dance is often described as the most balletic of any crane species. Kheechan does not witness this as breeding occurs in Eurasia and the cranes only fly to India once their offspring have grown.

After feeding, the flocks go to the two lakes at the fringe of the village where they nibble on pebbles. According to Dr Kumar, this behaviour is common amongst granivorous birds. Birds that feed primarily on seeds and grains ingest some amount of stones or granules to aid the breakdown of whole grains and ease digestion. Post their afternoon refreshment, just before dusk, the cranes will fly to the salty landscape of Malhar Rinn to roost.

Sevaram estimates that 15,000 birds arrive in Kheechan each year. “But the numbers are fluctuating. Kheechan has become warmer, even the winter months are not as cold as they used to be. Could be that these birds are migrating to other parts where daytime temperatures aren’t that extreme,” he speculates.

Dr Kumar states that without any study on local migration patterns, cause and effect conclusions cannot be drawn. “But since these birds congregate in regions where water is available, a rise in temperatures could lead to drought like situations, which would then cause these cranes to move to areas with better water availability” he reasons.

One threat the feeding ritual seems to have minimised is human-animal conflict. The demoiselle cranes are opportunistic feeders and with them getting all the food they need from the feeding grounds, they do not ravage neighbouring farmlands. While the IUCN places the demoiselle cranes under the “least concern” category, it does recognise threats that these birds face across their range: human intrusion and disturbance, pollution from agricultural effluents, and energy production and mining, among others.

Even as Sevaram enumerates the challenges to crane conservation, behind him stands a village that has fed cranes for over 50 years. Sevaram’s niece who is nearby tells me “I like waking up to the sound of the kurjas. I wait for them every year.” It feels good to know that these birds are going to continue to be supported by the next generation as well. What started out as an act of altruism, in keeping with the religious doctrine of “ahimsa” prescribed in Jainism, had evolved into an ecosystem of science, conservation, and of course, faith. Kheechan, a small village in a chaotic world, with its ritual of caring for cranes gives new meaning to the adage “keeping the faith”. 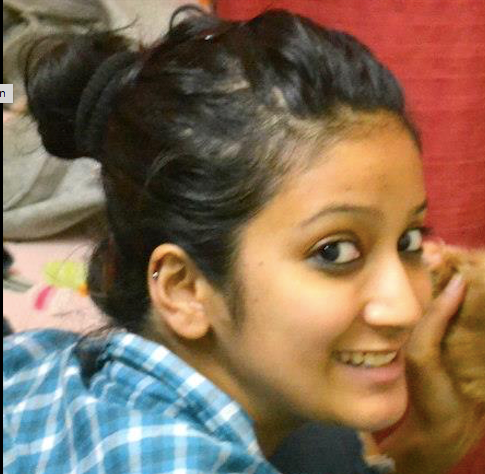 is a nature enthusiast intent on exploring and recording the interplay between society and nature as experienced in our anthropogenic era.