With deep orange eyes, long, luscious neck feathers, and slender legs, the demoiselle crane looks like it is dressed for an elegant party

Like Sanskrit, Urdu and Farsi, French is a sweet language, pleasant to the ear and pleasurable to read. It is a language of love and beauty, so many expressions and idioms that we use come from French. Ornithologically speaking, many bird names, both common and scientific, come from French. One of the most famous names is “demoiselle crane”. Dameisele in archaic French means a pretty, young lady. Damsel is a related word , which has given rise to the term damselfly, a group of fragile members of the Odonata. The more famous Odonata group is dragonfly, appropriately named for their fierce reputation among the small insects they hunt.

The demoiselle crane (Grus virgo) is the smallest among the 15 species of cranes in the world. Its soft beauty is rivalled only by the two species of more exuberant crowned cranes of sub-Saharan Africa. The demoiselle crane is largely grey so not very colourful, but it is delicately built, creating an eye-catching pleasant appearance. Its height is about 90 cm, fifty percent of which are two long thin legs. Its deep orange-red eyes are surrounded by a grey crown and black head — the black extends to the breast feathers and hangs in the form of plumes. Ear tuft of white plumes on either side of the head accentuates its attractiveness. To match the hanging neck and head plumes, the secondary feathers of wings have become elongated, sickle-shaped and droop over the short tail. Unlike many cranes which have bare red patches or wattles, the head of the demoiselle crane is covered with small feathers, further giving it an innocent look. With its elegant smart appearance, an adult demoiselle crane looks as though it is ready for a sophisticated dance party! No wonder the dainty demoiselle crane is admired in literature and poetry. Mughal paintings too have immortalised these beautiful birds. 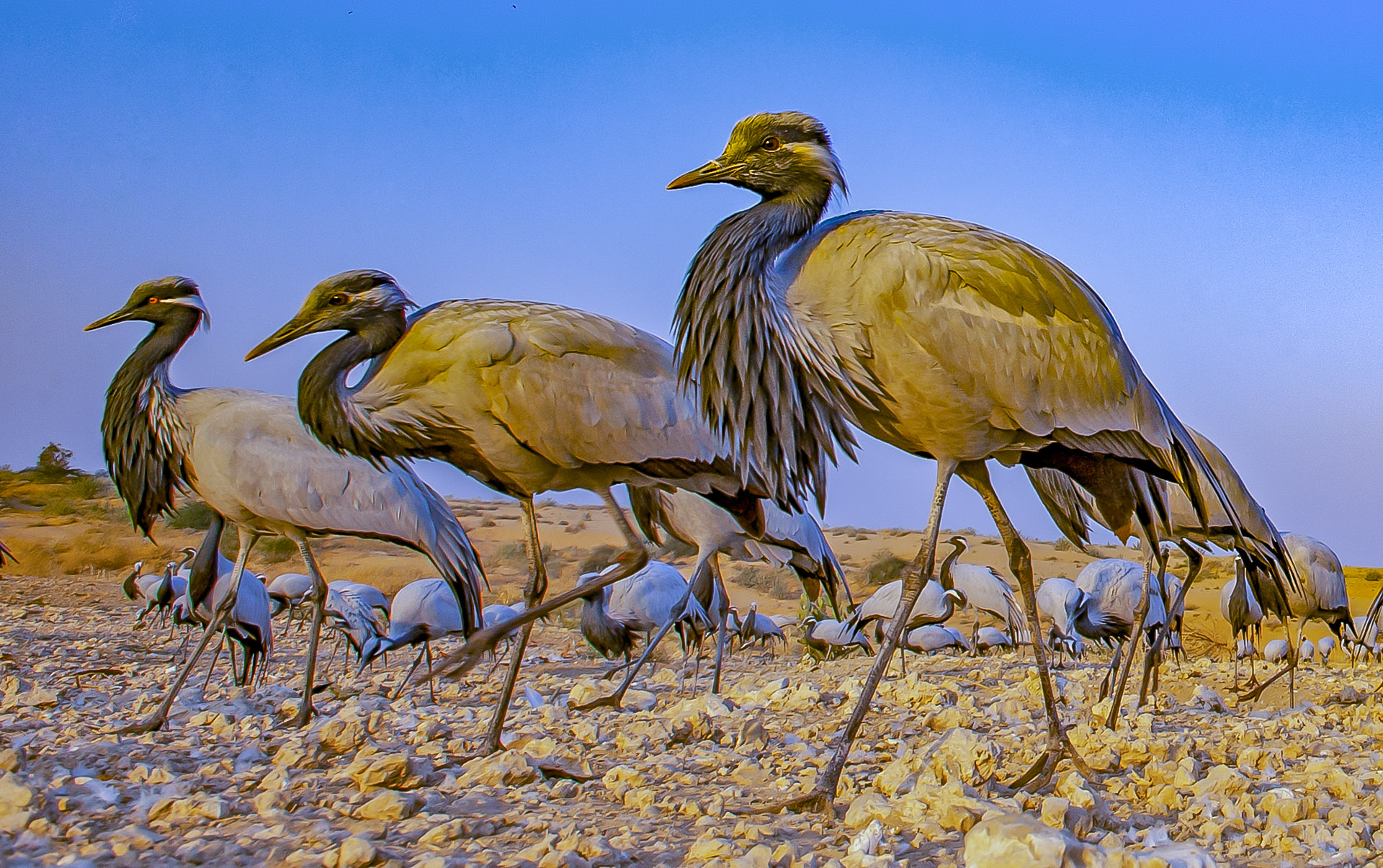 Demoiselle cranes can be extremely social, they fly in large flocks, and congregate in great numbers around feeding grounds where they engage in elaborate dancing rituals among other things. Photo: Dhritiman Mukherjee Cover photo: Demoiselles are formidable fliers — they fly at high altitudes, and over long distances to get to the wintering grounds in India. Cover photo: Dhritiman Mukherjee

The demoiselle crane has a wide breeding and wintering distribution. It breeds in and around Eastern Europe, Central Asia, Mongolia to east China. Small populations are present in Turkey and Morocco. It winters in a wide swath of land from Iran to India, and sub-Saharan Africa. Unlike many cranes which cannot live away from water, the demoiselle crane is equally adapted to wet grasslands, crop fields, savannah, steppes, and streams. If water is available to drink and idle around, it is even found in desert and semi-desert areas — a great example being the Thar Desert.

Kheechan village, 3 km from Phalodi town of Jodhpur has become famous for demoiselle cranes but I have seen huge flocks of a few thousand birds in other areas in Bikaner, Churu, Jalore, Jodhpur and Sri Ganganagar districts. The only condition is that a waterbody should be nearby. They may forage in the crop fields and grasslands, or eat grains provided by villagers but they have to go to the waterbody to drink and socialise, and just hang around. Even in Kheechan, the nearby waterbodies are as important as the chugga ghar where grain is provided. Without the waterbody, not many cranes will be found as it happened in 1987 during a severe drought. I remember, my birdwatcher friends in Goa telephoning me excitedly that a large number of demoiselle cranes had come to their small state. The reason behind that unexpected visit was that Rajasthan, Madhya Pradesh and Gujarat — the main crane areas, were facing a severe three-year drought and most of the waterbodies had dried up, forcing the cranes to move further south.

During their long migration of 3-4 thousand kilometres, sometimes they stop in unexpected areas.In October 2007, nearly eight thousand cranes landed in the crop fields of BNHS member Dr.Jaswant Singh Kaler near Bhira, Lakhimpur-Kheri district in Uttar Pradesh delighting birdwatchers like Fazlur Rahman who immediately contacted me. The Uttar Pradesh Forest Department did a commendable job by posting six forest guards in the area to prevent criminal poachers from harming the unexpected guests. The cranes enjoyed the hospitality of the UP government and villagers for a month and then decided to leave for their usual haunts in Gujarat and Rajasthan. Every year cranes are seen or heard flying over Uttar Pradesh in October but to the best of my knowledge, I don’t think they made a pit-stop in UP again after that.

In the breeding areas, demoiselle cranes live in scattered pairs generally near wetlands or tall grasses where they make discreet nests to avoid the ground predators. In Mongolia, sometimes they nest close to portable round tents, called yurts, of nomads as large predators like wolves do not come near human dwellings. Two to three eggs are laid and both parents take part in incubation and raising of chicks. Generally, only one chick survives and this chick follows the parents even to the wintering ground. The juvenile can be distinguished by its completely grey head, browner neck (not black) and shorter neck plumes. The flight feathers are also grey. It can also be identified by its characteristic contact call. It moves and flies with parents and soon learns the tricks to survive “crane-hood”, and also the migratory route. When the next breeding season comes, previous year’s juvenile is kicked out to lead an independent life. In two to three years, it is ready to raise its own family. They are said to pair for life but if one dies, the survivor soon gets a new partner.

Large windmills or turbines can pose a danger to demoiselle cranes that fly close to them. Photo: Dr. Raju Kasambe/CC BY-SA 4.0
The sleepy village of Kheechan comes alive every year with the arrival of the demoiselle cranes. Pictured above is a demoiselle crane feeding centre in the village. Video: Surya Ramachandran

India perhaps gets hundreds of thousands demoiselle cranes with Saurashtra in Gujarat beingthe main rendezvous spot. In Jamnagar, I have seen flocks consisting of 40-50 thousand birds. Unfortunately, many birds are shot in Pakistan, and a larger number of birds die after hitting the mesh of powerlines that now criss-cross their feeding areas. In a very unfortunate incident in Khadir area of Kutch, more than 400 cranes were found killed by powerlines in 2010. A few years earlier, 30 cranes died in Bhavnagar district. Pesticide poisoning is another threat faced by cranes and other species. For instance, in January 2020, fifteen cranes died after eating poisoned grains, including the one that was tagged in Mongolia for research.

Mongolia is a part of the “1,000 Crane Project” which aims to study the movement of cranes in range countries for many years. As cranes live for 20-30 years, scientists are expecting to study cranes’ movement, sociality, breeding success and impact of climate change. Powerlines, poaching and poisoning jeopardise such noble studies. In India, Dr. Suresh Kumar of Wildlife Institute of India has also started a project to study the impact of powerlines on two migratory cranes and other large birds. He has already tagged one Common Crane Grus grus with a satellite tag and hopes to tag four demoiselle cranes and nine common cranes for the same purpose. Let us hope this will give us good data to protect the cranes from powerlines and other threats in the future.

is an ornithologist and conservationist, former Director of BNHS, and currently the scientific adviser to The Corbett Foundation, and governing council member of Wetlands International, South Asia