Foxy Tales: Look Before You Leap

In the Kutch district of Gujarat, the clever desert fox survives a harsh habitat and outsmarts those who pursue it

There is nothing much around us, but the vast Rann, a marshy landscape with a crust of salt, dried mud, and bushes of Suaeda, a succulent shrub that grows well in highly saline soil. On one side lies the Great Rann, and on the other, the Little Rann. Within this harsh water-inundated land in the Kutch district of Gujarat, we are in the Banni grasslands, territory of the desert fox. This was once considered one of the largest grasslands in India, and home to a number of animals, birds, and people with their indigenous breeds of livestock. Amidst the medley of beings using this space, foxes have been the most elusive, despite living so close to humans. When my researcher friends, colleagues, and I entered this landscape for our work, we were eager to observe the desert fox. The foxes, however, aren’t that eager to see us. These cunning kings of their territory, shoot in and out of their dens, and scuttle away in a flash. 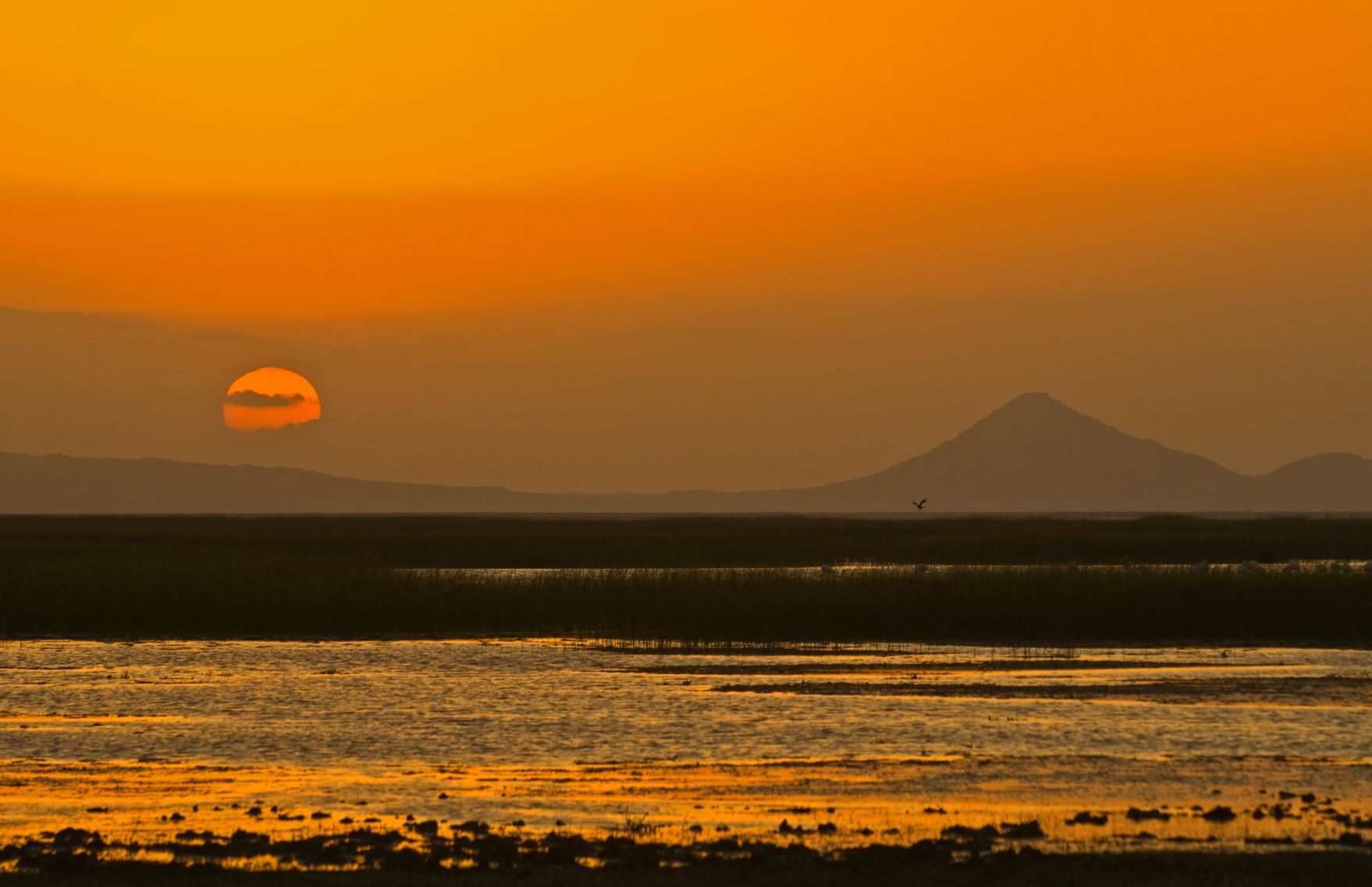 The white-footed fox or desert fox (Vulpes vulpes pusilla) is a subspecies of the red fox which is found in parts of India, Iran, Iraq, and Pakistan. This fox has a reddish coat and light-coloured feet, which sometimes look like socks. Most prominent is the white tip at the end of its very long, bushy tail. In comparison, the other species of fox in the region, the Indian fox (Vulpes bengalensis), does not have a white patch on the tail, and is smaller in size. With its large ears and a narrow face, the desert fox is unmistakable, once sighted.

Sighting it, however, is not easy amidst the dry environment of the desert, as the arid land matches with its coat. Even once spotted, it is difficult to follow this fox, which is very quick on its feet. The foxes in the Banni grasslands live in burrows made in the soft ground, often at the edge of the Rann, the highly saline habitat found on the fringes of Kutch, bordering Pakistan. Their burrows have a maze of tunnels within them with multiple entries. I have counted eight entrances to one such burrow. Foxes can quickly hide inside their burrows when they sense danger, and come out of it from a totally different direction. The desert fox doesn’t have many predators, but it does compete for food resources with animals like the desert cat and jackal. 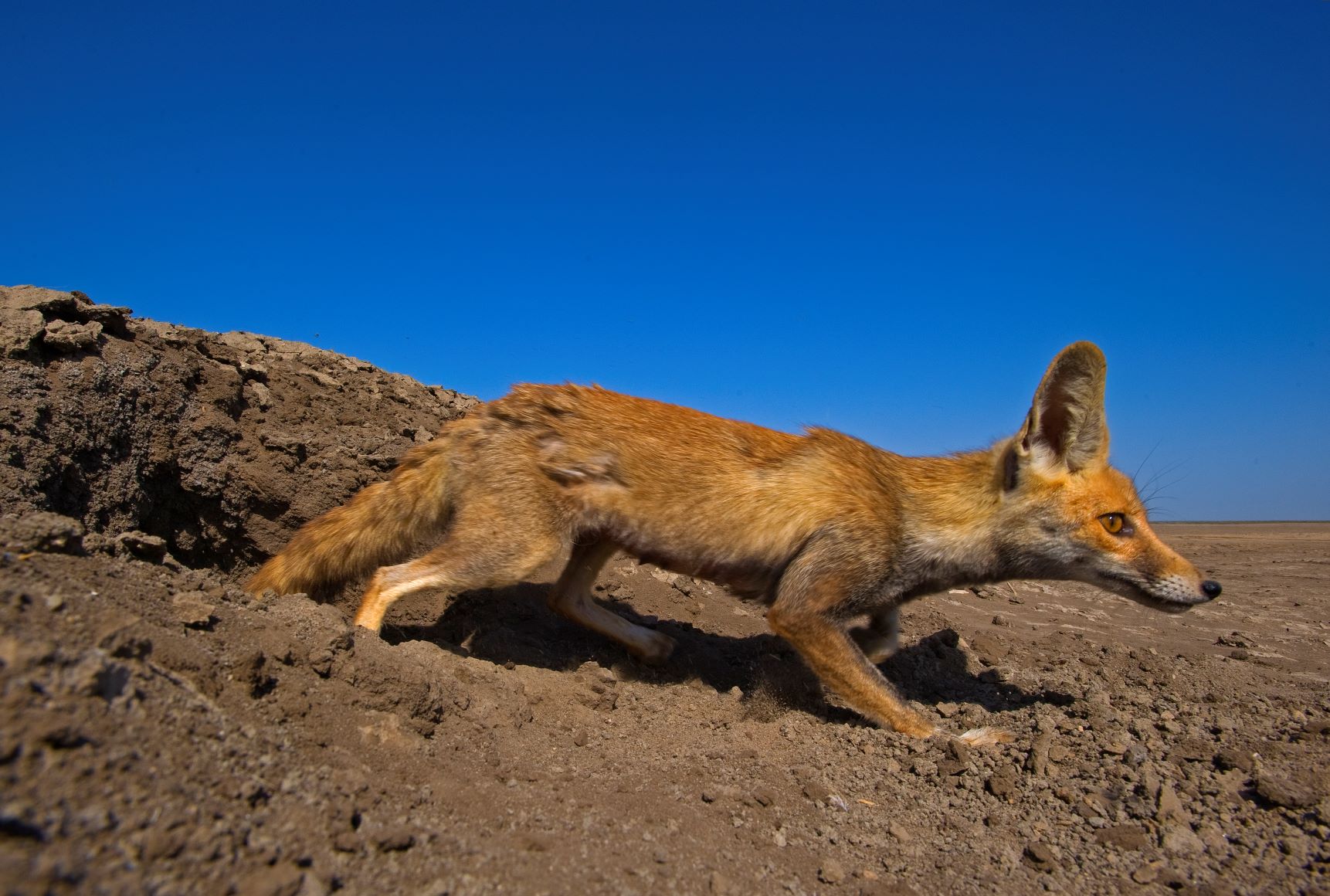 Desert foxes are very small, measuring only about 30-40 cm in height. They are quick and agile and can dive into and come out of their burrows without being noticed. Photo: Dhritiman Mukherjee

Often seen in British gardens, the red fox is not so exotic to humans. Foxes, in general, also appear in numerous folktales that we read growing up. Every time I am in fox territory in Banni, I remember one of Aesop’s fables. It goes something like this: One day, a fox falls inside a well while he is running around in the dark. The well is too tall to jump out of, and he is stuck. He soon realises that any attempts of getting out by himself are of no use. Night passes. In the morning, a thirsty goat walks by the well, sees the fox in the well and starts talking to him. The fox tells the goat how sweet the water in that well tastes and invites it in. Listening to him, the goat jumps in to quench its thirst, only to give the cunning fox a chance to jump on its back and get out of the well. The goat pleads with the fox for help. The fox doesn’t return with help after getting out, and instead tells the goat that if it had as much intelligence as the number of hair in its beard, it should have thought of how to get out of the well before jumping in. The moral of the story is ‘look before you leap’. In Banni, this is also a lesson we learnt the hard way.

Here is how the fox taught us this in real life. One of the researchers in the team was studying the den site selection of foxes and would often travel to remote areas within the landscape to conduct some habitat surveys. One day, I got a call, asking me to fetch a tractor to rescue our field vehicle which was stuck. I asked for its location and learnt that it was around eight kilometres off the path near the Rann. My friends within the local community arranged for the tractor from one of the main settlements. Tractors are used in Banni not so much for farming, but to uproot Prosopis juliflora trees for making charcoal. Originally from the South America, these trees were introduced here a few decades ago by the government, to stop increased desertification. The trees have now spread to more than half of the landscape, taking over native grasses, shrubs, and trees. It is now used by the people to make charcoal which is sold to industries in Gujarat and other states. Generally, those in the charcoal business are the ones with tractors in Banni. We were offered one to help us out.

The surface of the Rann looks deceivingly solid enough to drive on, but a vehicle can quickly sink into soft sand. Photo: Ovee Thorat

When we reached our field vehicle a few hours later, we saw that our Bolero Camper, was half sunk in the sticky, salty mud of the Rann. This part of the Rann develops a thin layer of salt in summers after a shallow waterbody evaporates. It almost looks like a frozen lake, which makes it one of the most beautiful sites in the desert, parts of which are now used for tourism. However, this beautiful Rann is also a death trap, as the thin layer of salt makes the ground look firm when in reality it is still mushy below. “How did you drive here, why didn’t you see how dangerous this area is?” was the first thing I said to my friend, who lay next to a mud mound, in the tiniest amount of shade he could find under the blazing-hot summer sun of Kutch. “We went after a fox”, he replied red-faced. They had seen a desert fox at a distance, an uncommon sighting, and had driven behind it, wanting to get a closer look, only to get stuck. “We tried for hours to get out, but couldn’t. And all this time, that fox was there looking at us from his safe place, almost laughing at us,” he added.

Desert fox pups, which are blind at birth, will be cared for by parents for at least a month or two. A few weeks after birth they start venturing out into the open, under supervision, to explore, play with siblings, and attempt to catch small prey. Photo: Dhritiman Mukherjee

We tried our best to get our vehicle out of the mess. Unfortunately, the tractor we had brought also got stuck in the attempt. Then, we had to get another tractor the next day, which came supplied with water and food for the people who were stuck. The second tractor was used to take out the first tractor and the vehicle as well. We finally returned to base a little embarrassed. The person who owned the tractor quoted Rs 10,000 for using his tractors, after all they had lost more than a day of work in the process of getting us out.

That was the first time I thought of the tale of the fox and the goat and how it had come true, but it was not the only time. Coming across a fox in Banni has often been associated with us getting lost or getting stuck in places, and over the last few years we have had our fair share of such instances and adventures. Even the people in Banni, especially the pastoralists, believe that the fox is one of the shrewdest animals, and one that cannot be caught. They have stories and songs about the clever fox who manages to slip away while others fall into its trap.

Some foxes live quite close to settlements, their long screeches and barks during breeding season break the silence of the night. People there say, “See, the lover of the jackals has come calling for them.” In Banni, this call is associated with vixens, female foxes, which are known to mate with other male canids. Even though foxes live so close to people, their lives are filled with mysteries and fables. The relationship between jackals, foxes, and dogs in this landscape is something that we still don’t know well. The fox manages to escape our attempts to understand it better, as it lives successfully in one of the harshest of environments in the country. 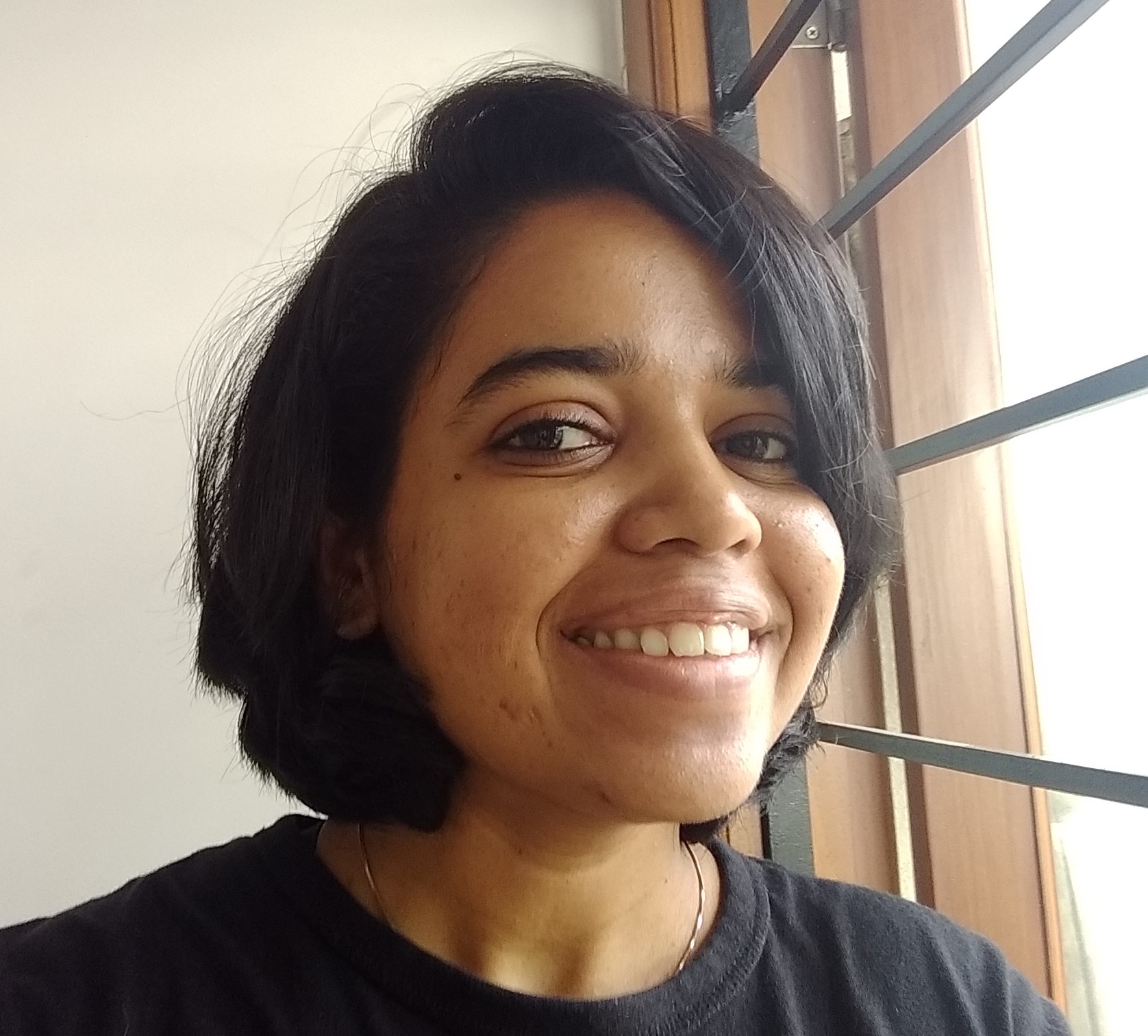 is doing her PhD from Ashoka Trust for Research in Ecology and the Environment (ATREE), Bangalore. The focus of her thesis is politics of grassland conservation and pastoral development in Banni.