Even tigers are wary of the Indian wild dog, yet their survival is seriously threatened 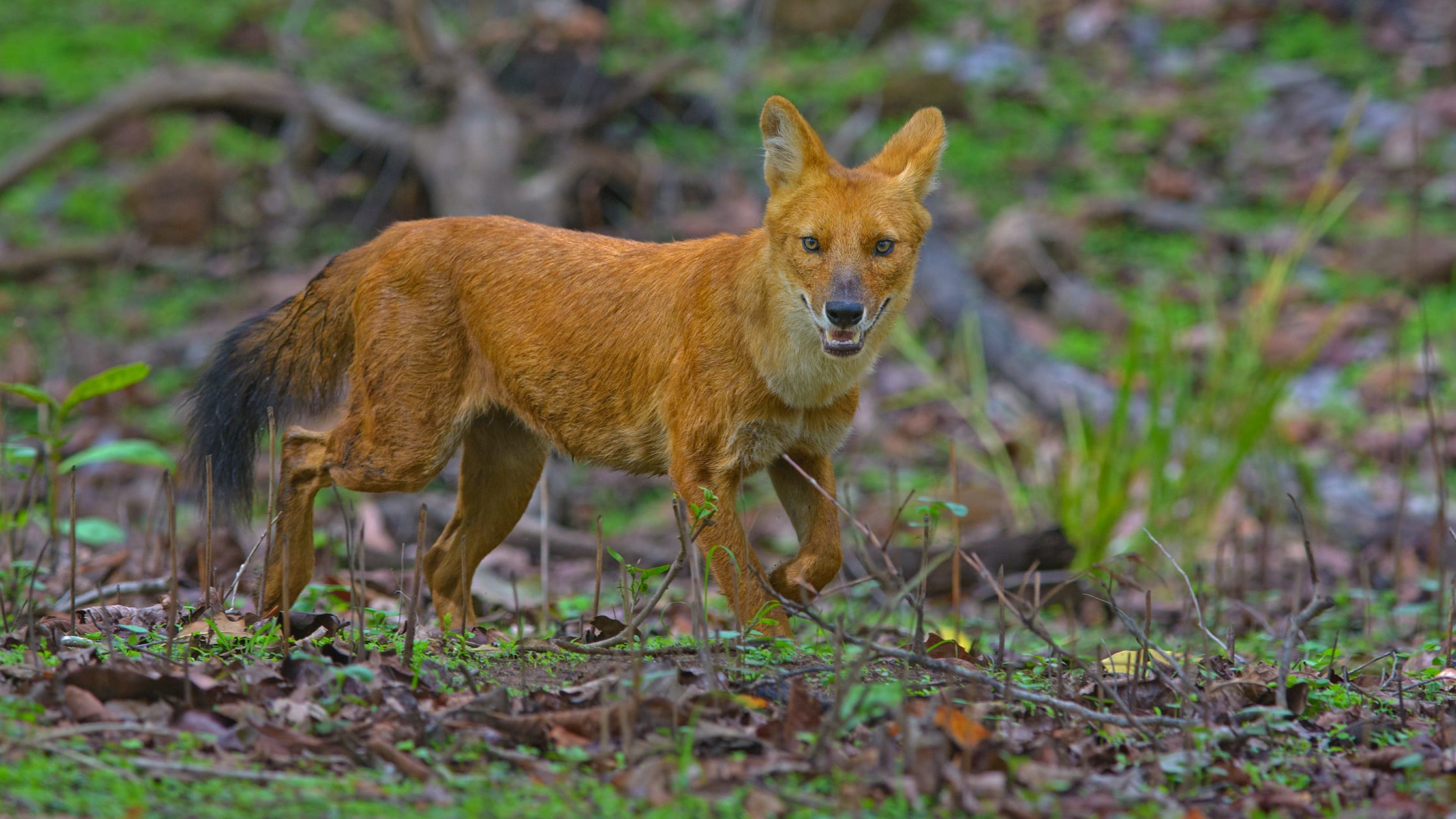 It’s a dog that doesn’t bark. Sporting a long, bushy tail and lean frame the dhole, or Indian wild dog, is a handsome creature. Sadly, this graceful canine, with a short muzzle and red fur coat, has been much maligned for the better part of the last century.

Dholes once inhabited numerous Asian countries from Russia to South Korea. Now found only in the southern part of India, mostly in the Western Ghats, the dhole largely inhabits forested tracts where it can exercise its excellent hunting skills. Dholes are social animals that live in packs of up to 20 members. Clans have multiple breeding females and intragroup fights are rare. They are less territorial than wolves and do not display any dominance hierarchy. They are communal hunters who are active in the day, and roam in teams of five or less, preying on medium-to large-sized animals like deer, hare, wild boar, goat, and cattle. Once their prey is caught, dholes show a very remarkable behaviour trait for a wild animal: They let the pups and younger ones feed before the rest of the clan gets its share. While they are serious hunters and carnivores, it isn’t uncommon to see dholes feasting on fruits and berries, and occasionally eating grasses and herbs.

The Indian wild dog is slender and athletic in build, and fearless and adventurous in character.

Dholes are known to communicate using distinct sounds not associated with the domestic dogs we know so well. When they are teaming up and attacking prey, they make a “kaka-kaka”sound, almost like the screech of a bird. They are also often heard making “coo-coo”and whistling sounds to communicate with each other, which is why they are also called “whistling dogs”.

Teamwork, speed and fearlessness are at the core of their character. Their confidence in their clan is evident when they are out hunting together. Dholes have been known to attack tigers, when the occasion demanded, and the striped cat normally stays clear of them. Leopards however are their sworn enemies as they are known to attack dholes.

Many myths about the dhole’s behaviour led to them being persecuted and their population has been decimated by humans.

It is astonishing that an animal that is so agile, cooperative, and successful at taking down prey is actually facing extinction, with less than 2,500 left in the wild. Dholes once roamed the length and breadth of the India. But they have been systematically killed by humans for a variety of reasons for over a hundred years. Arguments for this decimation have been based on erroneous presumptions of their excessive aggressiveness and their alleged lack of utility in the ecosystem. They were hunted for their fur and pelts, poisoned to protect livestock, and killed under the assumption that they caused the depletion of a forest’s game population.

Dholes work best in teams. Together they can attack and pull down prey several times their size.

It is only from the 1970s that dholes have been listed as an endangered species and are protected under the Wildlife Protection Act, 1972. Conservation programmes are now desperately trying to revive their low numbers. In July 2018, a research group in Kanha finally managed to attach a satellite linked tracking device on a female. The Indian government has sanctioned its first dhole conservation breeding centre at the Indira Gandhi Zoological Park in Visakhapatnam. All these efforts will hopefully help protect this beautiful animal. 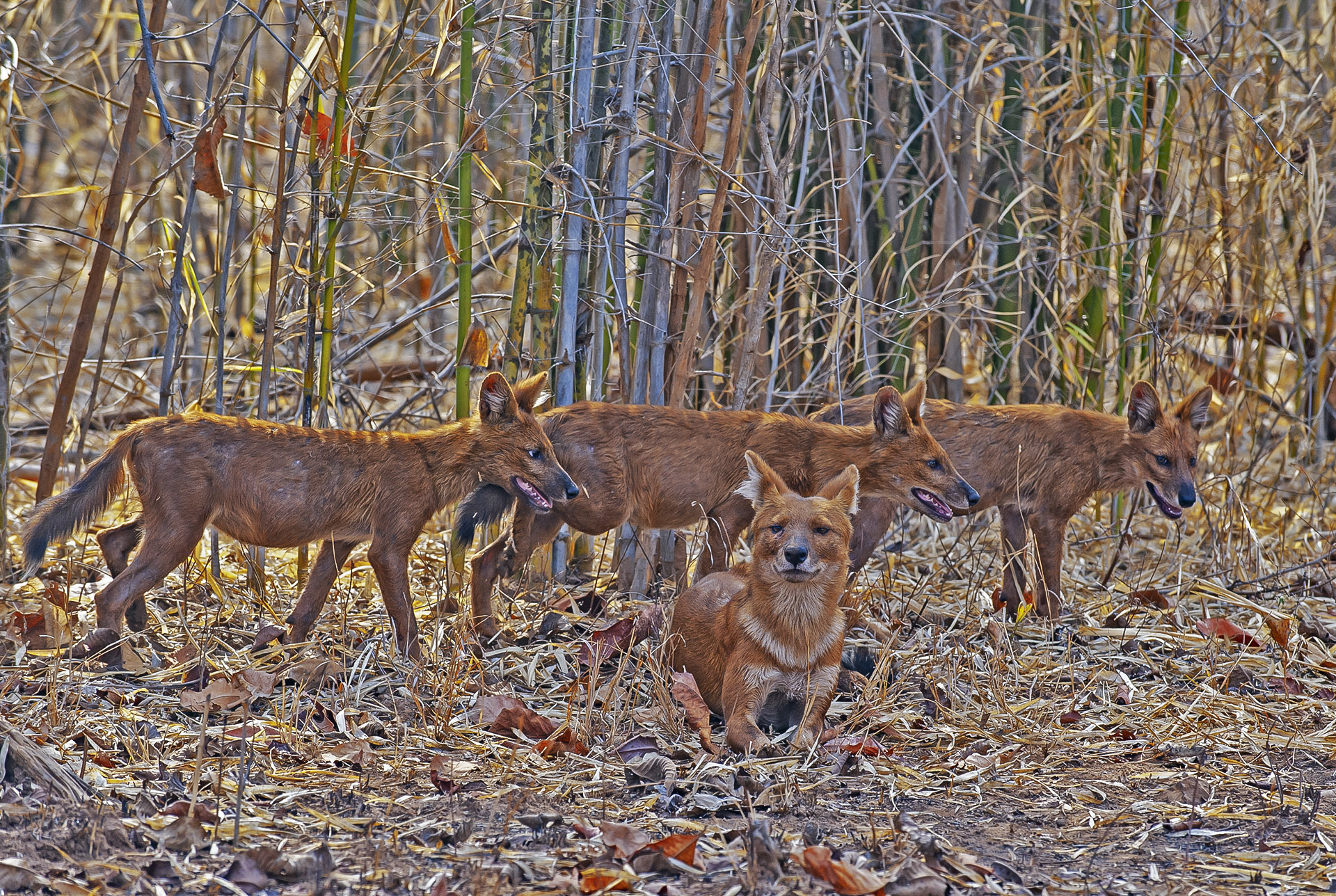 With severe habitat loss dholes have been known to come into areas occupied by humans, though their favoured playground remains the jungle.

Dholes have a thick, woolly coat in the winter that sheds to a coarser, thinner coat in the summer.

Only the very lucky safari goer sights the rare Indian wild dog. To give spotting these creatures in the wild a shot, target a visit to one of these southern national parks: Bandipur, Periyar, or Nagarole. Alternatively, Tadoba National Park in Maharashtra and Kanha National Park in Madhya Pradesh are also recommended sites.