Dog-faced Water Snake: Sludge and Salt in the Intertidal Zone

With their home in coastal mangroves, South Asian bokadams have adapted to sidewinding their way through the murk and slush of their watery habitat 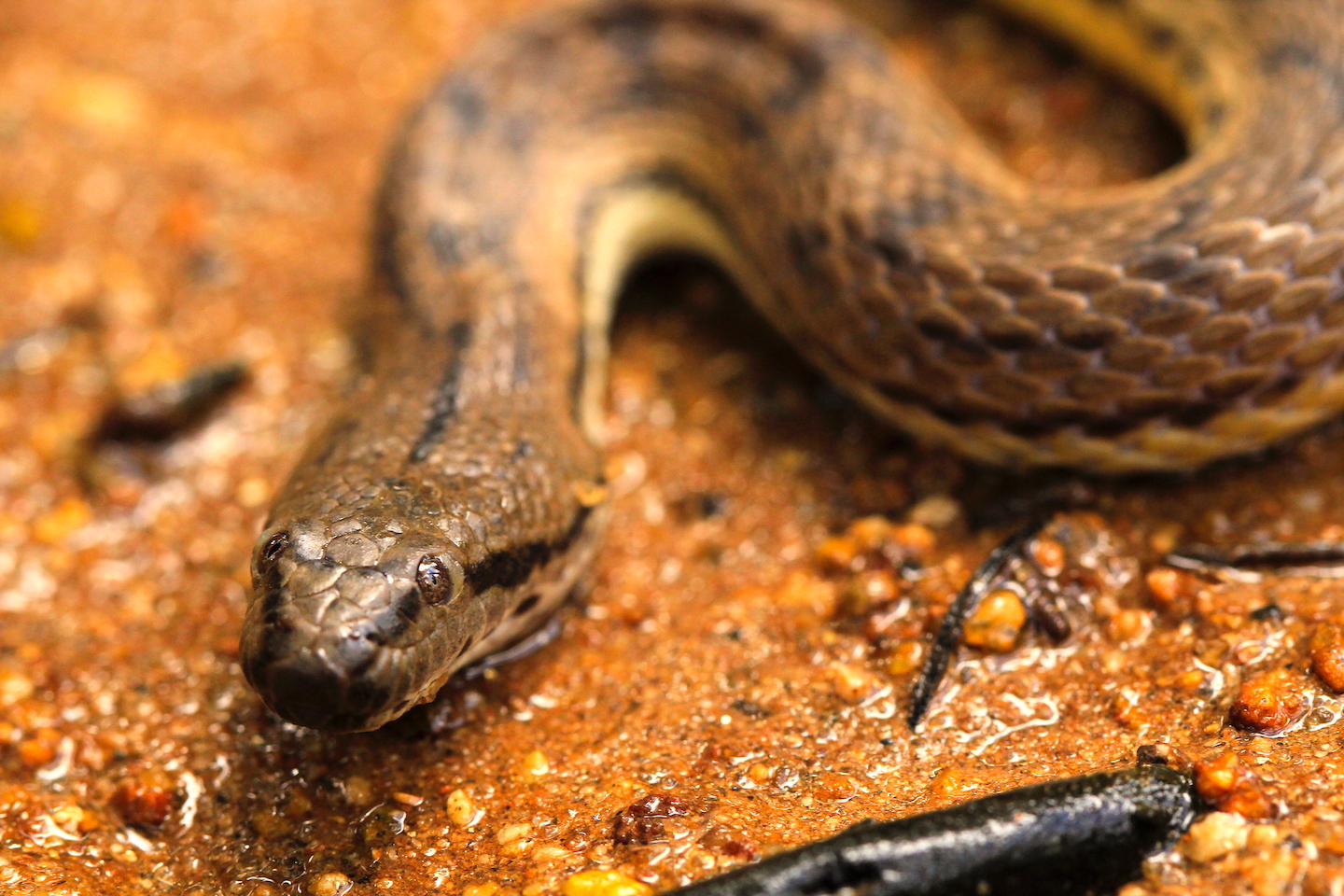 With the onset of the low tide in the mangrove creeks of the Sundarbans, the waters recede and the wet and sludgy shores come alive with species racing to feed, mate, or move from place to place before the tide returns. Fiddler crabs scuttle about feeding and jousting, while birds swoop in to catch fish trapped in small puddles. Snails and other invertebrates feed on the bounteous remains left behind from the high tide, and mudskippers use this time to eat and engage in courtship displays.

Many species have adapted to this daily cycle of living, feeding, hiding, and thriving in this environment. The dog-faced water snake (Cerberus rynchops) is one of these specialists. Although the species occurs in coastal waters from southern Pakistan all the way to western Thailand, it is not a particularly well-known snake. First described to science in 1799, the species was thought to extend all the way to Western Australia. However, more recent taxonomy has split the genus into five species.

The dog-faced water snake we find in India is also called the South Asian bokadam, a name that was at the root of an interesting debate. The Australian bokadam (Cerberus australis), found only in Australia and Papua New Guinea, had the same name and some believed that this was a name shared between two distinct human populations — the Telugu speaking inhabitants of the Coromandel Coast and Australian Aborigines — who had never met!

In reality, burada (mud) bokadam (water snake/eel) is what the dog-faced water snake is called in Telugu. This name was mentioned on a few separate occasions in some older literature, and it seems that early Australian herpetologists simply picked it up and used the same name.

The keels on the snake’s scales are believed to help it gain more traction in water and marshy habitats. Photo: RealityImages/Shutterstock A compressed snout gives the bokadam the appearance of a dog’s face, earning it the more popular name dog-faced water snake. Photo: Gerry Martin

Interestingly, the Telugu name does actually describe this snake very well. Cerberus rynchops belongs to the family Homalopsidae or mud snakes, referring to a group of over 50 species from nearly 30 genera that inhabit muddy wetlands. They often choose the bed of the waterbody to reside in, and thrive in its murk. It gives them enough cover to hunt as well as hide from predators.

In coastal tidal waters, bokadams are able to find plenty of food. They feed eagerly, and are triggered by movement near them. They grab at fish, eels, and other small prey that swim past them. They can often be seen sticking their bodies out from holes in mangrove creek beds, waiting for prey to come near. They also actively forage at night. During low tide, there are often numerous individuals hunting around one small pool, especially if there is a high density of fish trapped in these tidal puddles.

The species is well adapted to life in a wet, muddy habitat. Dog-faced water snakes have their nostrils higher up on their slightly upturned snouts; this feature is what gives them a dog-like appearance. You might need to use a little imagination to see the resemblance, though! Their eyes are also bulbous and place higher up on the head. These adaptations allow them to stay submerged and hidden while still breathing and watching for prey or predators. 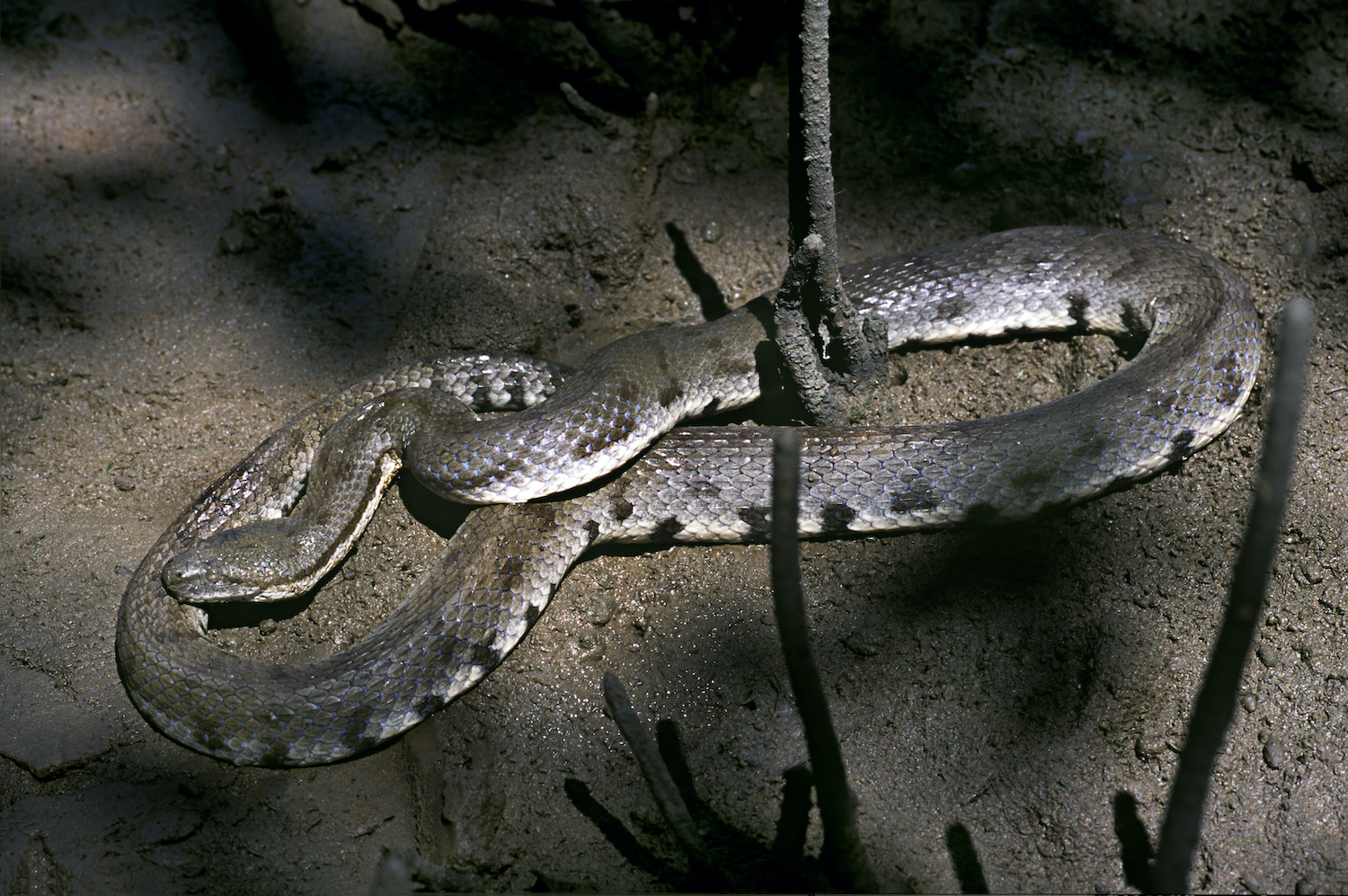 Dog-faced water snakes have strongly keeled scales, which gives them more traction in their watery habitats. They have even adopted a sidewinding movement to travel over the slush. This adaptation is also seen in other snakes that live on substrates with very little traction and purchase, like sidewinder snakes on sand dunes.

Like many other snakes that live in brackish and marine ecosystems, the dog-faced water snake seems to have a high tolerance for salt. They are dependent on rainwater to drink fresh water whenever possible. However, they also drink saline water and when they’ve had too much of it, a salt gland, located below the upper lip in front of the upper jaw gets activated, and enables them to dispose of excess salt. Salt glands are present in many reptiles that live in similar habitats, but it is positioned uniquely in dog-faced water snakes.

In temperament, the dog-faced water snake is gentle mannered and doesn’t bite much. However, when it does bite, for instance if handled poorly or troubled too much, it will bite repeatedly and often chews on its attacker. It is a rear-fanged snake, possessing venom that will probably be quite devastating to its prey, but no effect has been reported on humans to date. On a recent trip to the Andaman Islands, we caught a handful of specimens and were hard-pressed to get them to bite into the venom collection receptacle. When they did bite, we were able to see their fangs, placed far back in the mouth, with slivers of clear venom flowing down them. We’ve collected this venom for research, and will have some idea about the composition of the venom later in 2020. As of now, nothing is known about the venom of this species.

A dog-faced water snake before it sheds its skin, spotted in the mangroves of Krishna district in Andhra Pradesh. The milkiness seen in the eyes is caused by a fluid, secreted to separate the old skin from the new. Photo: Srichakra Pranav - CC BY-SA 4.0

Our expedition to the islands also showcased a very disheartening aspect connected with the snake’s habitat. Mangrove ecosystems are under siege by rabid development, unregulated tourism, and pollution. Numerous locations where I had in previous years seen dog-faced water snakes, were now garbage dumps, or had been cleared for construction. This is a trend that is happening all over our country. Some well-known locations have been fought for, but this habitat type is in grave danger all along our coasts.

The dog-faced water snake thrives in an ecosystem that feeds us. Mangroves protect the coast from tidal extremities, provide a breeding ground for numerous fish species (including commercially valuable ones), are rich in nutrients, and are major carbon sequestering sinks. The absence or scarcity of a species such as the dog-faced water snake is a red flag, indicating that things are very bad. We need to pay heed to these warnings and bring back this seemingly innocuous, yet, key species.