Grasslands are the Eastern Swamp Deer’s Only Domain

Selective about feeding and breeding exclusively in swamp-ridden, riverside grasslands, this subspecies of barasingha needs this habitat for survival

When you enter the ample 430-km expanse of Kaziranga National Park, it is assumed that you are here for the famed greater one-horned rhinoceros. The forest guides lead you straight to it, rattling off facts and figures of how the rhinoceros is the park’s most successful conservation story and the pride of Assam. As I scan the landscape for the pachyderm, I notice a quiet, graceful herd of the eastern swamp deer, standing in the distance, grazing peacefully. Against the backdrop of tall verdant grasslands their sleek, reddish-brown coat shimmers like dark gold in the morning sun. I watch intently as they flap their ears to keep flies at bay, soft tufts of white hair sticking out. At the heart of the herd, is a large, mature male with magnificent antlers branching off at right-angles. “They are also known as the barasingha as it was believed that their antlers had 12 points,” says Tokib Ali, a jeep driver, who has grown up in one of the park’s fringe villages and shares an intimate relationship with the forest. Barasingha literally means twelve horns, but the name is a misnomer. If you were to count, you’d notice that the numbers vary — from 10 to as many as 17. In colonial times, the barasingha was extensively poached for these very antlers. Today, it receives very little attention. With the spotlight on Kaziranga’s charismatic, mega-mammals, especially the tiger and rhino, equally vulnerable and important species remain on the sidelines. 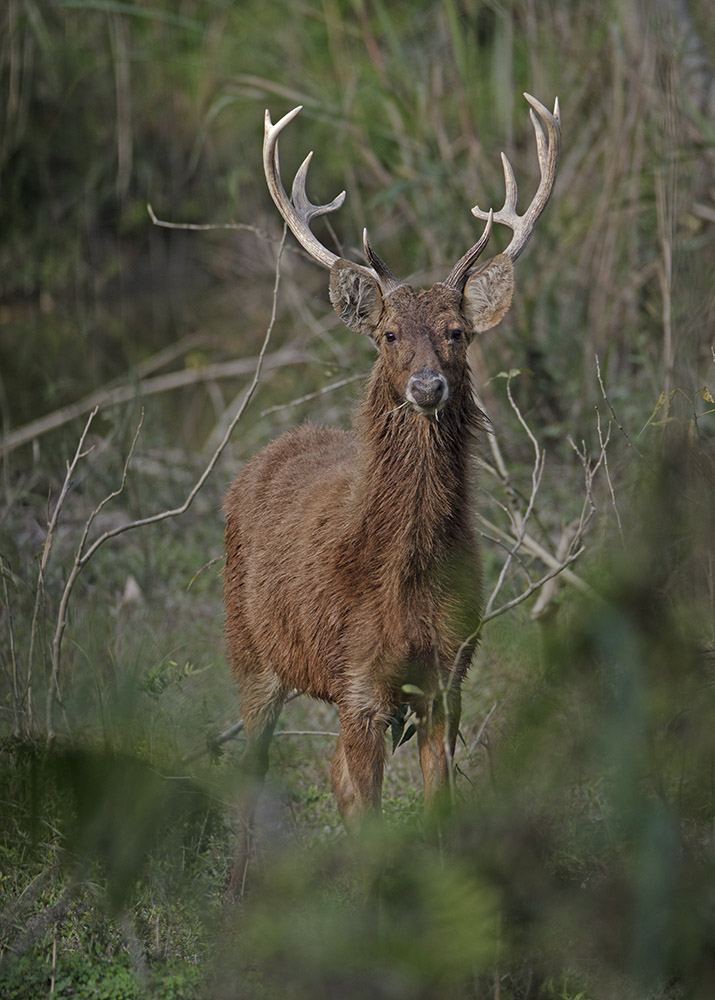 Thanks to the characteristic branches on its antlers, and a handsome, reddish-brown coat, the eastern swamp deer stands out against Kaziranga National Park’s lush green landscape. Photo: Dhritiman Mukherjee

Kaziranga lies in the floodplains of the Brahmaputra, a gargantuan river that crosses the international borders of Tibet, cuts through the mighty Himalayas, enters India through Arunachal Pradesh, and then turns south to reach Bangladesh. On its way, it leaves a trail of lush, rich habitats. In Assam’s Kaziranga National Park, it engenders a unique riverine ecosystem that nurtures freshwater swamps, patches of moist deciduous forests, and sweeping alluvial grasslands. The swampy grasslands cover at least two-thirds of the park and are home to some of the most diverse species — including the eastern swamp deer, a stubborn and sensitive mammal that depends wholly on this habitat and does not easily adapt to new or changing environments. 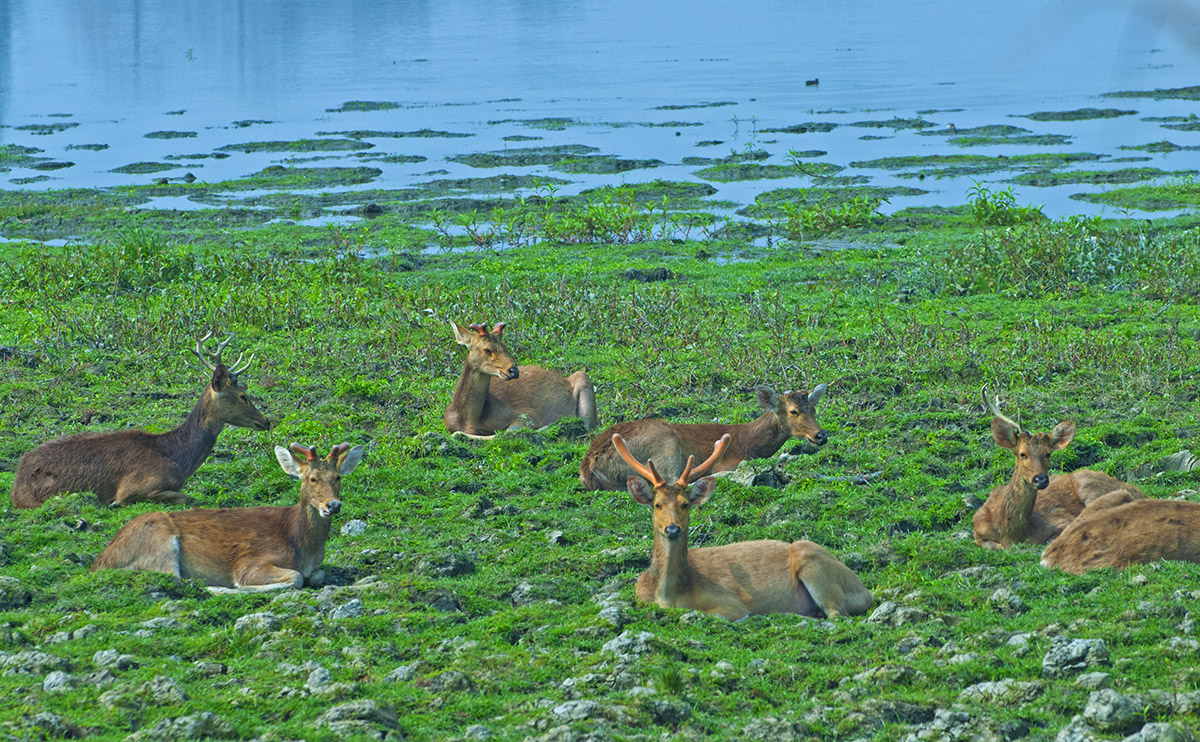 As the name suggests, the eastern swamp deer spends long hours in and around the swamps of the national park, feeding on aquatic plants or resting in herds. Photo: Dhritiman Mukherjee

The eastern swamp deer’s only natural habitat, the grasslands, are vibrant ecosystems, however, less than one per cent are legally protected areas. Often, they are misunderstood or deliberately characterised as ‘wastelands’ making them available for easy exploitation. “Grasslands across the country are under great threat and the animals who depend exclusively on this habitat, like the eastern swamp deer, are the first to get affected,” says Dr MK Ranjitsinh, principal author of the Wildlife Protection Act of 1972 and one of India’s leading voices on conservation in India. The subspecies’ scientific title Rucervus duvaucelii ranjitsinhii, is named after him for his contribution towards the identification of it as a separate sub-species of swamp deer. “The pygmy hog, the Bengal florican, the great Indian bustard are all species who exclusively live in grasslands and are among the most threatened currently,” he adds. The eastern swamp deer was once found across the floodplains and alluvial grasslands of West Bengal, Upper Assam, and Arunachal Pradesh. Most of these stretches have been cleared off to make way for paddy fields. In Assam, where it is also called the dol horina — dol means ‘swamp’ — an estimated population of 907 is only seen in Kaziranga National Park. 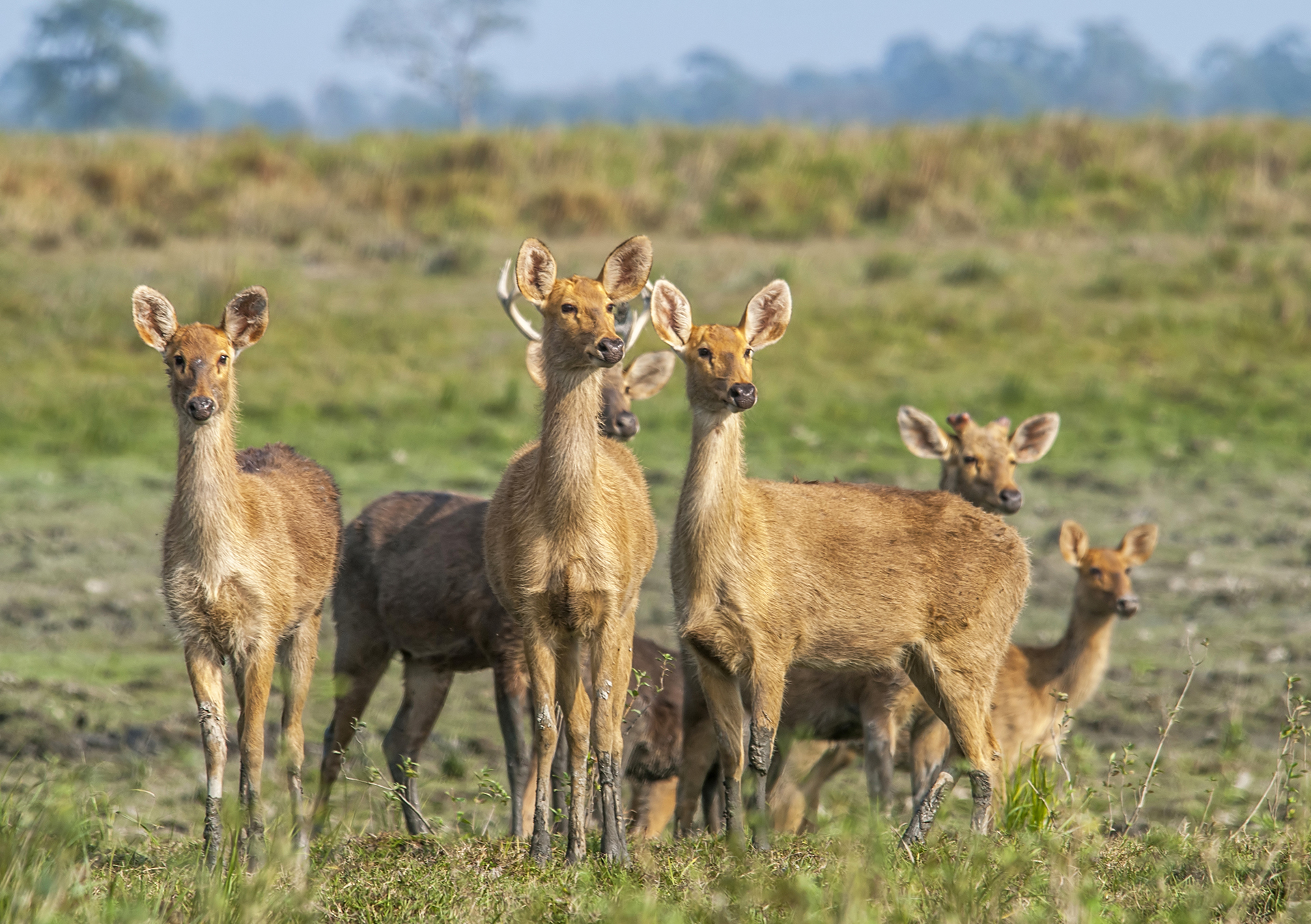 During the fawning season, eastern swamp deer congregate is separate herds — mothers and young ones stay together, while male adults move around in small groups of their own. Photo: Udayan Borthakur 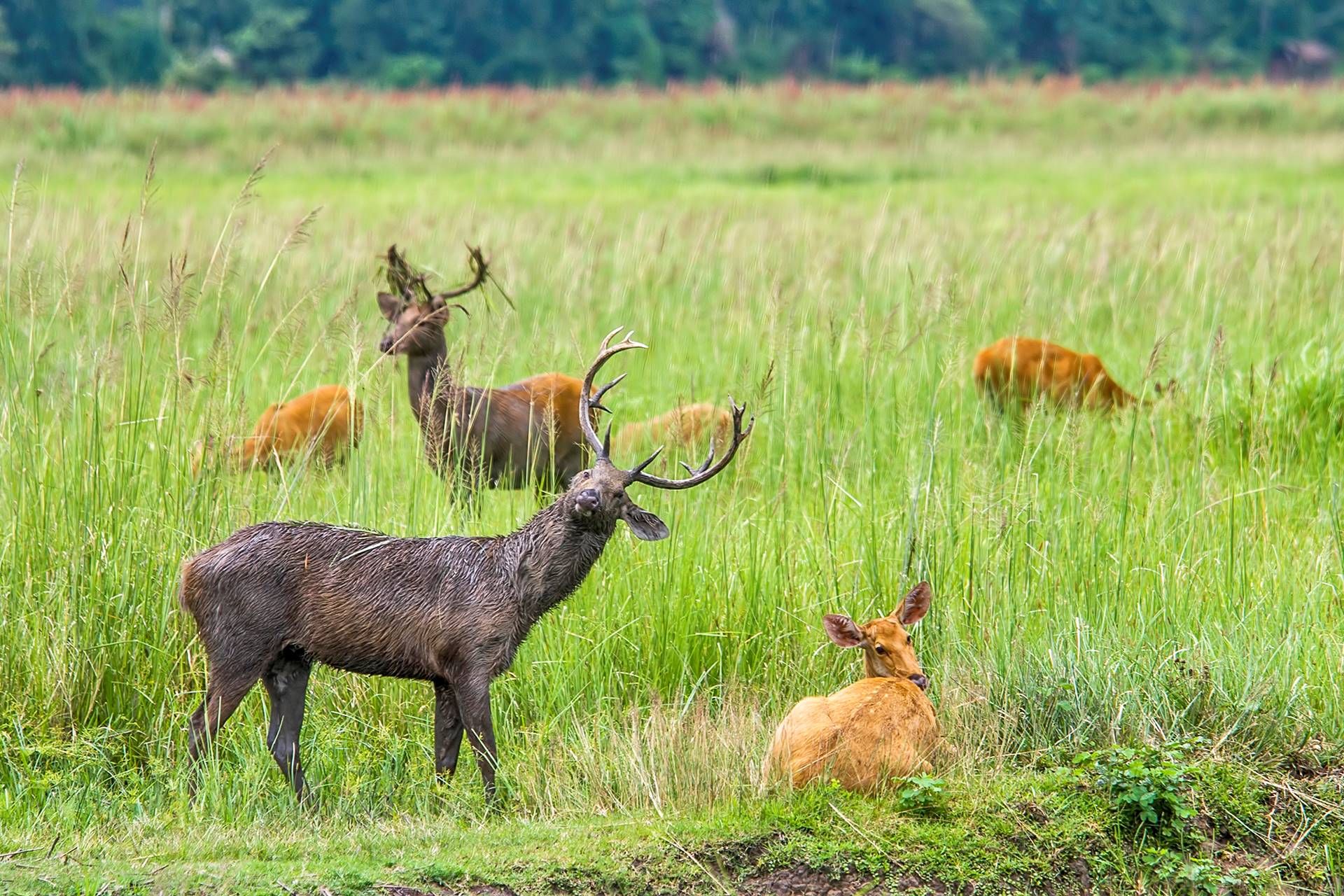 The eastern swamp deer is one of the three subspecies of swamp deer, commonly known as the barasingha. The other two are found in the foothills of Himalayas and the forests of Central India. Some studies suggest that the barasingha’s evolutionary history is closely tied to the floodplains at the foothills of the Himalayas. From here the species has travelled and evolved across central, eastern, and northern India, settling exclusively around riverside, swampy grasslands. It is known to be a very picky eater, feeding almost only on grasses found around marshes, and water weeds.

The monsoons in Kaziranga mark the eastern swamp deer’s rutting or breeding season. The breathtakingly green grasses grow as tall as 20 feet and the deer mate within its dense cover. In August, when the rutting season is at its peak, the park resounds with their rutting calls. After a period of seven to eight months, a new fawn is born and finds shelter in the same grasses. Unlike other species, the barasingha is a monoestrous deer — which means it gives birth to only one young per year. But Kaziranga National Park is a dangerous place for newborns. The park has the highest density of tigers in the country. With over 100 tigers stalking the open grasslands for prey, the vulnerable fawns are at great risk. Ranjitsinh speaks of a time when a herd, due to diminishing habitat, was pushed into a tigress’s territory. “She had recently had cubs and needed to feed them. In a frenzy she killed over 16 in a month. The swamp deer had no escape,” he says. But no predator drives its prey to extinction, he emphasises. “Only humans are capable of that.”

Forest officials at Kaziranga undertake a carefully calculated process of controlled burning of the grasslands every year. While the process is necessary to make room for new grass, it destroys the very habitat that the eastern swamp deer survives in. Photo: Nejib Ahmed

Every March, the park goes through a phase by phase process of ‘controlled burning’. While the burning is necessary for creating space for fresh grass and increasing visibility of large mammals, smaller insects, reptiles and mammals burn and perish. The eastern swamp deer that breeds and raises young ones in these grasses is one of its main victims — new born fawns are exposed to predators and turn into easy prey. Several cases of deer fleeing the park during the burning and losing their way in farms and villages have been reported. “We have developed what I call the ‘Mega Mammal Myopia’ — we cannot see beyond the tiger and rhino,” says Ranjitsinh. “The eastern swamp deer is a grasslands specific species that gives birth only once a year in these grasses. The safety of this single fawn is key to survival of the species. Burning grasses puts it at great risk.”

Hussain and I drive through long dark, brown stretches of burnt grass. The landscape looks distinctly pale and depressing compared to the rich, green swamps. An alert, mature male barasingha stretches his neck, its ears cocked, watching our jeep intently, expecting danger, before it darts away. But not all hope is lost. In 2014, a group of 19 eastern swamp deer was relocated to Manas National Park, a former habitat. The population continues to grow. “Nature is resilient,” says Ranjitsinh. “Secure the grasslands, and the barasingha will thrive again.”