A provoked, charging elephant may please popping cameras, but distresses the otherwise peaceful animal. They deserve the land, space and privacy they need

The year was 2007. The place was Corbett tiger reserve. The air was full of the promise of tigers. Or perhaps, it was our imposition, as our keen eyes scoured each blade of grass, behind the bada sal — a huge sal (Shorea robusta tree) that stood like a pillar, Corbett’s gentle hills, and the gleaming pebbles in the merry Ramganga river. I was in an open Gypsy with a forest official, and his wizened driver confidently drove us through a road that cut into the hills like a Himalayan river.

As we drove, the green hills were a shining blur. But I distinctly saw something that wasn’t a leaf. It was a large, grey texture; tactile, shifting, restless. It seemed almost like a grey saree had been tacked between the trees; as if it was flitting in the breeze with some intent to fly off. It was just a feeling that something was askew or waiting to flee, rush, or expend its energy. These “feelings” in the jungle are hard to describe. Civilisation and schooling erase these gut feelings and replace them with signals of rationality. But in the forest, it is your gut feeling that can be the difference between life and death. 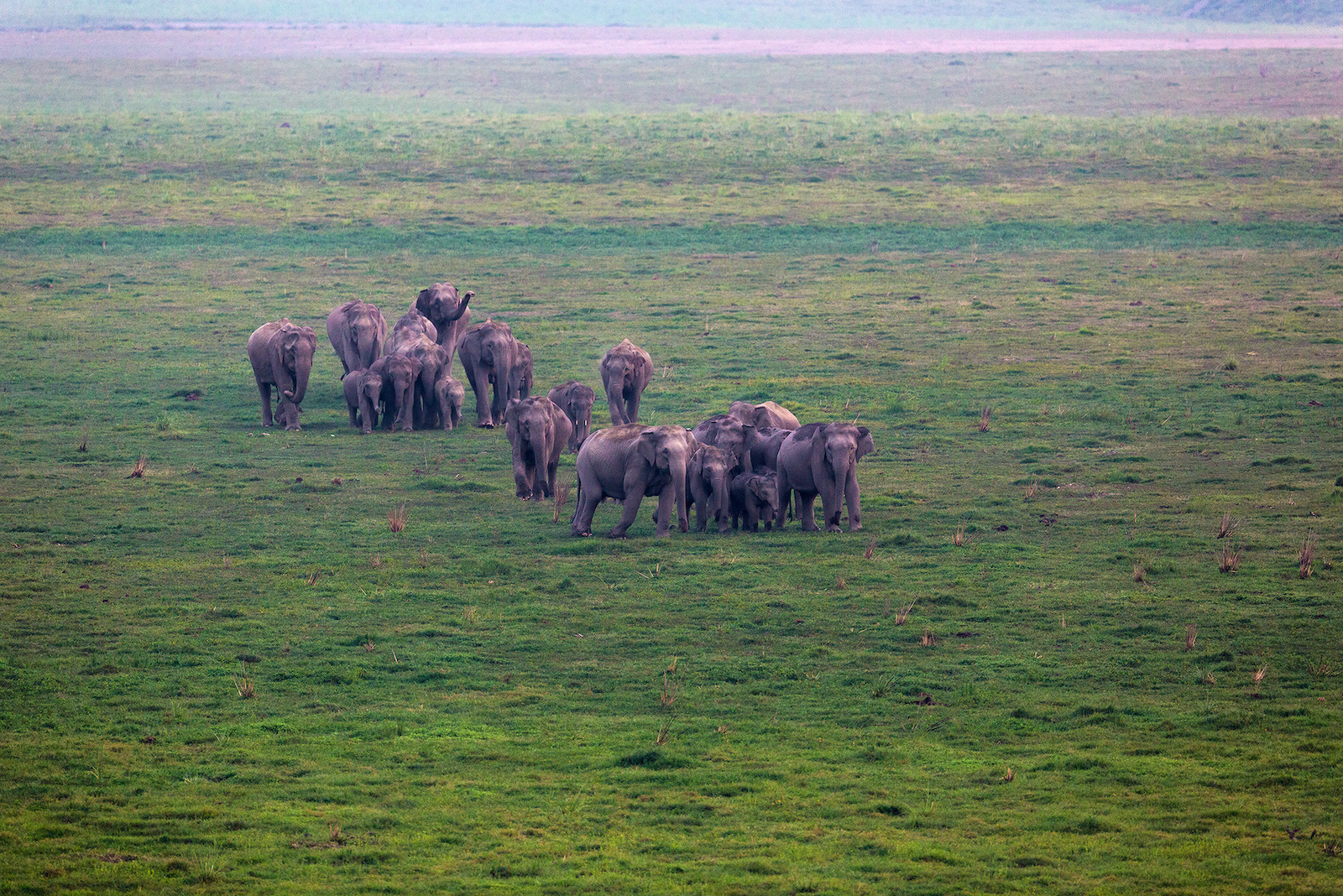 Uttarkhand’s Jim Corbett National Park is known as the land of the roar, trumpet and song for a reason! The park’s rolling grasslands are a favoured habitat for large herds of elephants. Photo: Arindam Bhattacharya Corbett offers a remarkable peek into the intimate family lives of these gentle giants. Tourists must remember that respecting their privacy and maintaining a distance is of utmost importance. Cover Photo: Arindam Bhattacharya

We passed that area and I said nothing about the snatch of grey. We took a round of the forest, and in some time were back in the same area. The driver had stopped the car. We were looking at a paradise flycatcher; the area was still and humming. Birds chirped, insects droned, the forest felt like a drowsy animal. And suddenly there it was again: that gut feeling of something being amiss. The next second, a tusker charged at us. I was in the back seat of the Gypsy; the elephant came straight for me. He was running. He was flapping his ears. He was trumpeting. His dull ivory tusks shone as he moved. It felt like the whole world was tumbling over my weak shoulders; like the very world was ending and its last screams were in my ears.

We had been frozen in panic, but now the driver had started the car. In a minute, we had picked up some pace. While some elephants stop chasing if you move, this tusker would not stop. He followed us, trumpeting, beating his ears, stomping his huge feet. And I had turned to face him; wanting to die, wanting to stay alive; but more than anything wishing for this to end. The gypsy was open. I felt his rage on me like a hive of bees, his anger an inferno that split the air and left an impact on my skin. He followed us for a kilometre. At a steep bend in the road, he finally stopped giving chase. A kilometre later, the driver stopped the car. His shoulders were shaking furiously.

“It took me some time to turn the keys,” he said, turning to me. “I am sorry. My hands were shaking.”

“But you know, I never took the keys out of the ignition. You don’t do that in the forest,” he said. He was grinning now.

An elephant’s eyesight may not be the best, but its hearing and olfactory senses more than make up for its poor sense of vision. Photo: Sourabh Bharti/Shutterstock

A few months later, I was back in Corbett. Like a wound I didn’t want to touch, I avoided the place I saw the “rogue tusker”; asking to be taken to other parts of the sanctuary instead. We were still looking for tigers, like slightly stupid algorithms that refuse to learn new things.

An elephant had appeared on the path ahead of us. And it wasn’t just one, though at first we could just see one. A large female was blocking our view. She looked at us, then at the herd as it began crossing the road. Then, she waited. The youngest calf, looking just a few months old, was gingerly stepping across the road. When the calf had crossed, the matriarch turned to look at us. I thought of the tusker who had charged the last time. A lance of fear went through me. The next second, the driver had revved the engine. Oh, he will drive away, I thought, relieved. I was wrong. He was bucking towards the elephant like a cheetah. The matriarch hesitated. The next moment she charged. She was trumpeting angrily — the fury of a mother and protector. She threw her trunk downwards, expending a cloud of dust. A few more paces forward. And then she left.

What did you just do? I asked the driver, somewhere between nervousness and outrage. I felt I was walking on eggshells, as if the air would split and all the elephants of the world would squeeze out.

Elephants are led by the oldest and largest female in the herd known as the matriarch. Females in the herd always watch over calves. Photo: Arindam Bhattacharya

“Why did you drive towards the elephant?”

The driver turned, reminding me of the forest department driver in the earlier vehicle.
Only both men looked at the elephant completely differently.

“I went towards her so she would mock-charge us. And you could get a photo,” the man said, perfectly calmly.

My blood was still racing. I was finding it hard to process my feelings. The forest was still now. The elephants had melted into the vegetation. The only memories of the mock-charge were in footprints on the dust, and the throb in my temple.

“Don’t.. don’t do it again, ever” I said through gritted teeth.

“Why? Were you scared? This wasn’t a charge. It was just a mock-charge,” the man said, speaking like he was having to explain the world to a petulant child.

That night in my room, it all made sense. Drivers making elephants do mock-charges. Cameras popping. The forest being lopped. I thought of an elephant who had begun to associate gypsy vehicles with an angry mother, and cars with trauma.

I went back to meet the ranger.

Do you remember that elephant, I asked. The one who charged at us.

The park administration did nothing special for the elephant, nothing but granting him space. As I learnt more about elephant biology, I realised biology wasn’t the only science I needed to know. I also needed to know elephant sociology, the way elephants took care of each other and how the older members would respond if the young were threatened or needed to cross roads and streams. I also needed to know political ecology — the pressures and pulls that governed human interactions with them.

In the last five years, it has become a tourism industry standard to not bait animals or go too close for photographs. Many wildlife portals and magazines will not publish photos where the elephant seems to be charging or provoked.

As for me, I started advocating for giving animals space and privacy.

A final thought developed in my conversations with the ranger. At one level, we think of elephants as a manifestation of Ganesh — the elephant god. Ganesh is loved and cherished but ironically elephants with broken tusks are deemed “problem animals”. We forget that many of these problems are created by us, our greedy digestion of the landscape and our disregard for the fact that elephants need land, space and privacy. In November 2019, a photographer was trampled to death for going too close to an elephant in West Bengal. Another elephant was hit by a train in West Bengal’s Dooars, dragging itself painfully into the forest and dying later, in a long line of such deaths. And a “rogue” elephant that had been named after Osama Bin Laden in Assam died of heart failure after being taken captive.

So many Ganeshes walk amongst us, made and unmade by us. 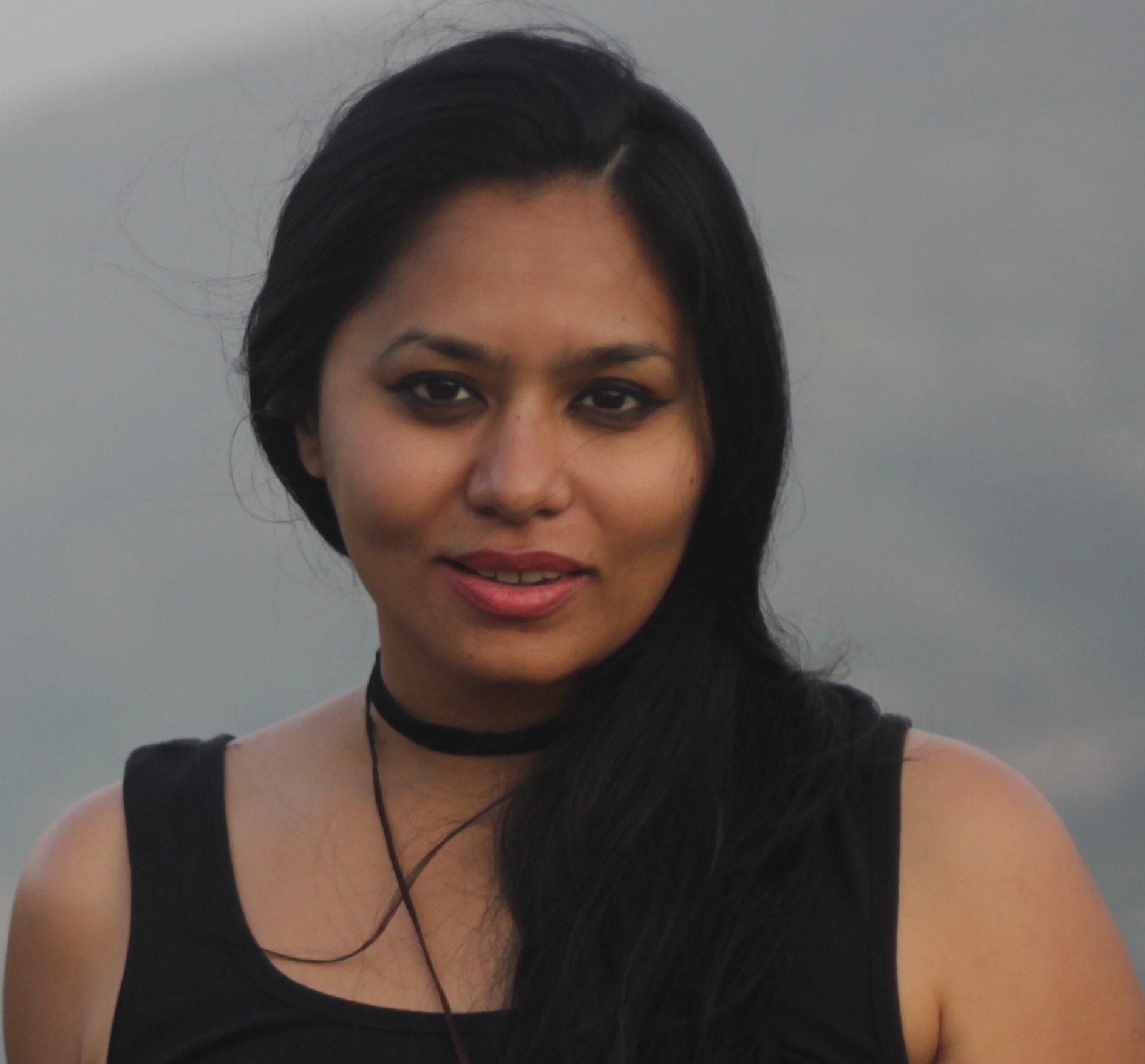 is a conservation biologist working with the Bombay Natural History Society. She loves art and colour, and is lucky to find them both in nature. She tweets at @nehaa_sinha.