These tall waterbirds alternate long periods of standing around doing nothing with brisk fishing expeditions. They are elegant, snow-white marsh birds with long, soup-ladle bills, but when they get annoyed, they’re a riot

Like many other waterbirds (flamingoes, for instance), Eurasian spoonbills (Platalia leucorodia) carry off the sublime and the ridiculous with elan. These tall (60 cm), elegant snow-white marsh birds are equipped with long, soup-ladle like black bills with a yellow tip. They wear an orange-lemon patch on the base of their fore-neck and a yellow scarf-like patch on their throats. They stride around in the shallows on long, black legs with webbed feet. In the breeding season (usually during the rains, July to October in North India, November to January in the south), they sport a “nuchal” crest on the top of their heads, which is raised indignantly and ludicrously when emotions run high. I like to imagine baby spoonbills being spoon-fed by parents being hard-pressed to stifle their giggles as their parents’ crests stand up vertically Mohawk-style when a tidbit is refused (“What? We’re having tadpoles again?”), and then flop back down like a mop all over their foreheads when the tidbit is accepted. And so will you find it difficult to hold down a snort of laughter when you watch a pair getting hair-raisingly upset when an egret or heron lands clumsily near their nest — it’s elegance, with a flavour of the muppets! 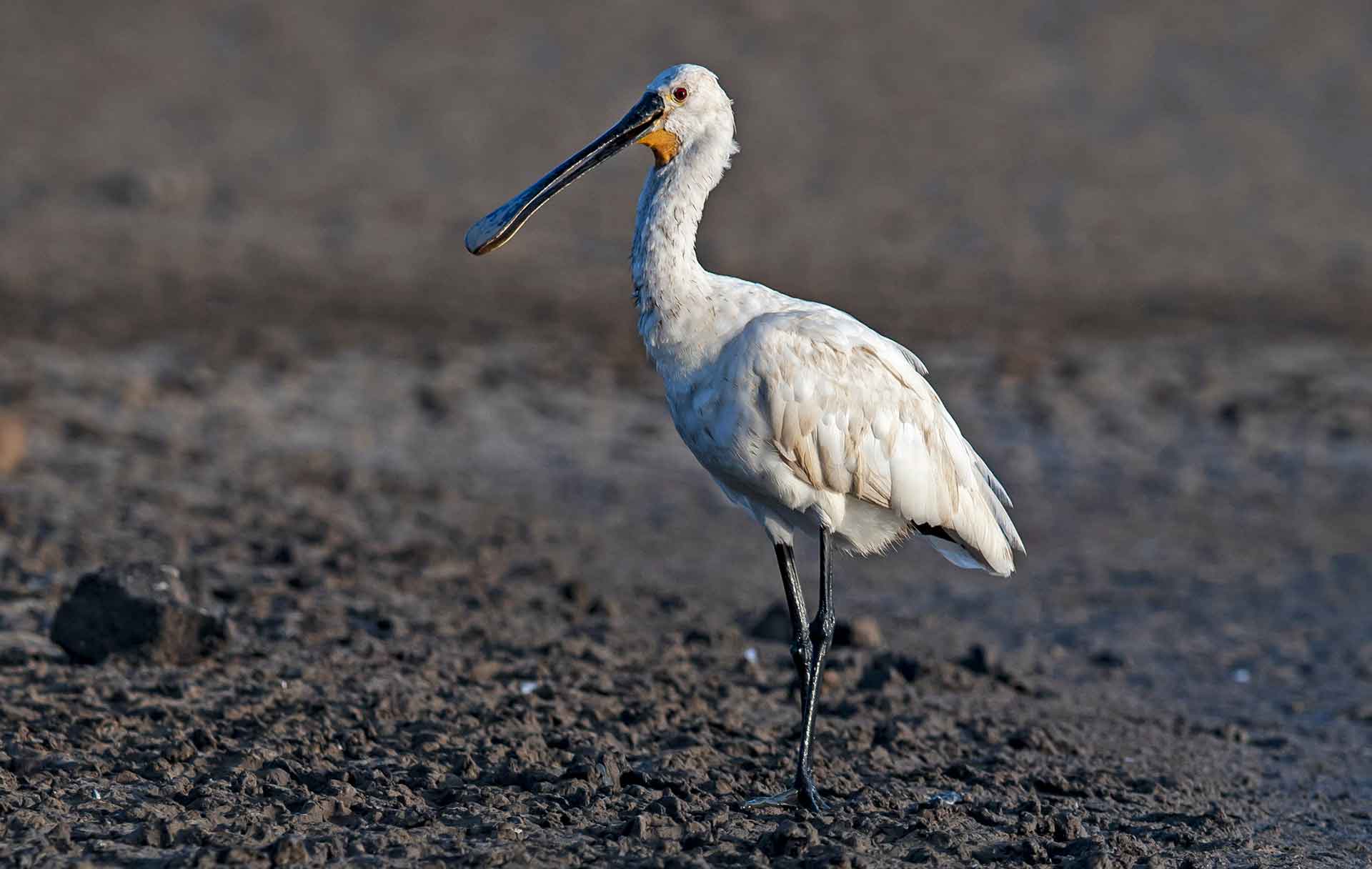 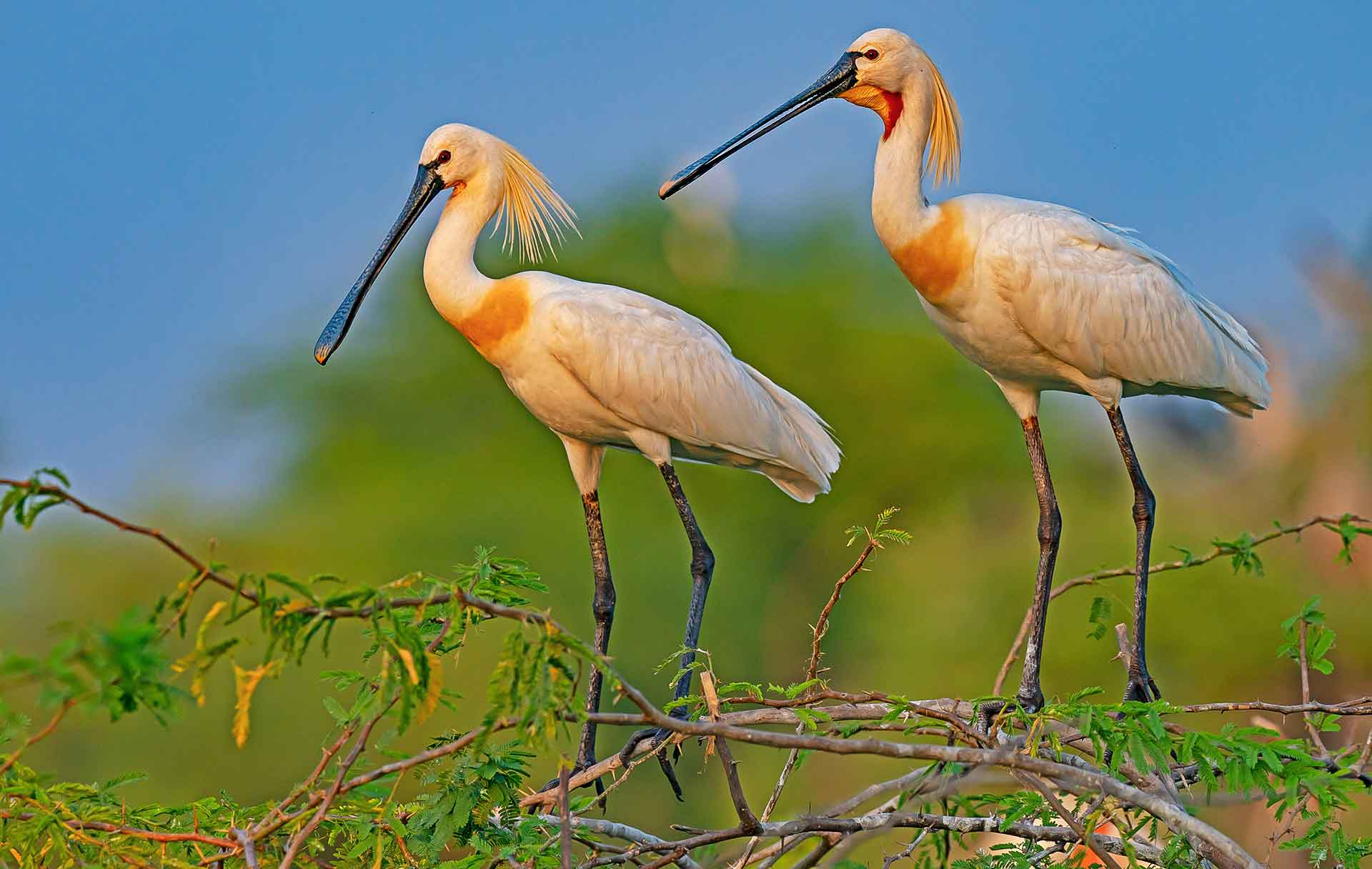 Adult birds are almost entirely white except for their black legs and bill, and a yellow patch on the breast. Non-breeding adults (left) lack the breast patch and crest sported by breeding adults (right). Photos: Dhritiman Mukherjee
Cover Photo: Eurasian spoonbills sweep their spatula-shaped bill from side-to-side to feed on crustaceans and small fish in the shallow wetlands they inhabit. Walking close to each other in small groups enables these waders to forage more effectively. Cover Photo: Arindam Bhattacharya

That’s not all. You’re quite likely to come across a small party of 4-6 (but sometimes as many as 50) spoonbills standing idly tummy-deep in the shallows, ostensibly day-dreaming. Then, suddenly, as if in answer to some common inner voice (or electric shock), they all wake up from their trance and start striding forwards, rapidly sweeping their spatula-like bills from side to side in the water as if searching for underwater mines, working the area methodically. The lower mandible of their bills sifts through the clayey or gravelly bed of the waterbody, trapping small fish, tadpoles, crustaceans, molluscs, and the like, which is what they relish (including vegetable matter and algae, which are probably just by-catch). Then, after a brisk fishing expedition, they’ll go back into their trance and just stand around, doing nothing.

As for their elegance, that’s on display when they fly in wavy, silvery ribbon-like echelons slanting across the sky or in the time-honored “V” formation, legs and necks stretched out, wings beating with methodical deliberation and perfect timing. They are quiet, introspective birds — only perhaps rattling their beaks or softly grunting when at the nest, excited, or emotional over something. 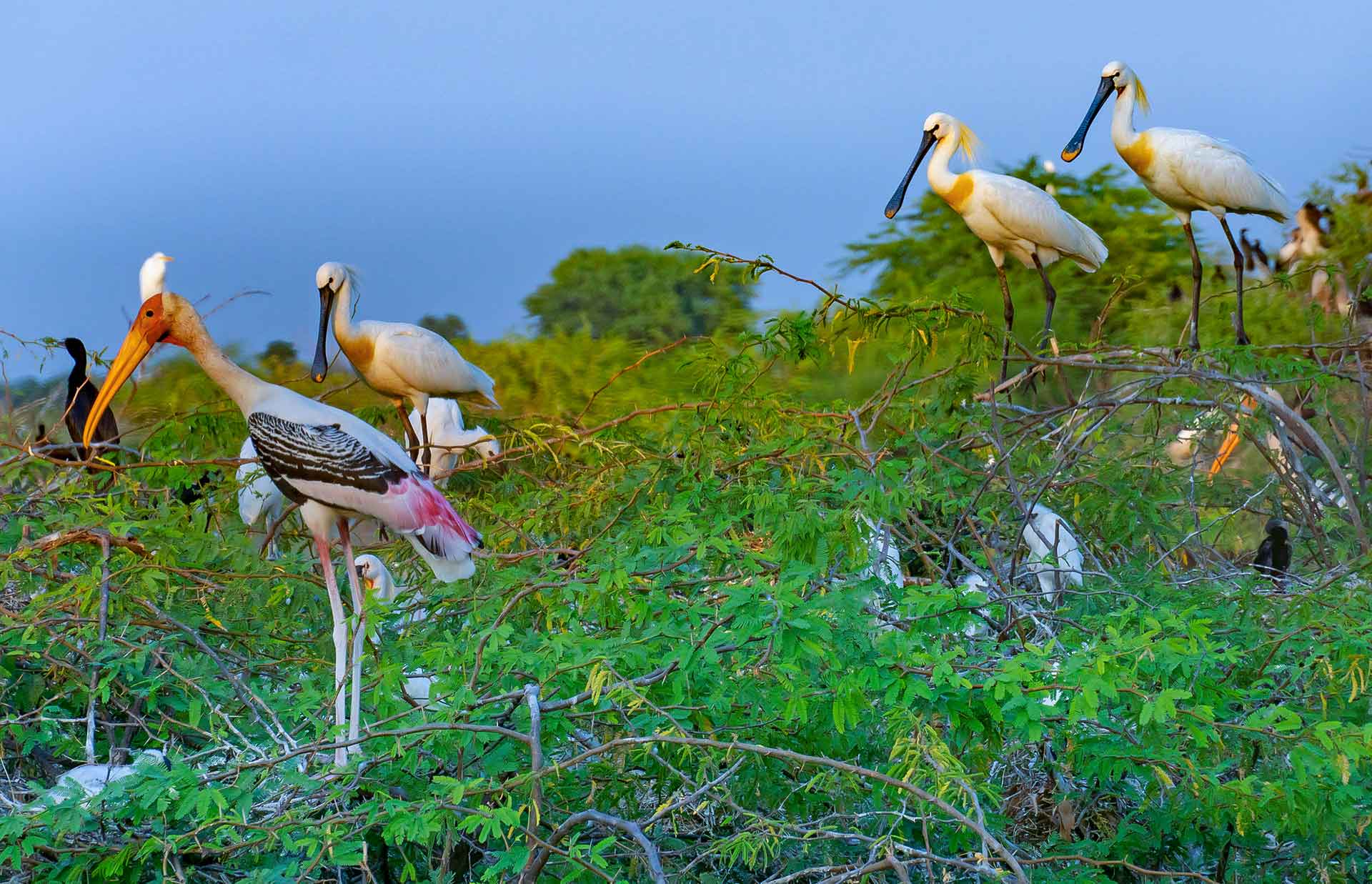 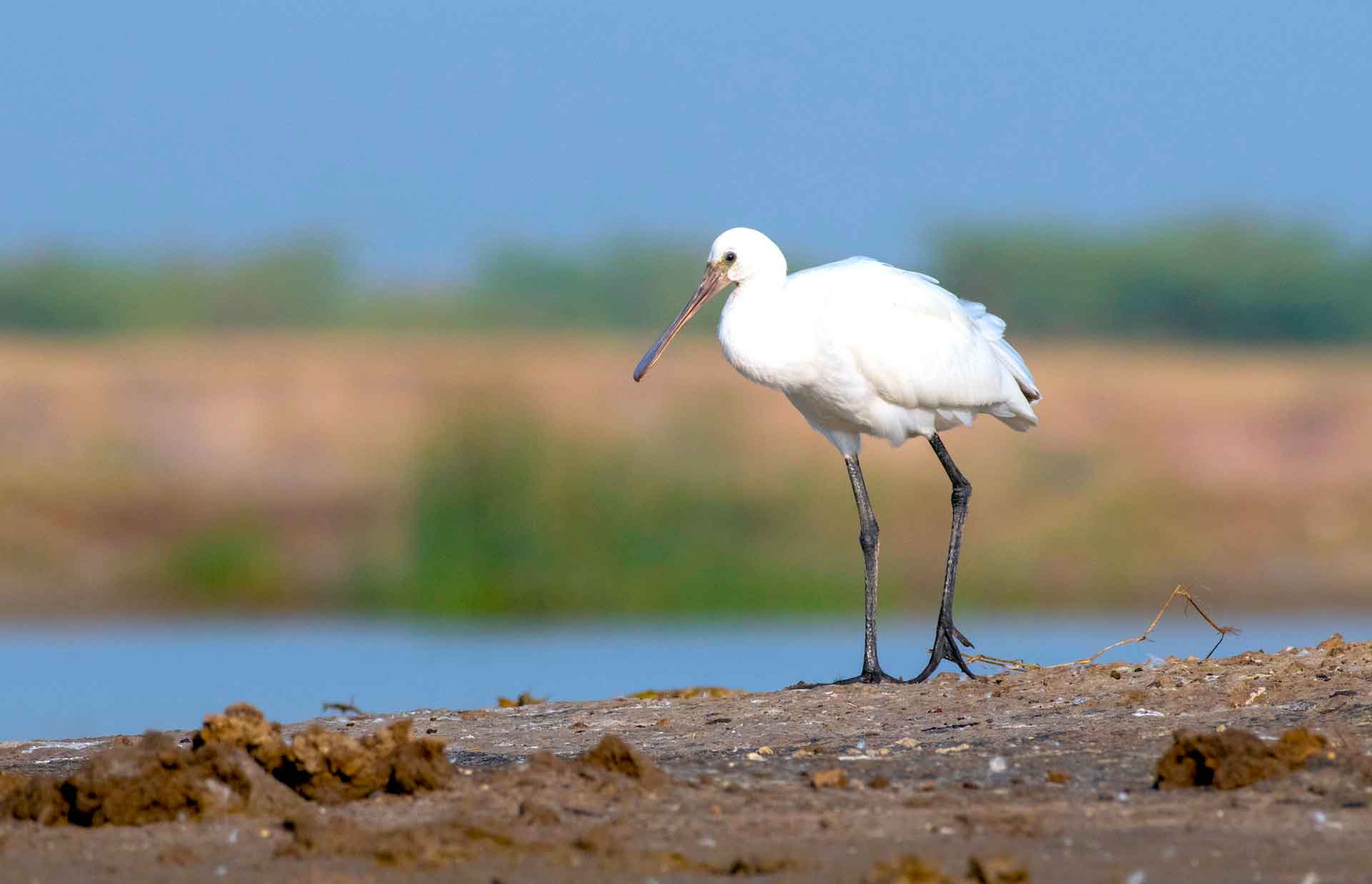 (Left) These solitary birds come together in the breeding season to form colonies. Their nests are usually built on trees and bushes near or over water. (Right) Young spoonbills fledge around 45-50 days after hatching and are sexually mature at 3-4 years. Photos: Dhritiman Mukherjee (left), Neel Sureja (right)

Eurasian spoonbills can be resident, nomadic, or winter migrants to India. They are also found in Europe, China, Central Asia, and east up to Japan. In India, they may be absent from the country’s Northeast and Central and Eastern parts. Their preferred places to live include all kinds of shallow waterbodies, whether fresh, saline or brackish: jheels, lakes, rivers, tanks, talaos, estuaries and suchlike, especially if furnished with copses of trees, like acacia where they can set up home. The nest may just be a flimsy pad of vegetation or a large platform of twigs — sometimes built low over the water or more usually, up in the trees — lined perhaps with leaves and grass. Both parents participate in nest-building and the incubation and babycare duties that follow. They are colonial nesters and may live cheek-by-jowl with as many as 100 others of their own kind, preferably. But they do tolerate egrets, herons, and cormorants as neighbours too, even if they cause them to raise their crests in annoyance every so often.

Once the home is set up, the spoonbill pair might, as the naturalist EP Gee described, just stand in the nest and stare vacantly into space, as if waiting for something to happen. Something eventually does: the lady lays an egg! It is followed by more, totally 3-4 chalky white ones, sometimes slightly marked with blotchy dark and light brown markings. It is thought that incubation lasts around 21 days. Downy white chicks hatch, not exactly with a golden spoon in their mouths, but equipped with teaspoon bills that eventually turn into soup-ladle-like bespoke spatula-shaped in adulthood. The parents care for their young and will unfurl their white wings over them to shade them from the sun.

Pollution, degradation, and drainage of their wetland habitats are some of the threats faced by these birds. Photos: Neel Sureja (top), Dhritiman Mukherjee (above)

Eurasian spoonbills are doing well enough to be considered of “Least Concern” on the IUCN Red List, though the ever-present dangers of habitat destruction — especially of wetlands — does loom menacingly over the horizon.

Eurasian spoonbills have cousins living abroad in Africa, Australia, New Zealand, Indonesia, South America, the Caribbean, and the southeast United States. While most of these are white, with black bills (there is one with a yellow bill), the roseate spoonbill of the New World (South America, Caribbean, and US) are decked out in shades of lovely rose pink feathers.

While they’re certainly not the most extroverted of birds, spoonbills can teach you a thing or two about birding practices. Primarily, the value of patience. They may stand around like statues rather a lot, but when they suddenly switch to fishing mode, it’s all about determination, working as a team, and brisk action. When they fly, they’ll give you a lovely demo of elegance in motion, looking like a fine white silk scarf rippling in the wind. And when they’re peeved with the neighbours or their kids, they’ll raise those ludicrous Mohawk crests of theirs and get a chuckle out of you that can make your day!