The elaborate mating ritual involves calling, preening, synchronised swimming, and a graceful “waltz” on water as the final act 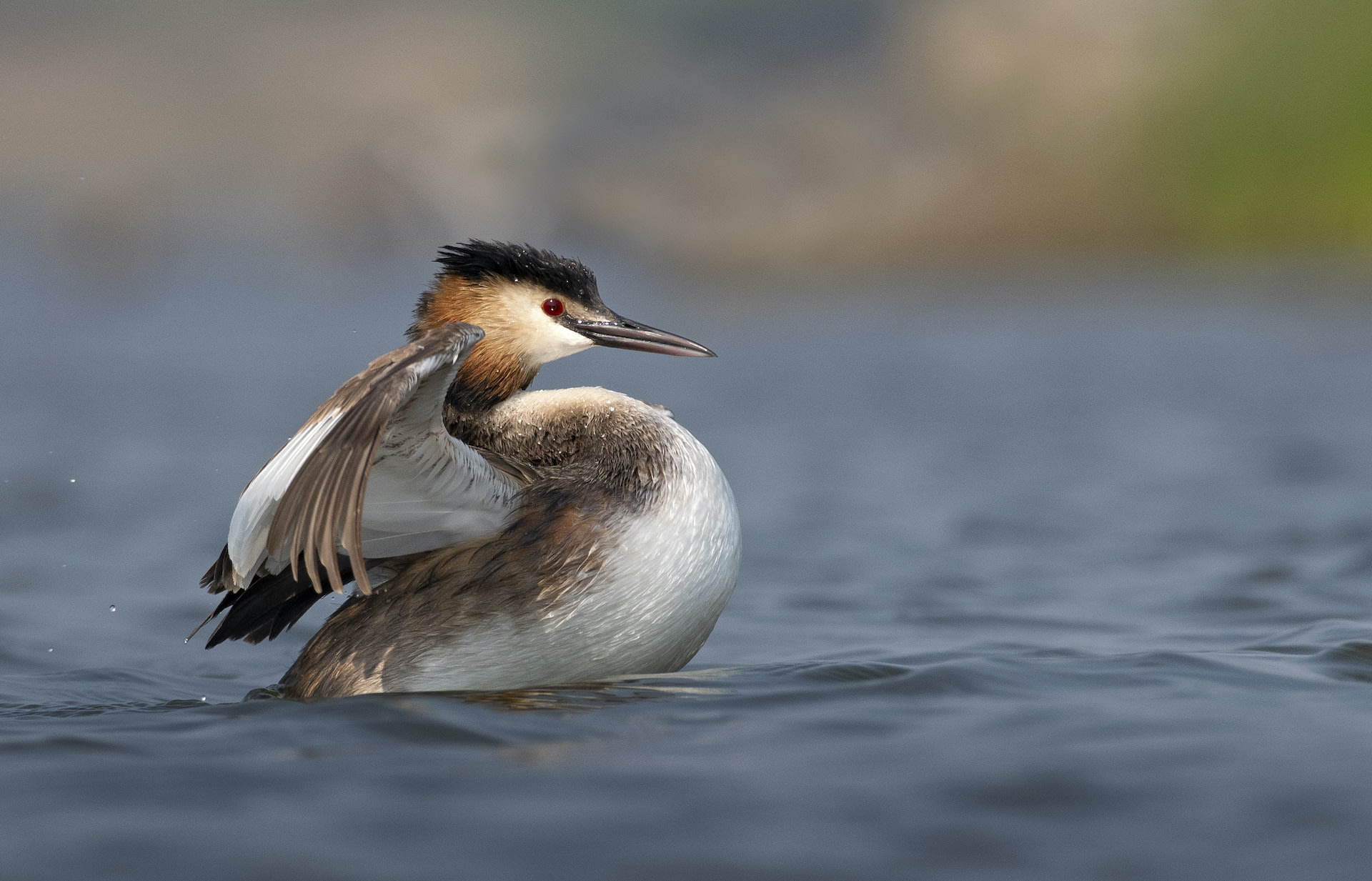 Great crested grebes engage in courtship rituals that are so elaborate and enchanting that they managed to change the course of ethology, the study of animal behaviour. With their plumes spread wide, grebes shake, shimmy and preen before launching into their final act — necks stretched up, chest puffed out, pairs rush together side by side paddling gracefully as if they are waltzing on water. In 1914, English biologist Julian Huxley published a two-week-long observation of this dance in the journal Proceeding of the Zoological Society of London that created a buzz. In the 18th and 19th centuries in Europe, specimen collection and description of new species from newly colonised territories was the central focus. Museums flourished and even competed with each other to get exotic specimens. However, after reading the paper, known for its simplicity and lucidity, people found that birds are more fascinating as living creatures than dead specimens in a museum tray. By the 1920s and 30s, ethology was a well-established subject.

The elaborate mating ritual of the great crested grebe involves 'mewing' and calling, synchronised swimming, preening and fanning out their neck feathers. These birds were once almost hunted to extinction in the UK for the plumes on their head. Photo: Wang LiQiang/Shutterstock
Cover photo: Measuring around 40 to 60 cm in length and weighing up to 500 to 1500 gm, the great crested grebe is the largest of the grebes. The wetlands of Jamnagar, Gujarat, where this individual was photographed, hosts a sizeable population of these birds. Cover photo: Neel Sureja

Since I read Huxley’s paper during my MSc days in Aligarh Muslim University in the 1970s, I have been fascinated by the great crested grebe. I even planned to go to the UK to see the courtship rituals but fortunately I did not have to go so far. During a project on Important Bird Areas in India, I had the opportunity to travel to various parts of India. I was told that a large number of great crested grebes are found in winter in the reservoirs in Sibsagar city, Assam. Once I happened to be in Sibsagar in early April, just before the grebes migrate back home to more temperate regions. For three hours I watched enthralled by the courtship ritual exactly the way Julian Huxley had originally described. Later, I was able to see this behaviour in high-altitude wetlands of Ladakh where they breed. Words cannot describe their fascinating ritualistic courtship dance. The best way to experience it, if not in person, is to watch one of the many videos available online.

Out of the 20 species of grebes in the world, five species are found in India, and two — little grebe (Tachybaptus ruficollis) and great crested grebe (Podiceps cristatus) — breed within our territorial limits. Regarding great crested grebe, the distribution information given in the magnum opus, The Handbook of the Birds of India and Pakistan (1983), by Dr Salim Ali and Dr S. Dillon Ripley has become slightly outdated. They wrote: “Winter visitor in small numbers to northern India….to Northeast Assam and Manipur…”. Regarding breeding, they concluded, “there is some indirect evidence that odd pairs may also breed irregularly in Gujarat and Saurashtra.” In the last 45-50 years, these “odd pairs” have become regular breeders. For example, I saw nests in the Menaria wetland near Udaipur. Local birdwatchers told me that they have been seeing nesting for many years. Another more interesting record of its breeding is in Srikakulam district, Andhra Pradesh by Sravan Kumar, a researcher at Jawahar Lal Technology University, Hyderabad, and his team. Three chicks were seen riding the back of a parent in December 2010, and subsequent surveys showed that two chicks grew wings and were able to fly. Its breeding in Saurashtra has been confirmed by many ornithologists. Similar spread is seen in Japan. Until about the 1970s, it was a winter visitor but since then there are many breeding records in Japan. 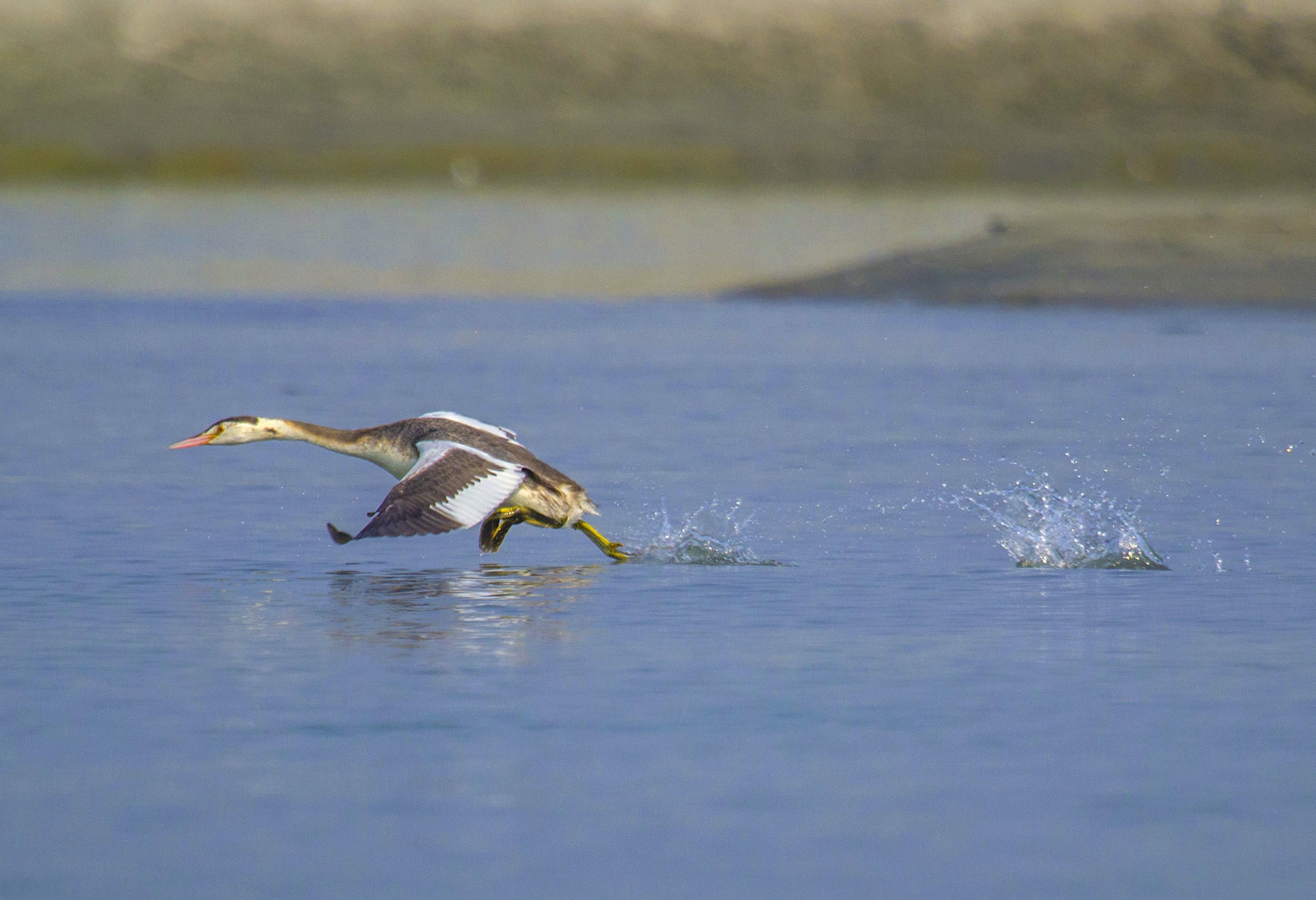 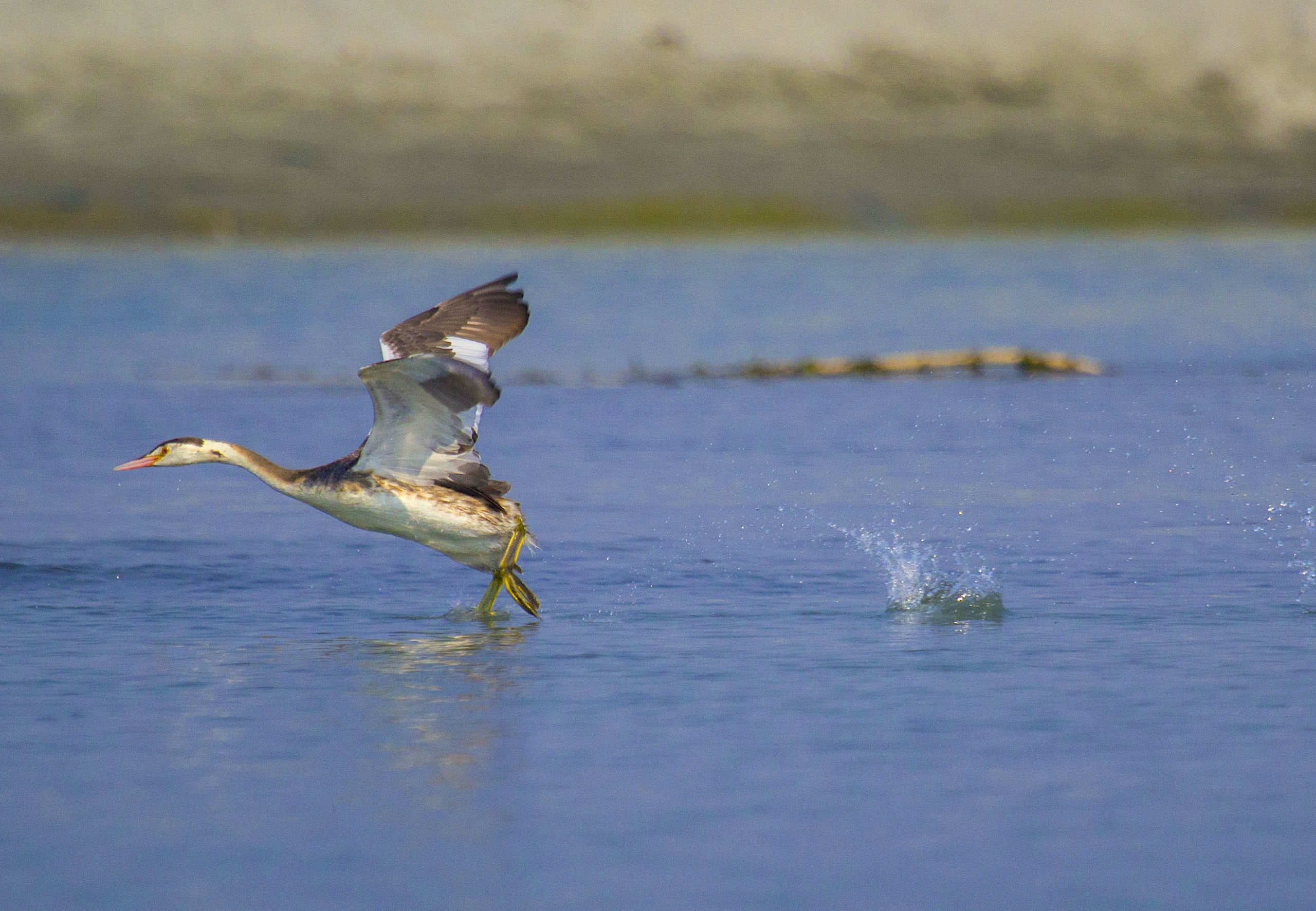 Small legs which are placed towards the rear of its body make them awkward on land, but act as excellent propellers when they dive under water in pursuit of prey. Photos: Imon Abedin

What could be the reason for its spread as a breeding bird? Climate change will come to everyone’s mind but why are other water birds not breeding in new areas? It could be just a natural spread of a species as new habitats are created? Or, they were always breeding in small numbers in India but are now being recorded as we have more birdwatchers and better equipment. As scientists, we have to keep our minds open to all possibilities.

The great crested grebe prefers moderately deep and clean waters where it can dive in search of aquatic insects, fish, tadpole and shrimps. It makes a floating nest of aquatic vegetation which is constantly replenished as the old vegetation rots. On the floating plate form, a cup-shaped depression is made where 3-5 eggs are laid. Parents make every attempt to keep the nest dry to prevent eggs from rotting due to the dampness. Both parents take part in incubation and chick rearing. Watching the chicks following the parents or piggy-backing on them is very heartwarming. As chicks are preyed on by carnivorous fish, the chicks climb on the parent’s back as soon as there is any lurking danger underwater. This also happens when there is danger from above in the form of a kite or a harrier. Grebes are very good parents but due to many predators, few chicks reach the adult stage. 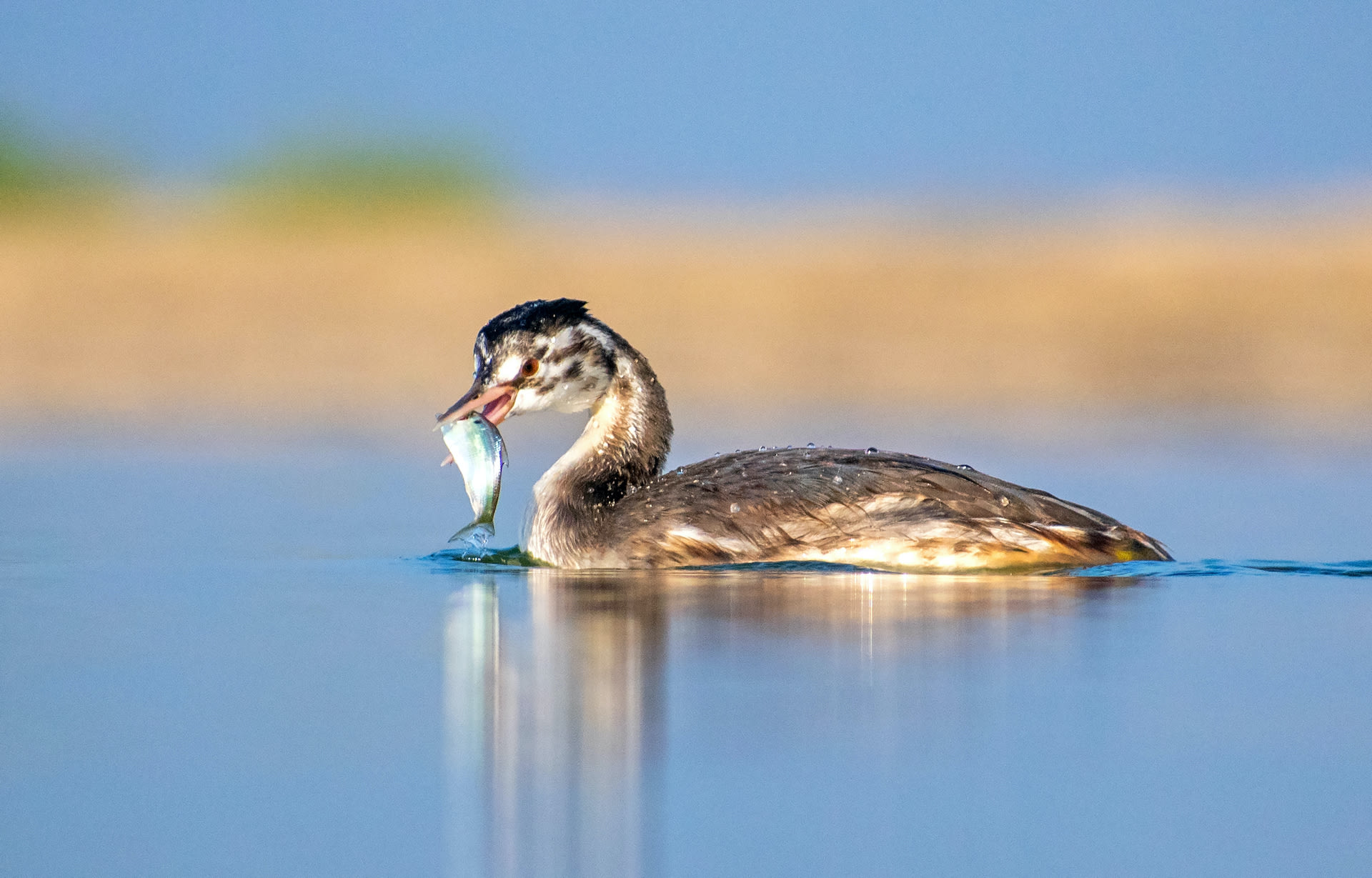 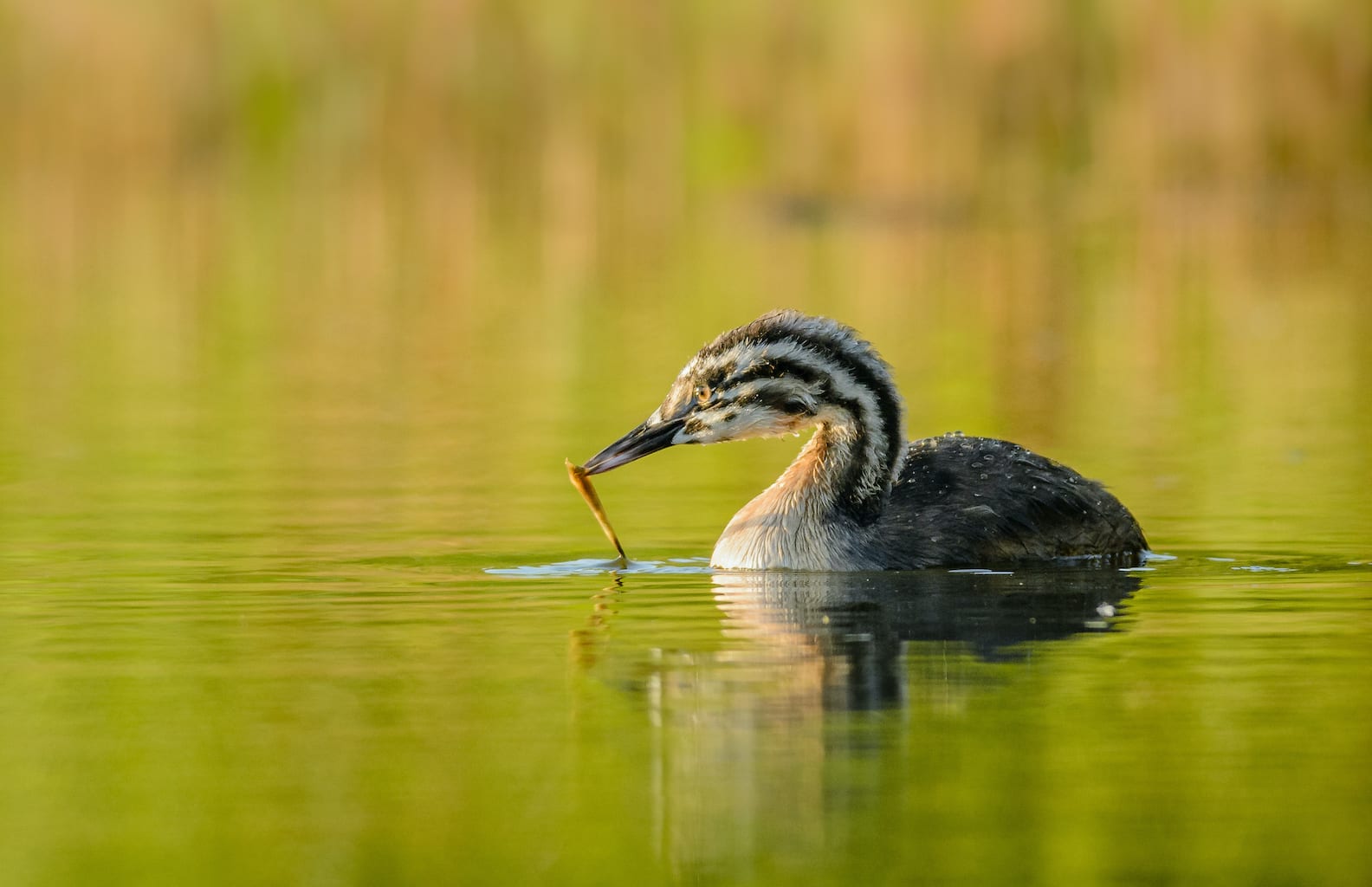 (Left) Fish, as seen in this image from Jamnagar, along with crustaceans, molluscs and insects form a major part of the grebe’s diet. (Right) Juvenile grebes have distinctive black and white stripes on their neck. Photos: Neel Sureja (left), Richard Guijt Photography/Shutterstock (right)

In old bird books, grebes and loons were generally in the beginning as they were considered ancient birds (and ‘modern’ birds such as sparrows, weavers, buntings, crows are in the end). New DNA research tells us that grebes are closely related to flamingos. But when you see them together as you can in some wetlands of Gujarat, they look so unrelated. Flamingos with long thin legs and grebe with small, backwardly directed legs and so many other dissimilarities. A characteristic feature of grebes is that their legs are far behind, so they are not able to walk on the ground, unlike most water birds. They fly from wetland to wetland during migration and dispersal. How do they land on the nest? From water they jump to the nest plate form, landing on their breast, and then comically waddle to the nest-cup. Every aspect of the grebe is fascinating.