Despite the fact that the greater one-horned rhino is testament to India’s most successful conservation, this fierce, fragile pachyderm and its habitat are under constant threat

While driving through Assam’s Kaziranga National Park, it is hard to ignore mounds of sticky brown mud along its rained-down roads, some surrounded by delicate pink flowers. On my first trip, I assume that it is dug-up soil — but a closer look reveals that it is lumpy and has a distinct stench. “That is a rhino’s toilet,” Tokib Ali tells me. He is a local jeep driver, who comes from a family of naturalists and guides. He lives in Busagaon, a fringe village on the periphery of the national park that largely depends on the park’s tourists for its livelihood. Ali has grown up on stories of the forest. “A greater one-horned rhinoceros defecates in the same spot for at least three months, and uses it to mark its territory and communicate with other rhinos,” he explains. Some piles or dung middens can be almost three metres wide. Odours from it provide crucial information to other rhinos, including age and sex of rhinos in the territory, and whether females are ready to mate. “The midden is their daily newspaper,” says Ali. Spider flowers are among the rhino’s favourite foods, and they spread its remains across the forest, creating a curiously fascinating landscape – piles of fetid dung, encircled by powdery pink blossoms. The dung middens not only spread a wide variety of seeds across the landscape, but also fertilise and nurture vegetation that other herbivores, including elephants, feast on. These dung middens are central to rhino habitat.

When the greater one-horned rhinoceros was first introduced into Assam’s Manas National Park as a part of a strategic relocation programme, a truckload of dung was also shipped there so the landscape would not seem alien to the relocated rhinos. This was done by Bibabh Talukdar, the chair of the International Union for Conservation of Nature’s (IUCN) Asian Rhino Specialist Group and CEO of the Guwahati-based NGO Aaranyak, and his team. 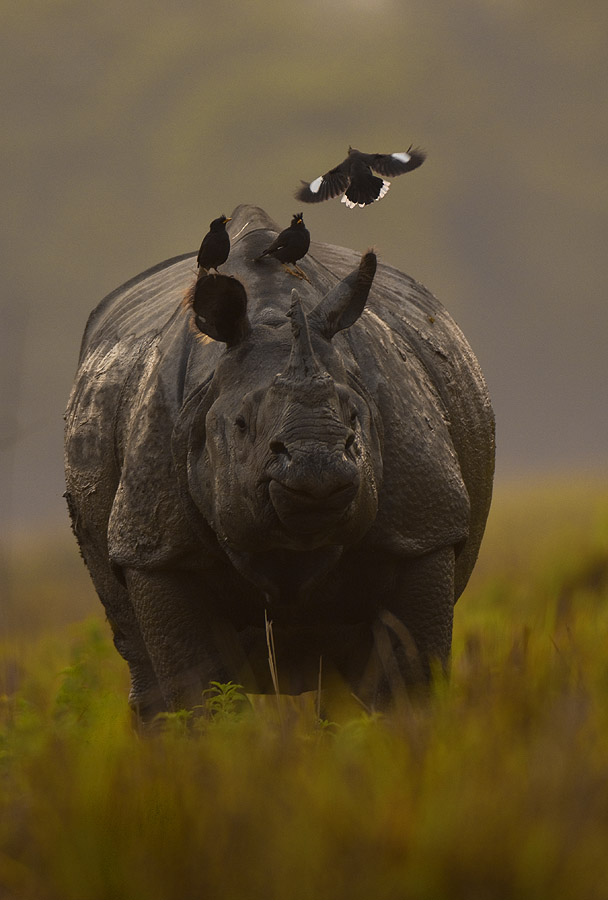 Hunted for its horn, the rhino was driven to the verge of extinction, with less than 200 left by the end of the 19th century. Conservation efforts have revived the species and brought their worldwide numbers to around 3,000 now — the bulk of them in Kaziranga, Assam and Chitwan, Nepal. Photo: Dhritiman Mukherjee

A greater one-horned rhino can leave behind 25 kg of dung in a single defecation. The dung piles they create around the forest not only spread a wide variety of seeds across the landscape, but also fertilise and nurture 20 different types of trees and shrubs. Photo: Dhritiman Mukherjee

While I observe an unusually large midden, a rhino emerges from the tall grasses ahead. I don’t leap from my seat – it is my third day at the park, and I have seen many rhinos already. Instead, I sit back and train my binoculars on it: on the leathery coat that falls over its legs and breaks into warts; the thick folds that protect its neck; at the tall hair that stands on the edges of its ears; and at the horn for which it is mercilessly poached despite the highest legal protections. I watch mynas feed on the insects off its back and clean its three-toed feet. I look at its skin, that resembles a plated armour, but Ali is quick to inform me that it is extremely soft and delicate. Its horn looks like bone but is made of keratin and can grow as long as 25 cm long. “Don’t believe what you see,” Ali warns. “It looks bulky but can run at a speed of over 50 kmph.” The rhino is both grotesque and magnificent. It’s a fierce, hulking giant that weighs anywhere between 1,800 to 2,700 kg, but it is also extremely fragile and vulnerable to constant human interventions, poaching, and reckless development that disturbs its habitat.

Today, the overcast sky is as grey as the rhino’s coat. It has rained all morning in Kaziranga. The wet grassland looks freshly bathed and a startling green. The rhino stares back at me, its ears are pricked up, it takes notice, it checks for danger before slowly walking away.

There are five different species of rhinos in the world — two are native to Africa, and three are found in southern Asia. The greater one-horned rhinoceros is the largest of three Asian species and the second-largest animal on the Indian subcontinent. Its habitat once extended across India, Pakistan, Myanmar, Nepal, Bangladesh, and Bhutan, along the floodplains of the subcontinent’s mightiest rivers — Ganga, Brahmaputra, and Indus. In a recently released book, The Story of India’s Unicorns (Marg, 2018), historian Shibani Bose writes that a profusion of rhinoceros remains can be found at some significant urban archaeological sites. Not only are bones part of the archaeological record, the Harappan visual archive consists of seals and copper tablets that suggest that the animal was seen frequently in the area. Researchers and conservationists Dinerstein and McCracken claim that before 1,400 A.D. at least 476,140 individuals survived in the wild. Today, the number is down to 3,500, and in India its habitat is restricted to Assam, Bihar, West Bengal, and Uttar Pradesh. Yet, the greater one-horned rhino is India’s most successful conservation story. With more than 70 per cent of the population living in the 430-sq-km swampy landscape of Kaziranga National Park, a UNESCO World Heritage Site since 1985, this is its most secure home.

In the early 1900s, the maharajas and British poached and hunted the animal for sport so frequently that it almost drove it to extinction in Assam. Successful conservation efforts have brought it back from merely 90 surviving in the wild in the early 1900s to 2,413 according to the 2018 rhino census. The greater one-horned rhino, previously listed as ‘endangered’ is now down-listed to ‘vulnerable’ in the IUCN Red List of Threatened Species. This is rare. The grey hulk with a single sharp horn is now the state’s most recognisable icon. 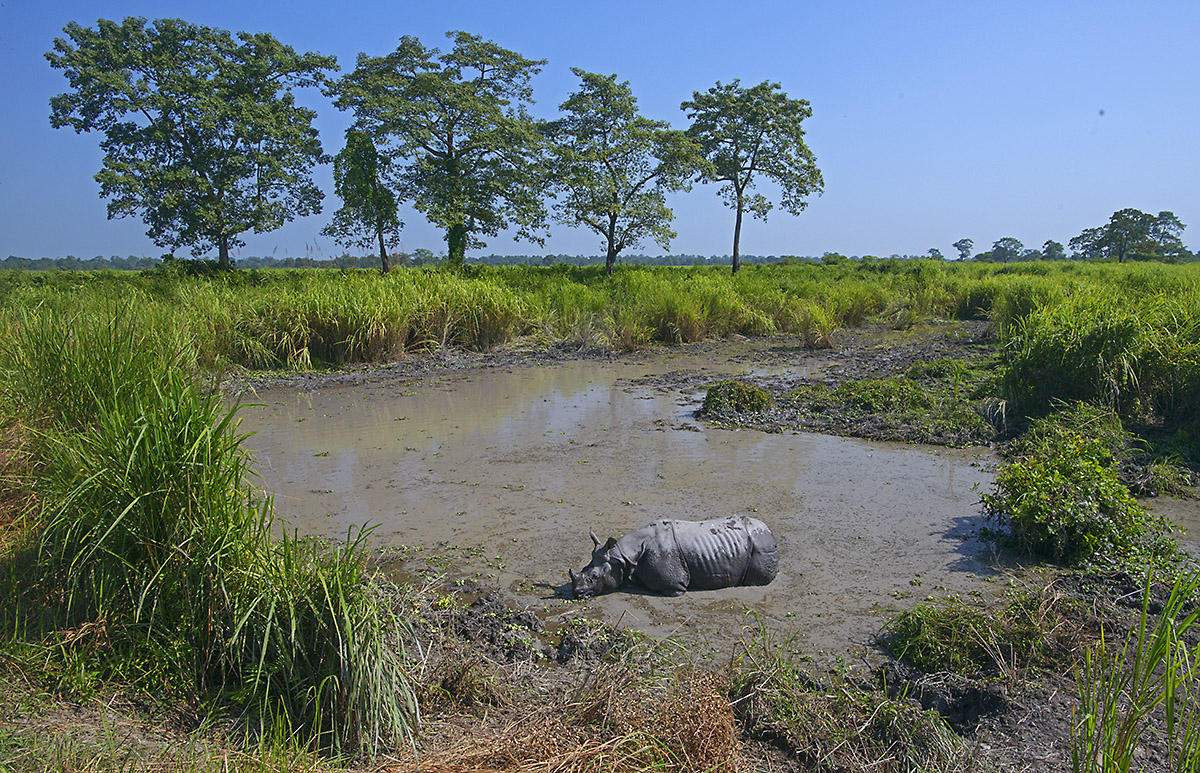 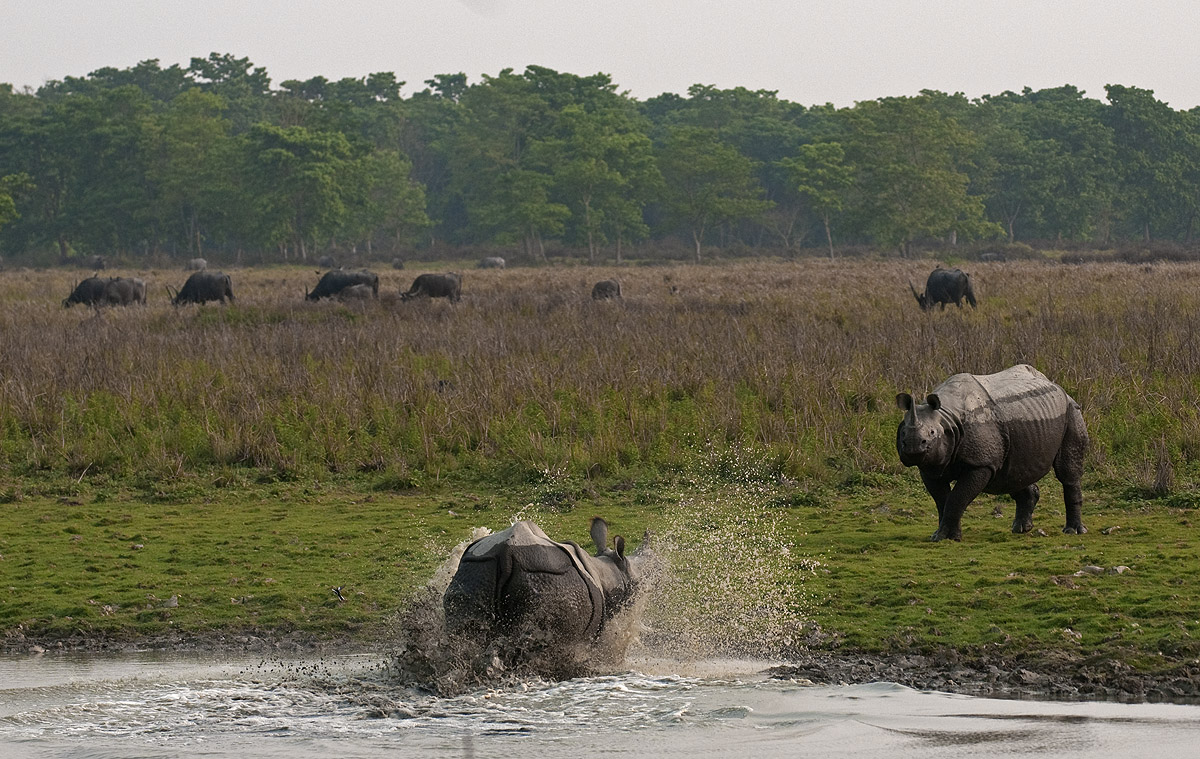 The greater one-horned rhino wallows in swamps for long hours of a hot day to cool off and regulate its body temperature. This is one of the key reasons why it flourishes in riverine, lagoon-ridden landscapes. Photo: Dhritiman Mukherjee

The greater one-horned rhino is a creature of habit. It walks the same paths, marking territory with its urine and dung. Unfortunately, its predictability also makes it an easy target for poachers. Photo: Udayan Borthakur

By now, the sun has disappeared behind the clouds. The Indian roller, a magnificent turquoise-blue bird is entertaining us with its acrobatics — twisting and turning mid-air. We are in our jeep, stalking a large male and his entourage of chirping mynas along a quiet road. “If it feels threatened, one head butt can topple our entire jeep,” says Ali, casually, as we move closer.

Driving through Kaziranga National Park to spot the one-horned rhinoceros is a privilege. The open grassland has a healthy population that does not hide behind deep dark woods. You see it peacefully grazing in the vast open spaces, walking along roads, or settling for a long soak in a swamp. An adult male rhino is a brooding, solitary animal and lives alone in stubbornly defended territories marked by urine and dung. Females move across these territories in search of mates, and live with their calf until the arrival of the next calf. In food-rich areas, a couple of these herbivores may graze together. But if you are traversing through the landscape in bright daylight, there are chances that you will see a large number of rhinos and calves wallowing, splashing, rolling, and caking their body with mud, enough for you to be deeply envious. The rhino spends a large part of its day wallowing in swamps to cool off on hot and humid days, heal its sensitive skin, and ward off parasites. Because it needs to wallow frequently and grazes just as much to support the bulk, it needs grass and swamps, found only around rivers and in floodplains. Kaziranga National Park that lies in the floodplains of the Brahmaputra has grass that grows as tall as eight feet. However, these alluvial, soaking-wet grasslands are just as threatened by the unchecked growth of invasive species, and encroachments on the park. 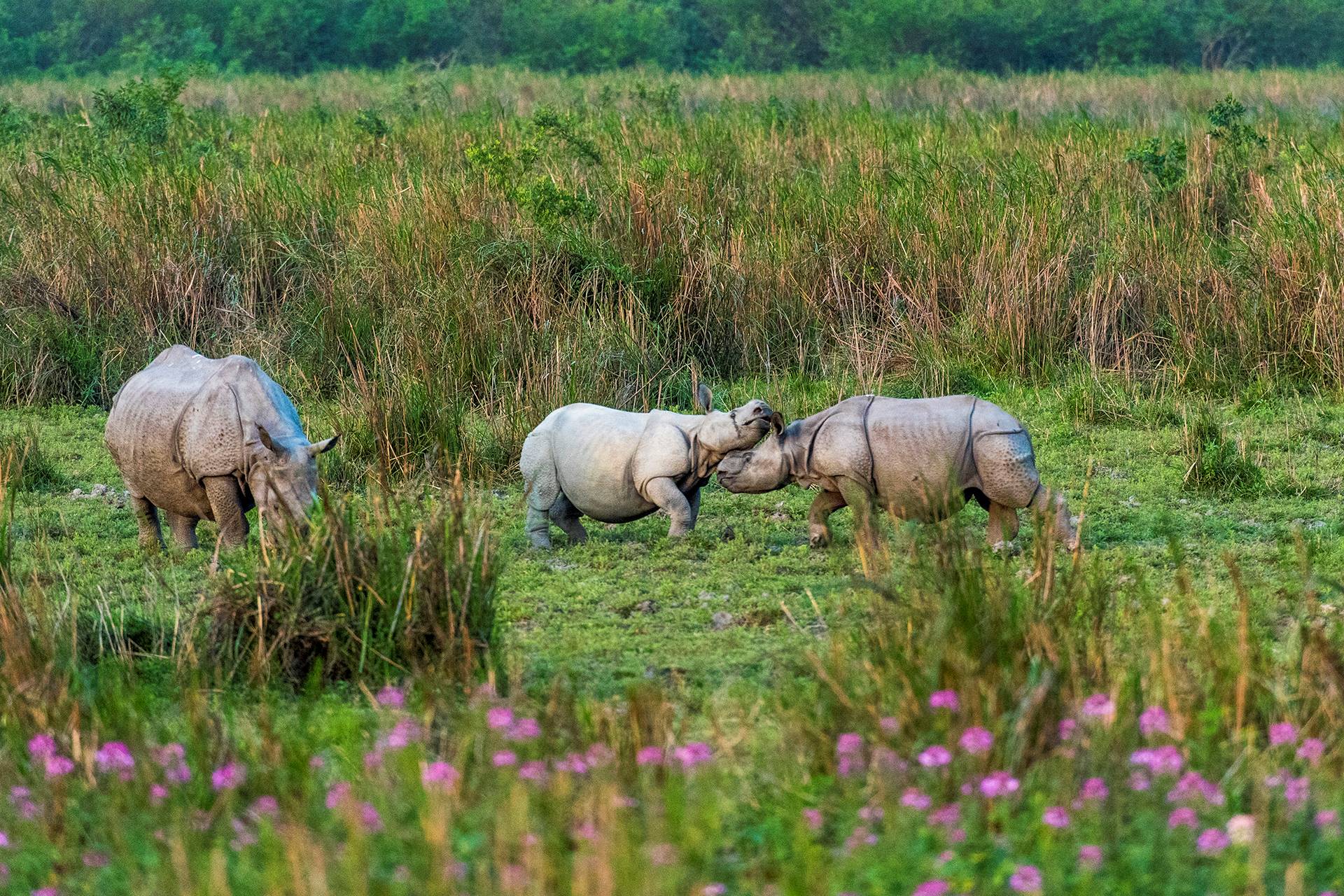 Despite a diminishing habitat and threats from poachers, the rhino survives. It is tough and its only predators in the forest are humans. It is also highly mobile and known to travel across the landscape in search of food and highlands during floods. But most importantly, it survives because it very effectively adapts to changing, dynamic habitats. Every year, the Brahmaputra overflows and floods two-thirds of the park. These floods, though potentially dangerous, restructure and rejuvenate the ecosystem. Over the last 1,000 years or more, the greater one-horned rhinoceros has adapted and flourished in this unstable, yet rewarding landscape. It has evolved into a strong swimmer that can cross dangerous, flooding rivers, or dive deep and feed underwater. During the floods it travels great distances in search of safe higher ground. What it is unprepared for and stumped by is the growing reckless development around the park. When Kaziranga National Park floods, animals move to the adjacent Karbi Anglong Hills for refuge. However, development has sliced this natural extension with the very busy highway, NH37. Grainy images of rhinos walking alone, along NH37, passed by speeding trucks are not rare. Rhinos also get lost in fields and tea estates that have developed along the highway. Several calves, stuck in the park, are known to starve and perish in the flooding waters.

The economy of Kaziranga depends on the survival of the greater one-horned rhino. The 2017-2018 tourist season welcomed 177,431 visitors. Photo: Dhritiman Mukherjee

We must not get too complacent about the conservation success, warns Talukdar, during a conversation with him in Guwahati. “Thanks to the collaborative efforts of the government, NGOs, and local communities, we are doing better, but it is hard to predict what happens — the vultures went suddenly from common to critical within a year. We must stay alert,” he says. As I take my last trip around the park, I realise that the rhino does not just live in the enclosed boundaries of Kaziranga National Park. Ali tells me stories of how his grandmother had never heard of the rhino, but his generation hears little else in Kaziranga. How often do you hear of an animal that has returned from the dead? The story of the rhino weaves itself seamlessly through the history of the landscape and through the myths and legends of the park. It animates the lives, livelihoods, and economy around it. “I’ll survive in Kaziranga as long the rhino survives,” says Ali. “Our fates are tied.”