Green Munia: The Gullible Beauty of the Scrub Forest

The green munia is a brightly-coloured bird with a melodious call — unfortunately its beauty is also its curse. It is still illegally trafficked in large numbers despite its declining population 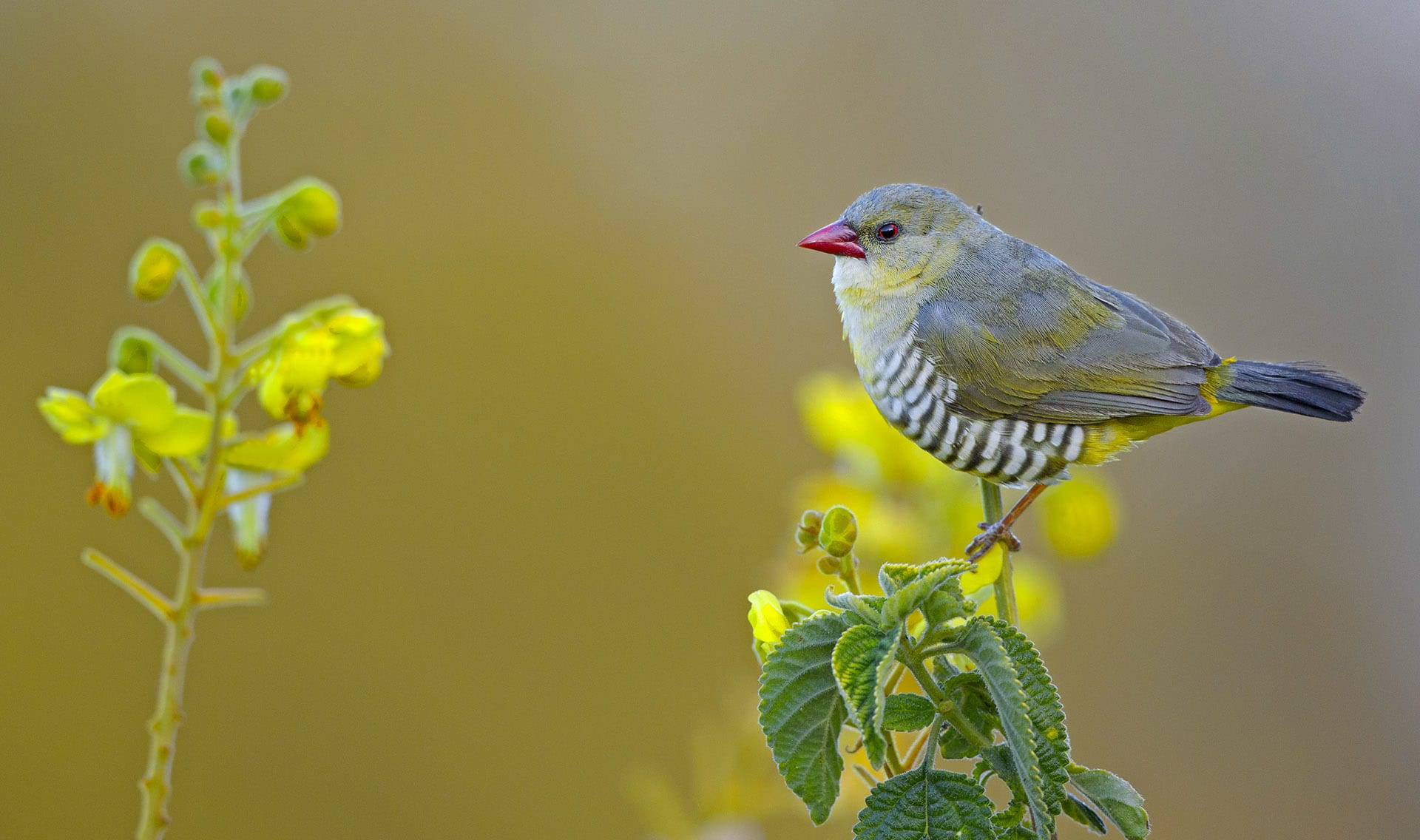 The green munia Amandava formosa is a tiny bird of about 10 cm, with a distinctive green-and yellow colour with black-barred flanks and a reddish bill. Females are duller with indistinctly barred flanks. Owing to colouration and size, it can be easily identified from other munias and small birds.  Its generic name has an interesting story. During the British rule, lots of birds were exported to Europe from Ahmedabad. Amandava is a corruption of Ahmedabad from where first few specimens were obtained. In Latin formosa means beautiful, and beautiful this little bird is! Some taxonomists categorise all munias under genus Amandava or “avadavat” (another corruption of Ahmedabad). This is why the munia species are also called green avadavat and red avadavat (Amandava amandava). However, I prefer to use the old term munia as it sounds more Indian and munia for many people means “little”.

The green munia is the official mascot of Rajasthan’s Mount Abu Sanctuary. It is usually spotted amidst its rocky landscape. Locally it is also known as ‘haria’ after its greenish-yellow wings. Cover Photo: The green munia is a tiny, brightly-coloured bird with a melodious call — a high pitched warble, followed by a prolonged trill. Unfortunately it is these features that have made it a popular caged bird and victim of pet-trade in India.

However, what’s more important than a debate over its name is the crisis this bird is currently facing. This little bird is certainly in great trouble because of its beauty and simplicity. It is a popular cage bird, like all munias, so it is trapped in large numbers. It is also a naïve bird. The whole flock can be trapped easily as it is rather gullible. If a trapper is not able to trap all the birds the first time, the second or third attempt will bring all the birds of the flock in his net. The bird usually hangs around in a small area. As Dr Rajat Bhargava, ornithologist with BNHS and an expert on green munia wrote in my book, Threatened Birds of India in 2012, “Green Munia is a naive bird and can be easily approached in the wild and trapped. Trapped birds if released after a day behave like tame birds and do not fly far. Over a period of three to four weeks, they become so tame in captivity that they start pairing (which takes much longer in other munias).”

Illegal trade is one of the biggest threats to the green munia. Even 250 years ago, large numbers were sent to Europe from Ahmedabad via the Surat port. Export was officially banned in 1981, but Rajat Bhargava found that the bird is still often traded both in the domestic and export markets. An annual minimum of 2,000-3,000 birds were smuggled out of India to Europe and America in the 1990s. High mortality has been noted in trapped birds. Trapping for trade has extirpated several populations.

The green munia is an endemic bird. It found only in southern Rajasthan, central Uttar Pradesh, Madhya Pradesh, southern Bihar and historically up to West Bengal, south to southern Maharashtra and northern Andhra Pradesh. It is resident, very locally and unevenly distributed and on the whole uncommon. It lives in dry scrub forests, scrubby edges of marginal crop fields and uncultivated fields.  It is listed in Schedule IV of the Indian Wildlife (Protection) Act, 1972, whereby its hunting and trapping is totally prohibited. BirdLife International and IUCN list it Vulnerable in the Red List.

Rajat Bhargava who has been studying and monitoring the green munia for almost 30 years has a major project on this species to find its total population in the wild. His preliminary results are not encouraging. It does not exist in most of the areas where he had seen it in 1990s and 2000s, due to illegal trapping. Besides trapping, habitat destruction is also a major reason — no one gives much attention to scrub forests, which is where the munia is commonly found. It feeds on small grass seeds, but thanks to overgrazing, grass is not allowed to reach the seeding stage.

Hunting, trapping or trade of the green munia is an illegal and a punishable offence. It is also protected against trafficking by the Convention on International Trade in Endangered Species (CITES).

Considering its declining status, a conservation breeding programme should be started. In fact, it is already underway by the Rajasthan Forest Department with two pairs in Gulab Bagh, Udaipur. It is just a start. We have to wait for many years before results begin to show. Interestingly, the Green Avadavat Breeders Group under the umbrella of Queensland Finch Society in Australia has been breeding the birds for many decades. Before the export of live birds was banned in India, the green munia was exported to many countries, including Australia.  There is already a stock of nearly 100 individuals there. We need to collaborate with Australians to exchange experience and upgrade our conservation breeding programme. However, if we are successful in breeding, conservation efforts will not succeed unless its habitat is protected and trapping is totally curtailed. Released birds usually disappear as they are either eaten by natural predators or trapped by cunning bird traders.

Conservation breeding is never the first option for saving a species – it is, in fact, the last resort. If it has to be done, it should be done by experts, and at the stage when wild birds are still there. The idea is that wild population would be supplemented by conservation breeding. It has been shown in many such programmes that captive-bred individuals mix easily with the wild birds and also quickly learn the trick of survival in the wild.

The plight of the green munia has again shown to us the plight of many such neglected species (in all taxa, not only birds) that are dying out, unsung, out of view, out of our mind. For every species, we need indomitable conservation champions like Rajat Bhargava. Only time will tell whether Rajat will see his beloved green munia back or only document its extinction.