Migratory gulls are elegant, graceful birds, until they spot someone with a delicious snack

Gulls hail from one of the most successful bird families. Over 100 gull species are found around the globe, on every continent; they are even found on the edges of Antarctica and the Arctic. Here in India, they are migratory, flying down in winter from their breeding grounds in Ladakh and further north, all the way up to inner Mongolia. They scatter and settle over large water bodies and coasts throughout the sub-continent in large querulous flocks, unmindful of the often dreadful pollution in the water. In Delhi, huge flocks seem quite content to spend their winters on the river Yamuna bobbing about happily on the glinting grey water or taking flight in a maelstrom of white wings. 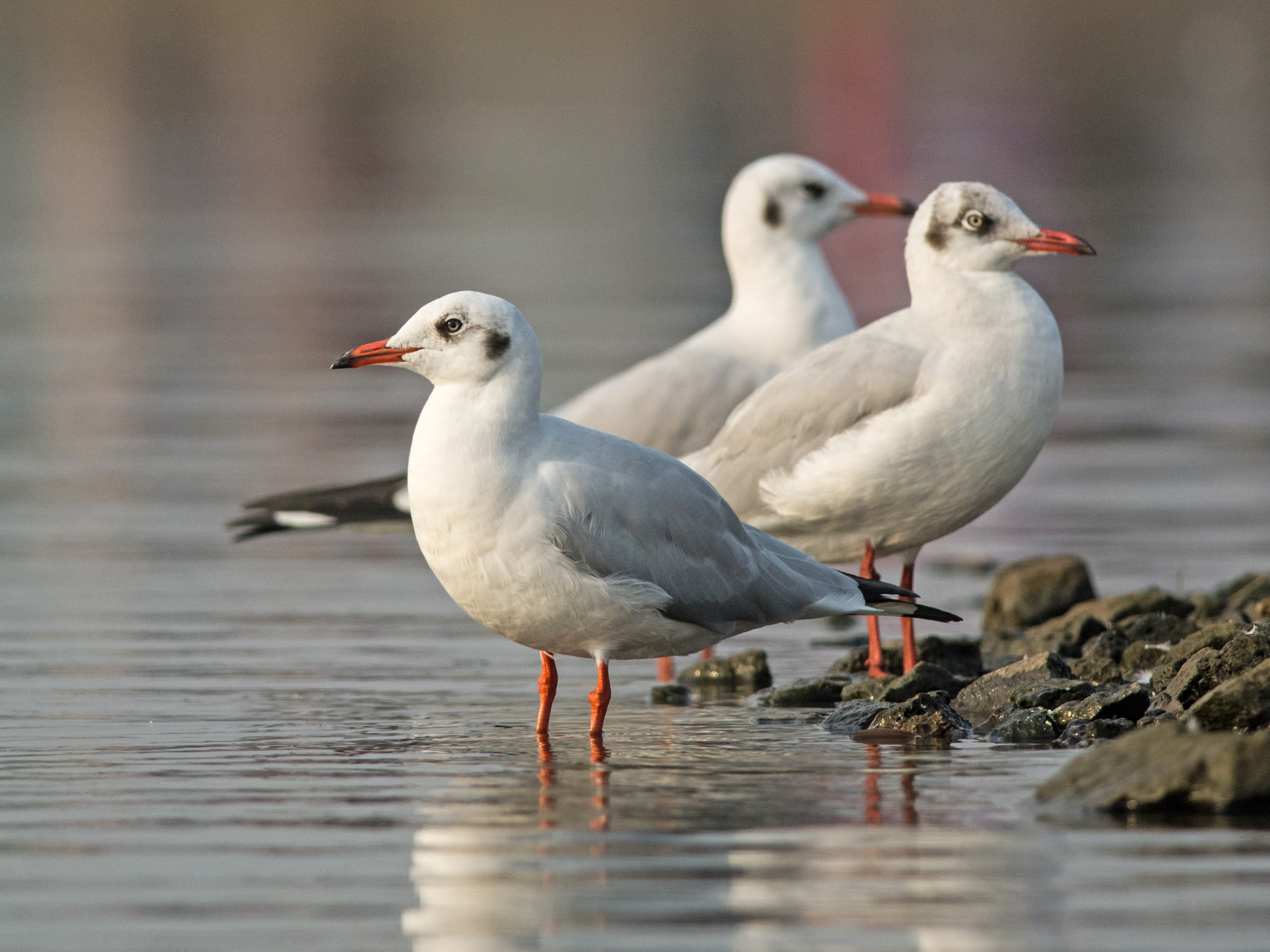 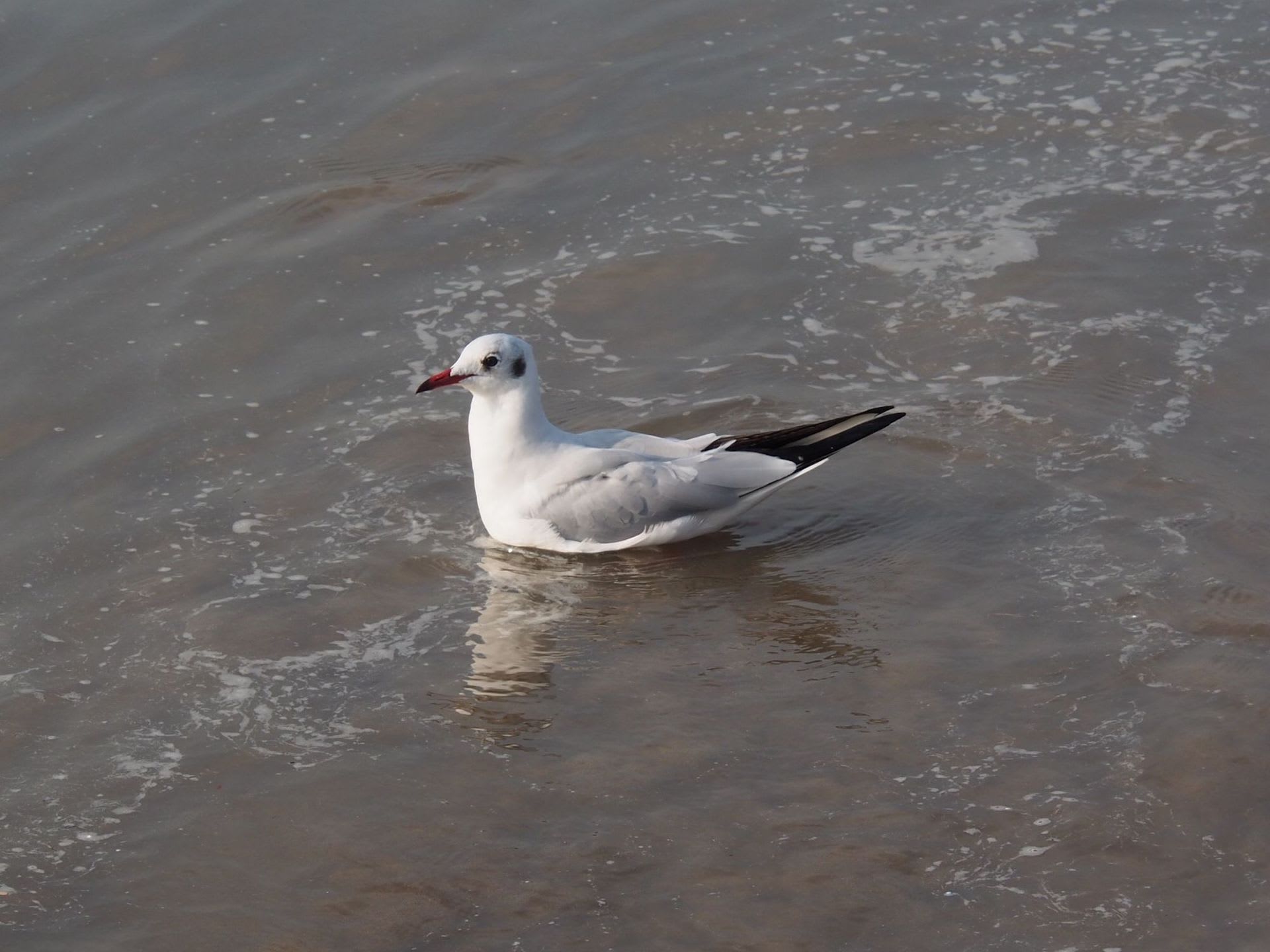 (Left) The black-headed gull loses its dark chocolate brown hood in the winter, when a dark spot can be seen behind its eyes. (Right) A small gull measuring about 34-37 cm in length, it can be seen in coastal, wetland, freshwater and farmland habitats across its range. Photos: Saumitra Newalkar, CC BY-SA 4.0 (left), Pradeep717, CC BY-SA 4.0 (right)
Cover photo: Brown-headed gulls migrate from their breeding grounds in central Asia to the coasts of the Indian subcontinent, southeast Asia and the Gangetic plains during winter. Cover photo: Mayank Soni

If a cop had asked me what I was doing opposite a working women’s hostel with a camera and telephoto lens, I would truthfully have had to say, “photographing gulls”. Which, in any havaldar’s lexicon would translate to “photographing girls” and off I’d be dragged to the thana!

Two species dominate the scene in India — the brown-headed gull, about the size of a pigeon and the slightly smaller black-headed gull. Both these are considered “small gulls” as against the “large” gulls such as the herring gull and Pallas’ gull, which tend to be solitary. In winter, the heads of both, brown and black-headed, turn white. The brown-headed may be identified by the flashy white patches on its black-tipped wings, and the black-headed by the white border along the front edge of its wings. Both are otherwise pearl grey and have curiously dolphin-like expressions on their faces, red bills and webbed feet.

They first caught my attention decades ago in Bombay (as it was then known), when every winter they flocked to a spot on Marine Drive opposite a working women’s hostel, as people used to scatter bread for them here. Armed with my camera and a short telephoto lens, I would wait for them to come winging over from the sea, to photograph them in flight on black and white film. Using a slow shutter speed you could sometimes get lyrical results of wings in motion. It never struck me that what I was doing could be dreadfully misinterpreted: If a cop had asked me what I was doing opposite a working women’s hostel with a camera and telephoto lens, I would truthfully have had to say, “photographing gulls”. Which, in any havaldar’s lexicon would translate to “photographing girls” and off I’d be dragged to the thana! Fortunately, cops in Bombay in those days minded their own business and I was never challenged.

Here in Delhi too I try to make an annual pilgrimage to the river bank to watch and photograph the gulls. Cyclists, scooterists and motorists crossing the river via a pontoon bridge every morning, en route to work, routinely stop and scatter packs of Haldiram’s snacks, shouting “aao-aao-aao” (come, come, come) across the empty water. And there, rising out of the mist from a distance away, you’d see the tumultuous white cloud rise and approach, calling querulously as it hastens over. Many of the birds snap up the largesse in mid-air, others settle on the water, picking up what pitter-patters down beside them. It’s quite a feeding frenzy — with no quarter asked or given. Once satiated, the birds ignore any further calls and wing off to other parts of the river. 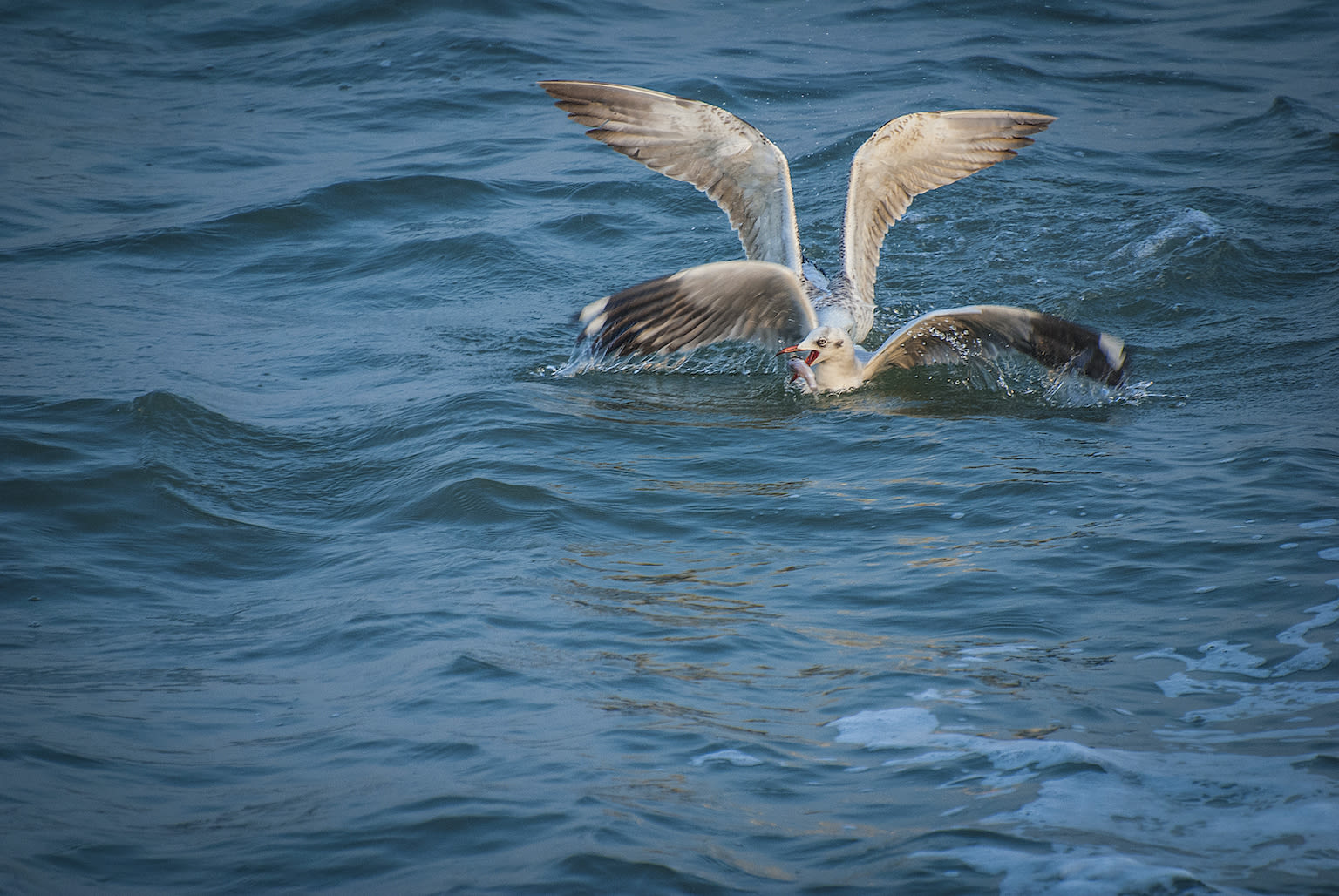 Once I watched enthralled, as three or four birds indulged in what I could only conclude was a game — one bird that had snapped up a piece of floppy black material from the river, flew off with it pursued by the others. Quite deliberately it would drop the piece and another flying just below it, would snap it up before it hit the water and repeat the process. This “passing the baton” game continued for quite a while.

The success of gulls as a species is largely due to one thing — they eat virtually everything and have adapted their diet to suit the changing circumstances. Many have eschewed their fishing habits and prefer flocking around landfills where they tuck into our waste — foodstuff, offal, and whatever else we may discard. They’ll eat everything from traditional fish and crustaceans, to molluscs, earthworms, small invertebrates, rodents and even small birds and animals. In the West, they seem to have developed a taste for French fries and will snatch them off your plate given half a chance. There have even been reports of whacking great herring gulls making off with small dogs and cats and attacking pensioners — so much so that they have been declared a public menace in several small coastal towns. They are not very popular in fishing villages and ports where they mob boats and snatch whatever they can of the catch being hauled in. Some years ago, I watched a huge (its wingspan can exceed 5 feet) Pallas’ gull wing its way over a water body at the Yamuna Biodiversity park in Delhi and there was something quite menacing about it. It flew over, turning its head this way and that, eyes implacable and glassy — clearly in hunting mode. It circled the lake two or three times, before winging away — probably towards the river nearby.

Seagulls are observant birds that do not pass up an opportunity for free meals as seen in these images from the Yamuna river in New Delhi (left) and a ferry on the Mumbai-Alibaug route (right). Photos: Naveen Macro/Shutterstock (left), Mayank Soni (right)

Gulls are monogamous — partners stick by each other, and both parents share all the family chores such as incubation and feeding (by regurgitating). Usually three eggs are laid on a pad-like nest over a bog, located in a huge, noisy colony. Chicks usually only attain their adult plumage in around two years.

As a whole, gulls are doing well in the world — with just a couple or so of species being considered endangered. Ironically however, in the West, numbers seem to be falling because landfills in big cities are being closed down. Here in India, with our tradition of feeding the birds that doesn’t seem likely. They will turn up by August and September and leave by March-April, now snazzily clad in their pearly plumage and contrasting coffee-brown and black heads. They are the epitome of grace while flying and have inspired writers such as Richard Bach (‘Jonathan Livingstone Seagull’) and yet when flocking over for a handout can behave disgracefully. It’s not really done to snatch a packet of crisps clean out of your hands, or to take a peck out of your head just because you didn’t have any to offer them.