“Birds in Ladakh? No! There are none!” was the refrain from many a tourist I encountered in Leh, when I mentioned that I was there to look for birds. The casual tourist can be forgiven for not realising that this high-altitude desert, with its unforgiving climate and seemingly hostile and barren environment, is actually a preferred birding destination. Every avid birder seeks to visit Ladakh, for it hosts several rare species not found anywhere else in the country. While the spectacular landscapes take one’s breath away, encountering Ladakh’s fauna may come as a revelation to the beginning birder. The drastic difference in climatic conditions between the summer and winter months means that the area attracts a variety of species at different times of the year. Many passage migrants transit through the region during spring or autumn, on their way to breeding or wintering grounds. 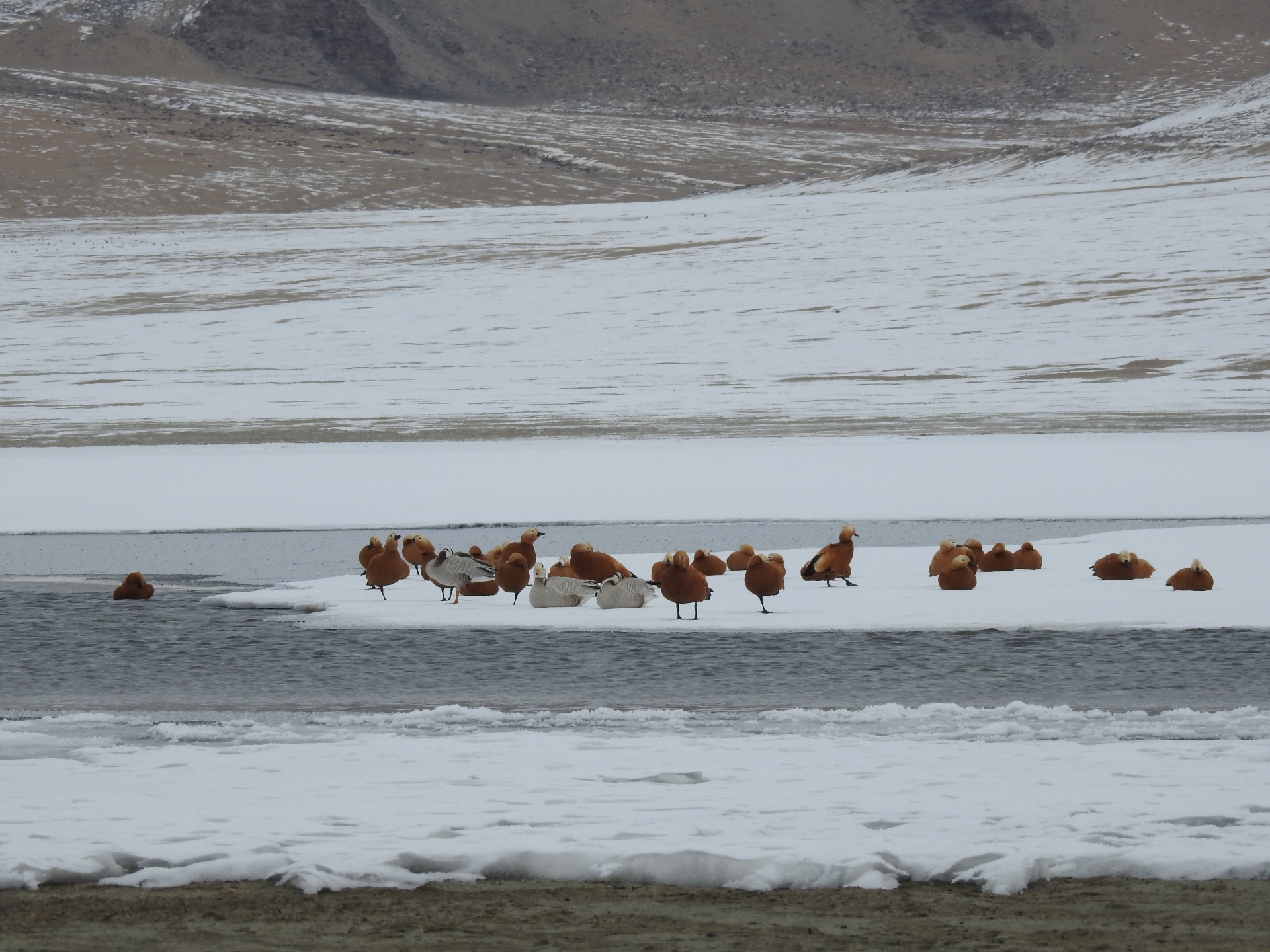 The high-altitude wetlands of Ladakh serve as breeding grounds for bar-headed geese who often migrate together with brahminy ducks, and arrive in India around February-March. Photo: Lobzang Visuddha One of the highest fliers in the world, bar-headed geese have been recorded at heights over 7,000 m. Cover Photo: Emily19/Shutterstock

Ladakh has several marshy areas and high-altitude lakes, which naturally become hotspots for migrating and breeding birds. One of the most fascinating species that makes Ladakh their summer home is the bar-headed goose. Large numbers congregate around Lake Tso Moriri, where they breed between April and October. They spend the winter months in the wetlands of the Indian subcontinent. In the process, these birds fly over the Himalayas twice a year.

It was on my third visit to Ladakh in 2010 that I first visited Lake Tso Moriri. My first visit to Ladakh had been in 2003, when there were relatively fewer tourists there. Even in 2010, most of the tourists made a bee-line for Pangong Lake, where part of the film 3 Idiots was filmed, and left Tso Moriri alone.

Bar-headed geese can be easily sighted during the summer months in wetland habitats such as Tso Moriri (in picture), Tsokar, Hanle, Chushul and the Upper Indus Basin in Ladakh. Photo: Dmitry Rukhlenko/Shutterstock

On this third trip, we reached Tso Moriri by road from Leh, a day-long journey over horrendous roads, five of us crammed into a Toyota Qualis. En route we had stopped frequently as we encountered several birds and mammals — common mergansers in a fast-flowing stream, groups of chukars, the ubiquitous horned larks and marmots. We reached Tso Moriri late in the evening, with just enough time to marvel at the turquoise blue waters of the lake at sunset.

Next morning as we set out to look for birds, we were thrilled to find several pairs of bar-headed geese walking along the edge of the lake with their young in tow. Bar-headed geese lay their eggs in ground nests. They usually live in small family groups, to avoid predation. These birds, with their distinctive black-and-white neck pattern and short orange legs, looked almost comically like a family out on a morning stroll. 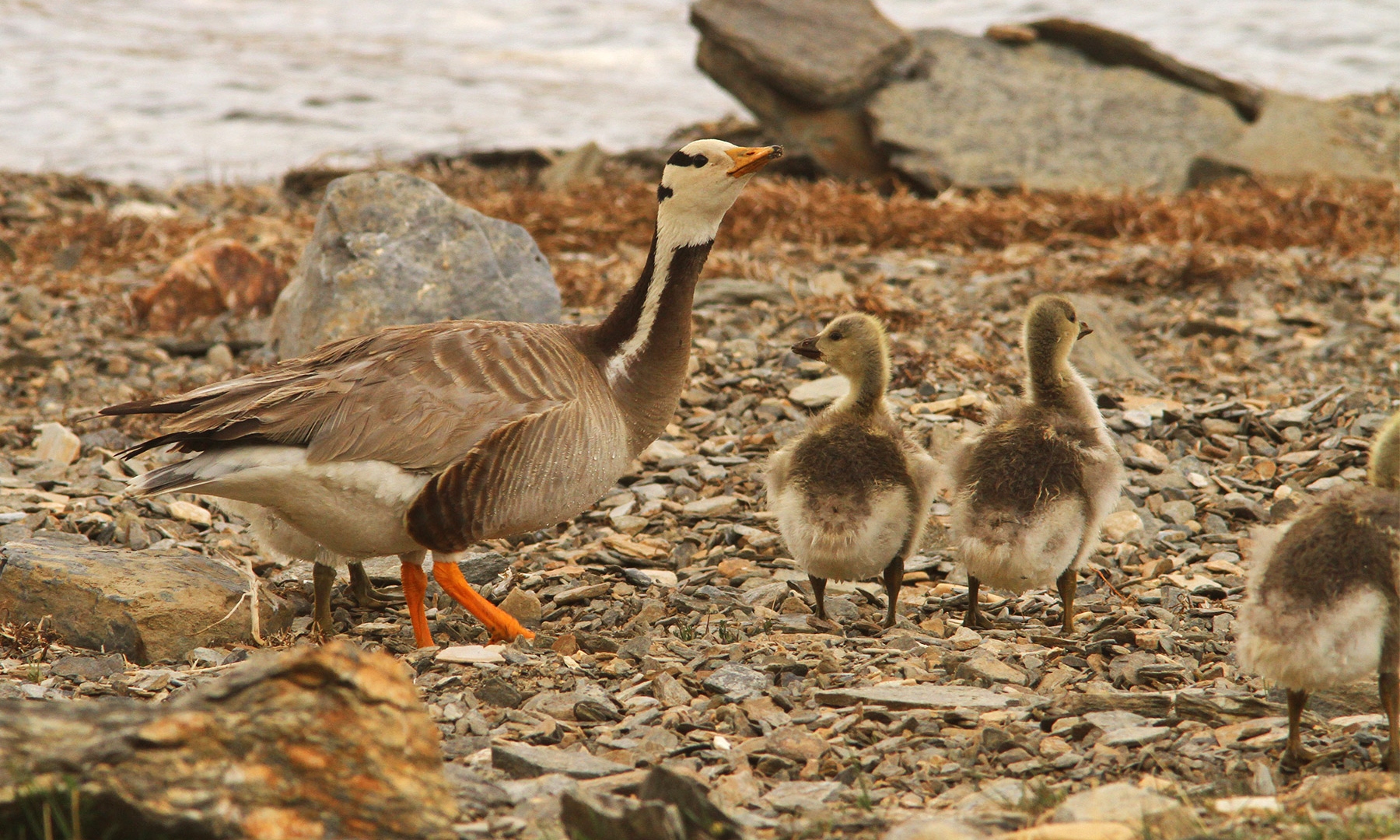 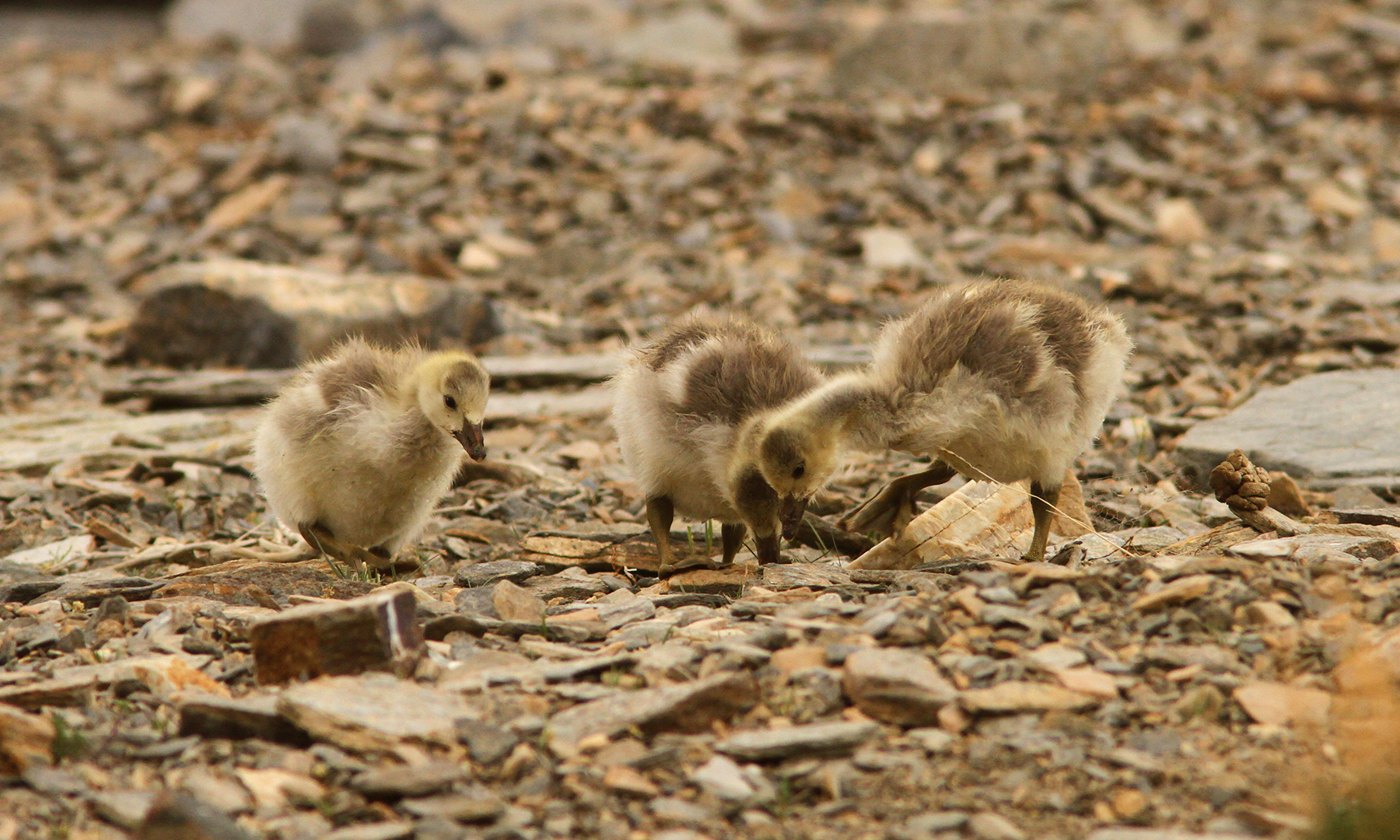 A brood of bar-headed geese may comprise four to six goslings, who leave the nest aged around two months, and learn to feed on their own. Photos: Garima Bhatia

The goslings walked tentatively by their parents’ side, and stopped occasionally to pick up insects or grass from the ground. The parents were alert and constantly on the lookout for their safety. It was inconceivable to think that in just a few months these vulnerable-looking little balls of fur would be ready to undertake one of the most remarkable migration journeys of the avian world. Would they be able to withstand the intense physiological demands that high-altitude flight entails?

Recent research has used satellite telemetry to track the migration of bar-headed geese from Mongolia to India, showing that these birds can sometimes reach altitudes of 7,000 m and above. Indeed, early mountaineers have reported seeing bar-headed geese or hearing their honks crossing the highest peaks. According to the accounts of George Lowe, who accompanied Sir Edmund Hillary in 1953, they were spotted flying over Mt Everest.

At those altitudes, the oxygen in the atmosphere is about a third of the oxygen available at sea level, and temperatures are well below freezing. Most mammals would have trouble breathing, while these birds manage to fly for several hours nonstop. They have been reported to climb from sea level to 4,500 m in under eight hours, achieving speeds of up to 150 kmph. How do they do it? We now know that bar-headed geese have several physiological adaptations, which enable them to survive these extreme conditions. Some of them include a very large heart with a high density of capillaries which deliver oxygen to the muscles, and haemoglobin that has a high affinity to oxygen. This enables them to meet the oxygen demands of flight, which is ten to fifteen times of the oxygen needed at rest. It enables them to function at high altitudes without the need to acclimatise. They also fly at night, when the air is colder and denser. Many questions still remain to be answered though, about what enables and drives these birds to routinely undertake these challenging feats of endurance.

Two horizontal black stripes on the back of their heads earn the bar-headed geese their name. Photo: Vinit Bajpai

Bar-headed geese are classified as “Least Concern” on the IUCN Red List, but their numbers are decreasing globally due to habitat loss, climate change, and hunting. The loss of wetlands on the Indian Subcontinent has had a direct impact on their populations, and there have even been reports of feral dogs hunting these geese at their wintering grounds. The threats to these birds seemed obvious to me on my next visit to Tso Moriri in 2012. In just a few years, a large number of hotels had come up, the number of tourists increased, and no sign of any breeding birds could be seen. Perhaps the breeding families had moved to less disturbed areas.

As we continued to watch, the parents took their offspring into the azure blue waters of the lake where they swam blissfully unaware of the challenges that lay ahead. We sent up a prayer for their wellbeing and marvelled at the capabilities of these super-achievers. Next time you see a bar-headed goose at a wetland near you, take a moment to admire and appreciate these remarkable birds and the beauty and wonder in this planet we call home. 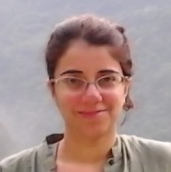 is a chemical engineer by training and a nature lover by passion. She works with Nature Conservation Foundation where she leads a project called Early Bird which aims to introduce children to birds.