Getting Into a Huddle: The Himalayan Marmot Family

These cute, furry rodents of Ladakh are inadvertent ecosystem engineers

The first sight of Lake Tsokar is breathtaking. The road seems to wind to infinity, then it suddenly drops off from between rugged mountains, and the high-altitude cold desert ecosystem of the Changtang Plateau pops into view. Stretching across it is a salt lake that is blue in colour. Located at almost 15,000 feet above sea level, Tsokar Lake is surrounded by a combination of marshy, salty plains, pasture land, and soaring mountains.

It was day five on my foray into this region of Ladakh. The wind on the Changthang Plateau is icy as it comes across the lake. It cut straight through to me, making my eyes water. It was nearing the end of summer, and I looked forward to spending a few days taking long walks along the lakeshore, tracking animals, and enjoying being on the roof of the world. Kiang galloped in the distance, while a pair of black-necked cranes hovered protectively around their chick. Ruddy shelducks dotted the surface of the lake, and I spotted deep heavy prints of wolves running along the marshy plain. A few voles darted away as I stepped around their small burrows.

Being a journalist for over 20 years I had visited Ladakh several times before to film and do stories for my show Born Wild on NDTV, covering the kiang, Changpa nomads, black-necked cranes, and snow leopards. But I’ve also been a nature lover most of my life and since my happy place is nature, I tend to travel to the same places that my work has taken me, of course without the stress.

Despite numerous previous trips to this region, I had never seen the snow leopard or the Himalayan marmot. The snow leopard, I knew, would require another trip, but on this one I was determined to find the marmot. Searching for and tracking a wild animal brings me great joy, and the thought of seeing Himalayan marmot was exciting. 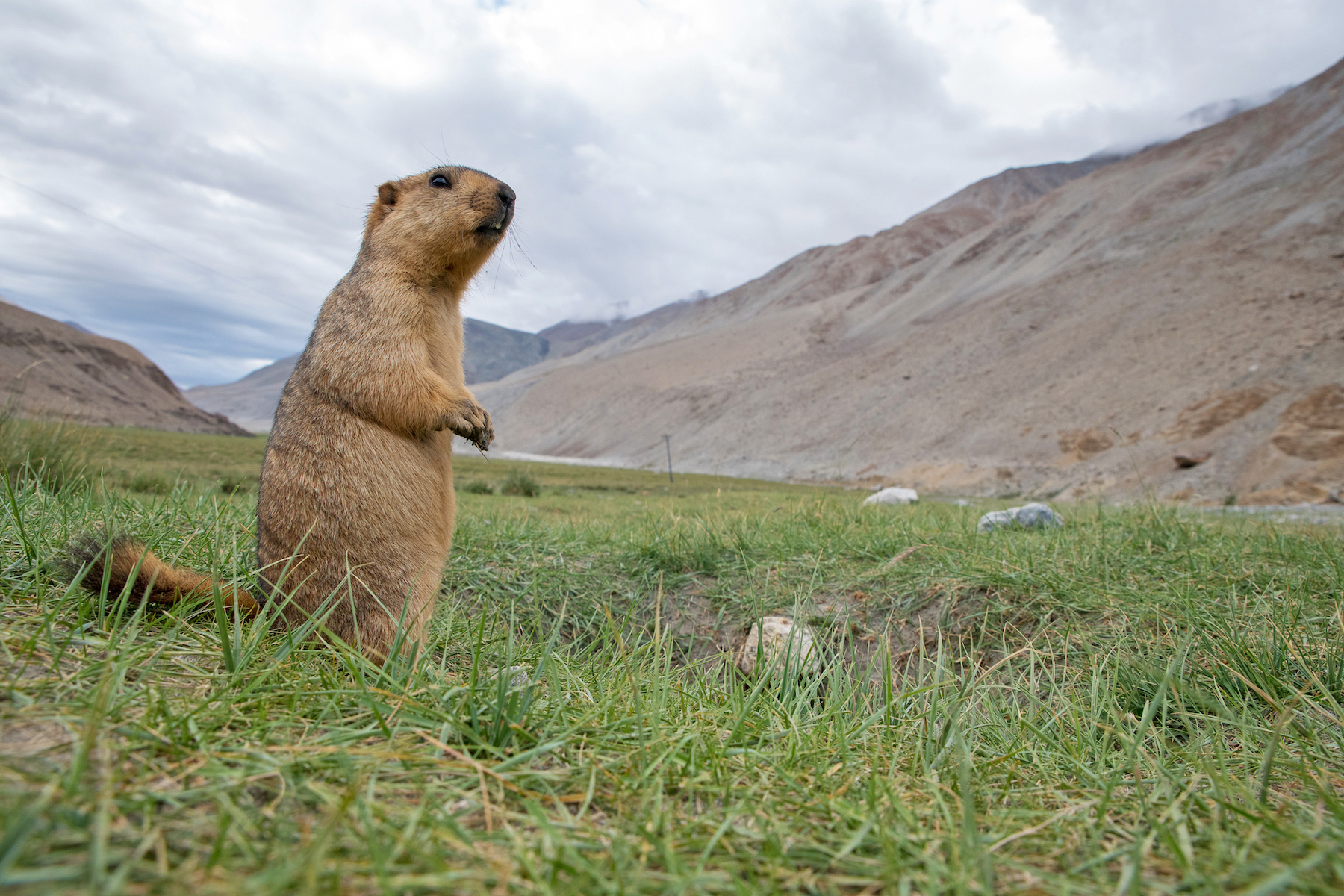 When they are outside their burrows, some marmots will be on high alert, scanning the area for predators. They stand on their hind legs for better visibility on the ready to warn others and run into a burrow. Photo: Saurabh Sawant Himalayan marmots live in groups of up to 30 individuals, who communicate with each other using whistling and chirping sounds. Cover Photo: Surya Ramachandran

To some marmots may not seem like the most glamorous of animals, but to me every animal is interesting, with its quirks and behaviours, and lives rich and varied. Though Himalayan marmots are listed by the IUCN as animals of ‘Least Concern’ due to estimated numbers and distribution, it still takes patience to spot them. My earlier trips to Ladakh had coincided with their hibernation, during which they sleep in burrows for close to seven months. But since this was a summer trip, I was hopeful.

Off-roading is quite popular in Ladakh, but walking is the best way to get around, as it does the least damage to the ecosystem. Off-roading damages the soil and fragile plant life, and kills smaller animals. The high altitude also makes it difficult to breathe easily and walking is a slow process, but can reap rich rewards. On my first day I had no luck, but I had two more days and plenty of patience.

On day two, I scanned the plain in front of me with my binoculars as I walked. Even though at this time of the year marmots should be active in the daytime, the area is vast and they are not found everywhere. They dig burrows in soil that is both soft enough to excavate and yet firm enough not to collapse and bury them. Which is why, unless you know exactly where to look, it’s easy to miss them.

When marmots are in their comfort zone they will often rest on their bellies near their burrows. Photo: Imran Shan

Pulling my jacket closer, my cold, clumsy, gloved fingers awkwardly handled my binoculars, while wiping the tears that the wind had brought to my eyes; I crouched and waddled around looking closely at the ground. Afternoon quickly sped towards evening as I explored different locations around the lake.

It was about an hour before dusk when a sudden movement caught my eye. A large, brown creature scampered around, blending into the landscape. Could this be it? I lay on the ground on my belly, peering intensely through the binoculars. A chubby face came into view, curious glimmering eyes and a quivering nose completed the picture. I felt a rush of satisfaction and excitement on seeing my first marmot. It looked adorable and supremely cuddle-worthy. No matter how cute, I kept my distance, respecting that it was a wild animal.

Soon there was a group of them scurrying about. Marmots are a type of ground squirrel and belong to the rodent family. They feed on grass, fresh shoots, and roots. Their predators are Tibetan wolves and snow leopards, as well as golden eagles. Himalayan marmots are among the largest marmots in the world and can grow up to ten kilos in weight. They gain body weight before they hibernate and this group was really rotund. When they came out en masse, one stood as a sentry on guard.

Marmots build extensive underground burrows and a family can have over 30 individuals living in one long convoluted burrow. Their habitat, while spread out across alpine meadows of the Himalayas, rarely goes higher than the permanent snowline. As they need a very specific kind of soil for their burrows, several marmot families can be found in close proximity to each other and may form colonies. They rise up on their hind legs and stand straight if they want to look out and lie on their bellies when relaxed.

Watching this group, I could identify the territorial pair, as the most elaborate greetings were reserved for them. The others seemed a mix of adults and sub-adults. If there were babies, they were still probably underground.

Marmots have an affectionate greeting ritual, which involves rubbing their noses and heads together. Photo: Saurabh Sawant

To keep warm marmots tend to huddle together when they hibernate. The mating season occurs typically in early spring with a gestation period of a month. This gives the female enough time to recover her health and gain sufficient weight before hibernation. It also allows the babies to be weaned before hibernation. Babies are cared for even by unrelated adults.

Any kind of stress alters the reproductive pattern and sexually mature adults may skip having babies altogether. Their burrows also afford other animals shelter in the cold and wet seasons. The soil they excavate when building burrows and the rocks they move aerates the land, allowing more moisture absorption, and providing food for smaller foragers. As herbivores, marmots also act as active seed dispersal agents of alpine meadows. They are small ecosystem engineers.

While I watched this small group of marmots, I suddenly heard an alarm cry — a series of shrill chirps —and they all dashed into their burrows. I scanned the area and the sky for predators and spotted a few free-ranging dogs. Stray dogs have, in recent years, become a big problem in the area. Unchecked tourism is a problem too. Especially with thrill seekers driving large ATVs everywhere, damaging the fragile ecosystem and churning up the soil. Tourists leave trash around and even throw food at the marmots to tempt them out of their burrows for photo opportunities.

Feeding any wild animal is an unhealthy practice that all tourists must completely stop. Not only is it unhealthy for the marmot or other animal, it creates dependence, leads to increased road kill as animals seek out cars and other human habitation, and can lead to injury or the spread of disease. Photo: Dhritiman Mukherjee

Feeling aggrieved on their behalf I chased away the stray dogs. Once the dogs were gone, a few marmots reappeared. For a moment a marmot and I locked eyes, just one creature to another. Except, in its eyes was all the wildness and wonder of nature, and my eyes were apologetic for being part of the species that is erasing the best of our planet. In the next second, both the sun and the marmot vanished. In the gloaming I walked slowly back to my car, which I had left by the road, heavy with the knowledge that even here on the roof of the world change was coming fast and not for the better. I believe we have a small window, in which we could do better for our natural world. But as the car engine fired up and I drove towards my tent, I wondered if we would.