This tiny graceful ape, hangs on to one of the last protected bastions of its native habitat

“Hook hook hook-ooo”. The soulful call rises in a crescendo, piercing the silence of the forest like an arrow. Another voice joins in shrill bursts. The pair sings in unison, resulting in an ensemble of whoops and shrieks of varying frequencies.

The maestros at the source of this 20-minute orchestra are invisible, concealed deep within a forest of lofty hollong and ficus trees. The closest I’ve come to hearing sounds like this is at the tail-end of particularly raucous parties. But it’s just about 9 am, and there are no party animals here in Assam’s Hollongapar Gibbon Sanctuary.

In the 20.98-sq-km semi-evergreen forest, I have just heard the song of the endangered hoolock gibbon. As the only apes found in India, hoolock gibbons are the sanctuary’s flagship species, and their call is among their most enigmatic features.

In his book, ‘Hoolock: The Ape of India’, primatologist Dr Dilip Chetry writes, “On an average, hoolock gibbon groups sing at least once every two to four days.” Research suggests that the main function of the gibbons’ call is to demarcate territory.

The forests of India’s northeastern states are the habitat of this rare primate. The species is further sub-divided into the western and eastern hoolock gibbon. The Hollongapar Gibbon Sanctuary is one of the last strongholds of the western hoolock gibbon, which the IUCN (International Union for Conservation of Nature) lists as an endangered species on its Red List. Though the sanctuary is said to have one of the densest populations of the small ape, the latest census results from 2019 show only 77 individual hoolock gibbons remain in the forest. A worrying indicator, as at last count in 2008-09, there were 106.

I’m surprised to learn that hoolock gibbons are classified as apes. To a layperson like me, the common perception of apes is that they are hulking beings that are sufficiently agile on land. However, the shy hoolock gibbons are none of these things. The pint-sized creatures grow to about 1.5 feet tall, and weigh less than 7 kg. They are entirely arboreal, traversing the jungle’s crown like magnificent little trapeze artists. 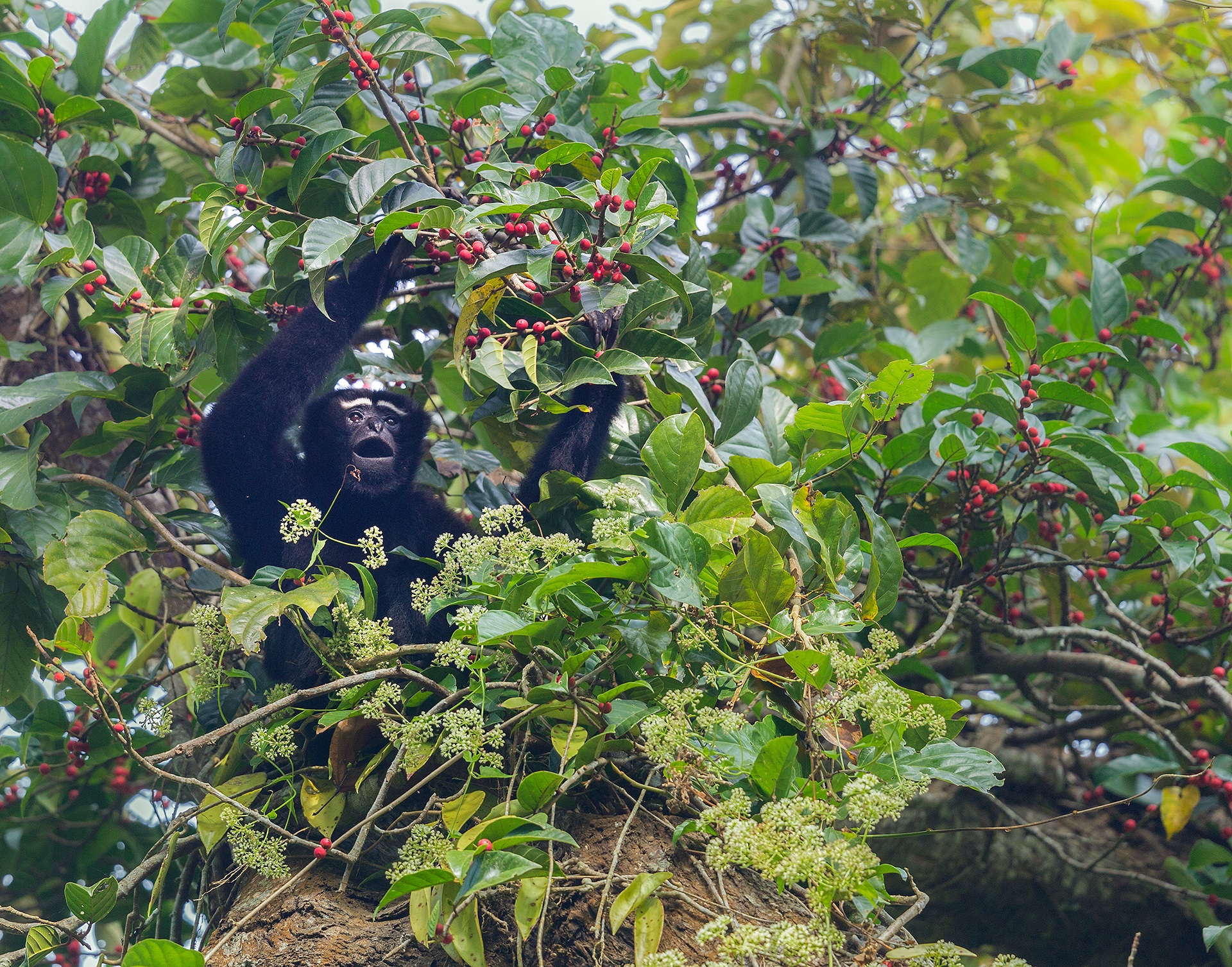 Fruit is a major part of the hoolock gibbon's diet, supplemented by leaves, shoots and flowers. Photo: Arindam Bhattacharya

Unsteady on their feet, they almost never descend to the forest floor. For unrestricted movement, these residents of the uppermost branches need contiguous canopy cover. They use their incredibly long, floppy arms to swing between branches in a form of locomotion called brachiation. As forests shrink into disjointed patches, the apes are confined to increasingly smaller fragments. Habitat loss — which isolates gibbon groups and impedes reproduction — is a major threat, causing a decline in numbers.

On my first foray into the sanctuary, knowledgeable local guide Pradeep Baruah introduces me to the forest’s most popular primate, without any actual face time. As we walk the narrow trails, he picks round, red-green fruits off the forest floor. “Ficus fruits are gibbons’ favourite”, he says. The apes are mainly frugivorous, meaning they prefer sweet and juicy fruits, but also snack on leaves and new shoots. Moisture-laden fruits like that of the ficus, and water collected in tree holes act as the apes’ water source.

I nearly bend over backwards trying to look up the length of majestic hingori and hollong trees that tower into the upper canopy. Pradeep da points out these ‘lodging trees’, where gibbons prefer to sleep safely away from potential predators like leopards. When it’s time to call it a day, the apes will carefully choose a sleeping spot — only the tallest branches make the cut — and a family will usually occupy the same tree.

The officials and guides who live in proximity to the forest often anthropomorphise the little apes. They tell me the creatures ‘marry’ — meaning they pair up with a mate and remain monogamous. Social structures are similar to human nuclear families: a male and female pair live with and nurture their young, until they grow into adults at the age of around seven to eight years. When the time comes for a newly minted adult to find a mate, they venture outside family lines to find a partner.

Females gestate for around seven months, and birth a single offspring once every three years. A hoolock gibbon family typically consists of three to four members: the parents, a juvenile, and a baby. Currently, the sanctuary is home to 23 families.

Considered one of the most endangered primates in the world, the western hoolock gibbon is precariously hanging on to survival in a few protected areas in India’s Northeast. Photo: Dhritiman Mukherjee

The gibbon's long, slender arms allow it to swing from one tree to another, covering up to six metres in one swing. Photo: Arindam Bhattacharya

On my second day in the forest, I finally meet a gibbon family of four. A small, glossy black figure hangs from a tree branch using one long arm. From a distance, its silhouette almost looks like a human child, with a short torso, little legs, and no tail. With the grace of a gymnast, the male gibbon swings into the canopy. I scramble deep into the foliage with Pradeep da, who soon spots the rest of the family.

Snacking on the contents of a rudraksh tree, I see a tan-hued female gibbon, with a cream-coloured baby attached to her. A little distance away is an energetic juvenile with a dark-coloured coat.

A baby gibbon's milky white fur turns black when they are between one to four months. At puberty females turn a tan brown while males remain black. Photo: Arindam Bhattacharya

While male and female hoolock gibbons can be easily distinguished by their black versus brown coats, all juveniles have blackish fur from the age of a month until they are about five years old. Without venturing too far, the young adult maintains some distance from its parents — a behavioural trait Pradeep da ascribes to its adolescence. 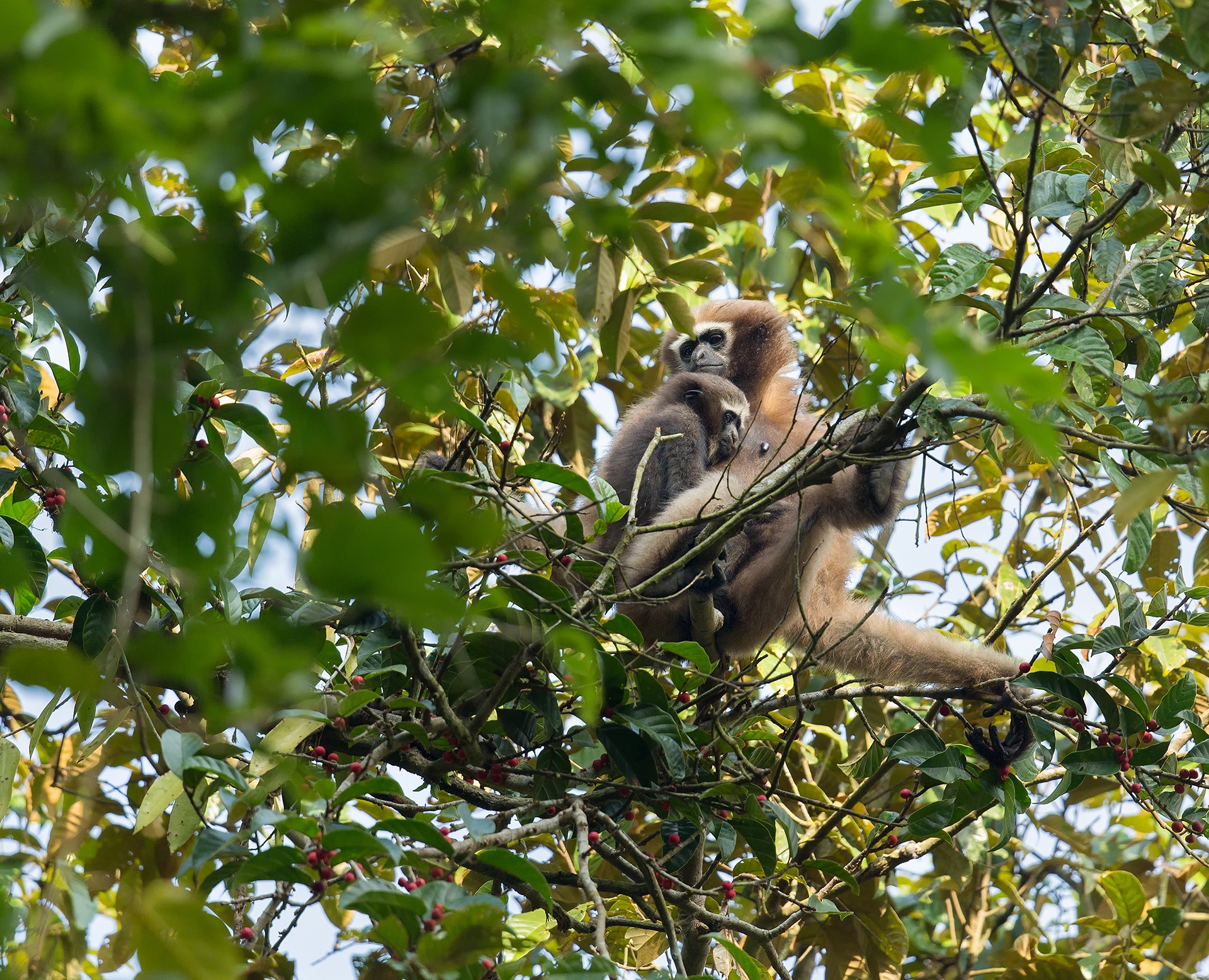 The single offspring that females give birth to every two-three years stays with the family group till it is around seven to eight years old. Photo: Arindam Bhattacharya

We watch from a safe distance as the apes eat, itch, stretch, swing, and go about their day. It is truly magnificent to see them fly through the canopy. Unsurprisingly, they are called the acrobats of the forest. Though we are very still, the male spots us. As he slowly turns his ebony face to look down at us, I clearly see his beetling white eyebrows.

Of similar sizes, male and female hoolock gibbons can be differentiated by the colour of their dense hair — black for the male and copper-tan for the female. A male and female will form a monogamous pair that stays together for several years. Photo: Udayan Borthakur

The reticent creatures are not habituated to human presence and can react when provoked. While they can’t hurl insults, Pradeep da tells me it’s not unheard of for the apes to fling faeces at humans who annoy them.

Hilarious as it may be to picture such a scenario, the circumstances are sobering. Surrounded by tea estates and villages, the shrinking forest is plagued by habitat loss, fragmentation, and human pressures. This is the only sanctuary in India named for a primate and dedicated to the protection of the hoolock gibbon. Will it be able to safeguard the 77 that remain?

Swift and agile, the hoolock gibbon is well adapted to an arboreal life. It rarely steps down to ground level. Photo: Dhritiman Mukherjee