Hornbills of India: Encounters to Remember

India has nine enigmatic species of hornbills, spotting even a couple in their dense forest habitats is a memory to behold

If you’ve ever longed for green hills, birdsong, abundant wildlife and a dreamy weekend, the Nilgiris almost never disappoint. Langurs, Nilgiri tahrs, Indian gaur, leopards, squirrels and elephants, along with hundreds of species of birds, reptiles, amphibians and butterflies make this region one of the greenest and richest slices of the country. On a long weekend in February nearly a decade ago, a friend and I had parked ourselves in a homestay at Coonoor surrounded by rolling hillsides of tea plantations. The house was cocooned by impenetrable foliage which gave us a feeling of remoteness; and the forest seemed like an adventure — accessible, yet enigmatic.

Stories of stray Indian gaurs, elephants and even tigers had wafted through at mealtimes. So our eyes constantly tried to pierce the opaque green beyond the fresh, light palette of the tea bushes.

Coonoor in Tamil Nadu is a misty hill station surrounded by the lush green Nilgiri hills, interspersed with tea plantations, ravines, valleys and waterfalls. Photo: Jalebiji/ Shutterstock The Malabar pied hornbill is commonly recognised by its yellow bill with a black base and an oversized yellow and black casque on the top of it. The casque amplifies the nasal sounds the bird makes and also acts as an indicator of sexual maturity. Photo: Rajan Hatiskar / CC BY-SA 4.0

One morning, as we sat with fingers wrapped around steaming tea mugs, we suddenly started observing little nuances in the dense trees outside. A meticulously built nest, lianas coiled like snakes on trees and a marvellous curve that borrowed from a much brighter palette — yellow!

One of the most frustrating things about birdwatching for an untrained eye is to keep singular focus and not lose your target in the vast canopy. Pointing a find to someone else is even more challenging. It must have been a particularly serendipitous moment, that both my friend and I sighed at the same time and marvelled at the yellow curve and the strong shoulders of a bird sitting on the high canopy. Too awe-struck to speak, we remained quiet for the next few minutes, soaking in the sighting. I finally broke the silence with a coarse whisper, “What a wingspan, isn’t it?”. Confused, my friend looked at me. “Umm, it’s small!’. It took us a few seconds to figure that we had been looking at two completely different birds — a Malabar pied hornbill and a Nilgiri blue robin. She was referring to the blue robin’s bright curvaceous belly and I had been struck by the curve of the hornbill’s beak. The birds had been sitting close by and we both thought we were looking at the same one.

(Right) Great hornbills are territorial birds and live in the same region all their lives. They also form monogamous pairs, and mate for life. Photo: teekayu/ Shutterstock

Breakfast was a chatty affair that morning. Our hosts told us that it was indeed amazing that we had managed to sight both the robin and the hornbill. The Nilgiri blue robin is an endangered bird, endemic to the higher reaches of the shola forests and is known as the Nilgiri shortwing or white-bellied shortwing. The hornbills, on the other hand, are not that uncommon in the Western Ghats. But what a sight they are!

The gigantic birds are glamorous, massive and do great service to the eco-system by dispersing seeds in their large beaks. The Malabar pied hornbill, also known as the lesser pied hornbill, can grow up to 26 inches in size. Its black plumage is made patchy by a white belly, throat, tail sides and the trail of the wings. It’s the protruding large bill and the casque, along with the size that makes it stand out. The omnivorous birds have a rich diet of fruits, small mammals, birds, reptiles and insects that they can overcome with their size.

The Narcondam hornbill is endemic to the Andamans, but a shrinking habitat is threatening its survival. Less than 249 survive in the wild. Photo: Dhritiman Mukherjee

The great hornbills have a black face, back and underbody, with two white bars on their black wings and a broad back tail band. The most striking feature is the huge black and yellow beak with an enormous concave-topped casque. The stunning birds are often hunted down for their beaks and feathers, that adorn head gears of the tribals in the Northeast, especially Arunachal Pradesh. Namdapha National Park and Pakke Tiger Reserve and Sanctuary in Arunachal Pradesh are your best bet to spot some from a rapidly-decreasing population. In an effort to conserve the last of the birds, the government of Arunachal Pradesh declared the Pakke Paga Hornbill Festival (PPHF), the state’s only conservation festival, as a ‘state festival’ this January. Another festival that borrows the name of the bird is the Hornbill Festival in the adjoining state of Nagaland. Addicted to hornbills from the fateful morning in Coonoor, I was certain that my chance to visit the Hornbill Festival would result in another memorable encounter. But I was left disappointed. The rapid hunting of the birds over decades ensured that I couldn’t spot even one.

It was a trip to Jim Corbett National Park in the following years that made me relive the heart-stopping hornbill moment again. Bumbling down a muddy trail in Bijrani zone, our jeep was ordered to come to a sudden halt by the guide. We followed his finger to the top of a large copse of sal trees. Two of us in the jeep gasped. There it was.

The large arch of a yellow beak. Characteristic shoulders and then whoop, a flight with massive black wings with white ends. After taking in the momentary production by a great hornbill, I looked around to see if there was any other bird that had instigated the other gasp. This time, both were reserved for this magnificent creature. 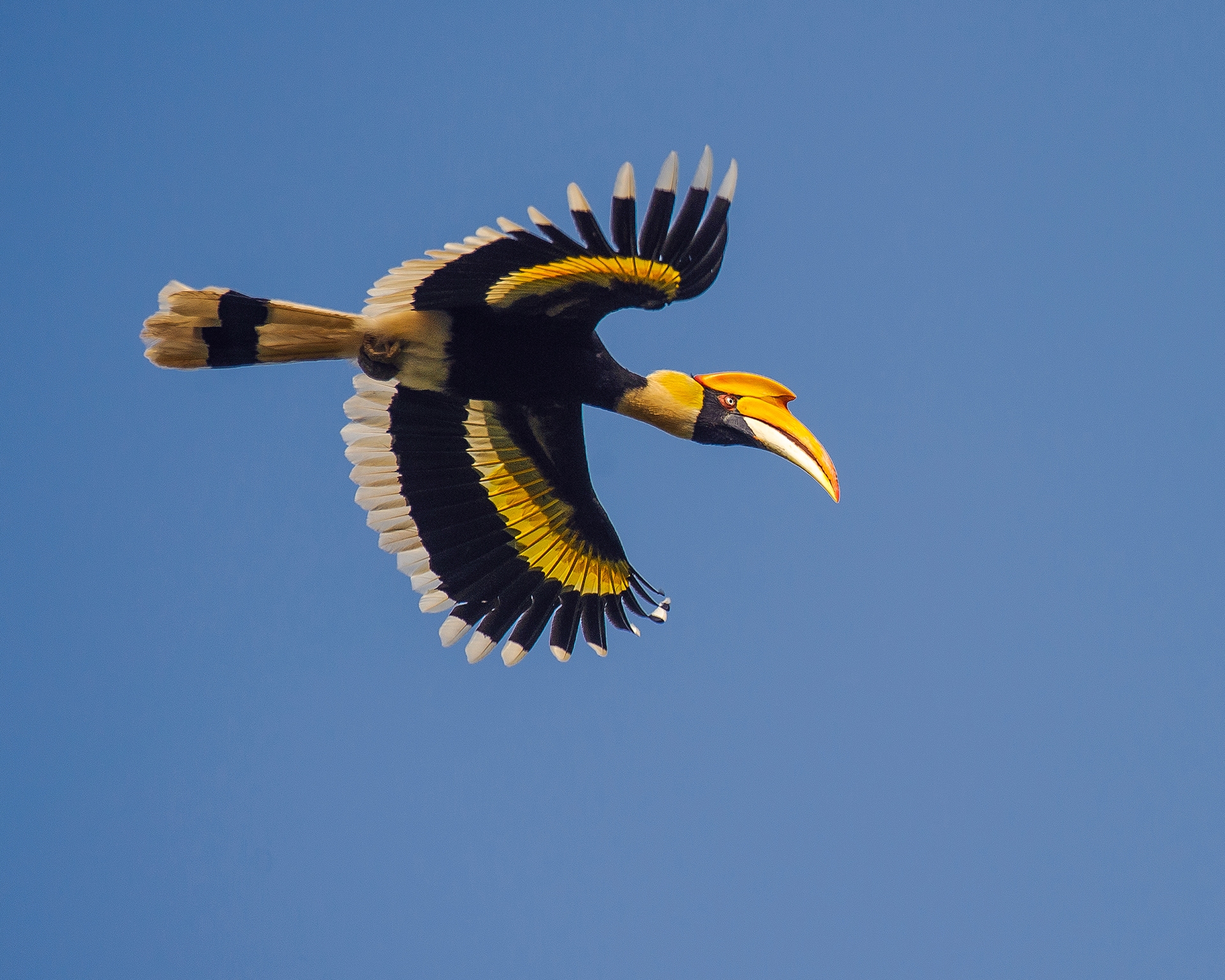 The great hornbill has a spectacular 5-foot wingspan, and often lands with a heavy ‘whoosh’ on tree branches, earning it its local name Malamuzhakki Vezhambal in Kerala, meaning mountain echo. Photo: Udayan Borthakur 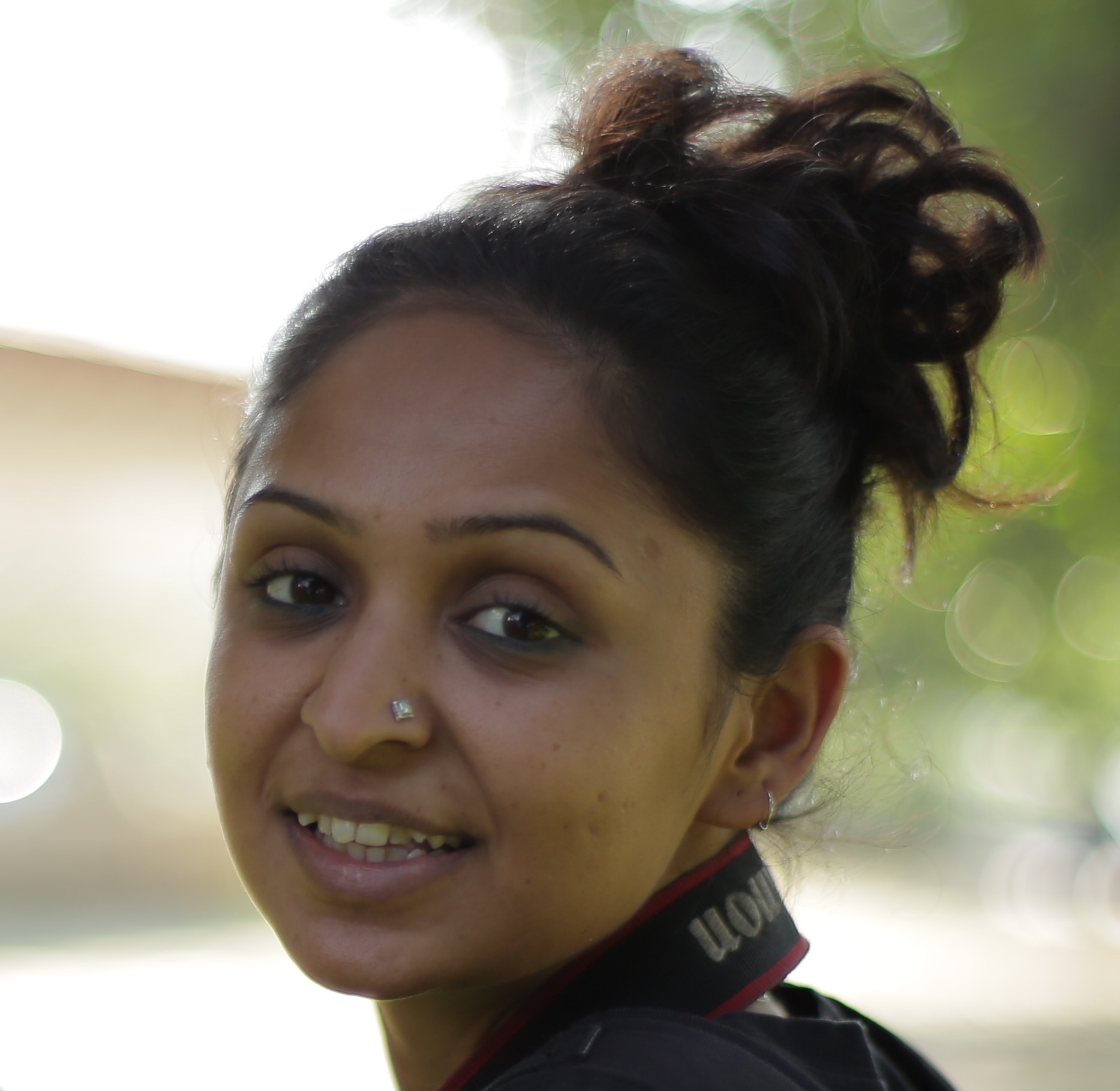 is a Mumbai based freelancer writer and travel content consultant who loves veering off to lesser known places in India. See her work on www.supriyasehgal.com