Deep in the forests of the northern Western Ghats, Castle Rock is a hotspot for reptiles and amphibians, and the perfect location to find and study this elusive nocturnal pit viper

Text and Photos by: Nirmal Kulkarni 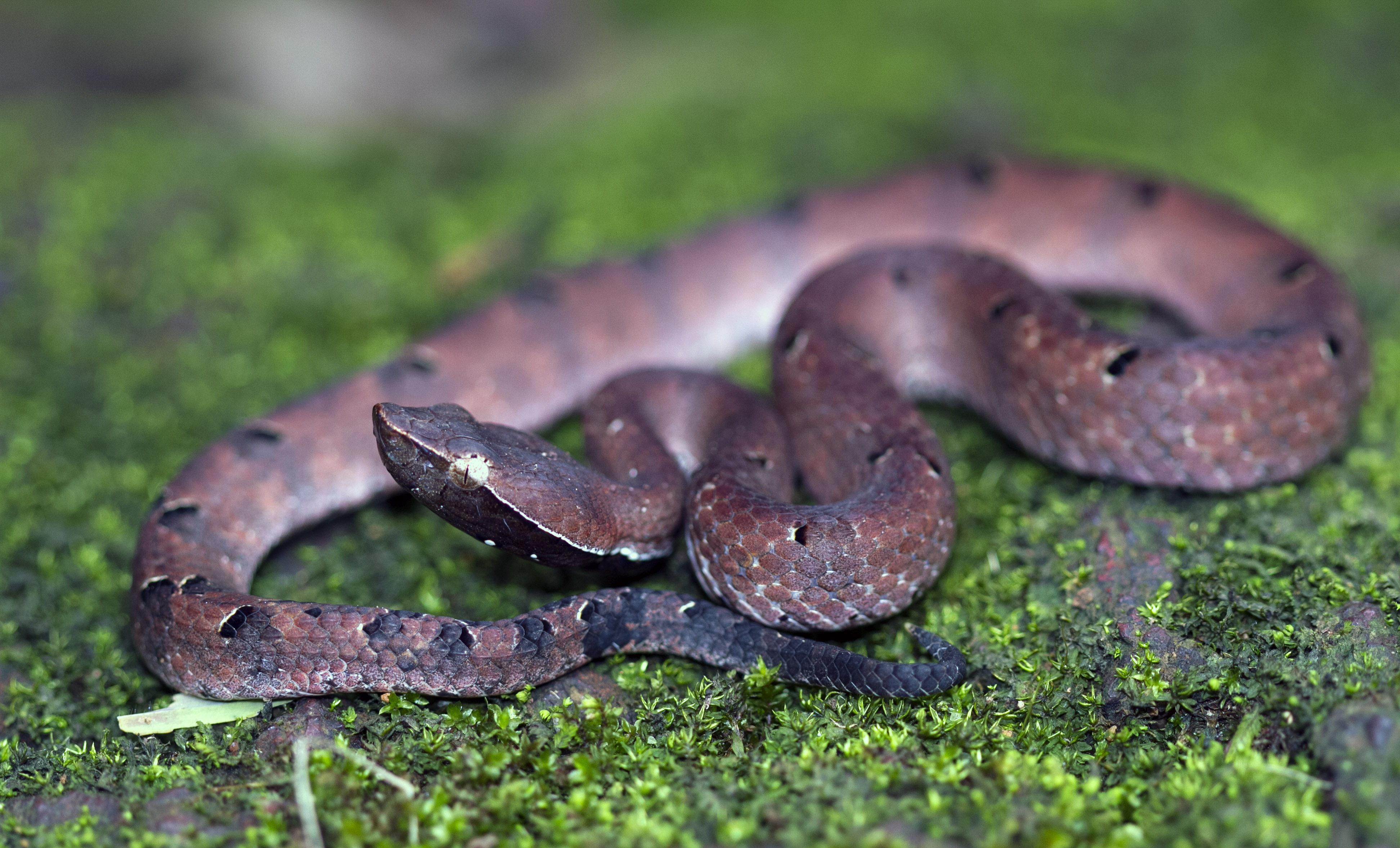 Deep in the evergreen forests of Castle Rock in Karnataka, a vibrating alarm goes off somewhere in my rucksack. I ignore it. For now, I am on foot, in quest of a spectacular reptile that has eluded my team in this part of the Western Ghats, a hotspot for reptiles and amphibians. I am a snake man and conservation photographer and these forests are my home.

Dawn stirs the forest floor as light filters through a 70 per cent canopy cover and an assembly of dark clouds. I walk through a lifting screen of mist which makes me feel like the flowing Dudhsagar River is breathing to a rhythm. It is mid-August and the southwest monsoon still rules the heart of India’s northern Western Ghats. A rich, wet, down-to-earth scent fills us — me, a snake hook brandishing forest soul and Anant, my right-hand man and son of these forests. Our rain-soaked bodies, loosely tied leech socks, and watertight backpacks make for a peculiar sight and I wonder if the langur letting out an alarm call thinks the same. Mosquitoes of varied sizes keep us on our toes, and our ears peeled even as our minds are occupied with thoughts of stumbling into a wet, wild sloth bear.

The Dudhsagar River flows through the densely vegetated Kali Tiger Reserve in Karnataka, sustaining wildlife along the way.

We chose to go off trail at a bend near the cascading river that has given us company for so long, and head to a higher altitude. The subject of my study during this foray into the wild is usually found between 70-900 metres above sea level. I reach a position where my GPS barely picks up a signal and I read aloud “360 m”. Yes, we are in the perfect setting. There is good canopy cover, with over 80 per cent humidity and temperatures between 20 degrees to 22 degrees Celsius, which is typical of these tropical forests. Chocolaty flowing waters, near a forest floor of soil enriched with leaf matter and silt, give me hope. I say a silent prayer to the rain gods and look up at Anant who’s eagerly unpacking and getting prepared for work.

I take my 20-kilo rucksack off and place it near a rock that has civet pellets on it, making a mental note that it could well be scat of the elusive and endemic brown civet. As I reach for the bottle of water in my side compartment, a diminutive coiled mass of subtle beauty catches my eye. It is just ten feet away from where my feet have sunk into the soft biomass of leaf litter and decaying fruit.

My attention is on its off-white tail and chocolate-brown body. I have an unfathomable love for pit vipers and today is my day in the rain. Within minutes of stopping I have sighted the first individual — the unmistakable hump-nosed pit viper (Hypnale hypnale). It is a stunning snake and words fail me. This pit viper’s type locality is right here in Castle Rock. A type locality refers to an area from which the perfect specimen representative of a species can be found and used as a reference. I stand watching it uncoil and flick its tongue as it senses our presence. I exclaim loudly in great joy and excitement. 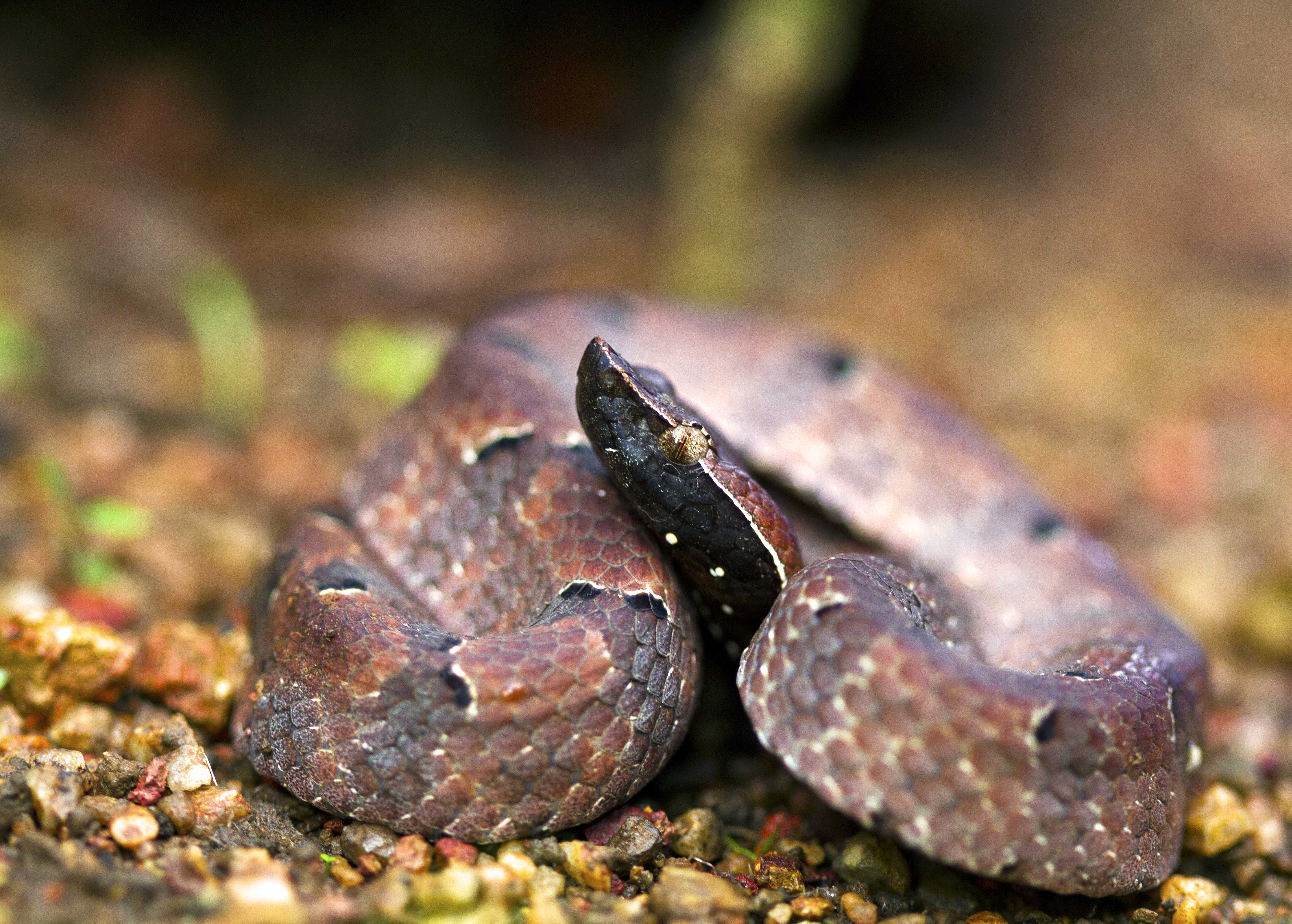 Hump-nosed pit vipers are largely nocturnal. They spend most of the day hiding, either curled up in leaf litter or logs, or under rocks. Their brown colour with black spots allows for near-perfect camouflage.

While Anant begins his task of marking coordinates on a GPS and holding a larger-than-life bottle green umbrella over me, I dig my kneecaps into the brown-black earth to take pictures. I peer through my camera viewfinder to observe the pale orange-brown colour so characteristic of the species in this area. I have always marvelled at the individual markings of this species which grows up to 18 inches in this region. The snake is sprinkled with dark brown markings and an even darker shade of indistinct triangular blotches. Its head is brown on top and almost black below, with a pale white line running down from the top. The underside is grey-brown, and a pale white line separates the top of the head, which is brown above and almost blackish brown below.

Nocturnal and ground dwelling by nature, the hump-nosed pit viper has been sighted on small cane and bush vegetation, besides being found in leaf litter and near waterbodies perched on rotting logs. Its preferred prey includes geckos, frogs, skinks, and smaller rodents all of which are plentiful on the forest floor. Masters of camouflage, these pit vipers lie in coils and are sometimes even known to lure their prey with the help of a whitish tail tip that they vibrate to mimic a worm and attract geckos and skinks. Once within striking distance, they attack swiftly, and the poor skink is subdued and eaten at leisure.

The hump-nosed pit viper is a venomous snake, with heat sensitive pits that detect temperature changes and help it locate prey. Recent studies by various toxicologists and researchers indicate that the venom it produces can cause fatalities in humans. It has already been added to the list of medically important snakes by the WHO. Bites inflicted are known to cause fever, swelling, and pain; a few reports of renal failure and death also exist. An ongoing study by medical professionals and senior research associates seeks to develop a protocol for treatment. 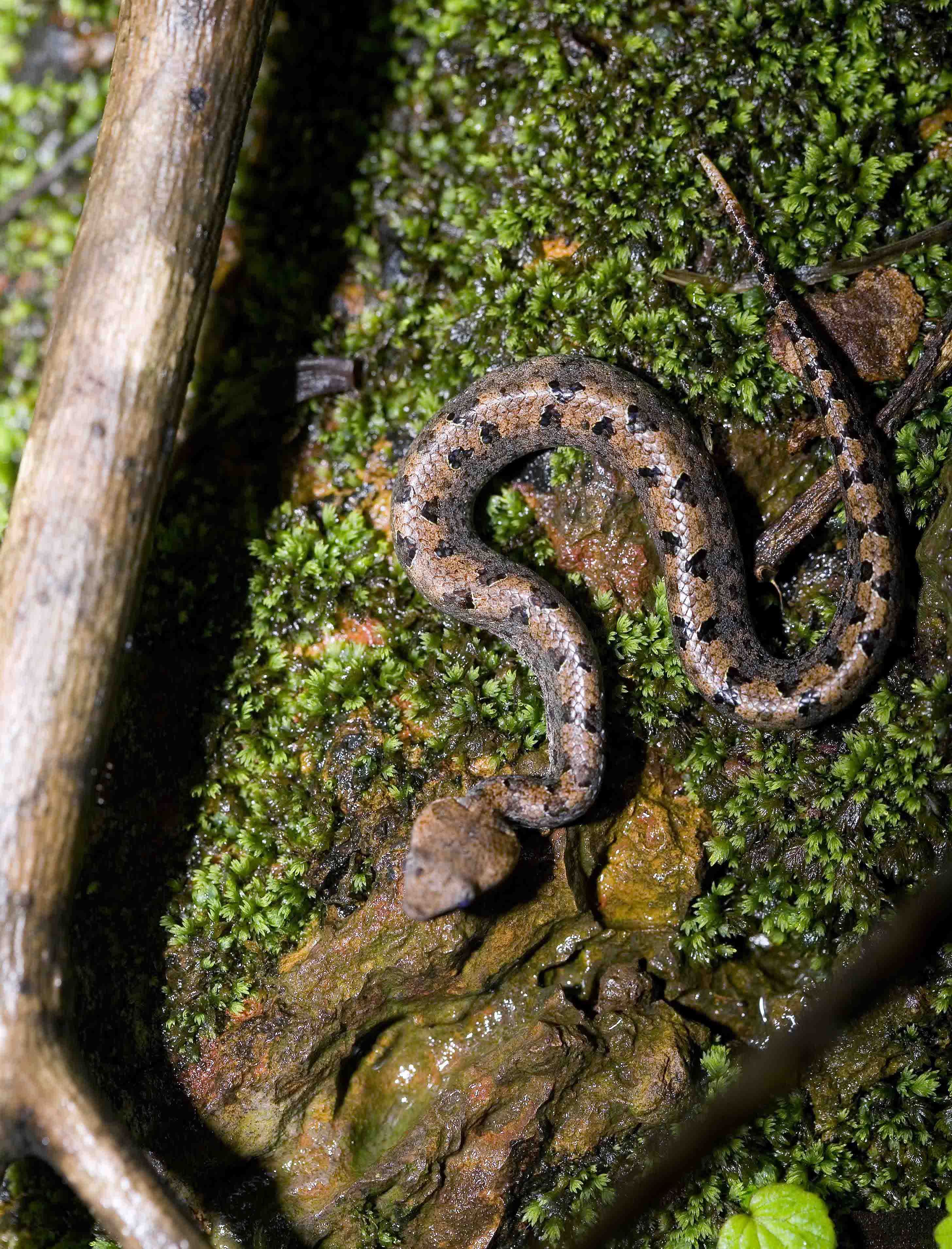 A juvenile hump-nosed pit viper on the forest floor. Since they are easily camouflaged, largely terrestrial, and hard to spot, they are often stepped on, or disturbed resulting, on some occasions, in a defensive bite.

After a while, with our rainwear in place, backpacks strapped on, and a dozen leeches in tow, we make our way to the next location. With more fieldwork to do before noon, we move ahead with the hope that we can unravel more reptilian secrets. We hope to locate more individuals of this charismatic species at lower altitudes and compare colour variations, size, and vegetation preferences, among other parameters.

There is a rumbling in our stomachs as well as the skies. The task looks daunting, but the results are always thrilling. My grip on the snake hook firms up. Our search carries on.

is a snake man and story teller- in tune with creatures big and small. He lives in Goa and considers the Western Ghats of India his home.