When a rare, land-dwelling tortoise materialises out of nowhere in a small area of the Northeast, there is cause for celebration and conservation

Text by: Anuja Mital, with inputs from Lishi Gunia 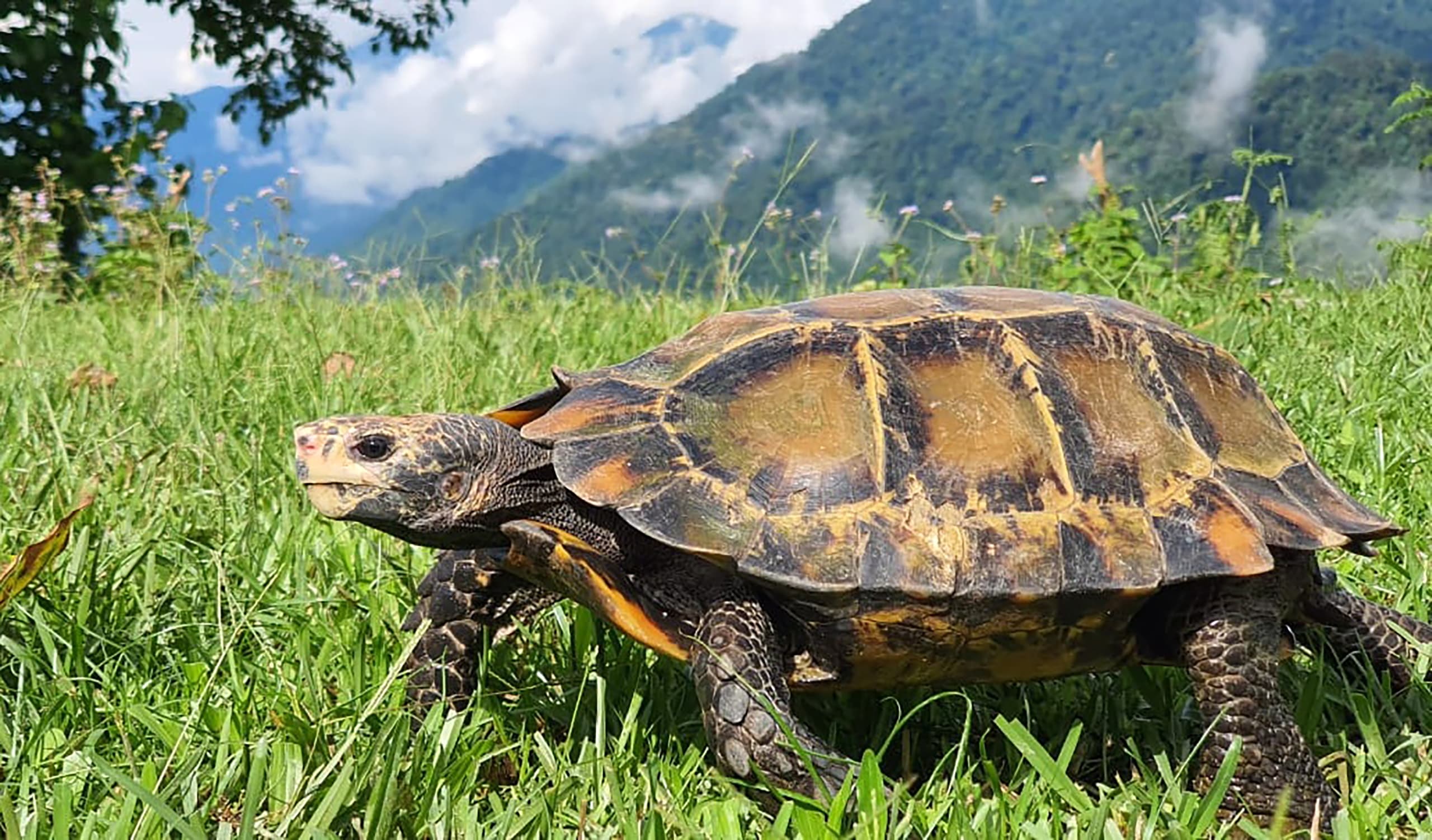 The gentle plains of Assam were behind me as I made my way to Yazali village in a tightly packed shared Sumo vehicle, along the pothole-ridden road from Itanagar to Ziro. The undulating, green-carpeted mountains of Arunachal Pradesh towered ahead of me. It was June 2019, and the Range Forest Officer of Raga, Mr Bunty Tao had rescued two large, bright-orange and brown coloured tortoises. I was on my way to Yazali with unabated excitement to get a glimpse of this beautiful species and to assist with confirming this record with scientific rigour. On examining the tortoise, the unmistakable spurs on their hind limbs and concave dents or “impressions” on the shells confirmed them to indeed be the impressed tortoise (Manouria impressa). This species, hitherto unknown in India, could now be added to India’s chelonian checklist.

Arunachal is known to be brimming with a great diversity of smaller taxa like butterflies, moths, amphibians, lizards, snakes along its ridges, rivulets, ravines and in dense impenetrable forests, all waiting to be discovered. It was a momentous feeling when such a large land-dwelling tortoise, growing up to 31 cm, was revealed to us in 2019; it is also a testament to the species richness of the region. Northeast India has the highest species diversity across India, from bamboos to butterflies, pheasants to primates, turtles and tortoises. Arunachal Pradesh lies within the Indo-Burma and Himalayan biodiversity hotspot, which also happens to be a “Turtle Priority Area”.

The rugged, pristine forested mountains of Lower Subansiri, Arunachal Pradesh remain a vast realm of hidden biodiversity, yet to be discovered. Photo: Bitupan Boruah Cover photo: A male impressed tortoise strolls in the mountainous grasslands near Potin village. Males are distinguished by black pigmentation on their heads and necks and are smaller than females. Photo: Lishi Gunia.

Manouria impressa, the impressed tortoise, is classified as a “Vulnerable” species by IUCN, is rare in the wild and sparsely distributed across Southeast Asia. Were these tortoises indeed indigenous to Arunachal or smuggled through an illegal wildlife trading route from Myanmar? If indigenous, how had this relict population come to be in Arunachal, a whopping 245 km away from the nearest known population in Hukaung Valley Wildlife Sanctuary, Myanmar, that too with the mighty Brahmaputra River flowing in between? Interestingly, its sister species, the Asian giant tortoise (Manouria emys) is found in Northeast India only south of the Brahmaputra, which acts as a geographical barrier for such large land tortoises.

Northeast India has the highest species diversity across India, from bamboos to butterflies, pheasants to primates, turtles and tortoises.

I spent the next few days exploring the forests around Yazali. The evergreen forests with closed canopies were reported to be the perfect habitat for tortoises. The pitch-black soil contrasted with the innumerable shades of green foliage and brown leaf litter covering extensive tangles of roots. The bamboo thickets swayed and creaked with the gentle winds. Cicadas on the culms were the only signalling sirens that pierced the still landscape. One could sense elusive small reptiles and birds all around though they preferred to stay hidden, attuned to disappear into the thickets, on hearing the brush of footsteps on the forest floor.

I also informally interviewed locals from the Nyishi tribe who frequent the forests of Yazali and Potin villages. The Nyishis are the most populous tribe in Arunachal and are known for their legacy of hunting. Most follow practices of animism or the religion known as Donyi-Polo, meaning Sun-Moon. A chance encounter with a local wildlife enthusiast Lishi Gunia finally provided me with a breakthrough.

(Left) The female impressed tortoise [on the left] and male [on the right] discovered in June 2019, are most likely interacting during a mating attempt in the monsoon when they are found to be most active. (Right) Ripened figs growing along the forest floor are an important food source for the frugivorous impressed tortoise according to the Nysihi community. Photos: Anuja Mital (left), Lishi Gunia (right)

Tales of the chimin rakap

On showing Gunia photos of the tortoises, he exclaimed that he knew of people in his village who had been consuming similar tortoises known as chimin rakap in the Nyishi language. He directed me towards several houses where people reminisced about their associations with the tortoises. It was confirmed — they belonged to Arunachal after all. The Nyishi have known about the impressed tortoises’ presence for decades and had several interesting folk stories about them. Gunia’s mother recalled having eaten a tortoise decades ago that was found eating mushrooms growing out of termite mounds, and that it was a delicacy that tasted better than chicken.

Locals reported that tortoises frequent wild banana patches that intersperse forested hillslopes to eat the fallen ripened bananas or under Ficus trees when figs ripen. Locals encountered them while clearing bamboo patches or while taking mithuns (Bos frontalis, large local bovine) to graze in the forest.

Manouria tortoises are mostly herbivores and frugivores. Their role as seed dispersers in these forests awaits exploration. 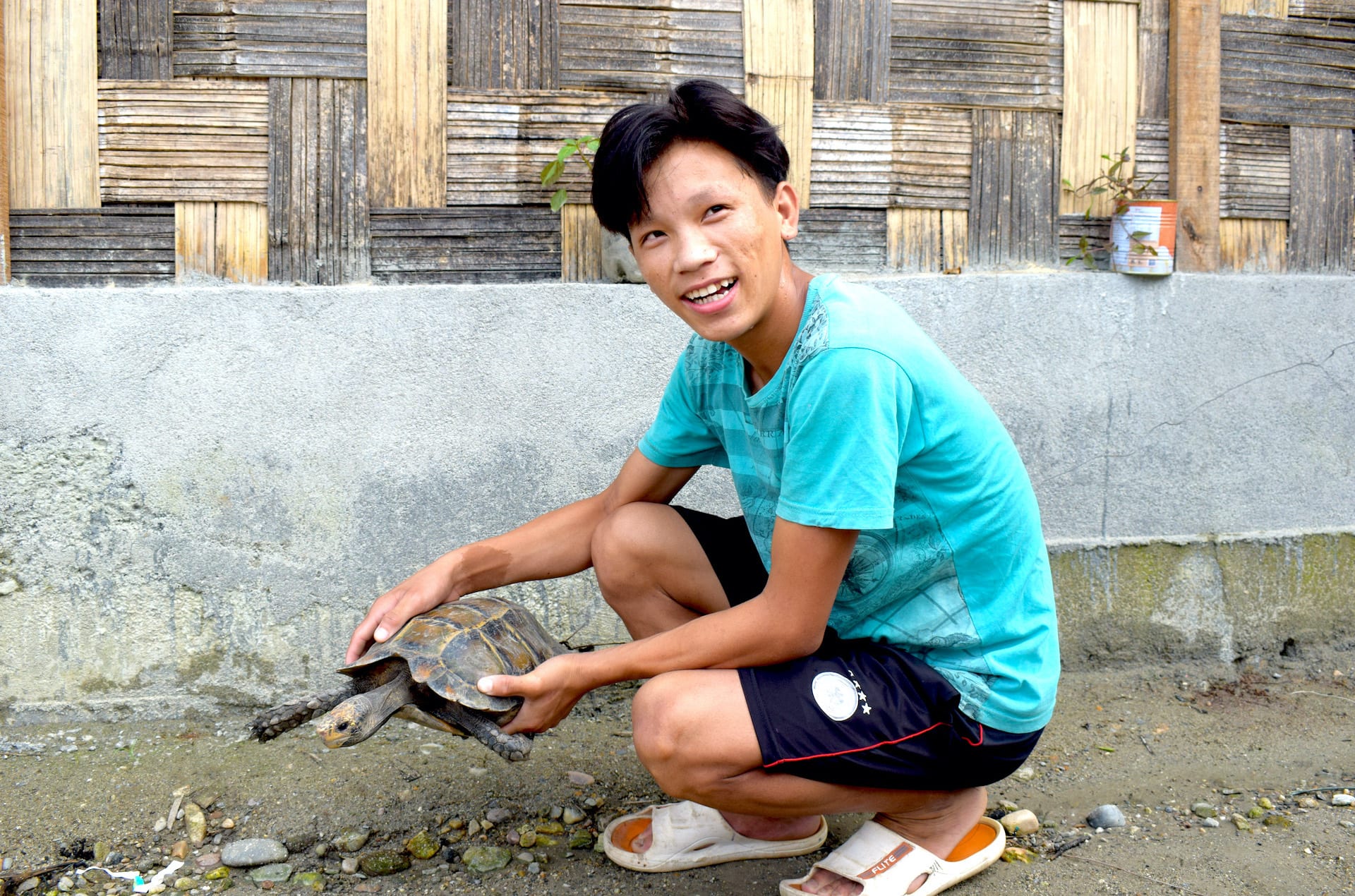 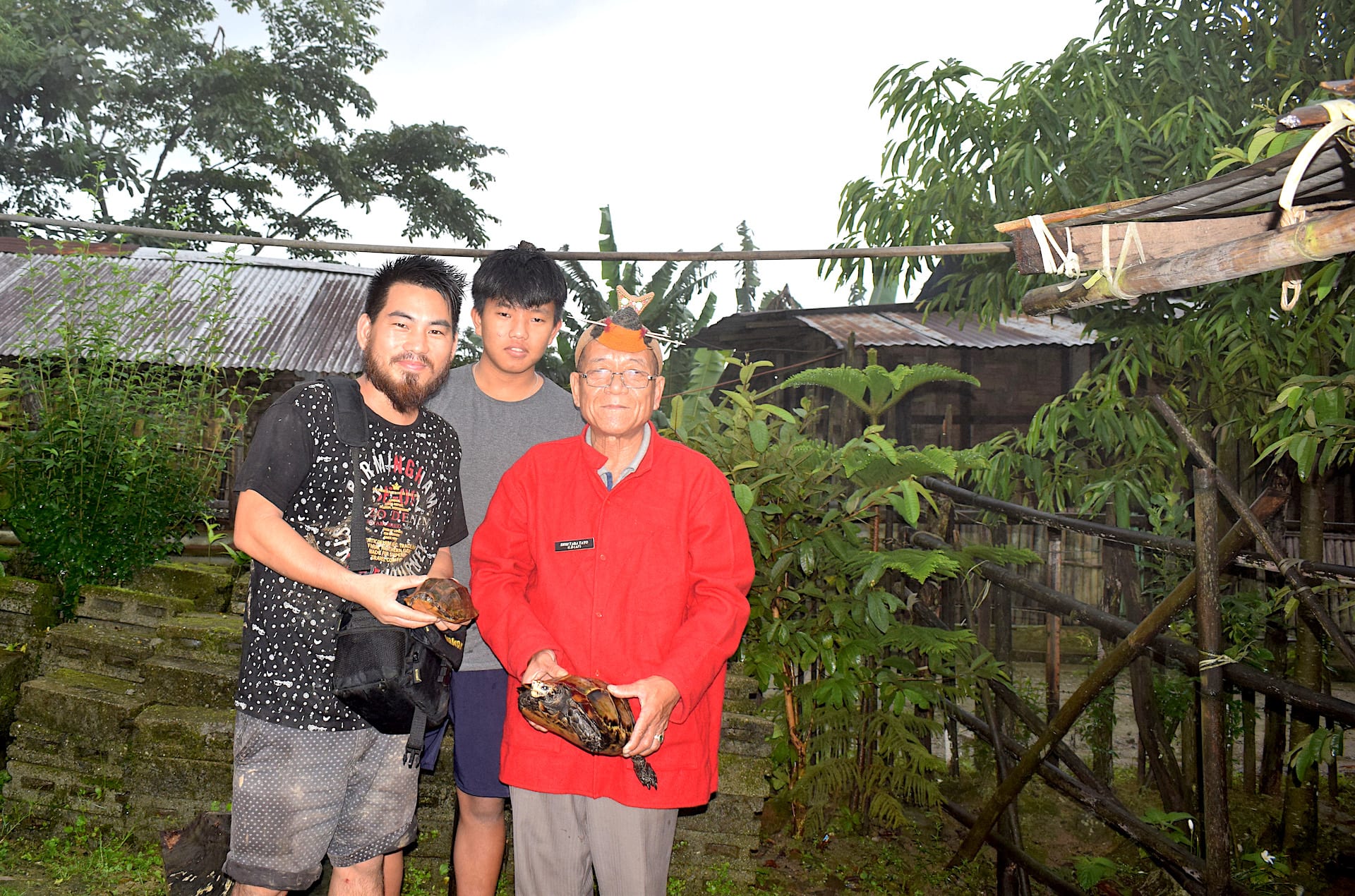 (Left) Bamang Tachung with the impressed tortoise he found and released back into the forests near his home. His refusal to kill or sell the tortoise off was a step forward to changing people’s minds in his village. (Right) The village elder leader (gaon bura) has been instrumental in spreading the message of conserving impressed tortoises by releasing one back into the wild. Photos: Lishi Gunia

The gaon bura (village elder) of Potin Village, Shri Taba Tayo, recounted another tale from decades ago, when he and his friends were passing by a swampy rivulet, looking out for their mithun. Under the clear water, they saw a large, coloured stone covered in algae. However, one of his friends exclaimed that it was not a stone but a big tortoise. It took three people to lift the massive tortoise and they consumed it as a gift from Mother Nature. The impressed tortoise is long-lived and reaches sexual maturity at later ages. It is therefore vulnerable to pressures of local subsistence consumption. Apart from being a good source of meat, turtle shells are sometimes hung from house entrances to ward off evil spirits. The species’ habitat is also threatened with logging due to shifting agriculture and large cardamom (Zingiberaceae) plantations. Dam and road-building controversies plague these hilly regions, made worse with mining slowly eating into the hills.

Once news of these tortoises spread, pride for this unique species has started building. Sporadic records of people spotting them have been coming in. In most cases, they are letting the tortoises live instead of consuming them. Efforts are being made to foster deep connections with nature which bodes well for the conservation of this species. In June 2020, exactly a year after the initial discovery, we received news that an adult impressed tortoise was found by a local teenager called Bamang. He had spotted it in the pristine forests near the remote village of Bumchi Bumte.  The tortoise was mucking around in a small swampy lake, locally called “nyodi sinyi midiir”. 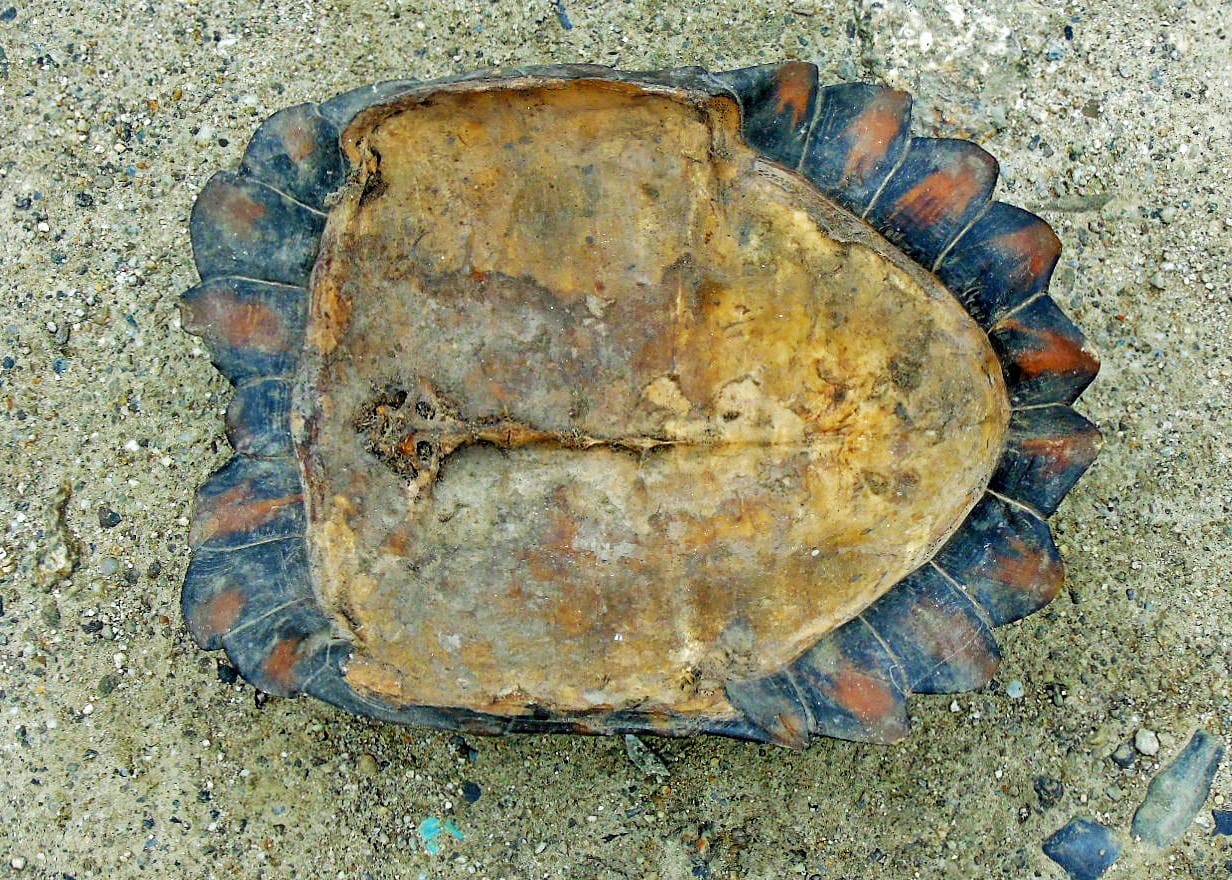 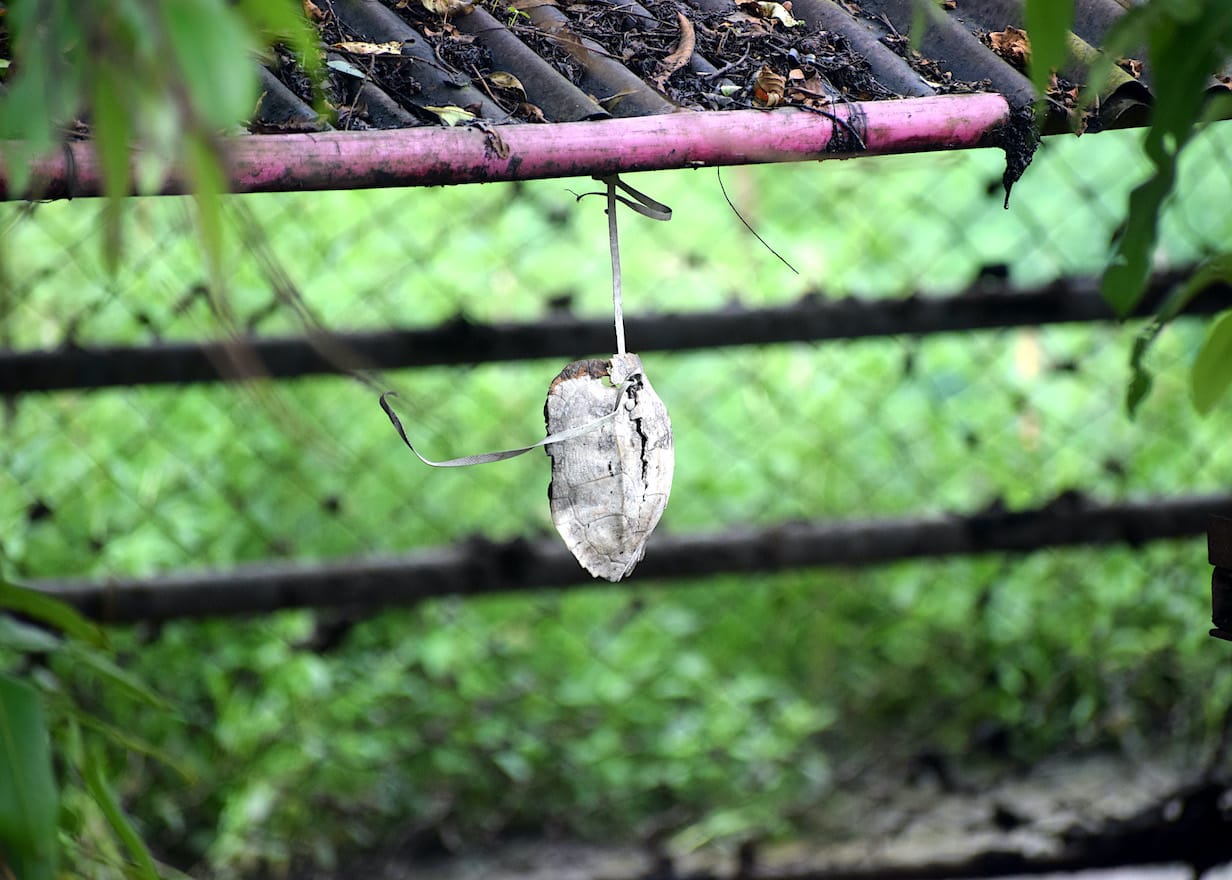 (Left) The upper portion of an impressed tortoise’s shell, cleanly cut using a “dao” knife, was found discarded near a local home in Yazali village. (Right) A keeled box turtle shell hangs at the entrance to a house. It is believed to ward off evil spirits. Such superstitions are commonly prevalent in many regions across India. Photos: Anuja Mital (left), Lishi Gunia (right)

While collating these records we found that Dr Anwaruddin Choudhury, an eminent naturalist in Northeast India had documented the shell of a consumed tortoise in 2012 from Cher village as well. From being unknown to mainland India to more than 10 records of live tortoises and shell specimens since 2019, raises the question: Is this species as rare as we think? The five live tortoise records come from only a ~24.5 sq km area across Papum Pare and Lower Subansiri districts. The undisturbed forests of these regions remain a field of hope for conserving a species hidden and sheltered in these forests. 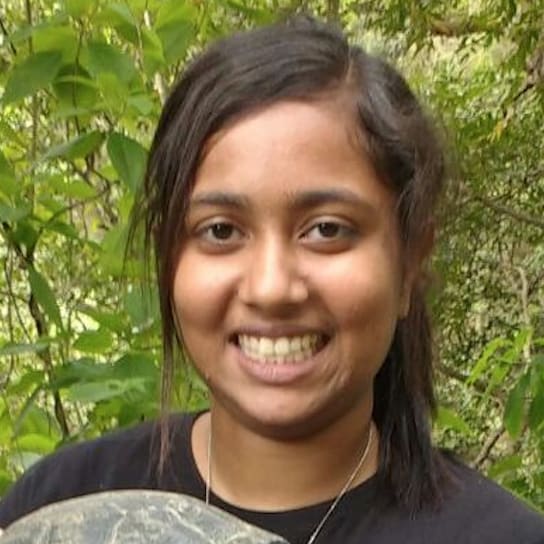 is a herpetologist working on freshwater turtle ecology in the Brahmaputra River system. She is also the co-founder of Freshwater Turtles and Tortoises of India (FTTI), a citizen science initiative.