Indian Chameleon and the Art of Disappearing 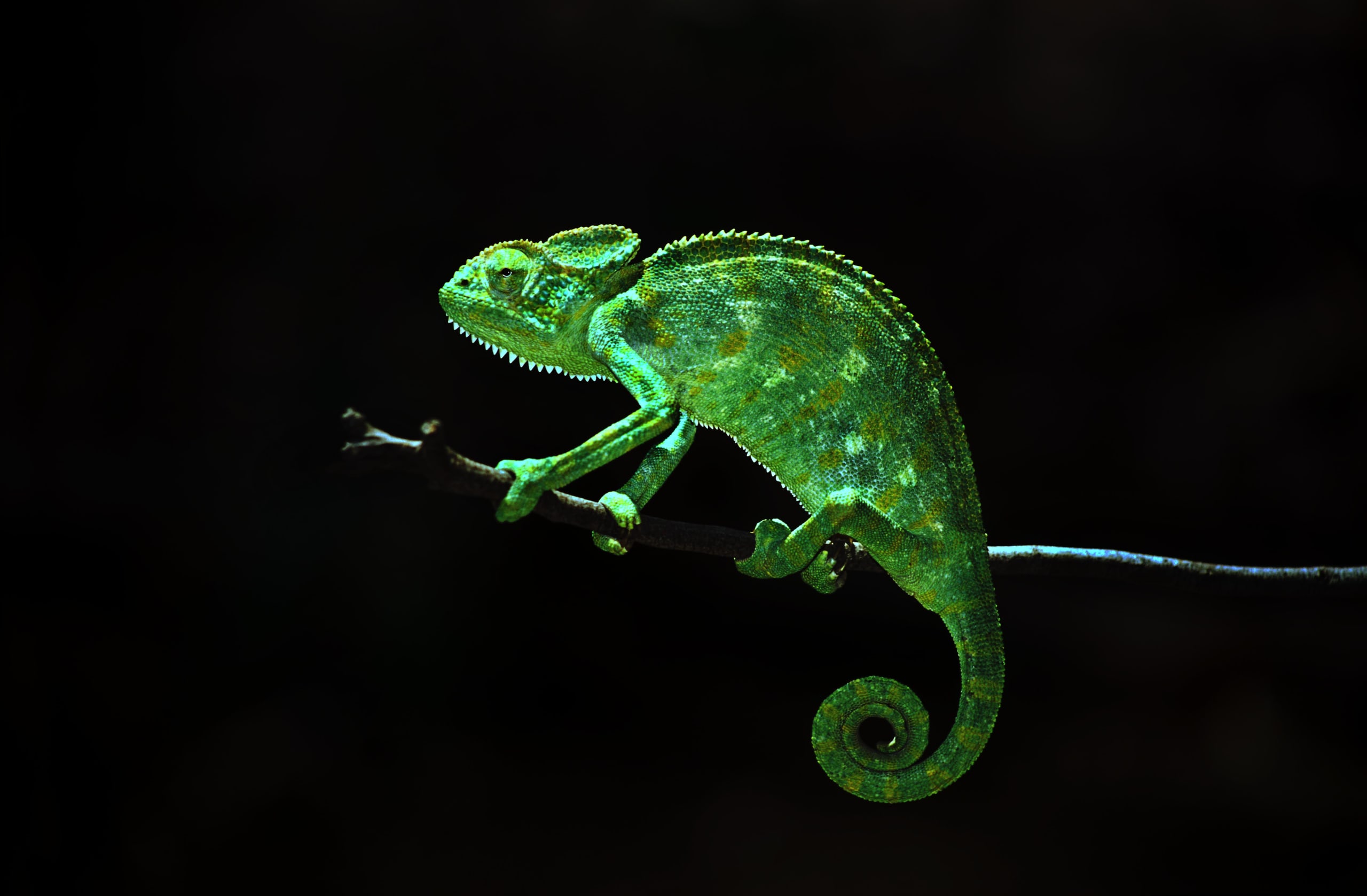 Most of mainland India’s dry, thorny scrub forests are home to an animal that takes stealth to an unparalleled level. It can be right in front of you and yet completely merge into the surrounding foliage. Its form, movement, colour, and behaviour, all enable it to stay beneath our radar.

The Asian chameleon (Chameleo zeylanicus), aka Indian chameleon, is a wonder of evolution possessing numerous facets that are quite different from other lizards. Watching a chameleon over a couple of hours will reveal how it uses almost all its wondrous adaptations. However, watching a chameleon for any length of time can be difficult. You could have your gaze locked on it one minute and then completely lose it in the next. Chameleons rely so much on camouflage that everything they do, especially when troubled, is aimed at vanishing from sight.

The chameleon’s feet, limbs, and tail are built to make the most of an almost exclusive arboreal life. Long limbs with digits designed for gripping allow the chameleon to do its famous “dance”. To avoid being detected by predators, chameleons move slowly, rocking back and forth to mimic their background and seem more like part of the vegetation swaying in the wind.

Chameleons change colour to thermoregulate and interact with each other based on their mood. This chameleon photographed in Mangaon, Raigad, is displaying colours of stress and agitation. Photo: Shantanu Kuveskar, CC BY-SA 4.0
Cover: India has only one known species of chameleon, the Asian chameleon (Chameleo zeylanicus). Cover photo: Kedar Bhide

A chameleon’s “hands” and “feet” are an overlooked wonder of evolution. The digits are clubbed together in bunches of two and three oppositely in hands and feet. This cleft develops in the embryonic stage and the result is what is called “syndactyly” or the joining/webbing of digits. Chameleons have adapted what is a congenital defect in most species to maximise their efficiency on trees.

The inability to move quickly means these lizards need to be able to approach their quarry stealthily and capture it from a fair distance. We know chameleons can be stealthy. The “pounce” comes from their incredible catapult-like tongue. Armed with a very viscous saliva (about a thousand times more viscous than ours) at the tip of the tongue, chameleons use an accelerator muscle to shoot their tongue out up 1.5 times their body length, at an acceleration akin to a car going from 0 to 60 kmph in a fraction of a second. A retractor muscle pulls the tongue back into the mouth. Chameleons give a whole new meaning to the term “tongue lashing”!

The lightning fast tongue is also incredibly accurate. While waiting for prey or moving about, the chameleon can rotate its eyes independently, looking in different directions at the same time. It has, pretty much, a 360-degree view of its surroundings. However, when it’s about to grab its prey, it will focus both eyes forward, stretch out as much as it can toward the unsuspecting insect, and shoot its tongue out with uncanny precision. I’ve rarely seen a chameleon miss its target, even though its prey consists of insects like grasshoppers, butterflies and even dragonflies with really fast reaction times to any movement or threat. 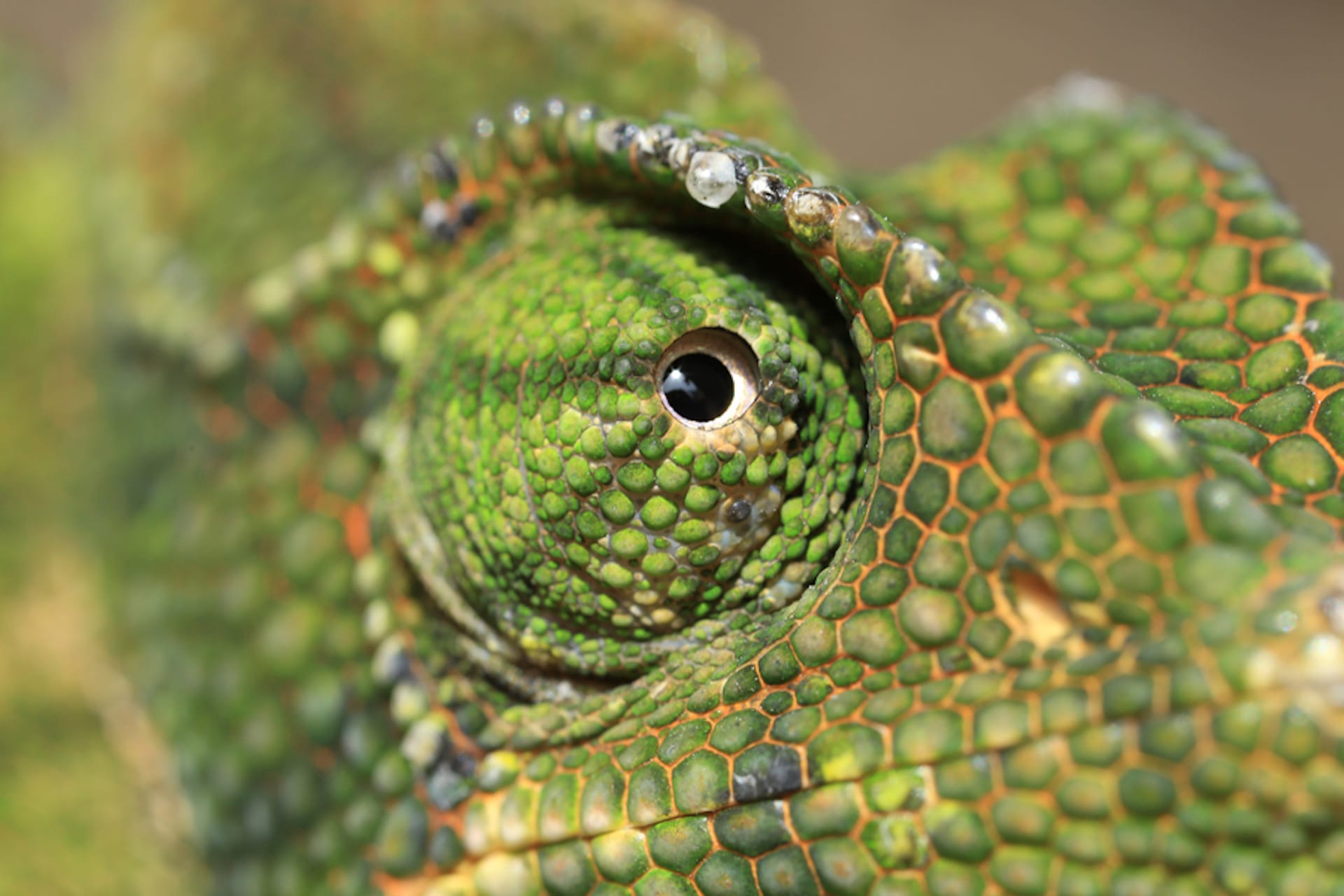 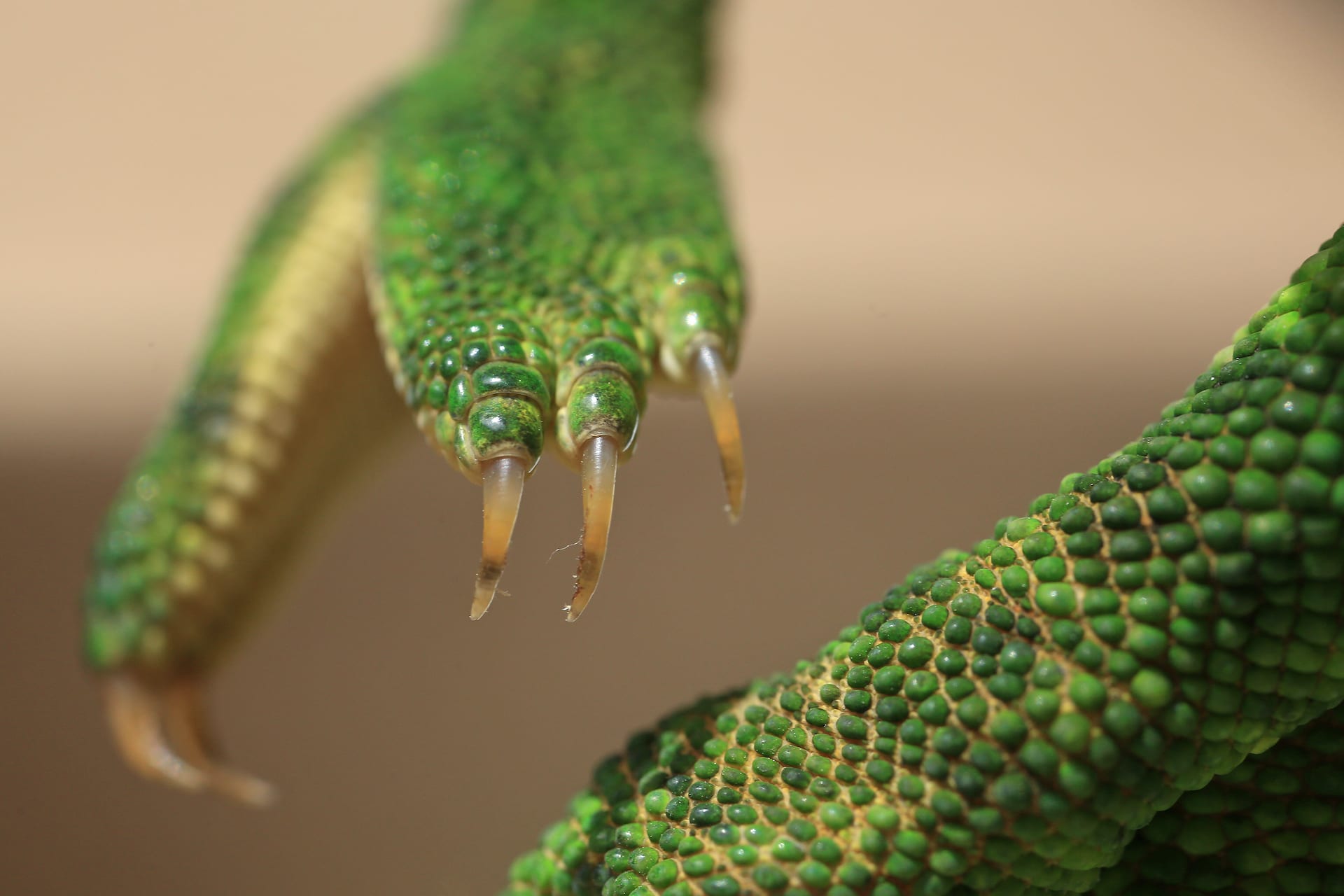 (Left) All chameleons can move their eyes independently to look in different directions. (Right) With feet adapted to gripping, chameleons are absolutely at home in their arboreal habitats. Photos: Raman Kulkarni

I saw my first wild chameleon crossing the road when I was walking home from the school bus stop. It walked with its tail held straight, pointing obliquely upward, and displayed the typical swaying motion as if it couldn’t decide whether to move forward or not. Aged 12, I was too reticent to pick it up or touch it but waited patiently with it as it crossed the road, climbed into a hedge, and vanished. I’ve never forgotten that sight. I scoured the hedge every day for months after to see a chameleon again, with no luck. Shortly after that I got my first rechargeable torch and spent many a night looking for, well, anything! I started spotting chameleons roosting in the hedge of our farm quite regularly. All their camouflage was useless with an external light source in the dark. However, seeing so many chameleons around suddenly made me wonder at their ability to stay below the radar.

Chameleons don’t come down to ground level often; they do so only when they need to cross from one clump of trees or shrubs to another or when females need to lay eggs. When gravid, a female chameleon will stop feeding for about a week or two until she is ready to lay her eggs. When it’s time to lay her eggs, she will descend to the ground and scout for a place to dig (usually near the base of a tree or rock). Using her fore and hind limbs alternately, she will dig a tunnel long enough for her to enter completely and turn around before she lays her eggs. She exits and closes the tunnel by pushing back excavated soil. She then needs to build up her strength and fat reserves again and will focus on feeding as much as possible. 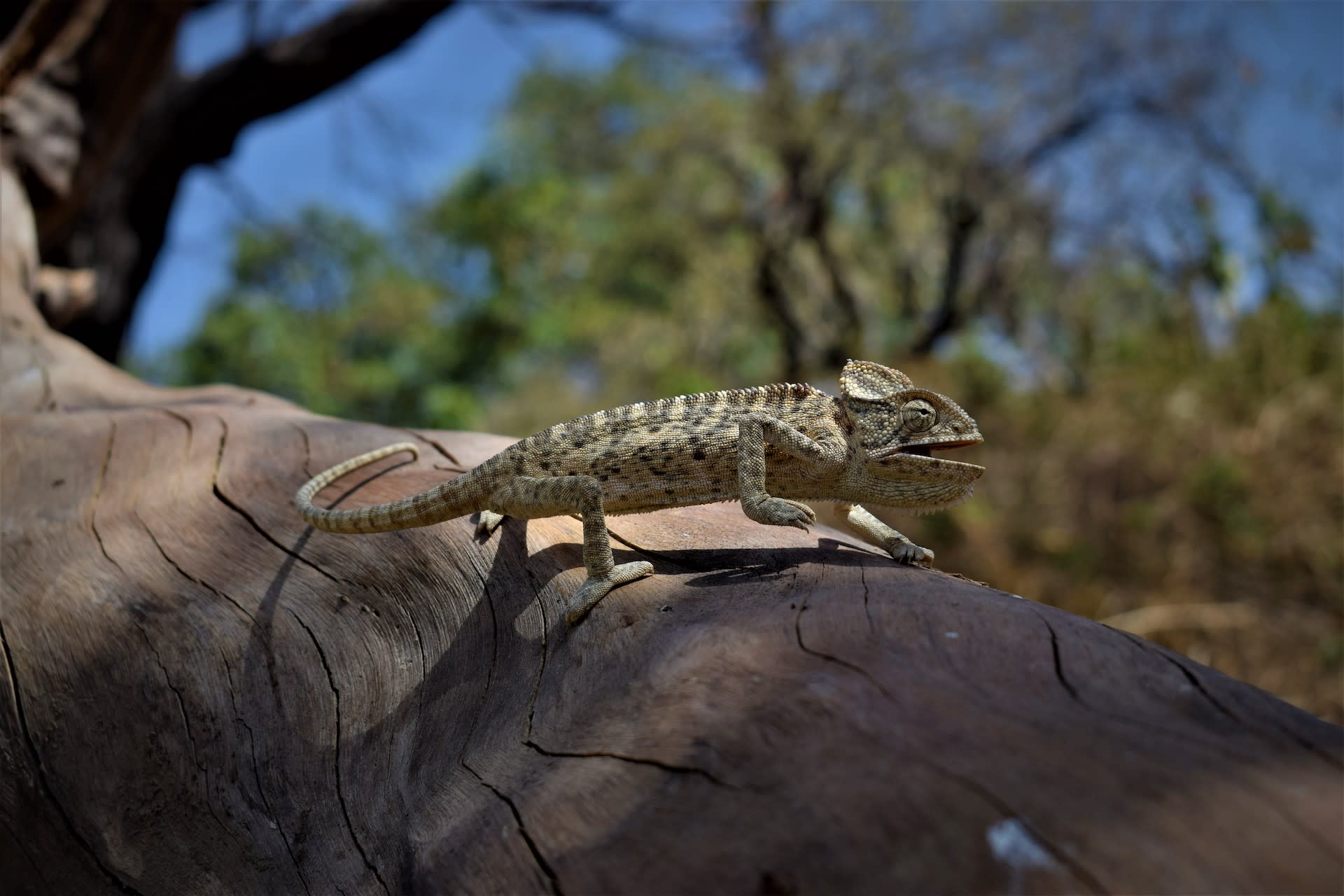 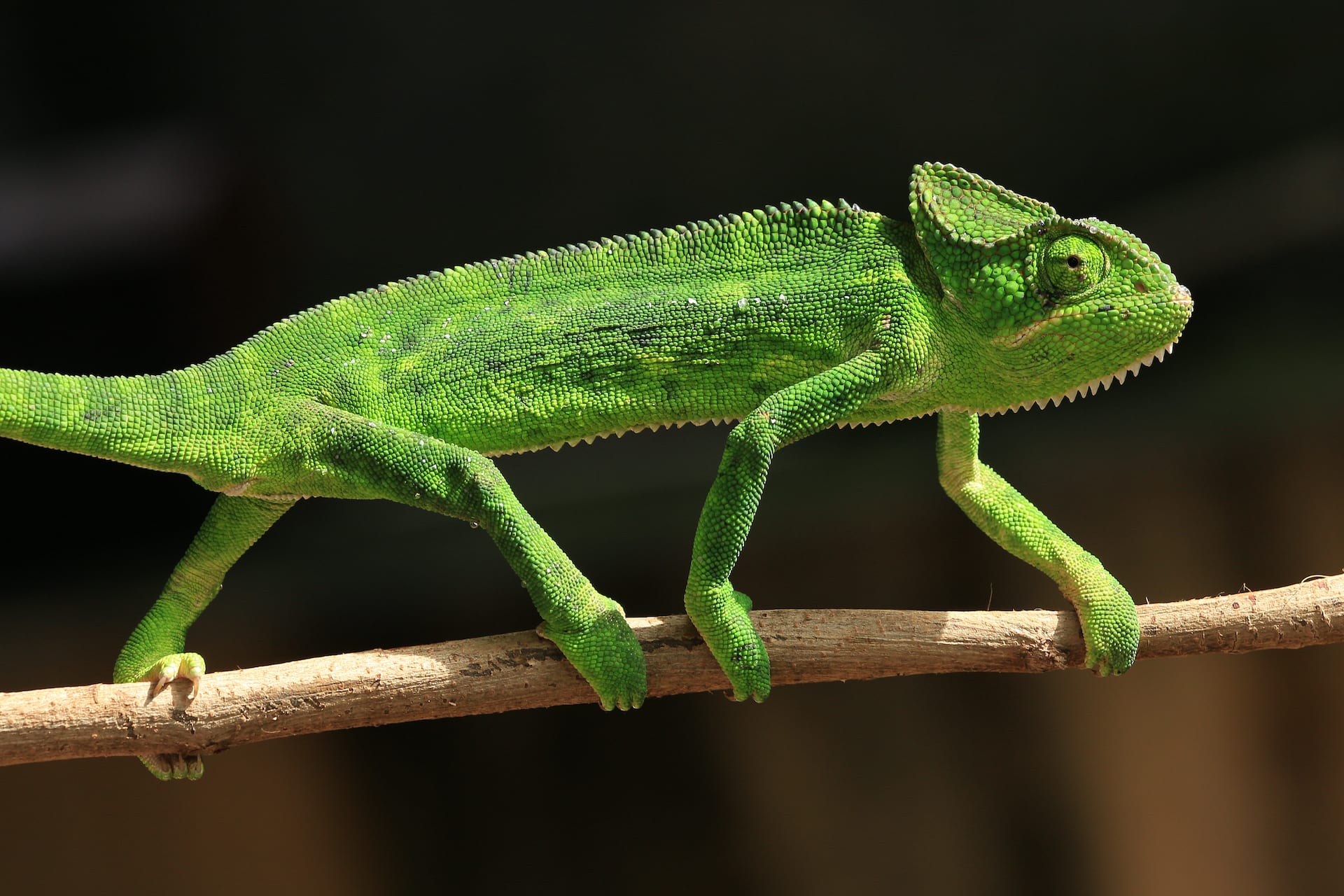 The Asian chameleon can change its colours from black to light yellow with greens, yellows, and browns in between. Photos: Bheru Bishnoi (left), Raman Kulkani (right)

Chameleon eggs have a particularly long incubation period for a lizard that small. They may take up to seven months to hatch! The young dig their own way out of their underground homes and start feeding as soon as they find a good perch. They are tiny replicas of the adults and feed on small flies, crickets, and anything they can capture and overcome. Can you imagine a chameleon half the size of your little finger?

In a matter of days, the little chameleons are capable of changing colour and they rapidly become experts at merging into the background. However, camouflage isn’t the only reason a chameleon changes colour. Mood is the other major reason. The mechanism of how they change colour itself is truly amazing.

The outermost layer of a chameleon’s skin is pretty much transparent, and it has numerous layers of skin below this with each layer possessing cells called chromatophores with different pigments in them. When the chameleon needs to change colour, its nervous system tells certain chromatophores to expand, blocking off the others and causing light to reflect a different colour. The deepest level of skin possesses melanophores, which, as the name suggests, contain melanin — the brown or black pigment that we possess as well.

Chameleons aren’t active predators, but they need to eat regularly. Although they nibble on vegetation occasionally, they primarily feed on insects. This means they need a high density of bugs around them. The advent of pesticides and intensive monocultures has hit them hard.

Fragmentation and loss of habitat, pollution, and getting run over by vehicles on roads, as seen here, are some of the greatest threats to the species. Photo: P Jeganathan, CC BY-SA 4.0

The consequences of the chameleon’s highly specialised adaptations are that changes affect the species harshly. Just about five years after I saw that first wild chameleon, I couldn’t find them anymore. A combination of intensive farming (with pesticides and fertilisers), the conversion of thickly vegetated hedges into walls with barbed wire, buildings, and development projects have caused local extinctions all over our country.

With rampant and unmonitored development, species like chameleons face almost certain extinction in massive regions. Their survival might be limited to tiny pockets with little hope of genetic diversity. If this species, once common in expansive habitats, goes extinct, how will this affect us? Who knows? But, to paraphrase Douglas Adams, at the very least, our world would be a lesser place without them.