The most widely distributed of hornbill species in India, this fruit loving bird can often be spotted in the middle of a city 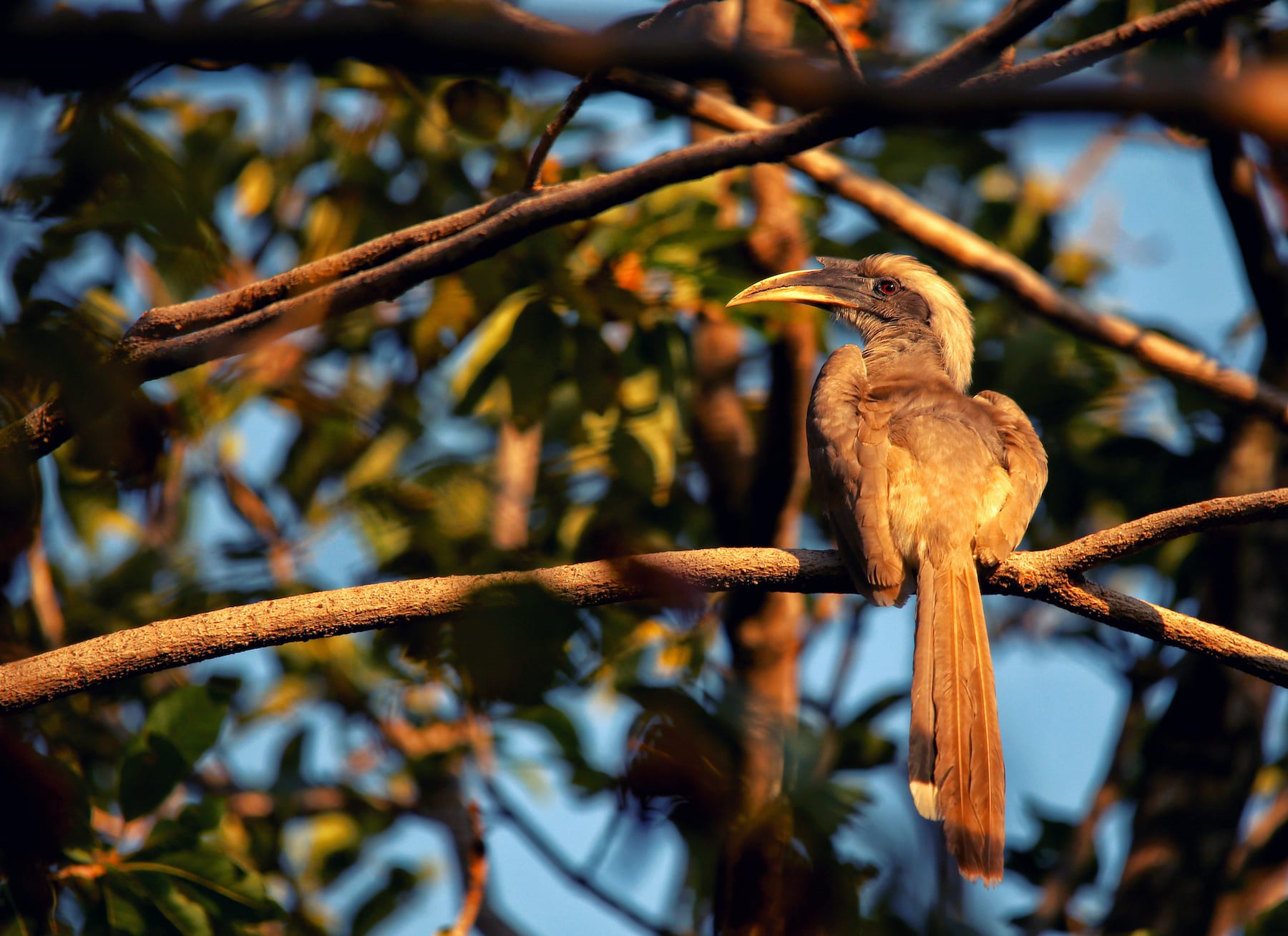 Birding on the Maharashtra coast in winter is always rewarding. One pleasant winter morning, I was watching flocks of gulls and plovers that migrate here from temperate regions. The interactions between the gulls, Brahminy kites, terns and the occasional white-bellied sea eagle were captivating as they employed different strategies and flight manoeuvres to catch fish. Gulls flocked together while Brahminy kites and terns stole fish from each other. The race between shore birds like plovers and sandpipers to grab marine invertebrates that get washed onshore with the receding tide appeared funny and animated. While I was engrossed in the dramatic chase scenes of these piscivores flying over the water and the waders running on the shore, I heard a squeal and call from the coconut trees behind me. I turned around to find the source of a shrill, piercing call, and there it was — a dull coloured, slender bird with a large beak — an Indian grey hornbill.

To me the Indian grey hornbill (Ocyceros birostris) has a rustic charm. Unlike the eight other hornbill species found in India, the Indian grey hornbill is not brightly coloured. Instead, it has an ashy, silvery-grey body, with long tail feathers that end in a band of white. This hornbill has a curved ivory-coloured beak that is long, blackish at the base, and has a sharp, narrow protruding casque. Male and female birds look very similar, though the female is slightly smaller and has a less prominent casque. Adults have red eyes and the skin around the eyes is grey, while juveniles have brown-orange eyes with reddish-orange skin around. Next time you see an Indian grey hornbill, notice their beautiful eyelashes. I especially love to watch it in flight when it beats its wings for a short while and then glides, and almost dives into a fruit-laden fig tree.

The Indian grey hornbill grows up to half a metre long and is the second smallest of all hornbill species in India. Its call is peculiar, loud, and piercing, and its squeals — a series of short “kek-kek-kek” sounds — are difficult to miss.

Among all the hornbill species in India, the Indian grey hornbill is the most widely distributed. Its range spans the length (Jammu to Kerala) and breadth (Rajasthan to West Bengal) of India. The species is also distributed in parts of some neighbouring countries including Pakistan, Nepal, and Bangladesh. It prefers dry plains, foothills, and open habitats, unlike other forest-loving hornbills. It can be seen in deciduous forests, orchards, thorny scrub jungles, gardens, and even in your backyard if you have a fig tree. It may surprise you in the middle of a big city with old trees. 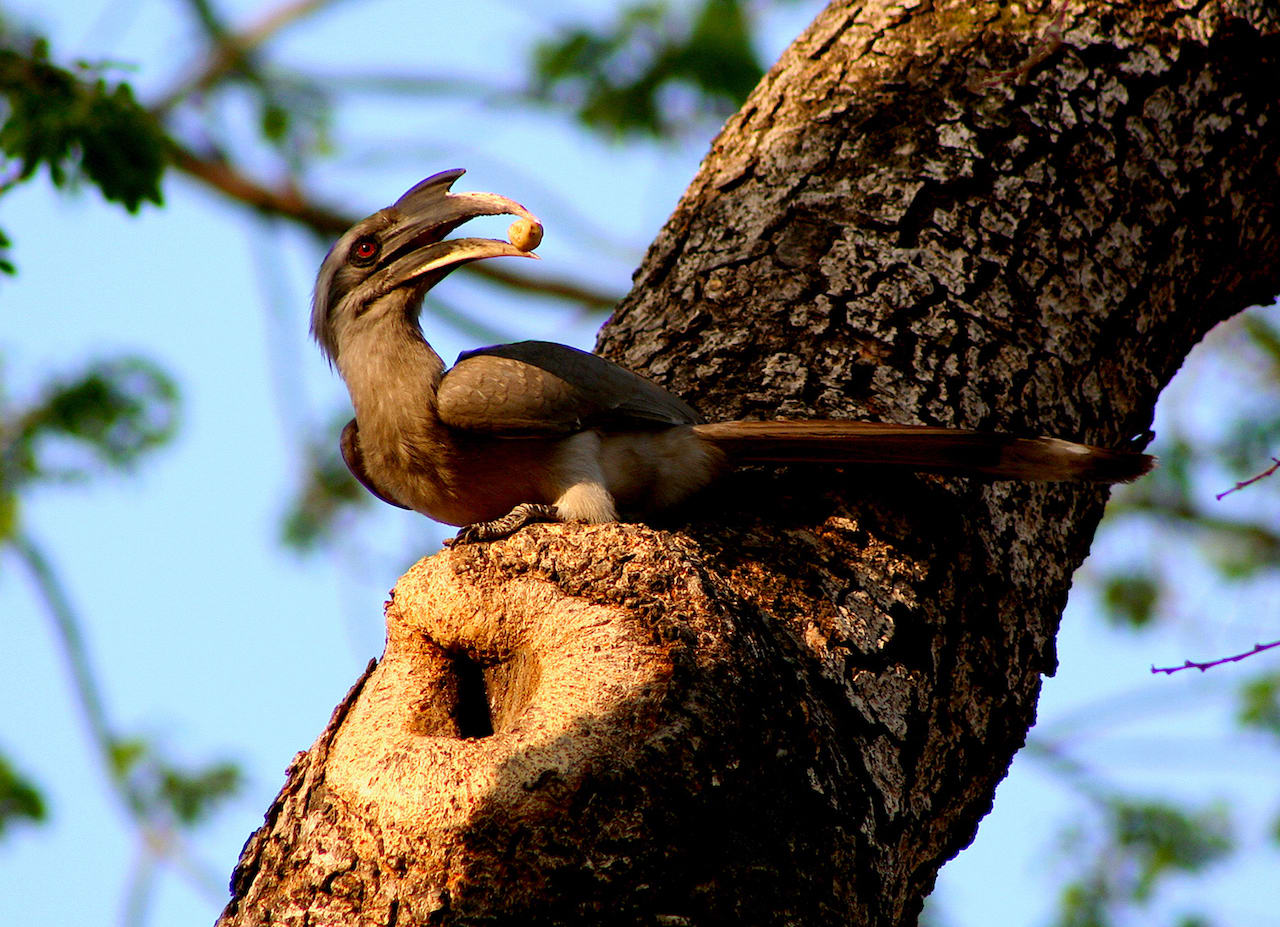 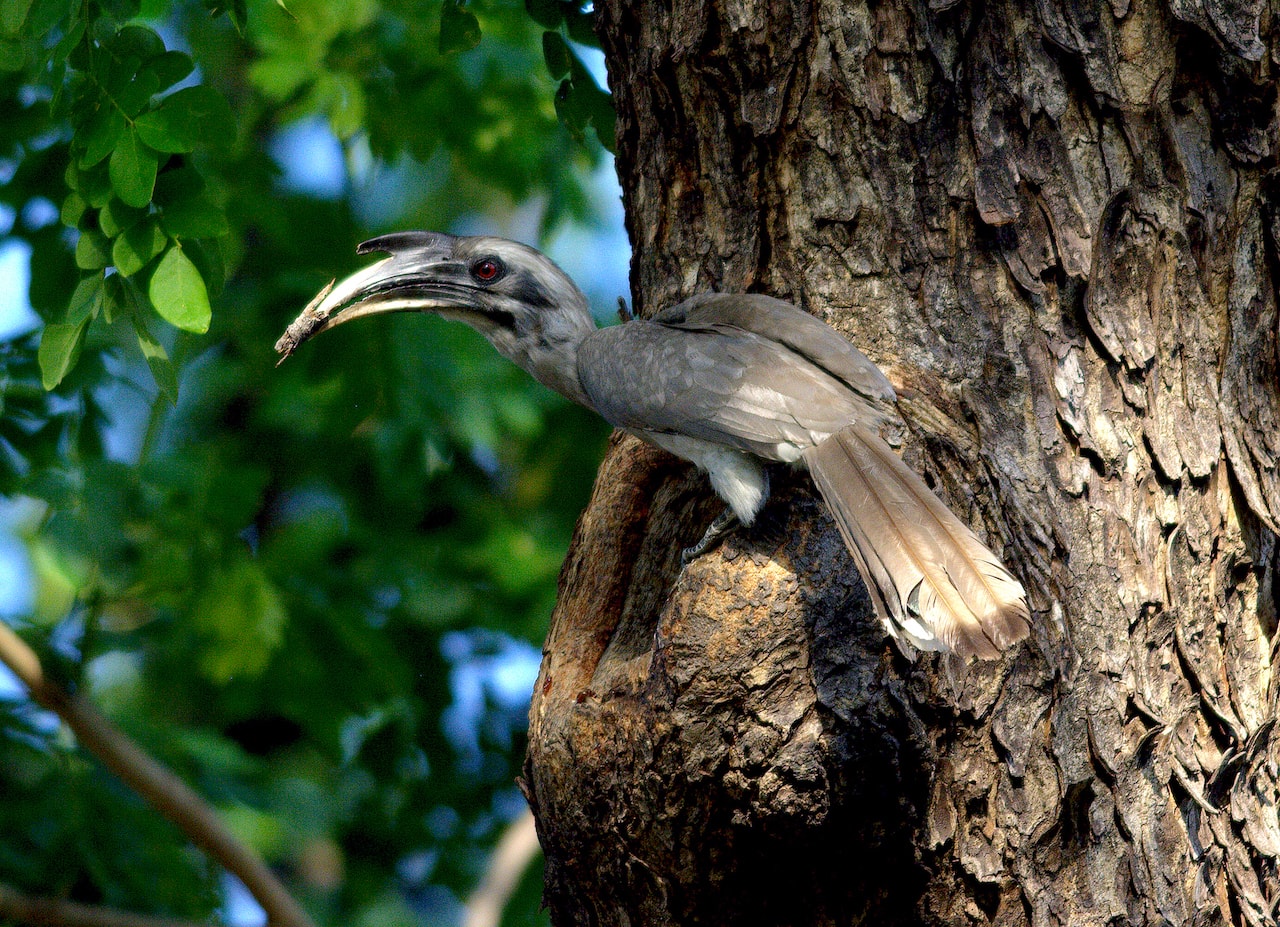 The nesting season of the Indian grey hornbill is between February and June. During this time, the male (seen here in both images) feeds the female, who seals herself in the hollow of a tree. Photos: Raju Kasambe, CC BY-SA 4.0

Small cavities on trees serve as a nest for a pair of breeding Indian grey hornbills. Hornbills rely on existing holes in trees because they cannot build their own nests or dig up cavities. They seem to be quite adaptable when choosing a nest cavity. Their nests can be seen on a range of trees which have cavities, from tall thin coconut trees to large raintrees or mango trees. I was surprised to also see them regularly using artificial nest boxes fixed up on trees. Recently, there have been increasing instances of hornbills using holes in buildings for nesting. I think it is a signal for humans in cities to protect trees in their concrete jungles.

Indian grey hornbills feast on ripe fleshy figs and juicy berries. They are fruit-lovers but also feed on a variety of animals — from insects, to reptiles and rodents. The huge old fig trees along the roadsides in some cities are a favourite stopover for them in the fruiting season. They also feed on jamun, ber and neem fruits, and berries of the false Ashoka trees which are common trees along fences in urban gardens. It amuses me when I see them feeding on the papaya fruit near my house. They are active hunters too, going after lizards, frogs and mice, and also preying on young chicks from other birds’ nests. Indian grey hornbills are mostly seen in pairs, but also seen in small flocks when there is a fruit party on a banyan tree. 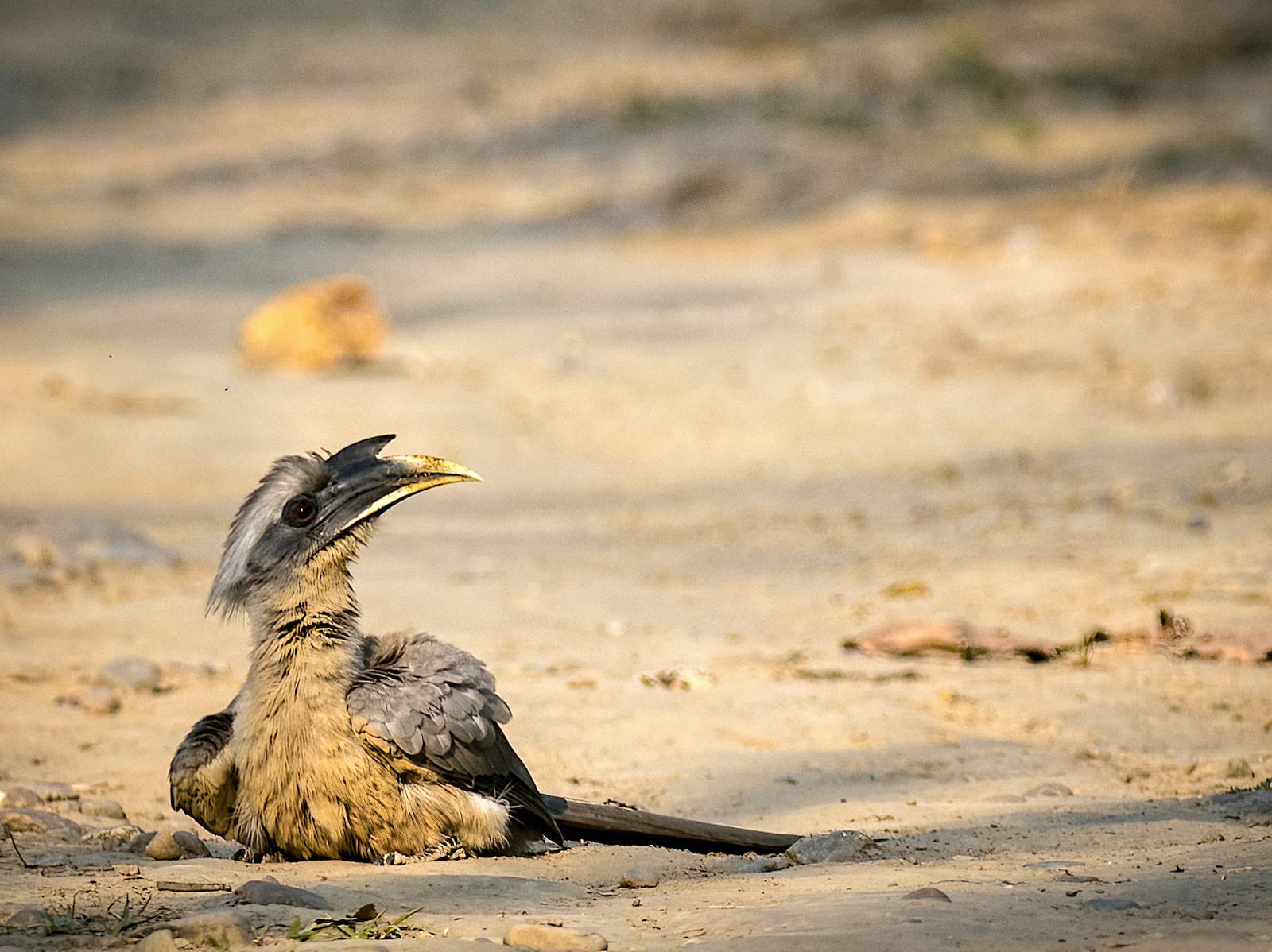 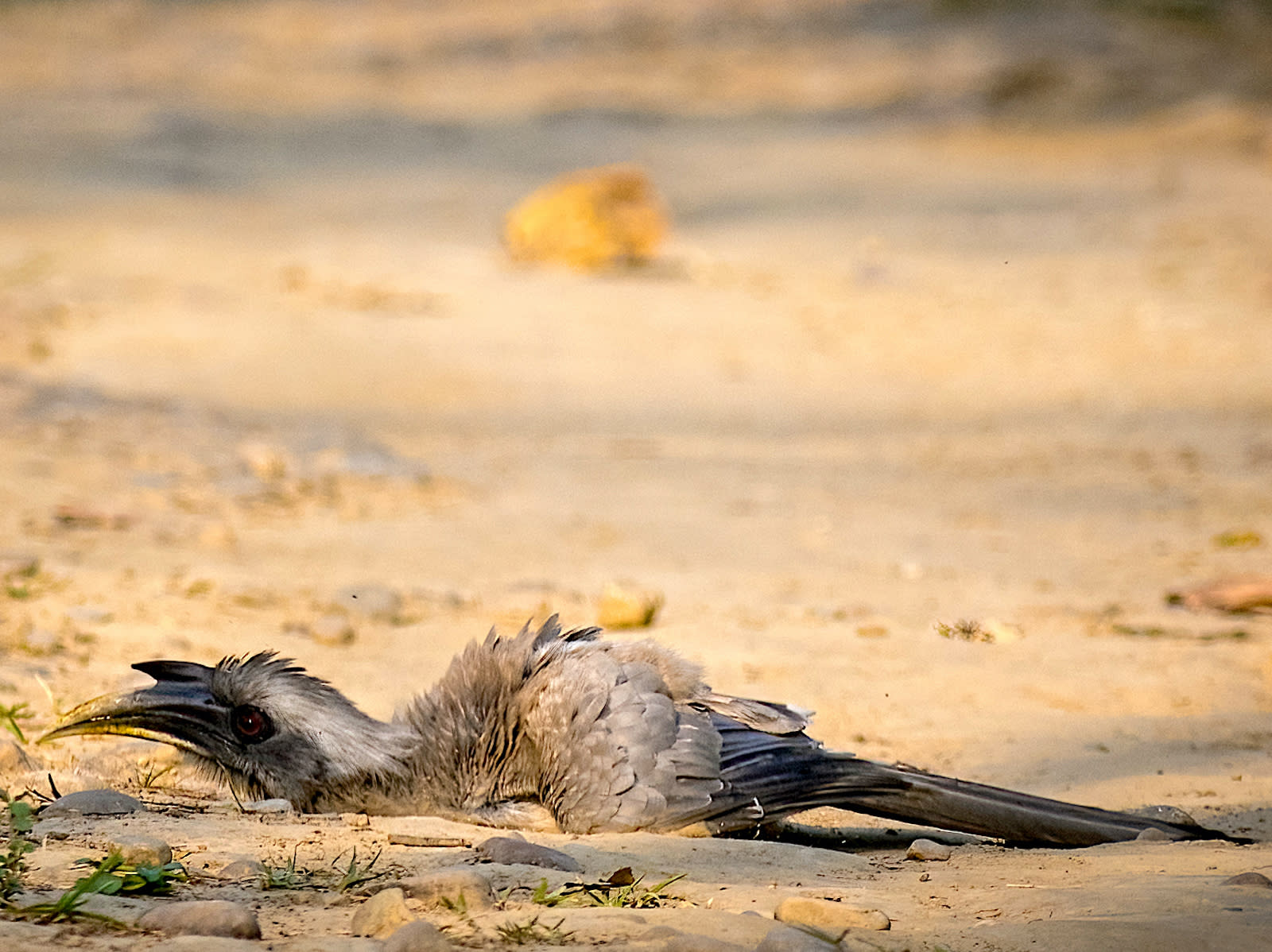 Dustbathing removes the excess oil from the hornbill’s feathers, keeping them in top condition. It also helps get rid of parasites. Photos: Arpan Saha

These birds are nature’s green engineers in the true sense. They play an important role in dispersing seeds of various trees across large spaces. As urbanisation increases, frugivores and dispersers such as Indian grey hornbills are of utmost importance in ensuring the natural cycle of trees in urban spaces. Though widely distributed in India, the Indian grey hornbill faces many threats. The foremost threat is the loss of trees for nesting and foraging. The species is adapting to eating exotic fruits and has even succumbed to human-assisted food such as chapati and savoury fried snacks but that is no excuse to degrade their natural habitat any further. Their continued presence indicates the quality or health of our surrounding environment and we should protect them for our own betterment. In fact, we have an opportunity to make our urban spaces friendly for such species by planting their food plants in our surroundings. 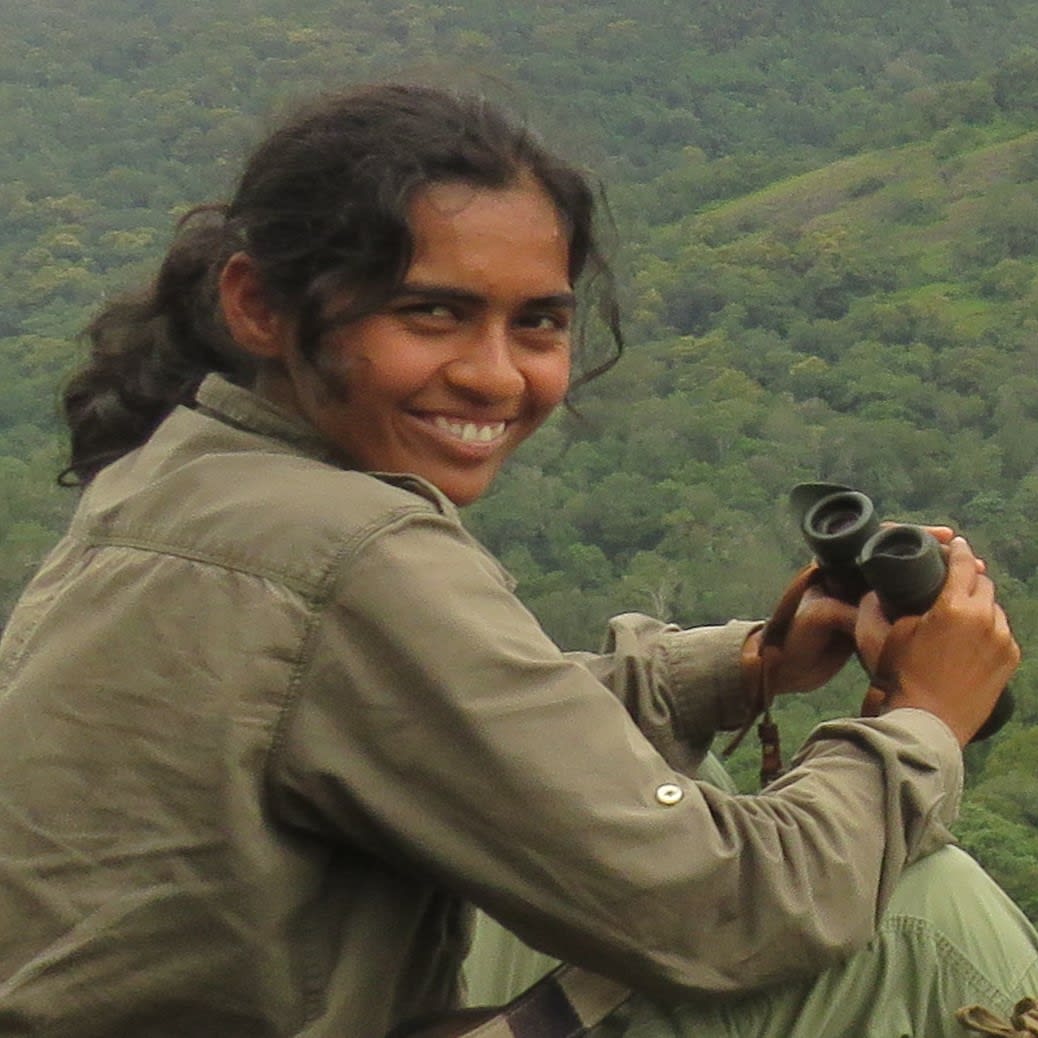 is a wildlife biologist and has been studying hornbills since 2015. She is trying to understand impacts of large-scale habitat modifications on wildlife using hornbills as a focal group.